THIS STORY HAS BEEN FORMATTED FOR EASY PRINTING
Pasi Sahlberg

How one of the world’s top educational performers turned around 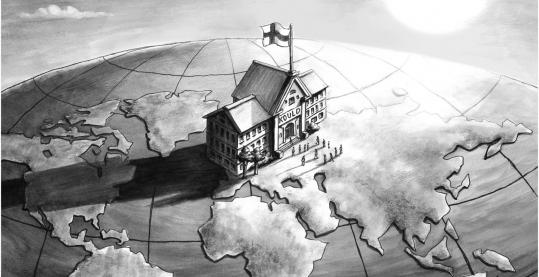 (Gabriel Polonsky for The Boston Globe)
By Pasi Sahlberg December 27, 2010

IF AMERICANS harbored any doubts about their eroded global edge, the recent release of the Organization of Economic Cooperation and Development’s fourth international comparison of educational performance should rattle the nation from its “We’re No. 1’’ complacency. The latest Program for International Student Assessment study revealed that, although the United States made some modest gains, it is lagging behind many other developed nations in the ability of its 15-year-olds. The country isn’t flunking: like France, England, and Sweden, learning here has stagnated at below-average levels. That “gentleman’s C’’ should be a call to change course.

Take heart. Finland, one of the world’s top educational performers according to the last PISA study and a recent McKinsey report, was once in a similar slump and can offer lessons for the United States and others seeking a cure for poor public schools.

As recently as 25 years ago, Finnish students were below the international average in mathematics and science. There also were large learning differences between schools, with urban or affluent students typically outperforming their rural or low-income peers. Today, as the most recent PISA study proves, Finland is one of the few nations that have accomplished both a high quality of learning and equity in learning at the same time. The best school systems are the most equitable — students do well regardless of their socio-economic background. Finally, Finland should interest US educators because Finns have employed very distinct ideas and policies in reforming education, many the exact opposite of what’s being tried in the United States.

Finland has a different approach to student testing and how test data can or should not be used. Finnish children never take a standardized test. Nor are there standardized tests used to compare teachers or schools to each other. Teachers, students, and parents are all involved in assessing and also deciding how well schools, teachers, or students do what they are supposed to do. Politicians and administrators are informed about how well the education system works by using sample-based learning tests which place no pressure on schools, and by research targeted to understand better how schools work. Parents and politicians think that teachers who work closely together with parents are the best judges of how well their children are learning in schools.

Another difference is that Finland has created an inspiring and respectful environment in which teachers work. All teachers are required to have higher academic degrees that guarantee both high-level pedagogical skills and subject knowledge. Parents and authorities regard teachers with the same confidence they do medical doctors. Indeed, Finns trust public schools more than any other public institution, except the police. The fact that teachers in Finland work as autonomous professionals and play a key role in curriculum planning and assessing student learning attracts some of the most able and talented young Finns into teaching careers.

Educational leadership is also different in Finland. School principals, district education leaders, and superintendents are, without exception, former teachers. Leadership is therefore built on a strong sense of professional skills and community.

Many Americans may doubt that Finland, with its homogeneous population, has much relevance to the United States. However, due to growing immigration, ethnic and cultural diversity is increasing in Finland.

The secret of Finnish educational success is that in the 20th century Finns studied and emulated such advanced nations as Sweden, Germany, and the United States. Finns adopted some education policies from elsewhere but also avoided mistakes made by these leading education performers.

What could the United States learn from the Finns? First, reconsider those policies that advocate choice and competition as the key drivers of educational improvement. None of the best-performing education systems relies primarily on them. Indeed, the Finnish experience shows that consistent focus on equity and cooperation — not choice and competition — can lead to an education system where all children learn well. Paying teachers based on students’ test scores or converting public schools into private ones (through charters or other means) are ideas that have no place in the Finnish repertoire for educational improvement.

Second, provide teachers with government-paid university education and more professional support in their work, and make teaching a respected profession. As long as teachers are not trusted in their work and are not respected as professionals, young talent in the United States is unlikely to seek teaching as a lifelong career.

Finally, with the fourth PISA study again showing that the US education system is lagging those in many other countries, Americans should admit that there is much to learn from these systems. Relying on one’s past reputation is probably not the best approach for transforming an educational system to meet tomorrow’s needs and challenges. With America’s “can do’’ mentality and superior knowledge base in educational improvement, you could shift course before it’s too late.

Pasi Sahlberg is director general of the Center for International Mobility and Cooperation at Finland’s Ministry of Education and Culture and is a former Washington-based World Bank education specialist.