An Irish form of agony 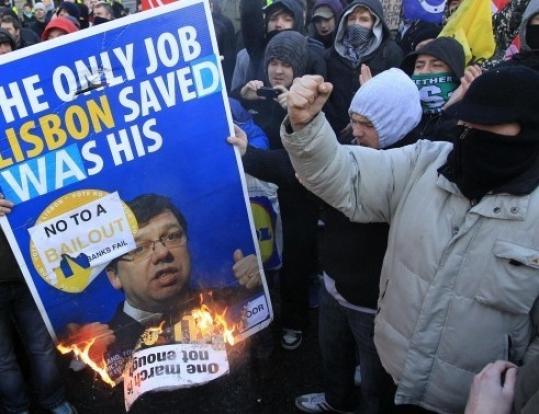 ‘THERE’S NO point in being Irish if you don’t know the world is going to break your heart eventually,’’ Daniel Patrick Moynihan observed at the assassination of President Kennedy. He added, “I guess we thought we had a little more time.’’

Moynihan’s remark might have seemed even then like an overindulgence of melancholy, yet it now captures the Irish mood as the island nation faces near-insolvency. How could we Irish ever have imagined that we were free of the doom of our fate-laden history? Loving our ride on the back of the Celtic Tiger, we just didn’t expect to be thrown off so soon. Now the tiger, even here in the diaspora, seems poised to eat us.

The economic collapse has spawned what the Irish finance minister last week dubbed “the worst crisis in our history.’’ He may have been thinking only in terms of economics, but even so it is an extraordinary assessment, given the long, sad story of Irish deprivation. A protester in Dublin decried the brutal austerity measures that would “turn the working people of this country into serfs.’’ Yet only yesterday serfdom was the near universal condition of the Irish nation. The epic 19th-century famine, which cut the population in half through death and emigration, can be said to have ended only in 2005, which is when the population finally returned to the level of 1861. Emigration was finished at last. The boom was on, and Ireland banished melancholy for the first time ever.

Recriminations abound now that the financial bubble has burst, with the banking sector and a regulation-averse government coming in for brutal criticism. Property speculators could be demonized, yet their numbers were vast. Unemployment reached record levels. Strikes and protests multiplied. Emigration once more became a mark of survival.

Though an international economic collapse sparked such catastrophes elsewhere, the downturn seemed more savage in Ireland. And how could it not? If any people should have known better than to trust the shallow promises of easy money, wasn’t it the Irish? A mood of grim introspection has settled upon the people themselves now. Underneath the sheen of prosperity, wasn’t a corrupting decadence lurking? All along, weren’t there warnings of the coming heartbreak? What’s the point in being Irish if you forgot that?

Perhaps alone among nations, Ireland is liable to understand its grim situation in expressly moral terms. After all, the loss of faith in the recently embraced cult of affluence has come hand in glove with a far deeper crisis of belief in the religion that, until now, had braced the Irish through all previous suffering.

The Murphy Report of 2009, the government investigation into the abuse of children by religious figures, both priests and nuns, was like a scream from the depths of the Irish unconscious. It wasn’t that the government-credentialed Catholic system of parishes, schools, and orphanages was abusive; rather, as someone observed, abuse was the system. When the total and ongoing complicity of the church hierarchy was exposed, the Irish were stripped of any way to locate themselves in the cosmos. And finally it was clear why the quasi-religious embrace of financial gain had so thoroughly taken over the inner life of the nation. Money smoothly replaced a worship built on lies and violence, however cloaked in piety and devotion. Before the world broke the Irish heart, the church did.

What sent the now-burst Irish bubble soaring was the moral and political breakthrough of the 1998 Belfast Agreement — a world model for peace. In the Catholic south, that involved the renunciation at last of the ancient Reformation feud, and of the Republic’s claim to the whole island. (Noting the 94-percent approval vote, the critic Declan Kiberd asks when “has any other nation-state in modern history so voted to reduce . . . its territorial claims?’’). Irish melancholy was promptly sent into exile, setting the people free from the prison-like vale of tears — the colonial legacy, the famine ghosts, the ethnic hatred, all of it. The boom was on.

Yet in that the greatest political accomplishment in the nation’s history, also known as the Good Friday Agreement, the warning was already plain, for Ireland’s contemporary rebirth occurred on the day of the death of God. No matter what we do, the Irish condition is bound to tragedy. Moynihan was right.