A justice’s blind eye to the truth 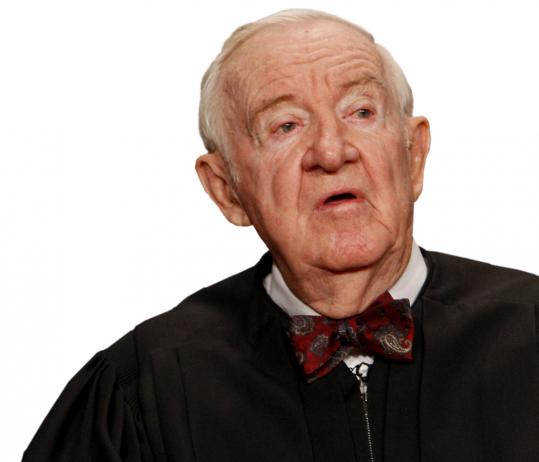 I’M NOT a regular reader of The New York Review of Books, but I wasn’t going to miss newly-retired Supreme Court Justice John Paul Stevens’s essay on capital punishment in the latest issue. Last Sunday, The New York Times spotlighted the Stevens article as a “remarkable’’ piece of writing that finally settled a “legal mystery’’ — namely, why Stevens had changed his original view on the death penalty, and announced in 2008 that he now considered it to be unconstitutional.

Whether Stevens’s metamorphosis was really such a “mystery’’ is debatable. A moderate Republican when he was appointed by President Ford in 1976, Stevens had long since migrated to the other side of the ideological divide. By 1994, to quote The New Yorker’s legal-affairs writer Jeffrey Toobin, Stevens had “become the undisputed leader of the resistance against the conservatives on the Court.’’ Capital punishment was just one of many issues — racial preferences, gay rights, free speech, church/state separation — on which Stevens came to champion staunchly liberal positions. Well before the 2008 concurrence in which he proclaimed the death penalty to be a violation of the Eighth Amendment in all cases, his growing opposition to executions was evident.

That opposition is restated in Stevens’s new essay, a mostly positive review of a new book, “Peculiar Institution: America’s Death Penalty in an Age of Abolition’’ by David Garland, a professor of law and sociology at New York University. In his study, Garland cites the opinion of “many commentators’’ who “view contemporary capital punishment as a continuation of the nation’s history of racial violence and lynching’’ — an inflammatory view with which Stevens appears to concur. The former justice echoes that language in writing about the 1987 case of McCleskey v. Kemp, a 5-to-4 decision in which the court upheld a murder conviction and death penalty even though academic research proved that sentences of death were more common when the murder victim was white.

“That the murder of black victims is treated as less culpable than the murder of white victims,’’ Stevens writes bitterly, “provides a haunting reminder of once-prevalent Southern lynchings.’’

It is a passionately held article of faith among death-penalty opponents that capital punishment is racially unjust. But the facts stubbornly say otherwise. Ever since the Supreme Court compelled the states to rewrite their death penalty statutes in the 1970s, white murderers have been more likely than black murderers to be sentenced to death, and more likely to actually be executed. Though blacks commit approximately half of all murders in the United States, they accounted for only 390, or 35 percent, of the 1,136 murderers executed from 1977 through 2008. (Whites made up 57 percent; the rest were Hispanic, Asian, or American Indian.)

The race-of-the-victim claim that so appalls Stevens collapses under scrutiny. The Washington Post’s Charles Lane — an admirer of Stevens, as it happens — shows why in a new book of his own. Because the vast majority of the murderers who kill blacks are black themselves, he writes in “Stay of Execution: Saving the Death Penalty from Itself,’’ the fact that the murder of a black victim is less likely to be punished with death is another way of saying that fewer blacks are put to death by the state. That reflects not racism, but racial progress.

It isn’t because prosecutors place a lower value on black life that they are more reluctant to seek the death penalty for black-on-black homicide, Lane explains. It is because prosecutors don’t press for a punishment of death unless they think the jury can be convinced to support it. And in the largely black communities where most black-on-black crime is committed, “persuading a jury to sentence a defendant to death is relatively difficult.’’ Similarly, “in jurisdictions where elected prosecutors must appeal to black voters, prosecutors are that much less likely to support capital punishment.’’

In short, says Lane, far from harking back to the awful era when legally powerless black Americans were murdered by lynch mobs, the race-of-the-victim disparity today shows how blacks have been empowered. Before the Civil Rights revolution, most blacks couldn’t vote or serve on juries. “Now that they do, they appear to be using this power to limit capital punishment in the cases closest to them.’’

Reasonable people have disagreed about the death penalty for a long time, but there is nothing reasonable about smearing the modern capital-justice system as inherently racist. Stevens changed his mind on the death penalty, but most Americans continue to regard it as a legitimate tool of justice. To imply that there is a whiff of the lynch mob in their view may make a good story for the Sunday paper. It doesn’t make a convincing argument.