THIS STORY HAS BEEN FORMATTED FOR EASY PRINTING
Claudia M. Gold

By the book, but breaking a bond 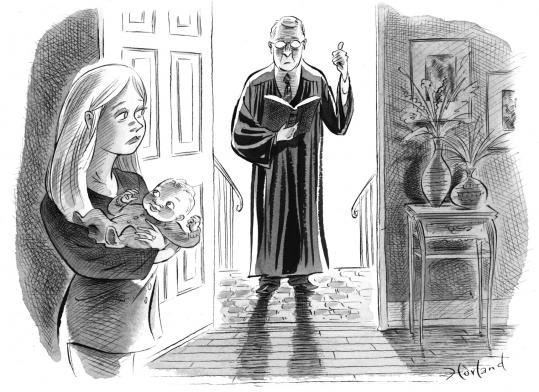 IT IS not until about eight weeks of age that an infant has a fully developed capacity for mutual gaze. Then an infant looks directly into his mother’s eyes. She, in turn, reflects back this loving gaze, cooing softly in response to her baby’s earliest communication. When a mother looks at a baby in a way that communicates with him, not with words but with feelings — “I understand you’’ — he begins to recognize himself, both physically and psychologically. He begins to be able to regulate his feelings. This mutual gaze, literally and figuratively being “seen,’’ actually facilitates the development of the baby’s brain.

The Massachusetts Supreme Judicial Court now has proposed to interrupt this newly emerging dance of co-regulation by its recent ruling that female workers are entitled to only eight weeks of maternity leave. This ruling applies only to women in small firms whose maternity leave falls under state law, and differs from the wiser federal Family and Medical Leave Act of 1993, which provides up to 12 weeks of unpaid leave and job protection for workers in companies of 50 or more.

Research on neuroscience and infant development is offering great insight into how mutual gaze actually grows the brain. Our knowledge about early brain development is derived from a combination of video observations of mother-infant interaction and studies of the brain known as functional MRI. These imaging studies can see which parts of the brain are responsible for what behaviors. This research has shown that healthy wiring of the brain is contingent on the attuned responses of caregivers. This attunement is not only in gaze but in touch, sound of voice, and facial expressiveness.

When a baby is born, the amygdala, the lower center of the brain that responds to fear and stress, is fully formed. The amygdala is referred to by trauma researcher Bessel van der Kolk as the “smoke alarm of the brain.’’ It connects directly to the hypothalamus, which in turn connects directly with the parts of the body, like the adrenals, responsible for the release of hormones that lead us to experience the physical sensations of stress.

At about two months of age, another part of the brain known as the medial prefrontal cortex begins to develop. It serves to regulate and control the smoke alarm. When a mother engages in the dance of co-regulation with her baby, she is wiring his brain, helping the fibers of the prefrontal cortex to grow, and — in the words of therapist Francine Lapides — hug the amygdala. The prefrontal cortex continues to develop well into a person’s 20s. An infant’s brain, however, doubles in weight in the first year of life. A lot of wiring goes on in the third month.

When these connections are not well developed, intense emotions are not regulated. In the face of difficult feelings a person may be flooded with stress hormones. He may become overwhelmed by feelings of rage, anxiety, or sadness.

Using MRI, Hilary Blumberg of Yale has found that adolescents with bipolar disorder have structural abnormalities in the amygdala and underdeveloped prefrontal cortex. She points to hopeful research using medication to rewire the brain to treat the emotional dysregulation characteristic of the disorder.

This is not to say that stressed early relationships inevitably lead to psychopathology. But doesn’t it make sense to do all that we can to ensure that brains are wired well in the first place?

Important changes happen not only in an infant’s brain but also in a mother’s brain in her baby’s third month of life. When a mother sees her loving gaze reflected back at her from her baby, she develops a sense of competence. This trust in herself is critical in helping her face the many challenges ahead in her role as parent.

Certainly a mother who works full time is well able to facilitate her child’s healthy development if she is receiving appropriate support. But even under the best of circumstances, returning to work means that a mother will be stressed. Offering her the option for a full three months of what D.W. Winnicott, pediatrician turned psychoanalyst, referred to as “primary maternal preoccupation’’ seems an important and wise investment in the next generation.