THIS STORY HAS BEEN FORMATTED FOR EASY PRINTING
Dan Payne

In auditor’s race, Glodis shows just what kind of a guy he is 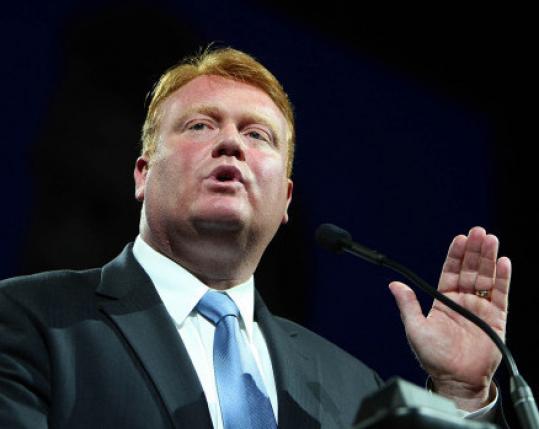 IN THE state auditor’s race, the two top Democrats appear on paper to be similar. Both are former state representatives and both have run large public agencies. Suzanne Bump was secretary of labor under Governor Deval Patrick, and Guy Glodis is the sheriff of Worcester County. A third candidate, Michael Lake, runs a fledgling program at Northeastern University that looks to share ideas among city governments around the world.

Vive la différence. Bump and Glodis are quite different on issues. Glodis lost the Democratic convention nomination in May when he was shown to be on the wrong side of nearly every liberal issue — gay rights, the death penalty, gun control, taxes, and diversity.

Bump, in the Legislature and as labor secretary, was a reformer and won praise for modernizing and streamlining a state agency that is many times larger than the auditor’s office.

The shady loan. Ethics is the distinction between them. Glodis has had to defend himself against stories in the Globe that showed that he had illegally taken and hid the source of a $22,000 personal loan originally made by a friend, a hedge fund manager who has since gone to jail for bilking millions from his clients. Just days after getting that loan, Glodis made a $20,000 personal loan to his campaign. He says the two are unrelated. Yeah, sure.

Sheriff as outlaw. Glodis has a close relationship with the Office of Campaign and Political Finance, which polices how candidates handle political money. In 2009, the agency ordered Glodis to pay $9,970 in fines for unlawfully depositing 34 money orders worth $5,770 into his campaign account, and for illegally accepting 12 corporate contributions totaling $2,600.

For depositing $1,400 in campaign checks into his personal account, the agency fined him $1,000. Not learning his lesson, this year he was ordered to repay the sheriff’s office $674.69 for a political mailing printed at taxpayer expense.

No auditing experience, but has been audited. Outgoing Auditor Joe DeNucci’s office found that Glodis gave out more than $74,000 in no-bid contracts for consultants. The Worcester Telegram & Gazette revealed that 21 of the 29 officers who were promoted in the sheriff’s department had made campaign contributions to Glodis.

Too boorish for St. Patrick’s breakfast. Glodis was told not to come back by organizers of the annual South Boston St. Patrick’s Day Breakfast for his tasteless, boorish jokes. He made fun of Mayor Tom Menino’s appearance and speech and made crude “jokes’’ about women, homosexuals, and the height of Robert Reich, the former US secretary of labor.

Glodis tries to tar Bump. For months Bump has posted on her campaign website that when she was a state representative two decades ago, she let an insurance lobbyist buy her dinner and give her theater tickets, for which she agreed to pay a $600 fine. But Glodis is now trying to create moral equivalence between his many serious violations and Bump’s one-time, minor act of poor judgment.

Bump outgunned 4-1. Bump got a $100,000 bump in public funds (the state provides money to candidates who agree to abide by spending limits.) She’s running nearly $200,000 in radio ads; plus she’ll get help from Patrick’s political organization — she was his political director four years ago. But the auditor’s primary won’t get much news coverage, so spending on advertising in the final days could be crucial. Glodis has a war chest of nearly $800,000 and a sizable political base in Worcester County. He could just buy the thing.

Lake diving. The third Democrat, Michael Lake, claims he “ran day-to-day operations’’ in the Clinton White House while still in college. Who knew? With $58,000 in state funds, he could take just enough reform votes to sink Bump and give Glodis the nomination. A new independent poll shows Bump and Glodis virtually tied and Lake way back. They’re all unknown.

Glodis forecasts “reign.’’ The front of a new Glodis mailer has a colossal Freudian slip in the headline. He promises to “reign [sic] in wasteful political spending.’’ If enough voters blank the primary Tuesday, vote for Lake, or go with a Guy whose name is familiar, we could see a rain of corruption stories.

Dan Payne is a Boston-based media consultant who has worked for Democratic candidates around the country. He also does political analysis for WBUR radio.