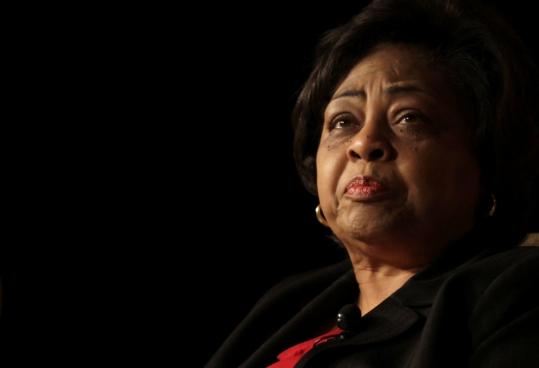 OF THE many ironies that continue to astound Shirley Sherrod, the most urgent is how the firing line was so white from the administration of the first African-American president.

“One of the hard things I found out, when they were dealing with me, was that there was no person of color in the inner circle who talked to me to hear my story or whom I could talk to,’’ said Sherrod, the Department of Agriculture’s director of rural development in Georgia who was fired for false charges of reverse racism.

She found a similar situation at USDA itself. In an interview with columnists and reporters at the National Association of Black Journalists convention, she said that about 15 percent of USDA’s Georgia employees are black in a state that is 30 percent black. They are mostly in lower-grade, lower-paid positions. She said Agriculture Secretary Tom Vilsack has pledged changes, “but I don’t know how you do it without black people in your inner circles,’’ she said. “The question has to be asked, where is the real commitment?’’

It should give Obama pause that this question comes from Sherrod. She was maligned by conservative blogger Andrew Breitbart, who posted online a speech snippet that made her seem insensitive to a poor white farmer. The whole story was one of racial reconciliation in which she helped the farmer. She was quickly fired, then asked to come back when the full story came out.

Sherrod’s rich and tragic 62 years makes it all the more embarrassing for Obama. Her father was murdered in 1965 by white men who were never indicted. Her younger sisters endured cross burnings for integrating schools. Her husband was a courageous civil rights worker who was beaten by an ax-handle-wielding white mob. The family home was shot into and the Sherrods lost their own farm to discriminatory loan practices. All that also makes it, in her words, “unbelievable’’ that the national NAACP at first joined the chorus condemning her.

She said if someone with her history can be treated as if she had no history at all, the Obama administration risks being oblivious to real racial rot. As the right screams about imaginary injustices to whites, ripped-off black farmers are still losing land. The Obama administration supports $1.2 billion in final payments to address historic USDA discrimination, but the Senate still has not approved the funds. She said the country is still on a path “where we may not have any black farmers left.’’

Sherrod said that Obama “is dealing with a lot and he has tended to shy away from social and racial issues. He cannot attend to all of them, but some issues are just so real, they cannot be ignored. We don’t have to revisit the whole history of this country, but he has to face real issues of racism that are still here if he is going to move this country forward.’’Obama and Vilsack have apologized to Sherrod, but she remains undecided on accepting a new advocacy and outreach job at the USDA. She wants to determine if the post will be funded enough to help her assist oft-forgotten small farmers. Also, it is not clear how much Obama has learned or wants to continue to learn from this episode.

This week, Obama said Sherrod’s life story “is exactly the kind of story we need to hear in America.’’ To wit, Sherrod invited him to come to rural southwest Georgia to see the plight of farmers. He has yet to accept. Last year, Obama attempted to quell the furor over the police arrest of black Harvard professor Henry Louis Gates, Jr., and his own reflexive response to it with a White House “beer summit.’’

Asked in a briefing if the Sherrod incident provides the opportunity for Obama to “lead a national conversation on race,’’ White House press secretary Robert Gibbs said that the president doesn’t have to be “the teacher in every teachable moment.’’ The problem for Obama is that Sherrod is a living, breathing teachable moment, the best opportunity yet for him to address rural inequities that still bedevil black farmers and poor farmers.