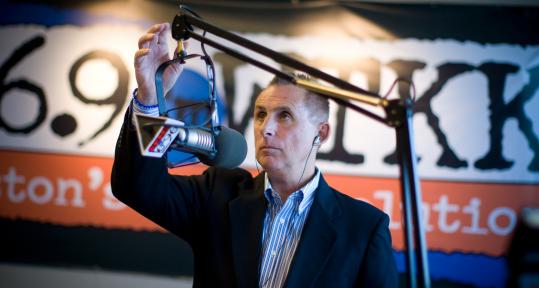 WTKK’s Jay Severin has been added to the list of broadcasters monitored by Media Matters. (Dina Rudick/Globe Staff)
By Scot Lehigh July 16, 2010

IT WAS six years ago, but I remember the exchange as though it were yesterday. After all, how could you forget one of the few happy moments when Jay Severin’s WTKK radio show seemed to produce a little genuine enlightenment?

Enlightenment for Jay, that is. As his long-time listeners know, Severin has advocated bombing this Muslim city or that into a parking lot as a way to fight terrorism. But on that day back in May of 2004, Jay took a call from someone with a more complex grasp of foreign affairs. She herself had once thought we should just drop a nuclear bomb on Iraqi cities where terrorists might lurk, she began. But over time, she continued, she had come to realize that wouldn’t be right, because thousands of innocent people would die as well.

Seeming genuinely appreciative for her call, Jay asked how old she was.

Twelve, she replied. Which is to say, every bit Jay’s contemporary as far as mental age goes.

But as much as I treasure the memory, it’s my sad duty to report that the teachings of his tween tutor didn’t take, for just a few weeks ago, Jay was opining about . . . nuking entire cities to eradicate terrorists.

“I’ll tell you what I do want to turn on the television and see — I mean, I don’t want to, but as an alternative, what’s acceptable to me and preferable to me — is to see a mushroom cloud,’’ he said. “I want to see it over the regions of Afghanistan and Pakistan where we believe the Al Qaeda are hiding, training, and organizing.

“What am I advocating here?’’ he continued. “No more nor less than what the United States of America did in Japan,’’

A disapproving caller promptly pressed for particulars: “So . . . if you were the president and you had intelligence that there were five Al Qaeda operatives in a particular house in a particular city, you would wipe out the entire city?’’

“Yesterday,’’ replied Jay, soon following up that decisive response with a query he obviously considers trump: “If we weren’t going to use these bombs, why did we build them?’’

It made me wish his 12-year-old mentor from 2004 had been listening. In her patient manner, she might have explained to Jay that we were at war with Japan when we dropped nuclear bombs on Hiroshima and Nagasaki, but though we are fighting in Afghanistan, we are not at war with the government of either that nation or Pakistan. Why, in answer to his query about nuclear weapons, she might even have explained the complicated Cold War concept of nuclear deterrence.

But she’d be 18 by now, and has no doubt moved on to more intelligent talk-radio discourse.

Not Jay. Further evidence: His reply to a recent question about the Russian spy ring. After fretting about other spies and subversives who may be operating here, Jay concluded: “If it came out that Teddy Kennedy was one of them, I wouldn’t be shocked. If it comes out that Barack Obama is one of them, I will have been right.’’

In fairness, I should stipulate that Jay prefaced that observation by noting he was “still thinking this one over.’’ And that Jay doesn’t use “thinking’’ in the normal sense of the word, as in exercising powers of judgment, conception, or inference. For him, the term means dredging about in the fever swamp of his imagination for whatever malignant notion dwells there in the muck.

Fairness also compels me to observe that our pixilated pundit has received some new recognition. Media Matters for America, the liberal nonprofit organization that publicizes the unhinged rants of certain right-wing broadcasters, has added our local kook to the list it monitors. And mind you, Media Matters, which drew my attention to Jay’s latest eruptions, doesn’t waste its time on just your garden-variety nutcase, demagogue, or blowhard. You really have to stand out to merit its attention.

So congratulations, Jay. Unlike the Pulitzer Prize you once claimed to have won, this is a distinction you truly deserve.