On the verge of collapse 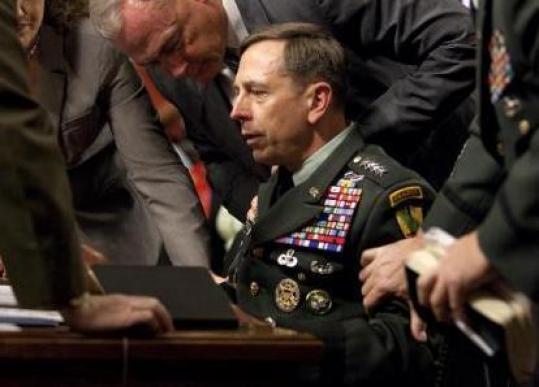 ‘IT WASN’T Sen. McCain’s question,’’ General David Petraeus said. “I just got dehydrated.’’ The head of US Central Command was accounting for the fact that, moments before, while testifying before the Senate Armed Services Committee, he had briefly passed out. Senator McCain’s undisguised skepticism about what he was hearing of the American war in Afghanistan was not the problem. It was explained that Petraeus had not had breakfast. One sensed, even through the televised news reports, a rare spirit of unanimity in the political hearing room — a feeling of embarrassment for the general that led the chairman to immediately adjourn the session.

On the same day, the heads of five oil companies appeared before a House committee looking into the Gulf of Mexico oil catastrophe. The business executives were subject to angry interrogation by members of Congress. That all five companies depended on the same “cookie cutter’’ emergency back-up plan for deep water drilling showed that the notorious incompetence of is the industry standard. Not embarrassment here, but anger. About the most that could be said for the oil company chiefs was that no one fainted.

The two Washington hearings captured the widespread American mood of exhaustion and dread. The nation has been drastically confronted with its impotence on multiple fronts — the stark inability to keep the near ocean from becoming a dead sea or to protect its coastline from being poisoned; the stubborn refusal of the Afghanistan war (like the Afghan leader Hamid Karzai) to follow Washington’s orders; the growing sense that the main outcome of the American effort in Iraq is the empowerment of Iran. When President Obama addressed the nation from the Oval Office he was focused on the oil spill, but the limits of his practical ability to influence essential matters were broadly apparent.

General Petraeus is a contemporary hero. His uniform tunic glitters with 10 rows of military decorations and a like number of badges, tabs, and patches. Widely credited as the Pentagon’s counter-insurgency genius and as author of the Iraq “surge,’’ Petraeus was to lead Afghanistan, too, around its decisive corner. But the Taliban has refused to cooperate with America’s Afghan strategy. In Iraq, with last week’s abortive convening of a stalemated Parliament, amid threats of a renewed Iraqi civil war, signs abound that the “surge’’ was no success after all. An inch below the open skepticism that greeted the general at the Senate hearing is the mounting fear that American troops will be removed from both countries, if ever, not in withdrawals but evacuations. Given Petraeus’s status as the embodiment of contemporary martial hope, it was impossible not to take his momentary fainting spell as an omen. A national breaking point approaches.

At issue is nothing less than the inbred sense of American goodness — a faith on which President Obama himself depended when he first backed both Petraeus, embracing the war, and the self-same oil executives, authorizing expanded off-shore drilling. The president has halted the latter, and must regret the former — but too late in both instances. When a core enterprise of the US economy shows itself, as in the Gulf, to be wantonly destructive, with every citizen complicit in that destruction; when the grief of America’s misbegotten adventures in Iraq and Afghanistan is thwarted by an unending fainting spell of leadership at all levels — the nation’s trust in itself can be irretrievably lost.

Obama is like a rock climber in trouble on a sheer face, extended beyond himself, no ascending hand-hold in sight. But from the Gulf of Mexico to the Persian Gulf, the environmental and military crises overlap to create an urgency which itself defines the next move. Obama must engender a new American consensus. The public debates are familiar enough — energy policy, troop withdrawal timetables — but the context within which they will reach crescendo is unprecedented. Washington pols cavil as ever, oil execs gush the usual denial, and the military brass equivocates on. But the nation itself is in a profoundly different place than last winter, that fickle season of political hope. This summer the American character will show itself for what it has become. So, too, the American president. Now, actually, Barack Obama’s presidency begins. Fainting is not an option.