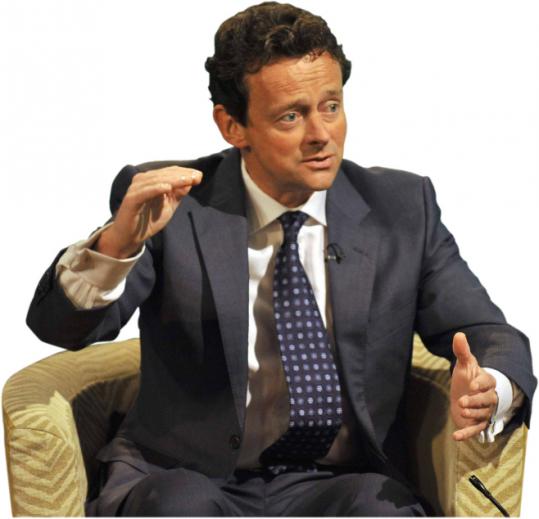 BP chief executive Tony Hayward is certainly due blame, but he isn’t the only one. (Jeff Overs/ Reuters/ BBC)
By Joanna Weiss Globe Columnist / June 8, 2010

LIKE MANY people, I spent a good portion of last week looking at pictures of oil-drenched birds and marveling at the chutzpah of . The company’s ads are contrite on the surface but brazen underneath, filled with images of pristine beaches and industrious volunteers, suggesting that soon, all will be well in the Gulf of Mexico so offshore drilling can start again. Just buck up, America, and have faith! Stiff upper lip and all that.

Pity the birds; hate the company. But I couldn’t help but wonder how much I should hate myself, too. My life, after all, is one giant petroleum glut, from the diapers and diaper rash ointment for my son to the toothpaste in my bathroom to the Lycra in my jeans. Oil gets me to work and back, puts food on my plate, gets pumped into the tank in my basement every winter. Imagining a world without it is next to impossible.

But there are some people who are trying.

Their work is based on the controversial concept of “peak oil,’’ the theory that US oil production reached its apex in the 1970s and global production will reach its high point by 2020. There will still be oil to be had, the theory goes, but less of it, harder to reach, requiring risky technology like BP’s deep underwater wells. The threat of ecological disasters and foreign encumbrances are nothing compared to the spectre of the spigot turning off. And the theory implicates us all; according to Richard Heinberg, senior fellow at the California-based Post Carbon Institute, half of the world’s non-renewable resources have been used up in the lifetime of the Boomer generation.

Even as a thought experiment, refuted by some scientists and futurists and optimists, “peak oil’’ is an opportunity to think past the relative placebo of renewable grocery bags and remember that our oil dependence wasn’t preordained. Early plastics were made from coal resin, says Brian Black, professor of history and environmental studies at Penn State Altoona. Petroleum just made them more malleable and cost-effective. Early car production was electric; Henry Ford even fiddled with an electric version of the Model T. But during World War I, we got hooked on the internal combustion engine, which fueled the suburbs and the road trip and the frequent flier and the culture of expansion we’re accustomed to now.

Changing that culture will be tough, because it inevitably means sacrifice. “No politician wants to stand up in front of his constituency and say look, fossil fuel should be more expensive, we should be traveling less and so on. He’d be hooted off the stage,’’ Heinberg told me.

But he paints a dire portrait of contraction if no one acts, a time when oil is so costly that it limits economic expansion, when big houses are a liability and cars hard to afford. (His institute is developing ways to facilitate carpools, a sort of post-petroleum Zipcar by necessity.) The trick, he says, will be to put a positive spin on the change: We’ll get used to having smaller houses and less stuff. We’ll spend more time outdoors with our families.

Black’s vision is less dramatic. He imagines a slow weaning process that begins with reducing our dependence on foreign oil; he supported the president’s call for more offshore drilling before the BP disaster struck. He calls for policies such as cap and trade that put a price on oil’s long-term implications. And because transportation takes up the bulk of oil consumption, he believes that if we all convert quickly to fuel-efficient vehicles, we’ll still have enough petroleum available for the little things we rely on, the pharmacutical ingredients, diapers, and toothpaste tubes.

There have been moments when we’ve entertained these sorts of ideas. The Valdez spill, 21 years ago, reminded us how much oil can hurt the environment. The gas price spike, two summers ago, made us pity anybody with an SUV. Neither of them stuck. Will pictures of birds and anger at Tony Hayward do the trick now? Or will we wait until — sooner or much, much later — the wells really do run dry?

Also on The Angle: Cut the Pentagon budget