THIS STORY HAS BEEN FORMATTED FOR EASY PRINTING
Carlo Rotella

John Ruiz, the Hub’s least-celebrated champ, recently retired with none of the fanfare deserving of his prolific career 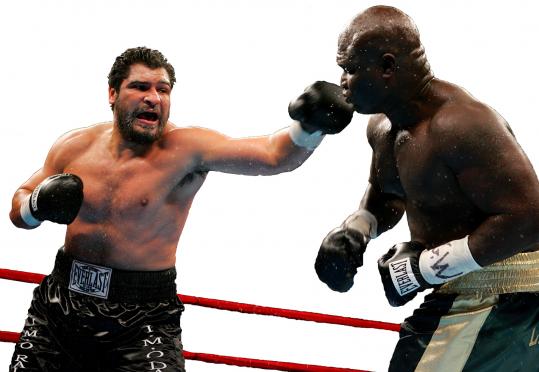 JOHN “THE Quiet Man’’ Ruiz, the boxer who was born in Methuen and raised in Chelsea, officially hung up the gloves the other day. He has retired before, but this time, at the age of 38, he probably means it. He twice held the World Boxing Association’s share of the fragmented heavyweight title, which made him the first Latino heavyweight champion, but the announcement of his retirement barely registered in the local sports news cycle.

Even hardcore Boston sports fans didn’t take much notice of him. Boxing isn’t as popular now as it was in the days of Rocky Marciano or even of Marvin Hagler, but Ruiz, who was never a big talker or a thrilling give-and-take puncher, was particularly unequipped to seize the attention he deserved from his hometown. It would have helped if his name was McRuiz or Ruizetti, but even that might not have done it.

It’s hard to explain Ruiz’s virtues to people who don’t care about boxing, and even to many who do. Few noticed that he was stronger, better trained, and tougher than almost everyone he fought. His sturdy, smooth-muscled body didn’t have the blown-up bodybuilder look commonly associated with heroic strength, and he didn’t knock opponents into next week. More than anything, he was stubborn. Exercising a terrible workmanlike patience in the ring, grinding and banging and shoving and hauling, he wore down an impressive roster of more spectacularly gifted fighters who were typically favored to beat him.

His record of 44-9-1 with 30 knockouts includes victories over Tony Tucker, Evander Holyfield, Kirk Johnson, Hasim Rahman, Andrew Golota, and Fres Oquendo. Ruiz could be had — he was blown out once, outclassed a couple of times, and robbed more than once — but, win or lose, he made it a chore to fight him.

Holyfield, the cartoonishly muscular conqueror of Mike Tyson whose name is a watchword for courage and unbreakable will (and astute fouling) in the ring, fought a trilogy of bouts with Ruiz that amounted to a nasty draw. Holyfield once told me, “If I had to choose to fight a guy, I wouldn’t choose to fight John Ruiz.’’ Just the thought of it brought a note of weariness into Holyfield’s voice that he didn’t bother to conceal.

Ruiz specialized in taking the fight out of men who prided themselves on taking the fight out of others. Oquendo, for instance, was quicker, slicker, and more athletic than Ruiz, who mauled him and leaned on him for 10-plus rounds, forcing him to use up his reserves. Ruiz didn’t land many clean punches, but he didn’t let Oquendo do anything at all. The crowd booed them until the 11th round, when Ruiz exploited a sudden opening to finish his frustrated and exhausted opponent with a couple of flush shots. Almost everyone said it was a lousy fight, but there was a relentless rigor, even a beauty, to what Ruiz did to Oquendo.

If Ruiz had similarly worn out Peyton Manning or Kobe Bryant or Alex Rodriguez, if he had displayed the same virtues as a member of the or or , he would rank high in the Boston pantheon. The sports media would heap him with laudatory clichés like “blue collar.’’ Fans would call sports radio to say that Ruiz was a throwback, a regular guy who got it done without showing off. But almost nobody said anything like that. Instead, when they talked about him at all, they complained that he was boring.

Ruiz, who has lived in Las Vegas for the past decade, says he’s moving back to Boston. There won’t be a parade to welcome him back to town, but he deserves one — a fittingly low-key one. I picture him rolling by in a sensible car, exchanging reserved nods with quietly appreciative fans.

He says he wants to open a gym here. If he ever does, that gym is unlikely to produce cutie-pies. He’s eager to teach young boxers, and he has useful lessons to impart about competence, perseverance, and the value of shutting your mouth and getting down to work. “You have to do what you have to do,’’ he told me, “even if it’s ugly.’’

Carlo Rotella, a guest columnist, is director of American Studies at Boston College.

Also on The Angle: Rubbing salt in the FDA's wounds