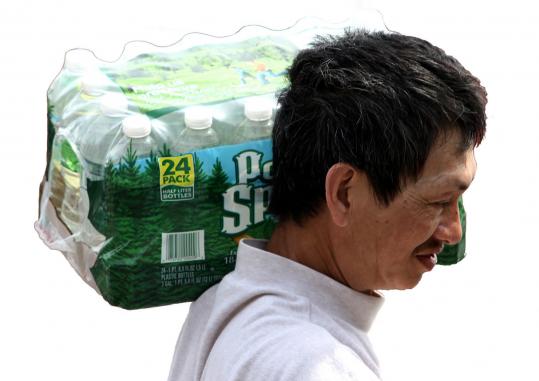 THE PEOPLE of Greater Boston will not even lift a finger to turn on the stove to boil water. The panic over the weekend’s water pipe rupture, which shut down clean water to 2 million residents, reached such levels that the Globe reported:

“In Chelsea, residents jammed the Market Basket parking lot, and those who did not have cars took taxis or walked as far as a mile.’’

“Police were called to a BJ’s Wholesale club in Revere after shoppers started pushing and shoving in their rush to buy water.’’

“In Braintree, which is not under a boil-water notice, residents from Quincy were on the hunt for water.’’

The Globe reported sellouts of bottled water at BJ’s, Stop & Shop, and Star Market, and long lines for bottled water at , , and Trader Joes. The National Guard was called out to distribute bottled water. Water “refugees’’ scrolled the Internet on cellphones to find open coffee shops. One man was so desperate for coffee that he bounced around to five coffee shops before giving up to go home for some instant coffee.

The ability of the Internet to accelerate panic was proven as one couple said they fled to the supermarket for bottled water 10 minutes after reading about the water emergency on Facebook. A photo showed an elderly woman struggling with a free case of bottled water distributed Sunday by the city of Malden, on an 80-degree day.

What folly. The rational thing to me, having boiled plenty of pond water for 30 years on Scout trips and family wilderness adventures and living to write this column, was to stay home and boil away. Tap water costs a fraction of a cent. According to National Grid spokeswoman Debbie Drew, the company’s energy efficiency team estimates that it costs roughly 20 cents a gallon to boil water for two minutes with gas and 43 cents a gallon with electricity.

This contrasts to the ridiculous prices for bottled water, most of which is tap anyway. The Environmental Working Group says the national average of a gallon of bottled water is $3.79, or 1,900 times the cost of tap water. The Government Accountability Office last year estimated that the energy cost of bottling water into plastic containers and transporting it is up to 2,000 times the energy cost of tap water in Los Angeles. One woman featured in the Globe had a 1-liter bottle that cost $3.29. That is $13 a gallon, or 65 times the cost of boiling tap water by gas.

“It shows how much habit is one of the strongest drivers of culture,’’ said Neva Goodwin, an economist and cofounder of the Global Development And Environment Institute at Tufts University. “We have shown that we can change habits. Smoking cigarettes has changed substantially. We’ve stopped leaded gasoline, and lead in general. People flip out now if they move into a house with lead paint. But with bottled water, people aren’t yet stopping to think how much gasoline, money, and time they are spending going to the store for bottled water when they could stay home and boil it.

“Our society has so much gotten in the habit of believing that any need or want that you have, you can fill it with a purchase. We are consumed, as Dana Meadows [the late environmentalist] said, with filling immaterial needs with material goods,’’ Goodwin said.

“Immaterial,’’ as defined by the American Heritage dictionary, means “Of no importance or relevance.’’ The panic betrays how much a prisoner we are to the immaterial. A woman who paid $52.92 for a case of bottled water at a 7-Eleven in Jamaica Plain told the Globe, “I was kind of, like, shocked. And then I thought, ‘There’s no water.’ ’’

There has been water all along. We are just too lazy to boil it.