THIS STORY HAS BEEN FORMATTED FOR EASY PRINTING
Richard Parker 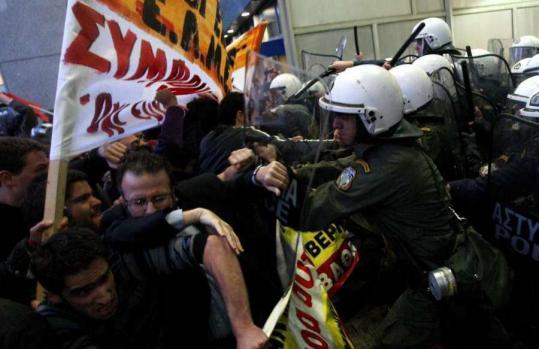 Riot police and protesters clashed outside the Finance Ministry in Athens this week. Greece’s economic crisis has left the country in turmoil. (Thanassis Stavrakis/Associated Press)
By Richard Parker May 1, 2010

THIS WEEK the US Senate finally started getting around to changing the rules that led to Wall Street’s disastrous meltdown two years ago. But debate over the so-called Dodd bill is gridlocked, even though no one thinks the bill is strong enough to stop and company from doing again what got us to where we are today.

Meanwhile, as Washington bickers, Europe is starting to burn. A once-small budget crisis in Greece is metastasizing so quickly that it’s now threatening to plunge not just Europe but America and the world back toward the global fiasco we faced two years ago.

Six months ago, Greece discovered a big budget problem — the deficit its outgoing conservative government handed over last fall was going to be more than 12 percent of its gross domestic product. The new government immediately announced massive wage, pension, and spending cuts, painful tax hikes, and deadly serious tax enforcement. It pledged to cut the deficit to 3 percent in two years — guaranteeing a draconian hangover that will produce a painful and protracted recession.

Until last week, Greece had scrambled to borrow enough money to cover its deficit, while swiftly bringing that deficit down. The rates Athens paid were painful, but with promise of European and International Monetary Fund aid earlier this month, there was light at the end of the tunnel.

Enter Wall Street. After two years of nearly unlimited government bailouts but no government reregulation, briefly sobered Wall Street speculators were ready to start partying again. Last year, amid 10 percent unemployment and millions of home foreclosures, banks and hedge funds booked record profits and paid out record bonuses. And they made such fortunes by doing, it turns out, the same sort of trading-floor gambling that nearly destroyed them and us in 2008.

As 2010 began, the Street’s “best and brightest’’ saw what suddenly looked like a new source of even easier money, playing what insiders like to call “The Headline Risk Game’’ on little Greece.

Here’s how it works: Greece’s recovery, like our own, still looks pretty shaky — but, for Headline Risk players, that’s an opportunity to bet against their recovery, then pounce when the inevitable bump in the recovery road appears. Their payoff comes as weaker investors rush out of the market for bonds, leaving Greece unable to borrow — and potentially forced to default. (Default, for Headline Risk players, can promise even bigger profits.)

Never mind that the new deficit figure turned out to be a small and rather routine adjustment. Greece’s borrowings costs suddenly soared to 19 to 20 percent — and costs for Portugal, Spain, and other weak economies soared with them. Now there’s a crisis over whether the euro zone itself will survive. In little more than four months, in other words, what had been little Greece’s deficit headache is today threatening to pull down Europe itself.

How can that be? How can tiny Greece — 2 percent of Europe’s total GDP, its deficit a tenth of that 2 percent —be pushing mighty Europe to the brink of causing what Lehman’s bankruptcy did two years ago? Are we actually staring at the start of Global Crisis 2.0?

And whose fault is it? Is it Greece’s fault — even though the new government has been doing everything it possibly can to solve the deficit crisis it inherited? Is it Europe’s fault (or more specifically Germany’s) for stalling on fulfilling its promise of aid to Greece?

Or is it really Wall Street’s — and Washington’s?

Central to Wall Street’s 2008 nose dive were the billions wagered in credit default swaps — the cheap derivatives-based bets with lottery-size payoffs that speculators had placed on US homeowners. Today exactly the same sort of swap bets are what Wall Street has placed against Greece in their Headline Risk Game — and right now we’re looking at what could become a replay of the same disastrous consequences.

We used to know how dangerous such unregulated betting could be. Until the late 1990s, you couldn’t place those sorts of bets on housing or government bonds. Thanks to deregulation efforts led by advocates such as Tim Geithner, Larry Summers, and Ben Bernanke suddenly you could — and many did.

Taxpayers now realize that housing is no place for those sorts of bets — but neither are Greece’s bonds, or the bonds of other small countries that are struggling to recover from the Wall Street tsunami that hit them as well as us in 2008.

Right now all eyes are focused on Berlin, and the prospect of a new round of European support for Athens. Hopefully the package will come — quickly — though it clearly won’t arrive without great political agony in European capitals.

Here’s the rub for Americans. Had Washington closed off credit default swaps — and similar derivatives-based betting— from this sort of pernicious gaming of global financial systems, this appalling risk of European meltdown could have been avoided. By letting Wall Street work the same magic on Greece that it did on US homeowners, we’ve not only worsened the inevitable pain for millions of ordinary Greeks, but the prospects of our own quick recovery as well.

To watch Washington let Wall Street legally keep doing what led to disaster two years ago is more than foolhardy.

Three things need be done immediately: First, the Senate needs to amend the Dodd bill to regulate credit default swaps. Second, President Obama needs to join the rest of the world, which wants global regulation standards, to prevent Wall Street from walking around national rules. Third, policy makers worldwide must begin crafting a much-expanded and re-chartered IMF (or a successor) to start getting right the global balance between the necessary freedom of finance and the fundamental rights of citizens.

There are plenty of ways to make money legally that minimize the risks for us all while maximizing growth. The latest fiasco in Athens underscores why it’s now time we tried them.

Richard Parker is an economist who teaches at Harvard’s Kennedy School of Government. He is John Kenneth Galbraith’s biographer and president of Americans for Democratic Action.