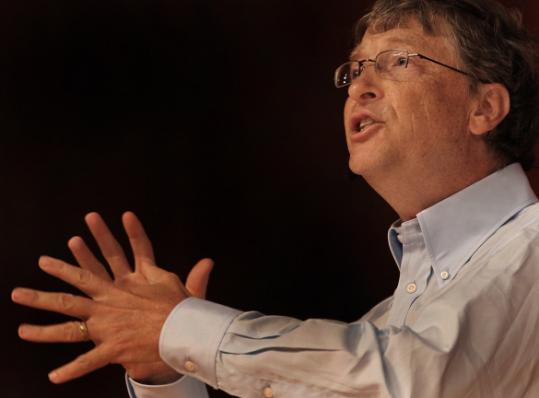 WHY WOULD anyone give Bill Gates a bad review? The founder of and head of the world’s largest charitable foundation has devoted the past year and about $3.5 billion to tackling problems in urban education, global health, and economic development. Yet respected historian Diane Ravitch characterizes Gates in a new book as a member of a “billionaire boys club’’ who has hijacked public policy on education.

Gates was in town last week as part of his “Giving Back’’ college tour to encourage students at Harvard and MIT to focus their energy and research on solving vexing problems at home and abroad. He said that his lifesaving work mounting vaccine and immunization programs in poor countries is easy lifting compared to pushing education reforms through the lines of resistant teachers unions.

“When we invent a vaccine, no group can uninvent the vaccine,’’ said Gates. “If you do good education, there are groups that can send you back to square zero.’’ Gates’s charitable work has taken him to unstable parts of the globe. Yet he described his foundation’s efforts to hold teachers accountable for student performance as “the riskiest thing we are doing.’’

Gates is backing efforts to broom bad teachers, provide merit pay for good ones, and identify what makes teachers effective. He is also an enthusiastic supporter of charter schools that operate free of union work rules.

“We don’t fund education,’’ said Gates during an interview after his MIT appearance. “What we fund is experiments in education.’’ And teachers unions, he said, resist such experimentation because, “It’s embarrassing when it works.’’

Gates cites minority student dropout rates of 50 percent as proof of the need for his work. “Is the status quo so good,’’ he asks, that school systems should “keep the dropout mill going full speed?’’

But in “The Death and Life of the Great American School System’’ Ravitch writes that Gates and other so-called venture philanthropists, including Eli Broad, are experimenting thoughtlessly. There is no proof, she writes, that Gates is on the right track now any more than he was from 2000-2008, when he pumped about $2 billion into a campaign to restructure large American high schools into smaller schools. That effort, writes Ravitch, was marginal at best.

Ravitch argues that high-flying, unaccountable philanthropists are dictating the country’s public school agenda through their grant-making instead of listening to the field. The “current obsession with making our schools work like a business,’’ writes Ravitch, “threatens to destroy public education.’’

Gates may be innovation-happy, but he is hardly laying waste to the nation’s public education system. If anything, he is seeding it for future success in ways similar to his funding of biotechnology research to improve the yields of crops in developing nations. Of course, his agricultural effort has its share of critics, too.

As for his limitless power, Gates says his charter school work is possible only in states where the public and lawmakers are willing to support experimentation. His home state of Washington, he adds, has blocked the creation of charter schools.

“The education system is always decided politically,’’ said Gates. “If she (Ravitch) thinks foundations are dictating, I don’t see it.’’

It’s not quite so simple. The pressure is mounting on school systems to conform to the foundations’ visions, especially when the current trend is to fund projects with measurable outcomes, not discretionary grants. And pushing back against the big foundations, or modifying their requirements based on local knowledge, was a lot easier a decade ago when the foundations were smaller and less bureaucratic.

Harvard education professor Thomas Payzant was a master at tapping foundation grants — about $100 million from 1995-2006 — when he ran the Boston schools. A decade ago, says Payzant, a major grant could be worked out with a tight proposal of a few pages and conversation with grantmakers at a soul food restaurant in the South End. But in his last few years as school superintendent, grants became considerably more rigid and prescriptive

“The focus of the work has been narrowed to what the foundations believe will give the most leverage for change and improvement,’’ said Payzant, who also trains urban superintendents with a grant from the Broad Foundation.

Gates should weigh the words of independent critics like Ravitch who don’t need his largesse. But one thing is clear: his eyes are open to the problems of public education that won’t improve through education business-as-usual.