What would Errol Flynn think? 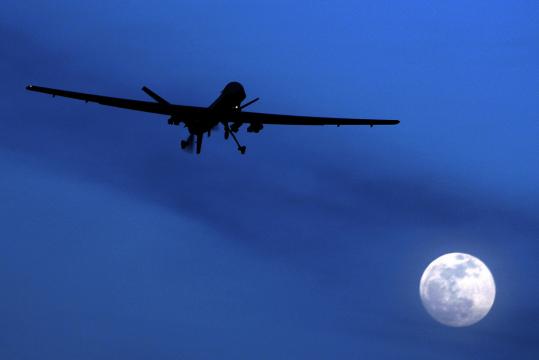 A US Predator drone flies over the moon above southern Afghanistan in January. (Kirsty Wigglesworth/Associated Press)
By H.D.S. Greenway February 12, 2010

PAKISTAN HAS confirmed the death of Taliban chieftain Hakimullah Mehsud, who died of wounds sustained in a pilotless drone attack last month. A similar drone attack killed his predecessor, Baitullah Mehsud, last summer when he was resting on his father-in-law’s roof.

They would have had no warning.

The Predator Drone can hover two miles overhead with a camera in its nose. Death would be delivered by a “pilot,’’ perhaps a civilian, sitting thousands of miles away, with a toggle stick and a button to push as if it were a video game. Two Hellfire missiles instantly obliterated the house where Baitullah Mehsud was staying, killing not only him, but his father-in-law, his wife, and nine others.

The drone has become the weapon of choice against Al Qaeda and Taliban leaders. CIA director Leon Panetta called it “the only game in town,’’ and the Pentagon recently announced it was doubling drone production. The US Air Force will soon have more drones than fighter aircraft.

Since human beings first realized their flying machines could be used to fight wars, combat pilots have been considered the elites of the elite - knights of the air, in deadly skirmish far above the blood and mud of the trenches below. From the Baron von Richthofen, in his bright red, tri-plane, to today’s top-guns flying missions off of carriers in the Arabian sea, these aces have been glorified.

Hollywood has made the most of the concept. Think of Errol Flynn in “The Dawn Patrol,’’ a tale of brave but doomed aviators flying their kite-like crafts in World War I - “roaring into each blood-red dawn . . . with death on their wings.’’

When the Germans drop a downed pilot’s goggles over stiff-upper-lipped British lines, a character says: “A very gallant gentleman died this afternoon. . .’’

Bomber pilots, too, would get their due. Think of “Twelve O’clock High,’’ with Gregory Peck, brought in to shape up a morale-sapped American bomber squadron in England during World War II. Daylight missions over Germany are taking their toll.

“Now I don’t have a lot of patience with this ‘what are we fighting for?’ We’re in a shooting war. We’ve got to fight. And some of us have to die, ’’ Peck says manfully.

Then there was the “Bridges of Toko-Ri,’’ with William Holden and Grace Kelly as the faithful navy wife, during the Korean War. Holden “buys the farm,’’ as they used to say, and is killed in the last reel. But the film ends with his admiral asking: “Where do we get such men? They leave this ship and they do their job. . . Where do we get such men?’’

Fast forward to today’s pilot. He may be middle-age with a bit of a paunch, looking nothing like Tom Cruise in “Top Gun,’’ a more recent film glamorizing flyers. Our man is schlepping into the CIA’s campus in Langley, Virginia, for his shift at the toggle stick.

As Jane Mayer described it in the New Yorker, he’s sitting at a screen. He can zoom in, see whom he wants to kill, and push a button. Sometimes he sees people running out of targeted houses for cover. This is so common, according to Mayer, that the running people are called “squirters’’ at Langley.

When his day is done, our “pilot,’’ will trudge home to his family in the suburbs for dinner - or more likely breakfast, given that it’s night in Virginia when it’s day in Pakistan. It’s a far cry from Errol Flynn in his Sopwith Camel. No Hollywood admiral is likely to ask: Where do we get such men?

Unlike bomber pilots and cruise missile operators, however, drone pilots can see the damage they do. Combat stress can affect drone pilots, too, but probably not as dramatically as bombardiers in “Twelve O’clock High.’’

Before 9/11, the CIA hesitated to strike bin Laden’s farm in Afghanistan because women and children might be killed. But as the war drags on the rules of engagement, rules against targeted assassination, whom to kill and not kill, have slipped, as they invariably do in all wars.