THIS STORY HAS BEEN FORMATTED FOR EASY PRINTING
Renee Loth 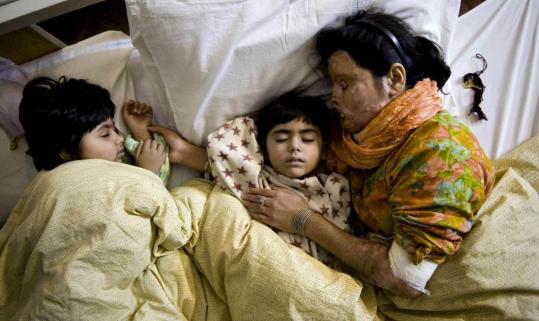 Pakistani acid attack victim Naziran Abid, 23, puts her daughters Haseena Abid, 5, and Alishba 3, to sleep at the Acid Survivors Foundation in Islamabad. Acid was thrown on Naziran’s face and torso by an unknown attacker while sleeping. (Getty Images)
By Renee Loth January 15, 2010

LAST MONTH in Lahore, Pakistan, a court ordered the noses and ears of two brothers cut off after they were convicted of doing the same thing to Fazeelat Bibi, a 21 year-old woman who had declined a marriage proposal from one of them. Although few believe that part of the sentence will ever be carried out, it is considered a victory for women’s rights that the case against the brothers was even brought. The men were charged with kidnapping Bibi and trying to slit her throat with a wire for the “dishonor’’ she had brought upon the suitor. Instead, they merely mutilated her and left her for dead.

Every day in Pakistan - and in volatile trouble spots all over the world - women’s lives are routinely endangered, to say nothing of their “rights.’’ Even where such practices are strictly against the law, they are woven into a social system where young girls are bartered away to pay off family debts, brides are killed in suspicious “kitchen fires’’ for having an insufficient dowry, and women marry their rapists because they cannot live with the social stigma of a crime not their own.

Cultural violence targeting women is a bedeviling problem everywhere, but Pakistan is ranked third lowest on the World Economic Forum’s gender equality index. And, of course, Pakistan is a key strategic ally for the United States in the battle against terror. In the past two years Taliban extremists in control of the Swat Valley have stepped up their intimidation of women, according to the Human Rights Commission of Pakistan, bombing more than 400 schools for girls and condoning honor killings and rapes.

Against such a backdrop it is difficult to imagine women in Pakistan even leaving their homes, much less receiving an education and becoming agitators for change. And yet the horrors only animate the courageous women who are fighting for peace and dignity in their war-torn countries. Gathered at Harvard this week for a colloquium sponsored by the Institute for Inclusive Security, many of these women - from Pakistan, Rwanda, Bosnia, and Lebanon - made a strong case for being brought into peace negotiations or other efforts to engage extremists.

Humaira Shahid, an editor at the Pakistani daily Khabrain, became a member of the provincial assembly in her native Punjab. She describes “walking into a traditionalist parliament full of patriarchs’’ and successfully pushing a resolution recognizing acid attacks as attempted murder. Though she concedes that protective laws may not be well enforced at first, even a drop in the ocean sends out ripples of change. “You bring charges against two and 200 are scared’’ to commit the crimes, she said.

Mossarat Qadeem is executive director of the Pakistan Initiative for Mothers and Newborns, which works in the treacherous tribal areas training women in peace-building and registering them to vote. When three of her staffers were detained by agents of a tribal chief, she said, she walked into his headquarters wearing a white chador, the color of reverence and respect. She quoted verses from the Koran about the protection of women at him until he released the workers. The idea is not to overturn centuries of religious tradition, she said, but to expand it. “We empower women by strengthening the role they play within cultural and religious norms.’’

I was in Pakistan in 2006, just after the cartoons depicting the prophet Mohammad were published in a Danish newspaper. There were violent protests every day. Mobs attacked Western embassies, torched McDonald’s outlets, threw handmade bombs, and chanted “Death to Denmark.” Even with our heavy security it was frightening, not least because the protesters seemed so utterly beyond the reach of reason.

But perhaps dry logic is not the force to bring against extremism, just as military might cannot salve the grievances of young men who are indoctrinated or drawn to violence. Instead, the quiet moral authority carried by these “daughters of the soil” could be part of the solution, even in traditional societies. Perhaps more than anyone, women have a stake in restoring peace and stability, so that girls may again go to school, and they can start the work of rebuilding their communities. Women clearly have the strength; they just need the power.

Renée Loth can be reached at loth@globe.com.