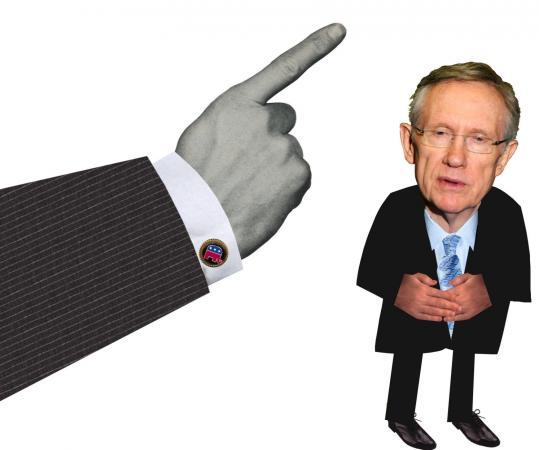 YOU CAN can write a check to the United Negro College Fund. You can display your collection of Negro Leagues baseball cards. You can discourse learnedly on the significance of the “magical Negro’’ in film and fiction, identify yourself as “Negro’’ on the 2010 Census, or register for a course on Negro spirituals.

But you cannot talk up the presidential prospects of a biracial US senator by expressing the opinion that American voters would embrace a “light-skinned’’ African American who speaks “with no Negro dialect, unless he wanted to have one.’’

Is that the lesson we’re supposed to learn from Harry Reid’s racial imbroglio?

The Senate majority leader made those comments in 2008, in the course of privately telling fellow Democrats why he thought Barack Obama should run for president. When his remarks, quoted in a new book on the 2008 presidential campaign, became public over the weekend, Reid immediately apologized for “using such a poor choice of words’’ and “for offending any and all Americans, especially African-Americans.’’

But how many Americans are really offended - genuinely upset - by Reid’s admittedly “poor choice of words’’? Granted, the word “Negro’’ has long been politically incorrect, but Reid is 70 and the speech habits of a lifetime can be hard to break, especially when speaking in private. Granted, too, that a political figure today would have to be remarkably obtuse to discuss publicly whether a black candidate might benefit from being light-skinned or able to turn a “blaccent’’ on and off at will. But is anyone shocked to learn that there are politicians who weigh such factors when talking behind closed doors?

Nevertheless, the news of Reid’s gaffe had no sooner broken than some Republicans were reaching for feathers and hot tar. “These are clearly racist comments,’’ Liz Cheney declared on ABC’s “This Week’’ program. Frances Rice, the chairman of the National Black Republican Association, quickly distributed a screed titled “Harry Reid Must Resign!’’ At PowerLine, a widely-read conservative blog, John Hinderaker fumed over Reid’s “absurdly racist comments about Barack Obama.’’

Before the weekend was out, Texas Senator John Cornyn, who heads the National Republican Senatorial Committee, had called on Reid to step down. So had GOP Chairman Michael Steele, who decried the double standard whereby an apology suffices “when Democrats get caught saying racist things,’’ while a Republican’s racial blunder becomes a hanging offense.

The fact, however, is that Reid didn’t “get caught saying racist things.’’ He got caught presuming that most Americans are racial bigots. He got caught in the condescending attitude that white voters are still so biased that they would refuse to vote for a candidate because of the color of his skin. He got caught, in other words, peddling the lie that America is still a racist nation.

The real trouble with Harry isn’t that he’s a racist. It’s that he is so quick to hang that label on others - particularly others who don’t share his liberal views.

In 2006, for example, Reid took to the Senate floor to denounce legislation declaring English the national language of the United States. “This amendment is racist,’’ he barked, slurring thereby not only the 63 senators who voted for it, but the large majority of Americans who agreed with them.

Just last month, Reid likened Republicans who oppose Democratic health-care legislation to the 19th-century white supremacists who supported black slavery. “If you think you’ve heard these same excuses before, you’re right,’’ Reid said. “When this country belatedly recognized the wrongs of slavery, there were those who dug in their heels and said ‘Slow down. It’s too early. Let’s wait.’’’

It isn’t Reid’s “poor choice of words’’ that is so scandalous; it is his willingness to fan racial resentment for partisan political purposes. It is not for using the archaic word “Negro’’ that he owes his countrymen an apology; it is for practicing the archaic identity politics that insists on sorting Americans by race, class, and gender, rather than judging them on the basis of character and integrity.

Politics is rough-and-tumble, but some things should be beyond the pale. The use of racism as a tactic is one of them. Americans can live with a Senate leader who comments privately on a candidate’s “Negro dialect.’’ A leader who casually paints his political opponents as racist is a different matter entirely.