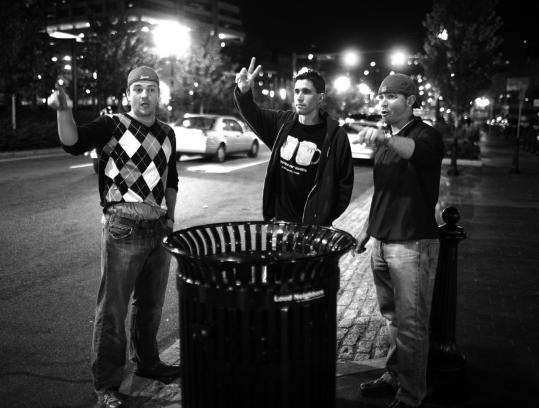 There is often fierce competition for cabs after downtown clubs have closed, police say. (Aram Boghosian for The Boston Globe)
By Lawrence Harmon December 8, 2009

SOMEBODY’S DAUGHTER in a short black skirt is passed out in an alley off Commercial Street. At the edge of Faneuil Hall, an almost vertical woman challenges a man to a fight in front of the Hong Kong restaurant - home of the infamous scorpion bowl. And something bad is brewing at Kitty O’Shea’s on State Street where police and bouncers are giving the bum’s rush to a stocky guy with a bloody head and a shredded shirt.

Behold the grandeur that is Boston’s downtown night club district on a recent Saturday night.

Somewhere in this sea of backward baseball caps, skimpy tops, and sausage vendors lurk serious public policy considerations. What do these under-30 patrons think about Boston’s 2 a.m. closing time for bars? Is that too early for a world-class city? How do they get home when the city’s public transit system shuts down an hour before the bars do? Efforts to elicit answers collapse when a rumor starts that the middle-aged man with a reporter’s notebook is horror writer Stephen King. No autographs, please.

It seems counterintuitive, but allowing downtown bars to extend their closing hours from 2 a.m. to 4 a.m. might calm these waters. The current closing time guarantees chaos when thousands of customers emerge simultaneously from downtown clubs. Fights along State and Broad streets often stem from fierce competition for cabs, say police. Two-hour waits for transportation are common. Patrons could be sitting safely inside - and sobering up - during that stretch.

Although state law forbids the serving of alcohol in clubs after 2 a.m., Boston should be allowed to extend club licenses for another hour or two, provided operators stick to food, coffee, and soft drinks. Alcohol is more profitable. But the after-hours demand for food is strong enough to keep the sidewalk sausage vendors busy. By extending the hours, patrons could enjoy better meals inside the clubs and take their own time leaving. Most importantly, customers would leave at staggered intervals, reducing the 2 a.m. crush. Later hours might also relieve some pressure on Area A-1 police officers, who race between fight calls at North Station, the Theater District, and Faneuil Hall. It takes a lot of effort to get arrested when the bars close on Saturday night. It’s partly a matter of patient policing and partly the fact that booking prisoners would sap police manpower.

Transportation is knottier. From 2001-2005, the MBTA provided Night Owl weekend bus service for clubgoers until 2:30 a.m. along selective routes. But the number of users didn’t justify the costs, say T officials. A better solution might rest with private bus operators. They already offer drivers and vehicles able to accommodate 25-30 people for rolling parties. Similar vehicles could be put in service solely for transportation to college campuses or popular neighborhoods. The service could demand $5 or $10 a head and make several trips each night. It’s a good business opportunity. But it would require some expansive thinking by the city’s hackney and transportation departments to work out licensing requirements and routes.

It’s risky to stick up for the late-night crowd in Boston, where neighborhood tranquility trumps merrymaking. Mayoral challenger Michael Flaherty found that out a few days before the November election when he accused Mayor Menino of throwing a “wet blanket’’ on the city’s nightlife scene. Some nightclub owners immediately embraced Flaherty’s candidacy, which delighted Menino. On the night of his reelection, Menino said two things had convinced him he would win. The first was that residents had looked him “straight in the eye’’ throughout the day, like a favorable jury. The second was that Flaherty’s name had been linked to the late-night party scene.

Still, there may be a glimmer of hope for nightclubs in non-residential areas of the city. Daniel Pokaski, chair of the Boston Licensing Board, says that the board, which regulates alcohol and food licenses, might “look at’’ requests for extended hours on a “structured basis.’’ That’s not terribly specific. But it’s a start in a city where the topic can stir up more trouble than a scorpion bowl.