THIS STORY HAS BEEN FORMATTED FOR EASY PRINTING
Bill McKibben 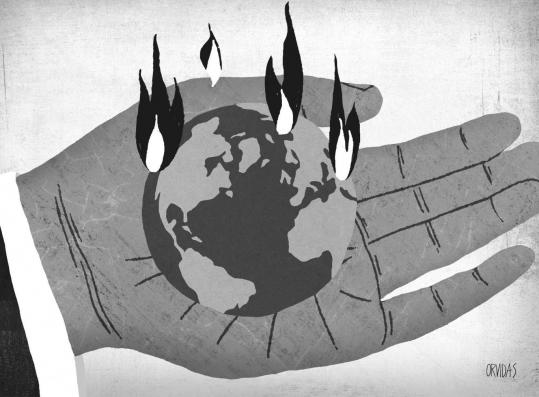 PRESIDENT OBAMA will appear at MIT this morning to talk about climate change and energy - and chances are he’ll try pretty much to use the same tactic he has used in the health care debate, working with Congress to pass something modest. It’s the sensible and straightforward approach, but in this case good politics may be bad science.

That’s because global warming is different from almost every other problem we face. The negotiation that really counts is not between Republicans and Democrats or industry and the greens, or even between the United States and China. The real bargaining is happening between human beings and physics and chemistry, and that’s a tough negotiation.

Physics and chemistry have already announced their bottom line. In the last two years a slew of research has shown that the most carbon we can safely have in the atmosphere is 350 parts per million - indeed, a NASA team said that above that figure we can’t have “a planet similar to the one on which civilization developed or to which life on earth is adapted.’’

We’re already well past the 350 figure, at 390 parts per million, which is why Arctic sea ice is melting, glaciers thawing, and the ocean turning steadily more acidic. To meet the 350 goal will mean a far more aggressive approach than the one Obama and Congress have so far taken (the bill making its way through Congress explicitly aims for a world with 450 parts per million carbon).

The president may think he lacks the public backing to go for stronger measures. But there are signs of a worldwide climate movement finally emerging. Tomorrow, citizens and scientists will take part in more than 4,500 demonstrations in 170 countries around the world - all designed to drive that 350 number deep into the public debate.

The protests are designed to help leaders like Obama - to give them some political space to fight back against the forces of inertia, and of vested interest. But organizers need the help of political leaders, too.

Leaders need to take risks to help educate their populaces about both the dangers of climate change and the possibilities for a rapid transformation of energy economies.

Last weekend, for example, the president of the Maldive Islands, Mohammed Nasheed, led his entire government beneath the waves for an underwater Cabinet meeting. They passed a resolution aimed at other governments: “With less than one degree of global warming, the glaciers are melting, the ice sheets collapsing, and low-lying areas are in danger of being swamped. We must unite in a global effort to halt further temperature rises, by slashing carbon dioxide emissions to a safe level of 350 parts per million.’’

By comparison, Obama has it easy. He would definitely suffer some political heat for a tougher stance on climate, but so far the very existence of his nation isn’t in danger. It would risk real political capital to push for change on the scale that the science demands. Since even a politician of his talents can’t amend the laws of nature, though, let’s hope that beginning today he’s willing to take some real risks.

Bill McKibben is a scholar in residence at Middlebury College and coordinator of 350.org.