THIS STORY HAS BEEN FORMATTED FOR EASY PRINTING
Mark Ward 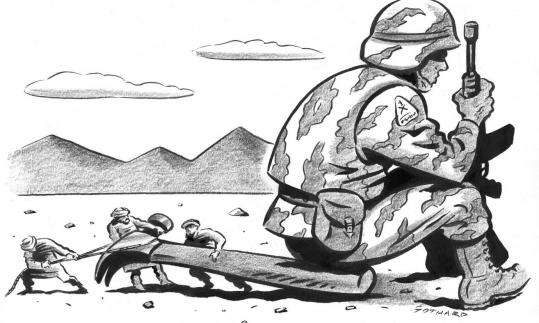 SEVERAL OF the countries contributing troops to the war in Afghanistan provide more than weapons and military equipment for the fight. They also provide funds for “quick impact’’ projects, called QIPs, on the theory that building a school or a clinic will win the hearts and minds of the local community and “buy’’ their soldiers added security.

But QIPs (and the US funds, called CERP for Commanders Emergency Response Program) are beginning to impede Afghanistan’s development at the local level.

In many Afghan provinces, government institutions can now deliver local projects. The Afghan people are beginning to connect with and see the value of their government. But with the international military still building schools and clinics, it is delaying the day when Afghans can govern for themselves.

By continuing to carry out QIPs across the country, the militaries are keeping Afghan institutions from learning how to make plans, manage funds and projects, and be accountable to their people. Just like the military recognizes the importance of “Afghanizing’’ the fight against the Taliban by turning more responsibility over to the Afghan National Security Forces, it must also start “Afghanizing’’ the way it spends QIP funds.

QIP funds are still needed, though, because most civilian donor agencies are too slow and inflexible to deserve a monopoly on funds for development projects. Competition from other actors, whether military or nongovernmental organization, might force long overdue changes at the civilian agencies.

But the international militaries must change their tactics or they will impede Afghan development.

First, QIP funds should be used to fund programs that deliver services to people. Programs run by the Afghan government have delivered small projects like wells, primary schools, and basic health clinics to thousands of communities. They have been so successful that they are running out of funding. The international militaries should fund these programs from their QIP budgets.

Second, in provinces where the international militaries have large QIP budgets, they should be funding “big ticket’’ infrastructure projects that the Afghans cannot manage yet. They would not compete with Afghan-run programs, and could build lasting and important infrastructure in insecure parts of the country where the civilian donor agencies with big budgets are less often seen.

For example, Kandahar has been trying to get QIP funds for a ring road around the city to reduce military convoys through the center, and cut civilian casualties from Taliban attacks on the convoys. But the international militaries in Kandahar prefer to use their QIP funds for small-scale projects and the ring road is still waiting. The sorry irony is that CERP funds were returned to the US Treasury this year because there were not enough small projects to use up all the funds.

Political leaders need to find ways to use QIP funds to pay for Afghan government programs. They can provide more flexibility to use these funds for all kinds of projects, big and little, depending on local government capacity and needs.

And they can change the incentives. After a recent lecture at the NATO School in Germany, a senior military officer from a European nation told me he would probably get promoted if he completes a small project during his less-than-one-year tour in Afghanistan. Try as I might, I could not persuade him to take on a tougher project that the Afghans could not do for themselves.

NATO leaders should start rewarding military commanders who help the Afghans learn and perform their work better, by supporting successful national programs, or start a tough infrastructure project that might take several years to complete. Putting young men to work on a two-year road project will have greater impact in the long run than almost any QIP. “Cutting ribbons’’ on QIPs has to stop being an indicator of success for our military commanders.

The international forces in Afghanistan are to be admired. But their leaders have to rethink the tools they give them, and the rules they impose, so they can turn Afghanistan over to the Afghans sooner and let the soldiers return home.

Mark Ward is special adviser on development to the United Nations Special Representative in Afghanistan.