A mayoral tug of war over ‘The Kid’ 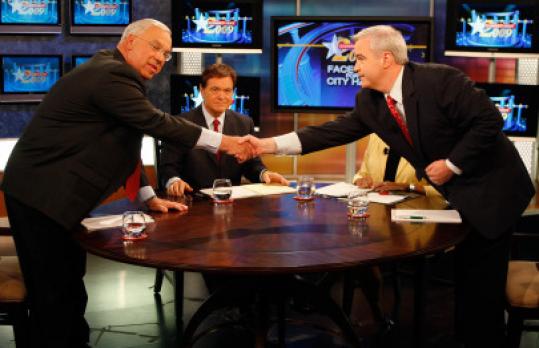 The mayor and Michael Flaherty exchanged a quick greeting before the debate. (Barry Chin/Globe Staff)
By Scot Lehigh October 2, 2009

THE MOST interesting moment in last night’s debate?

The conceptual tug-of-war over the guy we’ll call “the Dorchester Kid.’’

That would be Councilor at Large Sam Yoon. He’s “a kid that has a Princeton degree and a Harvard degree,’’ mayoral hopeful Michael Flaherty noted early on of the guy he has promised to make his deputy mayor.

At which point, poor Sam may well have been wondering: Do either one of these guys realize I’m 39? Old enough to buy beer for myself? Or go to an R-rated movie if I want to?

With that mention, the Kid dropped out of the discussion until near debate’s end, when Channel 5’s Janet Wu asked what specific responsibilities he would have. When Flaherty mentioned that he and Yoon would be talking about dismantling the Boston Redevelopment Authority and replacing it with a planning department, Wu posed the obvious follow-up: Would he put Yoon in charge of those efforts?

“He’ll be helping me, no doubt about it. He’s going to be there with me, every step of the way,’’ said Flaherty, sounding like a man who wasn’t completely sure he wanted the spotlight to occasionally wander Yoon-ward.

“I think it’s job for votes . . . telling Sam Yoon, ‘You have a job in my administration if I win,’ hoping to get the votes of Sam Yoon to be with Michael Flaherty,’’ said he.

That sounded a wee bit petty (what, our mayor?).

Still, the view here is that Flaherty’s chances of springing an upset hinge largely on persuading people that his alliance with Yoon is real and that he’s not just, well, kidding.

And on that score, the Southie Kid could have done a whole lot better last night.

Scot Lehigh can be reached at lehight@globe.com.