Empty roar from ‘Lion of Islam’ 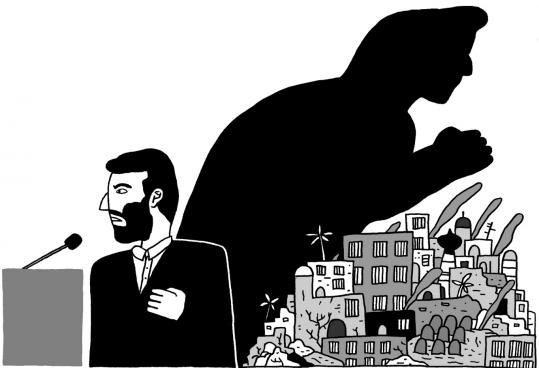 IRANIAN President Mahmoud Ahmadinejad, brazen denier of facts and history, is returning to the United Nations today. As with the UN Conference on Racism, Ahmadinejad is likely to repeat his blistering attacks on Israel and the United States in an attempt to pose as the Lion of Islam. Instead of applause, he should expect the silence of the Islamic world.

In 2006, Ahmadinejad, riding a wave of Muslim outrage about the war on terror, wrote to President Bush about the abuse of Muslim detainees at Guantanamo Bay detention camp. “There are prisoners in Guantanamo Bay that have not been tried, have no legal representation,’’ he wrote. “There is no international monitoring of their condition and fate. No one knows whether they are prisoners, POWs, accused or criminals.’’

Though none of the suspected terrorists were Iranians, Ahmadinejad justified his intervention on the highest moral grounds:

“I could not correlate the abduction of a person, and him or her being kept in secret prisons, with the provisions of any judicial system. For that matter, I fail to understand how such actions correspond to the teachings of Jesus Christ, human rights and liberal values.’’

Khamenei’s post-election crackdown has led to the detention of more than 4,000 protesters. The opposition claims more than 69 fatalities. The deaths of Sohrab Arabi, Neda Soltan, and countless others have exposed Khamenei’s brutality even to the Islamic world. Ranking ayatollahs have called for the release of political prisoners and condemned their mass trials as “Stalinesque.’’

With revelations of the grizzly murder of Mohsen Ruholamini, the son of a high official, even Khamenei was shamed into closing the Kahrizak detention center for “failing to preserve detainee rights.’’

Despite this evidence, the self-styled Lion of Islam is now silent as a church mouse about detainee abuse in Iran’s Guantanamo: Evin prison.

Mehdi Karroubi, the defeated presidential candidate, has persisted in documenting allegations about the rape of minors:

“Some of the detainees have reported that certain individuals have so severely raped some of the girls in custody that the attacks have caused excruciating damage and injury to their reproductive organs. At the same time, they report that others have raped the young boys so violently . . . [that they] have been lying in a corner of their homes since.’’

Karroubi, a former political prisoner, observes: “If only one case is true, it is a catastrophe for the Islamic Republic of Iran which has turned the bright, shining history of Shia clerics into an atrocious, shameful fate that has outdone many dictatorial regimes, including that of the tyrannical Shah.’’

Still, torture and sexual violence in Iran’s prisons did not begin with Ahmadinejad’s reelection in June 2009. The stage for terror - the purge of leftists in 1988 and reformists in 2009 - was set with the summary execution of monarchists by Khomeini’s revolutionary tribunals in 1979. In 1982, Mehdi Bazargan, Khomeini’s first prime minister, asked: “What has the ruling elite done in nearly four years, besides bringing death and destruction, packing the prison and the cemeteries in every city.’’ In 1988, Ayatollah Montazeri denounced the judiciary’s mass murder of more than 3,000 leftist detainees, and condemned as unIslamic prison guards raping virgins before their execution. It is Khomeini’s medieval and murderous system of justice that remains etched in the Iranian constitution and enshrined in Evin prison.

Though self-serving, Ahmadinejad’s letter to Bush grounded detainee rights in universal principles of justice and compassion. Rape, torture, and murder of Iranians cuts against the teachings of the prophets Ahmadinejad claims to represent. Despite his visions of Christ and the Mahdi, the Lion of Islam is nothing but a slave of Khomeini’s ghost.

When he appears at the UN, Muslim leaders should demand that Ahmadinejad grant Iranians the legal protections he urged Bush to grant Muslims in Guantanamo. Alternatively, Ahmadinejad should enlighten UN ambassadors with a disquisition on how the prophets granted Khamenei the right to equate the rape, torture, and murder of Iran’s children with the fundamentals of Islam.

Amir Soltani Sheikholeslami is operations director at Omid For Iran. Rita Nakashima Brock, co-author of “Saving Paradise,’’ is founder of Faith Voices for the Common Ground.