THIS STORY HAS BEEN FORMATTED FOR EASY PRINTING
Dick Lehr 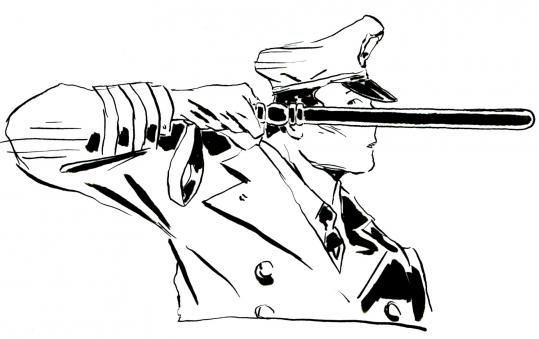 THE QUESTION I have for Boston Police Commissioner Ed Davis is this: Why does it take a federal judge to throw a judicial tantrum about a lying cop before the Boston Police Department investigates one of its own?

The judge, Mark Wolf, kicked off a legal brouhaha this spring by ruling that an arresting officer in a Boston gun case had testified falsely. Wolf is mulling sanctions against a federal prosecutor in the case who failed to turn over police records to defense attorneys revealing the cop’s credibility gap.

It was only after Wolf’s ruling - attracting lots of media attention - that the Police Department initiated an Internal Affairs investigation of the officer.

So I ask Davis, over coffee this week, why did it take until a judge’s public tirade to investigate the officer?

Davis’s response is clear and emphatic. “It shouldn’t have,’’ he says.

Indeed, it turns out the commissioner has plenty to say about police lying and the damage it does to policing, not just in Boston but everywhere. “Dishonesty is inconsistent with the duties of a police officer,’’ he says. “We are paid to be witnesses, and when we are untruthful the system breaks down.’’

We’re meeting for coffee because Davis recently read my new book, “The Fence,’’ and wants to discuss the misconduct and lying that are key factors in the mistaken beating and cover-up of plainclothes Boston Police Officer Mike Cox in 1995. He says that while most cops do the right thing, lying by police has long troubled him, a dark side of the police culture he’d like to change. He’s thinking the opportunity may be at hand, citing Judge Wolf’s actions, the department’s most recent corruption case (the so-called steroid-use scandal) that featured plenty of lies, and all the talk in law enforcement circles about the book, which reexamines the Cox beating case and the Boston police culture.

With no let-up, he continues talking the talk of a change agent. “This department is serious about the issue of truthfulness,’’ he insists. “There can be no messing around with the facts on material issues.’’

As proof he means business, he discloses he’s putting the finishing touches on a new policy he’ll call the “Bright Line Rule.’’

“If our own internal process determines that an officer has been untruthful, the punishment will be termination.’’

Lying, he says, will now be a firing offense.

“Integrity and honesty have always been basic to the job,’’ he explains. Indeed, the twin values are policing platitudes cited by every chief and commissioner, with the BPD having its own high-minded-sounding Public Integrity Policy: Rule 113.

But for Davis, here’s the rub. “The consequences for not being truthful have not been clear. No one has yet said it’s going to be dealt with by termination. I’m changing that.’’

The words an officer writes down in a police incident report, the statements an officer makes to Internal Affairs investigators, the sworn testimony an officer gives to a grand jury or in court - it has to be truthful or else, Davis says.

“The penalty will be termination, no matter the officer’s reputation. First one - and you’re out.’’

Police perjury - nicknamed “testilying’’ - has certainly dogged the Boston Police Department. The Globe’s Spotlight Team, as part of a yearlong look at police corruption in 1997, wrote about numerous instances where testilying resulted in wrongful convictions and flawed trials. Ever since, court cases where a cop has been caught in a lie, usually by a defense attorney, pop up in the news periodically. And there’s this: An off-duty Boston police officer came up to me after I finished a talk at a bookstore a few weeks ago and brought up the practice of falsified police reports. He said testilying was not a term he was familiar with, but the lying was. “We just don’t call it that,’’ he said about the messing around with the truth. “We call it ‘creative writing.’ ’’

In the past, police leaders and prosecutors have paid lip service at best to the problem. Following the Globe’s expose in 1997, then-Boston Police Commissioner Paul Evans, then-Suffolk District Attorney Ralph Martin, and court officials staged a press conference to announce a crackdown on police lying. Judges were going to be able to report cops suspected of lying for further inquiry. But the reform turned out to be a hollow public relations moment. In a follow-up four years ago, the Globe discovered the new reporting system had never been implemented.

Now Davis says he wants a referral system. He wants a formalized process where judges and prosecutors who have concerns about an officer’s integrity can report that concern. “That kind of reporting is extremely important.’’ The stakes, he says, are huge. How can police be effective in the tough-sell of persuading civilian witnesses in Boston’s high-crime neighborhoods to come forward if the department’s own credibility is in question? It’s all about public safety and successful criminal justice.

“The message to the community has to be that lying will not be accepted,’’ he says, “and anyone who’s caught doing it will be terminated.’’

The commissioner says he’s planning to announce the department’s new position soon. I bring up again the investigation of the officer named Rance Cooley who is at the center of the storm ignited by Wolf. He declines to comment about a pending case. He does say his new “Bright Line Rule’’ against lying will take effect once it’s been issued formally inside the department.

“You need to set the rules of engagement first,’’ he says. It’s only fair. “But from here on in, we are going to deal with lying in a clear and forceful way.’’

Then I ask the commissioner if he’s ever fired an officer for lying, either in Boston or in Lowell where he was that city’s police chief. He says no. OK, then what do you say to those who might consider this new get-tough stance his own public relations moment? Who say Davis may find a test case, but then it will be back to business as usual? Who say the police have never been good at policing its own?

Davis finishes his coffee and stands. “My answer to that is: ‘Watch me.’ ’’

Dick Lehr, a former member of the Globe staff, is author of “The Fence: A Police Cover-up Along Boston’s Racial Divide,’’ and a journalism professor at Boston University.