THIS STORY HAS BEEN FORMATTED FOR EASY PRINTING
Timothy M. Gay

Bush is no Truman 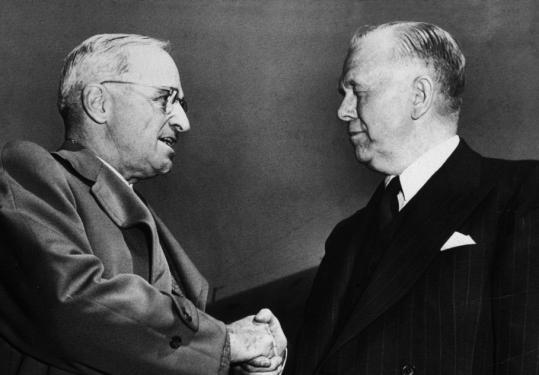 THE PRESIDENT was so down in the dumps that aides decided to surprise him with a party. With the economy sputtering and his foreign policy under siege, the president's pals thought a light-hearted evening away from the White House would buoy the boss's spirits.

Cabinet officers and cronies took turns toasting the chief executive, their playful gibes drawing cathartic laughter. Finally, the administration's gray eminence, the architect of its national security structure, rose to speak. The old warrior was as feared as he was admired. Chatter came to an abrupt halt.

"The full stature of this [president] will only be proven by history," he said, "but I want to say here and now that there has never been a decision made under this man's administration, affecting policies beyond our shores, which has not been in the best interest of this country. It is not the courage of these decisions that will live, but the integrity of the man."

Guests were stifling tears as the president stood to respond. But words wouldn't come; he was too moved.

In the sweetest fantasies of today's Republicans, George W. Bush and Dick Cheney would be the stars of this scenario. Alas, the president to whom the poignant toast was directed was Democrat Harry Truman. And as documented by David McCullough's "Truman," the encomium was delivered by Truman's secretary of state (and later defense) George Marshall.

Watch, their apologists argue, history will vindicate Bush and Cheney just as it exonerated Truman and Marshall. It may take a couple of decades, but future McCulloughs will come to recognize that the Bush-Cheney invasion of Iraq was transformative - and that torturing suspects was the only real way to fight terrorism.

Neo-cons can stop fantasizing now. Bush is no Truman, Iraq is no Cold War, and Dick Cheney is no George Marshall. The rehabilitation of Bush and Cheney is not going to happen in any foreseeable lifetime.

Why not? Well, for starters, look at the attributes Marshall ascribed to Truman.

"The best interest of this country." Like it or not - and many liberals, to their detriment, did not - the Cold War against the Soviet Union had to be waged and won. After four years of fighting fascism, the last thing Americans in the late 1940s wanted was another war. But Truman and Marshall understood that the United States had no choice but to respond to Soviet aggression.

Bush and Cheney, on the other hand, had choices in prosecuting the war on terror - and invariably made the wrong ones. Instead of finishing the job in Afghanistan against the enemy who attacked us on 9/11, they chose to settle an old score in Iraq against a despot with no connection to al Qaeda. Diverting resources away from the real war on terror and getting us foursquare into an ancient tribal rivalry were antithetical to US interests.

"The courage of these decisions." It took guts for Truman to ask Americans to make further sacrifices. He made it plain that a stirring military victory to end the Cold War was unlikely, that diplomacy would continue to be paramount, and that the United States had a moral obligation to rebuild the war-torn world.

What sacrifice did W. ask of Americans after 9/11? Sadly, Bush began emphasizing diplomacy only after his shoot-first, aim-later foreign policy went off the rails. Which is a shame, since on Iran and North Korea, the administration has begun to make at least some headway.

"The integrity of the man." The Cold War was a brutish enterprise. But Truman conducted it within the mores of civilization. Come Inauguration Day 2009, when military and intelligence officers are free to speak their conscience, Americans will find out just how unseemly the past eight years have been. Habeas corpus wasn't the only thing suspended during Bush's presidency. So was America's moral bearing.

Ironically, in Secretary of State Colin Powell, George W. Bush had a close facsimile to George Marshall. But Bush and Cheney undercut Powell, publicly exploiting his reputation while privately ignoring his caveats on Iraq.

Students of history looking for a "toast" to George W. Bush's foreign policy can find it in Colin Powell's endorsement of Barack Obama.

Timothy M. Gay is a writer and historian.