THIS STORY HAS BEEN FORMATTED FOR EASY PRINTING
Andrew J. Bacevich 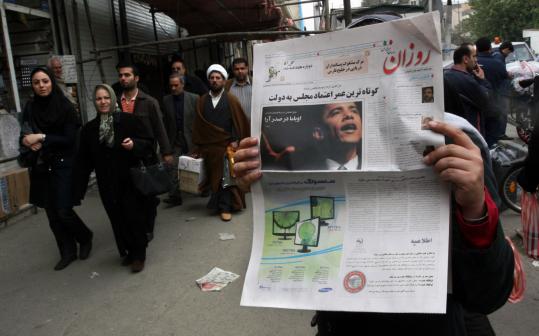 The US election was big news in Tehran yesterday, as the daily newspaper Rozan led with a photo of President-elect Barack Obama. The Bush administration has clashed with Iran over that country's nuclear programs. (Hasan Sarbakhshian/Associated Press)
By Andrew J. Bacevich November 6, 2008
Text size – +

WITH Barack Obama's election to the presidency, the evangelical moment in US foreign policy has come to an end. The United States remains a nation of believers, with Christianity the tradition to which most Americans adhere. Yet the religious sensibility informing American statecraft will no longer find expression in an urge to launch crusades against evil-doers.

Like our current president, Obama is a professed Christian. Yet whereas George W. Bush once identified Jesus Christ himself as his favorite philosopher, the president-elect is an admirer of Reinhold Niebuhr, the renowned Protestant theologian.

Faced with difficult problems, conservative evangelicals ask WWJD: What would Jesus do? We are now entering an era in which the occupant of the Oval Office will consider a different question: What would Reinhold do?

During the middle third of the last century, Niebuhr thought deeply about the complexities, moral and otherwise, of international politics. Although an eminently quotable writer, his insights do not easily reduce to a sound-bite or bumper sticker.

At the root of Niebuhr's thinking lies an appreciation of original sin, which he views as indelible and omnipresent. In a fallen world, power is necessary, otherwise we lie open to the assaults of the predatory. Yet since we too number among the fallen, our own professions of innocence and altruism are necessarily suspect. Power, wrote Niebuhr, "cannot be wielded without guilt, since it is never transcendent over interest." Therefore, any nation wielding great power but lacking self-awareness - never an American strong suit - poses an imminent risk not only to others but to itself.

Here lies the statesman's dilemma: You're damned if you do and damned if you don't. To refrain from resisting evil for fear of violating God's laws is irresponsible. Yet for the powerful to pretend to interpret God's will qualifies as presumptuous. To avert evil, action is imperative; so too is self-restraint. Even worthy causes pursued blindly yield morally problematic results.

Niebuhr specialized in precise distinctions. He supported US intervention in World War II - and condemned the bombing of Hiroshima and Nagasaki that ended that war. After 1945, Niebuhr believed it just and necessary to contain the Soviet Union. Yet he forcefully opposed US intervention in Vietnam.

The vast claims of Bush's second inaugural - with the president discerning history's "visible direction, set by liberty and the Author of Liberty" - would have appalled Niebuhr, precisely because Bush meant exactly what he said. In international politics, true believers are more dangerous than cynics.

Grandiose undertakings produce monstrous byproducts. In the eyes of critics, Abu Ghraib and Guantanamo show that all of Bush's freedom talk is simply a lie. Viewed from a Niebuhrean perspective, they become the predictable if illegitimate offspring of Bush's convictions. Better to forget utopia, leaving it to God to determine history's trajectory.

On the stump, Obama did not sound much like a follower of Niebuhr. Campaigns reward not introspection, but simplistic reassurance: "Yes, we can!" Yet as the dust now settles, we might hope that the victor will sober up and rediscover his Niebuhrean inclinations. Sobriety in this case begins with abrogating what Niebuhr called "our dreams of managing history," triggered by the end of the Cold War and reinforced by Sept. 11. "The course of history," he emphasized, "cannot be coerced."

We've tried having a born-again president intent on eliminating evil. It didn't work. May our next president acknowledge the possibility that, as Niebuhr put it, "the evils against which we contend are frequently the fruits of illusions which are similar to our own." Facing our present predicament requires that we shed illusions about America that would have offended Jesus himself.

Obama has written that he took from reading Niebuhr "the compelling idea that there's serious evil in the world" along with the conviction that evil's persistence should not be "an excuse for cynicism and inaction." Yet Niebuhr also taught him that "we should be humble and modest in our belief we can eliminate those things." As a point of departure for reformulating US foreign policy, we could do a lot worse.

Andrew J. Bacevich, a professor of history and international relations at Boston University, is the author of "The Limits of Power: The End of American Exceptionalism."