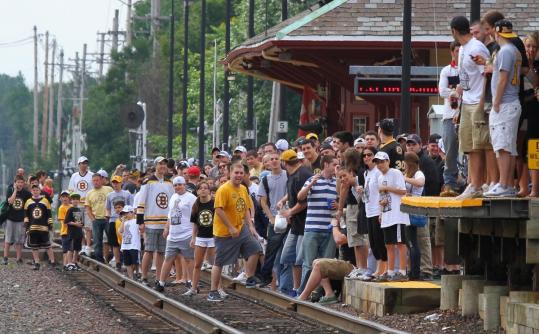 RE SUNDAY’S Metro article on the Boston Bruins’ parade (“Bruins fans feel stranded by rail lines’’): A tremendous effort by the employees of Massachusetts Bay Commuter Railroad Co. and the MBTA resulted in an unprecedented transportation success on the day of the Bruins’ victory parade downtown. Commuter rail carried tens of thousands of people — a passenger load greater than a typical morning rush hour — to the festivities.

Throughout the day, train crews operated more than 90 extra trains, including restored service on three Old Colony lines that were scheduled to be closed on weekends for ongoing infrastructure improvements. Crews reported no equipment malfunctions and functional air conditioning on every coach (critically important, given the volume of passengers). Mechanical crews worked tirelessly to combine coaches into “super-sized’’ trains, providing as much capacity as possible. Every available locomotive and coach was put into service.

For the parade, MBCR and the MBTA had one objective: to get as many passengers as possible safely to Boston. I am confident that Bruins fans who rode commuter rail that day would agree that we accomplished that mission.