The true source of Bahrain’s unrest 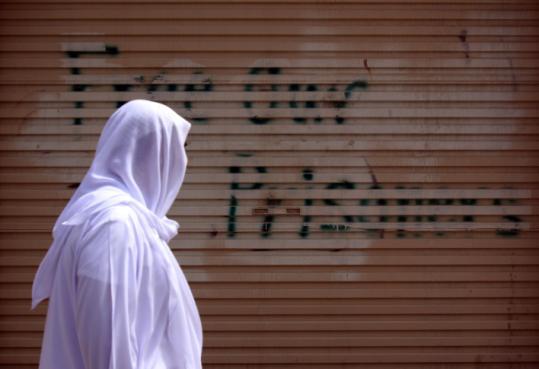 A Bahraini man passed graffiti, partly painted over by authorities, that calls for the release of people detained during an antigovernment uprising in the northern Shi’ite Muslim village of Diraz. (Hasan Jamali/ Associated Press)
April 18, 2011

JULIETTE KAYYEM (“Bahrain is the line in the sand,’’ Op-ed, April 9) informs Globe readers that Iran is seen as “a guiding force’’ in the Arab uprisings, especially in Bahrain. There is no credible evidence that Iran guided, planned, or inspired the peaceful demonstrations that began in mid-February, notwithstanding the sometime shrill claims of the Bahraini monarch and his entourage. It is striking that Kayyem, a former official in the Department of Homeland Security, has nothing to say about the economic despair and discrimination that afflict the majority of Bahrain’s population — factors that lent impetus to the protests but that have been minimized by the rulers.

Kayyem makes the odd claim that Saudi Arabia and the United Arab Emirates intervened after an opportunity for reform had been missed. It is quite likely that the Saudi-led intervention was precisely intended to sabotage US-encouraged reforms. The Saudi monarchy has long been committed to quashing reform, both inside the kingdom and in the smaller states of the Gulf, not least in its Bahraini dependency.

The repression, censorship, and punitive policies now being pursued in Bahrain may open up opportunities for Iranian meddling, but this will stem from the avoidance of reform, not from people peacefully seeking better treatment from their government.

The writer is a professor of anthropology and international relations at Boston University.