For car-free overpass at Forest Hills, follow path back to experience in ’89 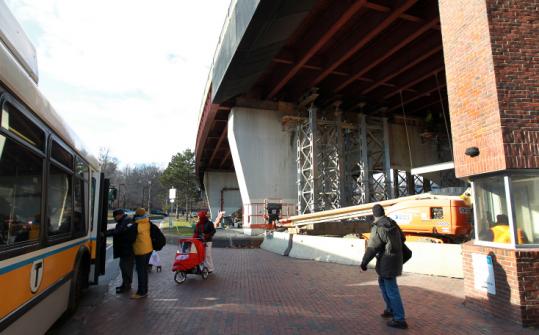 Work has been ongoing at the Casey Overpass near Forest Hills. The state is exploring how to replace the span or whether to replace it at all. (Pat Greenhouse/Globe Staff)
January 17, 2011

IT IS pleasing to read that the Massachusetts Department of Transportation is considering alternatives in exploring whether to reconstruct or remove the Casey Overpass at Forest Hills (“Demise of overpass may help reconnect a necklace,’’ Metro, Jan. 7). There’s at least one solid example that could reinforce the notion that a pedestrian bridge would not only serve the public interest better but would reconnect the magnificent Emerald Necklace, as the article implies.

In 1989, as commissioner of the Metropolitan District Commission, I was confronted with the possibility of a catastrophic collapse of the bridge when my inspectors discovered structural cracks throughout the span. I ordered an immediate shutdown of the overpass, and the Metropolitan Police were instructed to manage the rerouting of traffic so that emergency repairs could proceed immediately. Interestingly, and contrary to our expectations, traffic continued to move smoothly by way of alternative routes during the reconstruction and repair of the bridge.

Given the experience of 1989, I would strongly recommend that a pedestrian-friendly overpass that incorporates a bicycle path should be given a high priority in any evaluation process. Such an overpass would certainly add to the beauty of the area without having a significant impact on vehicular traffic. And it could still be called Casey Overpass.

What a delightful walk or bike ride it would be from Arnold Arboretum to the Franklin Park Zoo.

M. Ilyas Bhatti
Canton
The writer is a professor of construction management at Wentworth Institute of Technology.