Misinformation, and much missing in column’s view 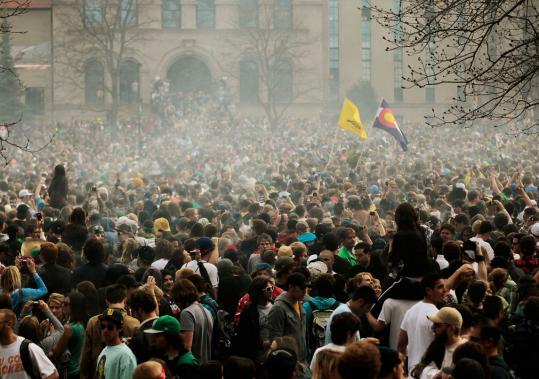 Marijuana smoke drifted over a crowd of thousands at the University of Colorado in Boulder last Tuesday. April 20th has become a de facto holiday for marijuana advocates. (Chris Hondros/Getty Images)
April 25, 2010

ALEX BEAM’S “Gone to pot’’ (April 20, “g’’) begins with a flippant headline, followed by misdating the anniversary of the siege of Boston to 1776. The siege began late on April 19, 1775 and ended on Evacuation Day, the Suffolk County holiday that celebrates the British leaving on March 17, 1776.

As for substance, the debate over the continued prohibition of marijuana is whether we should repeal prohibition or perpetuate it.

By labeling those of us who seek repeal as “stoners,’’ Mr. Beam reveals his affection for the latter. That is his right, but missing from his column is disclosure of how many more people must to be arrested, prosecuted, and punished before marijuana will go away, how much that will cost and where the money will come from.

Those of us who seek repeal of the national prohibition know repeal will permit states, like Massachusetts where over 10 percent of people over 18 use it at least monthly, to bring the enormous underground commerce in marijuana into a regulated framework analogous to our regulation of beer, wine, and hard cider.

An estimated half-billion dollars a year in tax revenue could be harvested from a regulated commerce in marijuana. It would also open up the tremendous untapped potential of hemp as a resource for creating Massachusetts jobs in food, biofuels, and fiber production.

STEVEN S. EPSTEIN
Georgetown
The writer is an officer on the Massachusetts Cannabis Reform Coalition.

For patients, it’s no laughing matter
In “Gone to Pot’’ (April 20, “g’’), Alex Beam takes a light-hearted approach to examining the current state of marijuana reform in the region. He jokes about “weed people,’’ and even makes a sarcastic comment about the medical marijuana program in California. Readers should be aware that for patients with terminal illnesses like cancer or Lou Gehrig’s Disease, or serious conditions such as chronic pain or HIV, there is nothing funny about marijuana policy reform. Many writers find it difficult to report on marijuana issues without resorting to sensationalizing “stoner culture,’’ but unfortunately such articles rarely acknowledge the seriousness of medical marijuana reform. While the Extravaganja was being celebrated in Amherst, countless medical marijuana patients and advocates chose instead to attend the Patients Out of Time conference held in Warwick, Rhode Island. Doctors and scientists came from around the world to participate in the event, which included two days of presentations on the latest science about how marijuana can be used therapeutically.

MATTHEW ALLEN
Boston
The writer is the organizer for the Massachusetts Patient Advocacy Alliance.

Cartel victims
I UNDERSTAND the often flippant remarks about the legalization of marijuana, but here in Texas it’s a very serious matter concerning the blood of innocent victims. Mexican government estimates are that 61 percent of murderous cartel revenue comes from marijuana.

The National Academy of Sciences’ 1982 report pointed out that if some states could voluntarily control their own policy, without federal interference, any who chose legalization would provide invaluable information to all states. That US tradition is what states should be instructing federal legislators to allow, which Representative Barney Frank is working toward.

JERRY EPSTEIN
Houston
The writer is president of the Drug Policy Forum of Texas.