Boston improving, but must focus on infrastructure, outreach 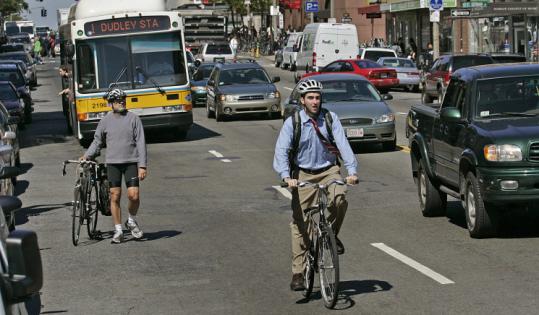 WITH TWO tragic bicycling accidents in a week, there is talk about bicycle safety (“Cyclists urging safety measures after fatal crash,’’ Metro, April 9). There are more people riding their bikes around Boston every day, so as things stand now we’re bound to hear more tragic stories.

While the number of bicycle lanes is growing, progress is slow. Our efforts to educate drivers and riders on their rights and responsibilities badly trail efforts to develop infrastruc- ture.

While Boston has risen from the ranks of being the least friendly bike city to 26th out of 50 in Bicycling Magazine’s annual ranking, one wonders how much more progress would have been made had bike program director Nicole Freedman eschewed the hours of time and planning required to develop the not yet unveiled bike share program and put it into promoting more awareness and street improvements.

If there were a great biking infrastructure and riding Boston’s streets was viewed as a safe and viable alternative, there would be plenty of private businesses in line to rent bicycles by the hour. Certainly this is true in many other more bike-friendly cities around the United States.

Here’s hoping that Boston’s bicycling bureaucracy will concentrate on changing planners’ thinking about how to integrate multiple modes into our transportation environment and on developing a comprehensive outreach program for drivers and riders alike.