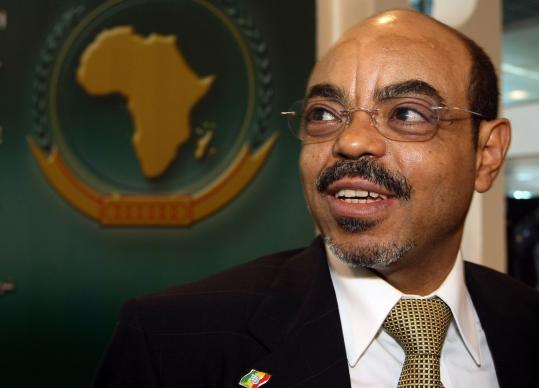 ADDIS ABABA, Ethiopia — Meles Zenawi, Ethiopia’s longtime ruler and a major US counter-terrorism ally who is credited with economic gains but blamed for human rights abuses, died of an undisclosed illness after not being seen in his East African country for weeks, Ethiopian authorities said Tuesday. He was 57.

Mr. Meles died in a Belgian hospital Monday after contracting an infection.

The death is not likely to have an impact on the strong US diplomatic and military relations with Ethiopia, given the handpicked nature of the transition of power.

Mr. Meles had not been seen in public for about two months. In mid-July, after he did not attend a meeting of heads of state of the African Union in Addis Ababa, Ethiopia’s capital, speculation ­increased that his health problems were serious. Ethiopian officials gave no details and said the prime minister was in ‘‘very good’’ health and would return to office.

Opponents accuse him of killing and jailing opposition members and rigging elections. Ethiopia’s Somalia community in particular has suffered under Mr. Meles, who won his last election in 2010 with a reported 99 percent of the vote.

UN Secretary General Ban Ki-moon said Mr. Meles ‘‘will be remembered for his exceptional leadership and advocacy on African issues within and outside the continent.”

Mr. Meles became president in 1991 after helping to oust Mengistu Haile Mariam’s Communist military junta, which was responsible for hundreds of thousands of Ethiopian deaths. Mr. Meles became prime minister in 1995, head of the government and the armed forces.

The United States has long viewed Mr. Meles as a strong security partner and has given hundreds of millions of dollars in aid over the years. US military drones that patrol East ­Africa are stationed in Ethiopia.

Though a US ally, Ethiopia has long been criticized by human rights groups for the government’s strict control, and Mr. Meles’s legacy is likely to be mixed: positive on the economic development side and negative on the human rights side, said Leslie Lefkow, the deputy director for Human Rights Watch in Africa.

Mr. Meles brought Ethiopia out of a difficult period following Mengistu’s rule and made important economic progress, she said.

‘‘I think on the human rights side his legacy will be much more questionable,’’ Lefkow said. “The country remains under a very tightly controlled one-party rule, and this will be the challenge for the new leadership.”

Under Mr. Meles, Ethiopia saw strong gains in education with the construction of new schools and universities, and women gained more rights.

Mr. Meles grew up in Adwa, where his father had 13 siblings. He moved to the capital, Addis Ababa, on a scholarship.

Mr. Meles was the third African leader to die in office this year, following deaths in Malawi and ­Ghana. He leaves his wife, Azeb Mesfin, a member of Parliament, with whom he had three children.