Giffords: A simple message of unity 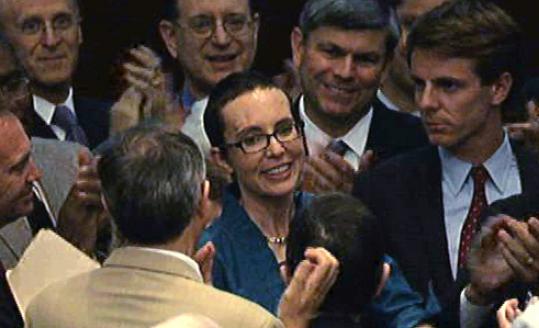 Representative Gabrielle Giffords is greeted on the floor of the House of Representatives Monday. (Associated Press/House Television)
August 3, 2011

Weeks of negotiations over the debt ceiling brought out the worst in Washington, as partisan deadlock came close to causing a massive economic crisis. But at a crucial moment in the drama - when the vote in the House was still up in the air with only two minutes remaining Monday night - US Representative Gabrielle Giffords suddenly appeared on the floor of Congress for the first time since the attempt on her life in January.

By interrupting her recovery to vote in the House, the Arizona congresswoman underscored the vital importance of the legislation in question. But more than that, Giffords’s return provided an increasingly rare moment of unity in Washington. Political figures ranging from Michele Bachmann to Joe Biden embraced her. And while Giffords’s wounds have left it difficult for her to speak, she was still able to express one simple message to her colleagues - telling them, “I love you.’’

The Capitol needed this brief glimpse of human decency. In these last few weeks, the partisan divide often seemed uncrossable, as lawmakers and administration officials lobbed accusations of dishonesty and bad faith back and forth. Giffords, who was critically injured during a public meeting with her constituents, offered her fellow members a reminder that their offices are solemn responsibilities, and that as they go about their duties, the country’s well-being is at stake.