China: A new low in knockoffs 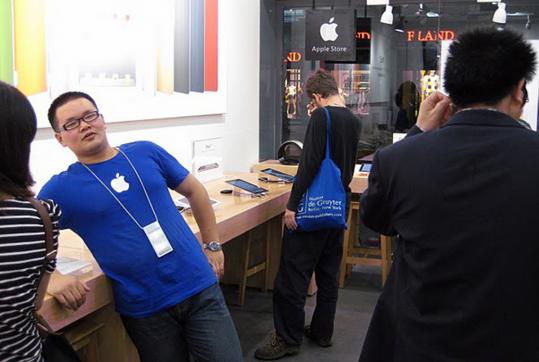 It isn’t shocking, unfortunately, to see an iPod knockoff being sold on a street corner in China. But the existence of an entire knockoff Apple Store speaks to far deeper piracy problems.

In Kunming, a city in southwest China, black-market entrepreneurs built five stores that looked like Apple’s trademark gleaming white retail outposts. After an American expat blogged about the fake stores, officials closed two of them. But authorities insisted, according to the Associated Press, that they couldn’t legally shutter the other three stores, as they weren’t selling any fake Apple products. This tepid response shows the degree to which China tolerates the theft of intellectual property.

The closings of the shops are essentially a Band-Aid on an epidemic. Knockoffs of American brands are constantly sold on Chinese streets and in stores while authorities do little to stop it. Illegal commerce stretches past shoes and electronics and into the booming market for computer software. By one estimate, a staggering 80 percent of the programs running on PCs in China has been pirated.

China has made numerous promises to rectify the situation, and on July 11 the Chinese government launched a new website touting a nine-month campaign against intellectual-property violations. But this needs to be a permanent effort, not a nine-month one, and it’s hard to argue that much progress has been made when knockoff products are being sold in knockoff stores.