A basis for honest debate 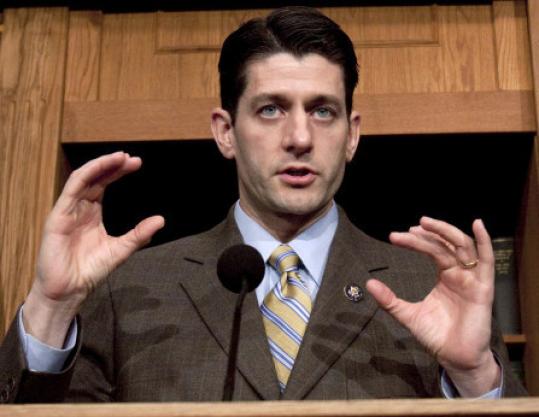 AFTER US Representative Paul Ryan, a conservative Republican from Wisconsin, put forth a far-reaching “roadmap’’ this year that would balance the federal budget by chopping spending, uprooting the employer-based health insurance system, and reconceiving Social Security and Medicare, a few commentators on the left hailed the plan for its intellectual honesty — while also brandishing it as a list of all the nasty things the GOP might do if returned to power in this fall’s election.

The GOP leadership, meanwhile, has paid scant attention to Ryan’s effort, offering instead a vague “Pledge to America’’ that mostly reiterates familiar stances. But ignoring the plan — or using it merely to scapegoat its author for some unpopular stances — is a disservice both to Ryan and to the country. Voters deserve what Ryan, the top Republican on the House Budget Committee, calls an “adult conversation’’ about the nation’s troubling long-term financial picture.

Even without the costs of two long wars and last year’s stimulus package, the national treasury would be in peril, as benefits promised to future Social Security recipients exceed projected revenues. And especially as health care costs continue to climb, the mismatch for Medicare is even worse. Ryan’s solutions may not be the best answers to these problems, but they’re consistent with his principles. And he’s tried, at least, to make the math work out.

Many of his proposed changes seem dictated more by ideology than budgetary wisdom — for instance, a tax reform that likely offers major cuts for the wealthiest taxpayers but increases for the middle class. His proposal to eliminate estate and capital-gains taxes would deepen the financial hole. And his reliance on a high rate of stock appreciation to make up for reductions in Social Security benefits reflects a conventional wisdom that may not hold true in the future. Of course, a willingness to move past familiar talking points would be helpful all around; even as Democrats vow to protect Medicare and Social Security, they must not ignore the severity of the projected financial problem — or expect to solve it solely by raising taxes on future workers.

Ryan, at least, has signaled that he’s flexible on the particulars. And on a few key issues, his instincts seem close enough to President Obama’s that some compromise seems possible. More than a previous generation of Democratic politicians, Obama has shown an interest in mandatory-savings plans and other measures that nudge citizens to look out for their own interests. Aspects of Ryan’s proposals for Social Security reflect similar thinking.

It’s a shame that few of his fellow Republicans have signed on to Ryan’s roadmap, because to do so would at least signal a real desire for solutions. Ryan, to his credit, isn’t just making loud noises about deficits. He’s offering a serious, if flawed, proposal to deal with them.