Concerned about rising tuition? Look at the coaches’ salaries 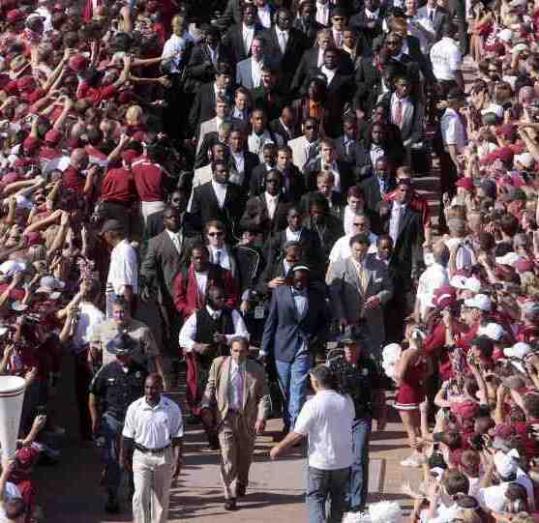 Thousands of students cheered on coach Nick Saban and the Alabama Crimson Tide before their first game this season. Saban is one of the college coaches who makes millions a year. (Jamie Martin/Associated Press)
September 13, 2010

DEALING WITH the cost of higher education isn’t exclusively a matter of parents reaching further into their pockets or taxpayers ponying up more financial aid: Colleges and universities have to become more efficient. They need to believe that lowering tuition, or at least slowing its growth, is their responsibility, not society’s. And before getting all puffed up about how cuts could undermine their academic missions, major universities should look hard at what they’re paying their sports coaches.

It’s long been noted that top-paid basketball and football head coaches make $4 million to $5 million a year, while salaries for assistant coaches have hit the $1 million mark. Those sports happen to bring in revenue in ticket sales and contributions from loyal alumni. But salary inflation extends well beyond the packed stadiums and into the distant playing fields of lower-profile sports.

Five baseball coaches in the Southeastern Conference make at least $500,000 a year, surpassing the $436,111 median pay of public-university presidents. Schools like Florida, Oklahoma, and Ohio State pay volleyball, softball, baseball, and even strength-and-conditioning coaches double and triple what they pay full professors. At Ohio State, according to a 2009 Columbus Dispatch story, the $331,000 salary of the baseball coach was more than triple the entire ticket revenue for that sport.

As a result, most sports programs tend to be money losers, even at universities with tens of millions in ticket revenue. A recent National Collegiate Athletic Association report found that at the top of Division 1, only 14 of 120 athletic programs made money in 2009, down from 25 in 2008. The median losses by athletic departments exploded by 26 percent in just one year, from $8.1 million to $10.2 million. As they try to outdo one another, schools in the Atlantic Coast Conference, the Big Ten, the Big 12, and the Southeastern Conference spend between $106,000 and $145,000 per athlete, according to a June report by the Knight Commission on Intercollegiate Athletics.

The wild spending is often justified on notions that high-caliber teams are a seductive “front porch’’ to invite alumni dollars and better students. Indeed, a Globe story last week on the challenges facing UMass Amherst quoted a Boston Latin student who chose Wisconsin over UMass because, “It’s a lot more fun to cheer when you have 70,000 other people cheering with you.’’ That might be true for that student, but last year the Congressional Budget Office concluded, “There is no evidence suggesting that athletic programs increase the overall amount of charitable contributions . . . or the average quality of students attending all colleges.’’

But there’s another, less honorable, explanation for the run-up in coach’s salaries: Athletic directors compete to see who has the best overall won-loss record, spanning all sports. Thus, they throw big money at the winningest coaches. That smacks not only of misplaced priorities, but financial irresponsibility. University presidents take note: Only managers operating with no sense of limits would make such decisions.

At the current pace of spending, the Knight Commission estimates that each of the budgets of the top 10 public-university athletic powers will surpass $250 million by 2020, or five times that of the current NCAA median for athletic department expenses. There is nothing wrong with school pride. But with everyday students drowning in debt, college presidents need to curb their pride and stop throwing fools gold at coaches.