Concord: The drips heard 'round the world 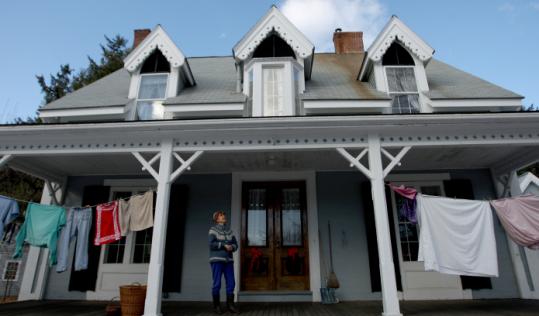 Peggy Brace asked the Concord Town Meeting to support the use of clotheslines, and to bar homeowners’ associations from standing in the way of line-drying. (Essdras M Suarez/Globe Staff/File)
May 4, 2010

First, the Town of Concord. Next, the world. Environmentalists in Concord scored an important victory last week when residents at Town Meeting passed the state’s first “right to dry’’ measure. Homeowners’ associations and real estate contracts in Concord can no longer prohibit the use of clotheslines.

Largely overshadowed by the town’s controversial decision to ban the sale of bottled water, the clothesline vote stemmed from the efforts of Peggy Brace, a Concord resident who hangs her own laundry on her front porch. The sight of someone else’s skivvies, Brace believes, is far less a danger than energy overuse. So at Town Meeting, she showed photos of Italian villages crisscrossed by charming laundry lines, lamented the effects of coal mining, and shared some stark statistics: a nightlight uses 5 watts of energy, a vacuum cleaner 1,000 watts, a clothes dryer 5,000 watts.

Brace’s measure will not affect existing developments that ban clotheslines. But town planning officials will talk to future developers about potential compromises, such as establishing designated areas for laundry-hanging. Brace hopes the measure’s greater effect will be to spread awareness of the perils of the dryer — and to destigmatize, even glamorize, the act of hanging clothes. “I think in a few years, you’ll see flapping laundry lines all over Concord,’’ she says. That’s hard to fathom now, but big change truly can start small.