Across the Middle East and the world this week, preparations have been made for major holidays of different faiths. As Hajj culminates, the Muslim holiday Eid al-Adha is celebrated this weekend. Yom Kippur completes the period of High Holy Days for the Jewish community. --Leanne Burden Seidel (20 photos total) 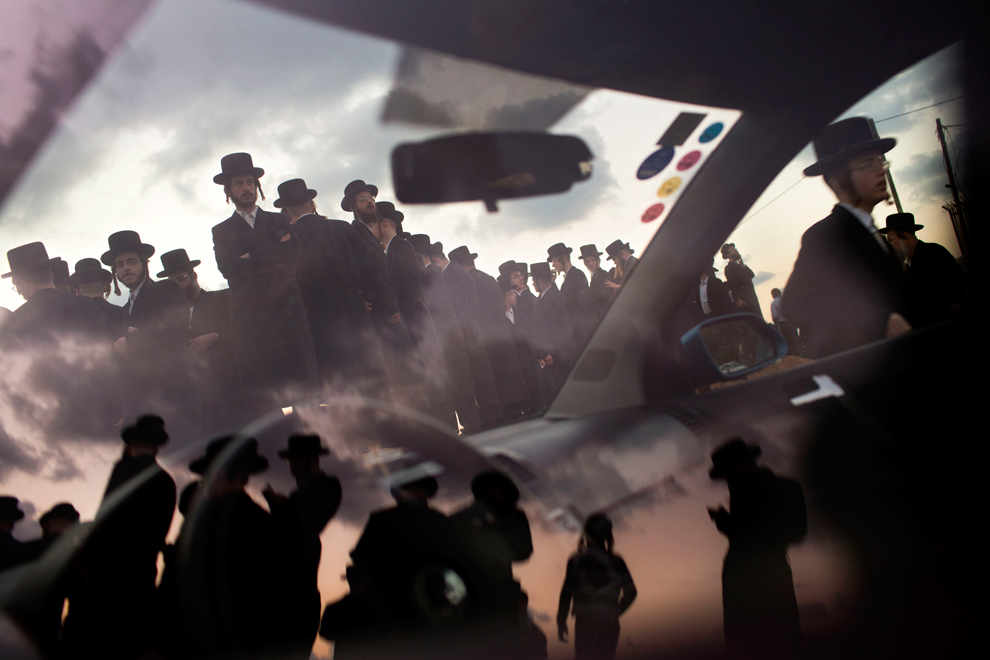 Ultra-Orthodox Jews reflect on a car window as they gather on a hill overlooking the Mediterranean sea as they participate in a Tashlich ceremony in Herzeliya, Israel, Oct. 2. Tashlich, which means "to cast away" in Hebrew, is the practice by which Jews go to a large flowing body of water and symbolically "throw away" their sins by throwing a piece of bread, or similar food, into the water before the Jewish holiday of Yom Kippur, which start on Friday. (Oded Balilty/Associated Press) 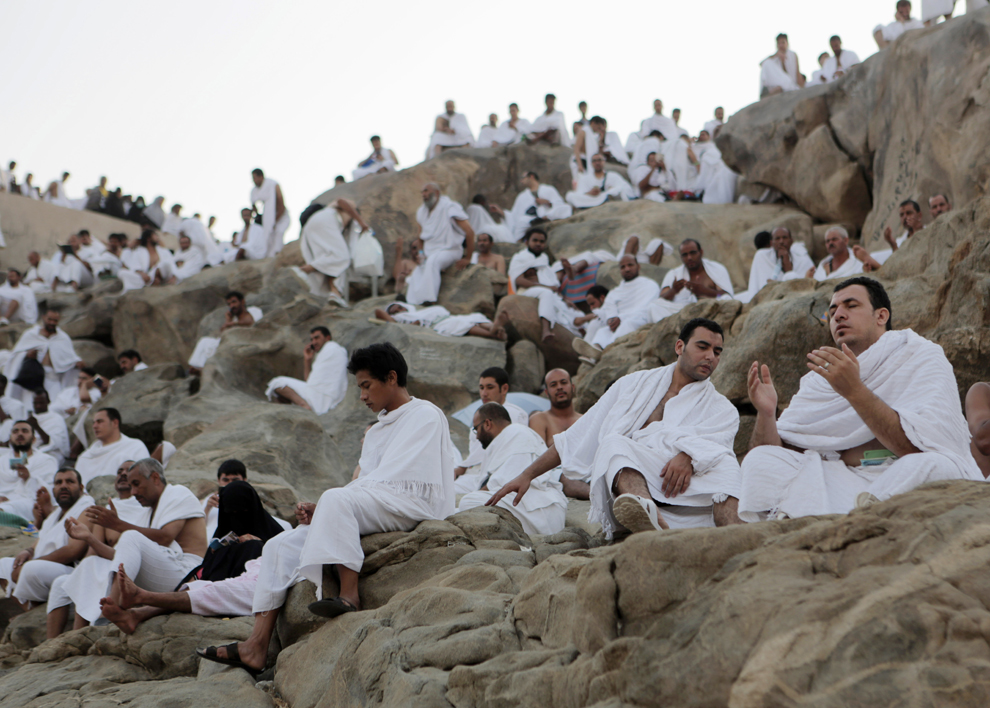 2
Muslim pilgrims gather to pray at Jabal Al Rahma holy mountain, or the mountain of forgiveness, during the annual pilgrimage, known as the hajj, near Mecca, Saudi Arabia, Oct. 3.(Khalid Mohammed/Associated Press) # 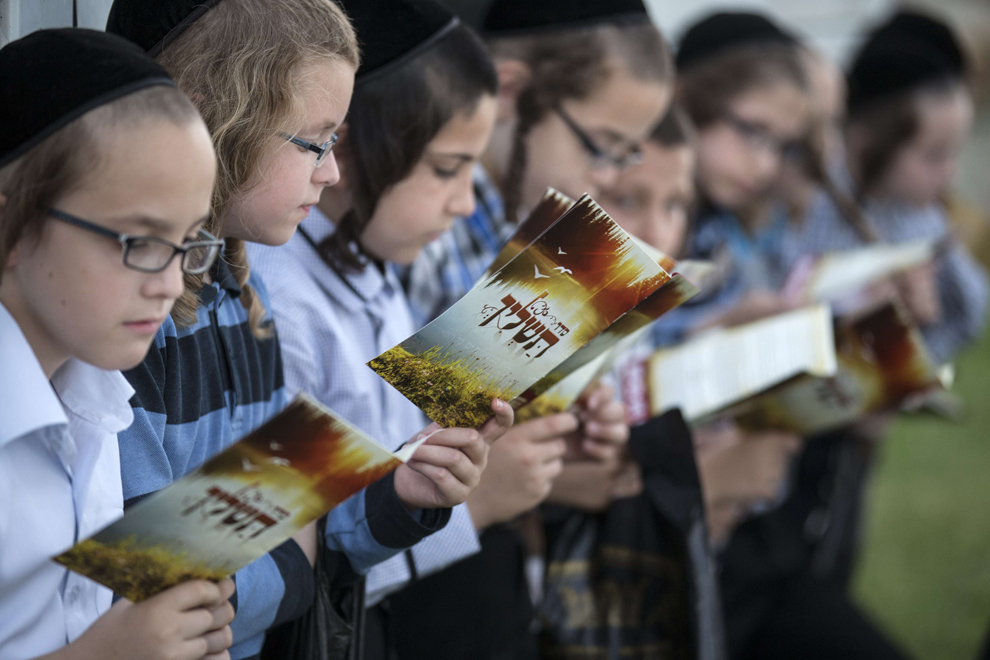 3
Ultra-Orthodox Jewish boys pray along the Ayarkon River in the city of Ramat Gan near Tel Aviv during the ritual of "Tashlich" on Oct. 2. Tashlich is performed one day before the Day of Atonement or Yom Kippur. (Jack Guez/AFP/Getty Images) # 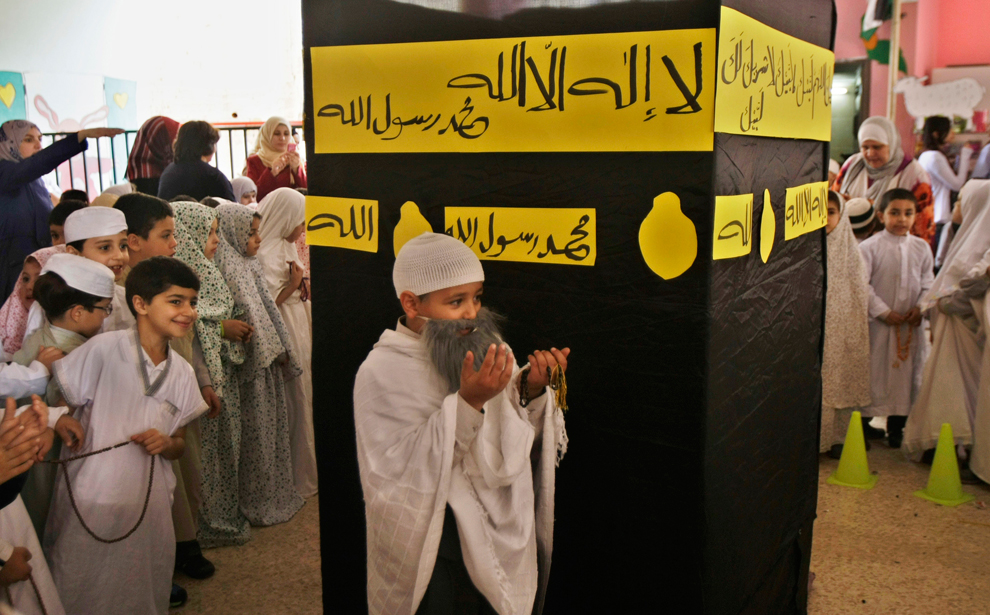 4
Palestinian students gather around a model that represents the Kaaba in Mecca, Saudi Arabia that is one of the most sacred sites in Islam, in a school in the West Bank city of Nablus, Sept. 30. The display is part of a lesson students receive on the Hajj, or pilgrimage, to Mecca. Every Muslim is required to perform the Hajj at least once in his or her lifetime if able to do so. (Nasser Ishtayeh/Associated Press) # 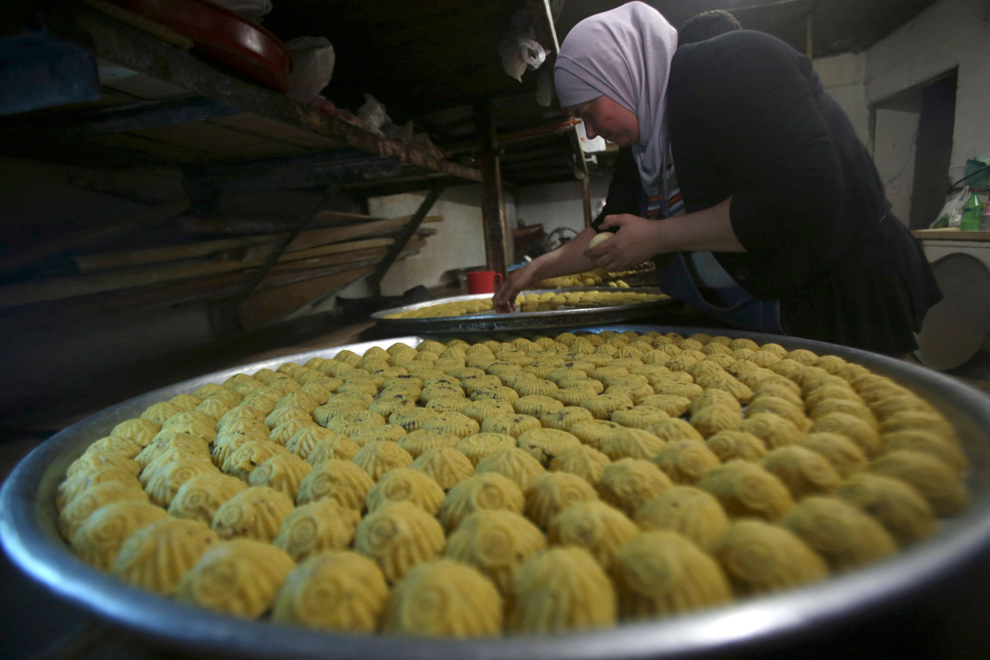 5
A Palestinian worker prepares traditional cakes in a shop at a market ahead of Eid al-Adha in the West Bank city of Nablus, Sept. 30. (Abed Omar Qusini /Reuters) # 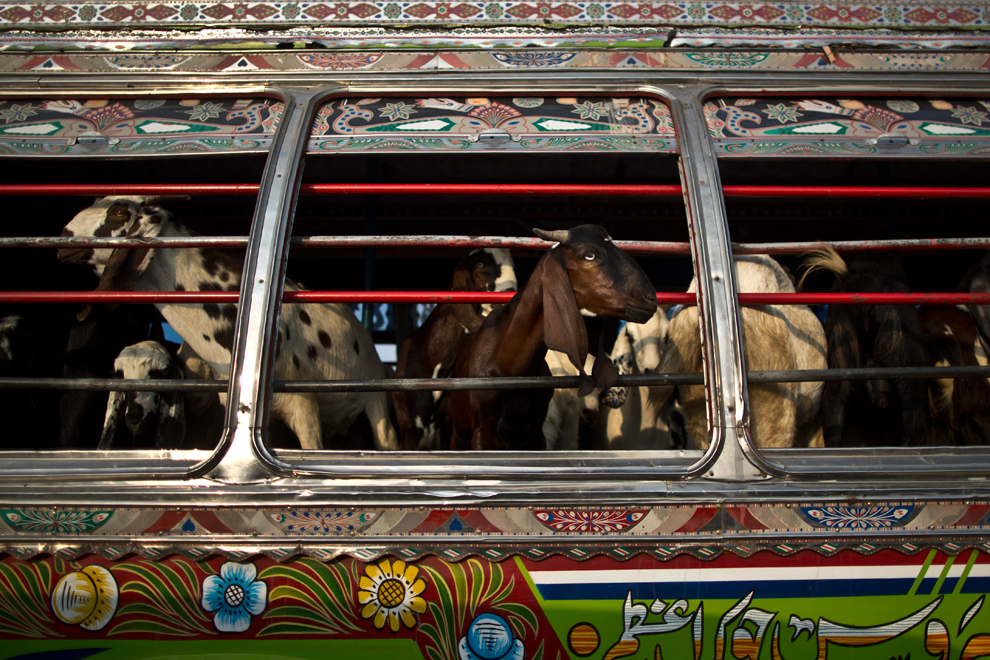 6
Goats look out of a bus window, while being transported to a near by livestock market, to be displayed for sale in preparation for the upcoming Muslim holiday of Eid al-Adha, or "Feast of Sacrifice", on the outskirts of Islamabad, Pakistan, Oct. 2. (Muhammed Muheisen/Associated Press) # 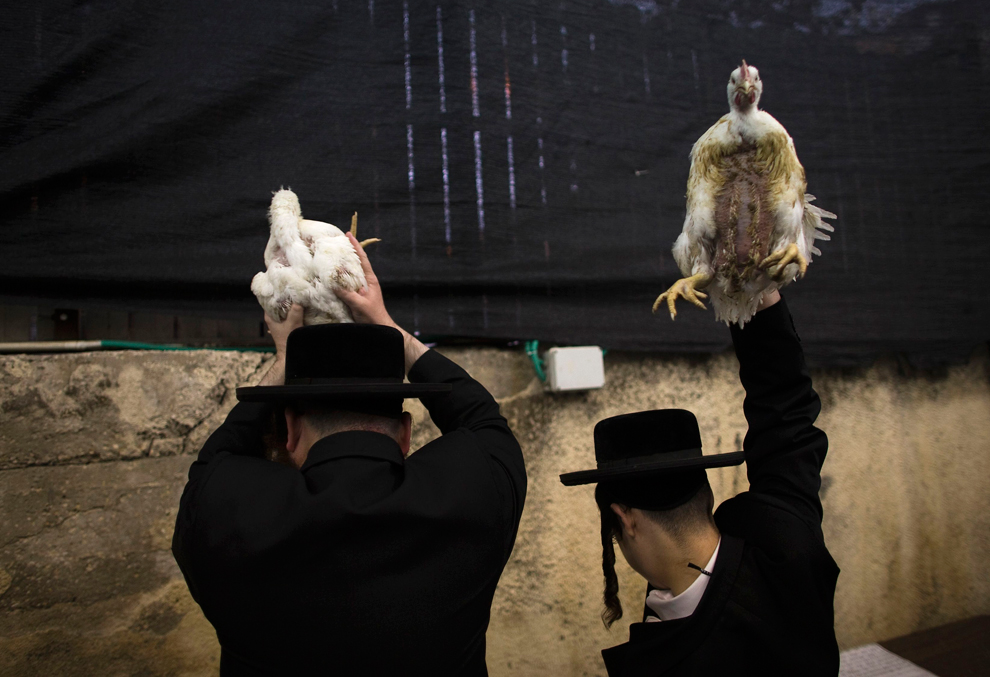 7
Ultra-Orthodox Jews hold chickens over their heads as they perform the Kaparot ritual in Jerusalem early morning Oct. 2,, ahead of Yom Kippur, the Jewish Day of Atonement, which starts at sundown on Friday. (Ronen Zvulun/Reuters) # 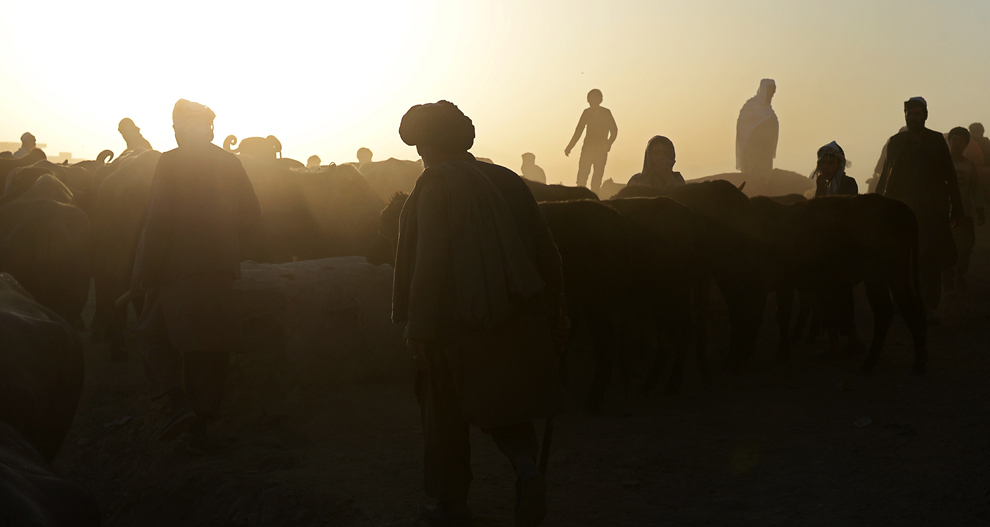 8
Afghan traders walk with their animals at a livestock market ahead of the sacrificial Eid al-Adha festival early in the morning in Kabul on Oct. 2. Muslims across the world are preparing to celebrate the annual festival of Eid al-Adha, or the Festival of Sacrifice, which marks the end of the Hajj pilgrimage to Mecca and commemorates Prophet Abraham's readiness to sacrifice his son to show obedience to God. (Shah Marai/AFP/Getty Images) # 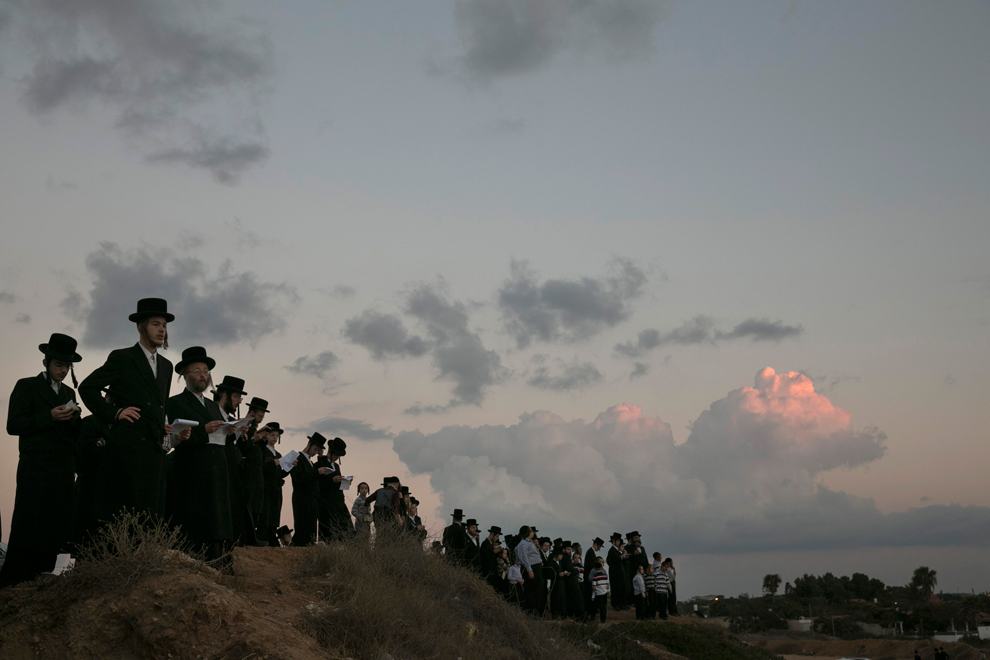 9
Jewish worshippers take part in the Tashlich ritual on the shore of the Mediterranean Sea in Herzliya, near Tel Aviv Oct. 2,, ahead of Yom Kippur. (Baz Ratner/Reuters) # 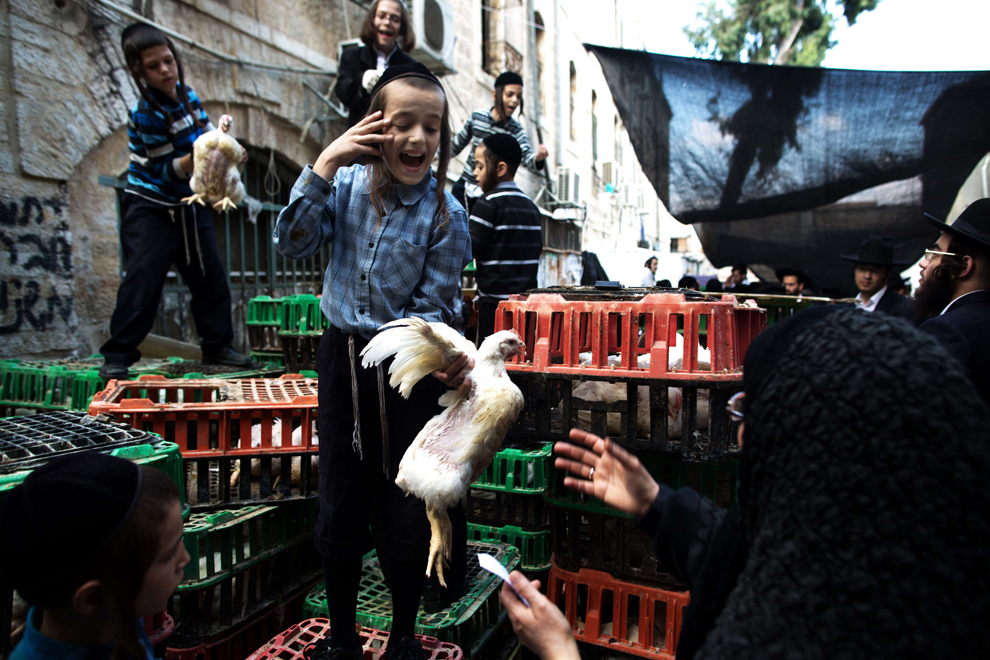 10
Ultra-Orthodox Jewish children help sell chickens during the Kaparot ceremony in Jerusalem on Oct 2. The Jewish ritual is supposed to transfer the sins of the past year to the chicken, and is performed before the Day of Atonement, or Yom Kippur, the most important day in the Jewish calendar. (Menahem Kahana/AFP/Getty Images) # 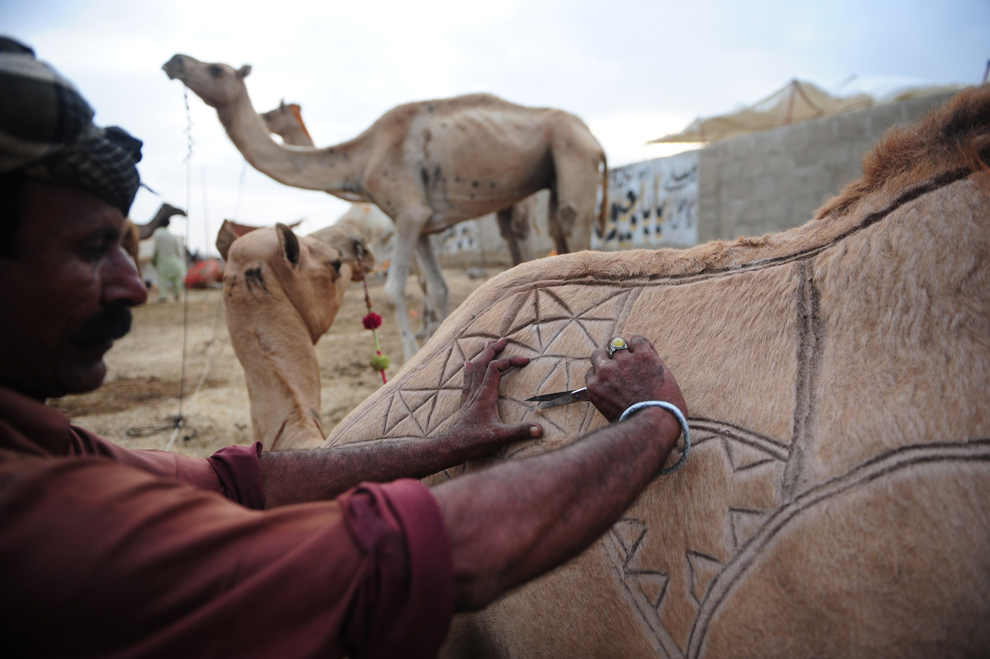 11
A Pakistani livestock trader decorates a camel to attract customers at a market ahead of the sacrificial Eid al-Adha festival in Karachi on Oct. 1. (Asif Hassan/AFP/Getty Images) # 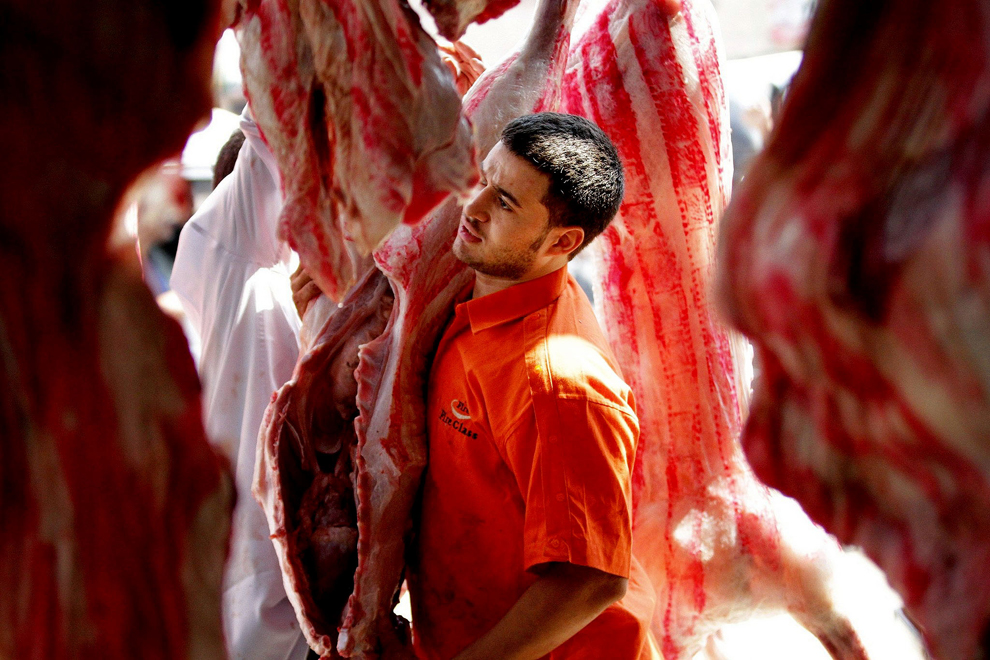 12
An Egyptian man carries meat in preparation for the Muslim holiday of Eid al-Adha at a butchers market in Cairo, Egypt, Oct. 2. (Hussein Tallal/Associated Press) # 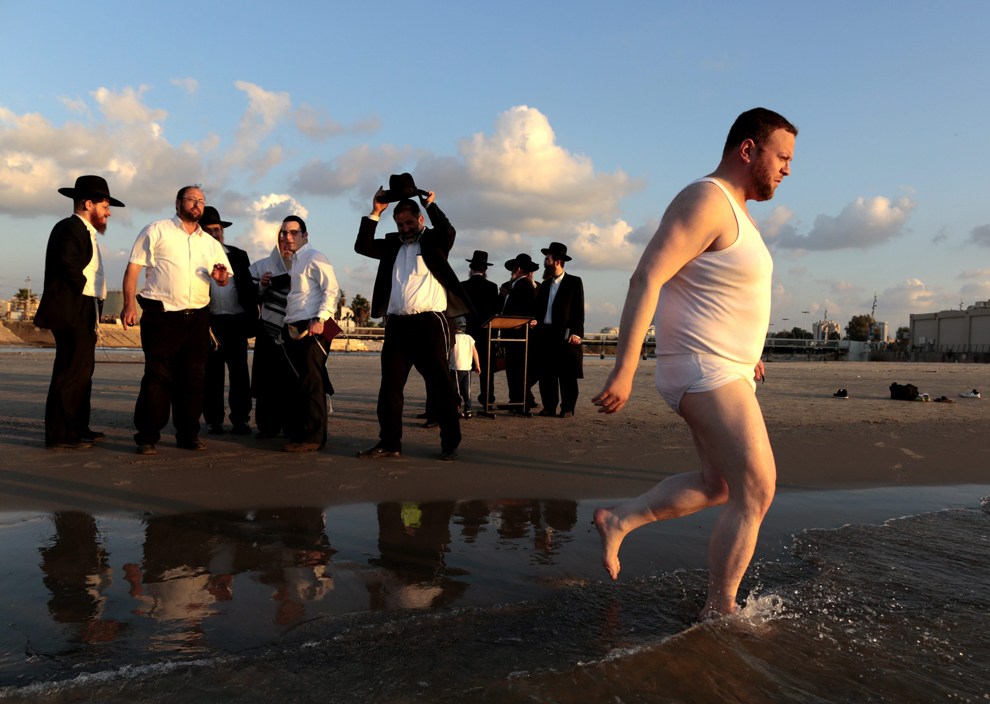 13
An Ultra-Orthodox Jew who removed his clothes goes into the Mediterran Sea on a beach in northern Tel Aviv, Israel, Oct. 2, after collecting hand written notes from a group of Jews (behind) in order to cast the notes into the sea as part of the Tashlich ceremony. During the ritual, all sins collected during the past year are cast off into a body of running water. (Jim Hollander/EPA) # 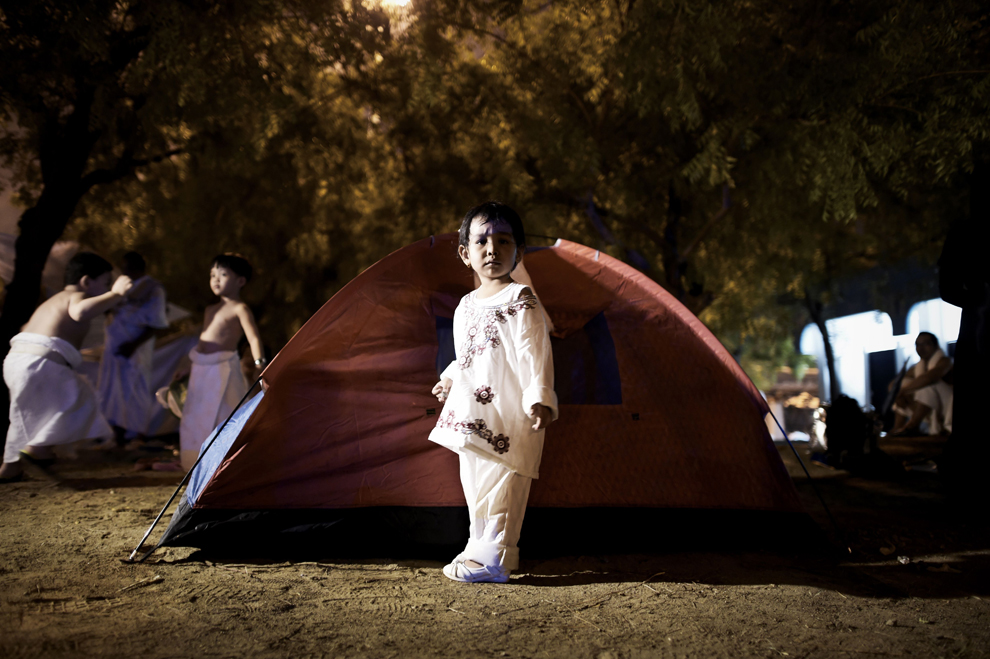 14
Indonesian Muslim pilgrims arrive at Mount Arafat, near the holy city of Mecca on Oct. 2. Vast crowds of Muslim pilgrims, all dressed in white, head to Mount Arafat, in western Saudi Arabia, to take part in the main rituals of the annual hajj. (Mohammed Al-Shaikh/AFP/Getty Images) # 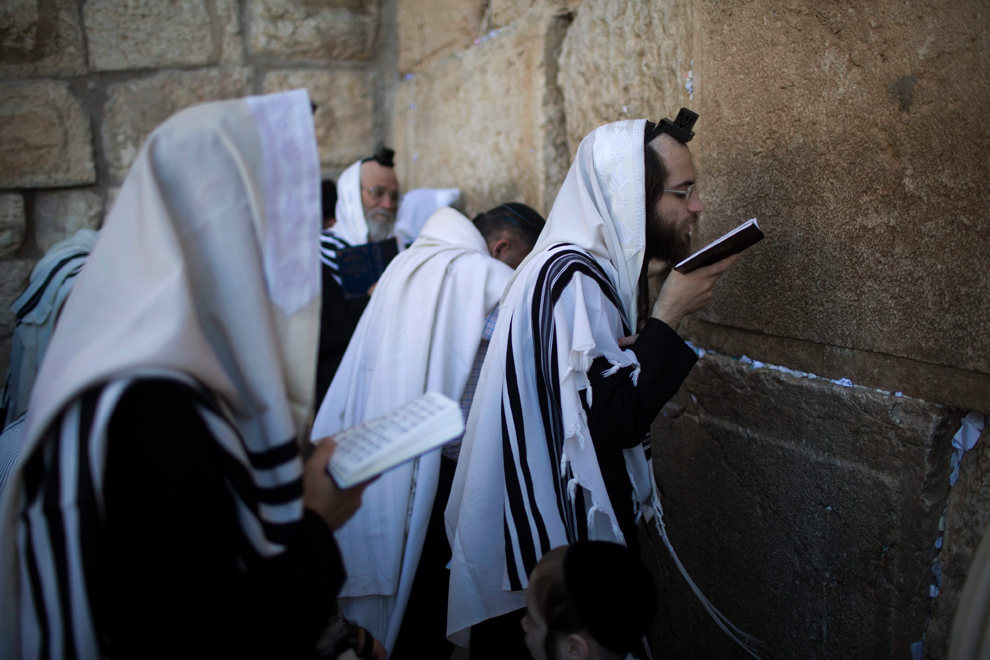 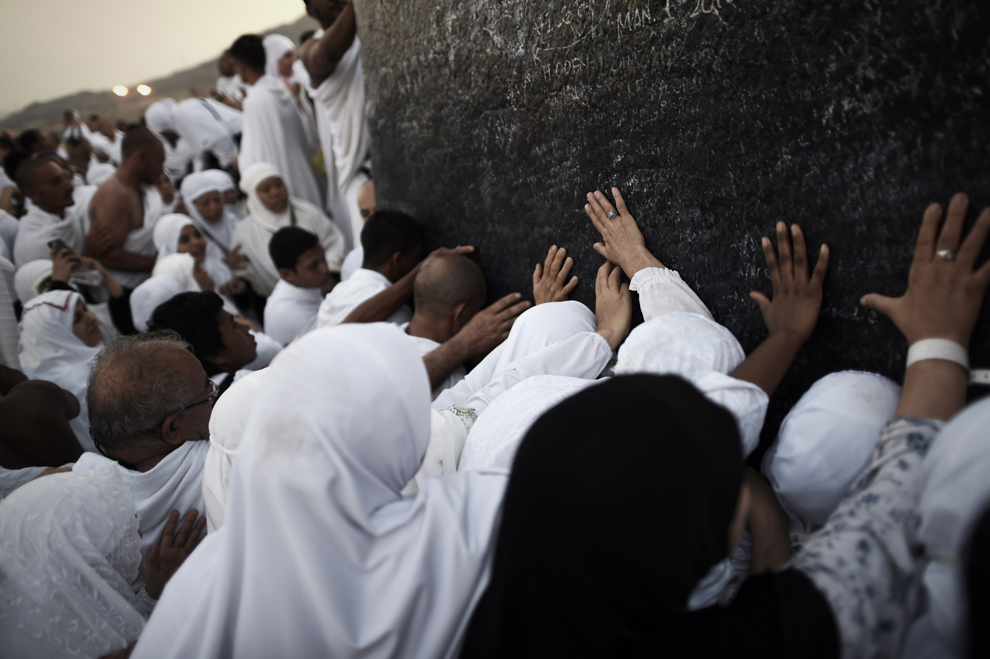 16
Muslim pilgrims gather on Mount Arafat near Mecca as they perform one of the Hajj rituals late on Oct. 3. (Mohammed Al-Shaikh/AFP/Getty Images) #

17
Orthodox man whips a Jewish man with a leather strap as a symbolic punishment for his sins during the traditional Malkot ceremony just hours before the start of Yom Kippur at a synagogue Oct. 3, in Beit Shemesh, Israel. (Lior Mizrahi/Getty Images) # 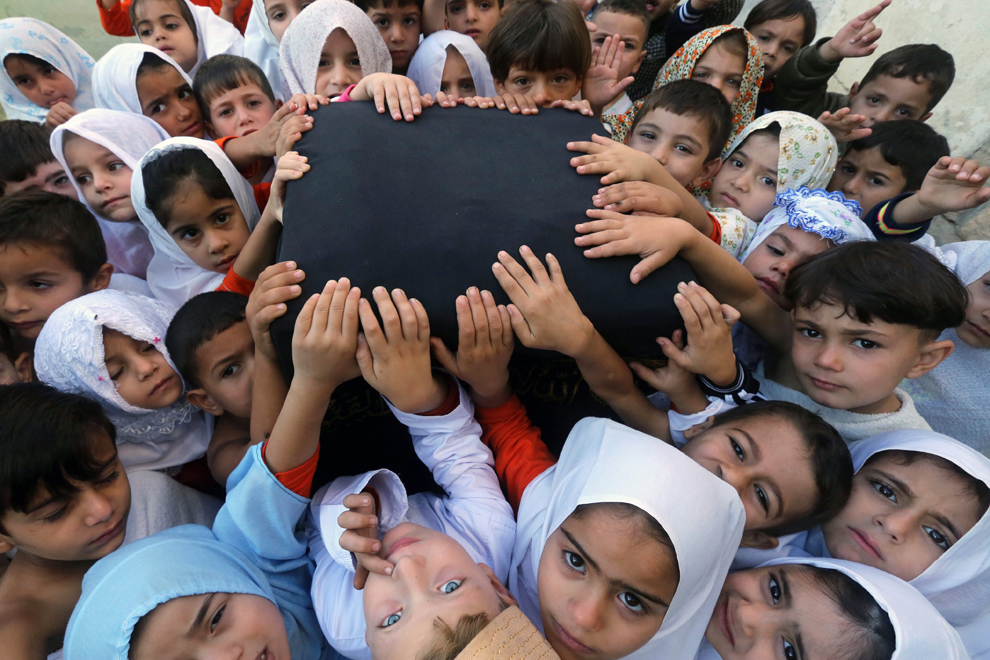 18
Palestinian children hold onto a pillar symbolizing the Kaaba as they learn about the Muslim idea of the Hajj or the 'pilgrimage' to Mecca, in a school in the West Bank city of Hebron, Oct. 1. (Bed Al Hashlamoun/EPA) # 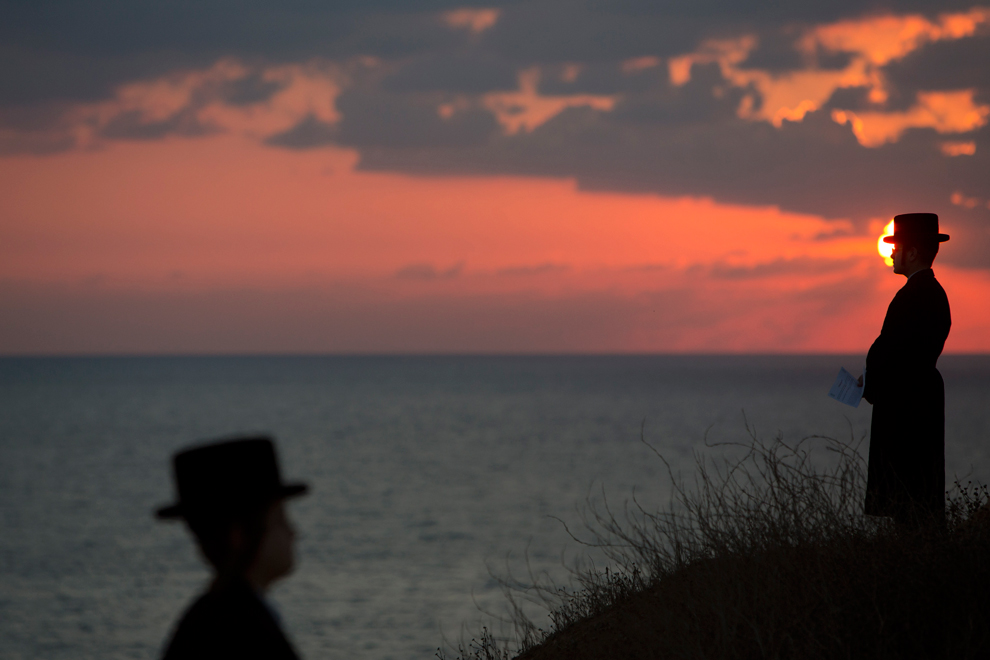 19
Ultra-Orthodox Jews gather on a hill overlooking the Mediterranean sea as they participate in a Tashlich ceremony in Herzeliya, Israel, Oct. 2. (Oded Balilty/Associated Press) # 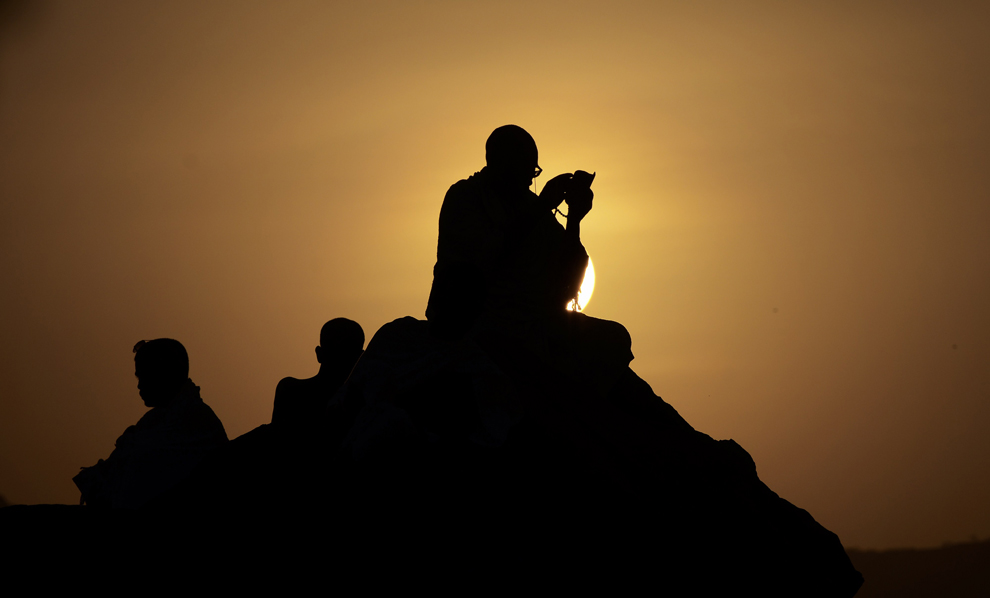 20
Muslim pilgrims gather on Mount Arafat, near Mecca, to take part in one of the Hajj rituals on Oct. 3. (Mohammed Al-Shaikh/AFP/Getty Images) #
< Back to front page
RECENT ENTRIES