The fighting continued in Iraq today near a main oil refinery, with government forces trying to stop a week-long attack from members of the Islamic State of Iraq and Syria and others. The Iraqi foreign minister has asked the United States for air strikes against the Sunni militants' positions but President Obama, in a meeting with leaders of Congress today, said he wanted for now to focus on training Iraq's security forces and providing equipment. Thousand of displaced civilians have been looking for shelter since the the attacks began. --Lloyd Young (25 photos total) 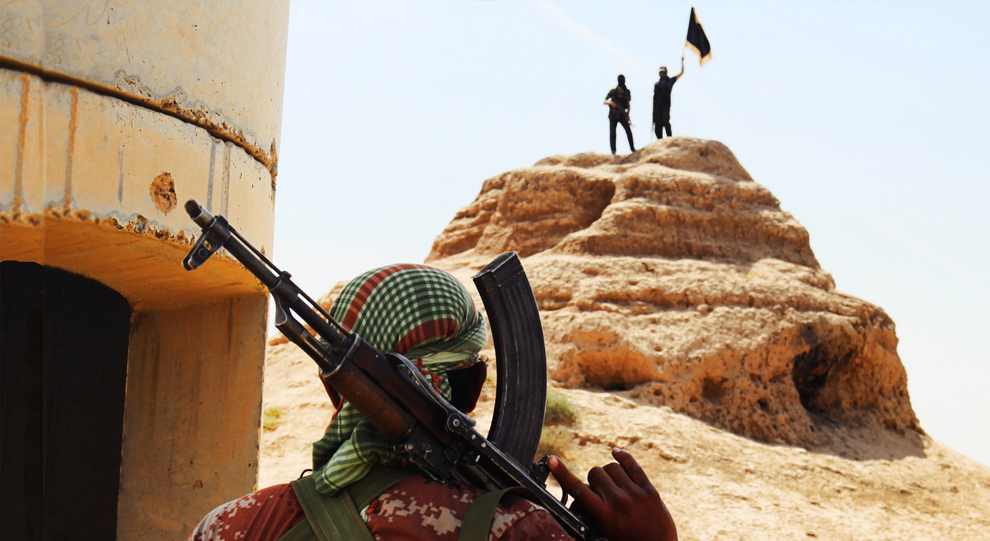 An image downloaded on June 11 from the jihadist website Welayat Salahuddin shows militants of the Islamic State of Iraq and the Levant (ISIL) waving the trademark Islamists flag after they allegedly seized an Iraqi army checkpoint in the northern Iraqi province of Salahuddin. Jihadists are pushing toward Baghdad on June 12 after capturing a town just hours to the north, as the US mulled air strikes in a bid to bolster Iraq's collapsing security forces. (AFP/Getty Images) 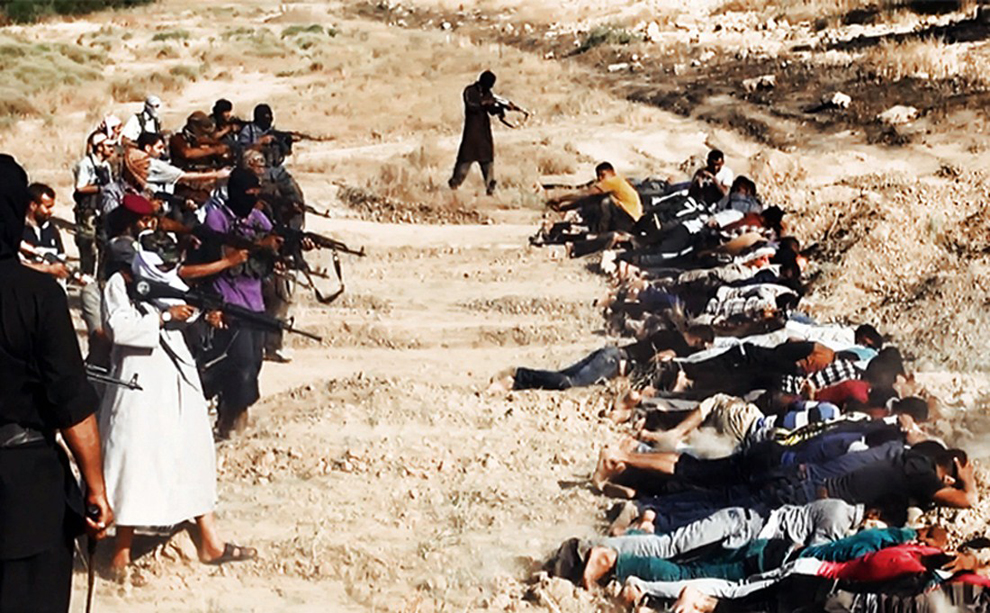 Click here to view it.
2
An image uploaded June 14 on the jihadist website Welayat Salahuddin allegedly shows militants of the Islamic State of Iraq and the Levant (ISIL) executing dozens of captured Iraqi security forces members at an unknown location in the Salaheddin province. A major offensive spearheaded by ISIL but also involving supporters of executed dictator Saddam Hussein has overrun all of one province and chunks of three others since it was launched on June 9. (AFP/Getty Images) # 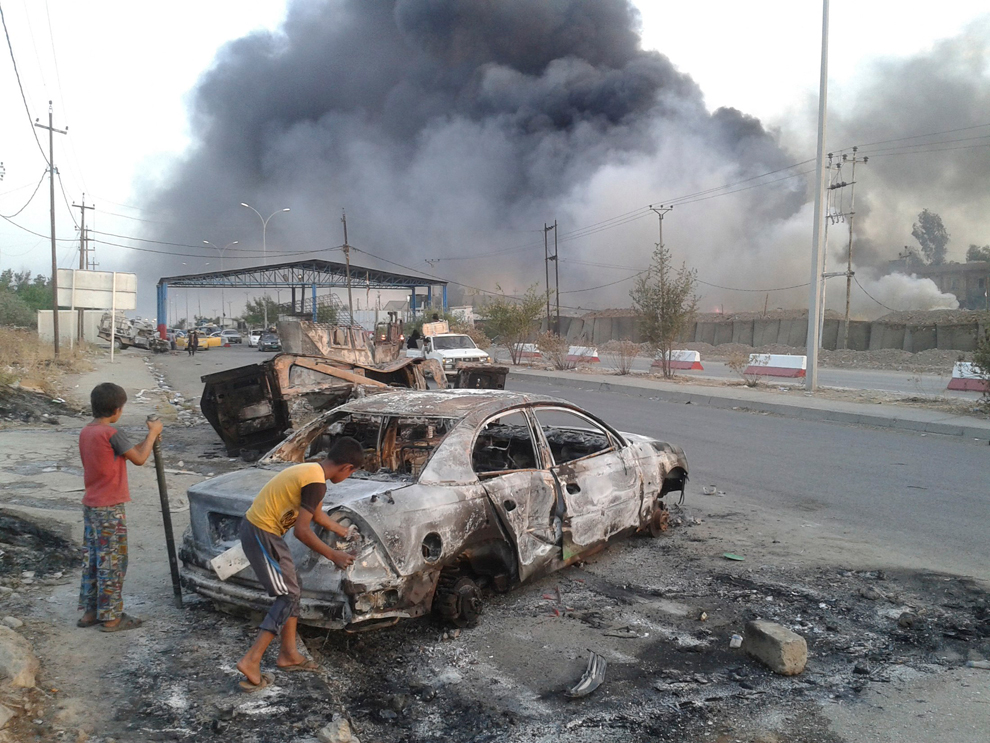 3
Civilian children stand next to a burnt vehicle during clashes between Iraqi security forces and al Qaeda-linked Islamic State in Iraq and the Levant (ISIL) in the northern Iraq city of Mosul on June 10. Radical Sunni Muslim insurgents seized control of most of Iraq's second largest city of Mosul early on Tuesday, overrunning a military base and freeing hundreds of prisoners in a spectacular strike against the Shi'ite-led Iraqi government. (Reuters) # 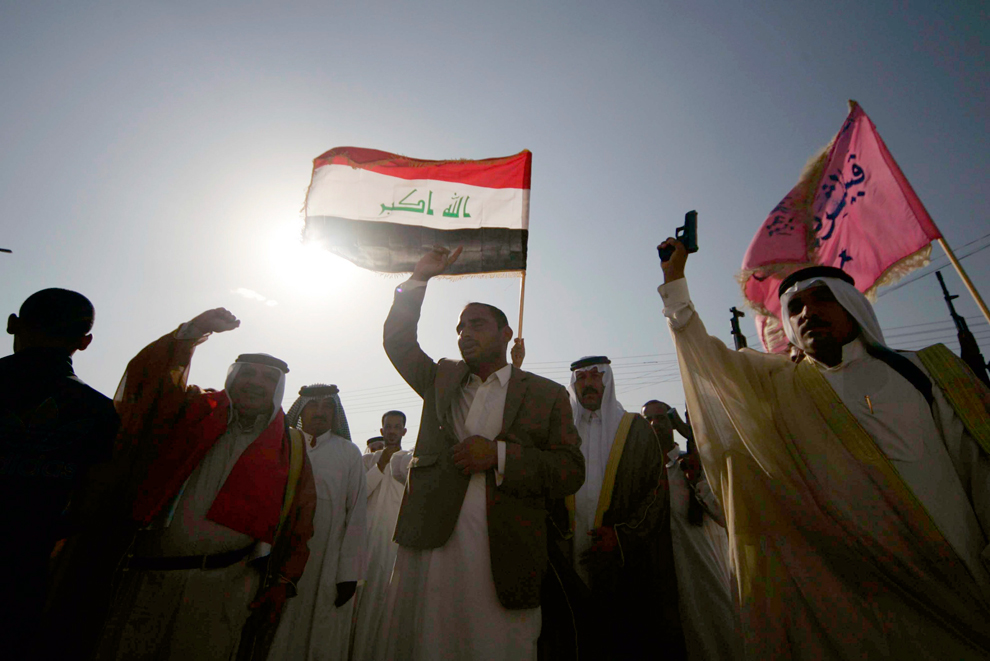 4
Tribal fighters from Ramadi wave the Iraqi flag and shout slogans in support of Iraqi security forces in Kerbala on June 15. The insurgent offensive that has threatened to dismember Iraq spread to the northwest of the country on Sunday, when Sunni militants launched a dawn raid on a town close to the Syrian border, clashing with police and government forces. (Mushtaq Muhammed/Reuters) # 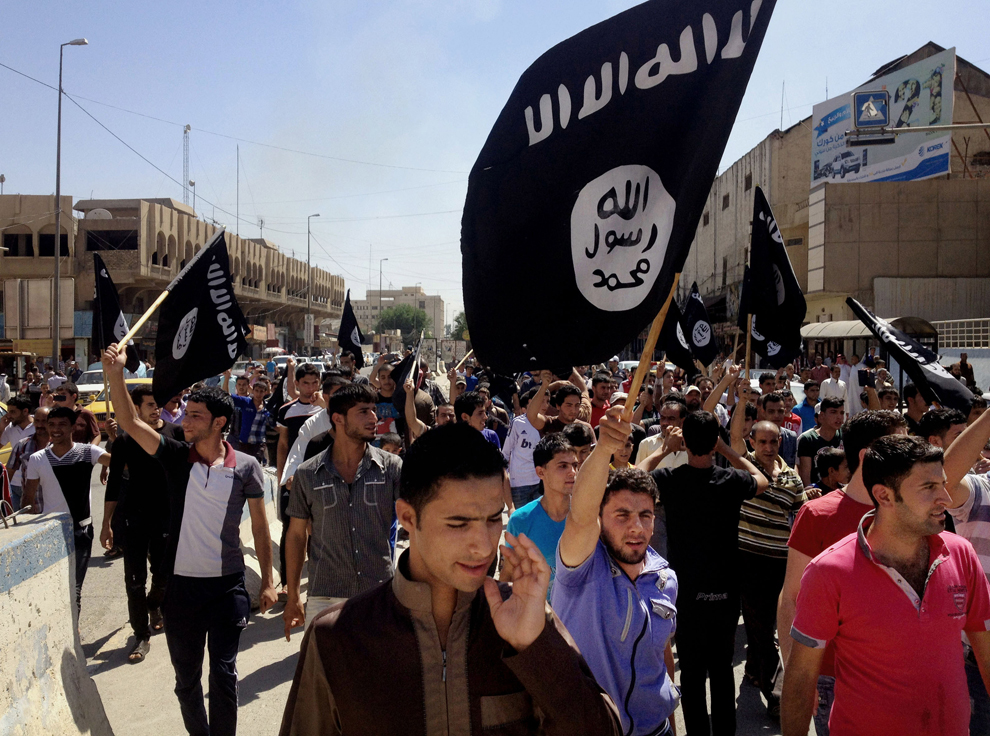 5
Demonstrators chant pro-al-Qaida-inspired Islamic State of Iraq and the Levant on June 16 as they carry al-Qaida flags in front of the provincial government headquarters in Mosul, 225 miles (360 kilometers) northwest of Baghdad, Iraq. The CIA and other spy agencies are scrambling to close intelligence gaps as they seek ways to support possible military or covert action against the leaders of the al-Qaida-inspired militant group that has seized parts of Iraq and threatens Baghdadís government. (Associated Press) # 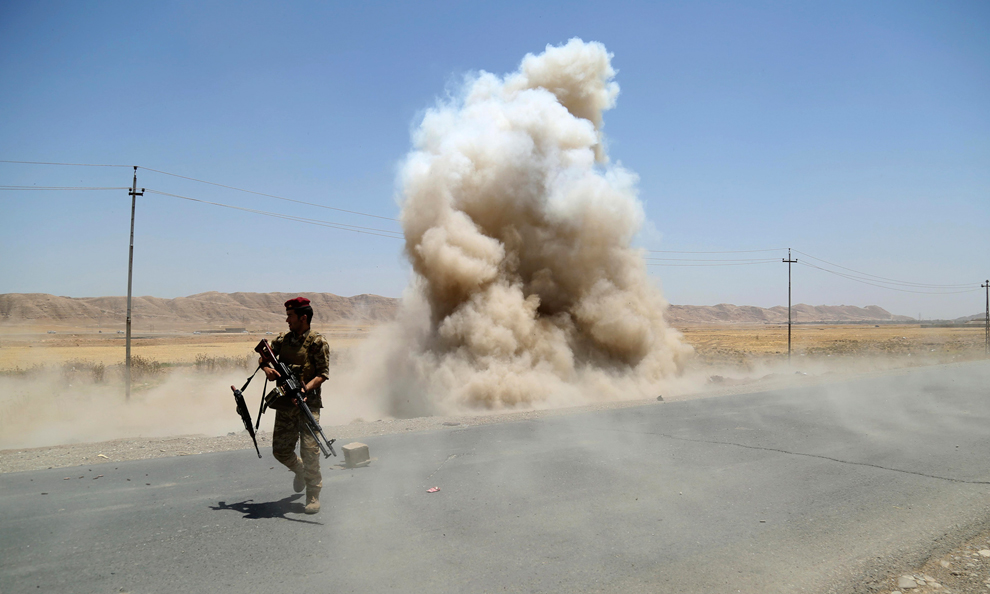 6
A member of the Kurdish security forces walks away from a controlled explosion in the town of Tuz Khurmato, north of the capital Baghdad on June 17. (Yahya Ahmad/Reuters) # 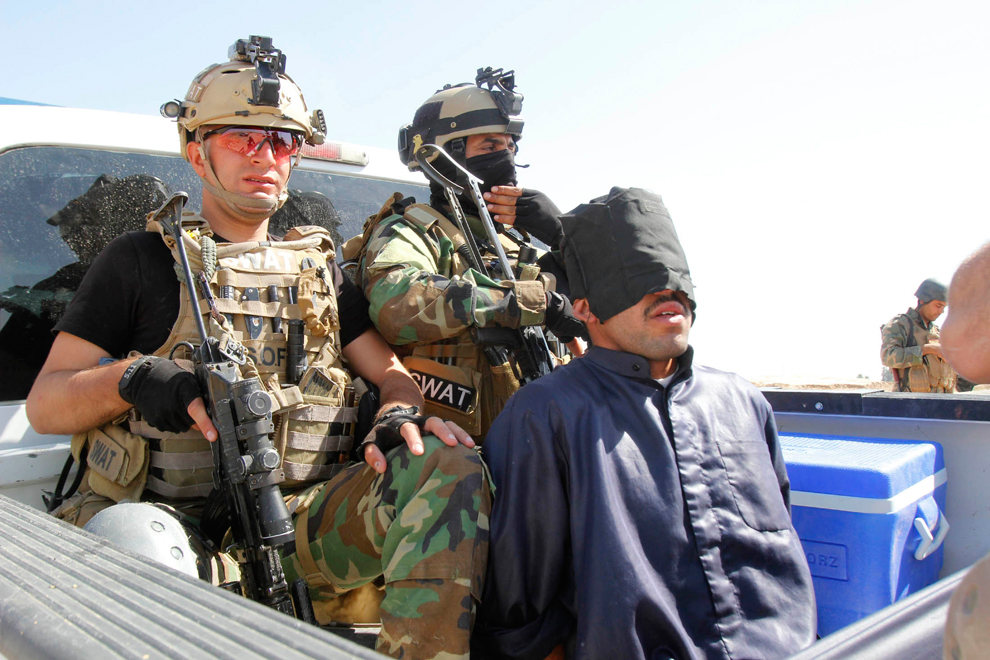 7
Personnel from the Kurdish security forces detain a man suspected of being a militant belonging to the al Qaeda-linked Islamic State in Iraq and the Levant (ISIL) in the outskirts of Kirkuk on June 16. Iraq's Shi'ite rulers defied Western calls on Tuesday to reach out to Sunnis to defuse the uprising in the north of the country, declaring a boycott of Iraq's main Sunni political bloc and accusing Sunni power Saudi Arabia of promoting "genocide". (Ako Rasheed/Reuters) # 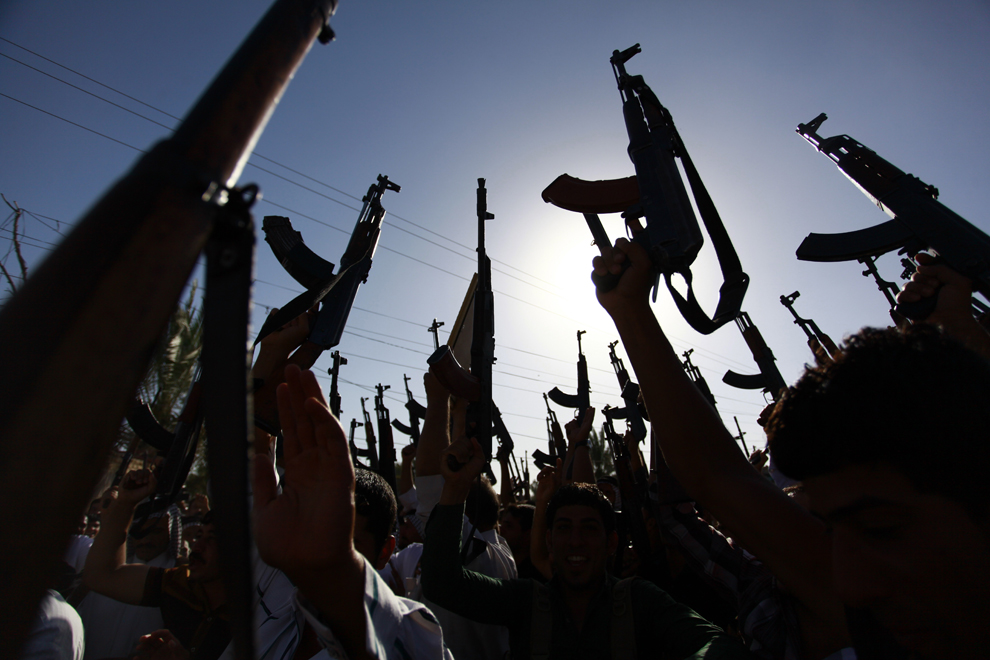 8
Iraqi Shiite tribesmen brandish their weapons as they gather to show their willingness to join Iraqi security forces in the fight against Jihadist militants who have taken over several northern Iraqi cities on June 17 in the southern Shiite Muslim shrine city of Najaf. Fighting erupted at the northern approaches to Baghdad Tuesday as Iraq accused Saudi Arabia of backing militants who have seized swathes of territory in an offensive the UN says threatens its very existence. (Haidar Hamdani/AFP/Getty Images) # 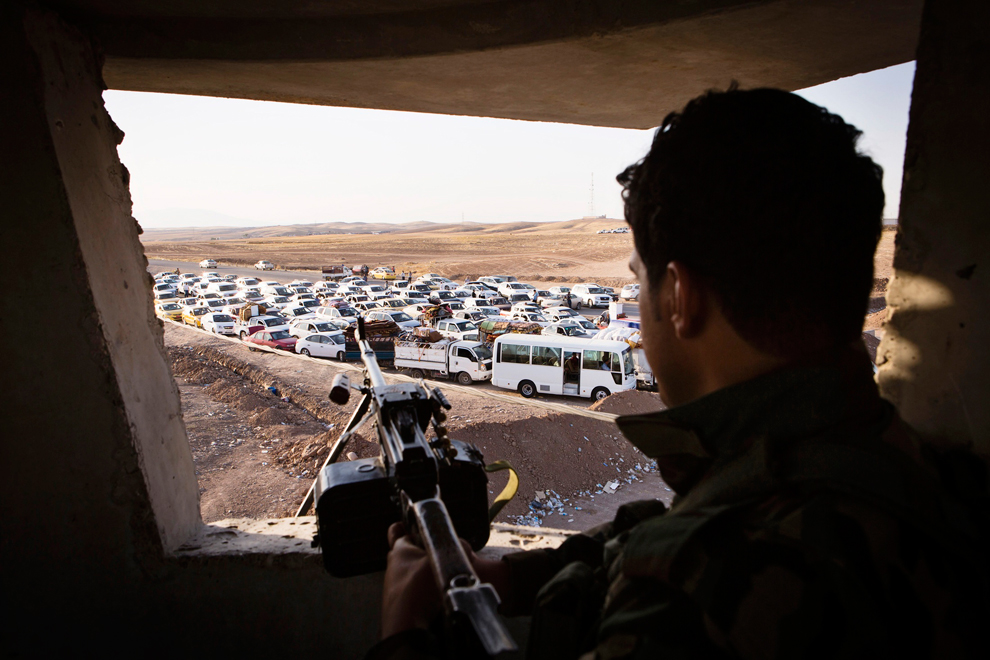 9
An Iraqi security forces member with his weapon takes position as people, who fled from the violence in Mosul, arrive in their vehicles at a camp for internally displaced people on the outskirts of Arbil in Iraq's Kurdistan region on June 14. The insurgent offensive that has threatened to dismember Iraq spread to the northwest of the country on Sunday, when Sunni militants launched a dawn raid on a town close to the Syrian border, clashing with police and government forces. Islamic State in Iraq and the Levant (ISIL) fighters and other Sunni Muslim armed groups have stormed several towns on the road to Baghdad after seizing the city of Mosul nearly a week ago. (Jacob Russell/Reuters) # 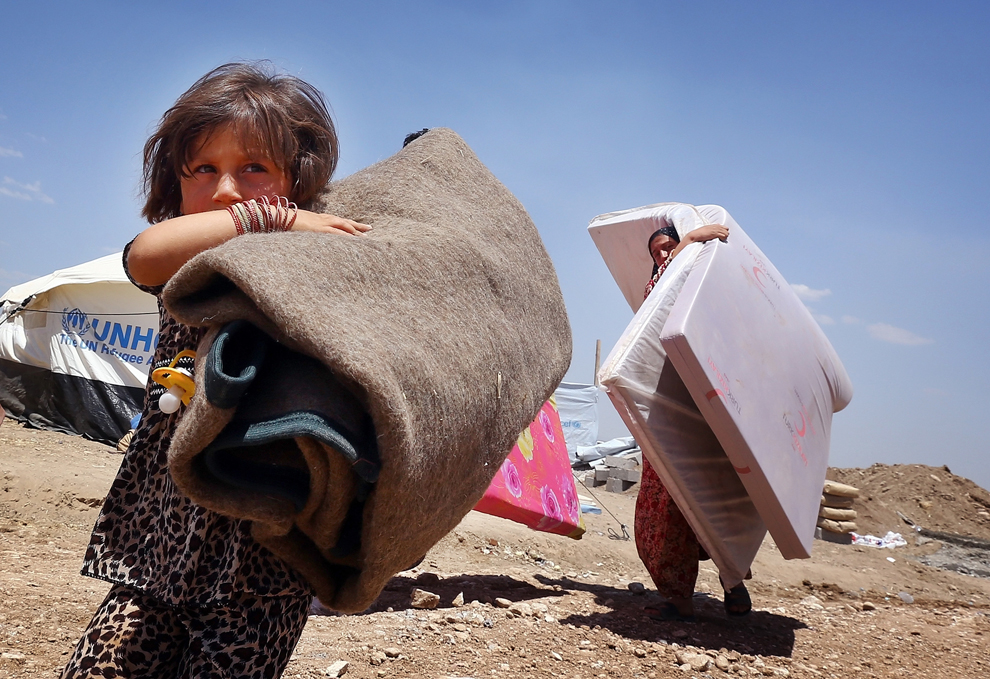 10
Iraqis who have fled fighting between security forces and al-Qaida inspired militants in their hometown of Tal Afar carry their belongings at Germawa camp for displaced Iraqis, in a hot dusty plain in the largely-autonomous Kurdish area of Dahuk, 260 miles (430 kilometers) northwest of Baghdad on June 17. (Associated Press) # 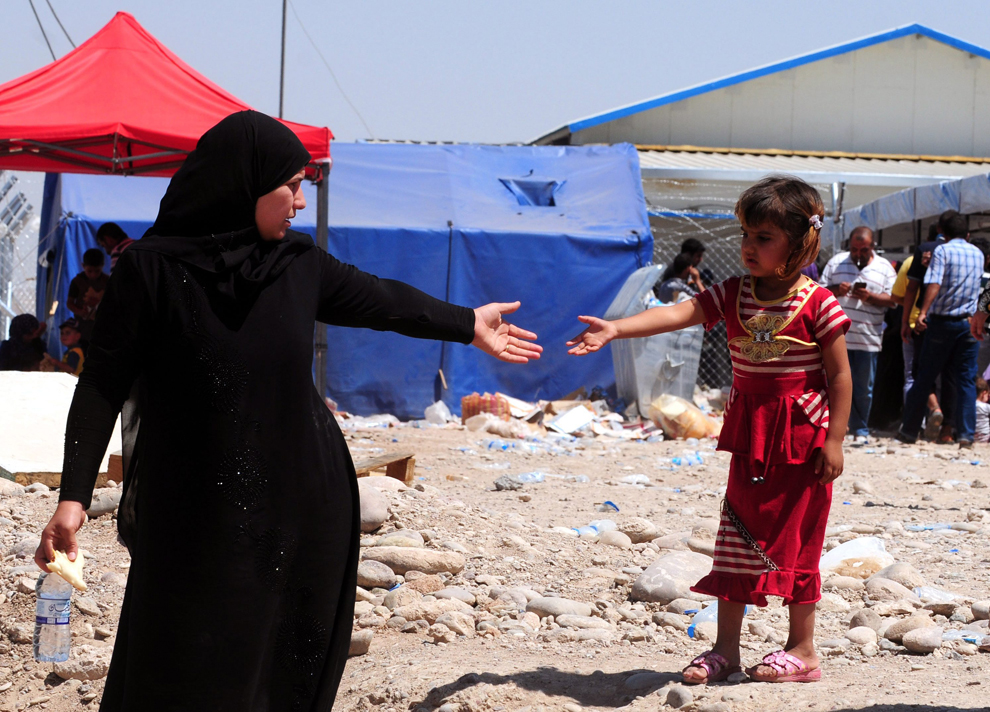 11
Iraqis who fled the violence in their home towns wait at a refugee camp near the city of Erbil, northern Iraq, on June 16. Iraqis who fled the violence in Tal Afar arrive at a checkpoint in Erbil, Kurdistan region, northern Iraq. Jihadist militants fighting the Iraqi government on 16 June claimed further advances in the north of the troubled country. The rapid advance of The Islamic State in Iraq and the Levant (ISIL) and other fighters from Iraq's Sunni minority who complain of discrimination at the hands of al-Maliki's Shiite-led government has caused international concern. (EPA) # 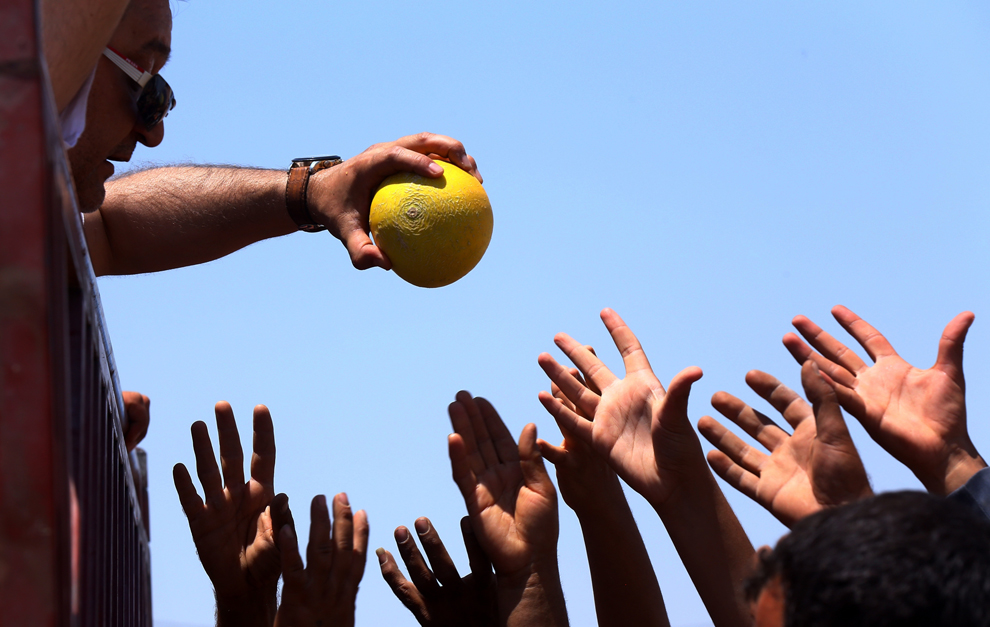 12
Iraqis who have fled the violence in their hometown of Mosul reach for a fruit during a food distribution at Khazir refugee camp outside of Irbil, 217 miles (350 kilometers) north of Baghdad, Iraq, on June 16. Sunni militants captured a strategic city along the highway to Syria on Monday, moving closer to their goal of linking areas under their control on both sides of the border. The al-Qaida breakaway group leading the push in Iraq also is fighting in the civil war next door in Syria where it controls territory abutting the Iraqi border. (Associated Press) # 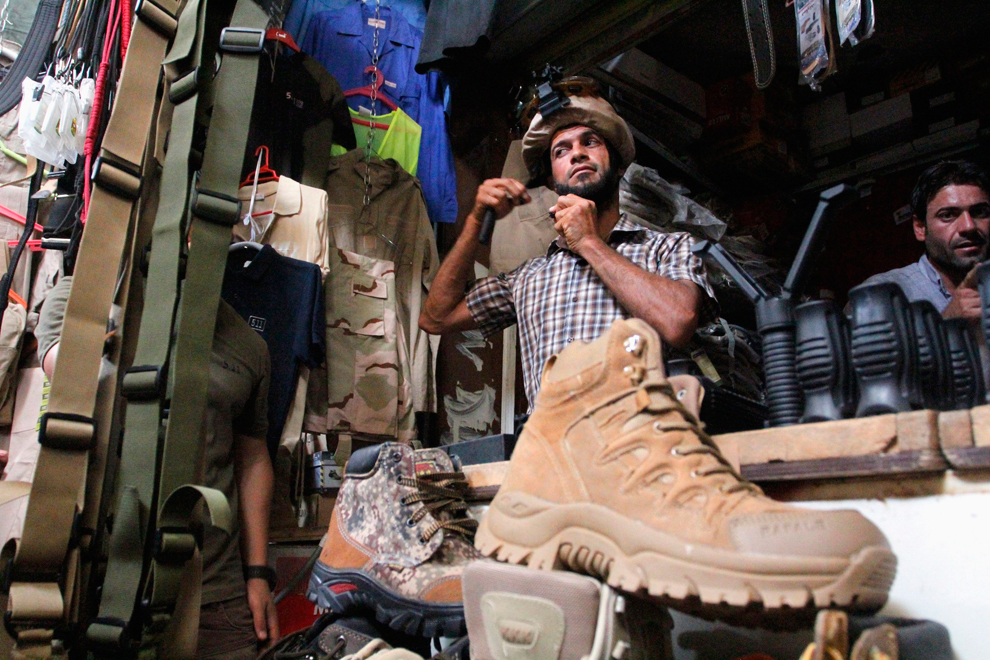 13
An Iraqi man buys military uniforms at a shop in Basra, southeast of Baghdad on June 16. The US is contemplating talks with its arch-enemy Iran to support the Iraqi government in its battle with Sunni Islamist insurgents who routed Baghdad's army and seized the north of the country in the past week. The stunning onslaught by militants from the Islamic State of Iraq and the Levant threatens to dismember Iraq and unleash all-out sectarian warfare across a crescent of the Middle East, with no regard for national borders that the fighters reject. (Essam Al-Sudani/Reuters) # 14
An Iraqi Shiite man cleans weapons as he gets ready to defend his Sadr City district in case of an attack by Sunni extremists on June 13 in Baghdad. Leading Shiite cleric Grand Ayatollah Ali al-Sistani called on Iraqis today to take up arms against the offensive spearheaded by the jihadist Islamic State of Iraq and the Levant (ISIL) marching on Baghdad, as thousands volunteered to bolster the the capital's defenses. (Ahmad al-Rubaye/AFP/Getty Images) # 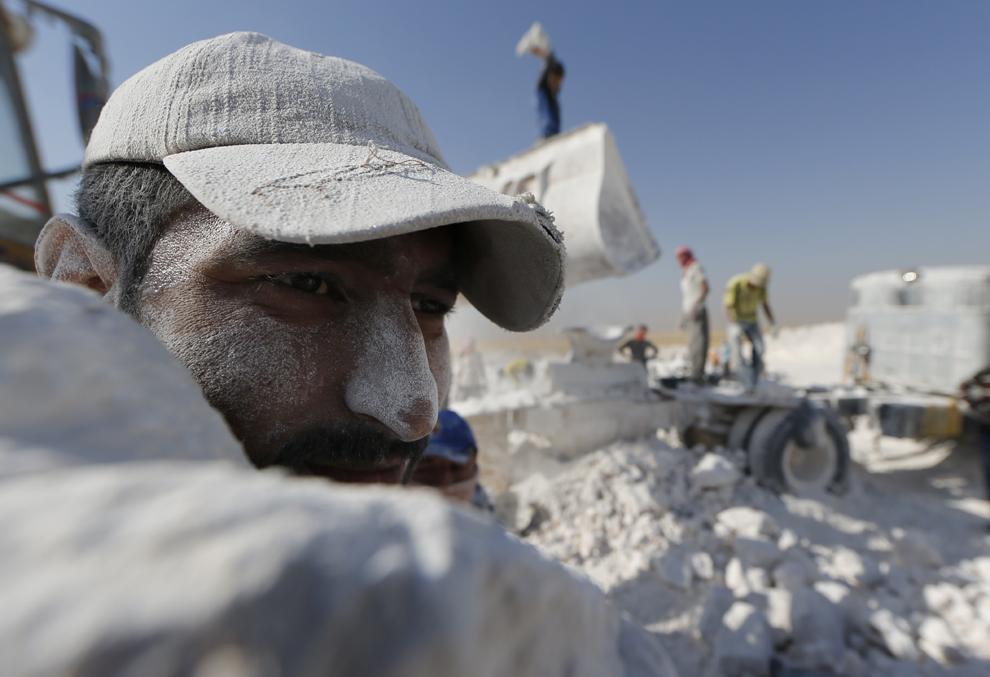 15
Iraqi laborers work at a white cement factory in Bartala in the Nineveh province, east of Mosul on June 17. Fighting erupted at the northern approaches to Baghdad today as Iraq accused Saudi Arabia of backing militants who have seized swathes of its territory in an offensive the UN says threatens its very existence. (Karim Sahib/AFP/Getty Images) # 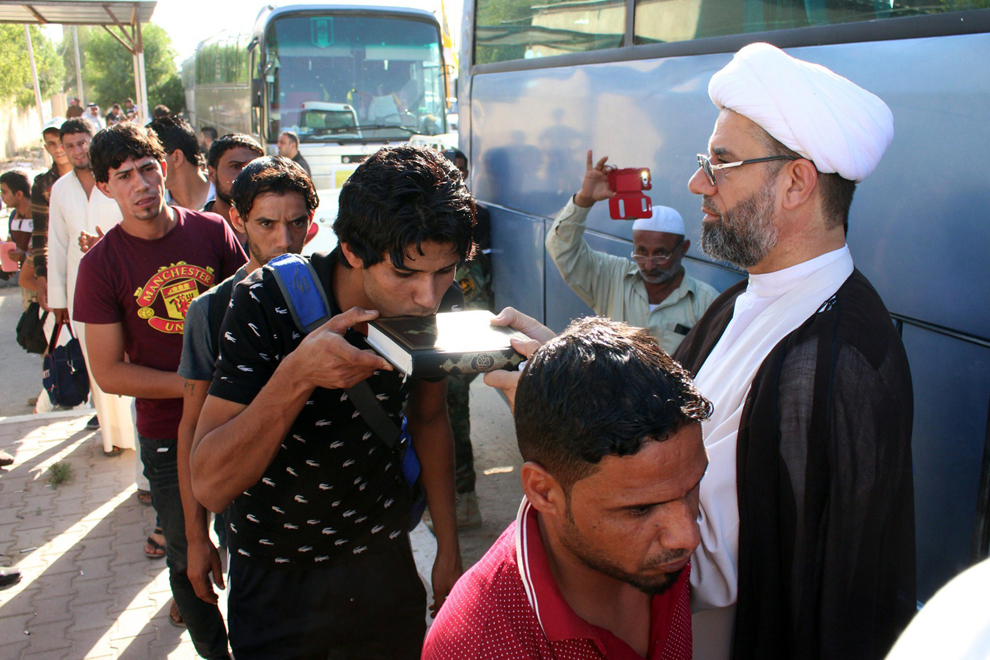 16
An Iraqi civilian, volunteering to fight a militant offensive, kisses a Koran book as he queues with comrades before boarding buses to reach Mosul on June 15 in the southern port city of Basra. Leading Shiite cleric Grand Ayatollah Ali al-Sistani urged Iraqis on June 13 to take up arms against Sunni militants marching on Baghdad, as thousands volunteered to bolster the capital's defenses. (AFP/Getty Images) # 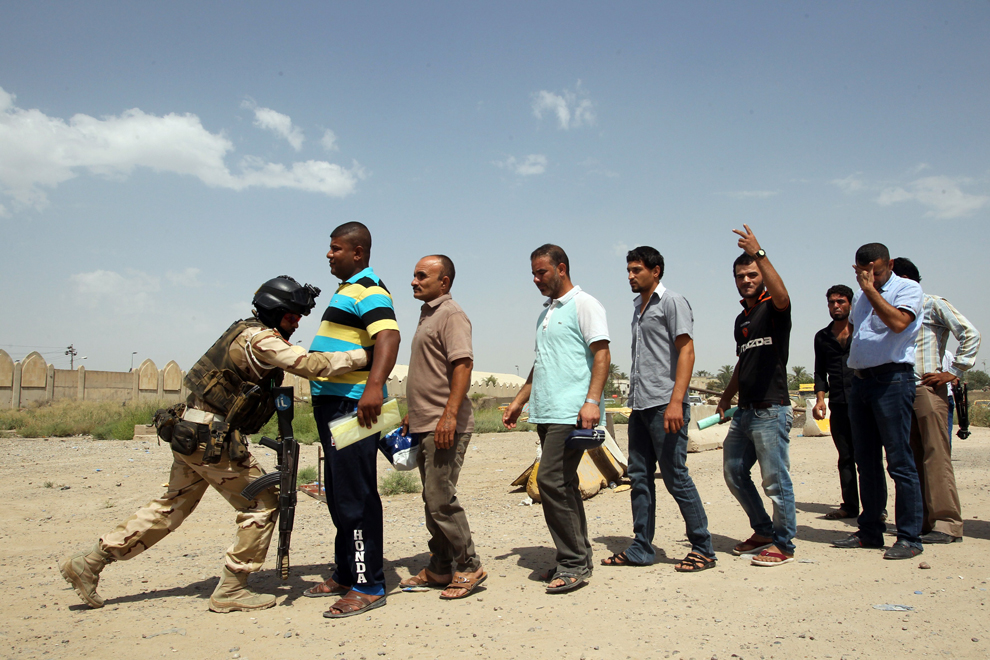 17
An Iraqi soldier pats down men as they arrive to volunteer to join the fight against a major offensive by jihadists in northern Iraq on June 13, 2014, at recruiting center in the capital Baghdad. Iraqi forces clashed with militants advancing on the city of Baquba, just 60 kilometres (40 miles) north of Baghdad, as an offensive spearheaded by jihadists drew closer to the capital. (Ali al-Saadi/AFP/Getty Images) # 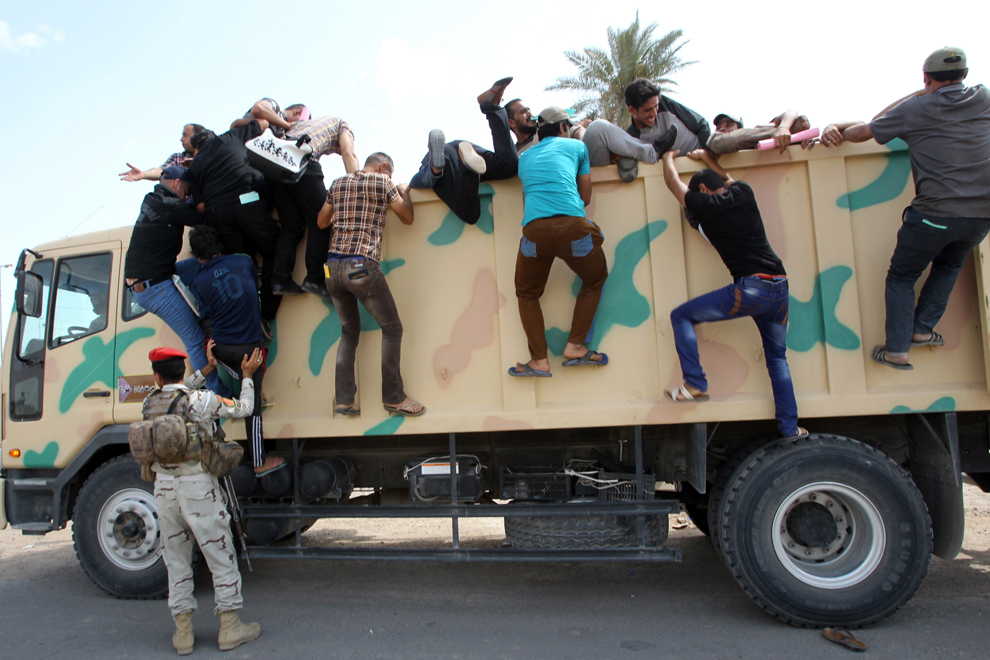 18
Iraqi men who volunteered to join the fight against a major offensive by jihadists in northern Iraq climb on an army truck outside a recruiting center in the capital Baghdad on June 13. Iraqi forces clashed with militants advancing on the city of Baquba, just 60 kilometres (40 miles) north of Baghdad, as an offensive spearheaded by jihadists drew closer to the capital. (Ali al-Saadi/AFP/Getty Images) # 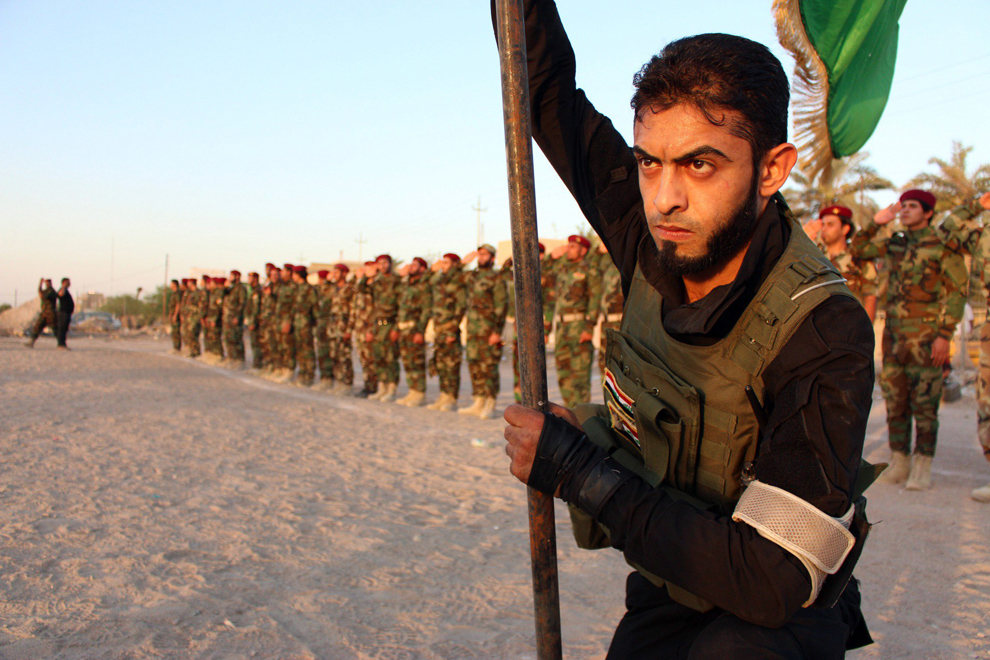 19
Members of the Shiite Muslim Mehdi Army militia, take part in training in the southern Iraqi city of Basra on June 17. Iraqi Shiite volunteers, who had been fighting in neighboring Syria, have been heading home to battle an offensive that has brought militants to near Baghdad, the Syrian Observatory for Human Rights said. (AFP/Getty Images) # 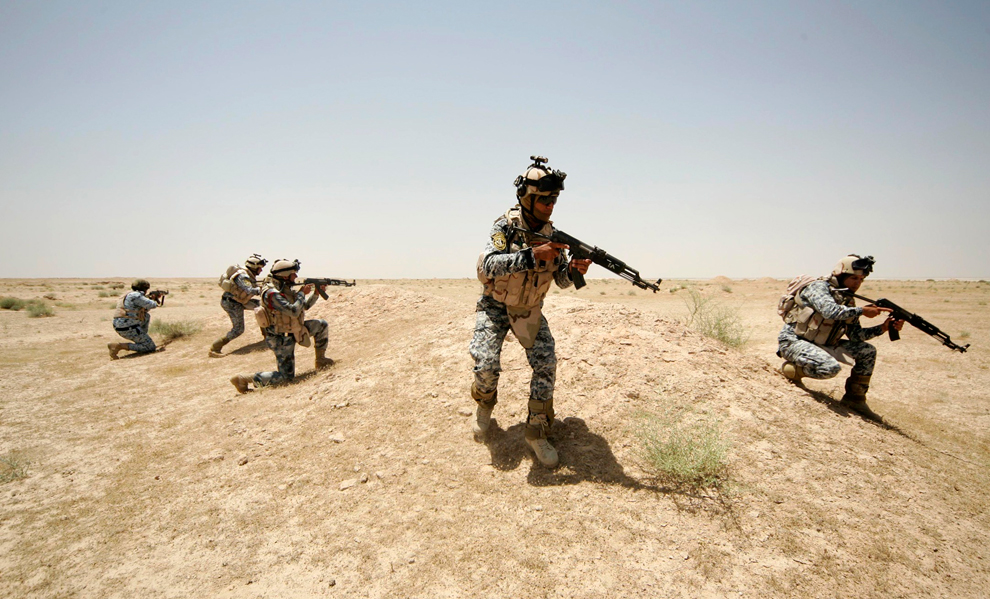 20
Members of the Iraqi security forces patrol an area near the borders between Karbala Province and Anbar Province on June 16. The US said it could launch air strikes and act jointly with its arch-enemy Iran to support the Iraqi government, after a rampage by Sunni Islamist insurgents across Iraq that has scrambled alliances in the Middle East. (Mushtaq Muhammed/Reuters) # 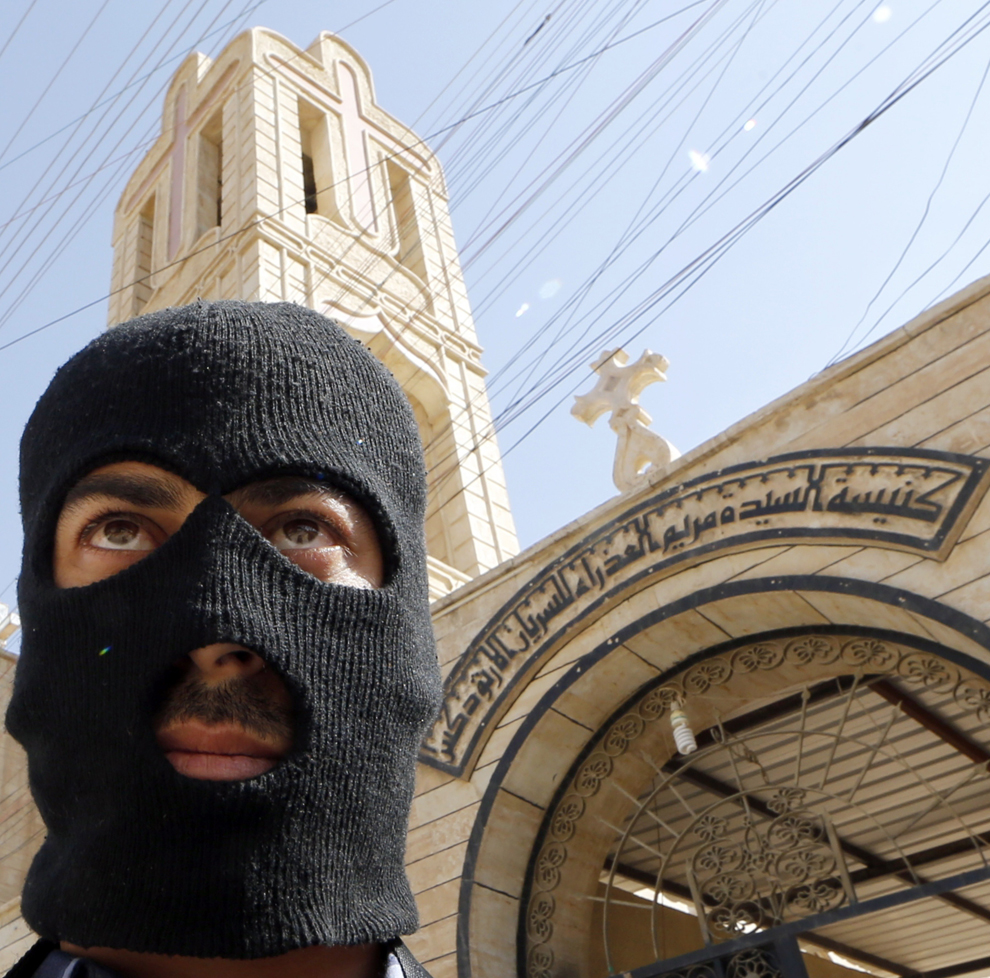 21
An Iraqi security officer, stands guard outside the Church of the Virgin Mary in the northern town of Bartala on June 15 east of the northern city of Mosul. Iraqi security stayed in the town to protect the local churches and community. The exiled governor of Mosul, Iraq's second city which was seized by Islamist fighters last week, has called for US and Turkish air strikes against the militants. (Karim Sahib/AFP/Getty Images) # 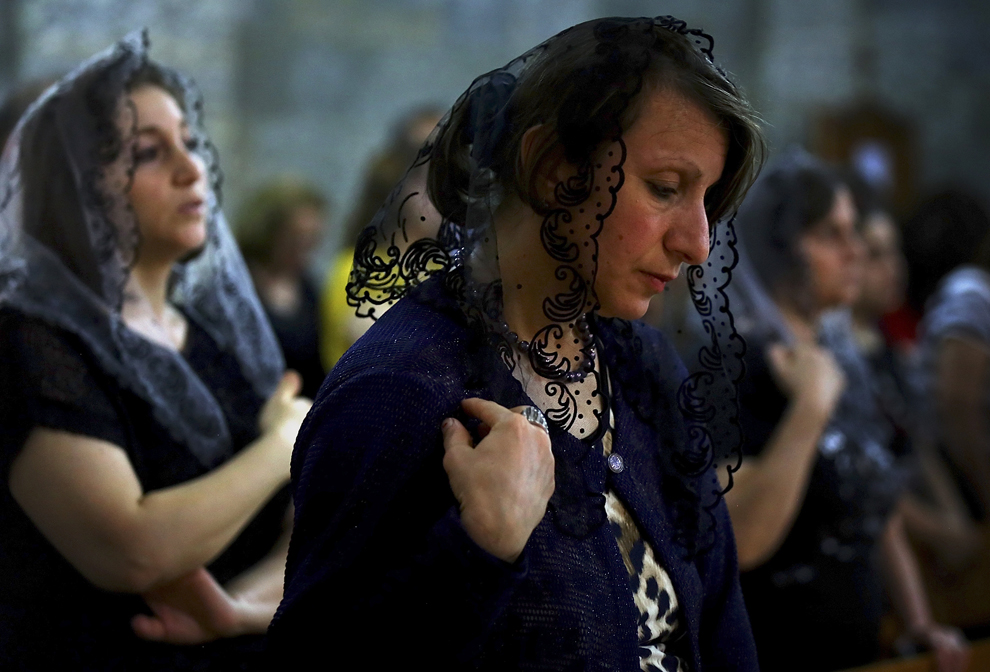 22
Iraqis attend Mass on June 15 at the Chaldean Church of the Virgin Mary of the Harvest, in Alqosh, set in the seventh century Saint Hormoz monastery built into a hill overlooking Alqosh, a village of some 6,000 inhabitants about 50 kilometers (31 miles) north of Mosul, northern Iraq. Dozens of Christian families that fled to this ancient Iraqi village have taken a much-traversed route -- many from their minority community have escaped to Alqosh before, in fear for their lives. This time, few say they want to go back to their homes, seeking safety under the Kurdish forces known as the Peshmerga. (Associated Press) # 23
A Kurdish Peshmerga fighter wounded in clashes with jihadists from the Islamic State of Iraq and the Levant (ISIL) in Kirkuk is watched by a family member as he lies on a bed in the emergency ward of a hospital in Arbil, the capital of the autonomous Kurdish region of northern Iraq, on June 18. The rapid shift to Kurdish control in Iraq's ethnically mixed oil city of Kirkuk is a step toward a long-held dream for Kurds but has sparked fears among other groups. (Safin Hamed/AFP/Getty Images) # 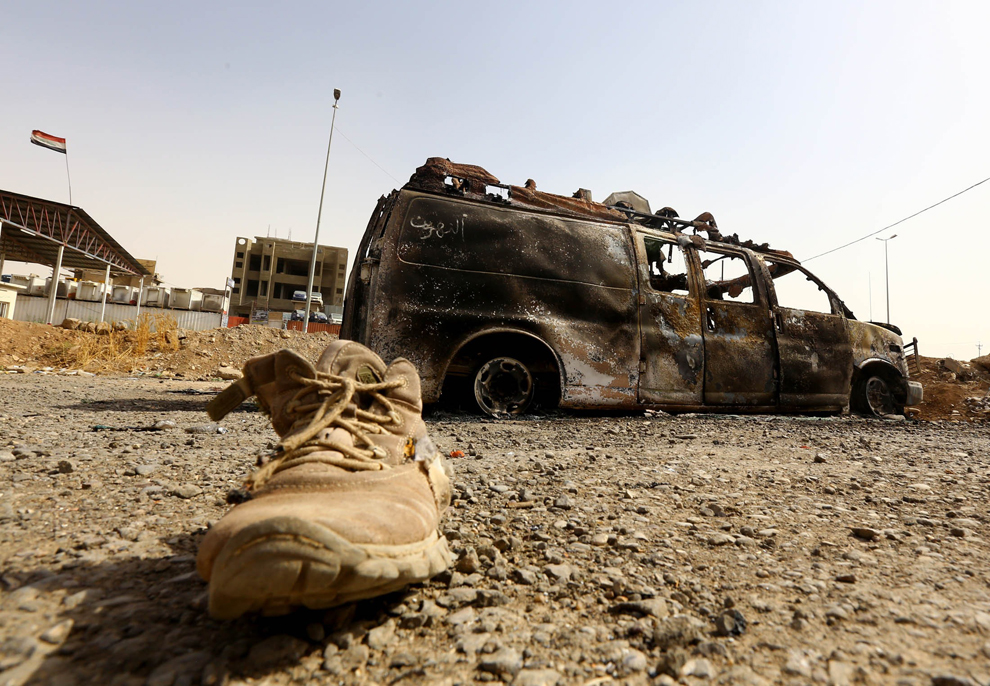 24
A burnt vehicle belonging to Iraqi security forces is pictured at a checkpoint in east Mosul, one day after radical Sunni Muslim insurgents seized control of the city on June 11. Sunni insurgents from an al Qaeda splinter group extended their control from the northern city of Mosul on Wednesday to an area further south that includes Iraq's biggest oil refinery in a devastating show of strength against the Shi'ite-led government. (Reuters) # 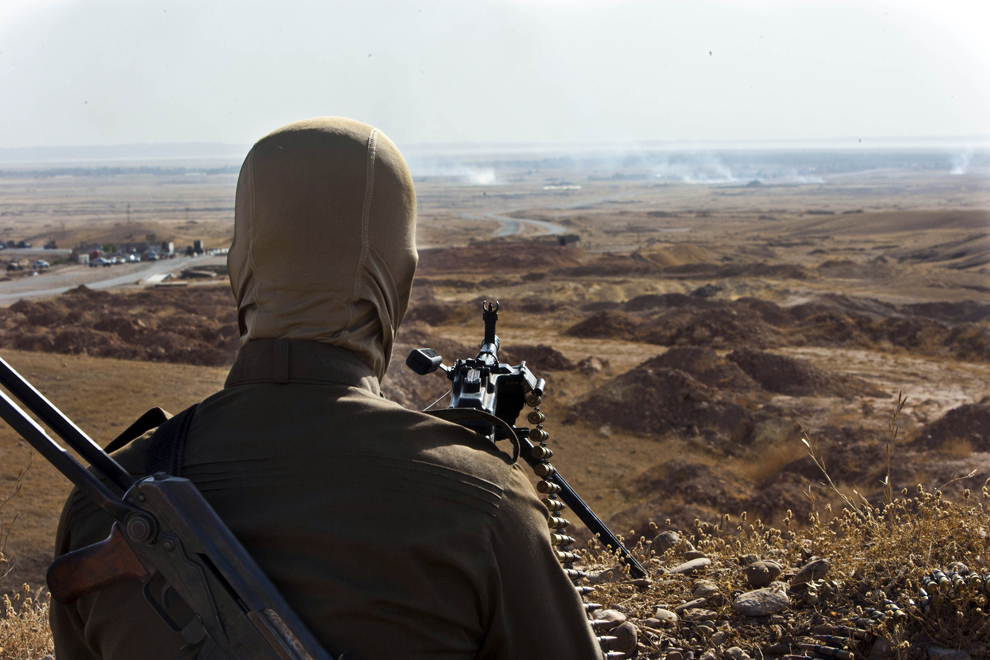