It comes around every year whether you celebrate or not. We even recognize the day for notable people, places, and events from the past. So, whenever yours is or whose you mark -- Happy Birthday! --Lloyd Young (21 photos total) 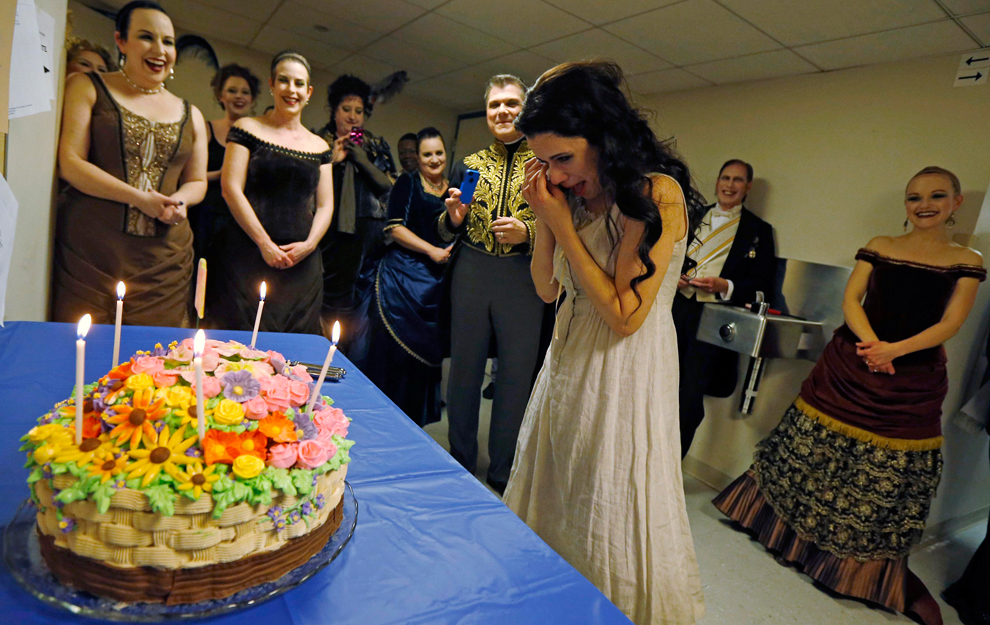 Performer Ana Maria Martinez wipes away tears as she is presented with a birthday cake during a break of the performance of "Rusalka" at the Lyric Opera in Chicago, March 10. The plot summary of US opera in recent years has unfolded like the last act of a Verdi tragedy: New York City Opera, dead; Opera Boston, dead; San Diego Opera, on its final aria. The Chicago opera scene, however, is all up tempo.The nation's third most populous city has not only preserved its devotion to opera, it has expanded it, despite hard times for the art form elsewhere. Opera experts credit creative programming, solid philanthropic help and a loyal, enthusiastic audience. (Jim Young/Reuters) 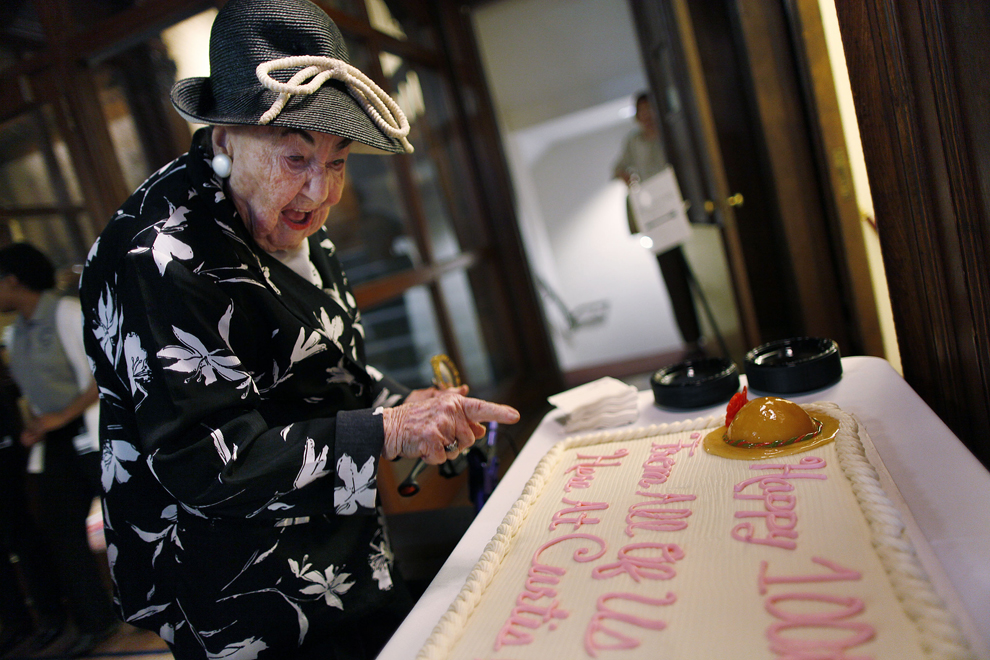 2
Eleanor Sokoloff, an American Pianist, reads her birthday cake which says " Happy 100th From All Of Us Here At Curtis!!" The piano teacher at Curtis Institute of Music will soon turn 100 and attended a tea in her honor on May 7. (Michael S. Wirtz/The Philadelphia Inquirer via Associated Press) # 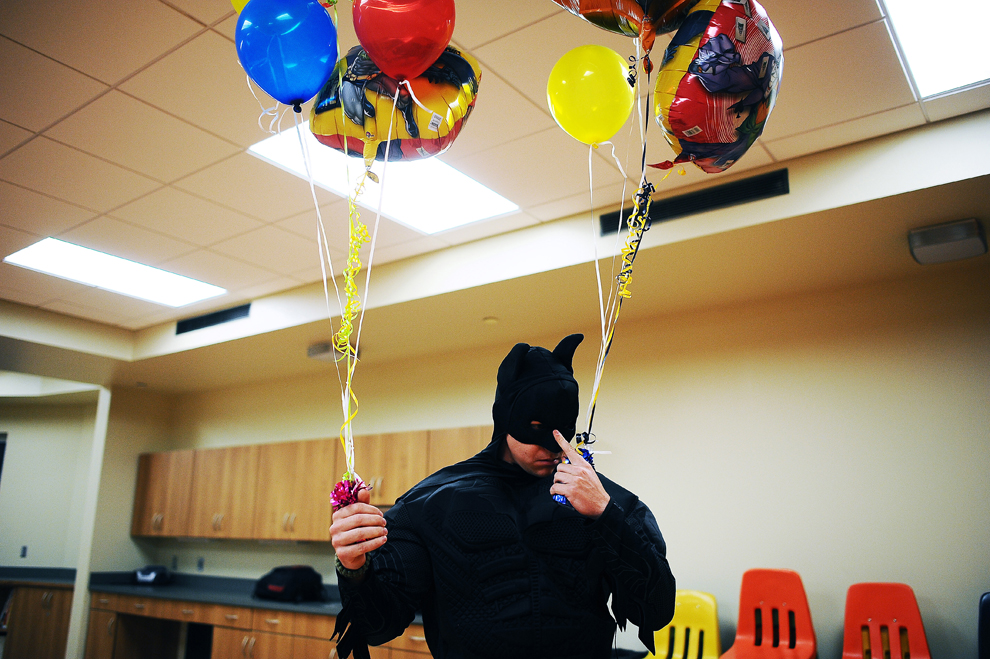 3
Navy Corpsman, Christopher Duke, who is on leave from Afghanistan, adjusts his Batman mask and holds onto birthday balloons while waiting to surprise his kids, Brayden Duke, 3, and Brilee Duke, 1, on June 1 in the Delbridge Museum of Natural History at the Great Plains Zoo in Sioux Falls, S.D. "I'd give anything for these two," Duke said about his kids, "I love them more than anything." Duke was dressed as Batman as a birthday surprise for his son's upcoming birthday. (Joe Ahlquist/Argus Leader via Associated Press) # 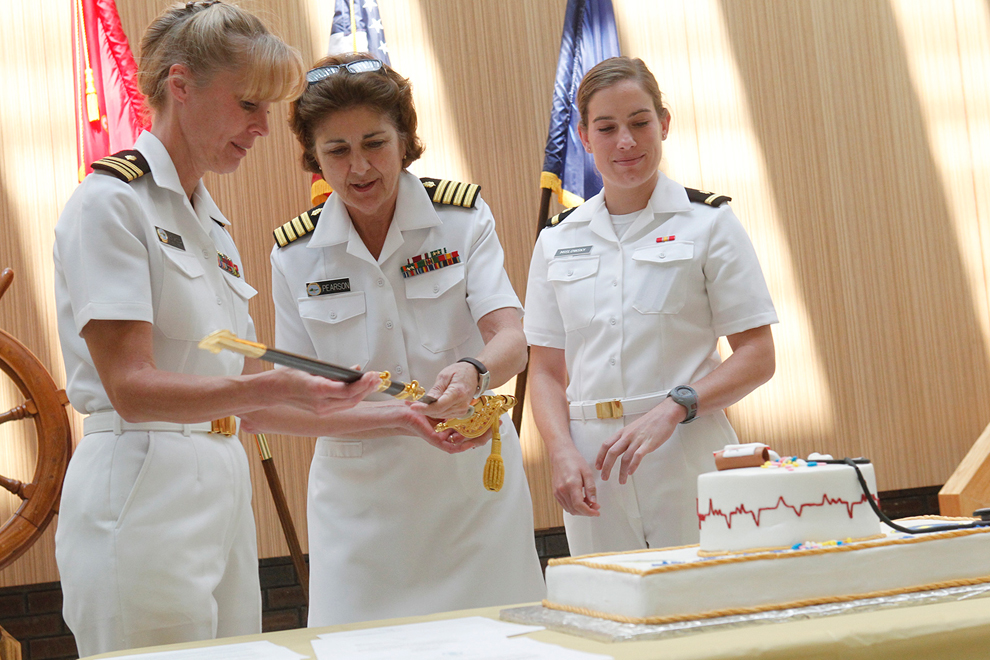 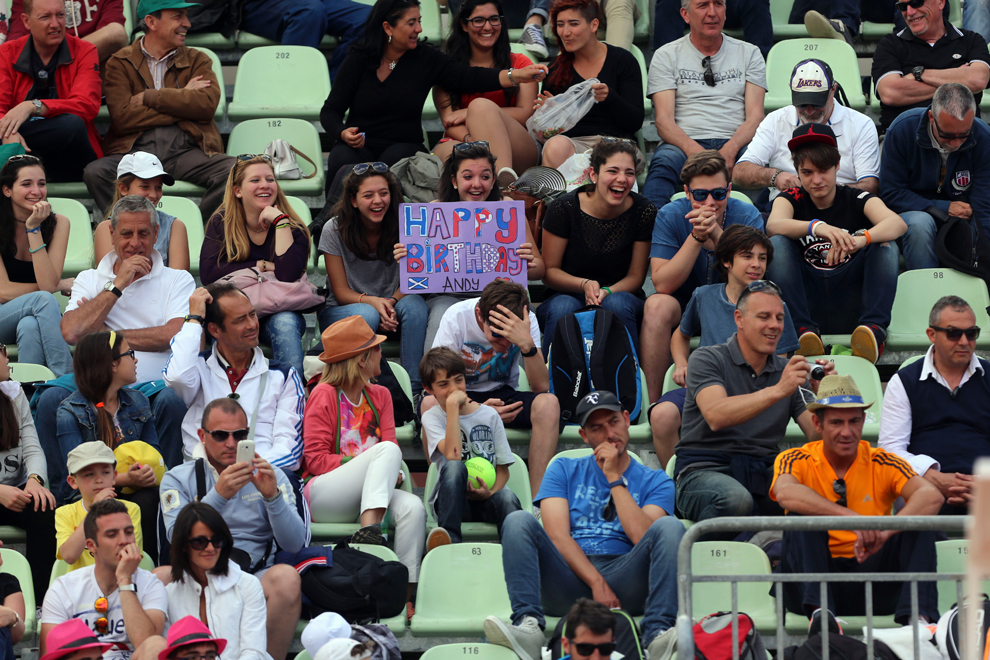 5
Fans show Britain's Andy Murray a poster wishing him happy birthday during his match against Austria's Jurgen Melzer at the Italian open tennis tournament in Rome, on May 15. (Gregorio Borgia/Associated Press) # 6
Seattle Mariners' Robinson Cano, right, poses for a photo with birthday boy Janio Mollieri, 8, of Lynnwood, Wash., before a baseball game against the Houston Astros on May 23 in Seattle. (Elaine Thompson/Associated Press) # 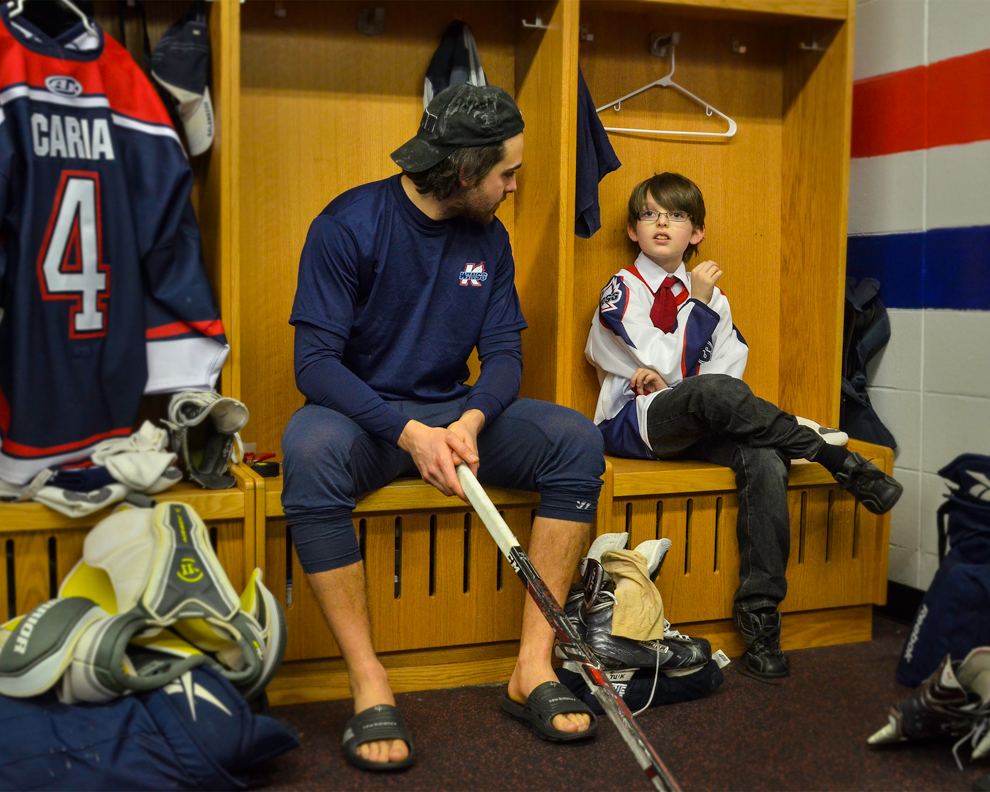 7
Colin, no last name given, 11, talks with Kalamazoo Wings center Matt Caria on March 23 in Kalamazoo, Mich. Colin, who said he didn't want an 11th birthday party because he had no friends, was surprised with a one-day contract letting him join the Wings for its home game Sunday against the Fort Wayne Komets. (John Gilroy/Kalamazoo Wings via Associated Press) # 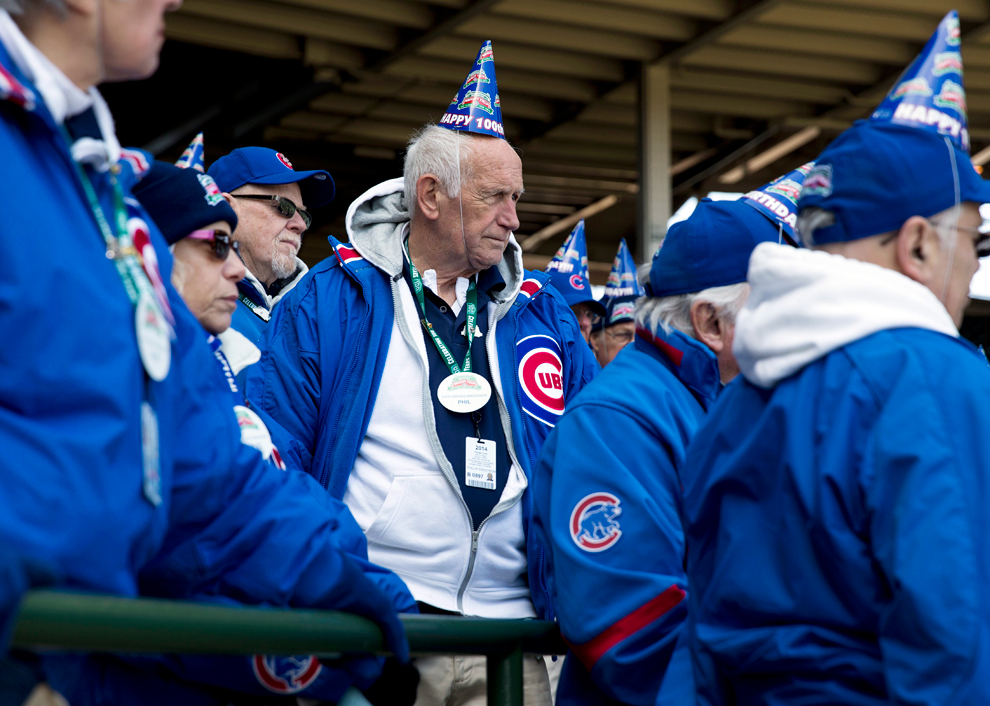 8
Stadium employees including Phillip Engstrom, center, wear birthday hats celebrating the 100th anniversary of the first baseball game at the park, before a game between the Arizona Diamondbacks and Chicago Cubs on April 23 in Chicago. (Andrew A. Nelles/Associated Press) # 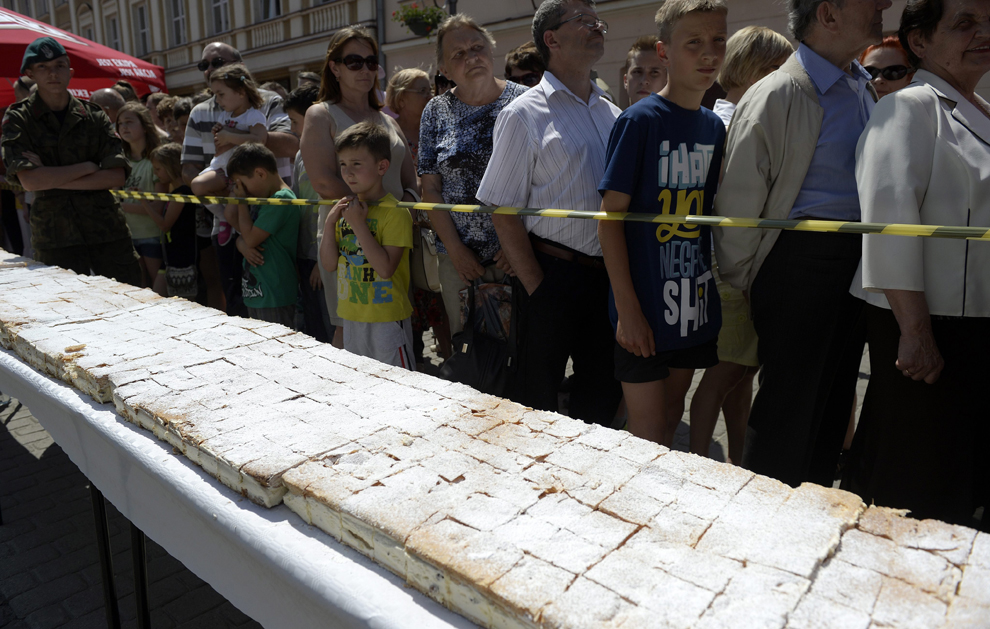 9
People line up for a slice of the 94-metres-long cake prepared by local pastry chefs to celebrate the 94th birthday of Pope Saint John Paul II in Rzeszow, Poland, on May 25. The cake made to celebrate the birthday of Karol Wojtyla on 18 May 1920 was distributed to people in 12,000 portions. (Darek Delmanowicz/EPA) # 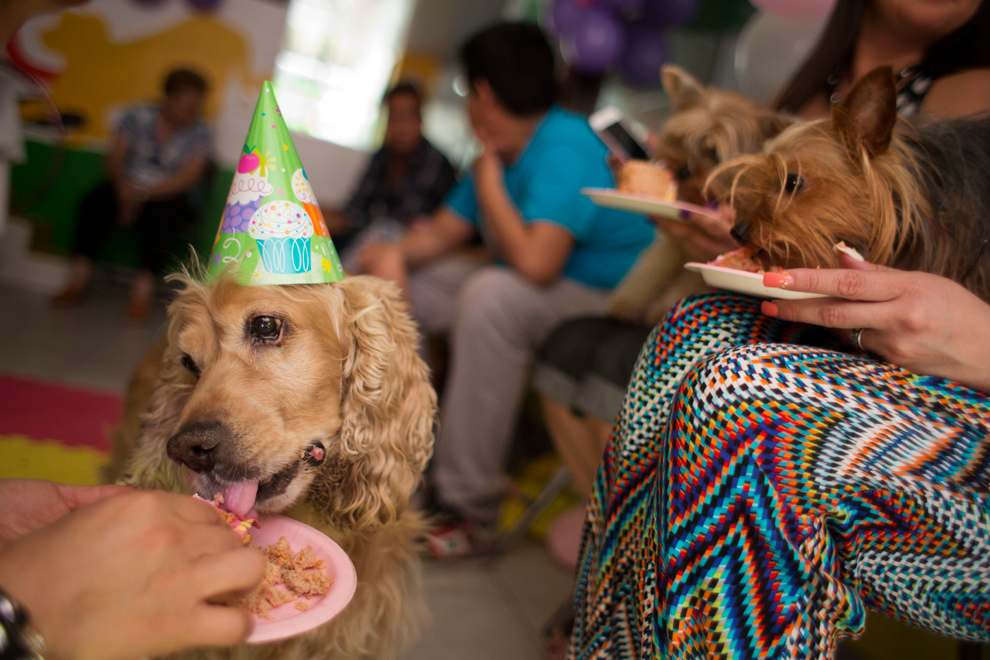 10
Twelve-year-old Honey, left, and other guests eat dog friendly birthday cake at a party for one-year-old dachshund Camila in Mexico City, Mexico, on April 6. Camila celebrated her first birthday in a blue and white striped dress with tulle appliques, playing with her guests in a room decorated with pink balloons, lilacs, and hello kitty posters. (Rebecca Blackwell/Associated Press) # 11
Lilian Tintori, wife of jailed opposition leader Leopoldo Lopez, and her children, Manuela and Leopoldo Santiago, blow a candle of a birthday cake for her husband at Chacao district in Caracas on April 29. Venezuelan protest leader Leopoldo Lopez is being held at a military jail of Ramo Verde since last February 18 when he was arrested. (Jorge Silva/Reuters) # 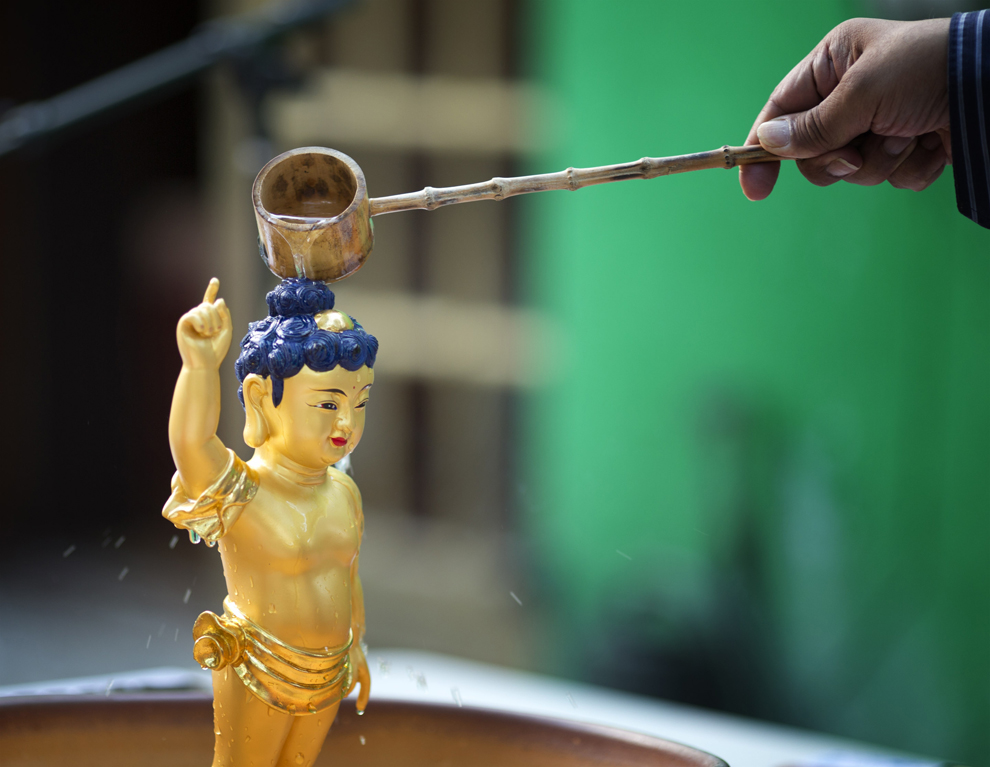 12
A person washes a baby Buddha as Members of Miami's Zen Village celebrated Buddha's birthday on May 17. The "bathing Buddha" ritual uses fragrant water to baby Buddha to wash anger, greed and ignorance. His birthday, known as Vesak Day, is celebrated on various dates in the spring throughout the world, and each Buddhist culture has its own traditions for the day. (J Pat Carter/Associated Press) # 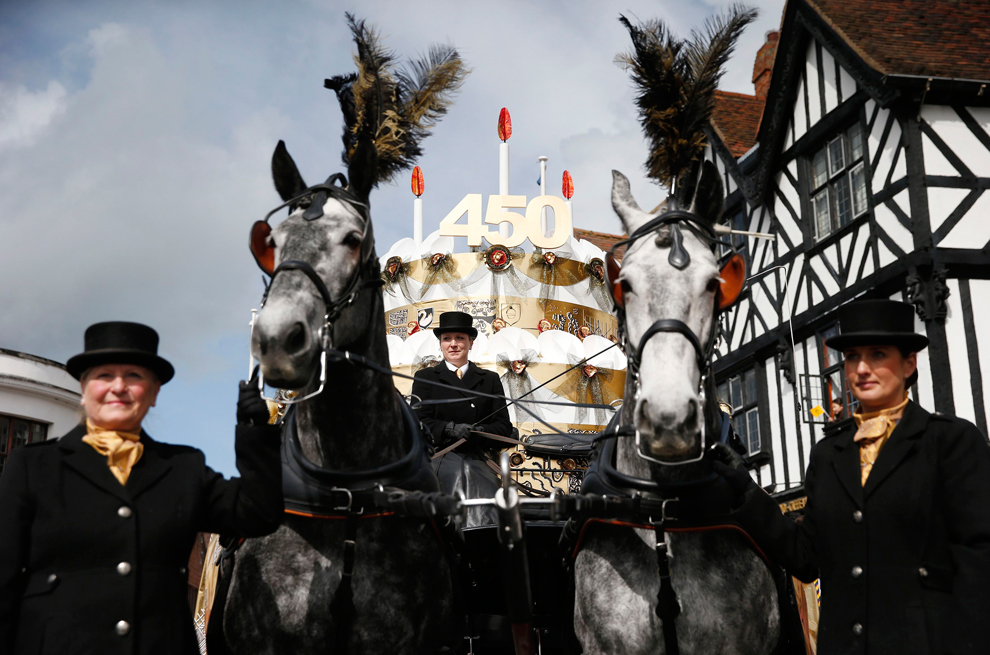 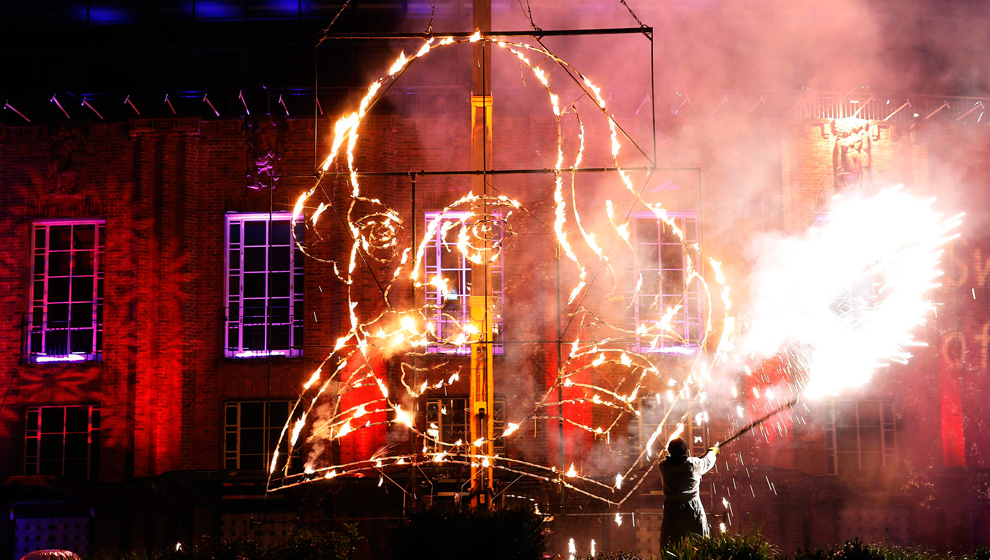 14
A pyrotechnician lights a flaming depiction of William Shakespeare during a firework display at the Royal Shakespeare Company marking the 450th anniversary of Shakespeare's birth in Stratford-upon-Avon, southern England on April 23. (Suzanne Plunket/Reuters) # 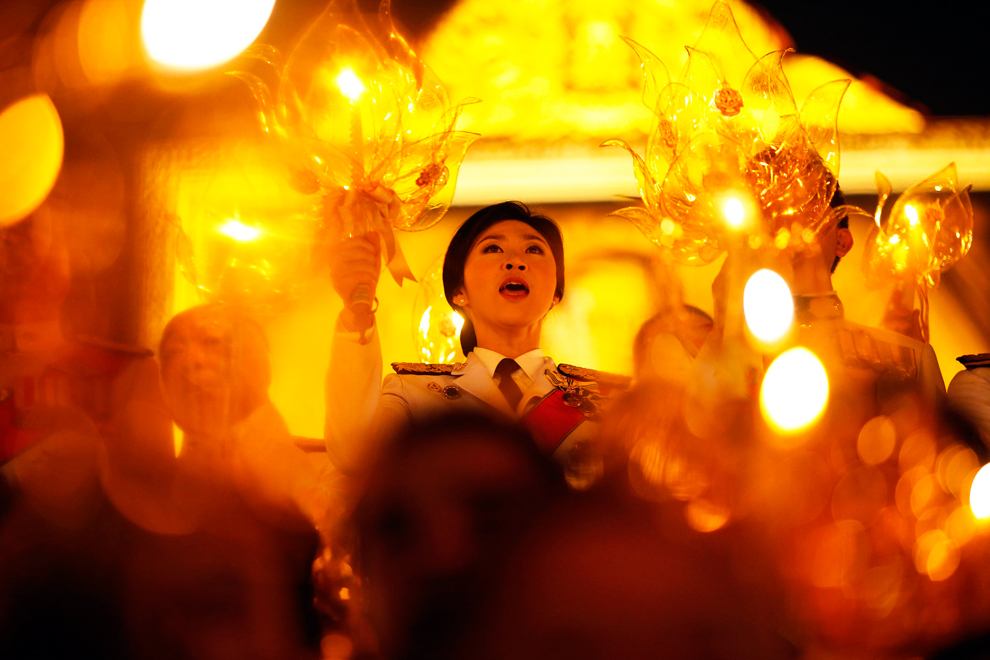 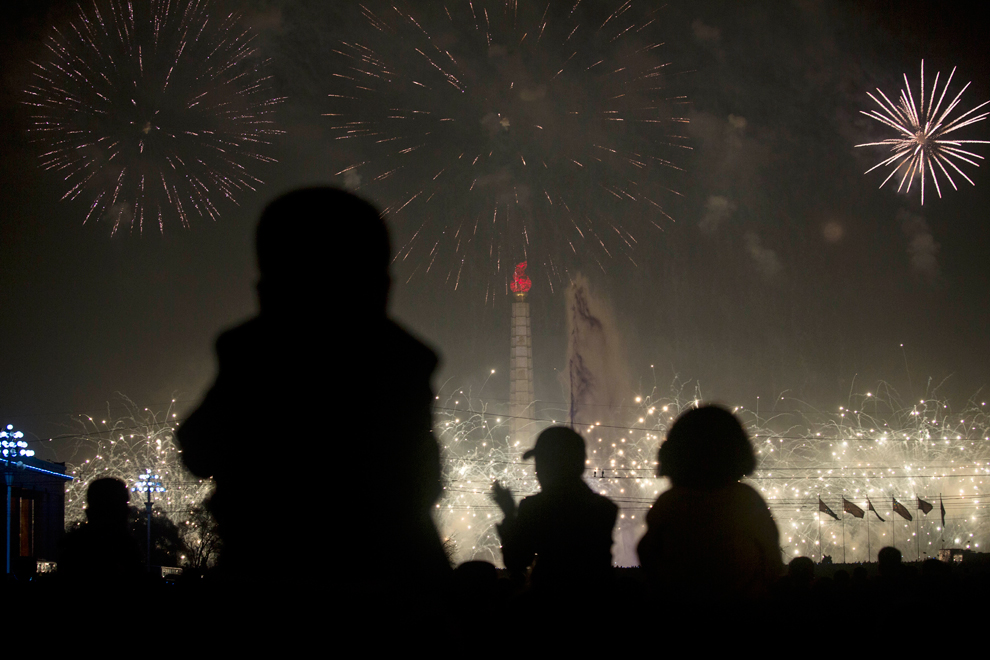 16
North Korean children sit on the shoulders of their parents at Kim Il Sung Square in Pyongyang to watch fireworks over Juche Tower to celebrate the official birthday of the late leader Kim Il Sung on April 15. (David Guttenfelder/Associated Press) # 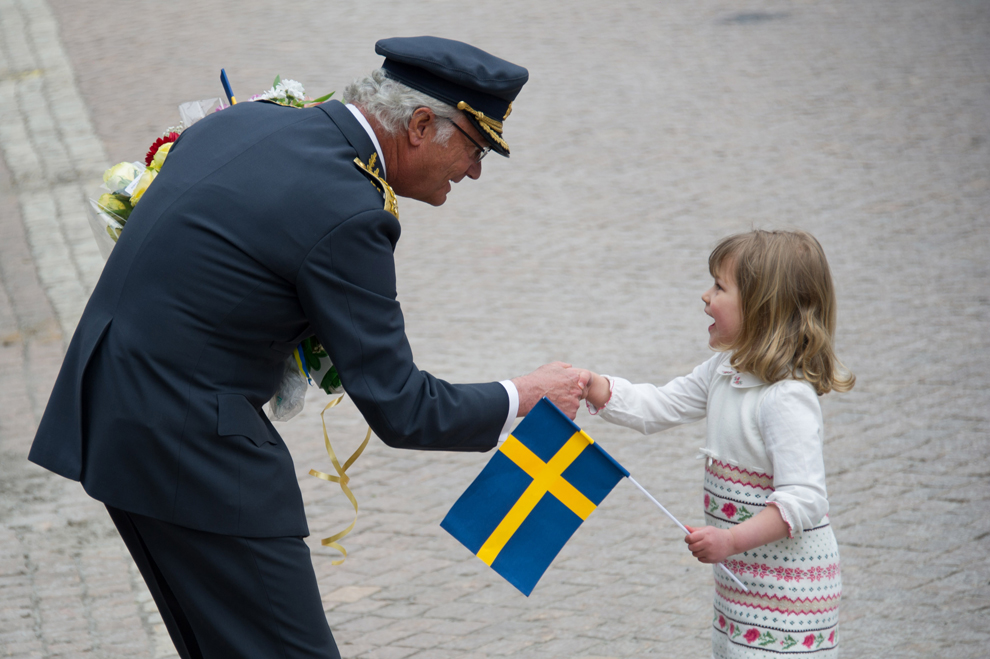 17
King Carl XVI Gustaf of Sweden shakes hands with a young member of the public during his birthday ceremony at the Royal Palace on April 30 in Stockholm, Sweden. (Ivan da Silva/Getty Images) # 18
Dutch King Willem-Alexander and his wife Queen Maxima talk to fans during their walking tour in De Rijp, The Netherlands, on April 26 during the first King's Day (Koningsdag), the celebration of the birthday of the king. (Remko de Waal/EPA) # 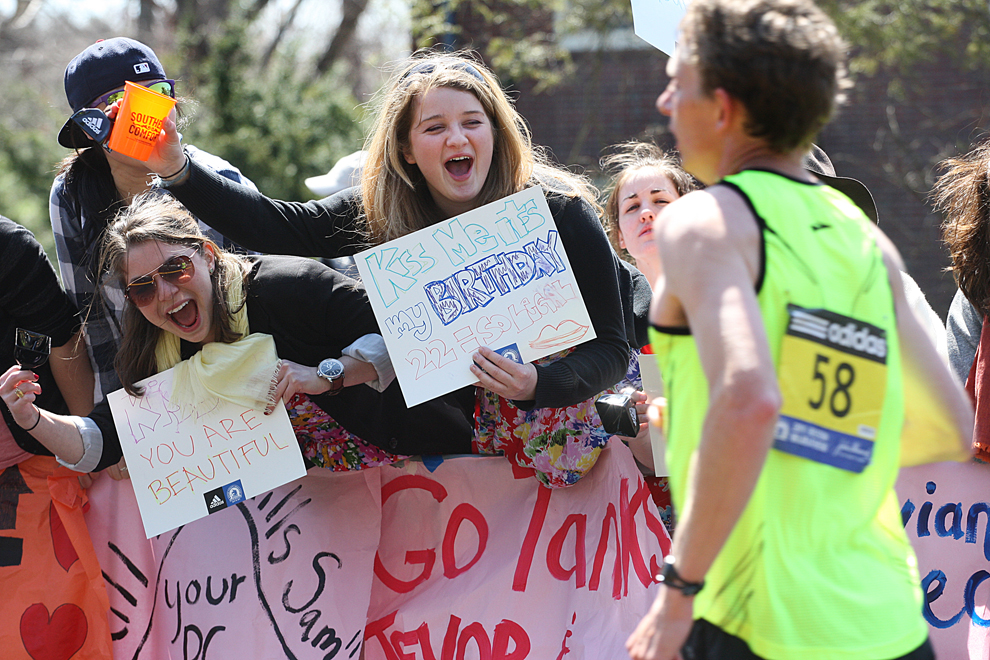 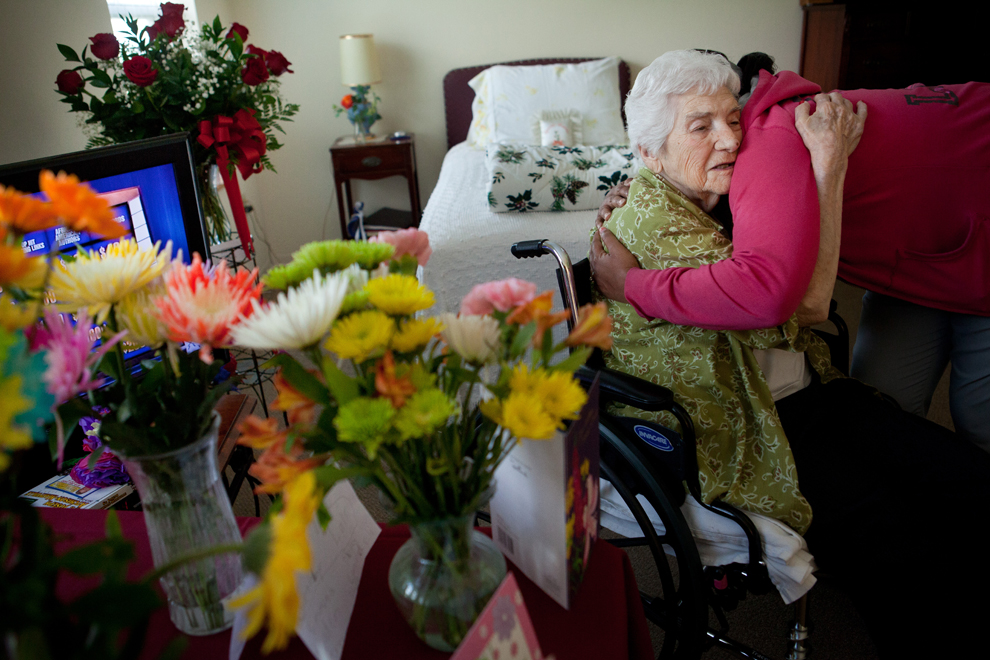 20
Anna Roy receives a hug from Jessica Rodgers for her 102nd birthday on June 5 at Living Community of St. Joseph in St. Joseph, Mo. Roy's family brought her corn dogs and onion rings, as she requested. Her fellow members of East Hills Church of Christ gave her 102 flowers throughout the day. The bouquet of roses in the background is from her grandchildren. (Sait Serkan Gurbuz/St. Joseph News-Press via Associated Press) #

21
Rayvaughn Hines, right, plays with his 2-year-old niece Kamiaya Brown and her birthday balloon outside their home in Chicago on May 10. (Charles Rex Arbogast/Associated Press) #
< Back to front page
RECENT ENTRIES