The first quarter of 2013 was a tough one for many people. It certainly was difficult for us here in Boston. Putting together the best photos of the year can be depressing. For the most part, the wire services move their most dramatic photos of the most significant events and many of those are violent. In this post, you will see photos from the horrific collapse of the garment factory in Bangladesh, the Boston Marathon bombings and you will see a few light moments sprinkled within. Its critical for us to document these tragic moments. Because of the images of the building collapse seen around the world, Bangladesh now has a new labor law that boosts worker rights. But after this edit, I'm going to start gathering some positive images for a future post. --Thea Breite ( 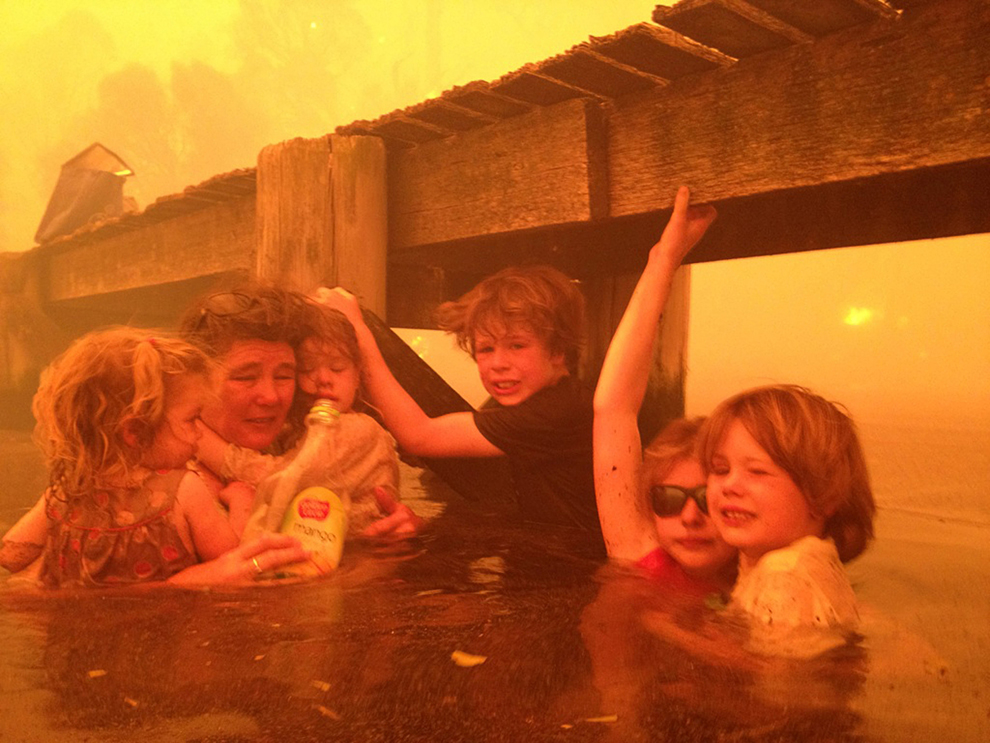 Tammy Holmes, second from left, and her grandchildren, two-year-old Charlotte Walker, left, four-year-old Esther Walker, third from left, nine-year-old Liam Walker, eleven-year-old Matilda, second from right, and six-year-old Caleb Walker, right, take refuge under a jetty as a wildfire rages near-by in the Tasmanian town of Dunalley, east of the state capital of Hobart, Australia on Jan. 4, 2013 The family credits God with their survival from the fire that destroyed around 90 homes in Dunalley. (Holmes Family, Tim Holmes/AP) 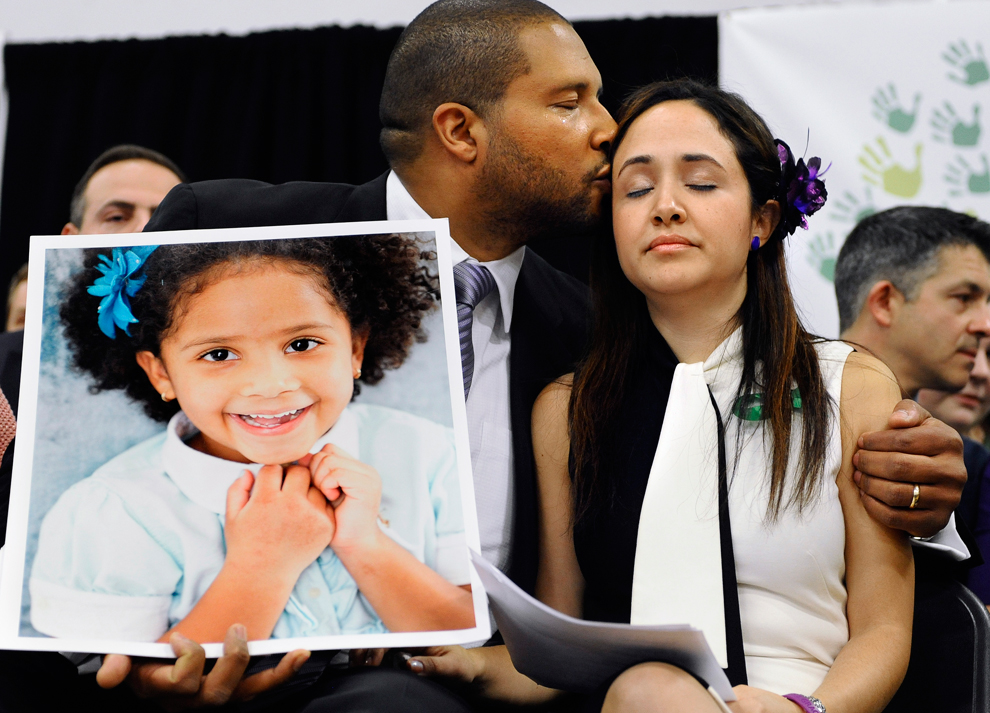 3
An Afghan security officer walks at the scene after an attack by militants in Kabul, Afghanistan, Wednesday, Jan. 16, 2013. Six militants wearing suicide vests including one driving a car packed with explosives attacked the gate of the Afghan intelligence in Kabul, setting off a blast that reportedly caused several deaths and wounded at least 30 civilians. (Ahmad Jamshid/AP)# 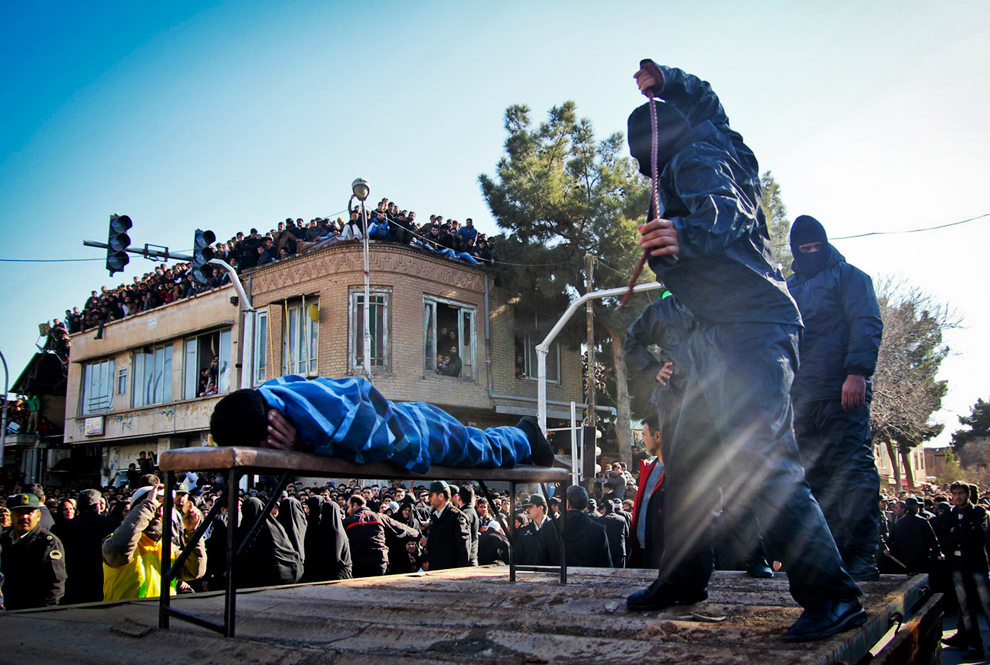 4
An Iranian officer lashes a man, convicted of rape, at the northeastern city of Sabzevar, Iran, Wednesday, Jan. 16, 2013. Rape, like murder and treason, can be punished by the death sentence in Iran, but sometimes judges imposed a sentence of lashes before execution or imprisonment. (Hossein Esmaeli/AP)# 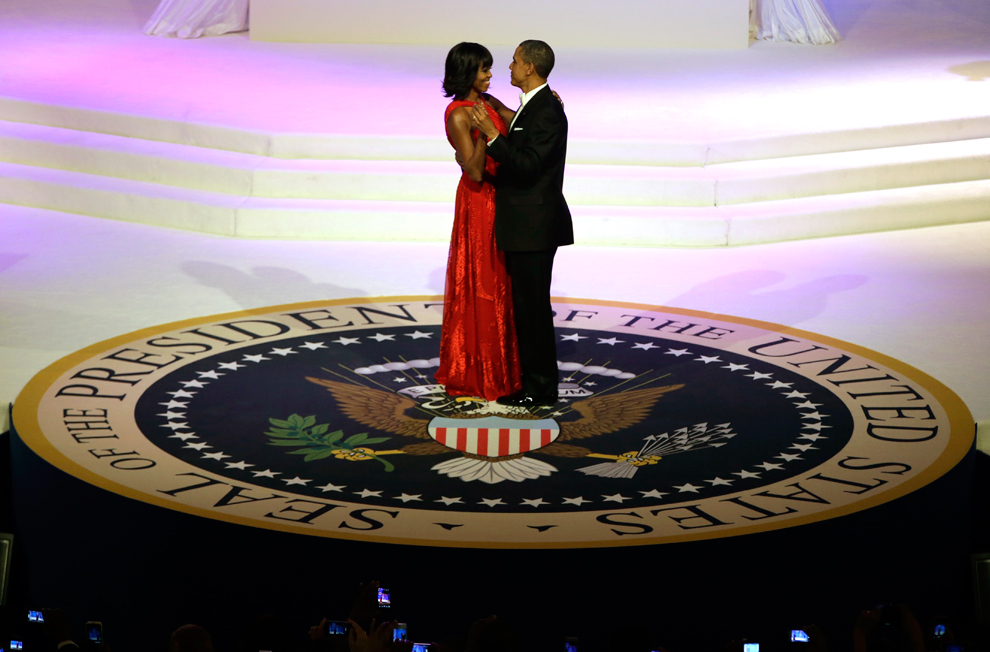 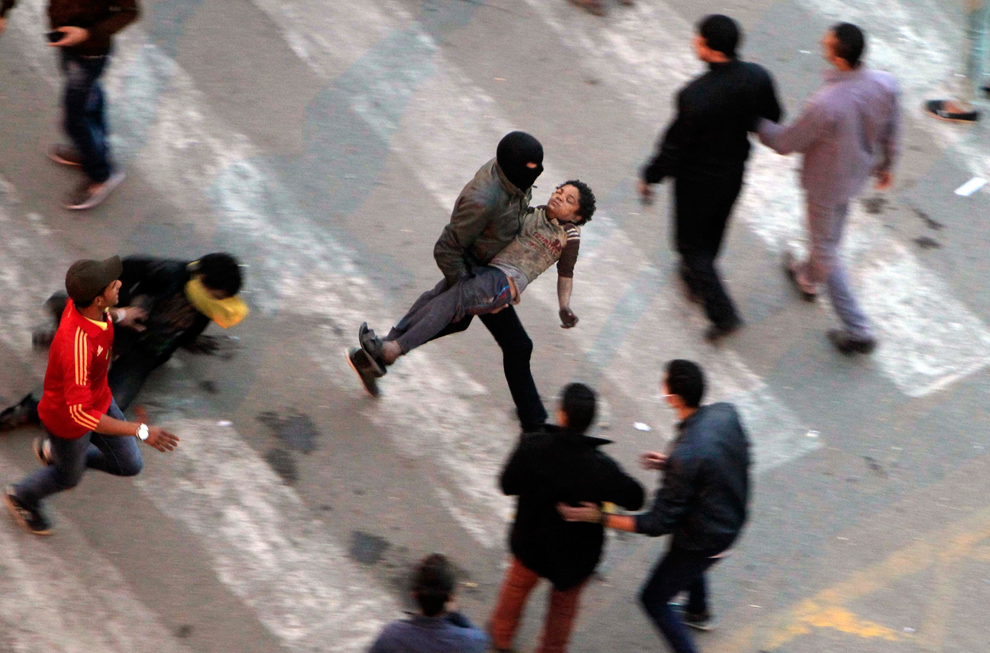 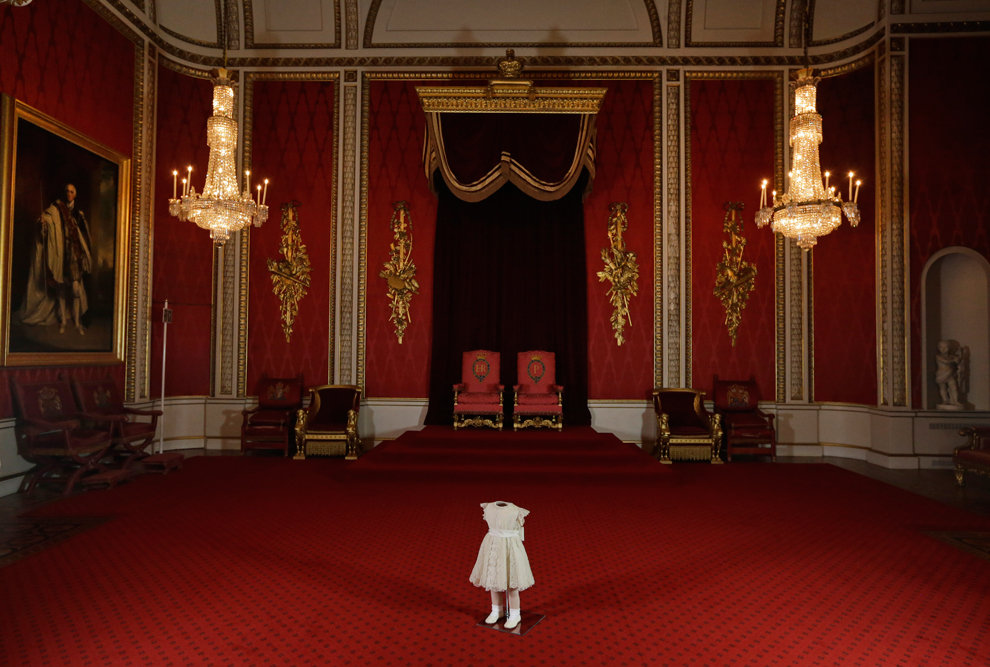 7
The outfit worn by the two-year-old Princess Anne at Britain's Queen Elizabeth II's Coronation on June 2, 1953, is seen during a photo opportunity at the Throne Room of Buckingham Palace in central London, Thursday, Jan. 24, 2013. Summer 2013 marked the 60th anniversary the Coronation and a special exhibition at Buckingham Palace will bring together an array of the dress, uniform and robes worn on that occasion. (Lefteris Pitarakis/AP)# 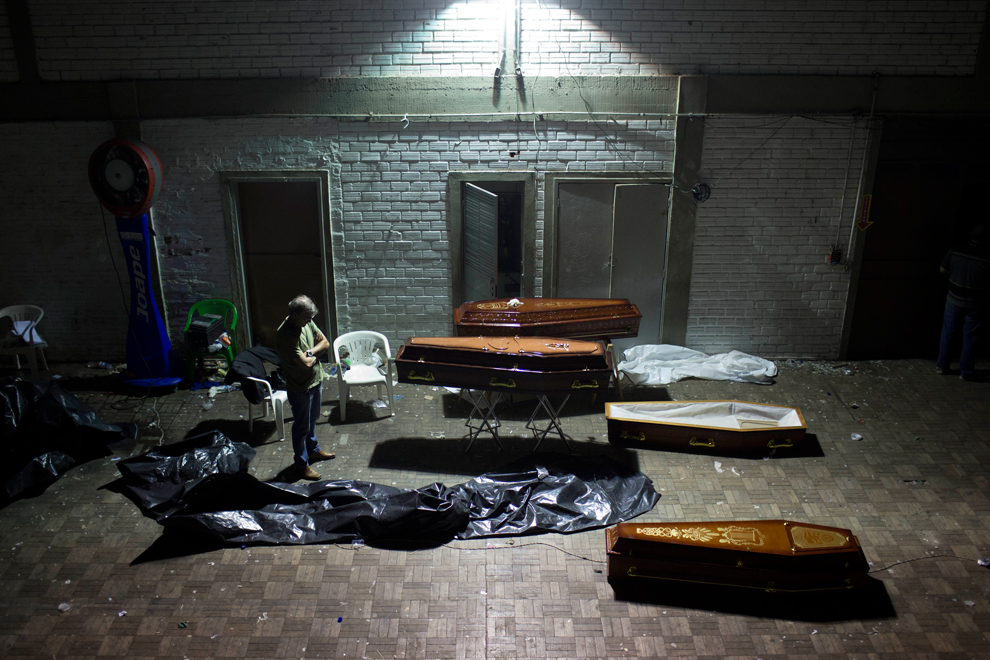 8
A man stands around coffins containing the remains of victims after the bodies were identified at a gymnasium in Santa Maria city, Rio Grande do Sul state, Brazil, Sunday, Jan. 27, 2013. A fast-moving fire roared through the crowded, windowless Kiss nightclub in southern Brazil, within seconds filling the space with flames and a thick, toxic smoke that killed more than 230 panicked partygoers who gasped for breath and fought in a stampede to escape. (Felipe Dana/AP)# 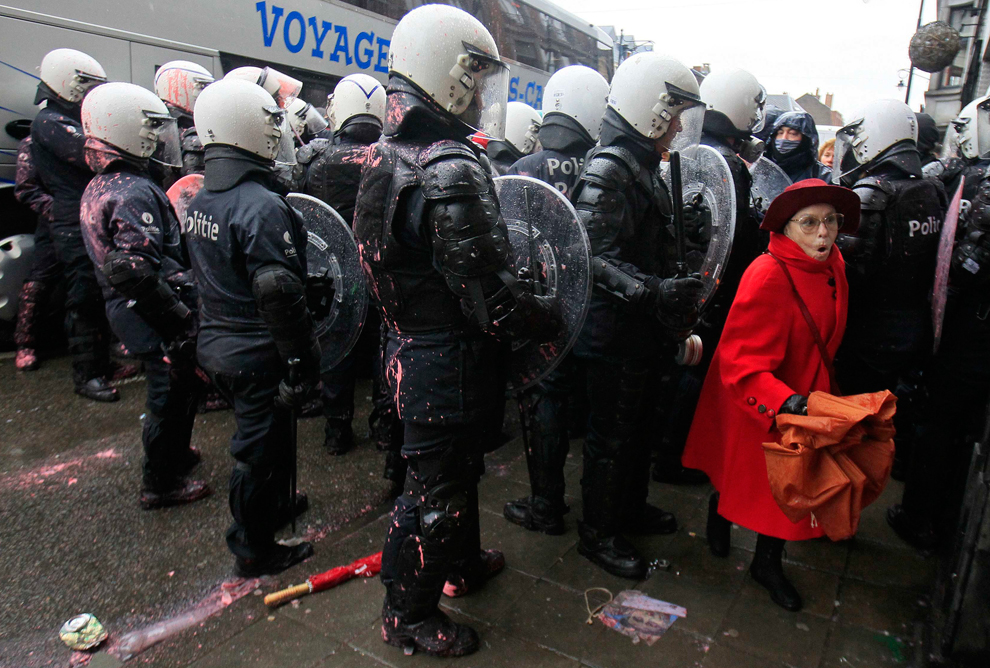 9
A woman walks behind Belgian riot policemen during clashes with Arcelor Mittal workers from several Liege steel plants demonstrating outside the Walloon Region parliament in Namur January 29, 2013. Arcelor Mittal, the world's largest steel producer, plans to shut a coke plant and six finishing lines at its site in Liege, Belgium, which will affect 1,300 employees, the group said. (Yves Herman/REUTERS) # 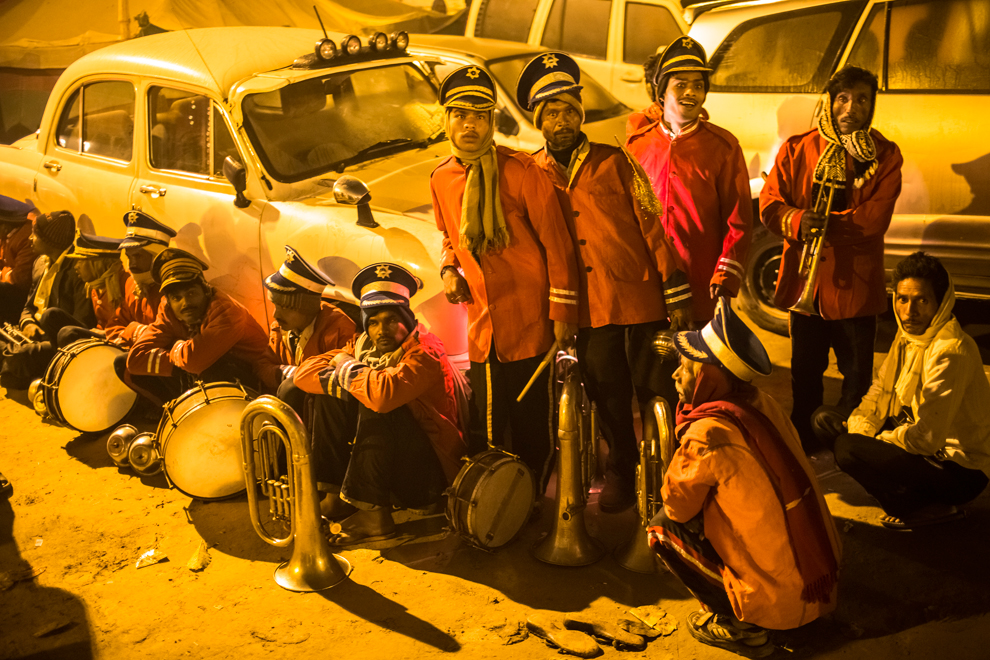 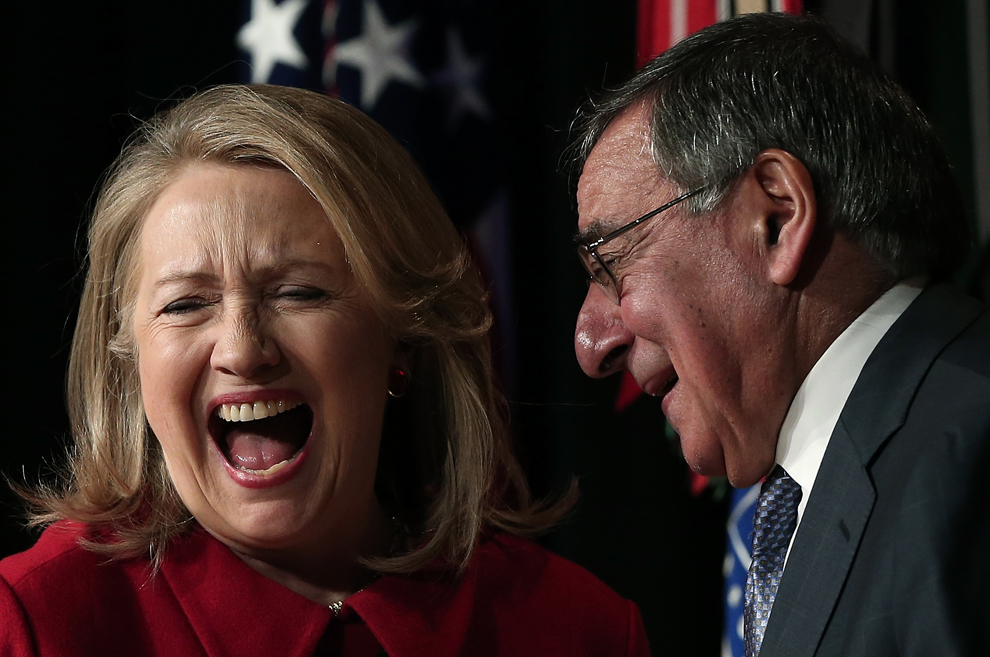 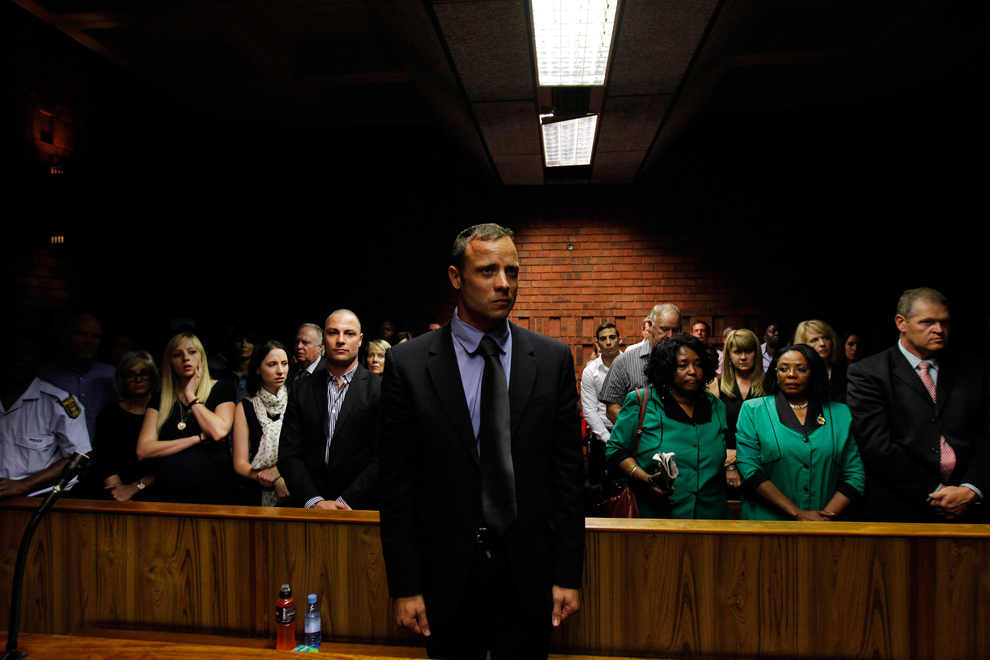 12
"Blade Runner" Oscar Pistorius awaits the start of court proceedings in the Pretoria Magistrates court February 19, 2013. Pistorius, a double amputee who became one of the biggest names in world athletics, was applying for bail after being charged in court with shooting dead his girlfriend, 30-year-old model Reeva Steenkamp, in his Pretoria house. Standing behind Oscar (3rd L), wearing a scarf, is his sister Aimee, and his brother Carl (4th L). To his right in green, are members of the African National Congress (ANC) Women's League. (Siphiwe Sibeko/REUTERS)# 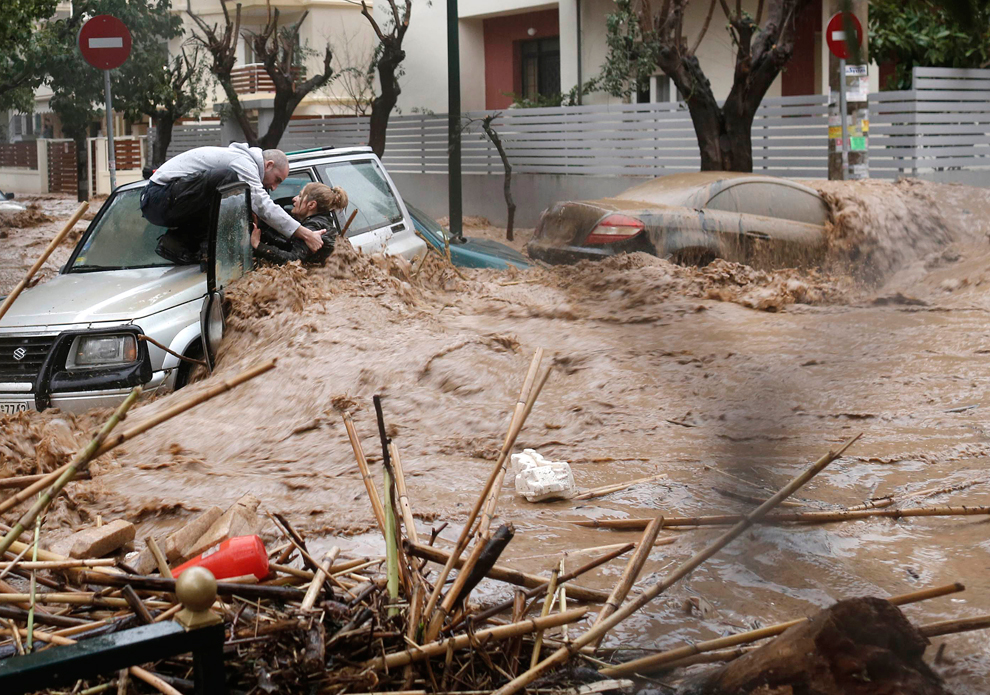 13
A woman is rescued from floodwaters by a resident standing on top of her car during heavy rain in the Chalandri suburb, north of Athens February 22, 2013. (John Kolesidis/REUTER)# 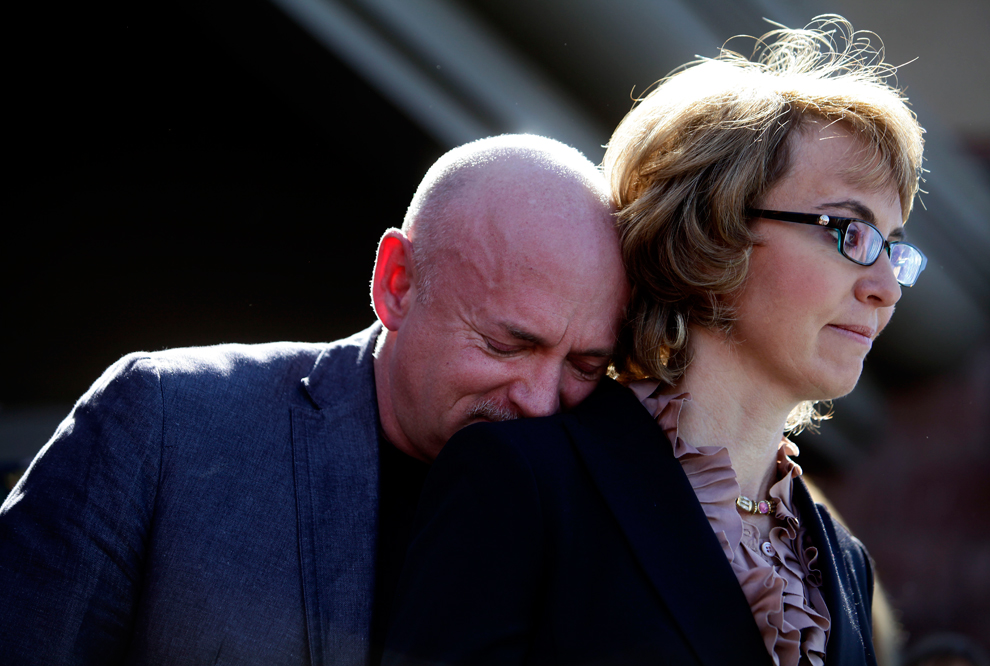 14
Mark Kelly leans his head on the shoulder of his wife and former Congresswoman Gabby Giffords as they attend a news conference asking Congress and the Senate to provide stricter gun control in the United States on March 6, 2013 in Tucson, Arizona. Giffords and Kelly were joined by survivors of the Tucson shooting as they spoke outside the Safeway grocery store where the shooting happened two years ago where six people were killed. (Joshua Lott/Getty Images)#

15
An Afghan woman looks out from a helicopter window during a tour to mark International Women's Day at the International Airport in Kabul March 7, 2013. (Mohammad Ismail/REUTERS)# 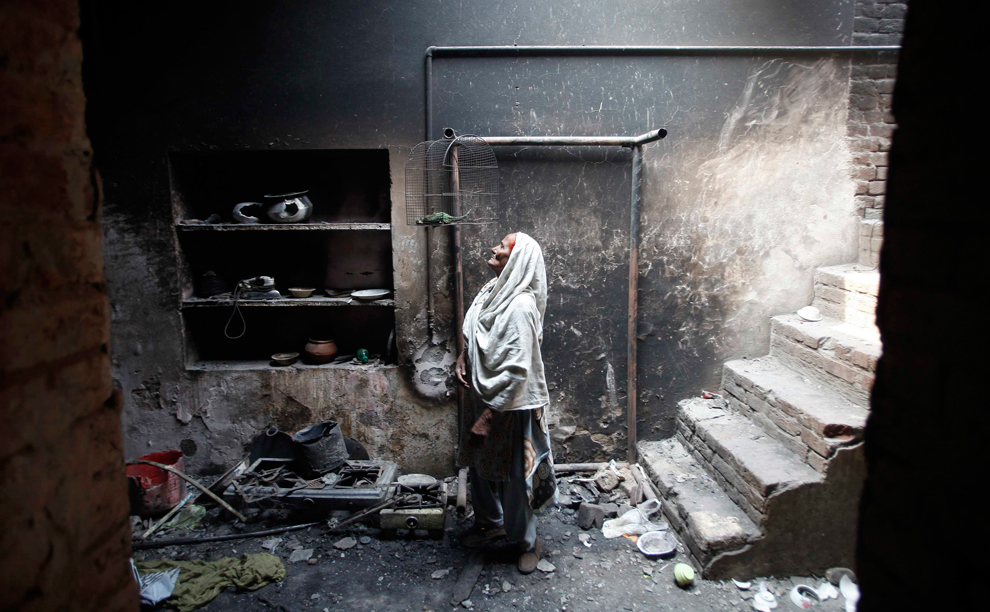 16
Azra, 68, looks at her dead pet bird in a cage at her home, which was previously burnt by a mob, in Badami Bagh, Lahore March 11, 2013. Hundreds of Pakistani Christians took to the streets across the country demanding better protection after the Christian neighbourhood was torched in the city of Lahore in connection with the country's controversial anti-blasphemy law. (Mohsin Raza/REUTERS)# 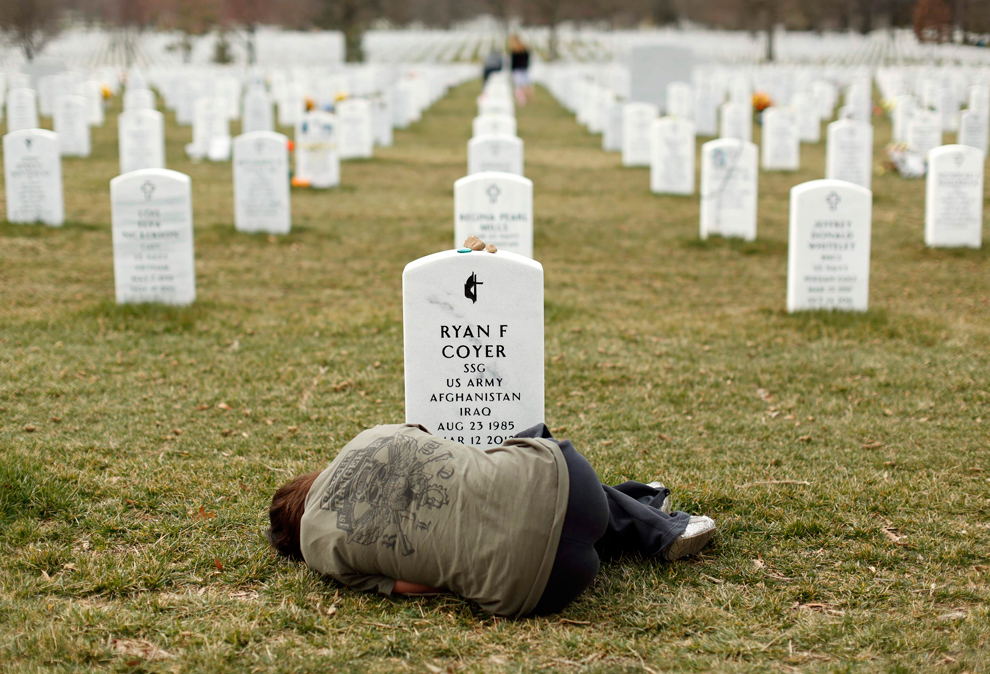 17
Lesleigh Coyer, 25, of Saginaw, Michigan, lies down in front of the grave of her brother, Ryan Coyer, who served with the U.S. Army in both Iraq and Afghanistan, at Arlington National Cemetery in Virginia March 11, 2013. Coyer died of complications from an injury sustained in Afghanistan. (Kevin Lamarque/REUTERS)# 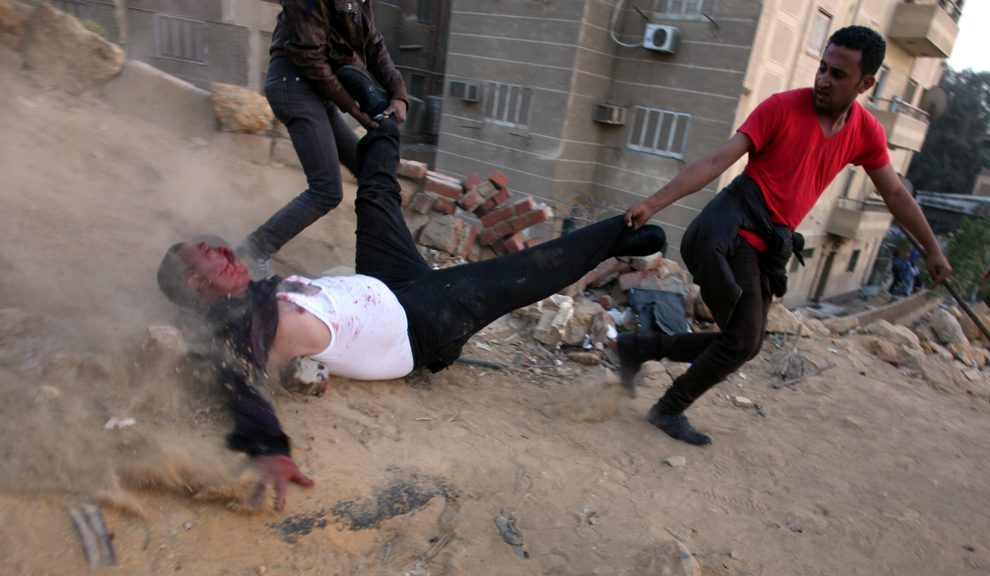 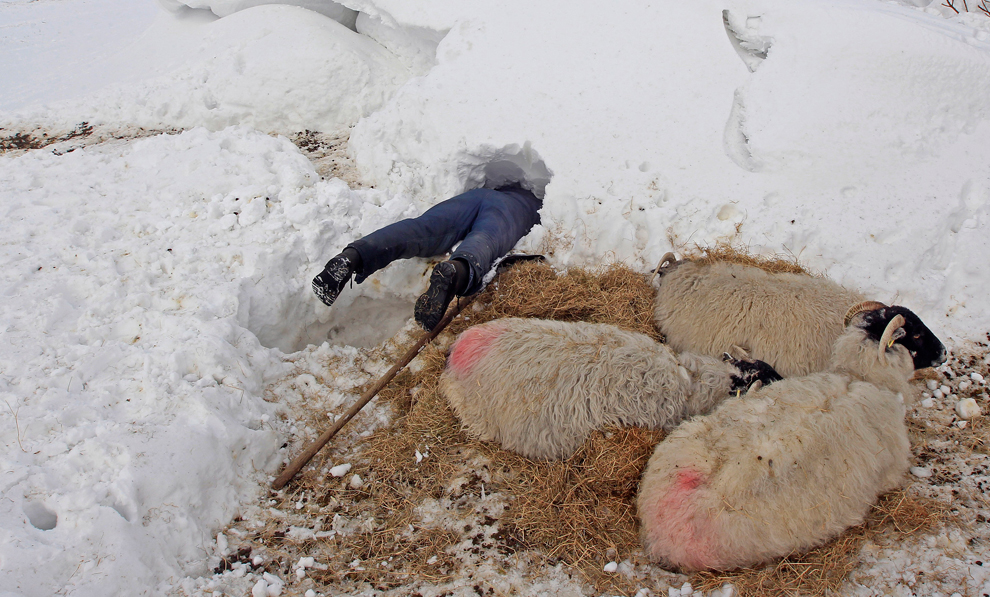 19
Farmer Donald O'Reilly searches for sheep or lambs trapped in a snow drift near weakened animals that had just been rescued, in the Aughafatten area of County Antrim, Northern Ireland March 26, 2013. At least 140,000 homes and businesses in Northern Ireland were left without power over the weekend following heavy snowfall, causing snowdrifts of up to 5 metres (18 feet). (Cathal McNaughton/REUTERS)# 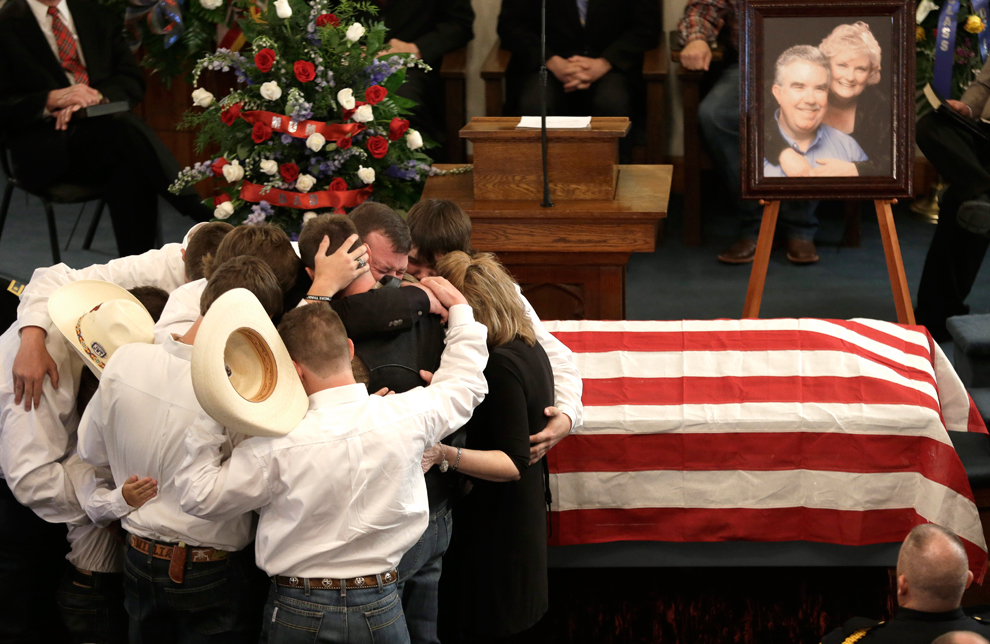 20
The family of Kaufman County District Attorney Mike McLelland and his wife, Cynthia, comfort each other during their funeral services at the First Baptist Church of Wortham Friday, April 5, 2013, in Wortham, Texas. The couple was found shot to death in their house near Forney, about 20 miles east of Dallas. (LM Otero/AP)# 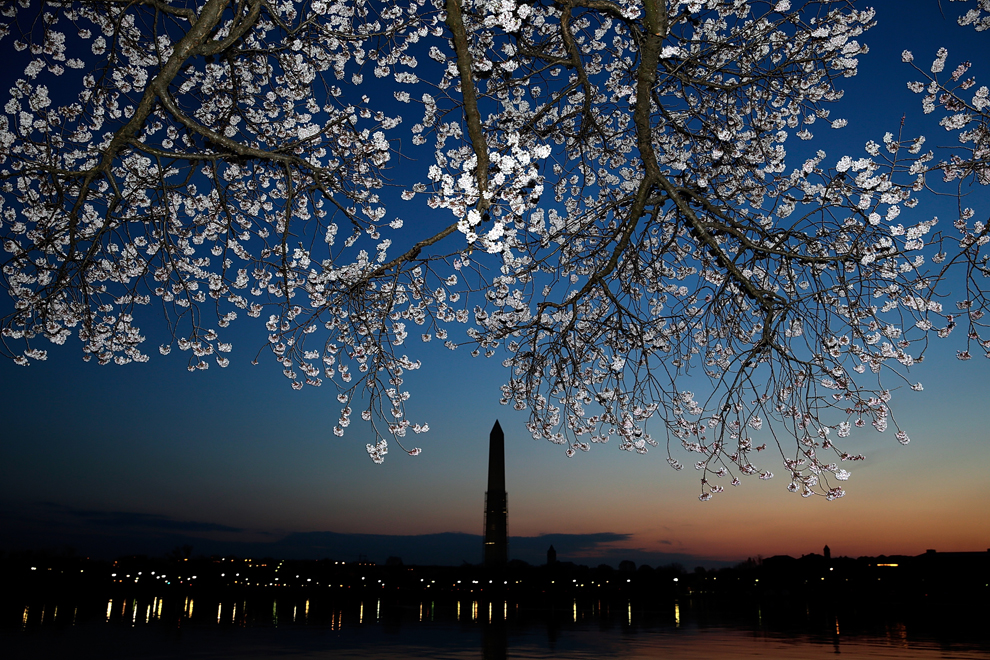 21
Cherry blossoms bloom on the edge of the Tidal Basin after a colder than normal March and chilly April delayed the beginning of the cherry blossom season in the nation's capital April 8, 2013 in Washington, DC. Peak bloom was originally predicted between March 26 and March 30th, with the revised prediction moving to April 6-10. (Win McNamee/Getty Images)# 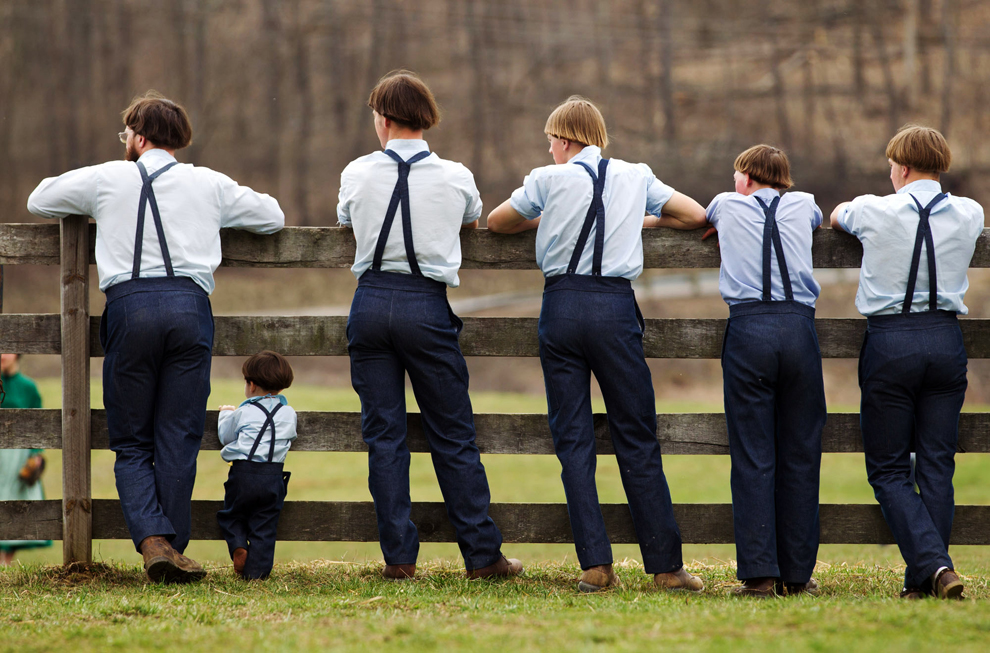 22
Amish boys watch a game of baseball outside the school house in Bergholz, Ohio, on Tuesday, April 9, 2013. Many Amish families gathered following the final day of school for a celebration and farewell picnic. (Scott R. Galvin/AP)# 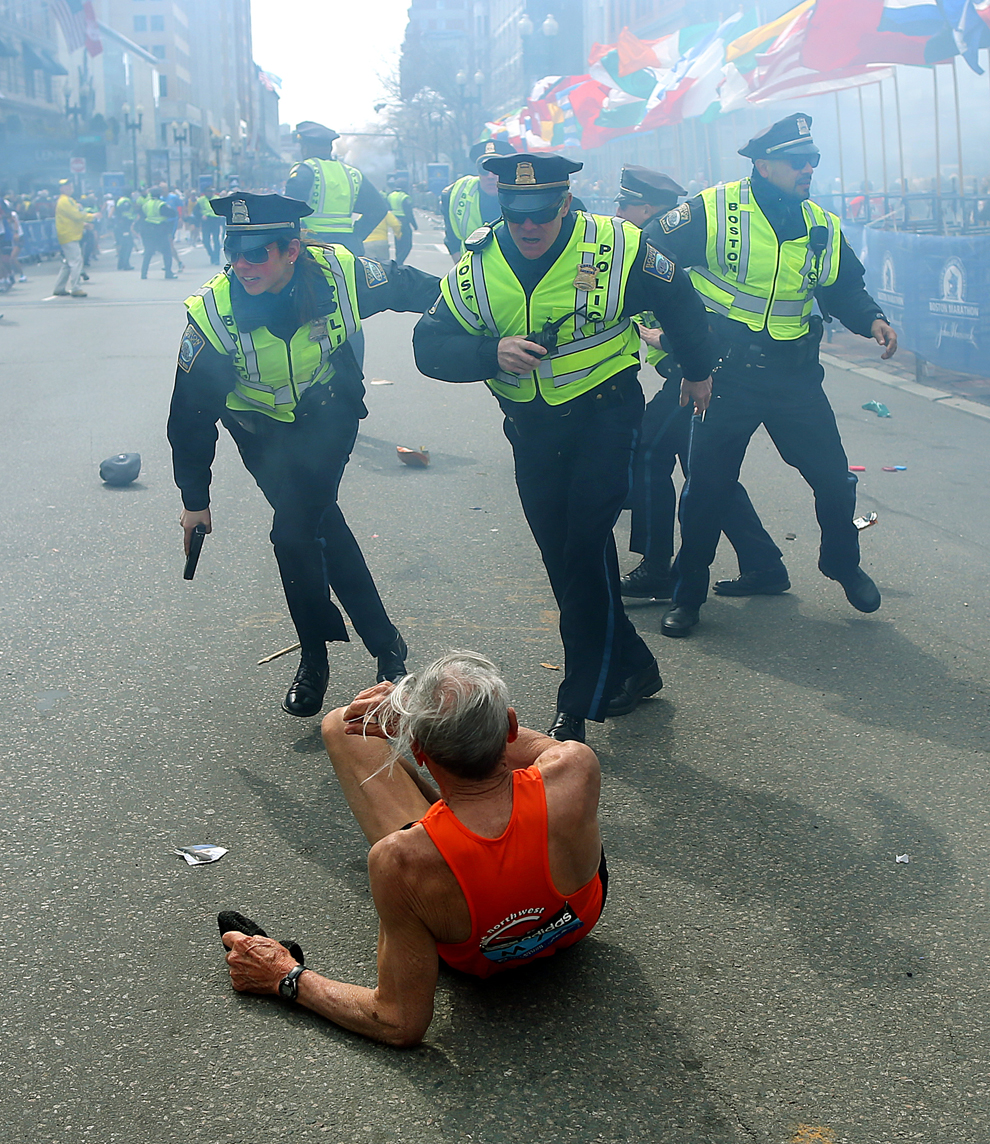 23
Police officers react to the second explosion at the Boston Marathon on April 15, 2013. The two explosions killed three people and wounded many others severely. (John Tlumacki/BOSTON GLOBE)#

24
19-year-old Boston Marathon bombing suspect Dzhokhar Tsarnaev, bloody and disheveled with the red dot of a rifle laser sight on his forehead, raises his hand from inside a boat at the time of his capture by law enforcement authorities in Watertown, Mass. According to State police spokesman David Procopio, Sgt. Sean Murphy, the state police photographer who released this photo and others of the bloodied Tsarnaev during his capture, retired Nov. 1, 2013, days after internal charges against him were upheld for releasing the images. (Sean Murphy/AP/Massachusetts State Police) # 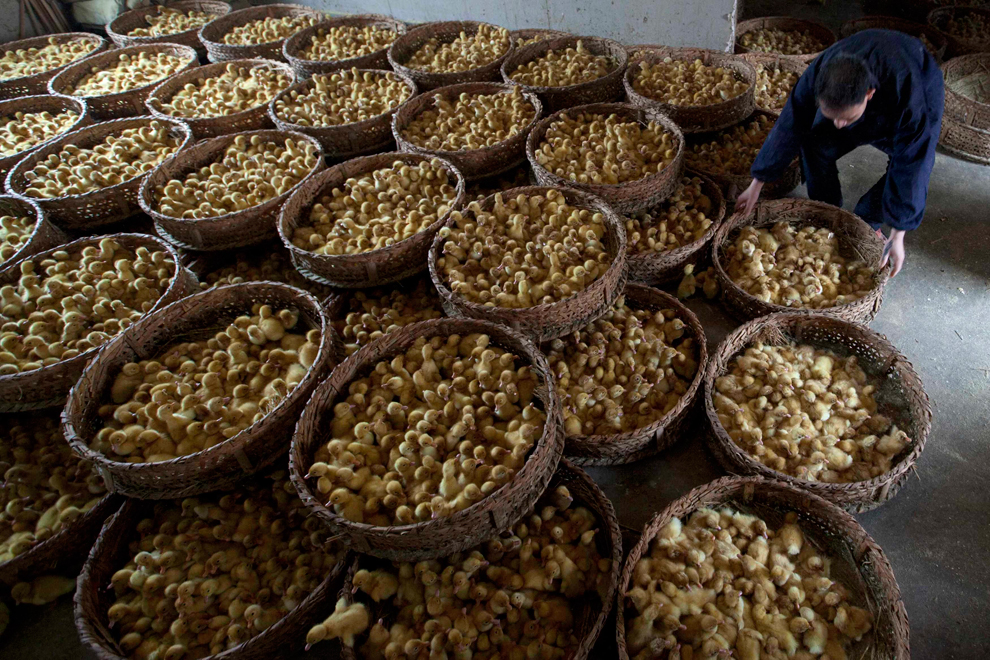 25
A farmer puts baskets of newly hatched ducklings in a hatch room at a poultry egg trading market in Wuzhen town, Tongxiang, Zhejiang province April 18, 2013. China's poultry sector has recorded losses of more than 10 billion yuan ($1.6 billion) since reports emerged of a new strain of bird flu, an official at the country's National Poultry Industry Association told Reuters. An elderly man in eastern China died of bird flu on April 23, 2013, bringing the death toll from a strain that recently emerged in humans to 22, a provincial health agency reported. (Stringer/REUTERS)# Click here to view it.
26
A Bangladeshi man holds on to a woman, both victims of a building collapse, in the debris of Rana Plaza garment factory in Savar near Dhaka, Bangladesh, April 25, 2013. The collapse of Rana Plaza in Dhaka that killed 1,129 people. (Suman Paul/AP)# 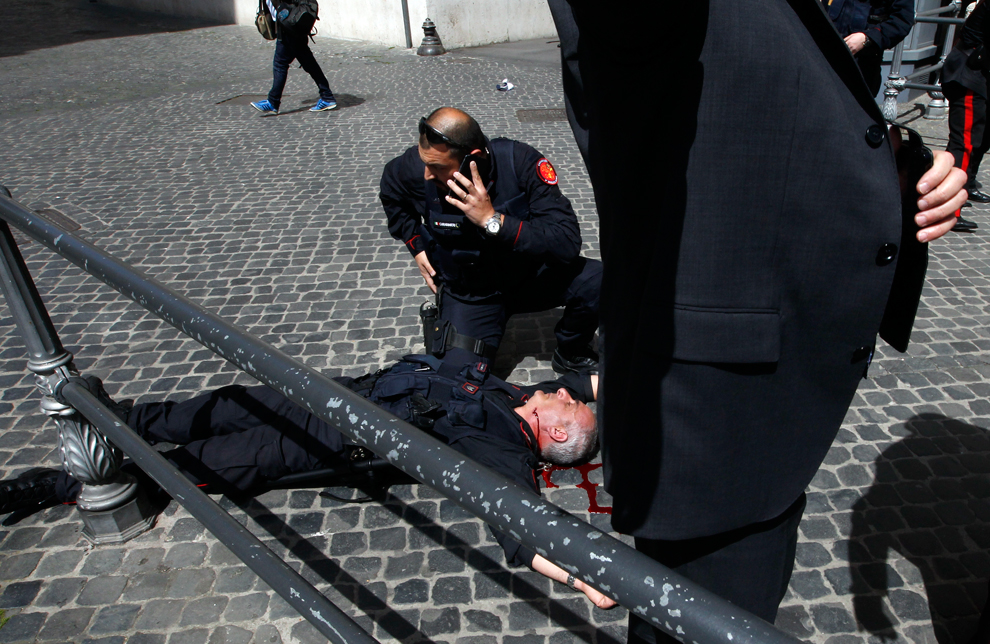 27
A Carabiniere police officer lies on the ground after gunshots were fired in front of Chigi Palace in Rome April 28, 2013. Two police officers were shot and wounded outside the Italian prime minister's office as Enrico Letta's new government was being sworn in around a km (0.62 miles) away at the president's palace, RAI state television reported. (Giampiero Sposito/REUTERS)# 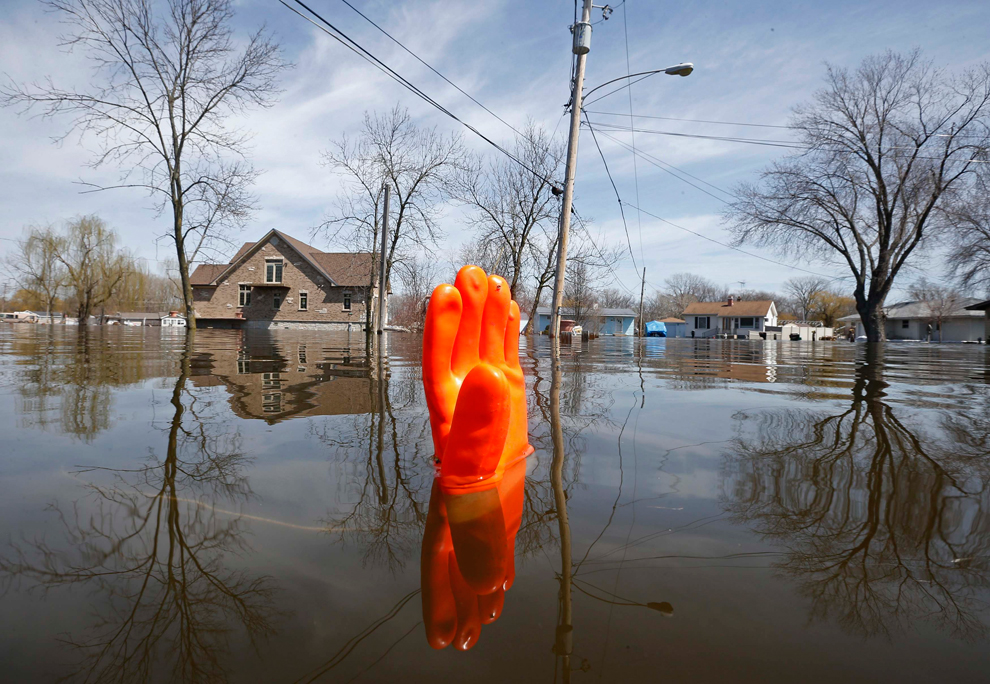 28
A rubber glove being used as a marker bobs in the water after flooding in Fox Lake, Illinois April 22, 2013. The Fox River is expected to crest after heavy rains brought flooding to the area the previous week. (Jim Young/REUTERS)#