A massive typhoon, reported as one of the strongest storms on record this year, came ashore in the central Philippines today. The storm packed sustained winds of 147 miles per hour and forced more than 700,000 people from their homes, killing at least four. -- Lloyd Young ( 19 photos ) 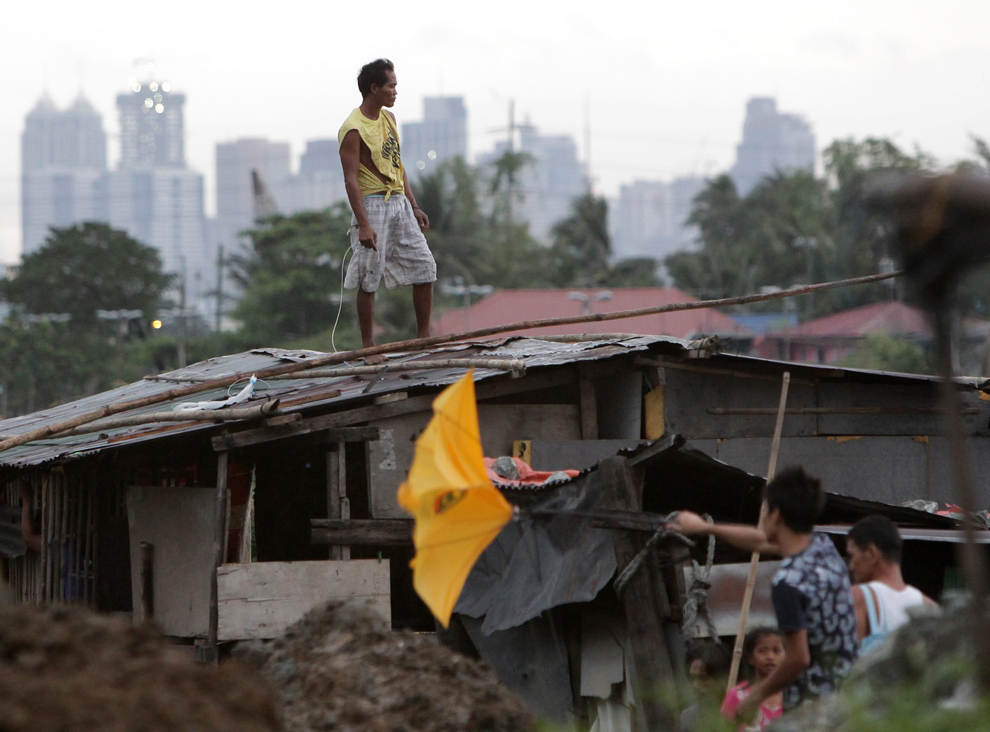 A Filipino resident stands on a roof of a home with a backdrop of a cloudy financial district in Manila, Philippines, Nov. 8. The most powerful cyclone in three decades battered the Philippines, killing at least three people and displacing over 718,000, disaster relief officials said. Typhoon Haiyan was packing maximum sustained winds of 235 kilometres per hour (kph) and gusts of up to 275 kph as it made five landfalls over the eastern and central provinces of Eastern Samar, Leyte, Cebu and Iloilo, the national weather bureau said. (Francis R. Malasig/EPA) 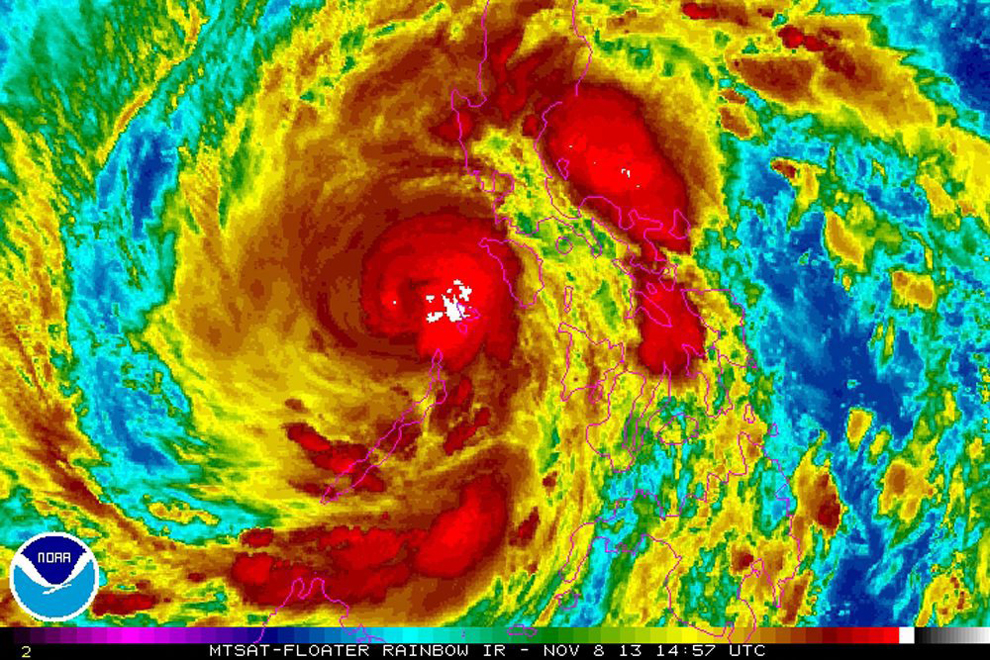 2
A handout satelite image shows Typhoon Haiyan striking the Philippines, Nov. 8. The Philippine disaster relief agency says at least three people have been killed and more than half a million displaced as Typhoon Haiyan pummels the archipelago. Haiyan, packing maximum winds of 235 kilometres per hour (kph) and gusts of up to 275 kph, made landfall at five locations, according to the weather bureau. (National Oceanic and Atmosphere Adminstration/EPA) # 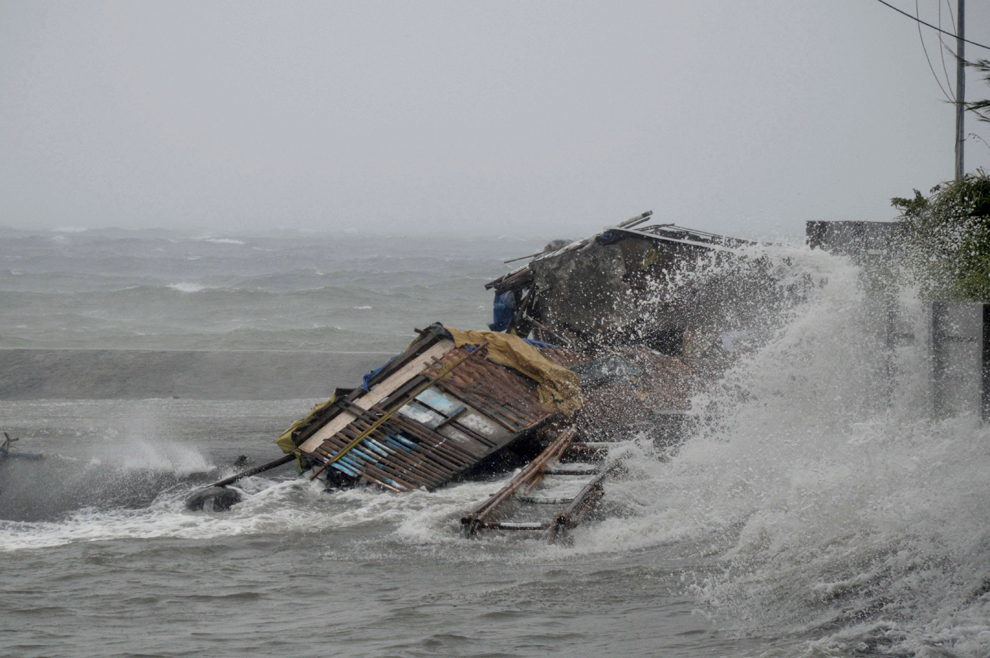 3
A house is engulfed by the storm surge brought about by powerful typhoon Haiyan that hit Legazpi city, Albay province on Nov. 8, about 520 kilometers (325 miles) south of Manila, Philippines. Typhoon Haiyan, one of the most powerful typhoons ever recorded slammed into the Philippines, setting off landslides, knocking out power in one entire province and cutting communications in the country's central region of island provinces. (Nelson Salting/Associated Press) # 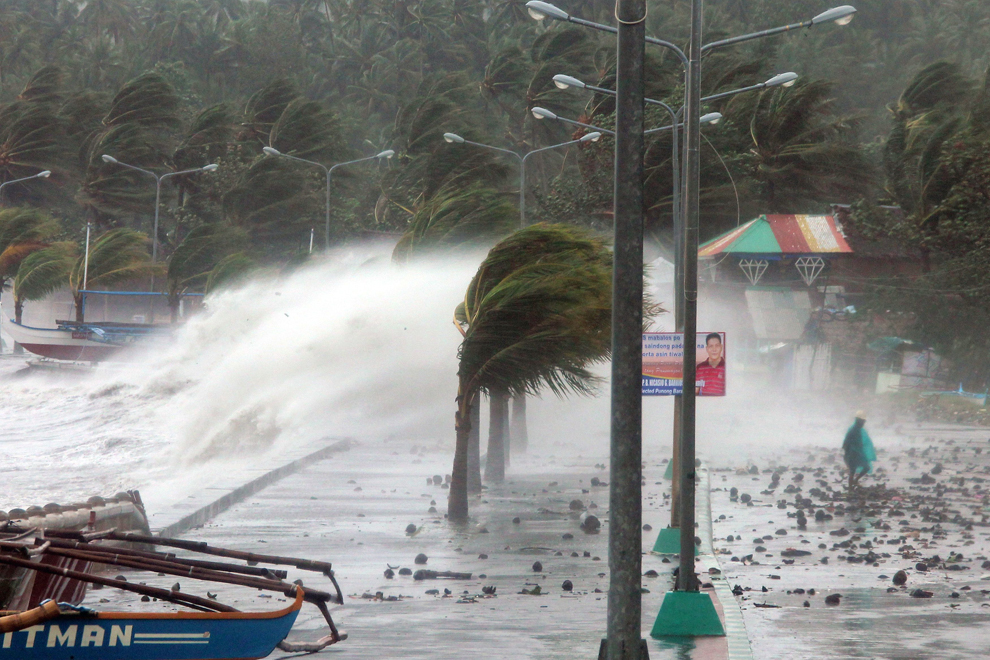 5
A resident walks past high waves pounding the sea wall amidst strong winds as Typhoon Haiyan hit the city of Legaspi, Albay province, south of Manila on Nov. 8. One of the most intense typhoons on record whipped the Philippines on Nov. 8, killing three people and terrifying millions as monster winds tore roofs off buildings and giant waves washed away flimsy homes. (Charism Sayat/AFP/Getty Images) # 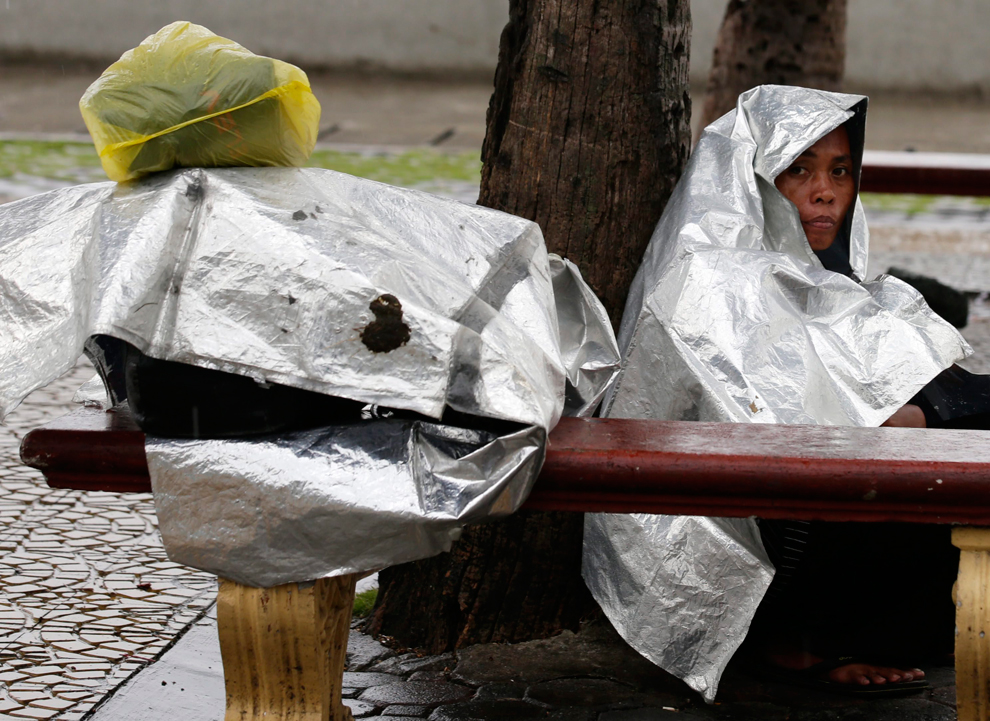 6
A Filipino woman uses a plastic sheet during a downpour brought by Typhoon Haiyan in Manila, Philippines, on Nov. 8. The most powerful cyclone in three decades battered the Philippines killing at least one, forcing hundreds of thousands to flee their homes, and cutting power and communication. (Dennis M. Sabagan/EPA) # 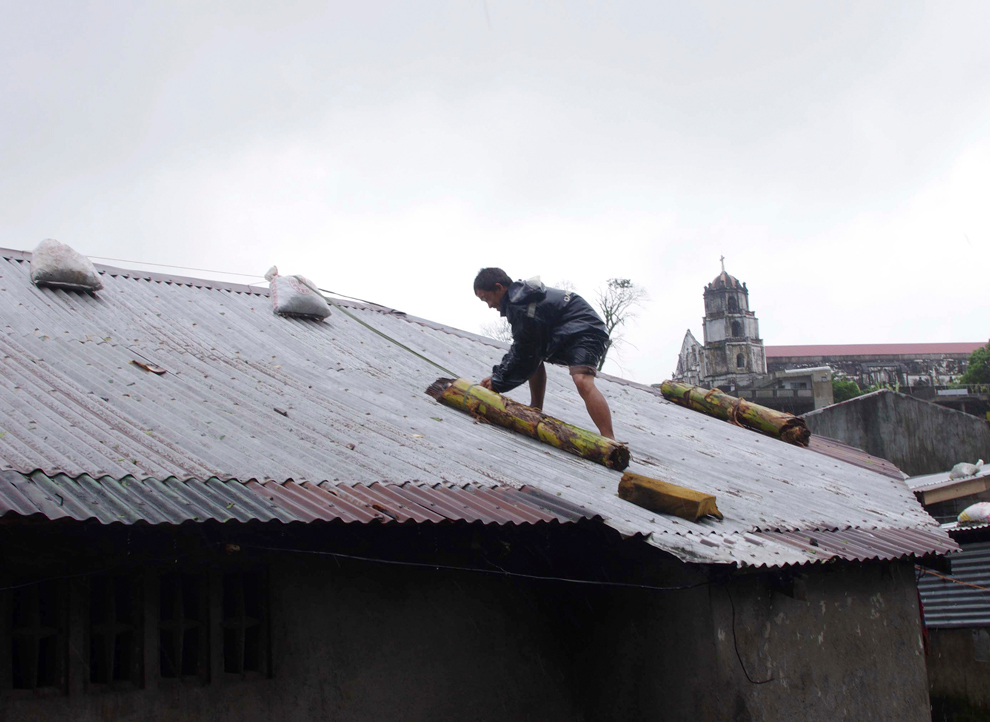 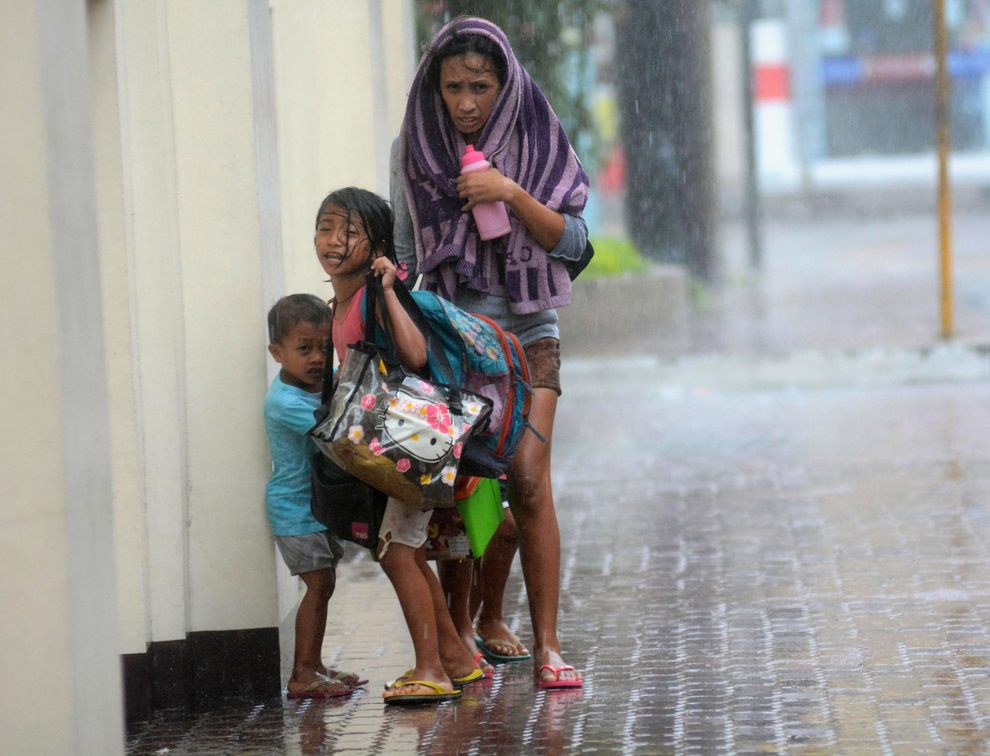 8
A mother takes refuge with her children as Typhoon Haiyan hits Cebu city, central Philippines on Nov. 8. Typhoon Haiyan, the strongest typhoon in the world this year and possibly the most powerful ever to hit land battered the central Philippines, forced millions of people to flee to safer ground, cut power lines and blew apart houses. Haiyan, a category-5 super typhoon, bore down on the northern tip of Cebu Province, a popular tourist destination with the country's second-largest city, after lashing the islands of Leyte and Samar with 275 kph (170 mph) wind gusts and 5-6 meter (15-19 ft) waves. (Zander Casas/Reuters) # 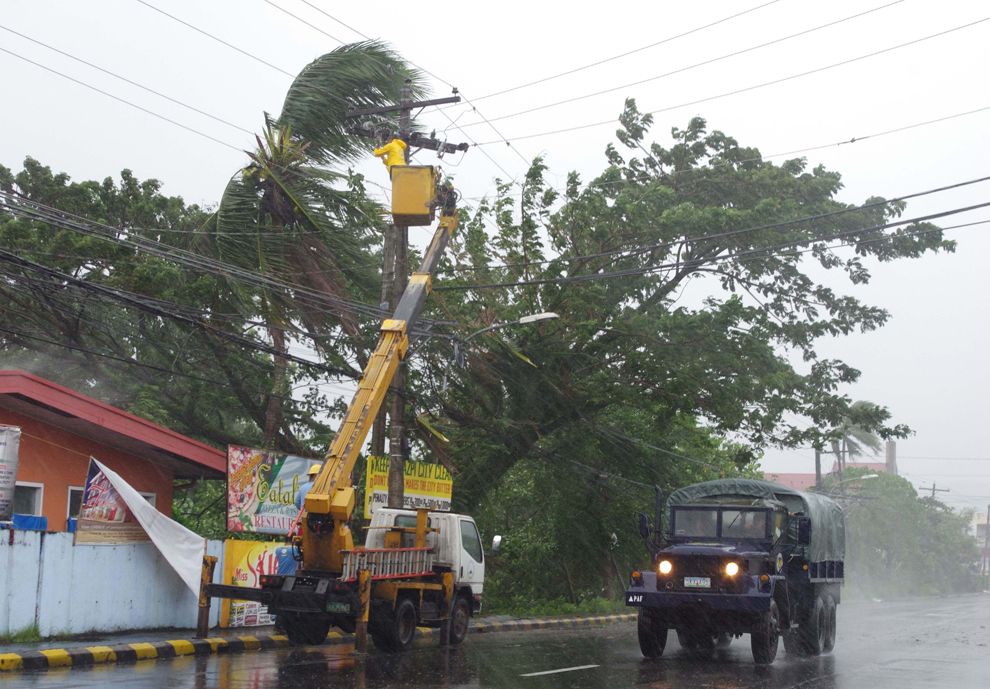 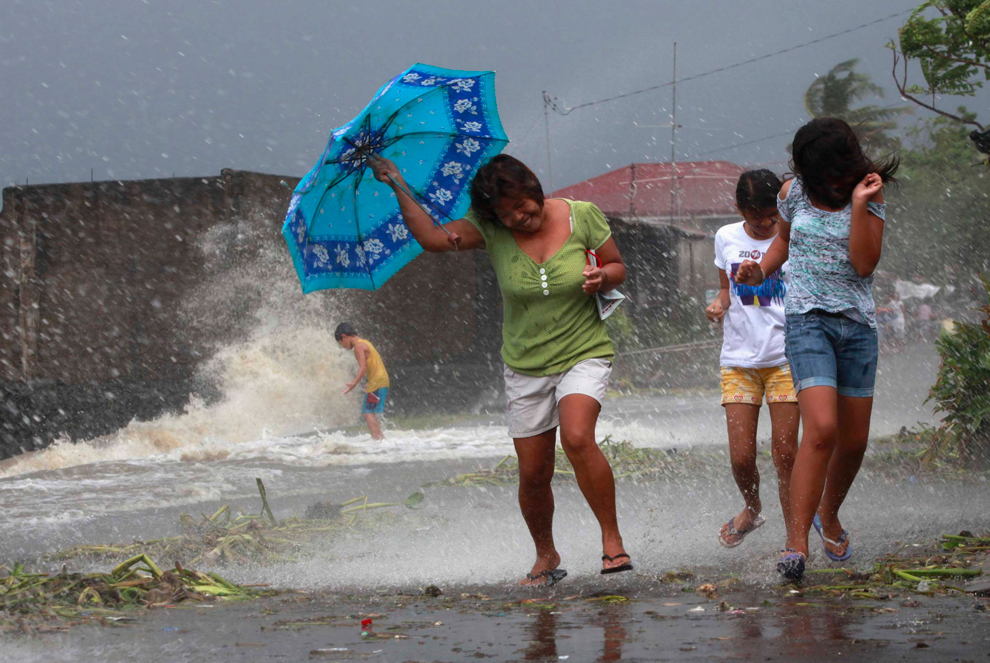 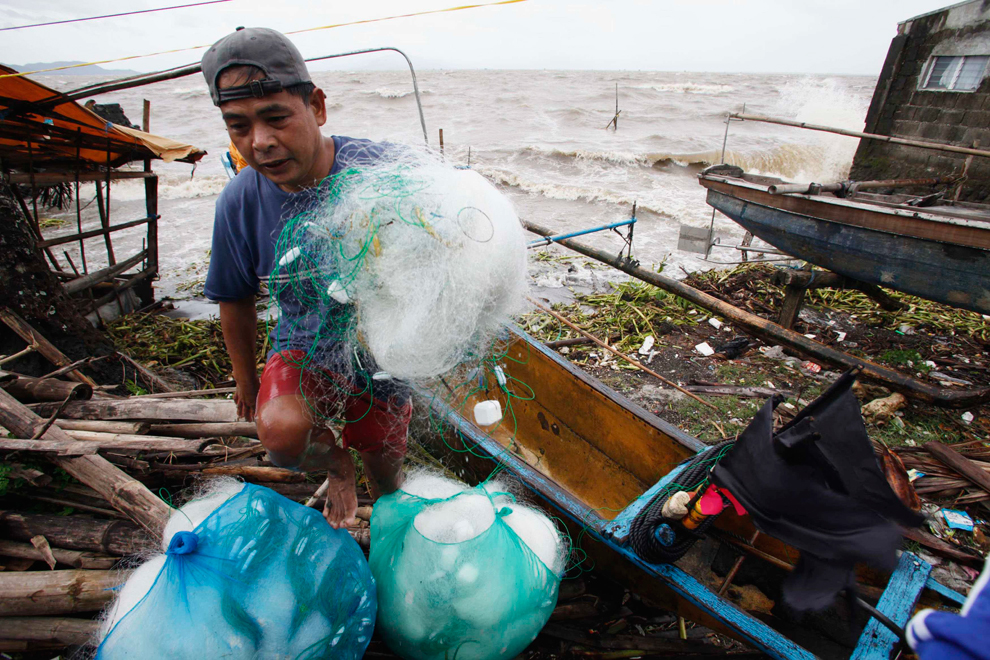 11
A fisherman carries his net after making it safely back to shore in the fishing village after a strong winds from Typhoon Haiyan battered Bayog town in Los Banos, Laguna city, south of Manila on Nov. 8. (Charlie Saceda/Reuters) # 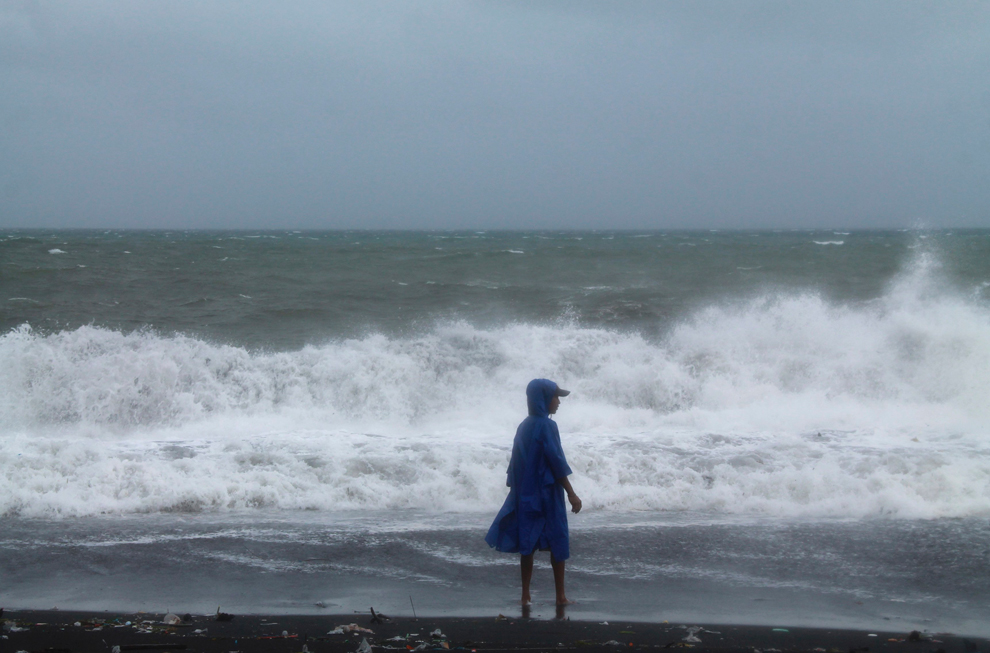 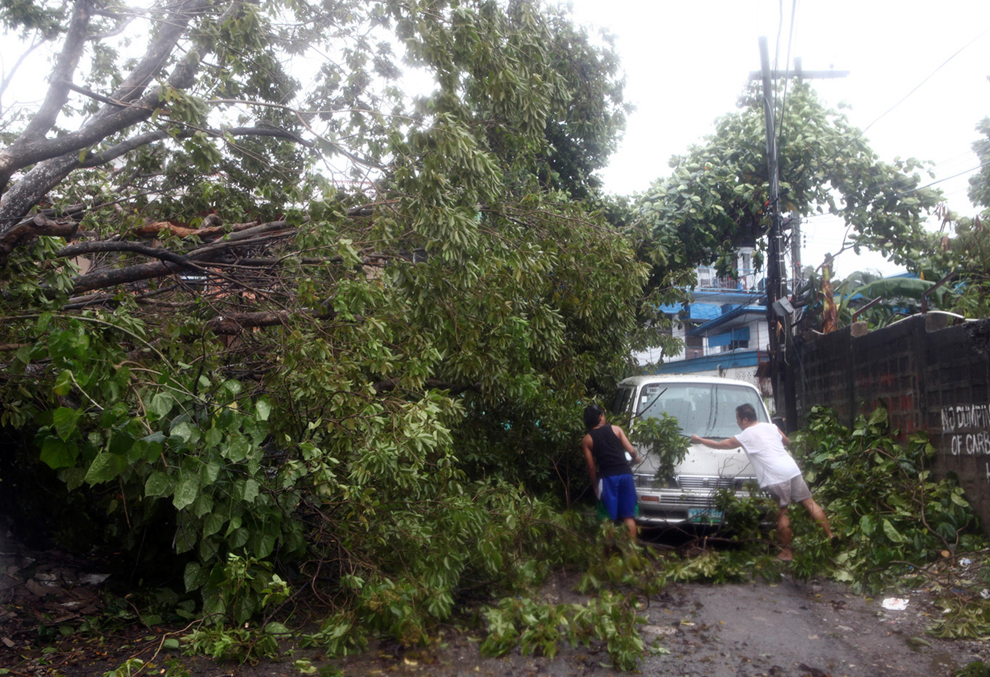 13
Residents clear the road after a tree was toppled by strong winds and damaged a van at the onslaught of powerful typhoon Haiyan that hit the island province of Cebu, Philippines on Nov. 8. (Chester Baldicantos/Associated Press) # 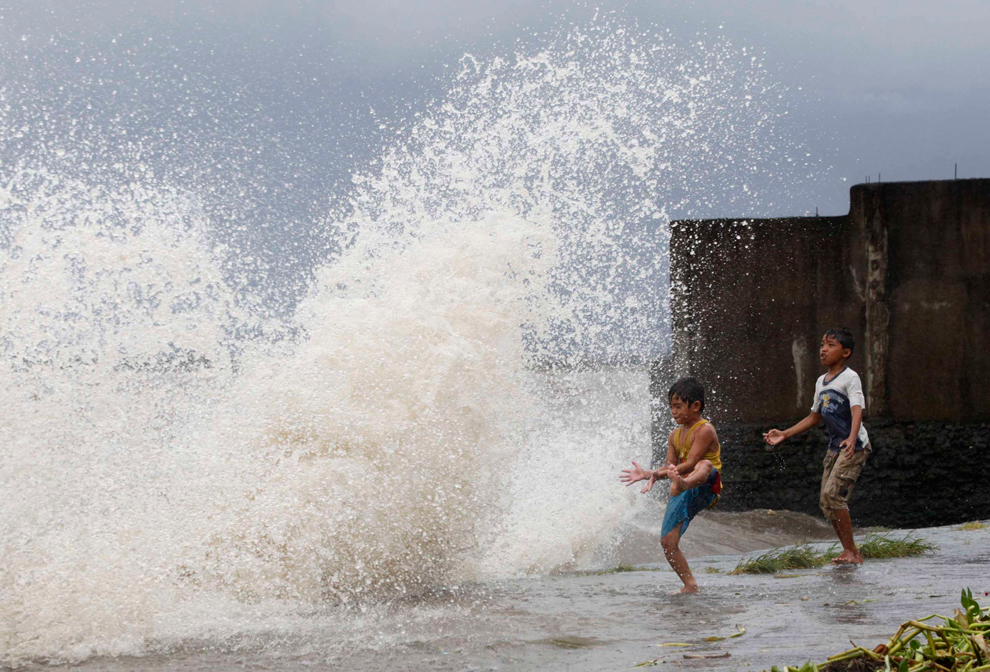 14
Boys play next to strong waves in a coastal village as strong winds from Typhoon Haiyan battered Bayog town in Los Banos, Laguna, south of Manila on Nov. 8. (Charlie Saceda/Reuters) # 15
A fisherman secures his outrigger in a river near Manila bay on Nov. 8. Super Typhoon Haiyan smashed into coastal communities on the central Philippine island of Samar, about 600 kilometres (370 miles) southeast of Manila, before dawn with maximum sustained winds of about 315 kilometres (195 miles) an hour. (Jay Directo/AFP/Getty Images) # 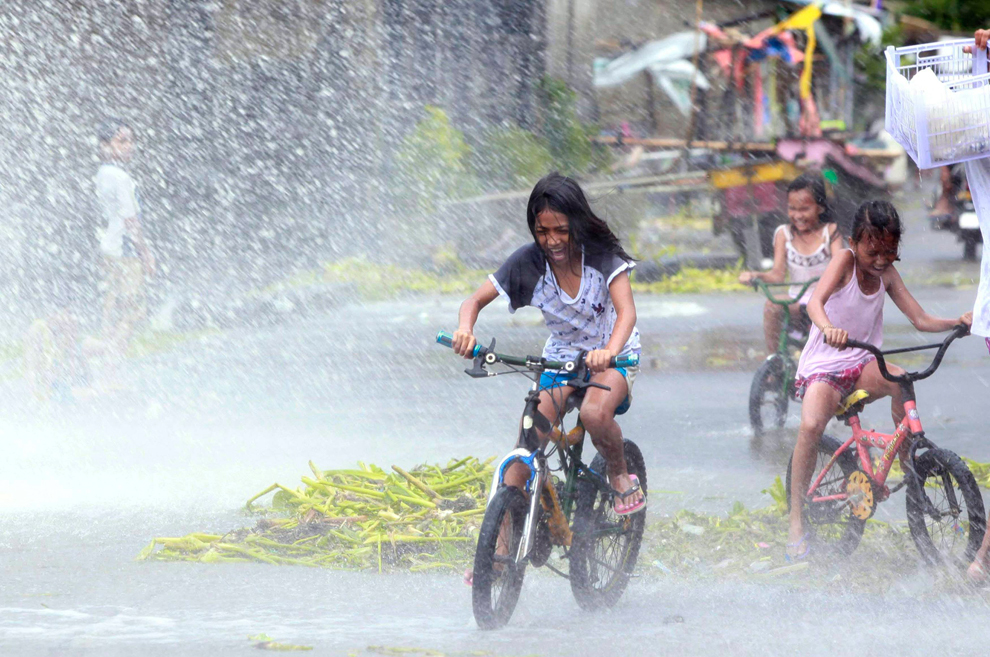 16
Girls ride on bicycles as they are splashed with water from strong waves in a coastal village as Typhoon Haiyan battered Bayog town in Los Banos, Laguna, south of Manila on Nov. 8. (Charlie Saceda/Reuters) # 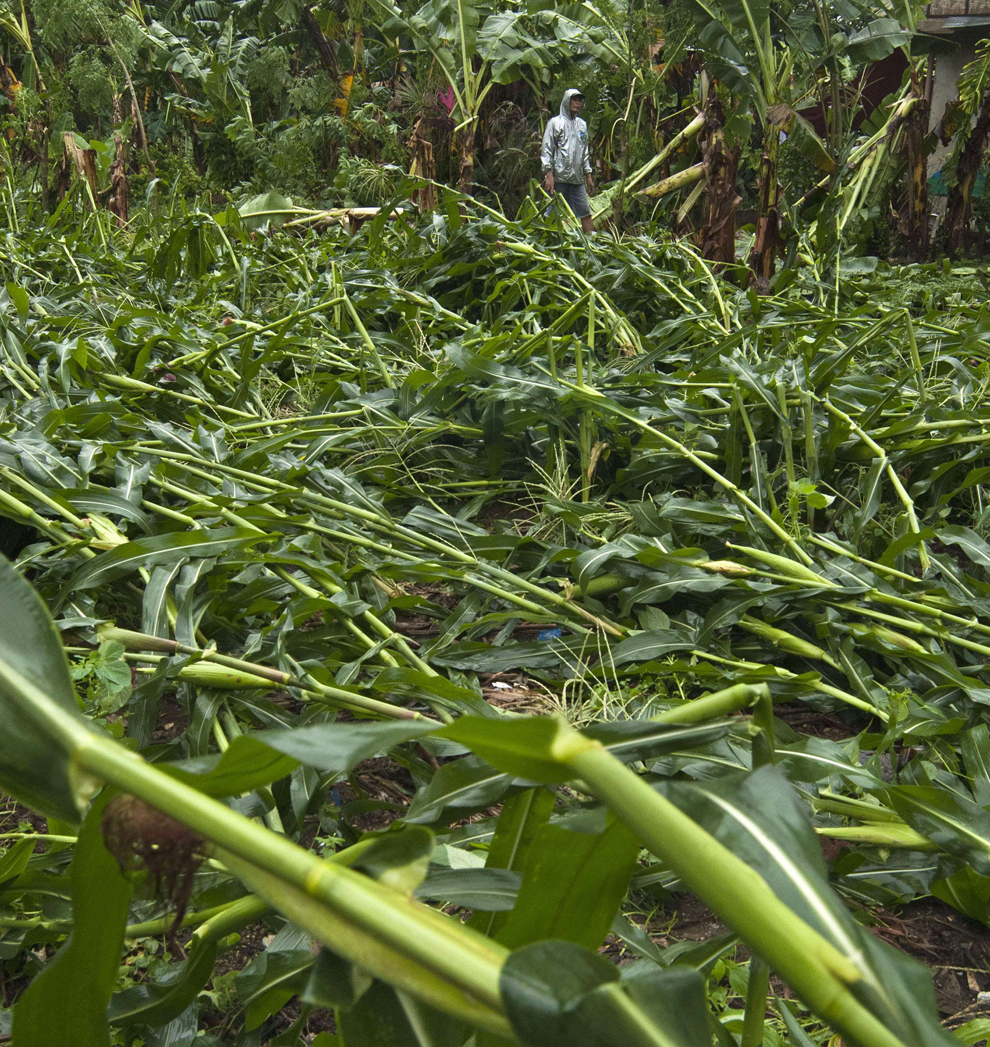 17
A farmer inspects his cornfields that was damage by the passing of Super Typhoon Haiyan into coastal communities on the central island of Cebu on Nov. 8. One of the most intense typhoons on record whipped the Philippines, killing three people and terrifying millions as monster winds tore roofs off buildings and giant waves washed away flimsy homes. (STR/AFP/Getty Images) # 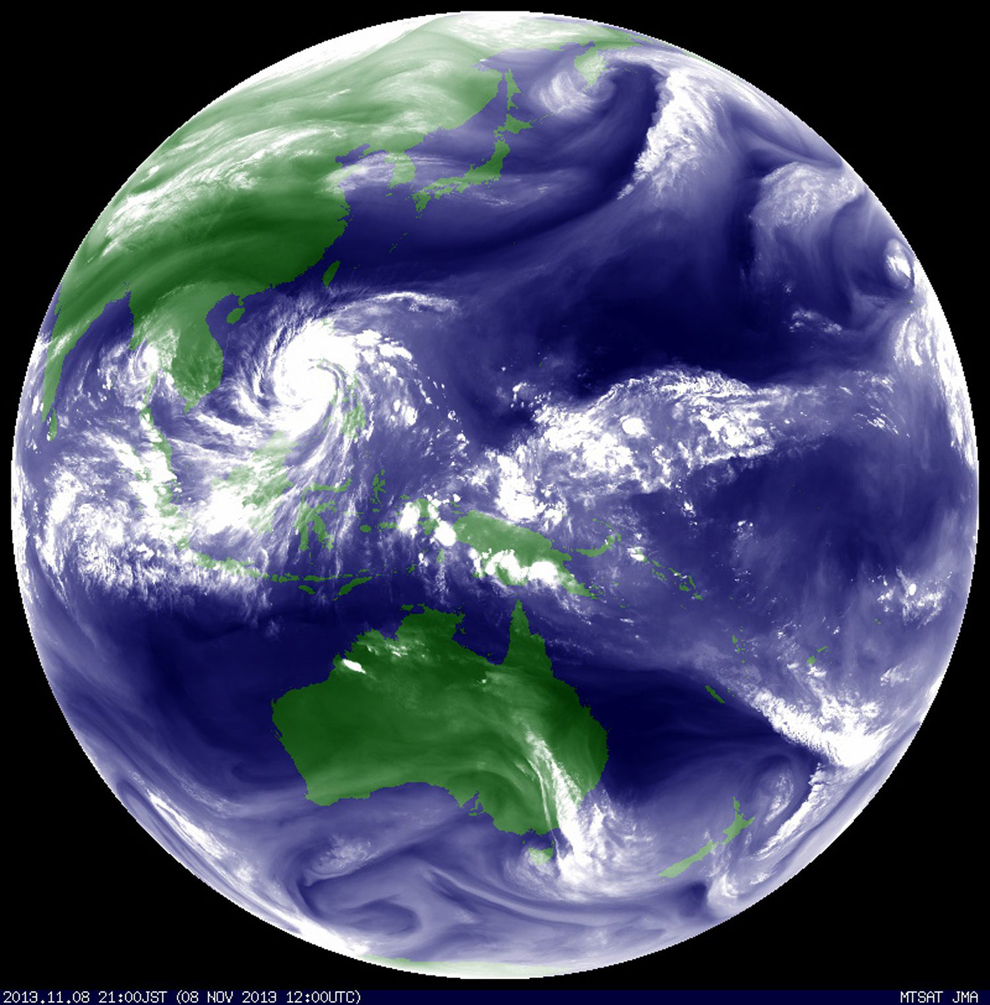 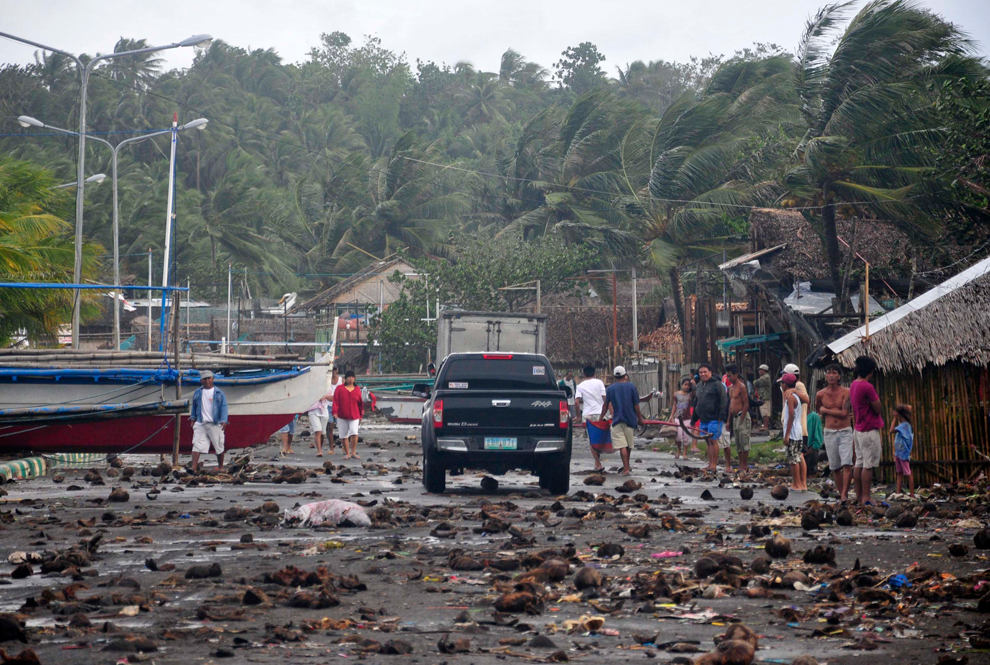 19
Debris litter the road by the coastal village in Legazpi city following a storm surge brought about by powerful Typhoon Haiyan in Albay province on Nov. 8, south of Manila, Philippines. (Nelson Salting/Associated Press) #