One year after Superstorm Sandy: A mixed recovery

One year after Superstorm Sandy ravaged the coasts of New York and New Jersey, the recovery has been mixed. Some residents have rebuilt and others are participating in a buyback program instituted by New York Governor Andrew Cuomo to return some neighborhoods to nature. At least 286 people were killed by the storm, which made landfall on October 29, 2012. -- Thea Breite ( 19 photos ) 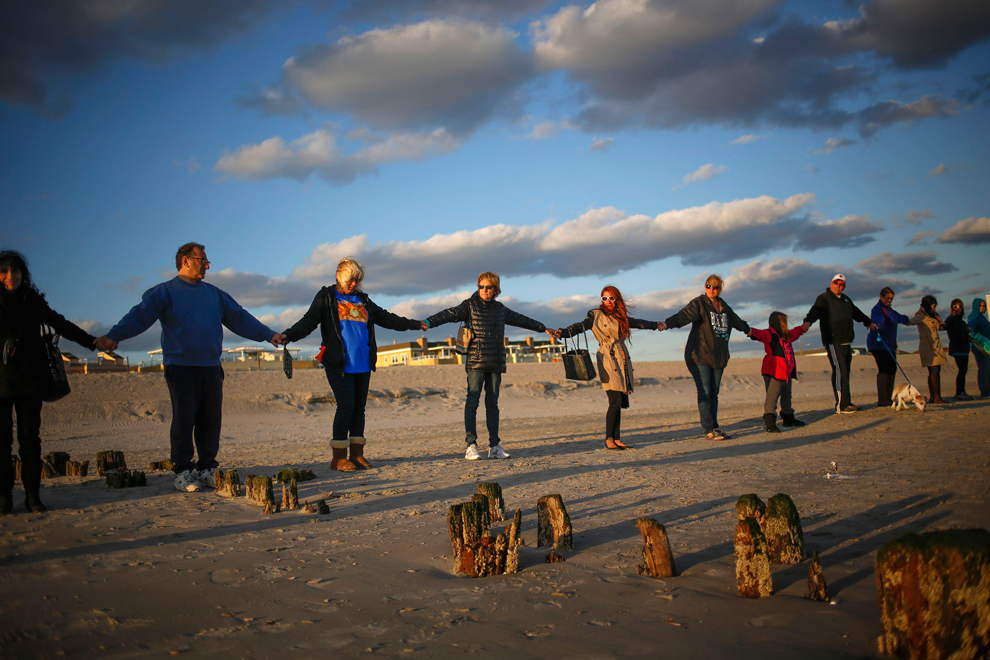 People hold hands during a remembrance ceremony along the beachfront damaged by hurricane Sandy in October 2012 in the Rockaways section of the borough of Queens in New York October 27, 2013. Local residents gathered to observe a moment of silence two days before the one year anniversary of the storm. (Shannon Stapleton/Reuters) 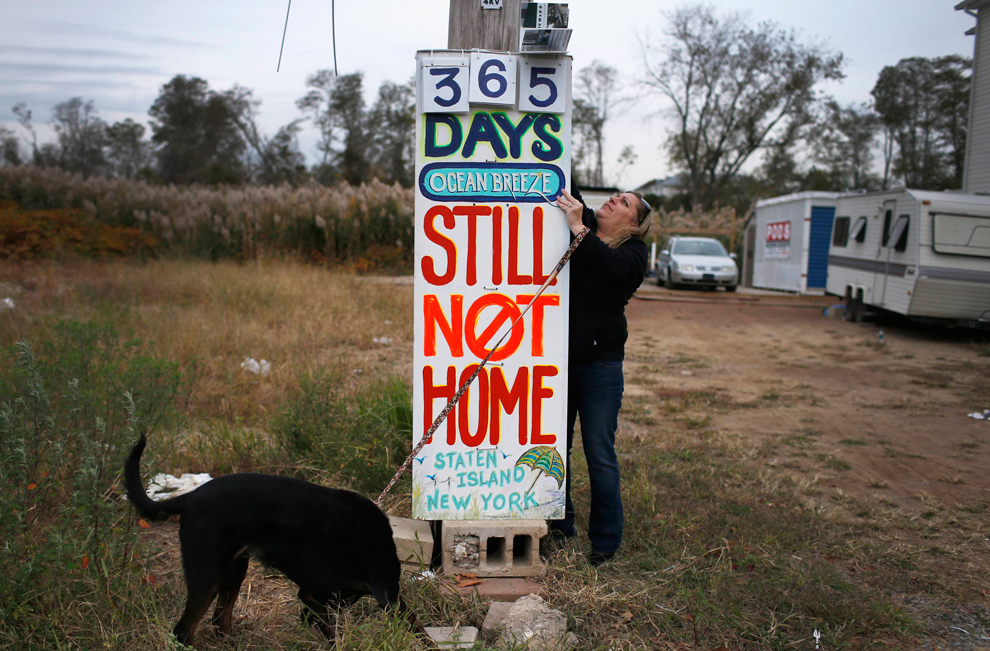 2
Jean Laurie changes the numbers on a sign she erected across the road from where her house once stood before being destroyed by Superstorm Sandy in October of 2012 in the Ocean Breeze section of Staten Island in New York City, October 23, 2013. Many on the low lying south shore of Staten island continue to struggle to recover from the hurricane which destroyed hundreds of homes on the island with just days until the one year anniversary of the October 29, 2013 storm (Mike Segar/REUTERS) # 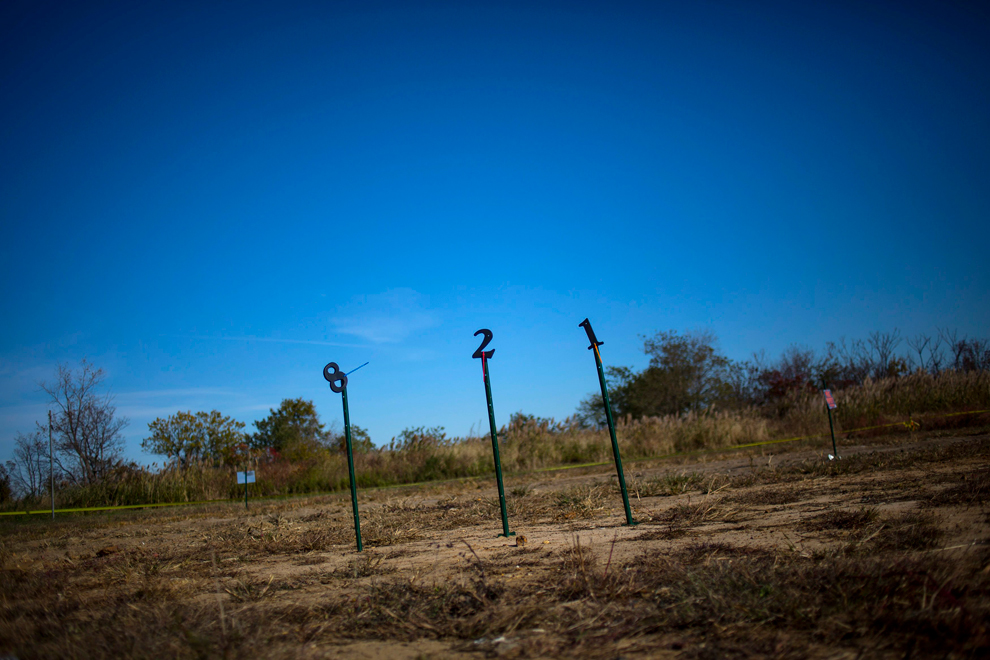 3
Numbers representing the address of a home destroyed by Superstorm Sandy in October 2012 are seen in Union Beach, New Jersey October 27, 2013. Progress is seen in some areas along the beachfront while others remain damaged, two days before the one year anniversary of the storm. (Eric Thayer/REUTERS) # 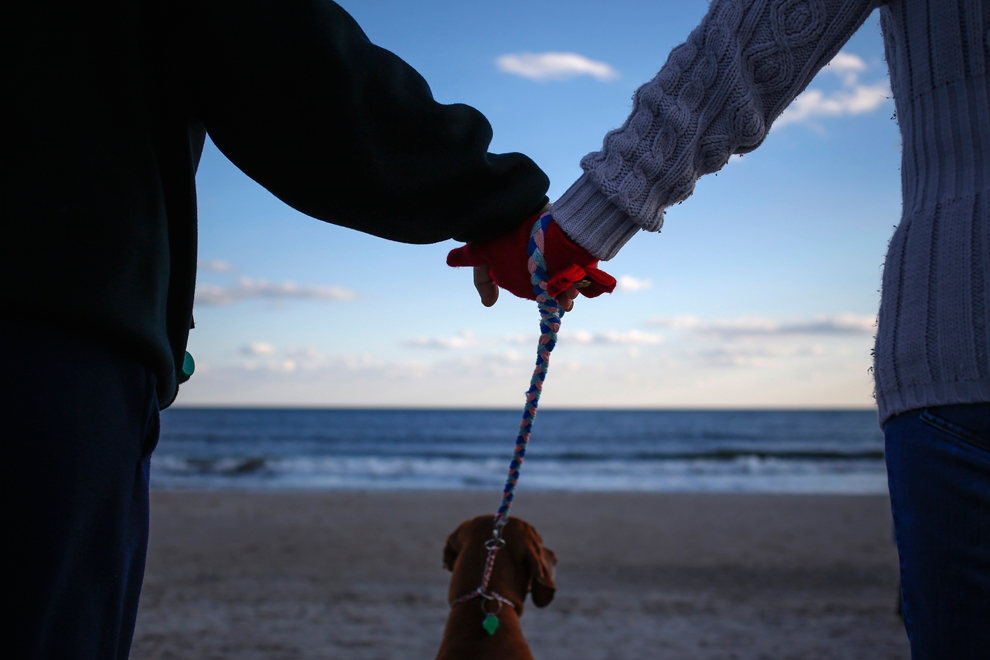 4
At the remembrance ceremony in the Rockaways in New York October 27, 2013, local residents held hands on the beach. (Shannon Stapleton/Reuters) # 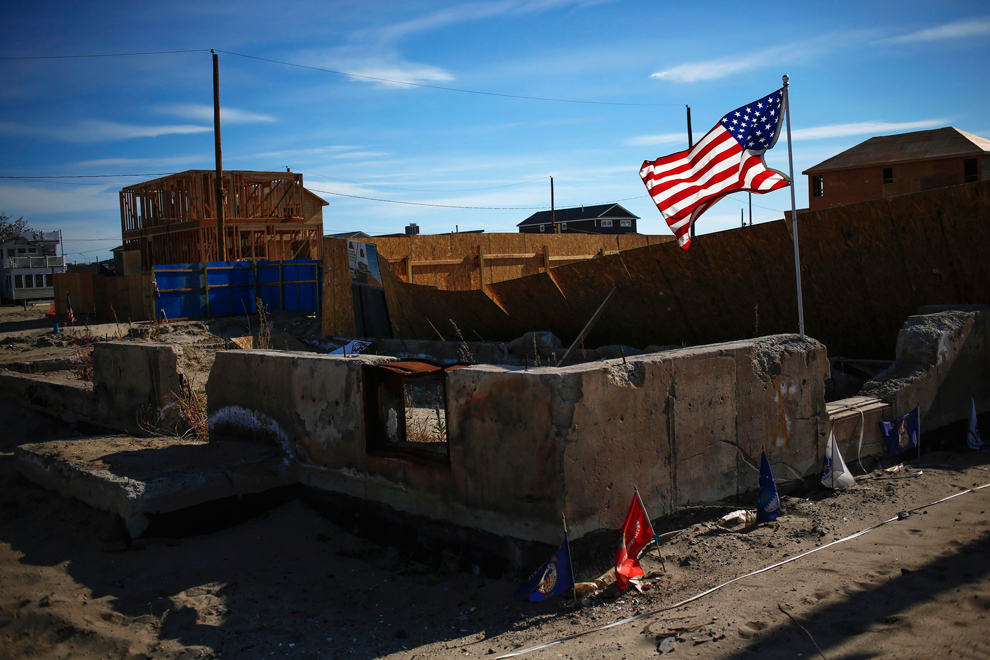 5
Many sites that have not been rebuilt display the American flag. (Shannon Stapleton/REUTERS) #

6
Jean and Burt Laurie stand on the lot where their house once stood before being destroyed by Superstorm Sandy in October 2012 in the Ocean Breeze section of Staten Island in New York City, October 23, 2013. (Mike Segar/REUTERS) # 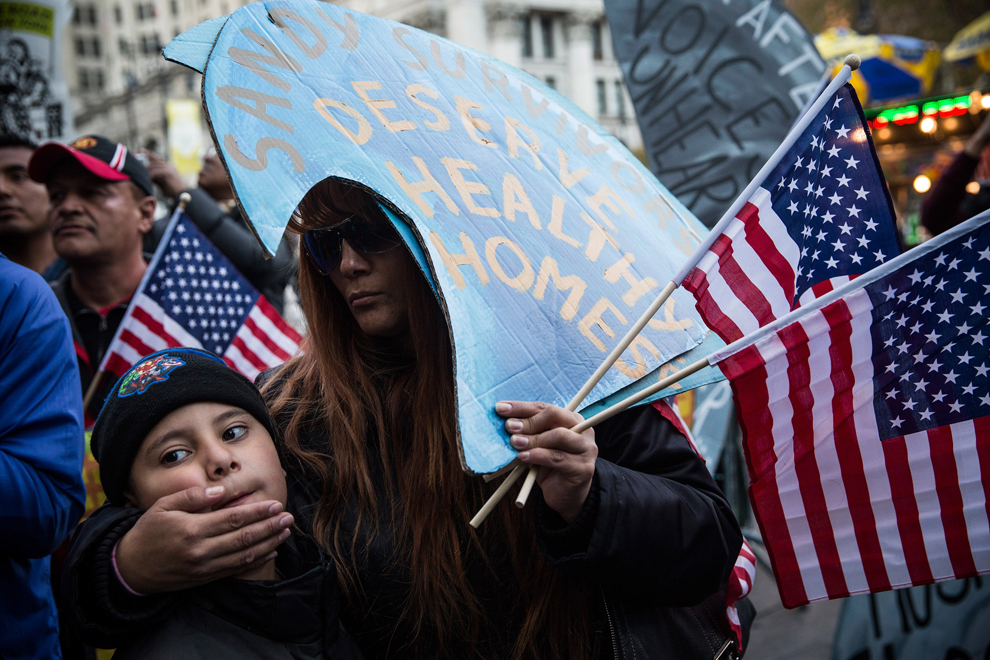 7
Protesters affected by Superstorm Sandy attend a rally outside City Hall in New York, calling for more to be done by government regarding the rebuilding process, affordable housing and better job opportunities on October 27, 2013 in New York City. (credit) # 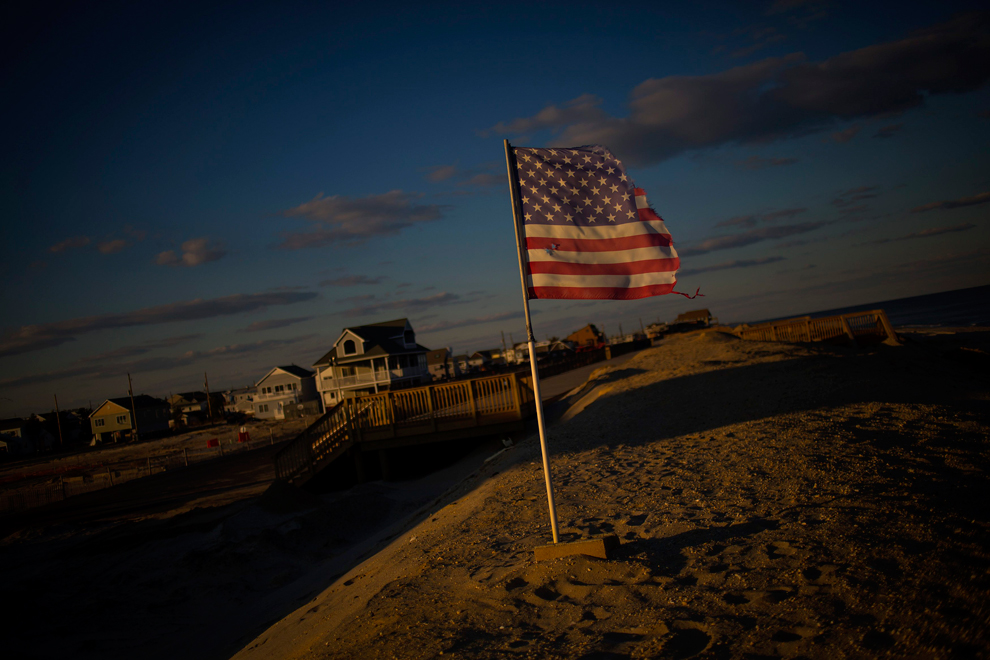 8
Ortley Beach, New Jersey on October 27, 2013, where homes were destroyed by the storm. Progress is being made in areas along the beachfront area while others remain untouched with just days until the one year anniversary of the storm. (Eric Thayer/REUTERS) # 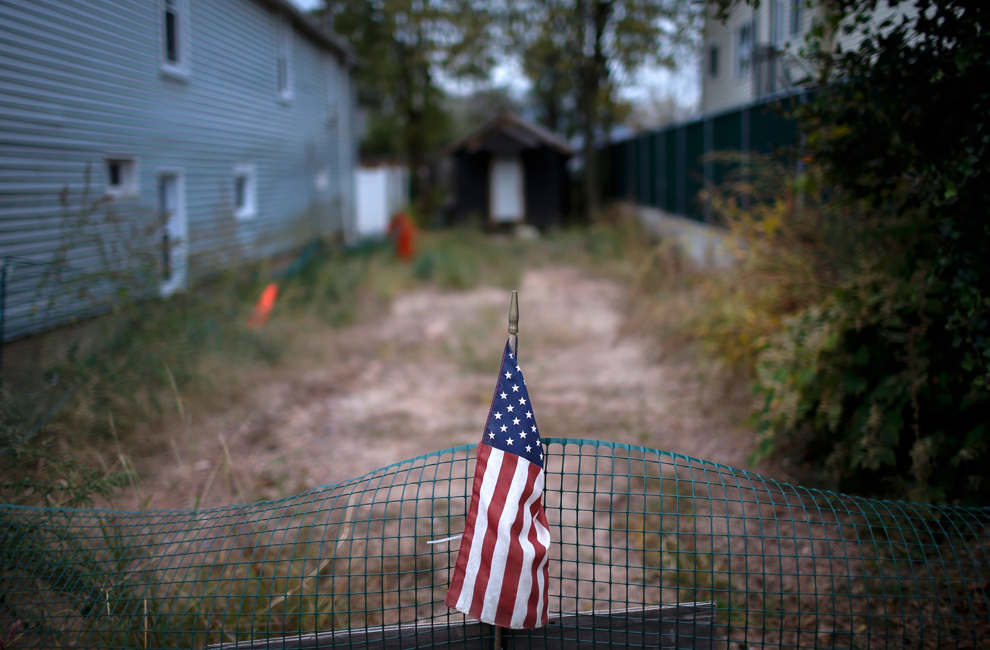 9
A U.S. flag hangs on a piece of fencing where a house once stood in the Oakwood Beach section of Staten Island in New York City October 23, 2013. New York State Governor Andrew Cuomo, who has said that area should be returned to nature, initiated a voluntary $400 million buyback program for some 418 homes in the low-lying neighborhood situated between salt marshes and the Atlantic Ocean that was devastated by surging floodwaters in the historic October 29, 2012 Superstorm. As the one year anniversary of the storm approaches and as demolition begins, homes in Oakwood beach now lay mostly vacant and abandoned as the modest ocean-side neighborhood which now resembles a ghost town is set to all but disappear. (Mike Segar/REUTERS) # 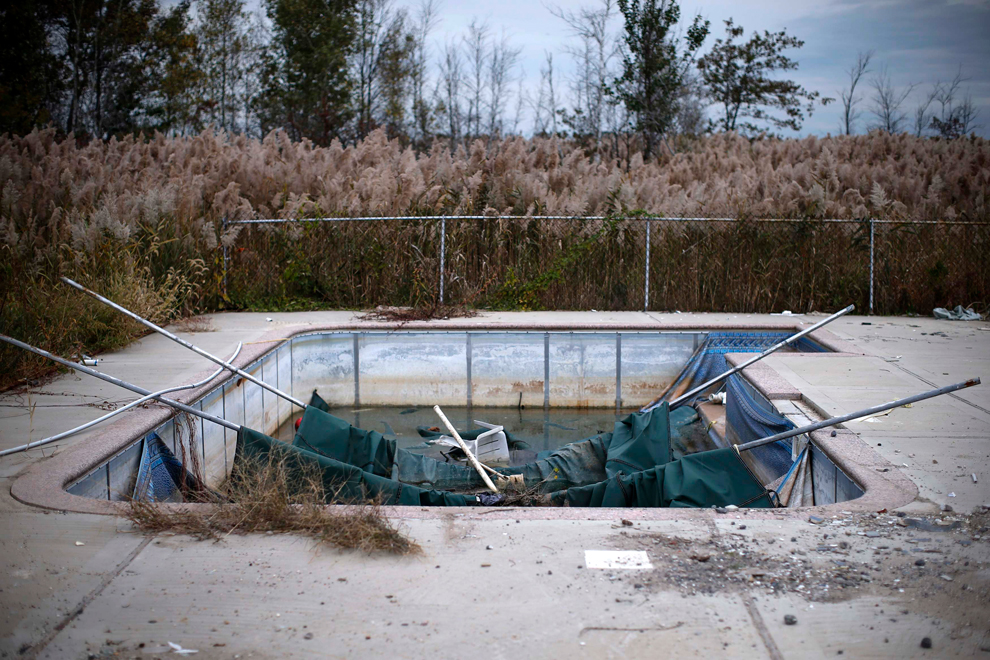 10
The remains of a swimming pool sits next to where a home destroyed by Superstorm Sandy once stood in the Oakwood Beach section of Staten Island in New York City October 23, 2013 (Mike Segar/REUTERS) # 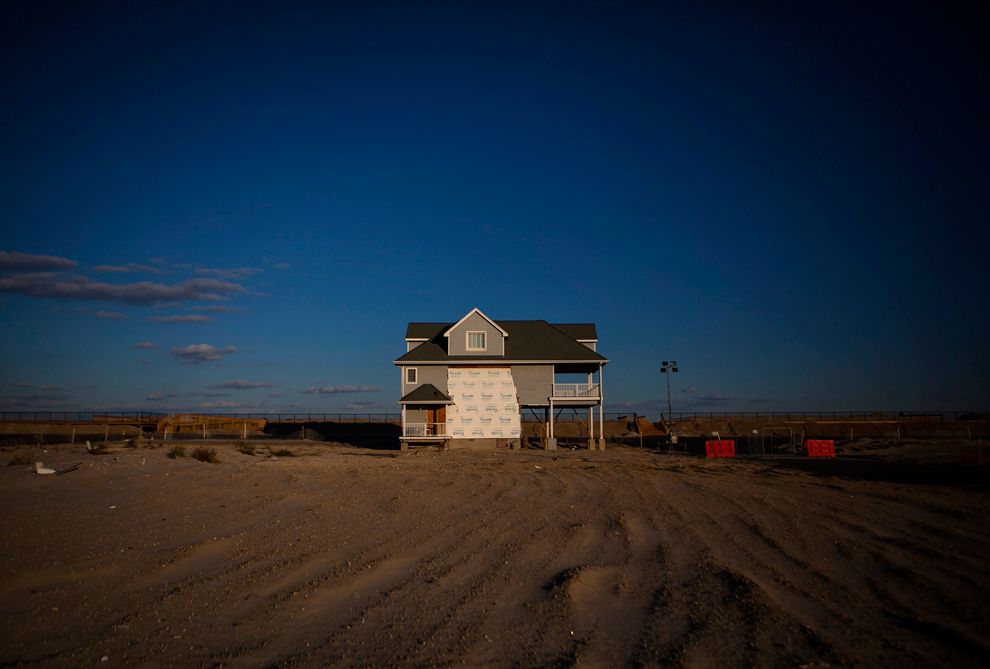 11
A home damaged by the storm is surrounded by empty lots in Ortley Beach, New Jersey October 27, 2013. (Eric Thayer/REUTERS) # 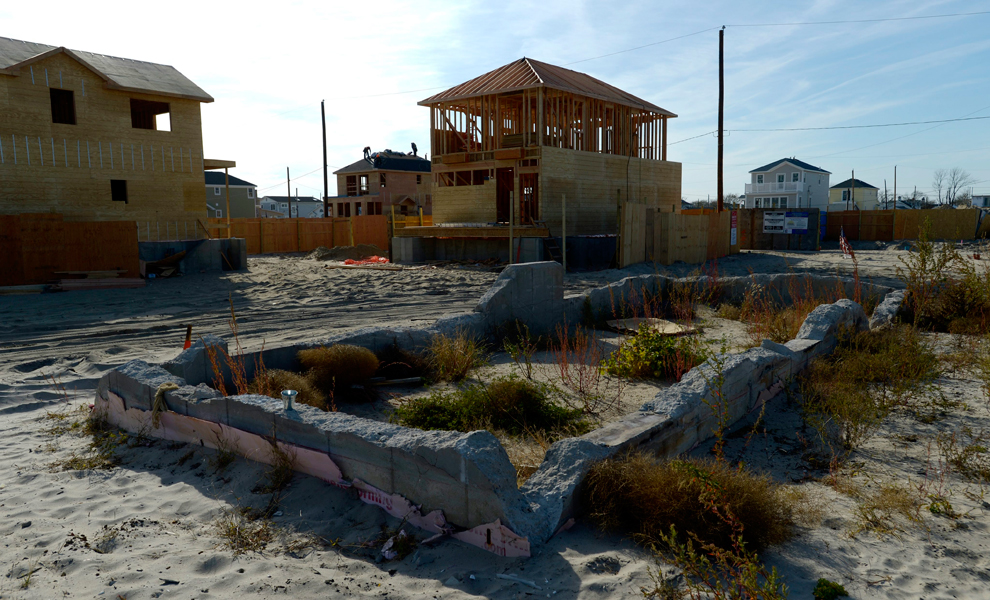 12
A home foundation in a neighborhood that was ravaged by fire during Superstorm Sandy in Breezy Point, New York. (Justin Lane/EPA) # 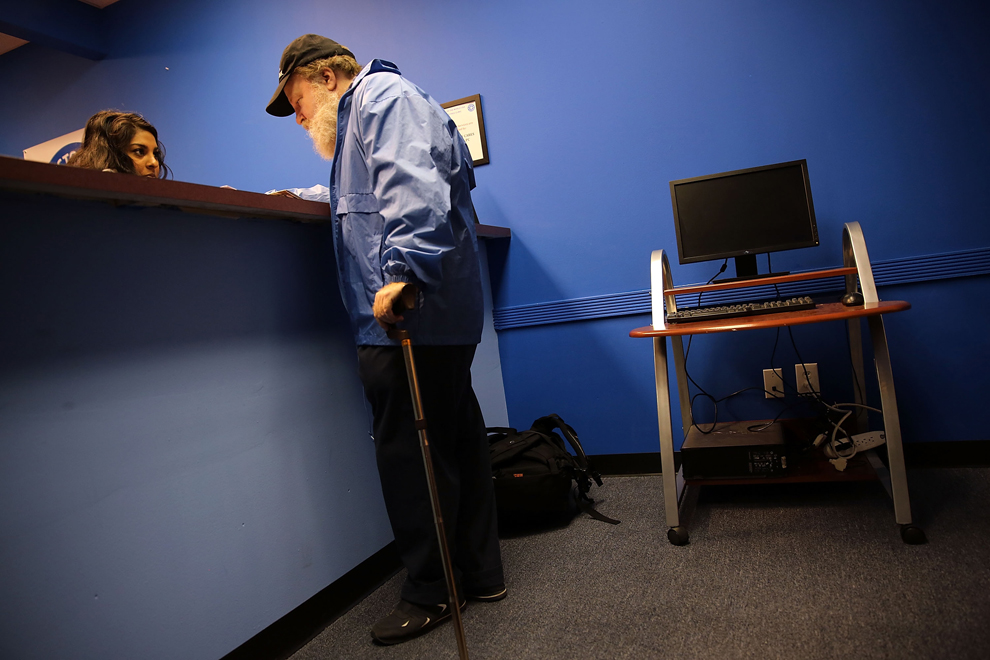 13
Doctors Of The World opened a free health clinic in Rockaway, Queens on October 19, 2013 in New York City. The non-profit organization decided to set up the free health clinic after seeing a need by local residents who are dealing with health issues and financial problems from the fallout of Superstorm Sandy. (Spencer Platt/GETTY IMAGES) # 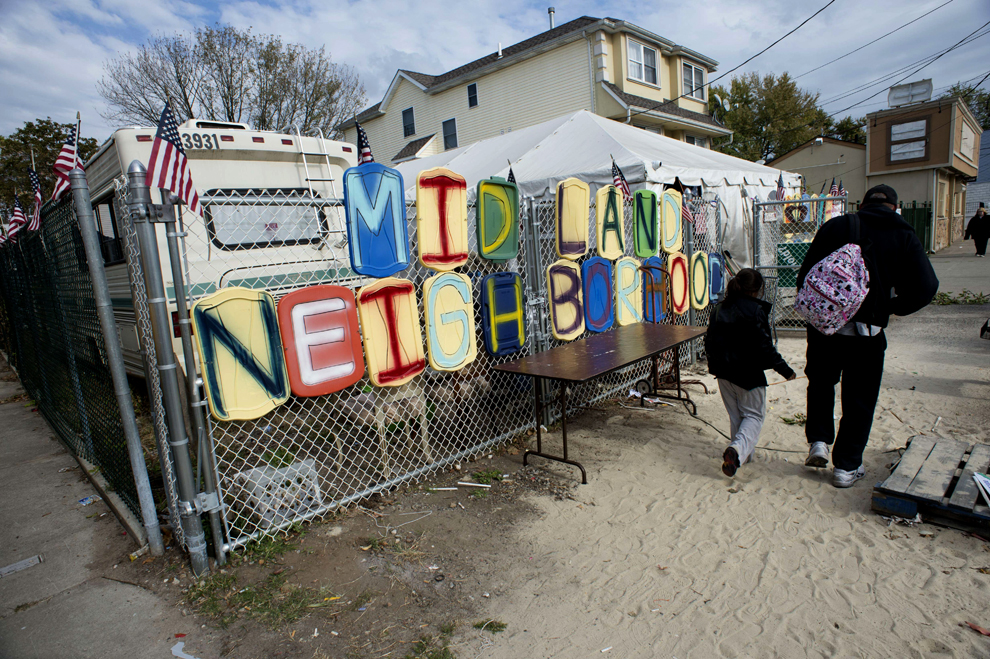 14
People walk past the Midland Avenue Relief Center October 23, 2013 in Staten Island, New York. The center takes donations in then redistributes them to those in need who are still suffering from the effects of Superstorm Sandy one year later. (Don Emmert/AFP/GETTY) # 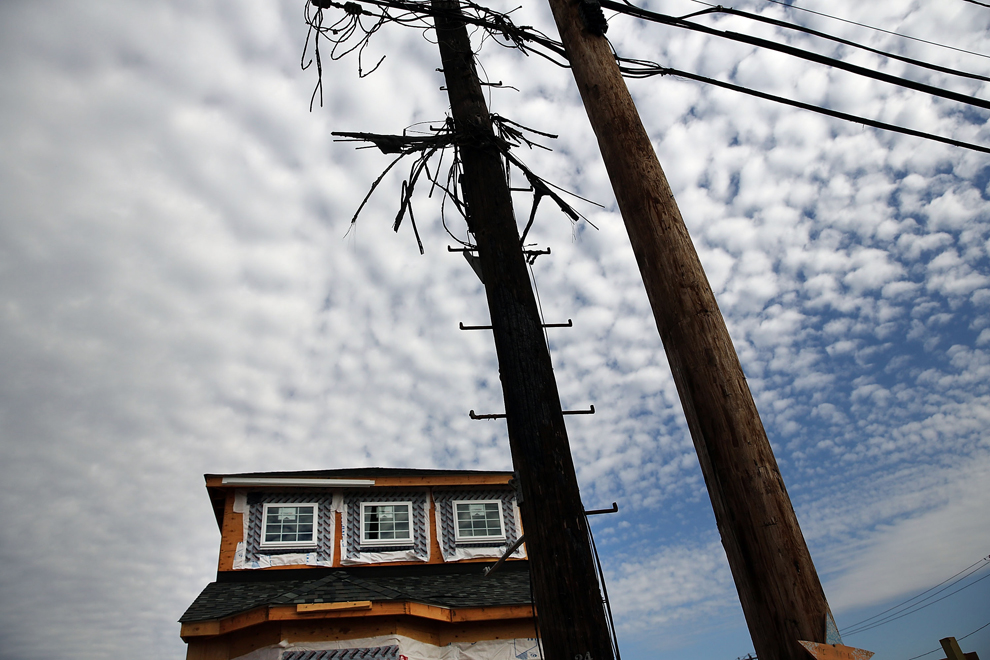 15
A charred pole stands near a new home constructed in an area that was heavily damaged by fire in Hurricane Sandy on October 22, 2012 in the Breezy Point neighborhood of the Queens borough of New York City. (Spencer Platt/GETTY IMAGES) # 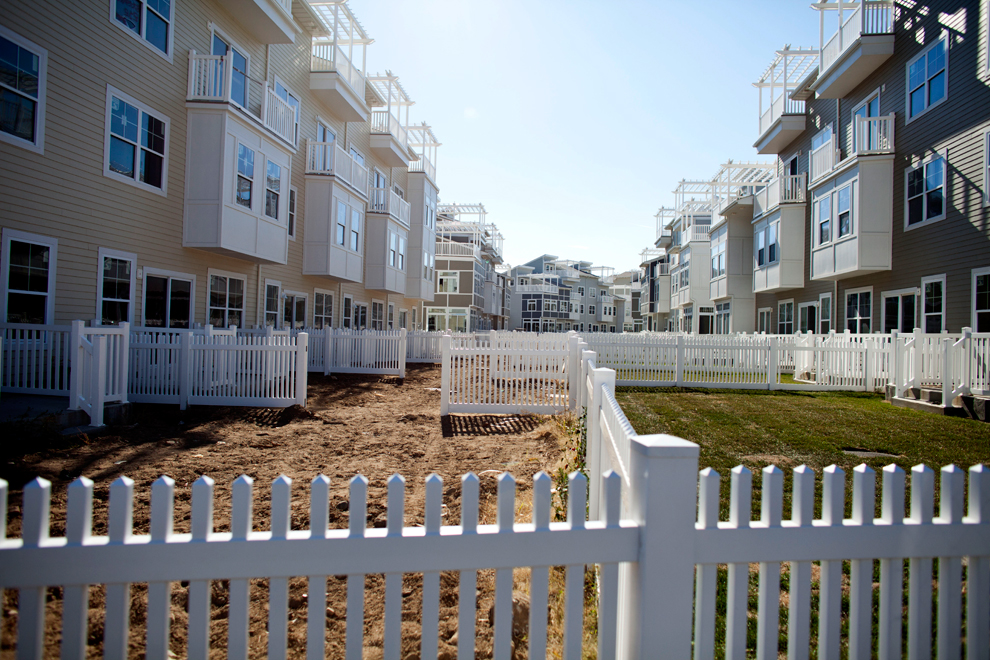 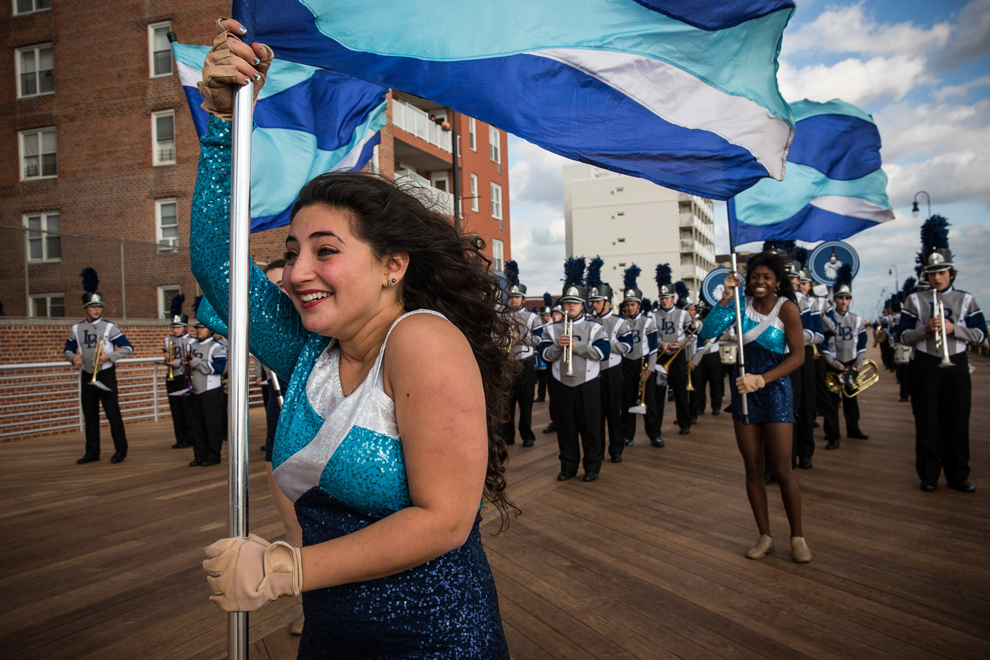 17
A member of the Long Beach High School color guard shivers in the wind before marching down the Long Beach boardwalk during a ceremony to officially reopen the boardwalk on October 25, 2013 in Long Beach, New York. The boardwalk was severely damaged by Superstorm Sandy last year. The new boardwalk is made of Brazilian hardwood and is estimated to have a lifespan of 30-40 years; the previous boardwalk was only scheduled to last three to seven years. (Andrew Burton/GETTY IMAGES) # 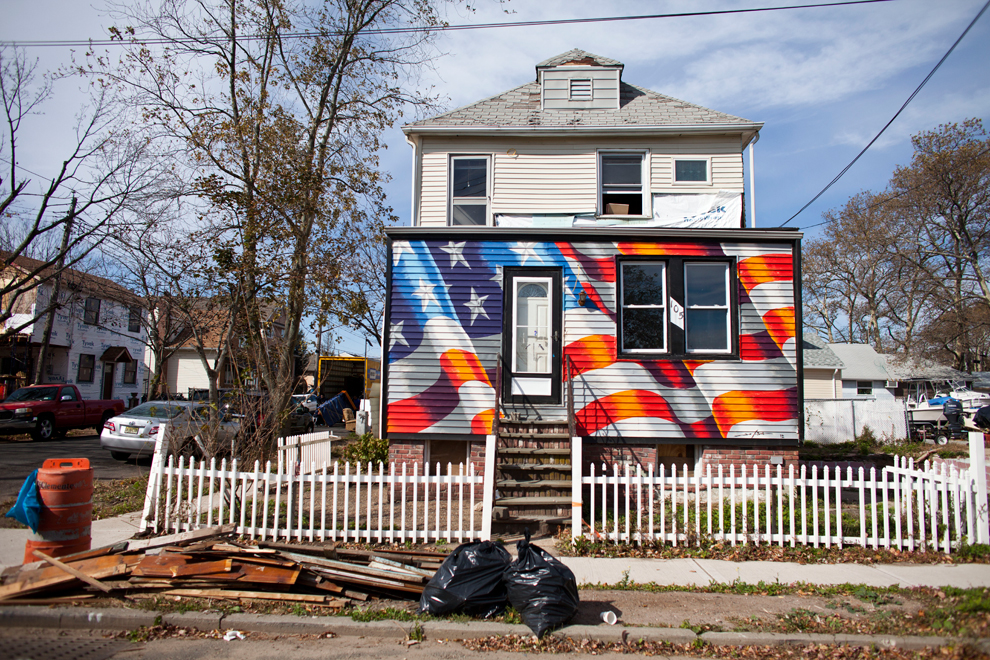 18
An American flag is painted on a house damaged during Superstorm Sandy on October 27, 2013 in Staten Island. (Ramin Talaie/GETTY IMAGES) # 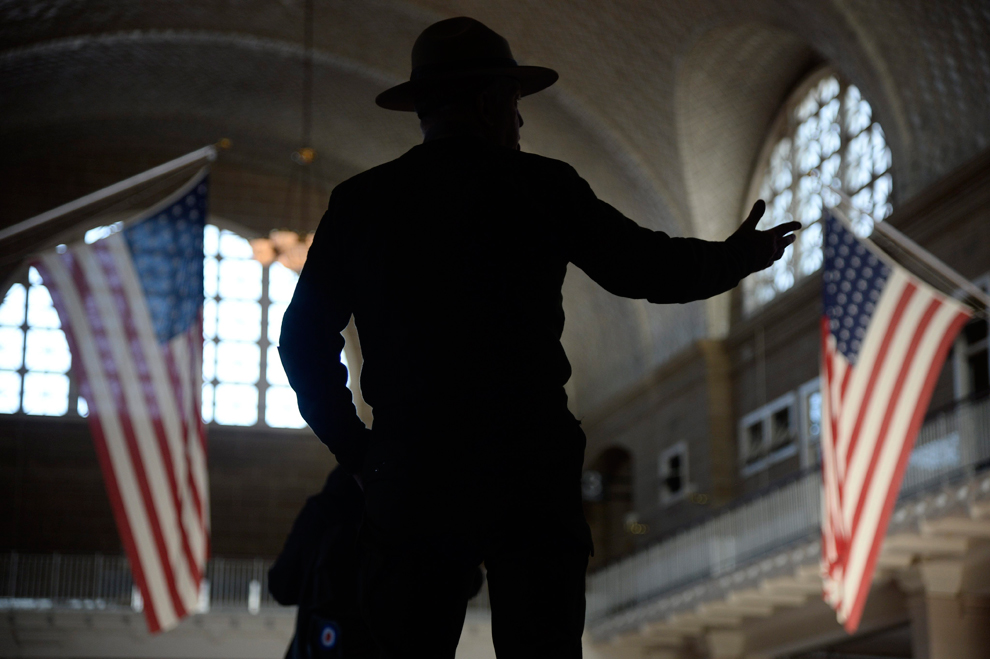 19
A Park Ranger stands in The Great Hall on Ellis Island in New York, in New York, New York, USA, 28 October 2013. Ellis Island was the entry point for millions of immigrants to the United States, and since 1992 has been a museum on US immigration. It reopened on 28 October, one year it was damaged after Superstorm Sandy. (Andrew Gombert/EPA) #

More links and information
Stories from New York Times readers - NYTimes.com, 10/28
Times Documentaries -- Coming Back: A Year of Recovery - NYTimes.com, 10/27
Self portraits by communities in distress - Time.com, 10/24
< Back to front page
RECENT ENTRIES