One of the most desperately poor, war-torn nations on earth, Afghanistan attracts our attention mostly for the wrong reasons. Well over 30 percent of the population lives in absolute poverty, with as many clinging to their places just barely above the poverty line. While Afghanistan is the world's leader in opium exports, domestic consumption afflicts almost a quarter of a million, with an additional 150,000 addicted to heroin, triple the number from 2005. Violence against women and girls continues. But rich cultural traditions abound, and Afghan society is making progress. Gathered here are images of the colorful yet troubled lives of Afghan civilians. -- Lane Turner (29 photos total) 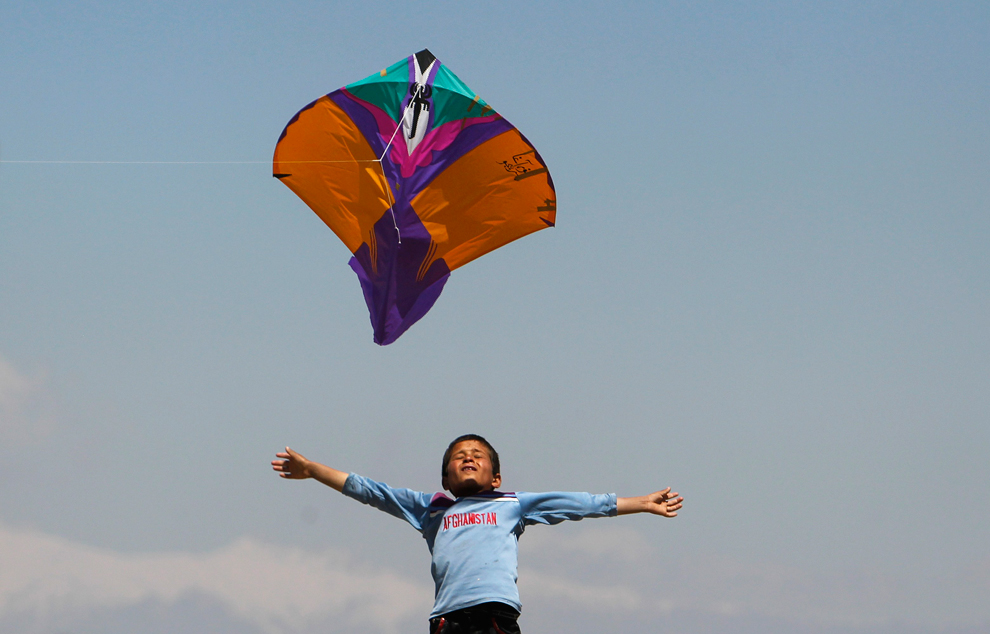 A boy tries to catch a falling kite on a hilltop in Kabul on April 28, 2013. (Omar Sobhani/Reuters) 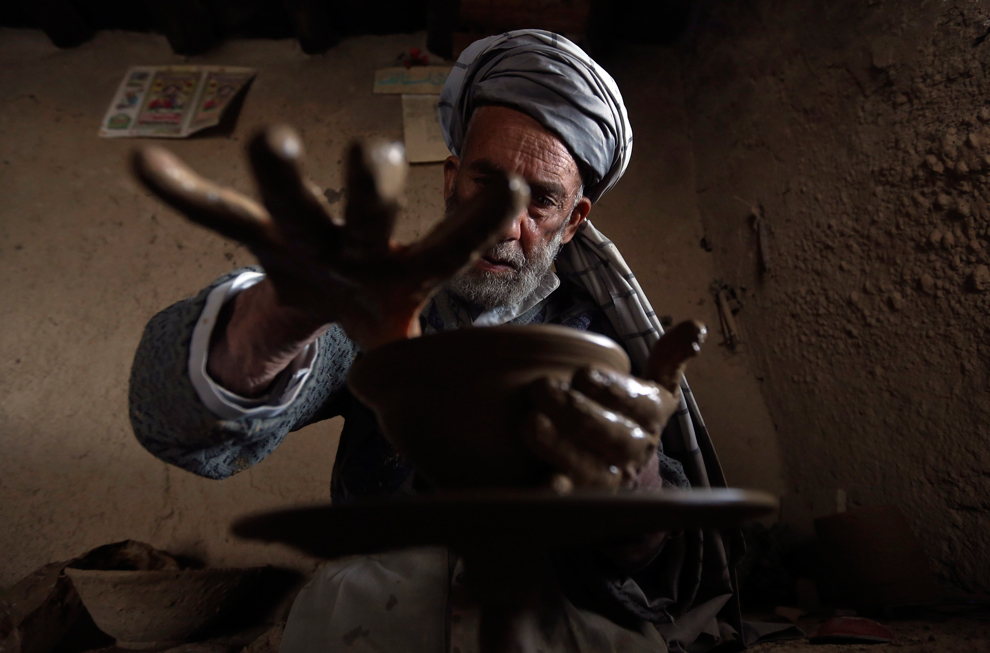 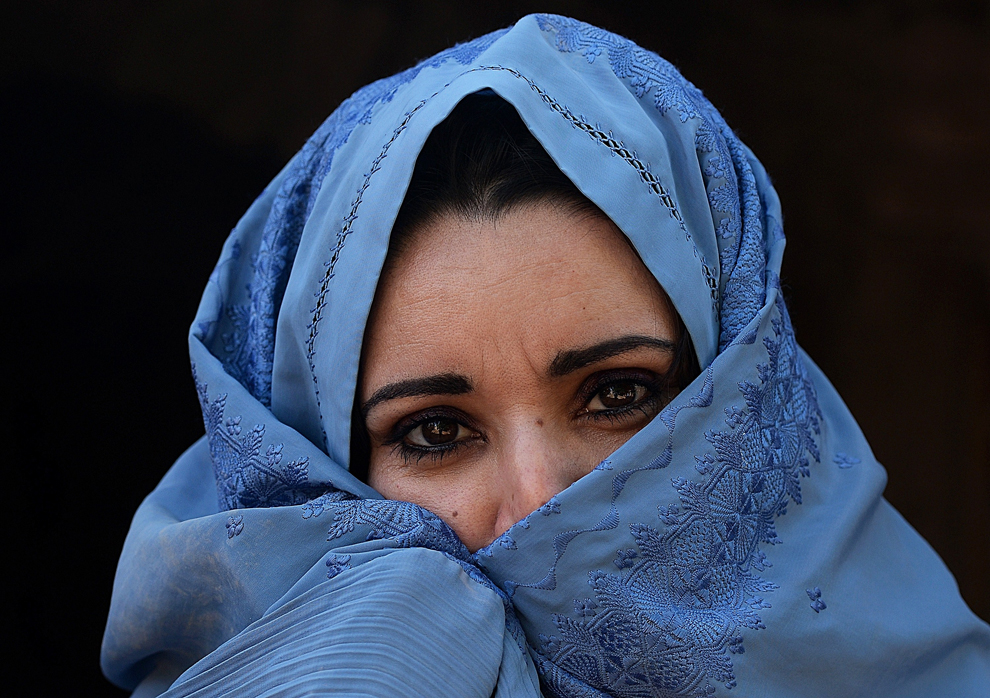 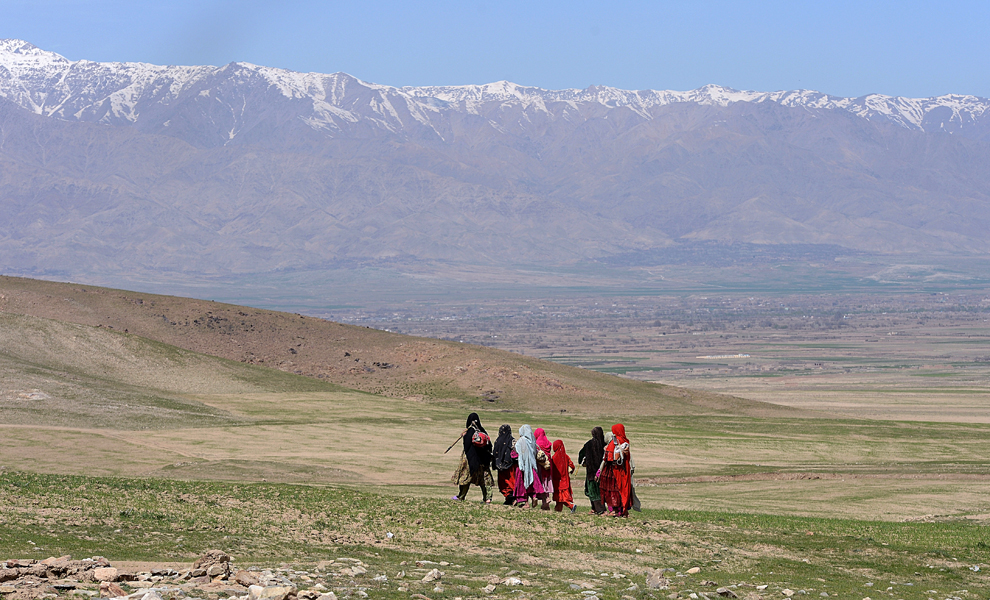 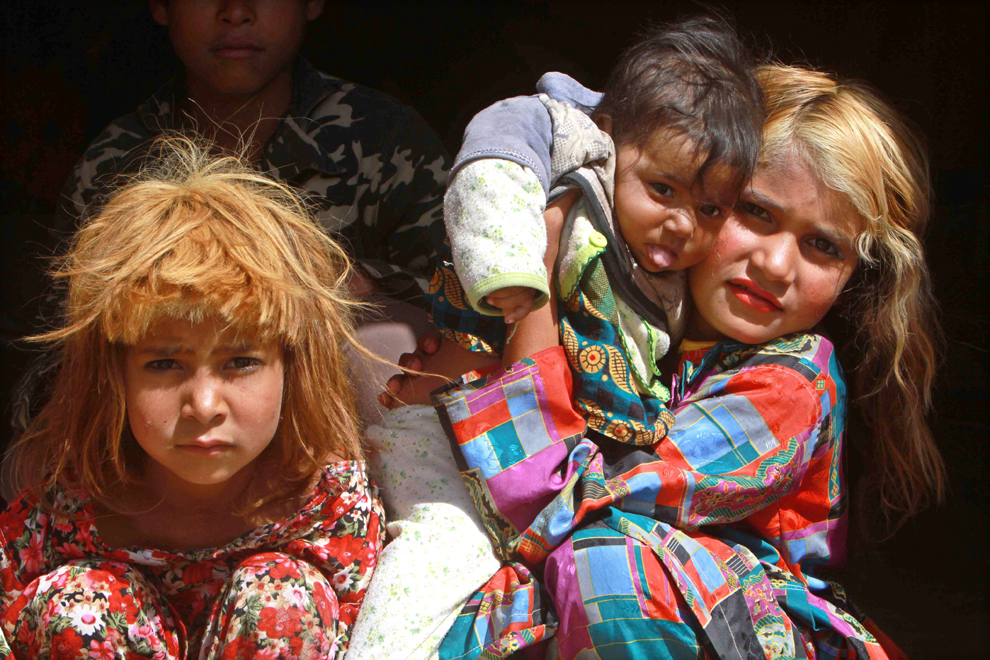 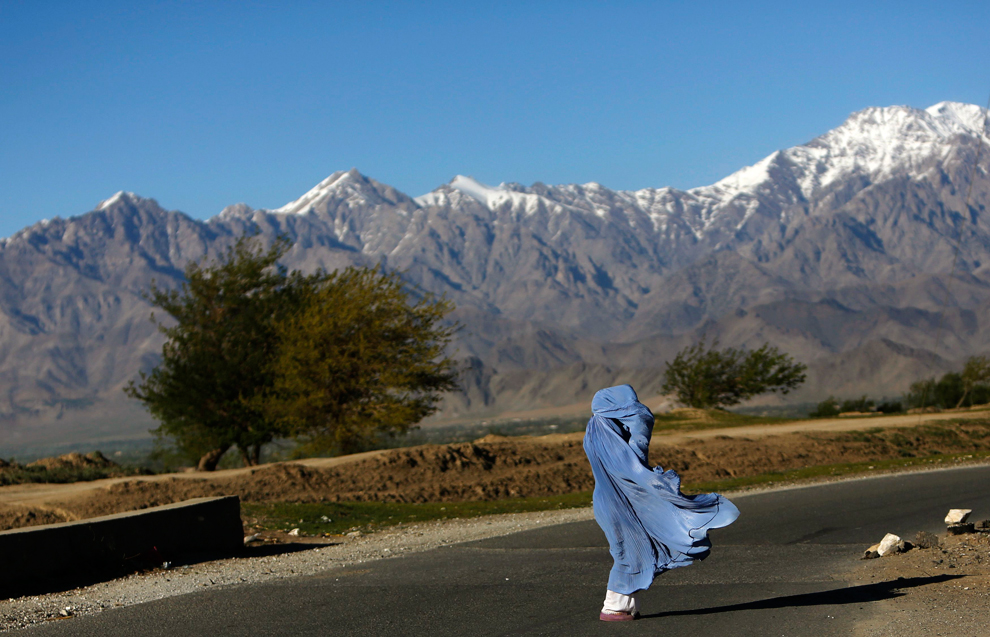 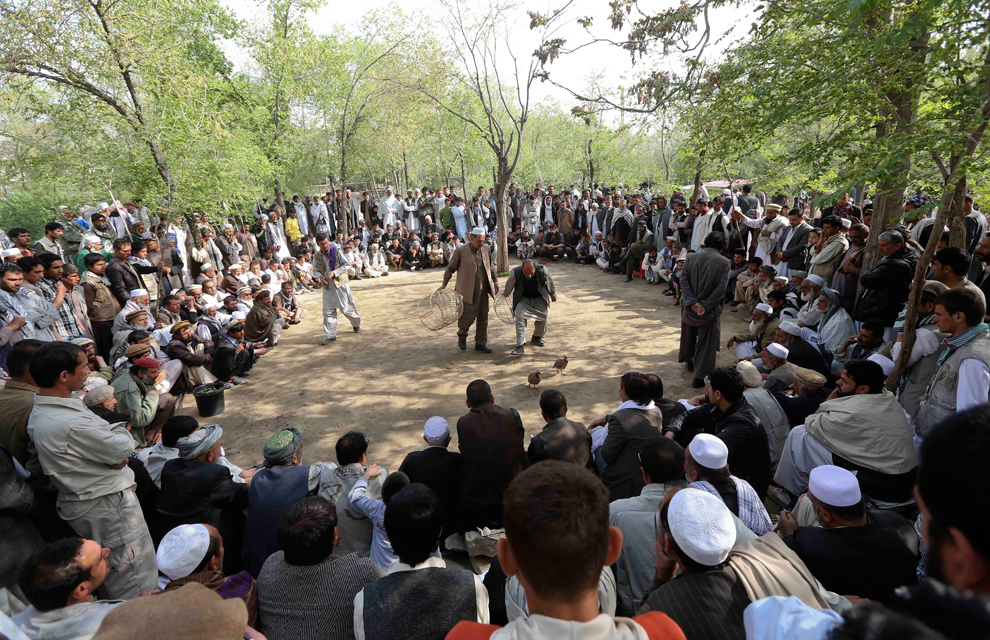 7
Men watch partridges fight during a competition at a local park in Kabul on April 19, 2013. Bird-fighting is a hobby in Afghanistan and although gambling remains illegal in the country, betting on such fights is tolerated. (Omar Sobhani/Reuters) # 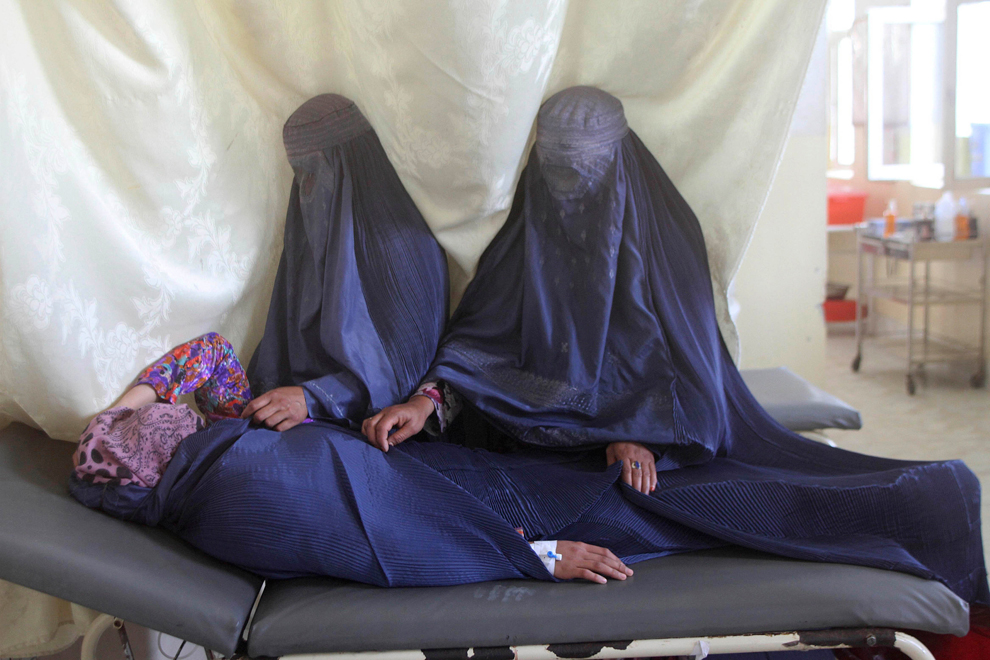 8
Schoolgirls who fell ill after smelling gas at their school receive treatment at a hospital in Takhar province on April 21, 2013. As many as 74 girls fell sick after possible poisoning. There have been numerous substantiated cases of mass poisonings of schoolgirls by elements of Afghanistan's ultra-conservative society that are opposed to female education. (Stringer/Reuters) # 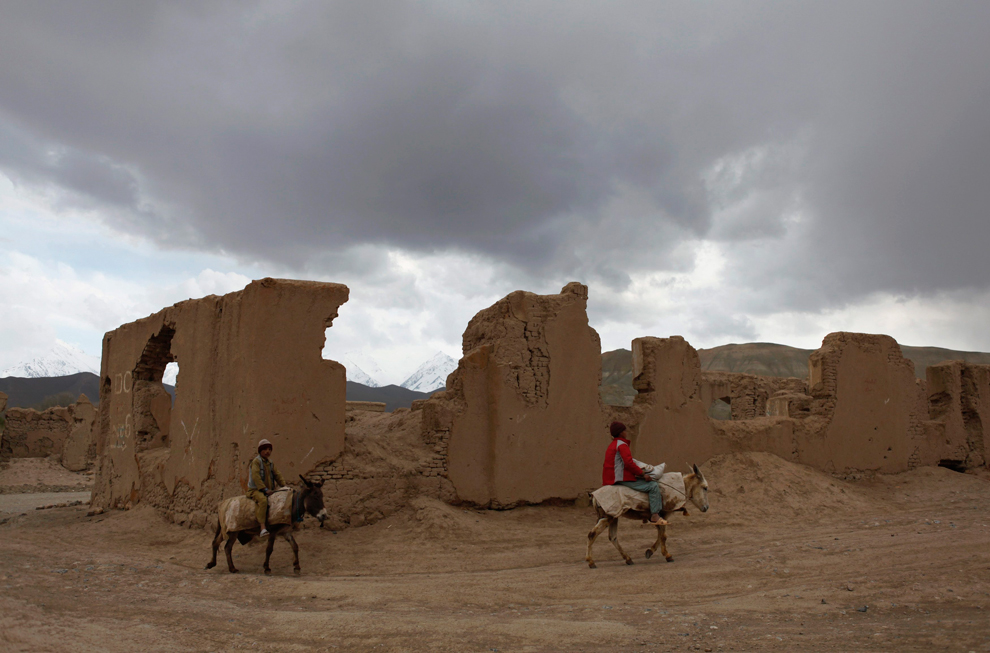 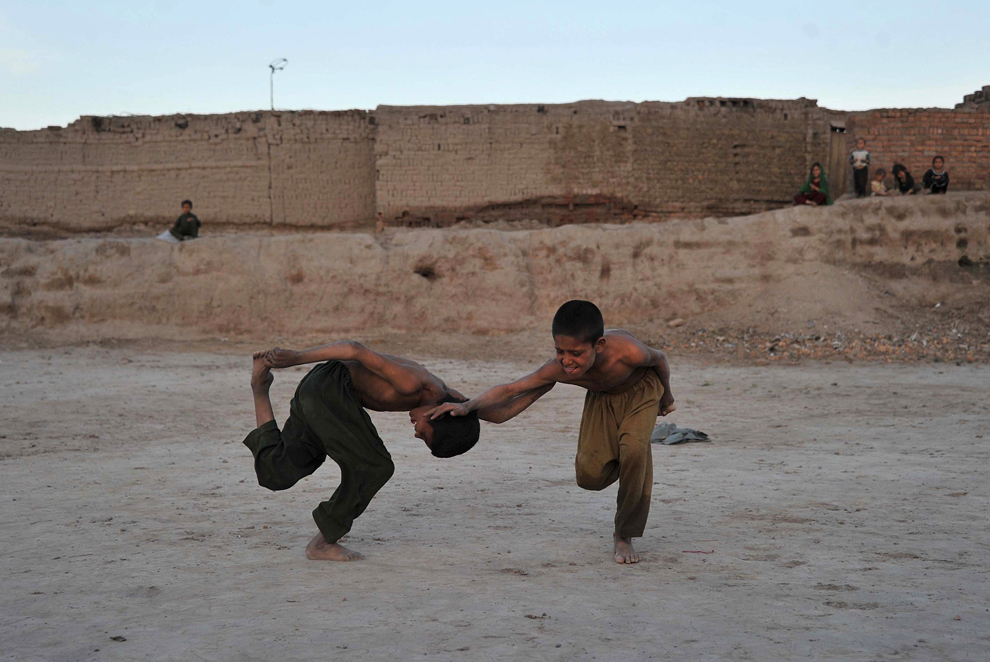 10
Children play Ghursai, a traditional boy's game, in Jalalabad on April 1, 2013. Children hold one foot in one hand and then try to knock down their opponent. (Noorullah Shirzada/AFP/Getty Images) # 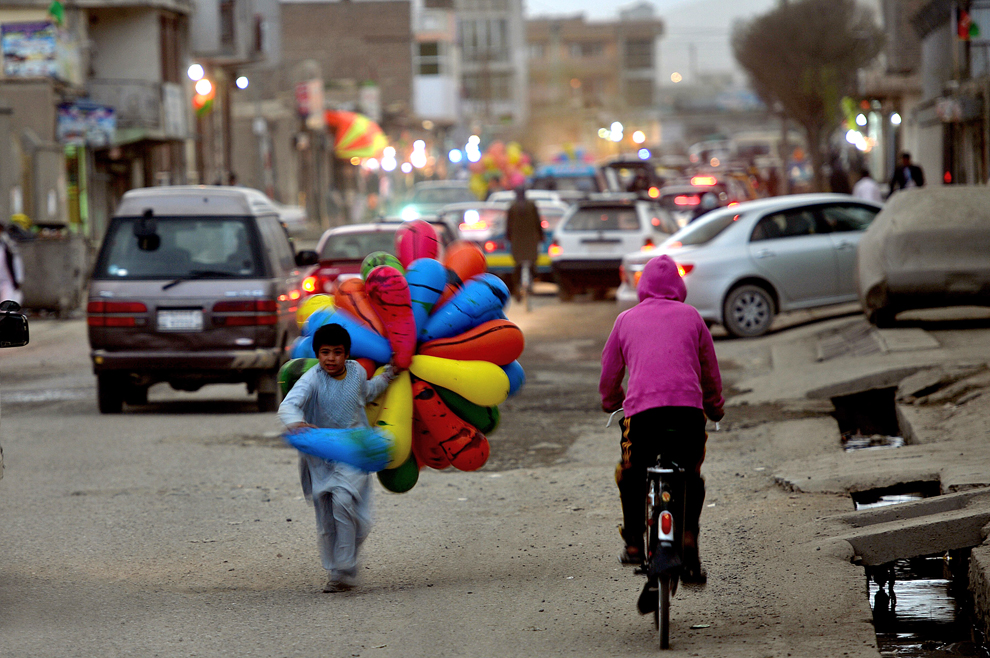 11
A young Afghan balloon seller runs towards a customer on a street in Kabul on April 2, 2013. (Massoud Hossaini/AFP/Getty Images) # 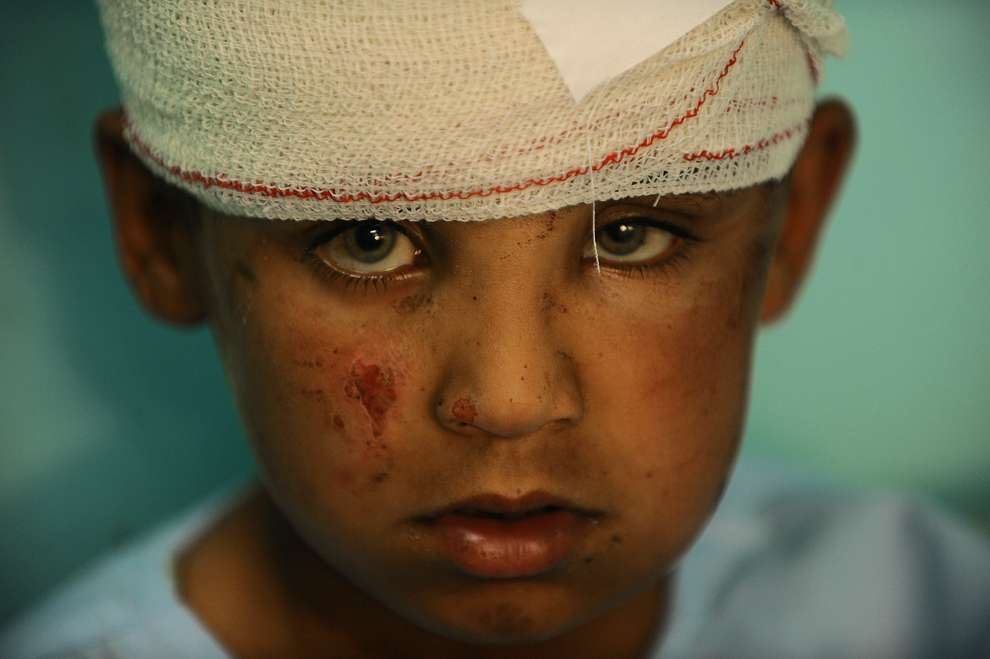 12
A wounded boy receives treatment at a hospital after a Taliban attack in Farah province on April 4, 2013. (Aref Karimi/AFP/Getty Images) # 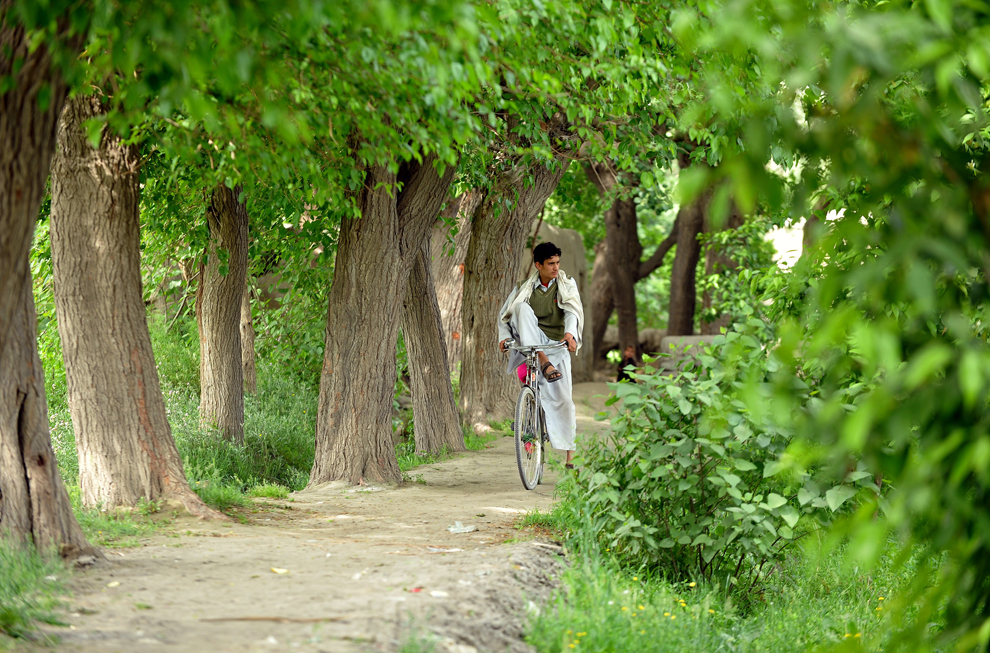 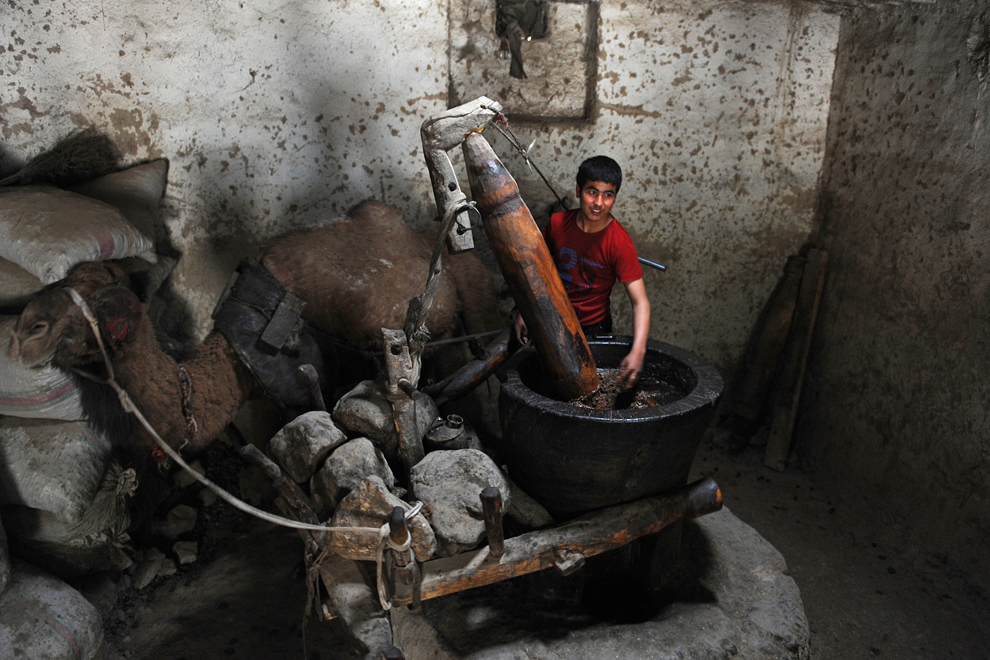 14
A worker extracts vegetable oil with the help of a camel using traditional methods in the Nahr-i Shahi district of Balkh province on April 8, 2013. (Farshad Usyan/AFP/Getty Images) # 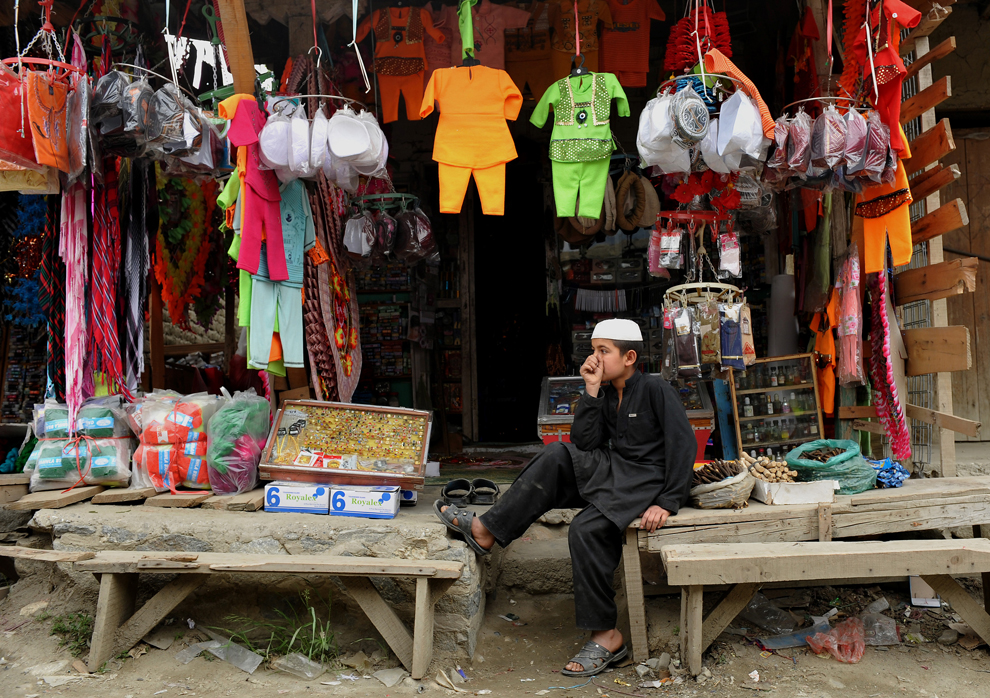 15
A boy waits in his garment shop in Wazir Bazaar in Khagyani Disrict in the province of Nangarhar on April 8, 2013. (Manjunath Kiran/AFP/Getty Images) # 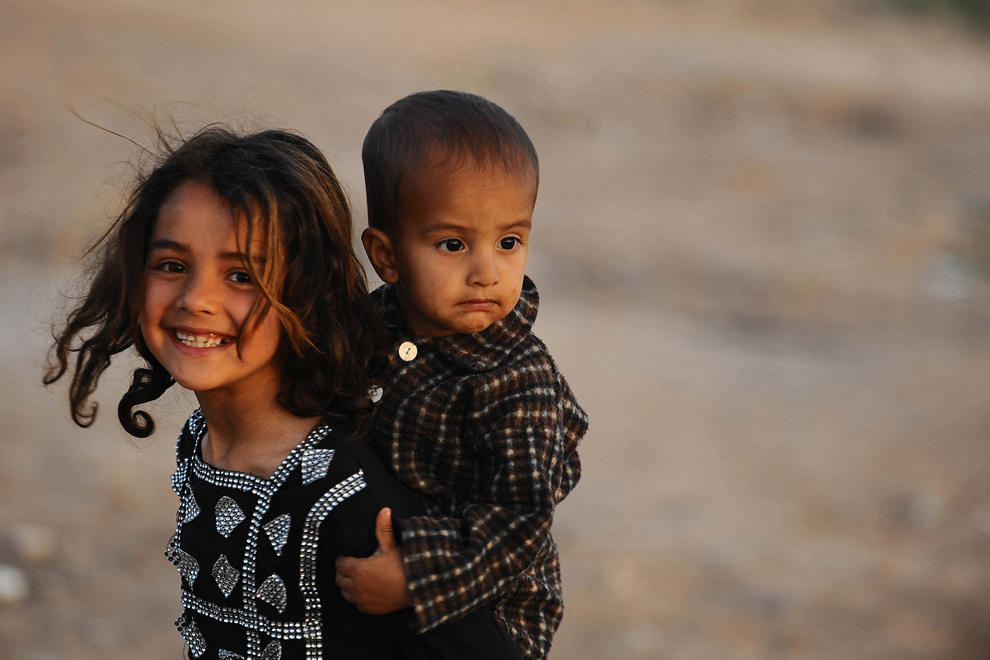 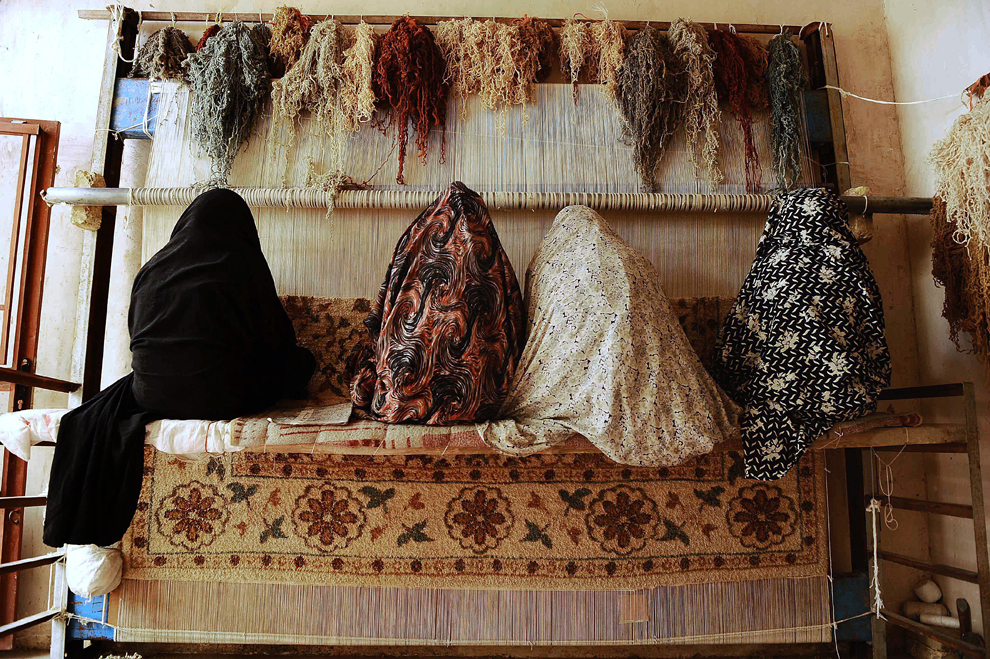 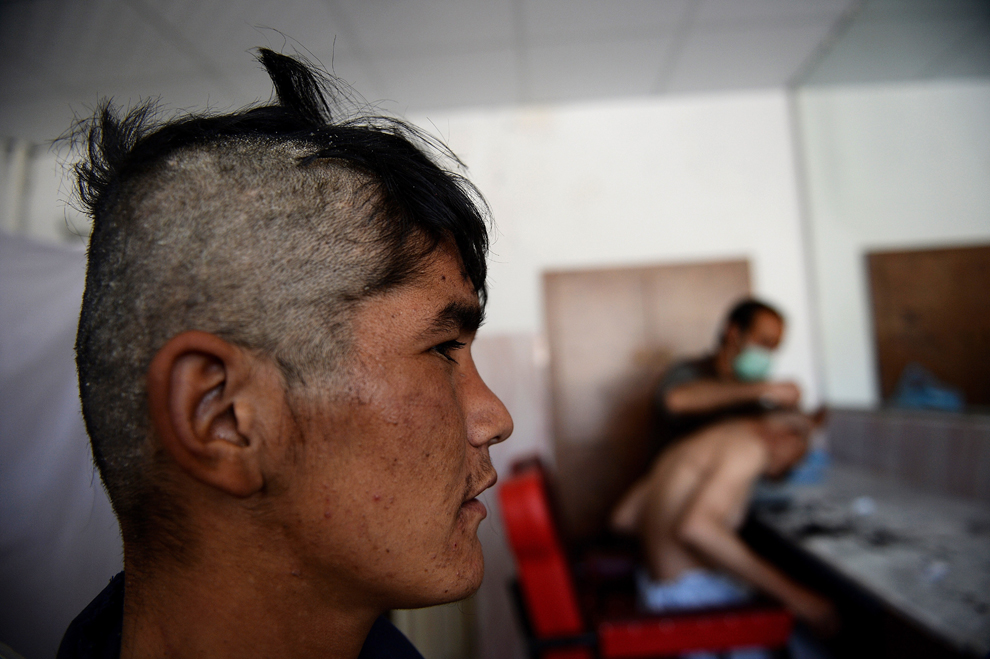 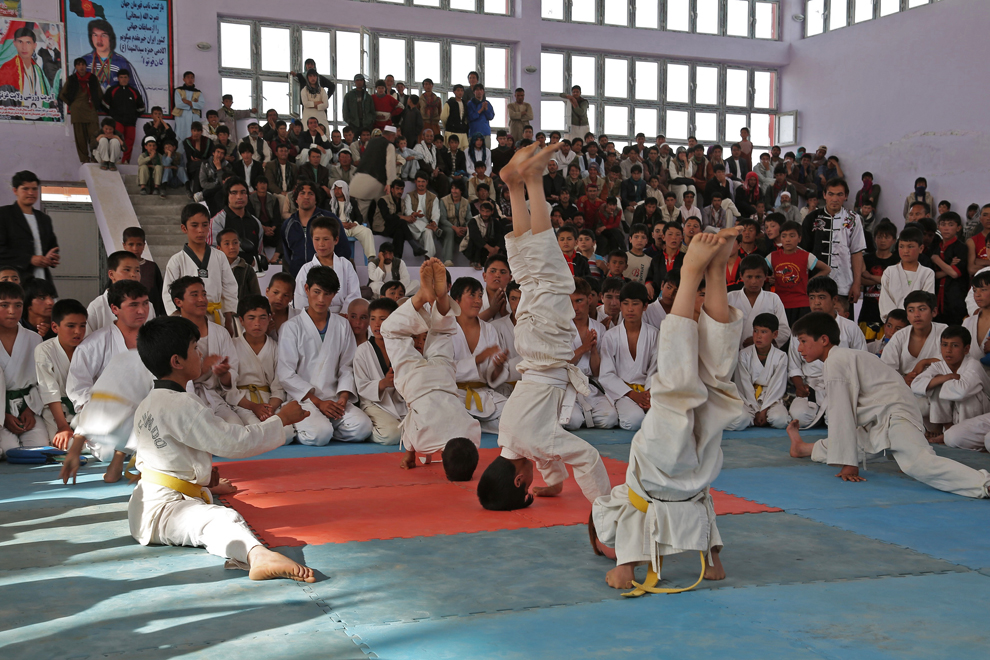 19
Athletes perform during a ceremony to honor Ghazni as the UNESCO City of Islamic Culture for the Asian region for 2013 in Ghazni on April 18, 2013. The city south of Kabul boasts a number of important pre-Islamic and Islamic sites but due to the security situation cannot be reached by foreign tourists. (Rahmatullah Alizad/AFP/Getty Images) # 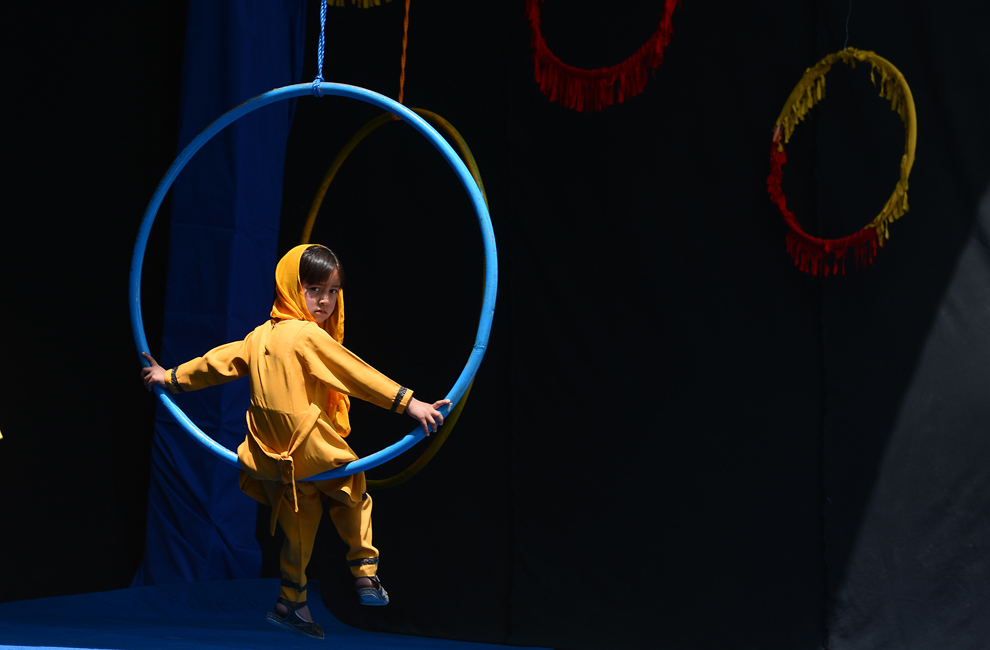 20
Children from The Mobile Mini Circus for Children take part in a performance to honor "World Circus Day" in Kabul on April 21, 2013. (Massoud Hossaini/AFP/Getty Images) # 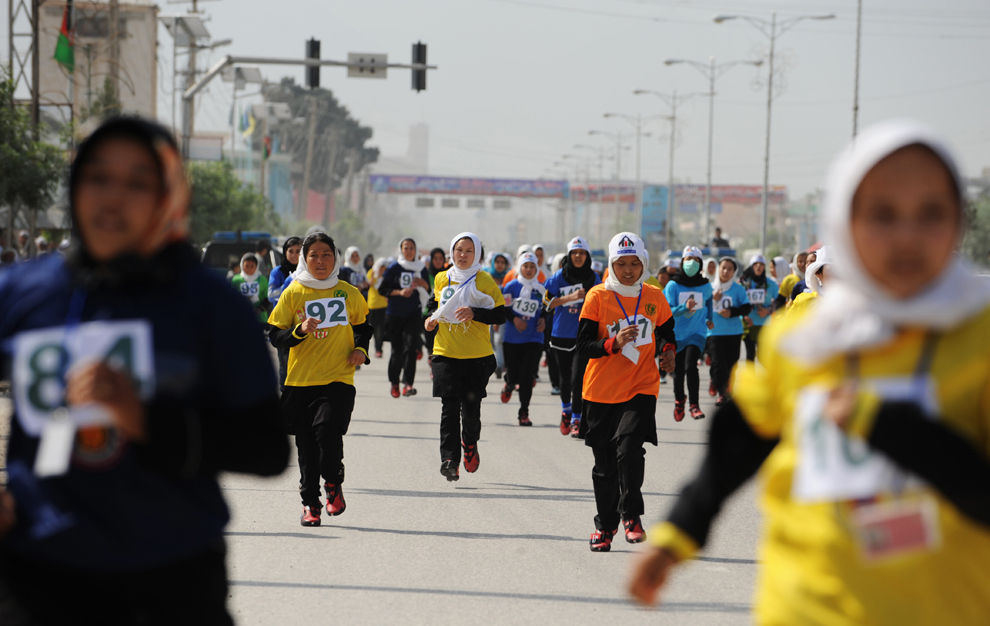 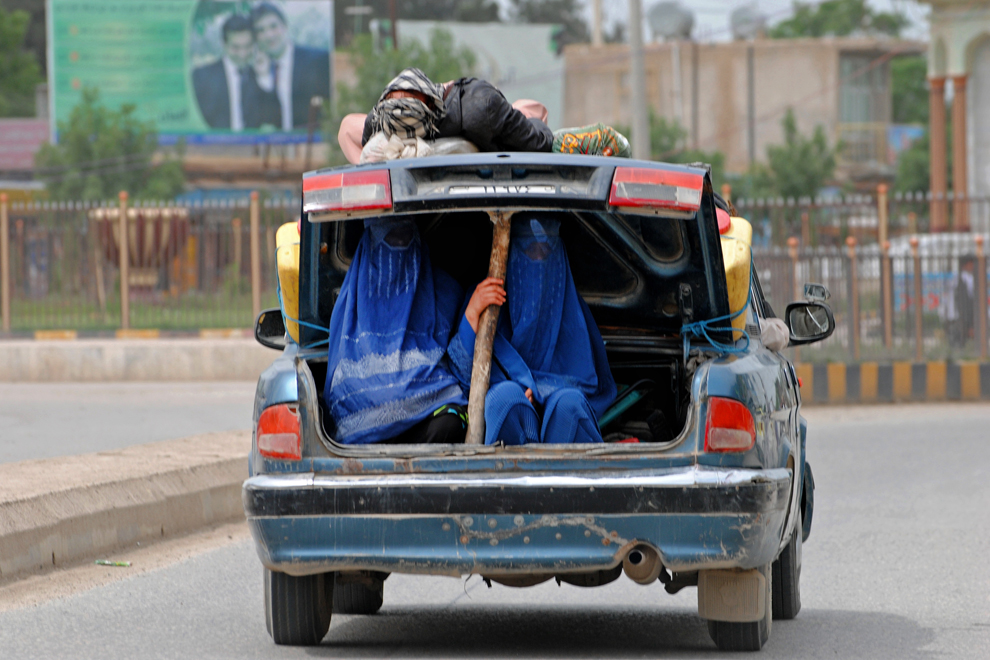 22
Polio vaccination volunteers travel to administer the vaccine during a campaign in Dehdaadi district in Balkh province on April 23, 2013. Conflict in Afghanistan and vaccination problems in Pakistan have led to a rise in polio cases there. (Farshad Usyan/AFP/Getty Images) # 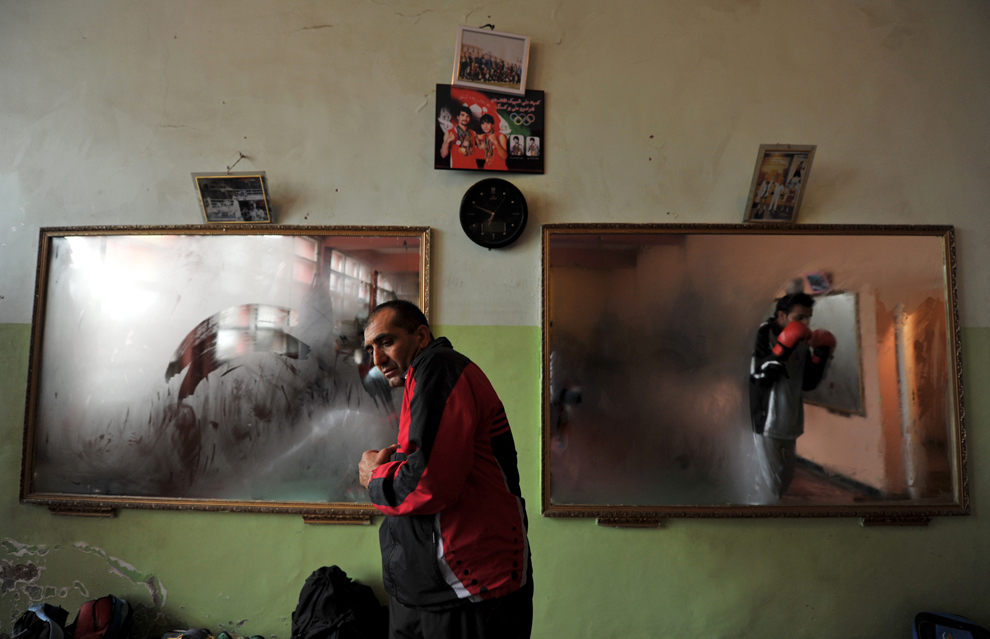 23
Boxers prepare at the Sabawon Azizi Boxing Club in Kabul on April 24, 2013. Afghan youth have made headways in boxing since the fall of the Taliban, who banned it along with most other forms of entertainment. (Manjunath Kiran/AFP/Getty Images) # 24
Girls look out of their home, which was damaged by a powerful earthquake in Charbagh village in Nangarhar province on April 24, 2013. (Shah Marai/AFP/Getty Images) # 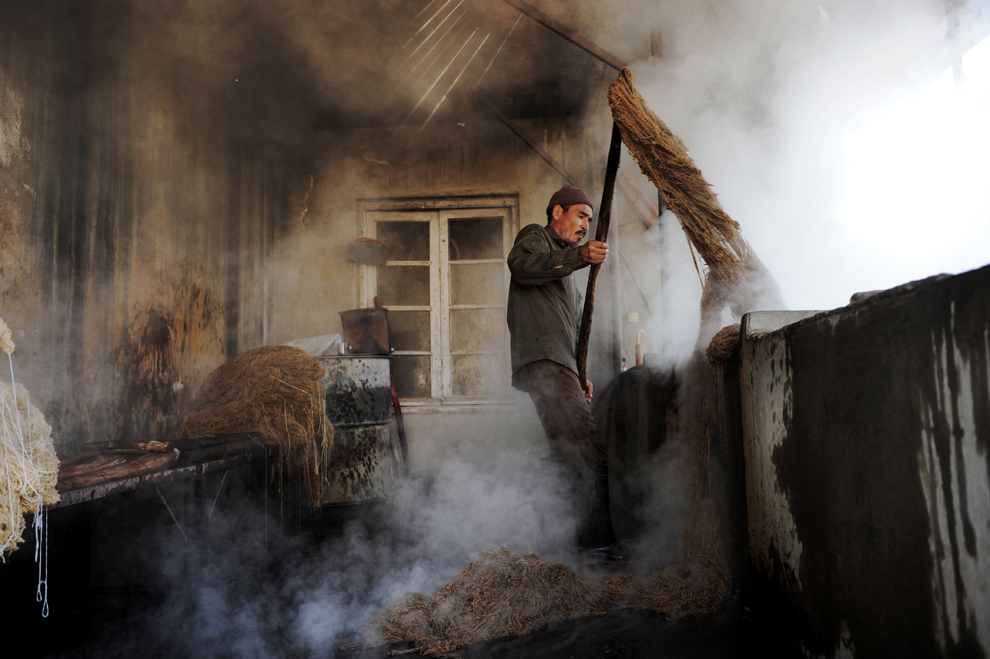 25
Sixty-two year old worker Saifullah extracts bunches of freshly dyed wool which will eventually be used by carpet weavers in Ziraat, on the outskirts of Mazar-i-Sharif, Afghanistan. Saifullah, who supports a family of eight and makes the equivalent to about 150 USD per month is one of many people involved in the process of making world renowned Afghan carpets that are known for their quality and use of natural dyes and can fetch thousands of dollars in the international market. The wool Saifullah uses is bought from local women who spin it at home. Traditional northern Afghan rugs are mostly woven by women using wooden looms which the men put together. (Farshad Usyan/AFP/Getty Images) # 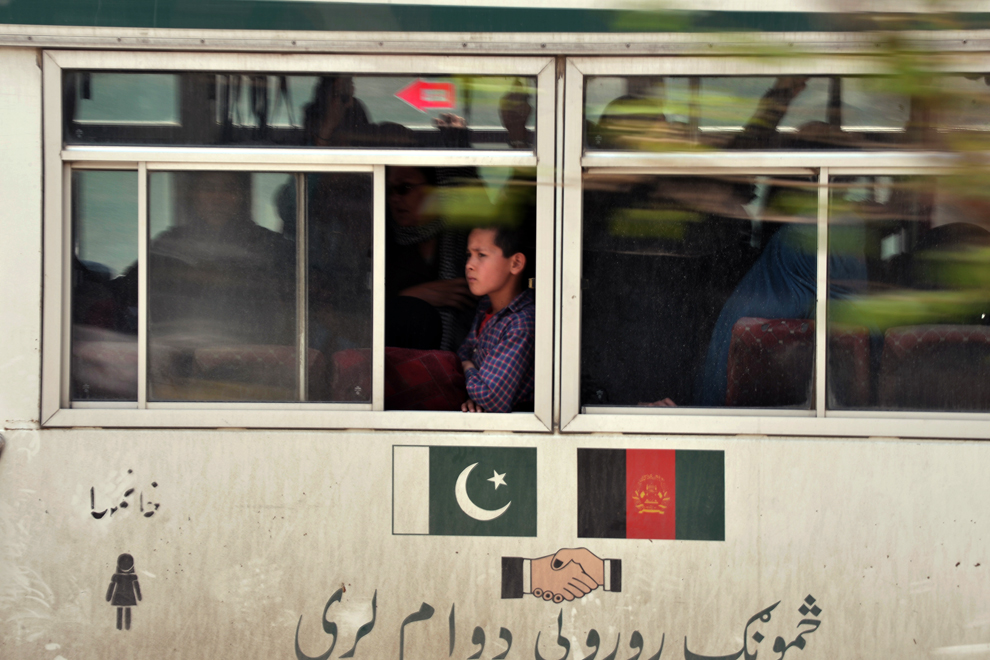 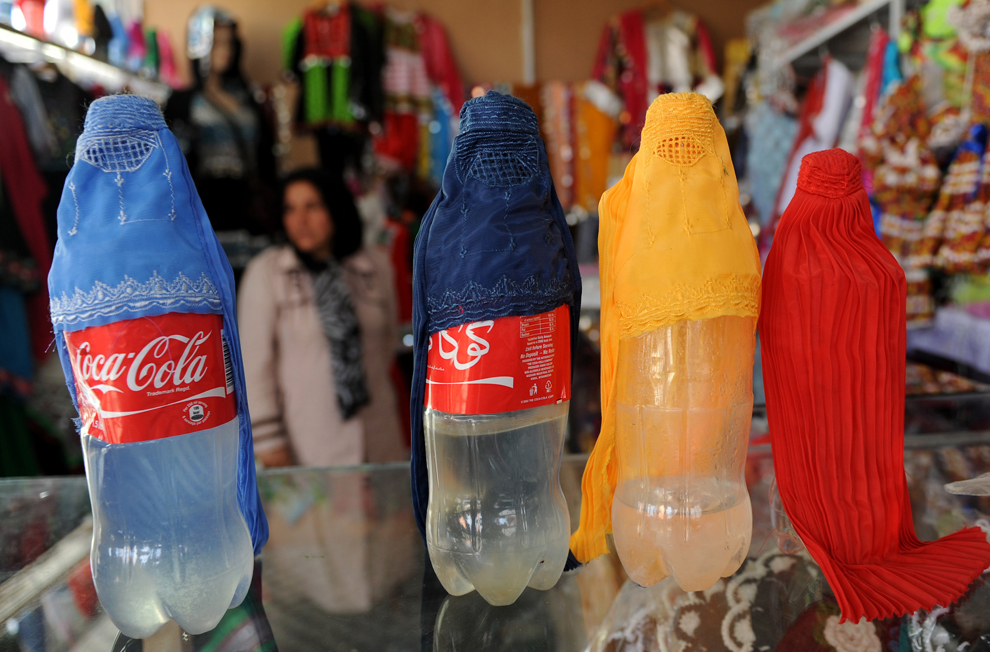 27
A store at Rabia Balkhi displays miniature designs draped on used coca-cola bottles at an all-women's market on Chedgari Street in Mazar-e-Sharif province on April 25, 2013. The market houses about 20 women-owned stores that sell a range of goods from handicrafts to beauty supplies and photography equipment, and is named after the famous princess and poet Rabia Balkhi who lived in the city of Balkh during the 9th century. (Farshad Usyan/AFP/Getty Images) # 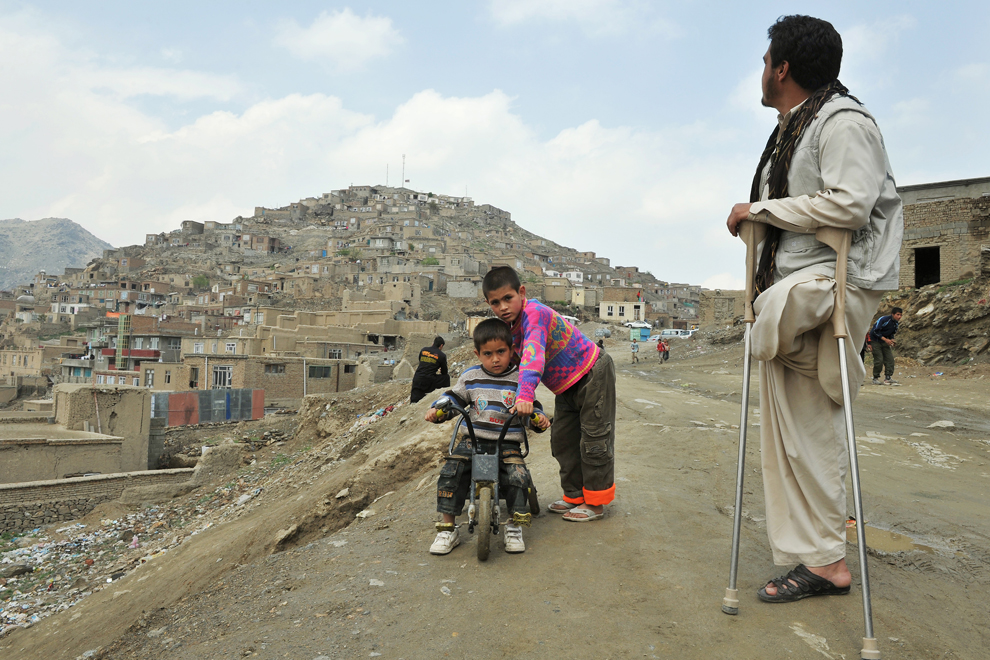 28
Residents enjoy Koh-e Asmai, popularly called TV Mountain, in Kabul on April 26, 2013. The mountain gets its nickname from the array of television broadcast towers located on its peak. (Manjunath Kiran/AFP/Getty Images) # 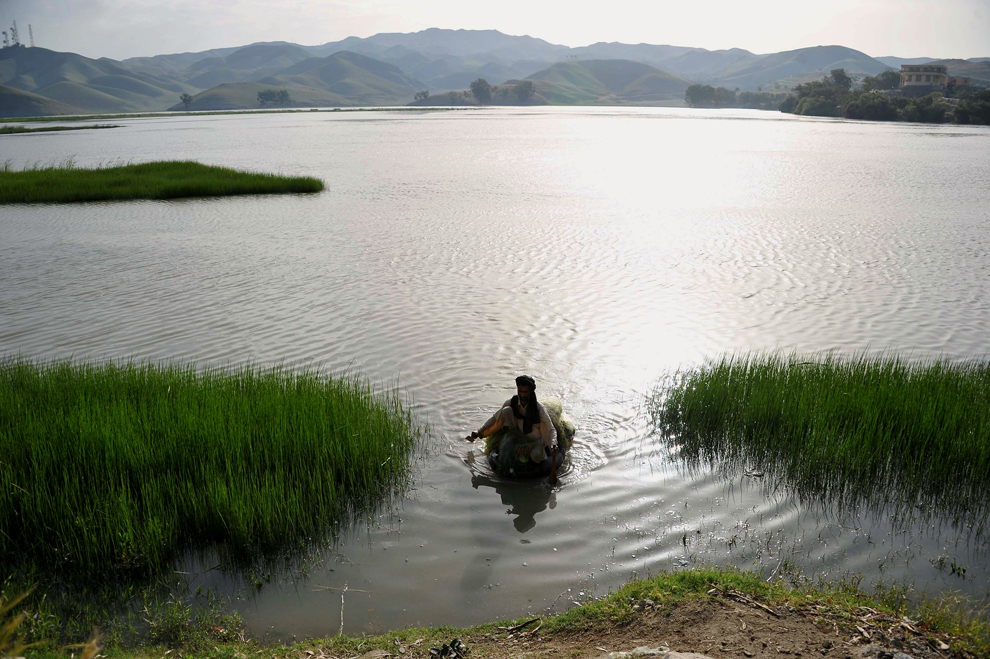 29
A fisherman paddles into the Kabul River to fish on the outskirts of Mehtar Lam in Laghman Province on April 27, 2013. (Noorullah Shirzada/AFP/Getty Images) #