One photographer's journey inside Iran

New Zealand photographer, Amos Chapple, made three visits to the Islamic Republic of Iran between December 2011 and January 2013. Chapple "was amazed by the difference in western perceptions of the country and what I saw on the groundâ¦" He goes on to say that every traveller he met inside Iran had the same sense of surprise. The government continues its anti-western campaign, but Chapple explains what was once a popular sentiment has long since faded with Iranians. Chapple describes this as a "constant embarrassment for ordinary Iranians. In the time I spent there, I never received anything but goodwill and decency, which stands in clear contrast to my experience in other middle eastern countries." A sampling of Chapple's images are featured in this post. -- Paula Nelson (The captions were provided by the photographer. All images are copyrighted.)( 25 photos total) 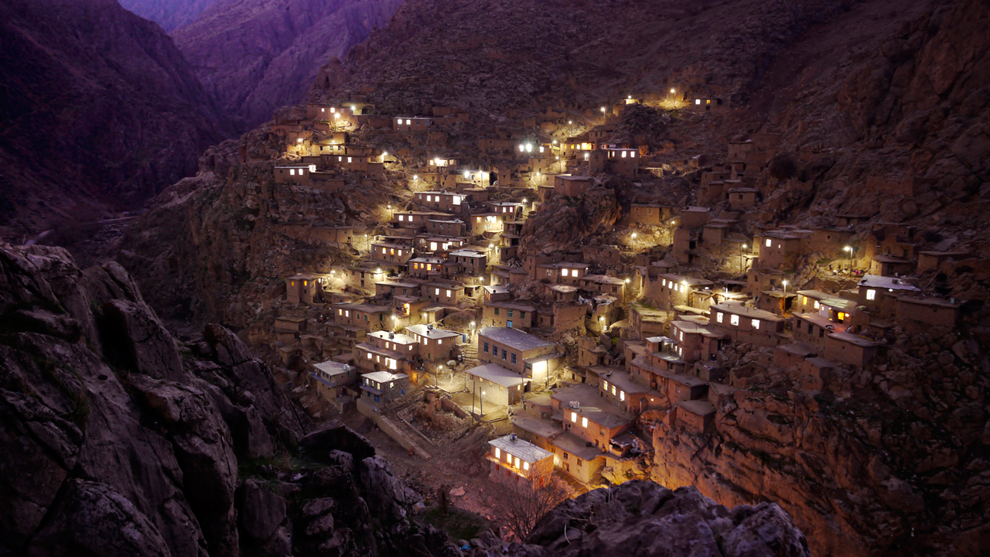 Palangan Village, in the mountains near the Iraq border. Palangan, illustrative of many of the country's rural settlements, has benefitted handsomely from government support. Many villagers are employed in a nearby fish farm, or are paid members of the Basij, whose remit includes prevention of "westoxification", and the preservation of everything the 1979 islamic revolution and its leader the Ayatollah Khomeini stood for - including strict rules on female clothing and male/female interaction. (Amos Chapple) 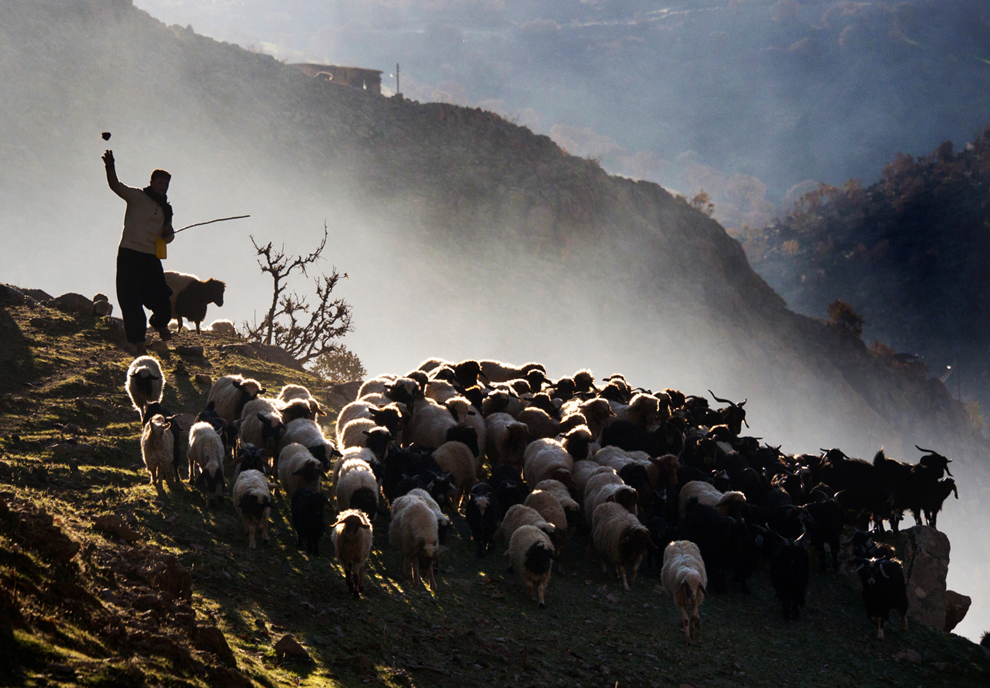 2
A shepherd leads his flock out to pasture in the mountains near the Iran-Iraq border. Rocks were used by the shepherd to guide wayward sheep. (Amos Chapple)# 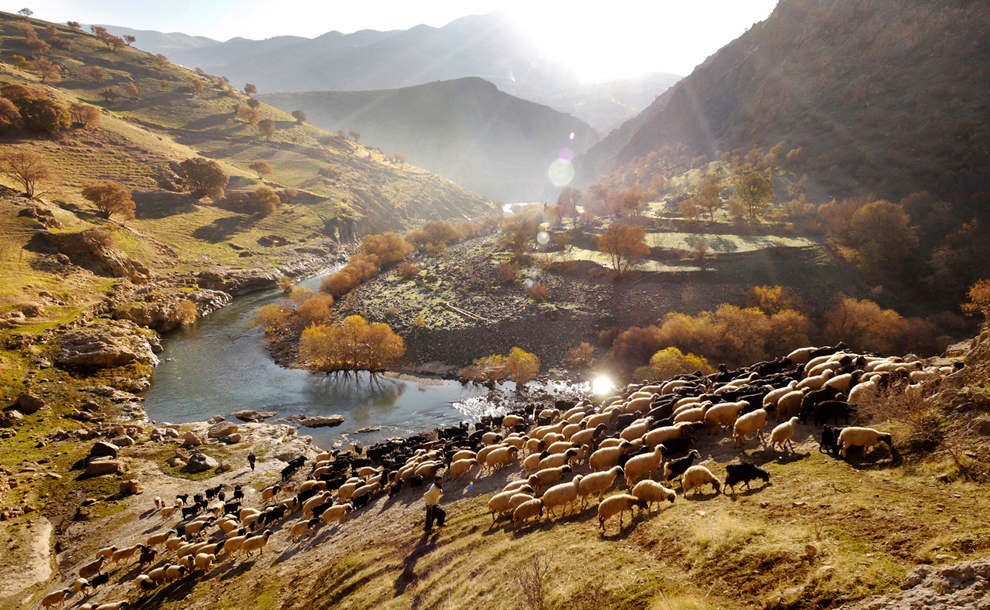 3
Two shepherds lead Palangan's flock of communally-owned sheep out to pasture. The government spending in some rural regions has bought them a network of loyal followers who can be scrambled at any time to crush trouble in the urban centers. Rural Basij were used as a part of the crackdown in 2009 which resulted in the deaths of at least 27 anti-government protestors. (Amos Chapple)# 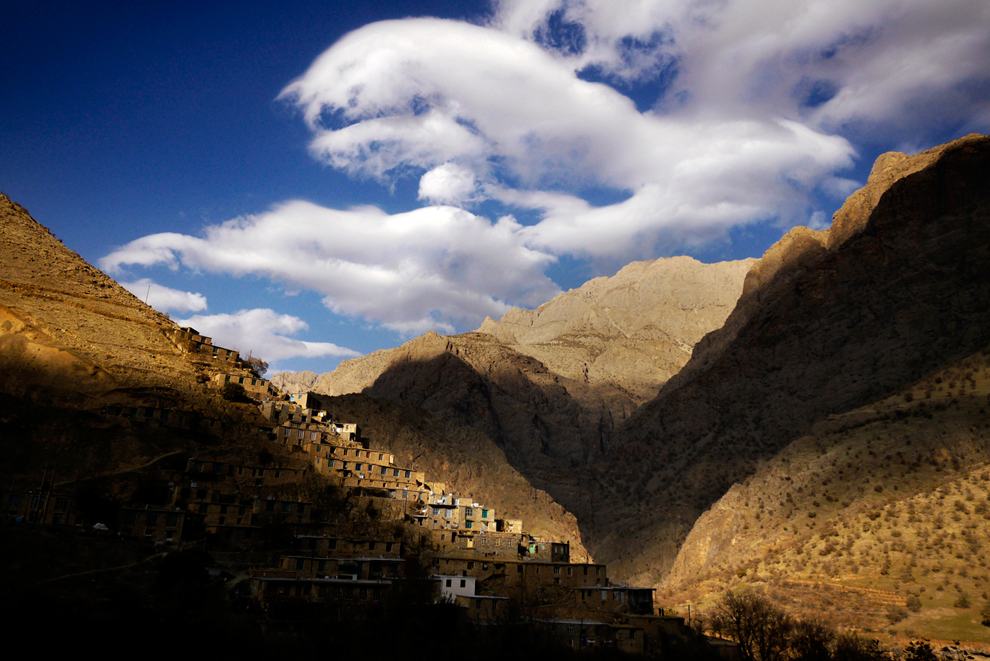 4
Clouds twist above a village in the mountainous borderlands with Iraq, near the spot where the three American hikers were arrested in 2009. (Amos Chapple)# 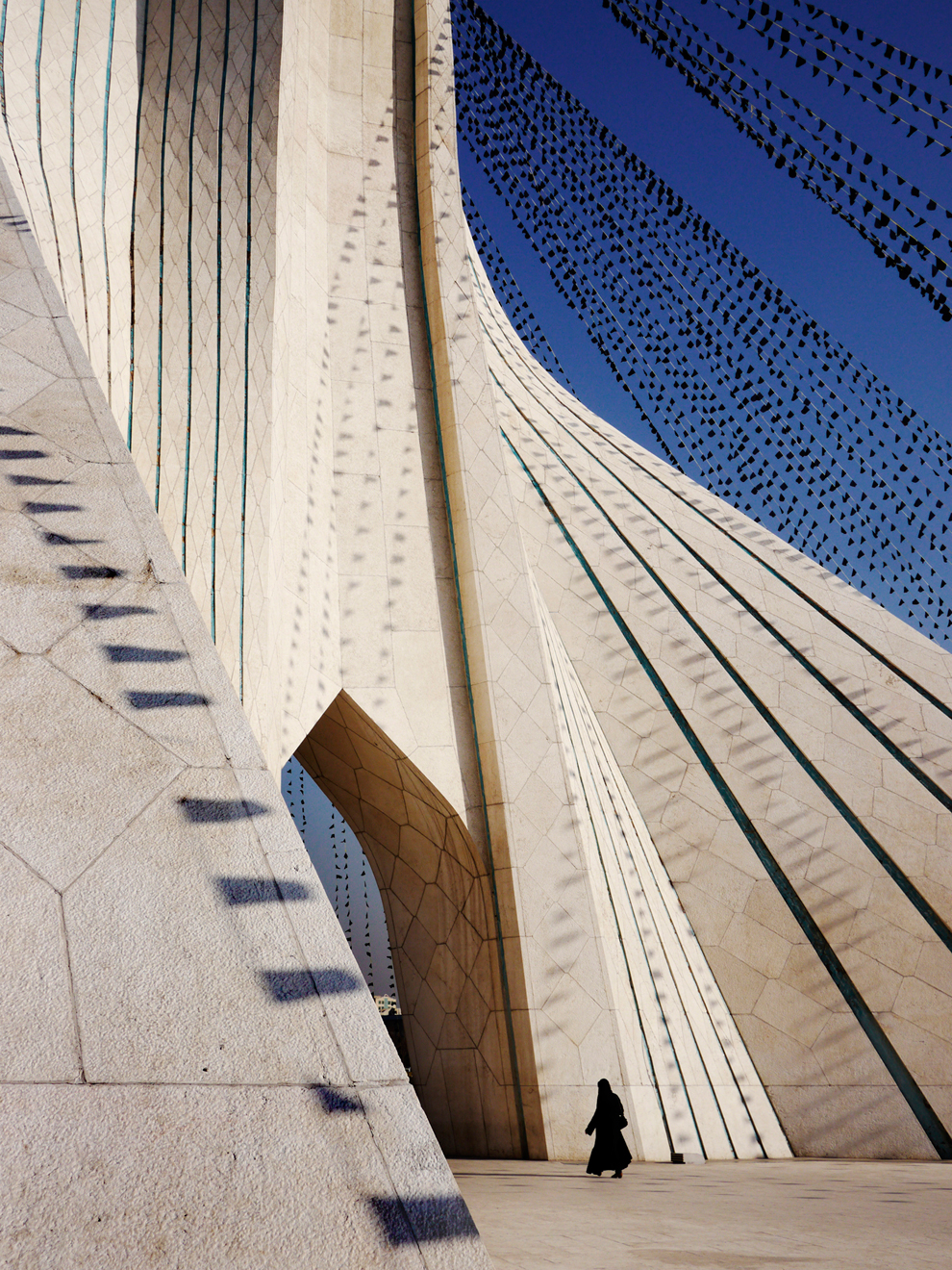 5
Azadi ("Freedom") Tower, the gateway to Tehran designed in 1966 by a then 24-year-old Hossein Amanat. A practicing Bahai'i, Hossein was forced to flee Iran after the Islamist government labeled followers of the religion "unprotected infidels." He now lives in Canada. (Amos Chapple)# 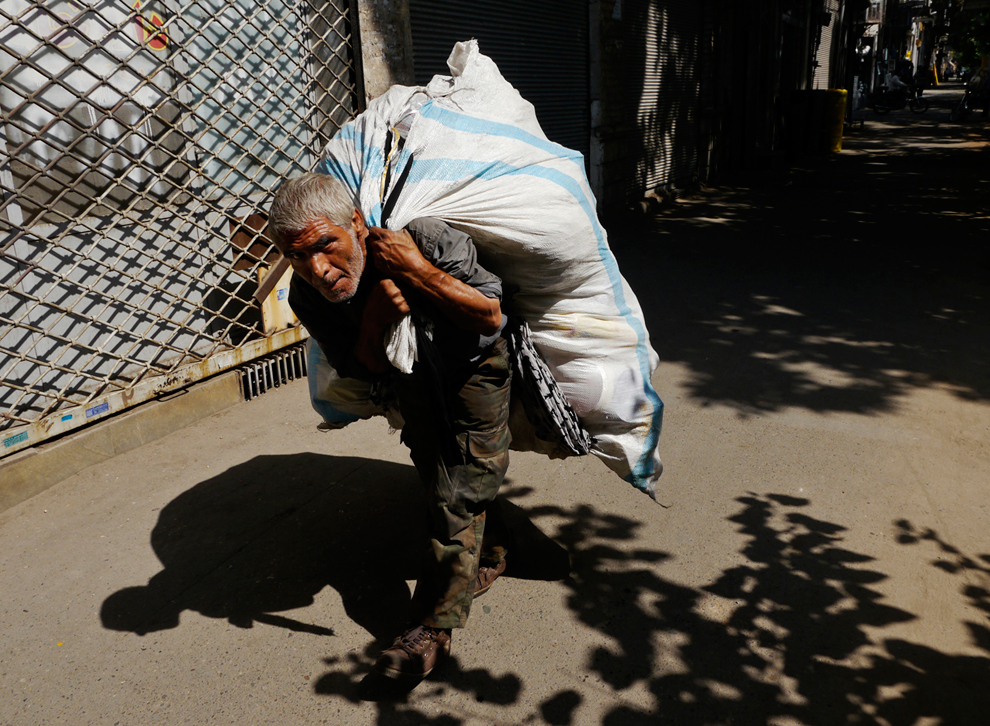 6
A man in southern Tehran, the working-class region of the city. In the past 14 months tightened sanctions have nearly halved the value of Iran's currency and fueled soaring inflation. Life is becoming drastically difficult for ordinary Iranians but many feel powerless to change the situation. Said one Tehrani, "We're not naive like the Arabs to think a violent uprising will magically fix everything. We've had our revolution...and things only got worse." (Amos Chapple)# 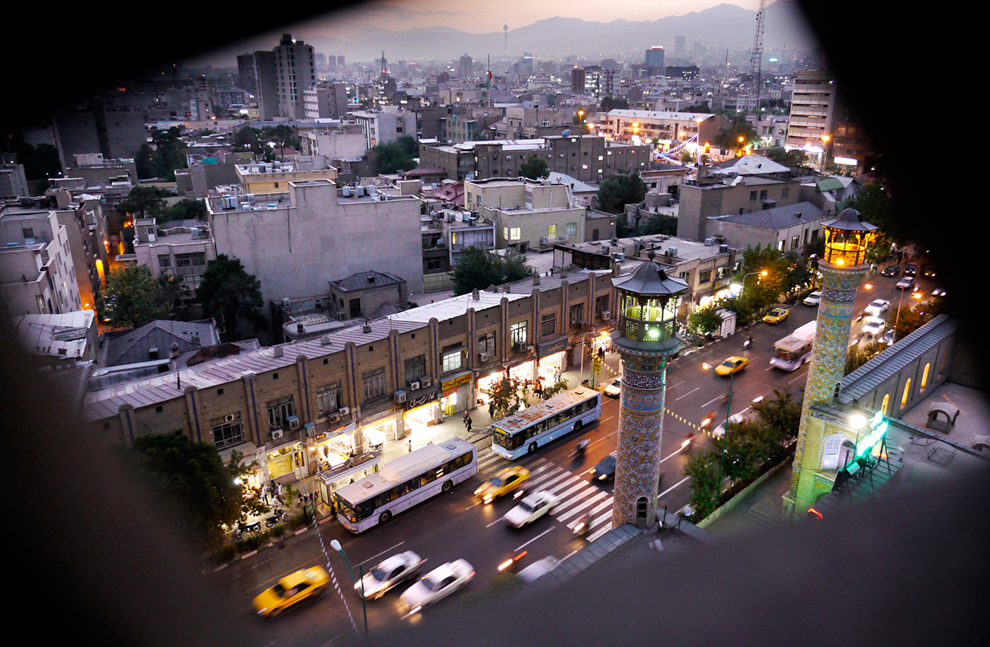 7
Central Tehran from inside a minaret, Sepahsalar Mosque. (Amos Chapple)# 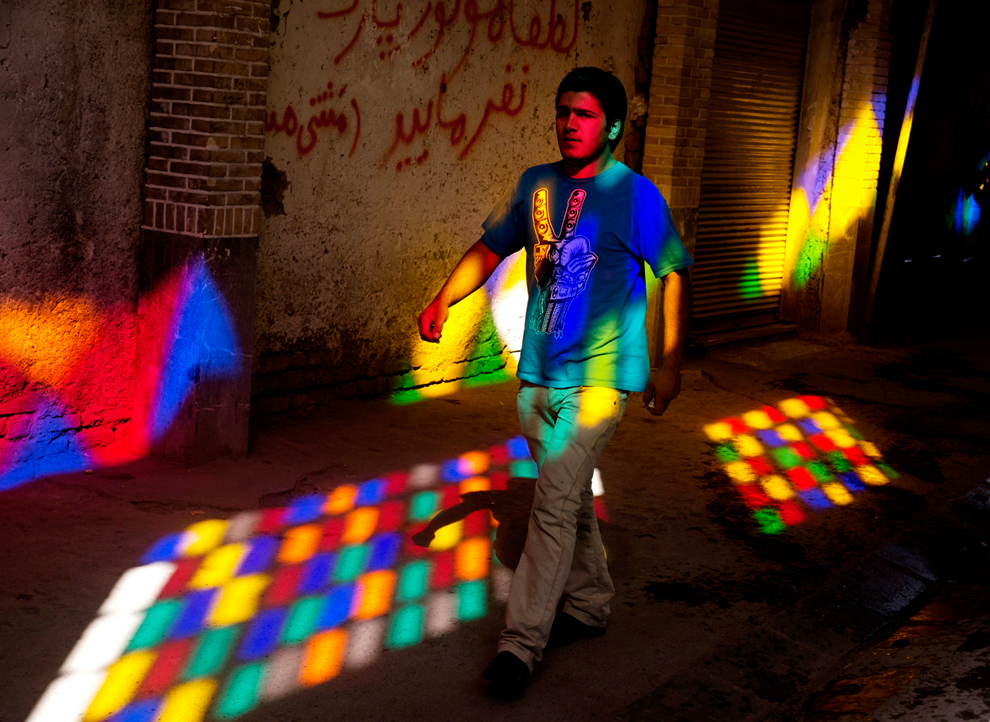 8
A young worker walks through the light of a stained glass window in the Tehran Bazaar. Under Khomeini Iranians were actively encouraged to produce large families. By 2009 nearly 70% of all Iranians were under 30, but the country is reportedly the least religious in the Middle East. Instead of the "armies for Islam" Khomeini had called for, the youthful population is now seen as the biggest threat to the deeply unpopular regime. (Amos Chapple)# 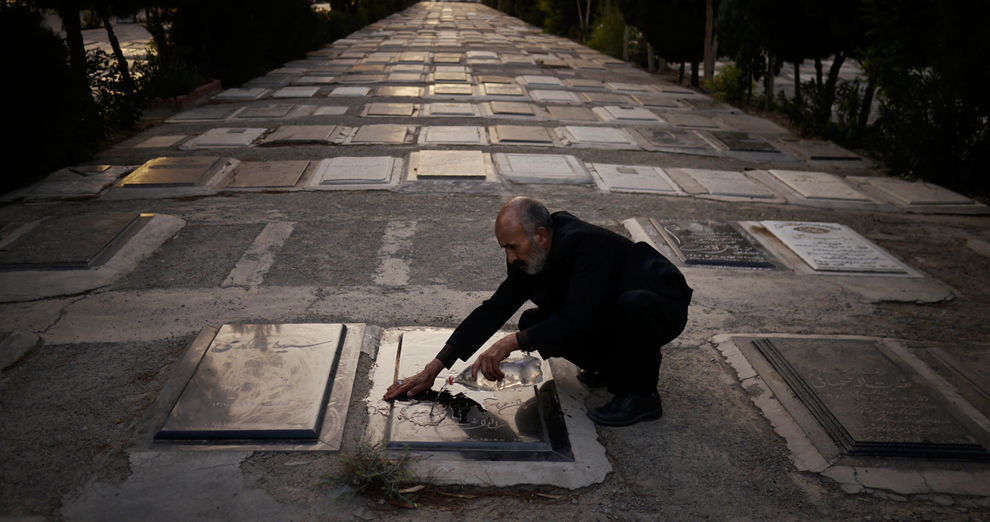 9
A man washes a gravestone at the Behesht-e Zahra, "the Paradise of the Radiant Daughter of the Prophet," a cemetery in Tehran to some 200,000 victims of the Iran-Iraq war. Once, fountains at the cemetery ran red with dye to represent the martyrs' blood. Some of the war's child soldiers were reportedly sent into battle wearing plastic "keys to Paradise" around their necks. "Ninety per cent of our people hate these mullahs... They only teach us to weep." (From Shadow of The Silk Road, by Colin Thubron.) (Amos Chapple)# 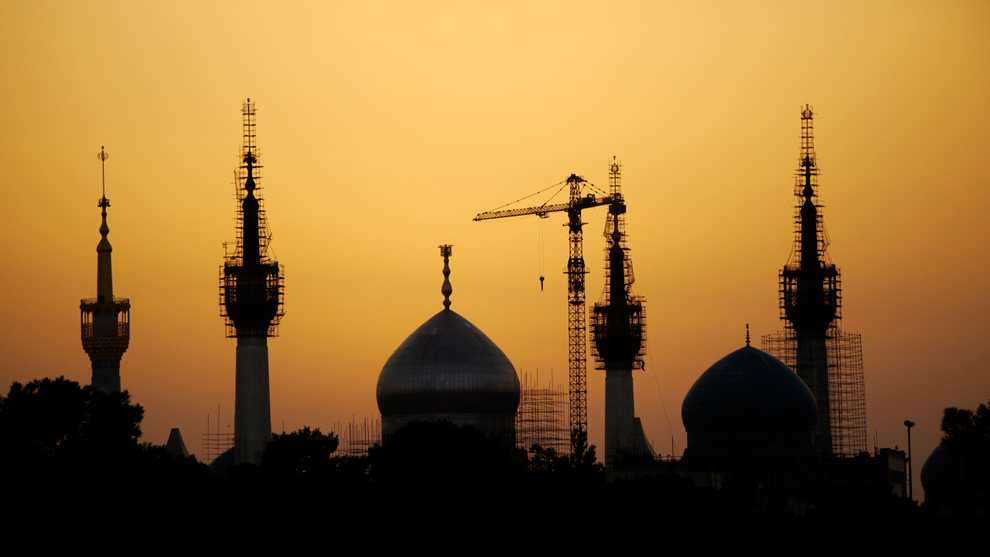 10
The Mausoleum of Ayatollah Khomeini in Tehran. Work on the unfinished building has dragged on for over 23 years. With growing economic chaos in the country, its completion is still nowhere in sight. (Amos Chapple)# 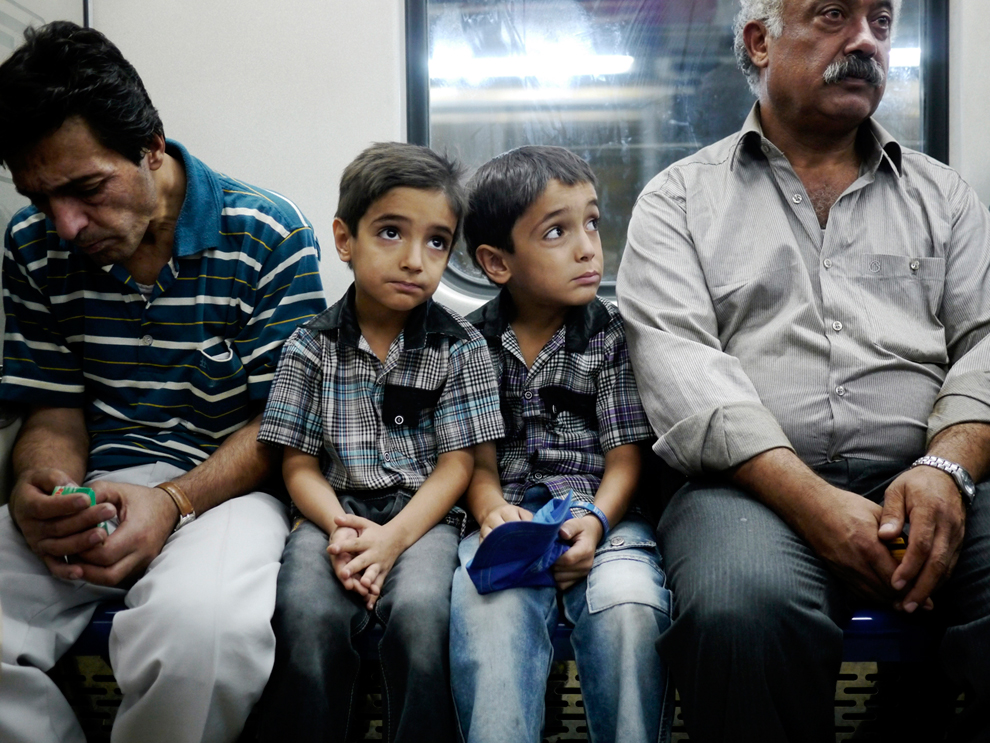 12
In Tehran, a collection of modern art valued at $2.5 billion is held by the Museum of Contemporary Art. In a little-publicized exhibition in 2011, the works, including pieces by Warhol, Pollock, Munch, Hockney and Rothko were put on display for the first time since 1979 when the owner of the art, Queen Farah Pahlavi was forced to flee Iran with her husband, the late Shah of Iran. (Amos Chapple)# 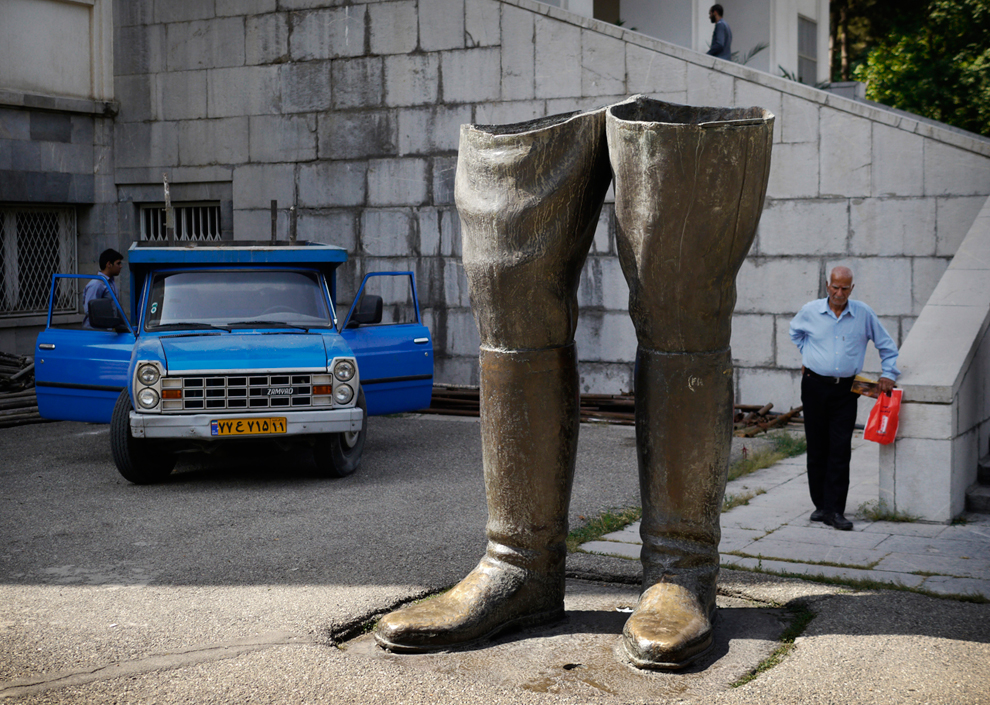 13
At the Sa'adabad Palace complex in northern Tehran, Islamic revolutionaries sawed a statue of the deposed Shah in half. Today schoolchildren are taken on group visits past the boots and into the palace to see the decadence of the former Shah's living quarters. (Amos Chapple)# 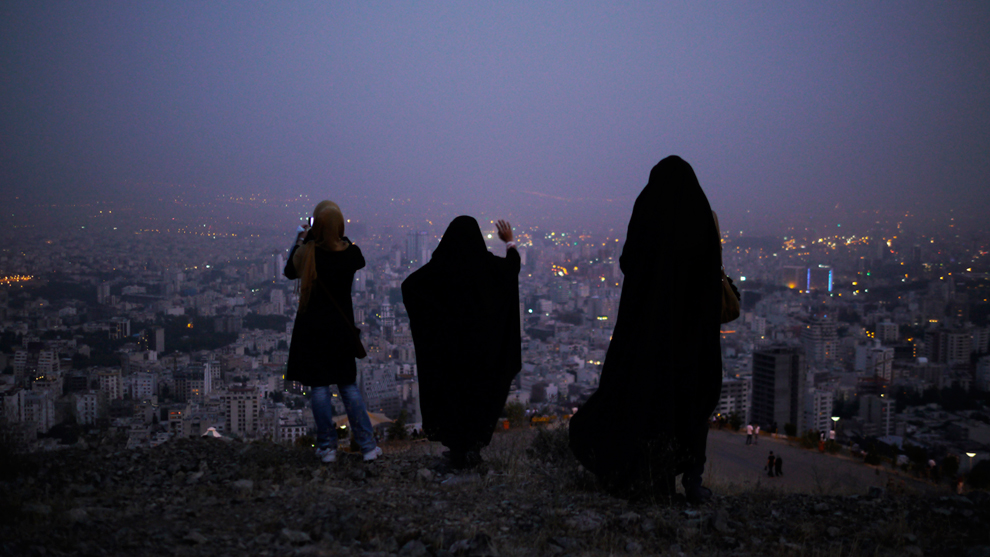 14
Women in the hills above Tehran at dusk. Concealing clothing in the Islamic Republic, including head coverings, is mandatory for women, but the exact definition of modesty is flexible, leading to a tug of war between young females and the authorities each spring. Outside metro stations female police can be seen regularly checking the passers by. If a woman's dress is considered "immodest" she is arrested and taken into custody. In 2010 a senior cleric in Tehran blamed the frequency of earthquakes in Iran on women who "lead young men astray" with their revealing clothing. (Amos Chapple)# 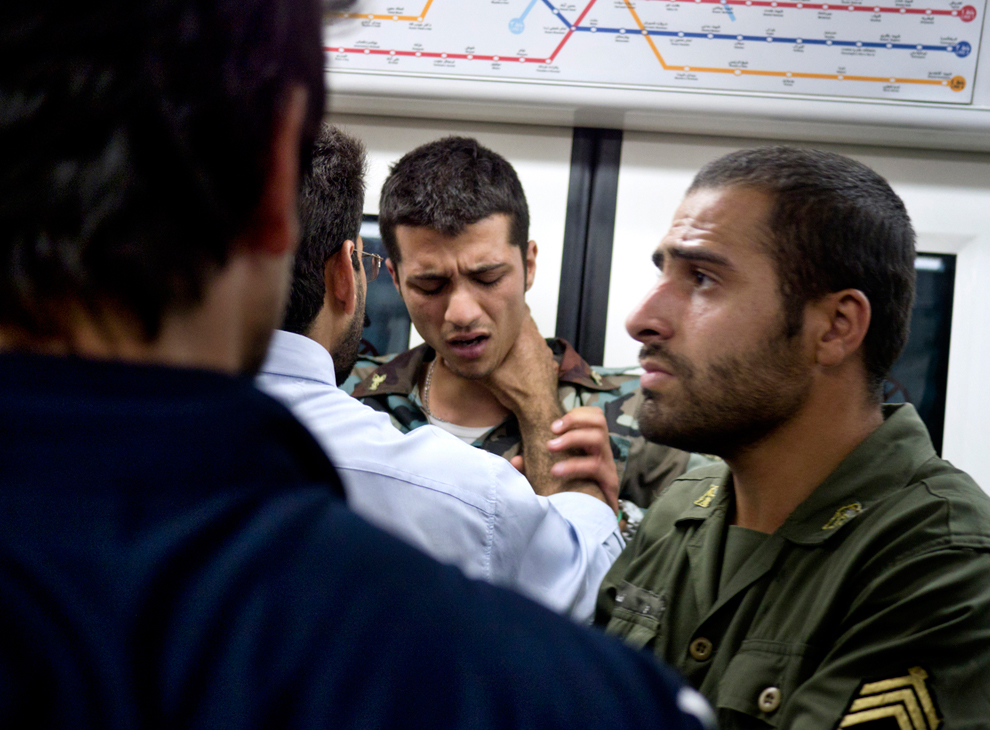 15
Two soldiers are attacked inside the Tehran metro after an argument. A soldier was punched in the head at least four times by an angry crowd of mostly well-dressed young men. Both soldiers were forced to leave the metro at the next station. (Amos Chapple)# 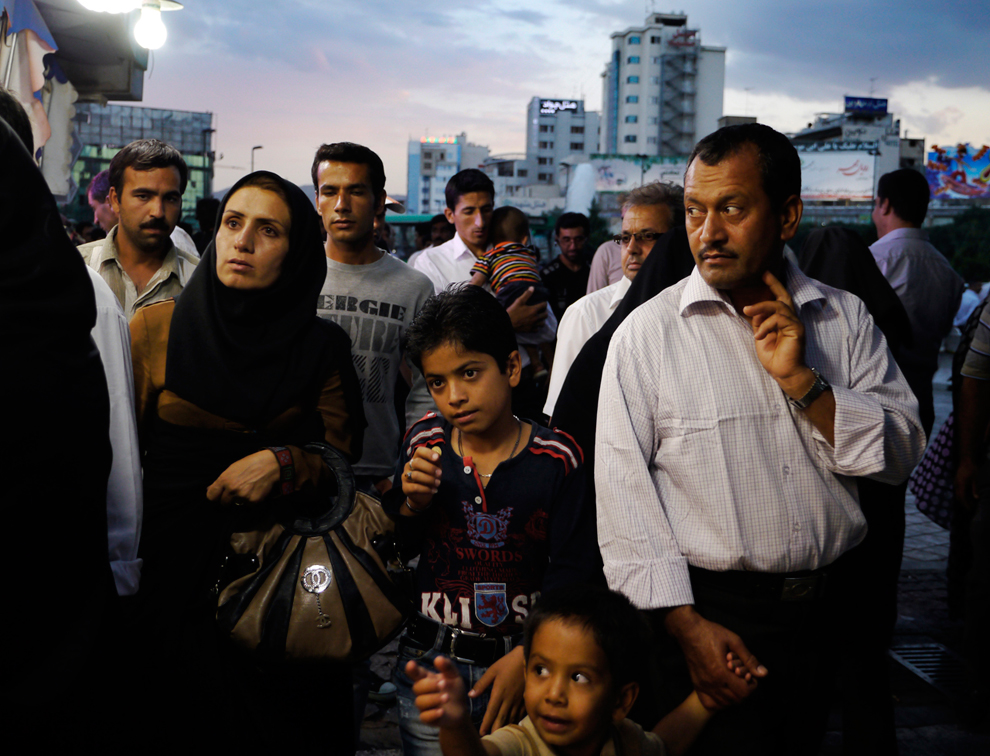 16
A street scene in Mashhad, a city in the east of Iran close to the Afghan border. In general, Iran is more Islamic in the east and some regions, particularly in the south-east borderlands close to Pakistan, are considered dangerous for tourists. (Amos Chapple)# 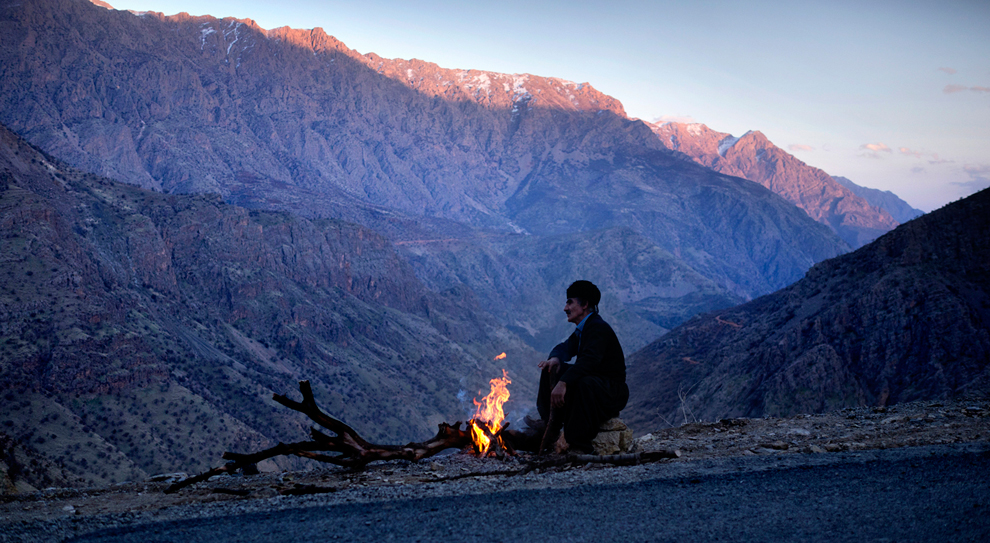 17
A Kurdish man settles in for the night guarding some roadwork machinery in the mountains near the Iran-Iraq border. The border is rife with smugglers who carry alcohol from Iraq (where alcohol is legal) into the villages on the Iranian side. From there it is transported by vehicle to the cities. In Tehran a can of beer on the black market fetches around $10 USD. (Amos Chapple)# 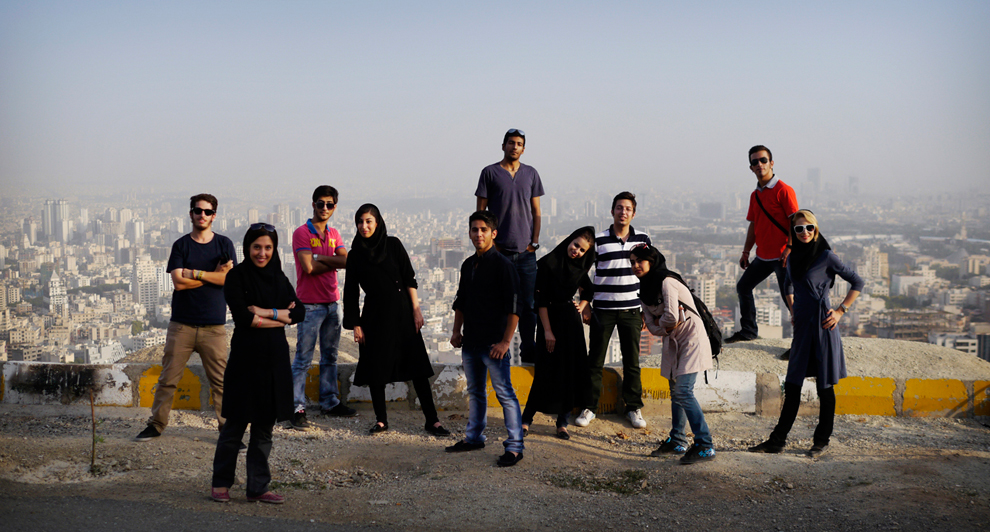 18
A group of friends in the hills above Tehran. Many young Iranians feel deeply embarrassed by their government, and the way the nation is perceived abroad. Zac Clayton, a British cyclist who will finish a round-the-world cycle on March 23 describes Iran as having the kindest people of any country he cycled through. "I found most Iranians - particularly the younger generation - to be very aware of the world around them ... with a burning desire for the freedoms they feel they are being denied by an out of touch, ultra-conservative religious elite." (Amos Chapple)# 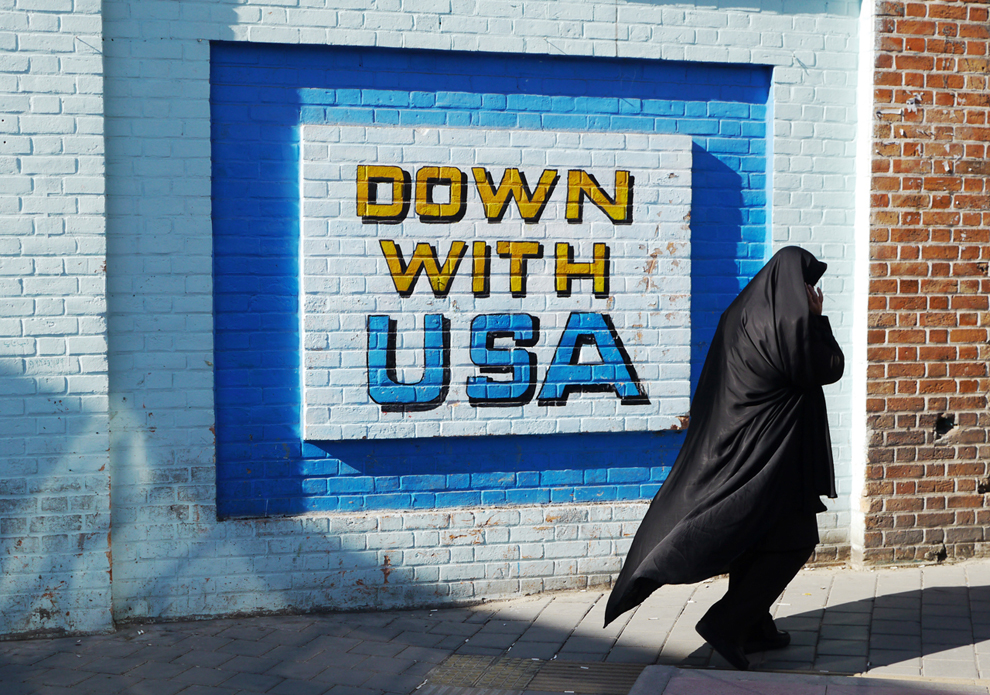 19
A mural painted on the wall of the former American embassy in Tehran. Murals such as this are at odds with statistics showing that, despite American sanctions, and the American-led coup against an elected and popular prime minister in 1953, more Iranians feel positively about America than do Turks or Indians. The regime is seen as clinging onto the once popular anti-western sentiment which brought them to power, but has long since faded. (Amos Chapple)# 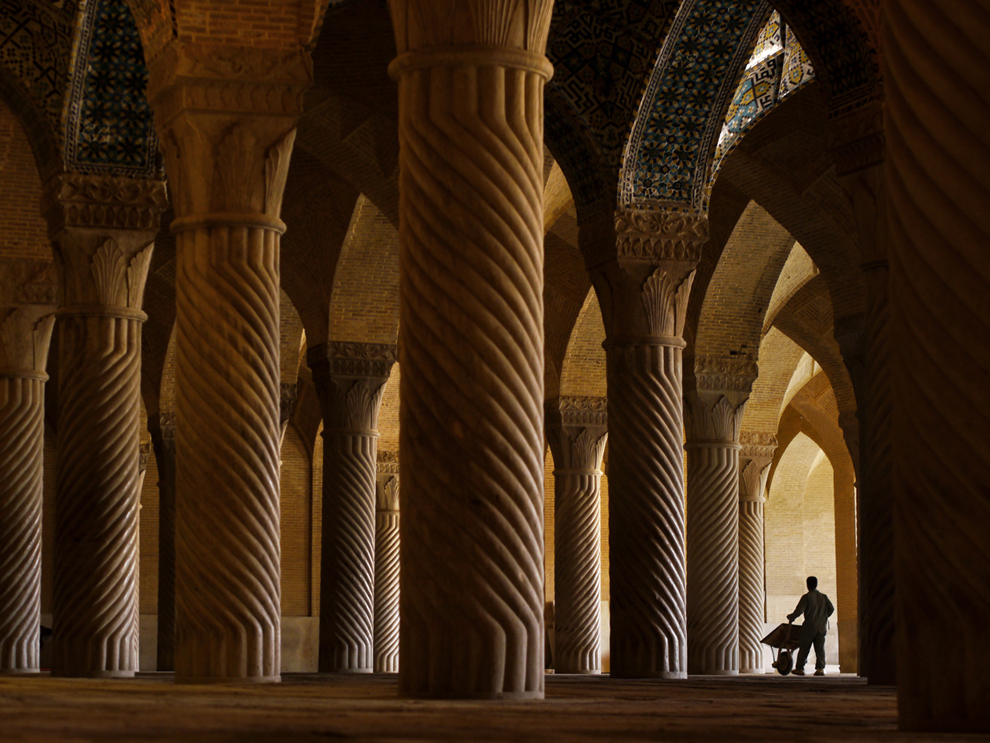 20
A worker inside Vakil Mosque, Shiraz. The mosque now serves as a tourist attraction but sees only a trickle of visitors. Although tourism is on the increase, western tourists still make up only 10% of the total. One tourist guide said westerners are scared away by the bloodcurdling rhetoric of a government completely out of touch with ordinary Iranians. (Amos Chapple)# 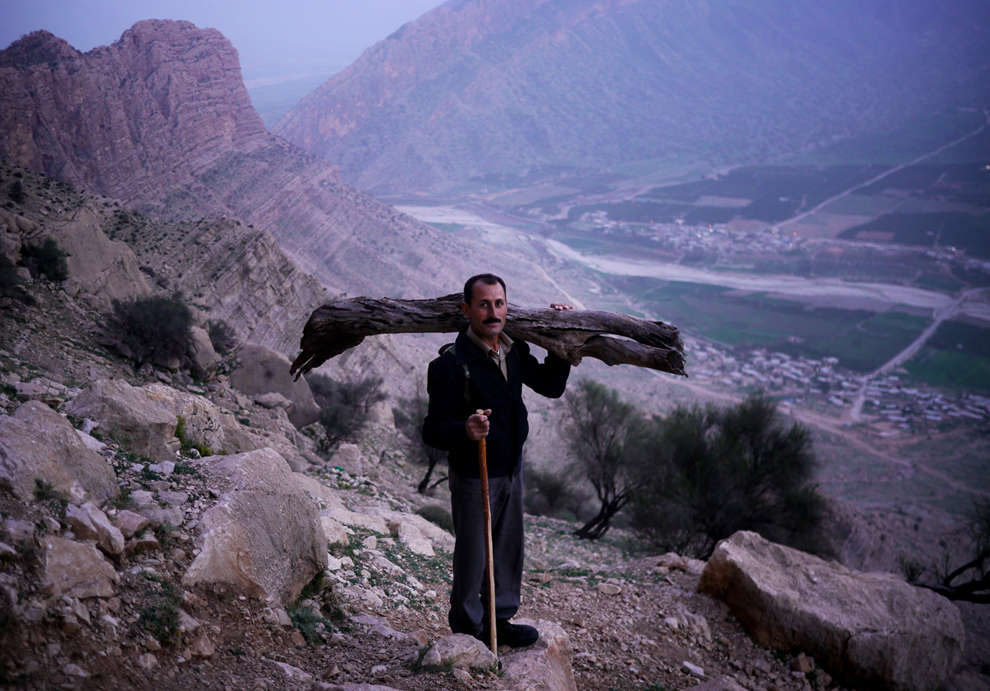 21
A security guard carrying a piece of wood he had collected for his nightly fire in the hills above Kazerun. The man was employed to guard Shapur cave, the site of an ancient statue which had been torn down following the Muslim invasion, then restored by the Shah. (Amos Chapple)# 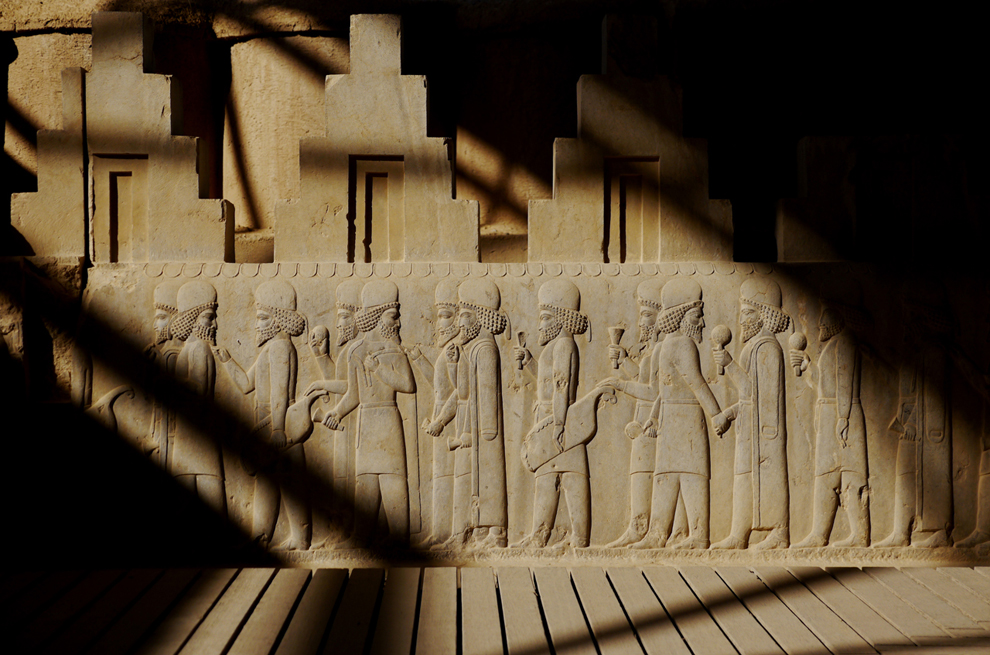 22
Detail of Persepolis, the seat of the Ancient Persian empire. The Arab conquest of Persia led to a an Islamification of Iran but Farsi, the Iranian language, has remained alive. The 11th century poet, Ferdowsi, described as "Iran's Homer", wrote an epic in Farsi which was carefully crafted with minimal Arabic influence. The "Book of Kings" has been credited with helping preserve the Farsi language - one of the world's oldest. The Book of Kings ends with the Arab invasion, depicted as a disaster for Persia. (Amos Chapple)# 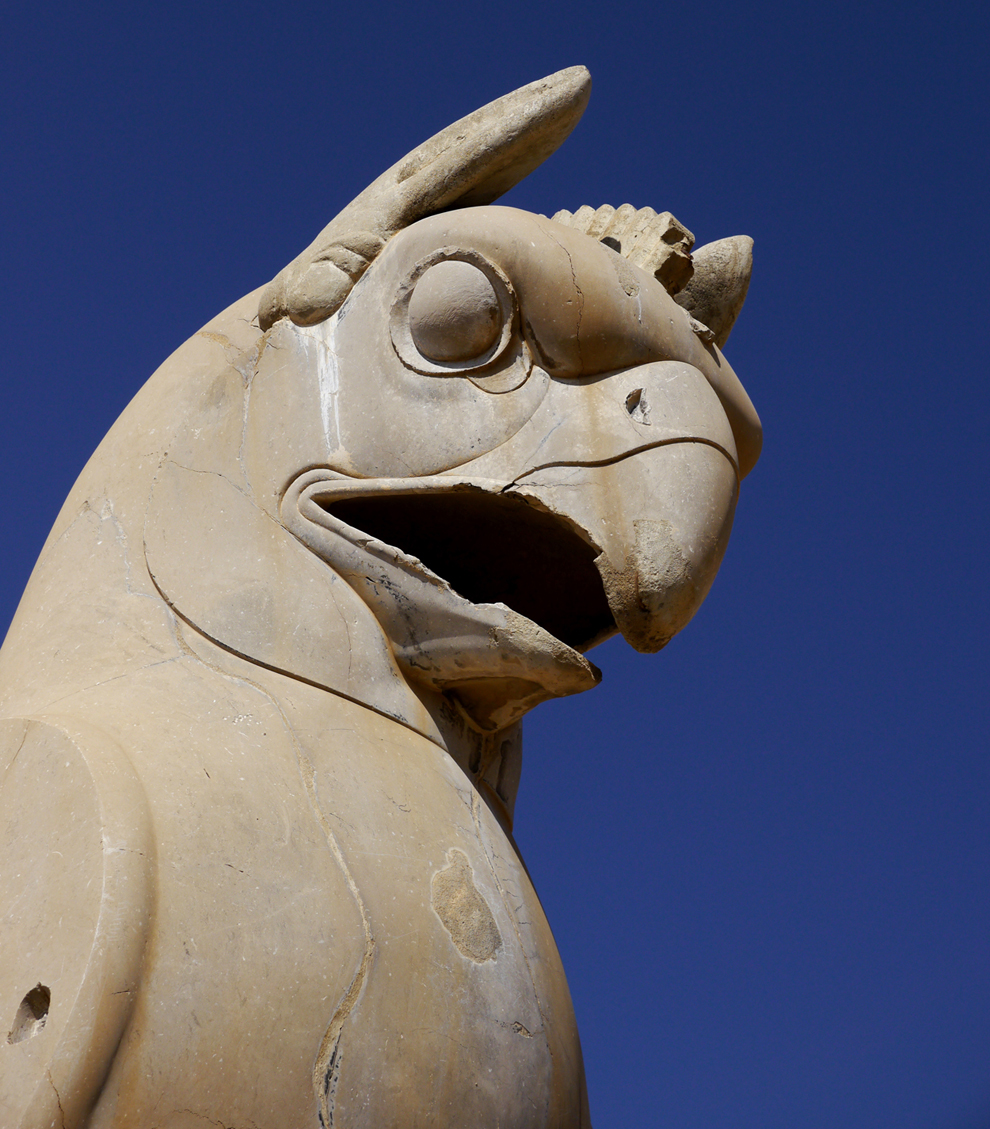 23
Detail of Persepolis. After the Islamic Revolution, hardline clerics called for the destruction of the site, but official unease prevailed. (Amos Chapple)# 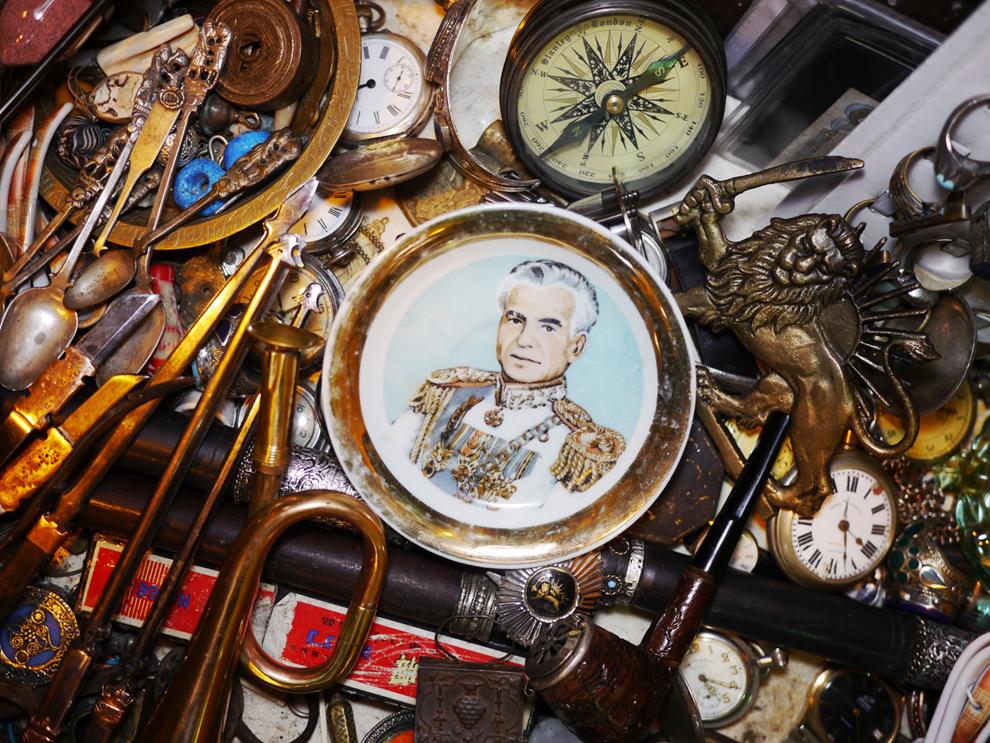 24
A commemorative plate of the former Shah of Iran in an antique store in Shiraz. The Shah was given an authoritarian hold on power thanks to a MI6 and CIA-backed coup in 1953 which deposed Prime Minister Mohammad Mosaddegh and cost the lives of several hundreds of Iranian citizens. "Operation Ajax" was actioned after Mosaddegh nationalized the petroleum industry of Iran, thus shutting out British dominance of an industry they had controlled since 1913. That Mosaddeq had been a democratically-elected leader, with wide popular support fueled resentment at the Shah, who many saw as a brutal puppet for the west. (Amos Chapple)# 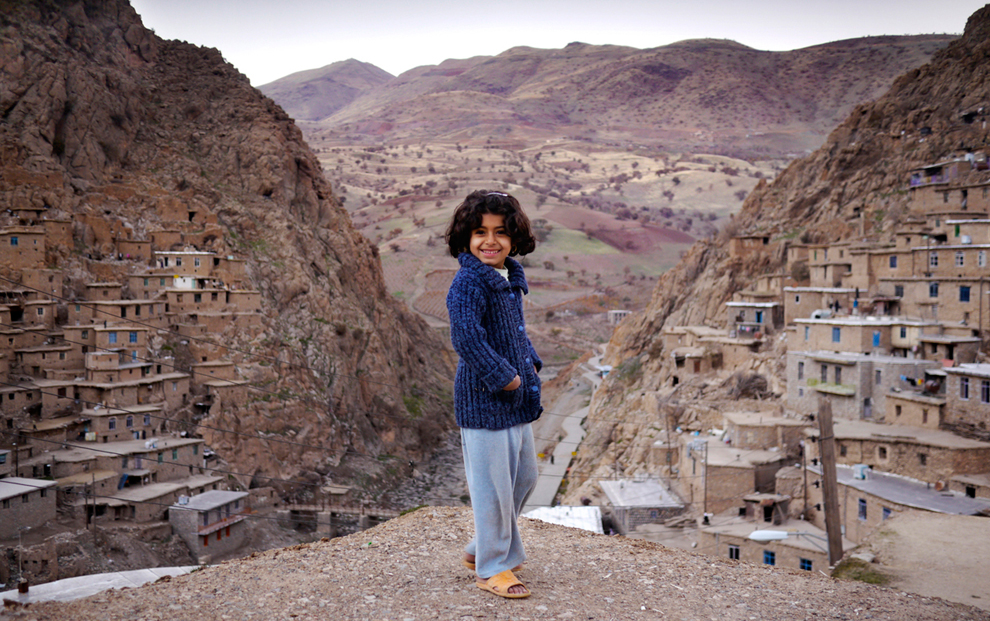 25
A Kurdish girl in Palangan Village. The valley is steep enough that the roof of one house serves as the yard for the house above. (Amos Chapple)#