Violent protests grew in India over the death of a young woman student who was raped in New Delhi in December by several men in a moving bus. She died from the injuries she received in the brutal attack resulting in severe internal injuries. She was cremated away from the public glare, but her case spoke loudly to the general population. Demonstrators are seeking action from a government that has long been at a loss as to how to deal with rape cases in Indian society. The men have been charged with murder and could face the death penalty. -- Paula Nelson ( 25 photos total) 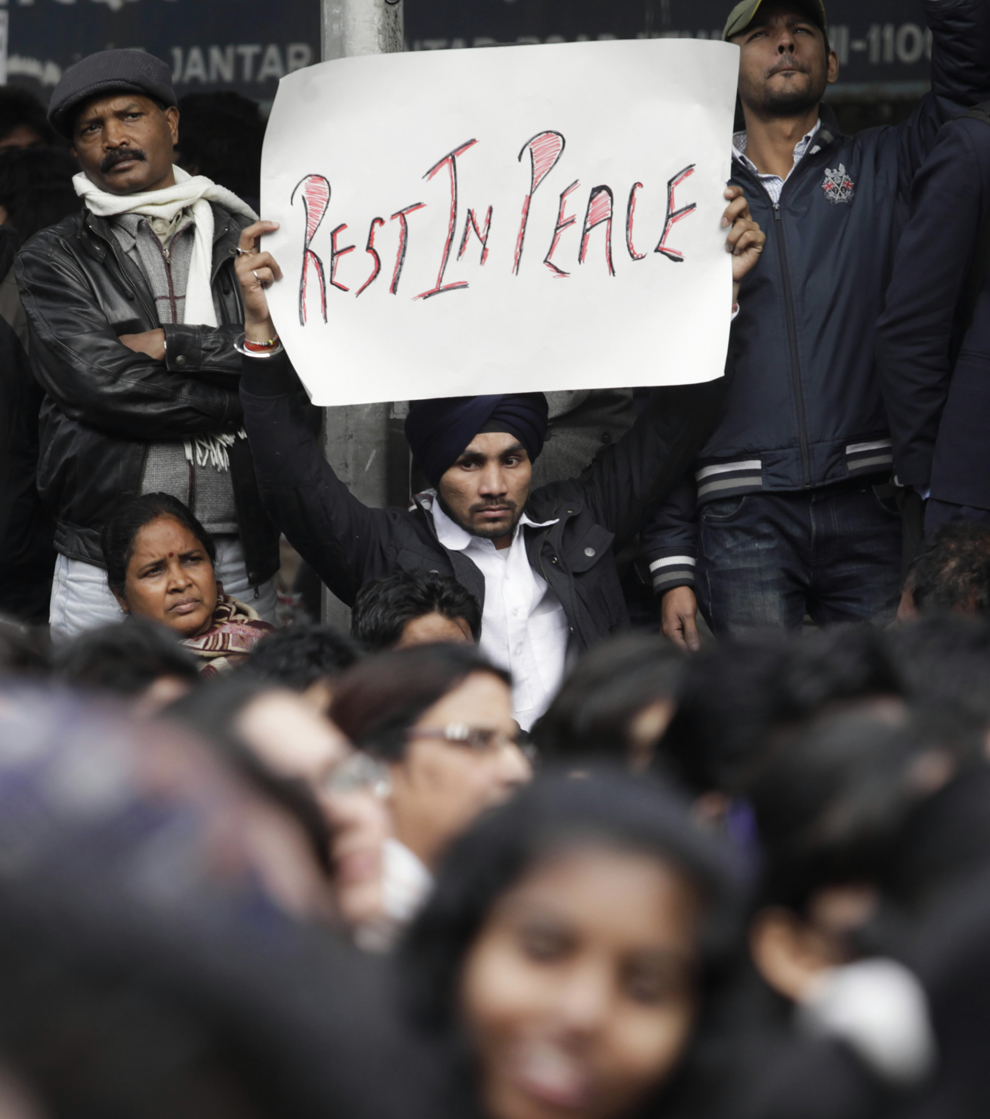 Indian protesters hold banners during a rally in New Delhi, Dec. 30, 2012, following the cremation of a gangrape victim in the Indian capital. The victim of a gang-rape and murder which triggered an outpouring of grief and anger across India was cremated at a private ceremony, hours after her body was flown home from Singapore. The 23-year-old student, the focus of nationwide protests since she was brutally attacked on a bus in New Delhi two weeks ago, was cremated away from the public glare at the request of her parents. (Andrew Caballero-Reynolds/AFP/Getty Images) 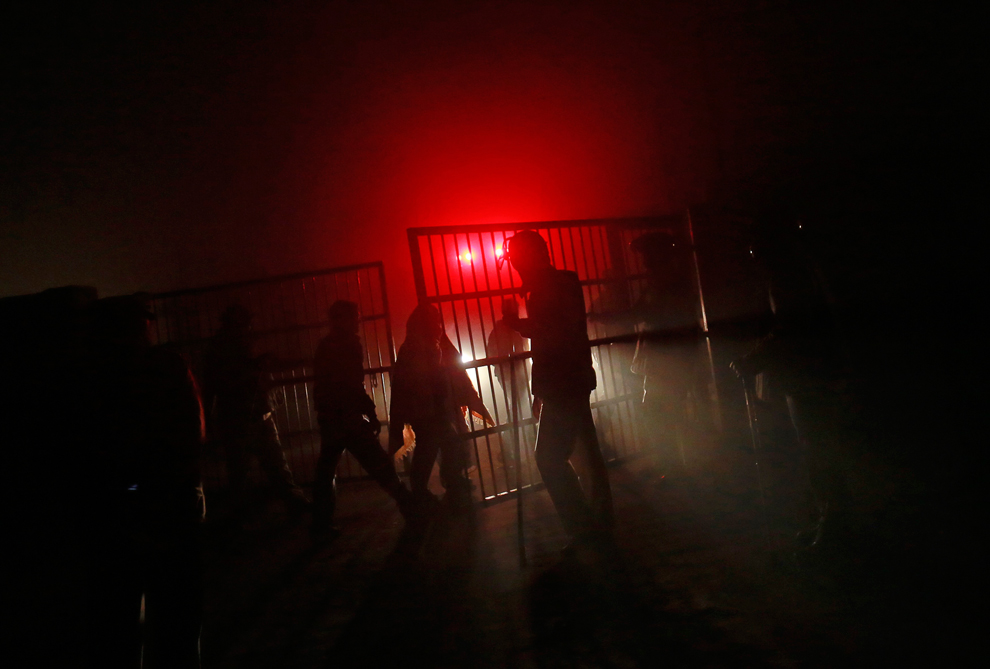 2
Mourners arrive at a cremation ground to attend the funeral of a rape victim, in New Delhi Dec. 30, 2012. The 23-year-old medical student died from her injuries, prompting promises of action from a government that has struggled to respond to public outrage. She had suffered brain injuries and massive internal damage in the attack, Dec. 16, and died in hospital in Singapore where she had been taken for treatment. (Danish Siddiqui/Reuters)# 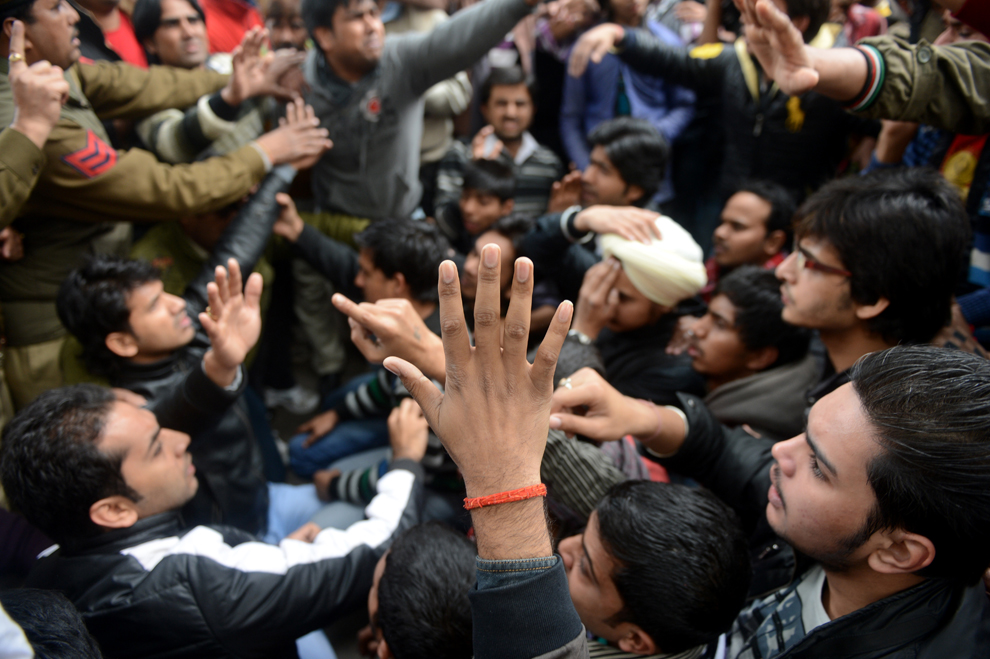 3
Indian protestors shout slogans during a rally in New Delhi, Dec. 30, 2012, following the cremation of a gangrape victim in the Indian capital. (Raveendran/AFP/Getty Images)# 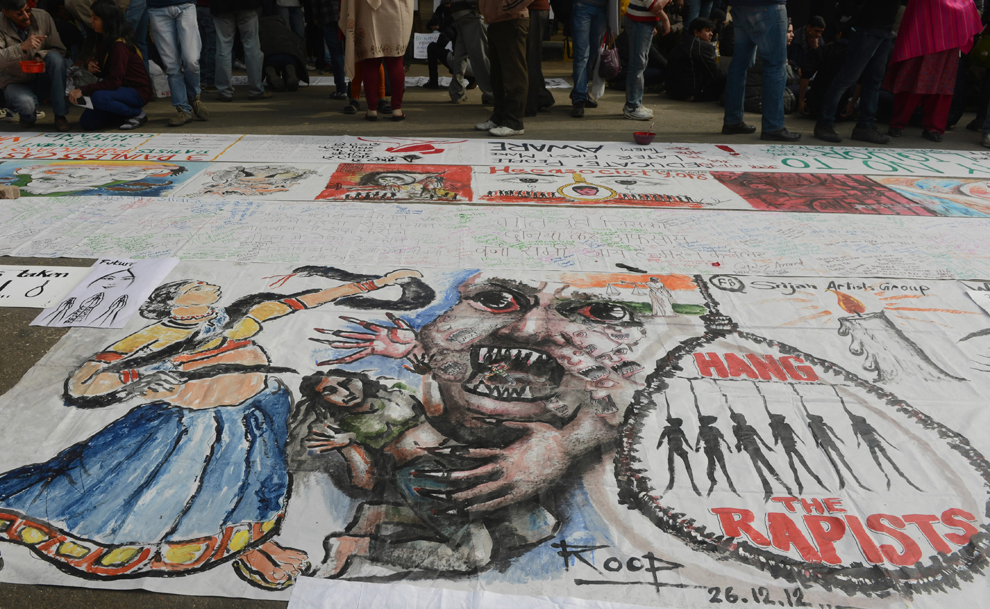 4
Indian bystanders look at a banner featuring images of 'government and rapists' on a road in New Delhi, December 30, 2012. (Raveendran/AFP/Getty Images)# 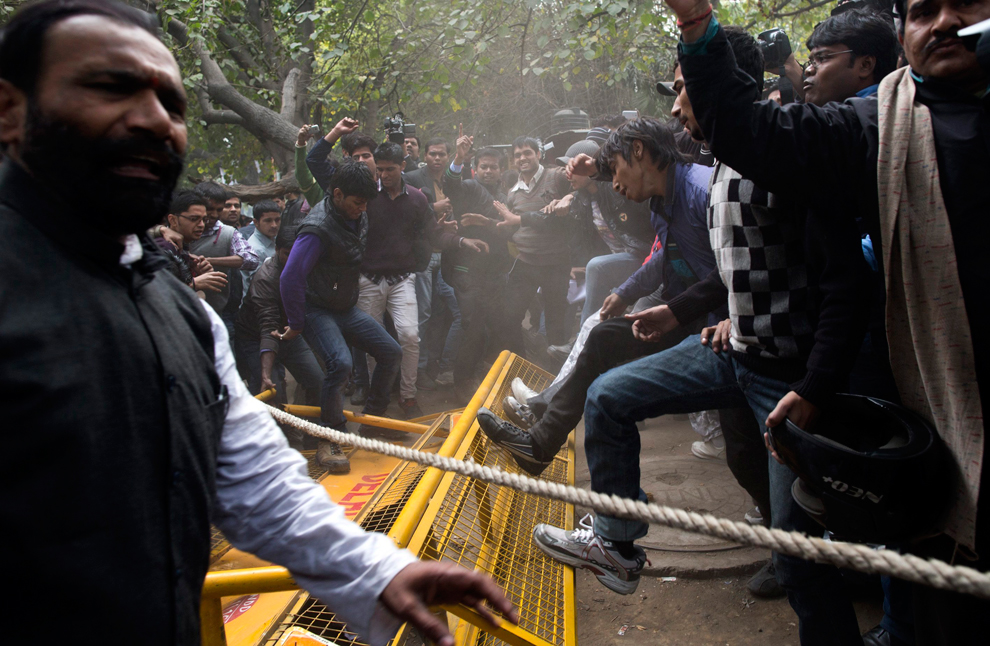 5
Demonstrators shout slogans as they jump over a police barricade that they seized during a protest in New Delhi, Dec. 30, 2012. (Ahmad Masood/Reuters)# 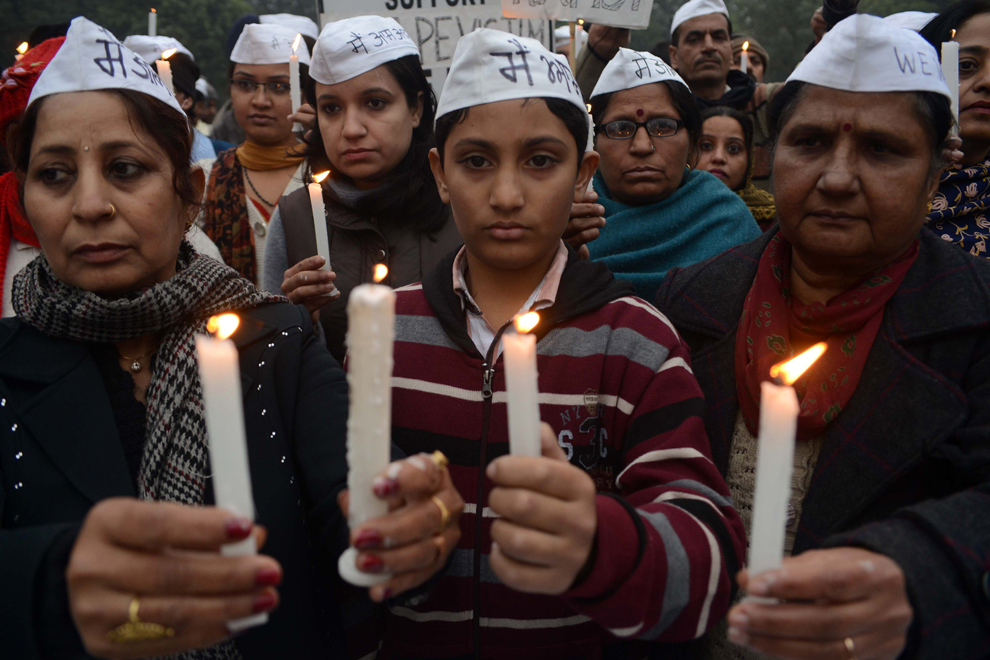 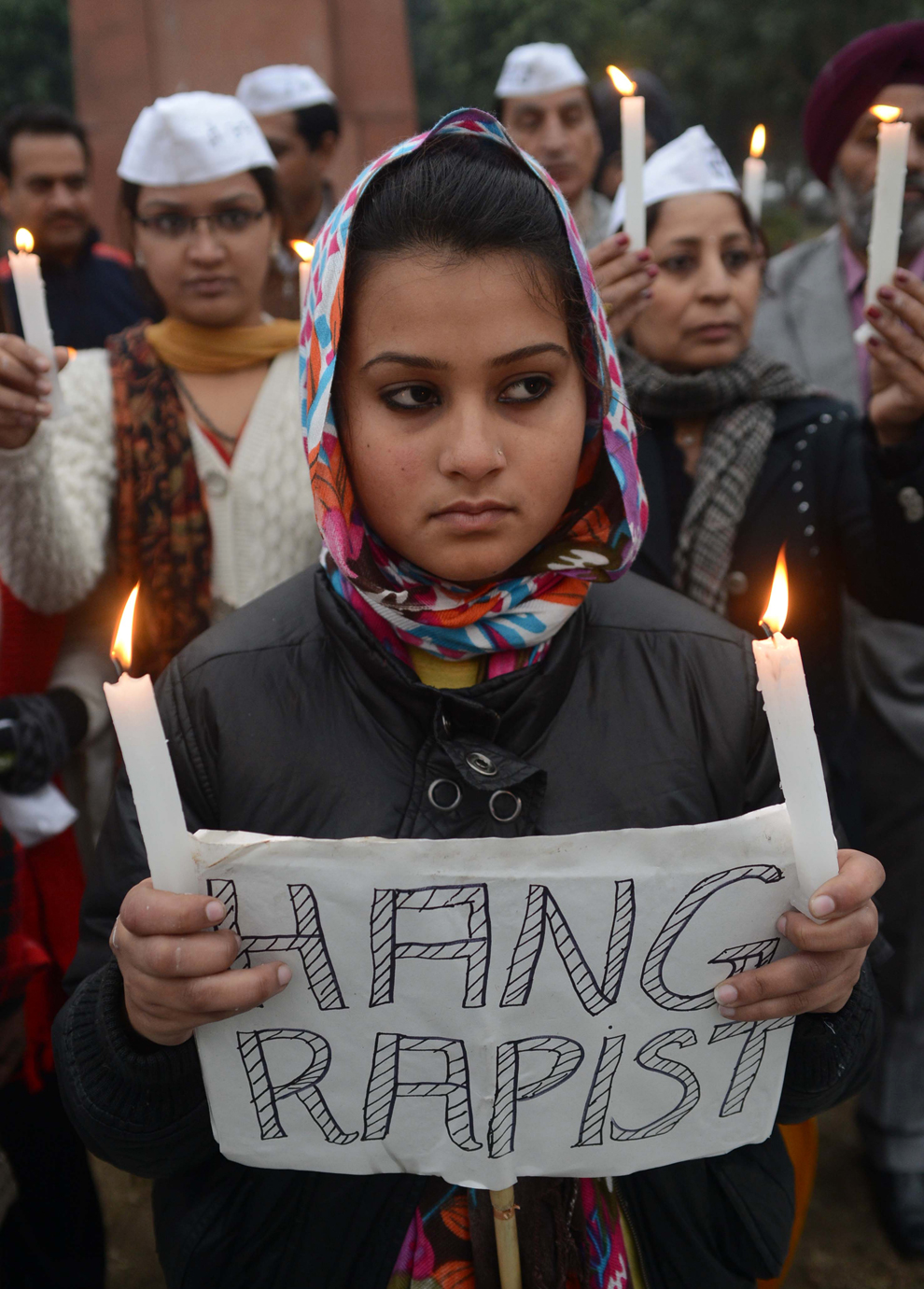 8
An Indian protester holds a candle during a protest demanding better security for women in New Delhi, Dec. 29, 2012, following the death of a rape victim from the Indian capital. Indian leaders appealed for calm and security forces headed off fresh unrest by turning New Delhi into a fortress after a student who was savagely gang-raped died in a Singapore hospital. Police threw a ring of steel around the centre of the Indian capital after news of the 23-year-old medical student's death was broken in the early hours by the Singapore hospital that had been treating her for the last two days. (Andrew Caballero-Reynolds/AFP/Getty Images)# 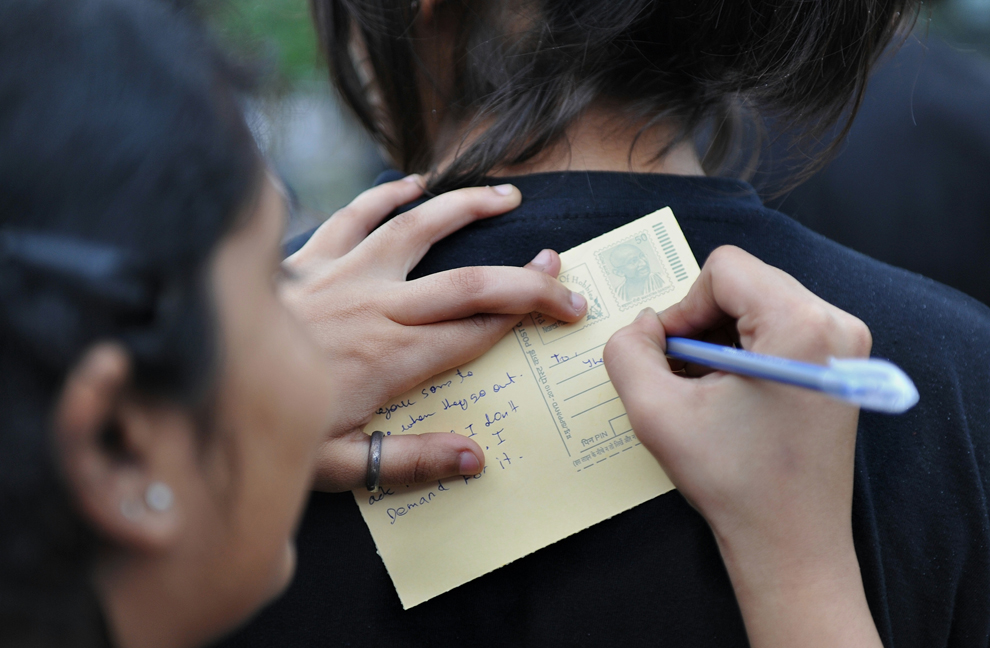 9
An Indian protester writes a message to the President of India on a post card during a demonstration in Bangalore, Dec. 29, 2012, after the death of a gang rape victim from the Indian capital New Delhi. Indian leaders appealed for calm. (Manjunath Kiran/AFP/Getty Images)# 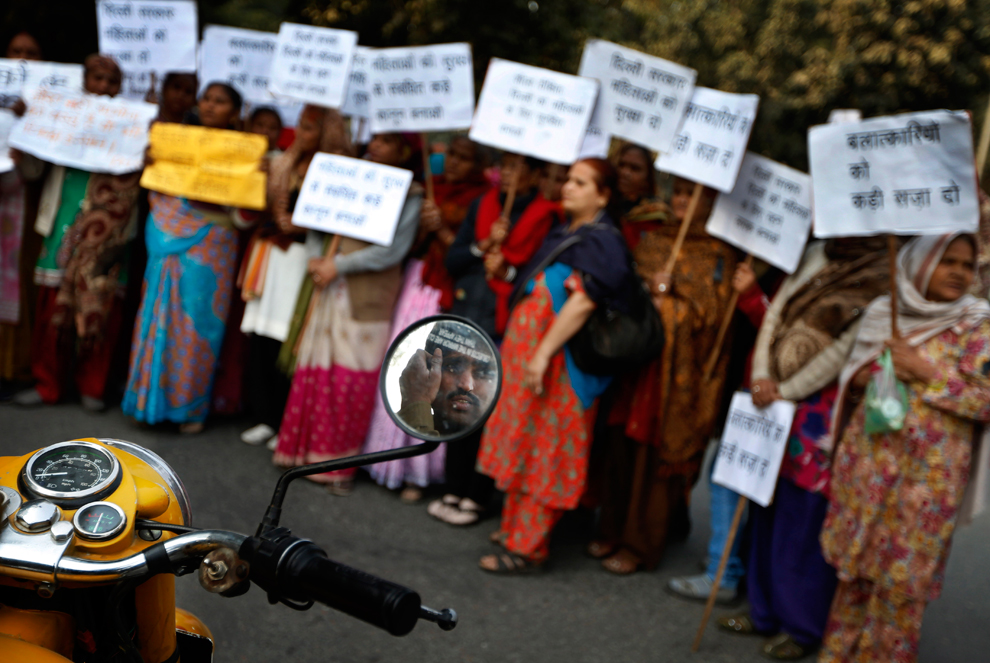 10
A policeman is reflected in the mirror of his motor bike as he keeps an eye on women who gathered to mourn the death of a gang rape victim in New Delhi, India, Dec. 29, 2012. Shocked Indians were mourning the death of the woman who was gang-raped and beaten on a bus in New Delhi in an ordeal that galvanized people to demand greater protection for women from sexual violence. (Saurabh Das/Associated Press)# 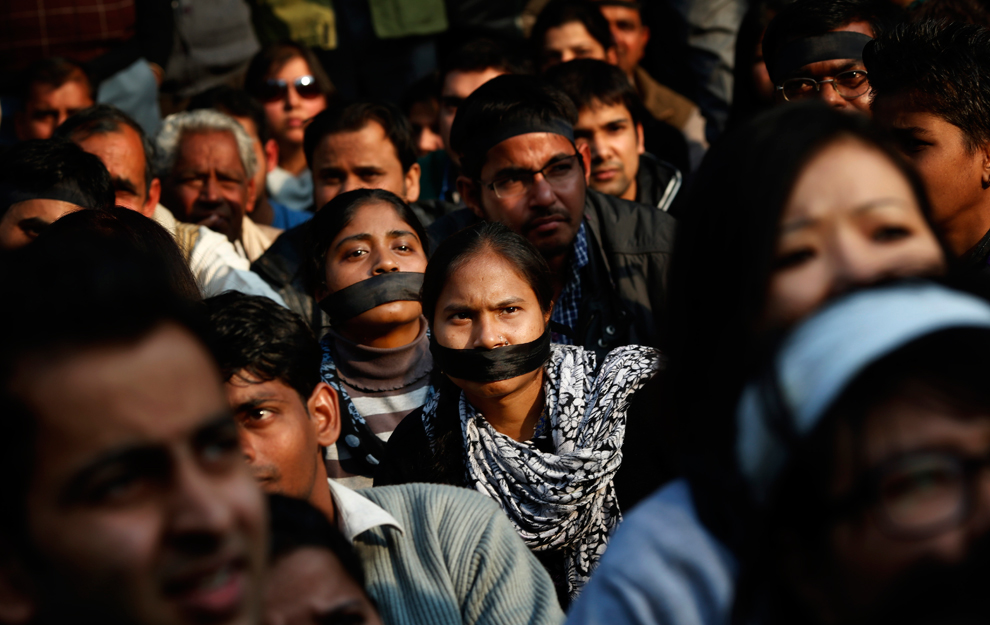 11
Women wear black bands across their faces as they join a gathering mourning the death of a gang rape victim in New Delhi, India, Dec. 29, 2012. (Saurabh Das/Associated Press)# 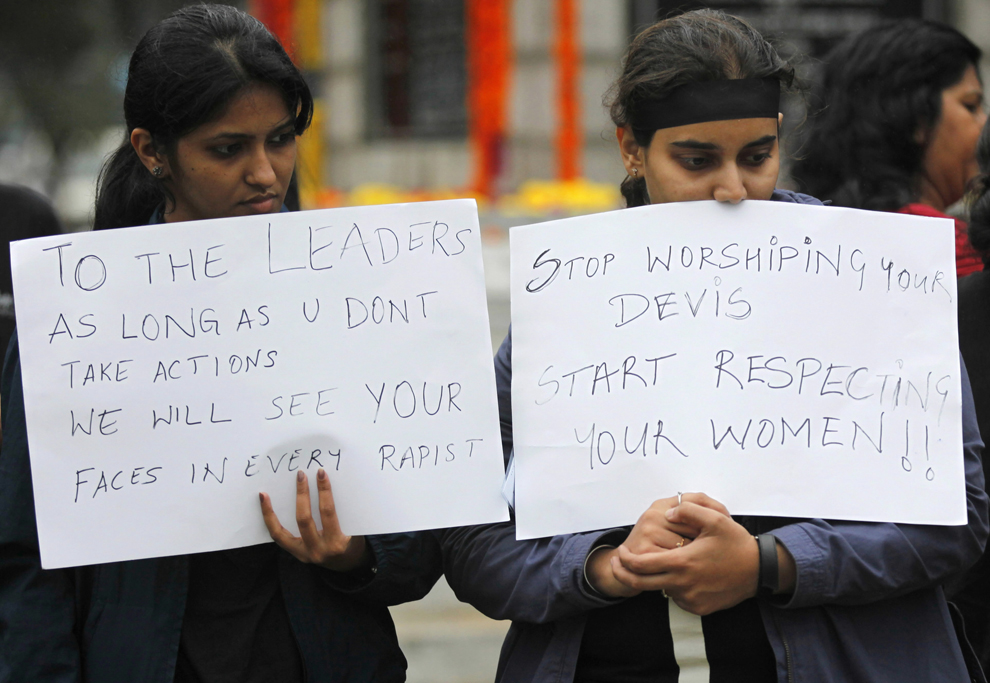 12
Indian students hold placards as they participate in a protest to mourn the death of a gang rape victim, in Bangalore, India, Dec. 29, 2012. Indian police charged six men with murder, adding to accusations that they beat and gang-raped the woman on a New Delhi bus in a case that shocked the country.(Aijaz Rahi/Associated Press)# 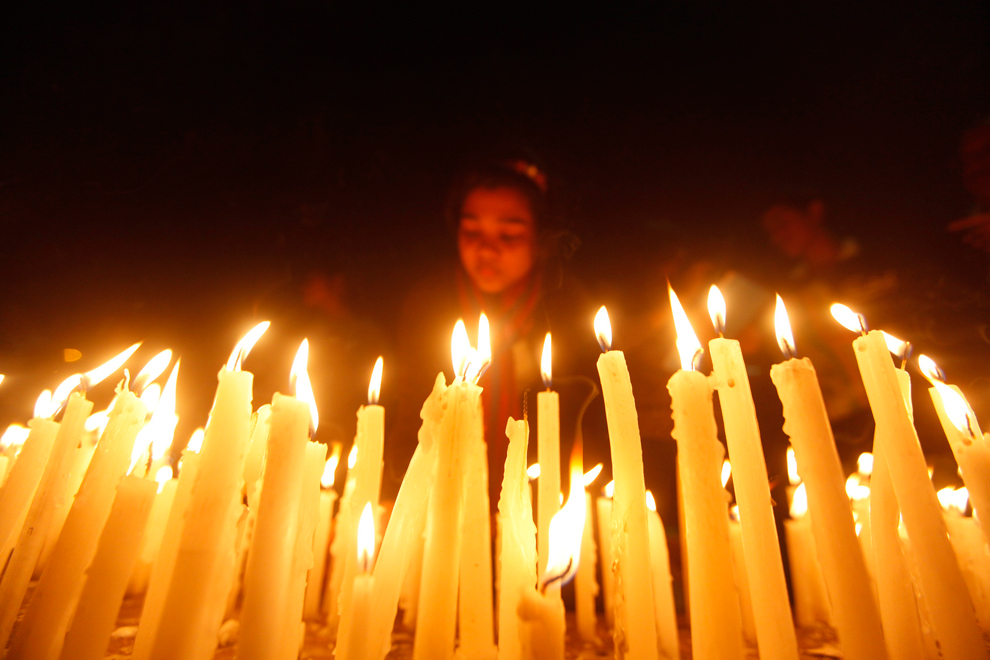 13
A girl lights candles during a candlelight vigil for a gang rape victim who was assaulted in New Delhi, in Kolkata, Dec. 29, 2012. A woman whose gang rape provoked protests and a rare national debate about violence against women in India died from her injuries, prompting promises of action from government that has struggled to respond to public outrage. (Rupak De Chowdhuri/Reuters)# 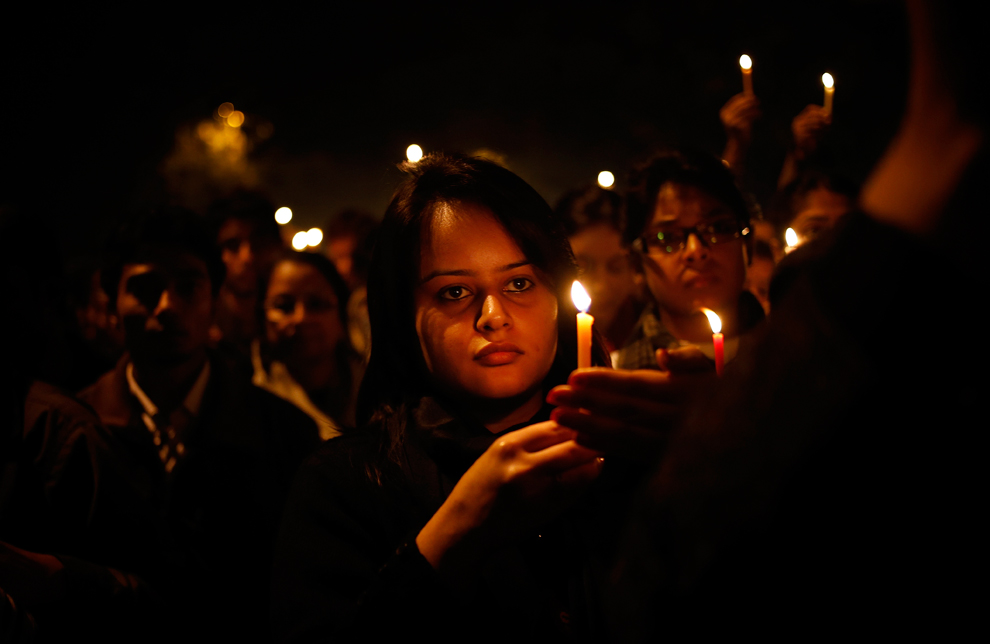 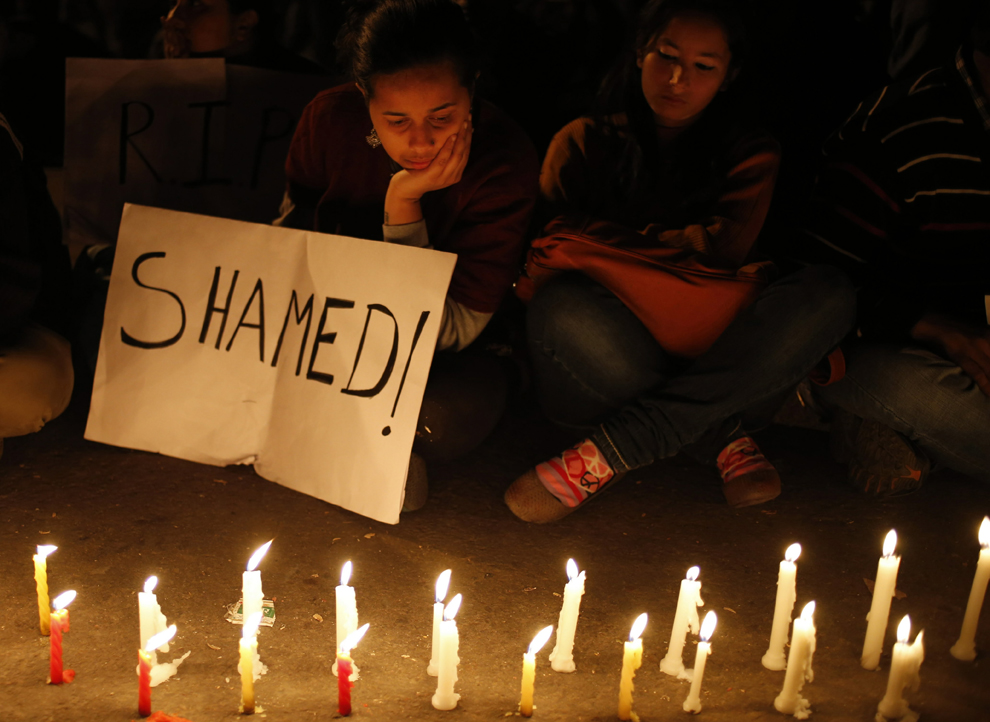 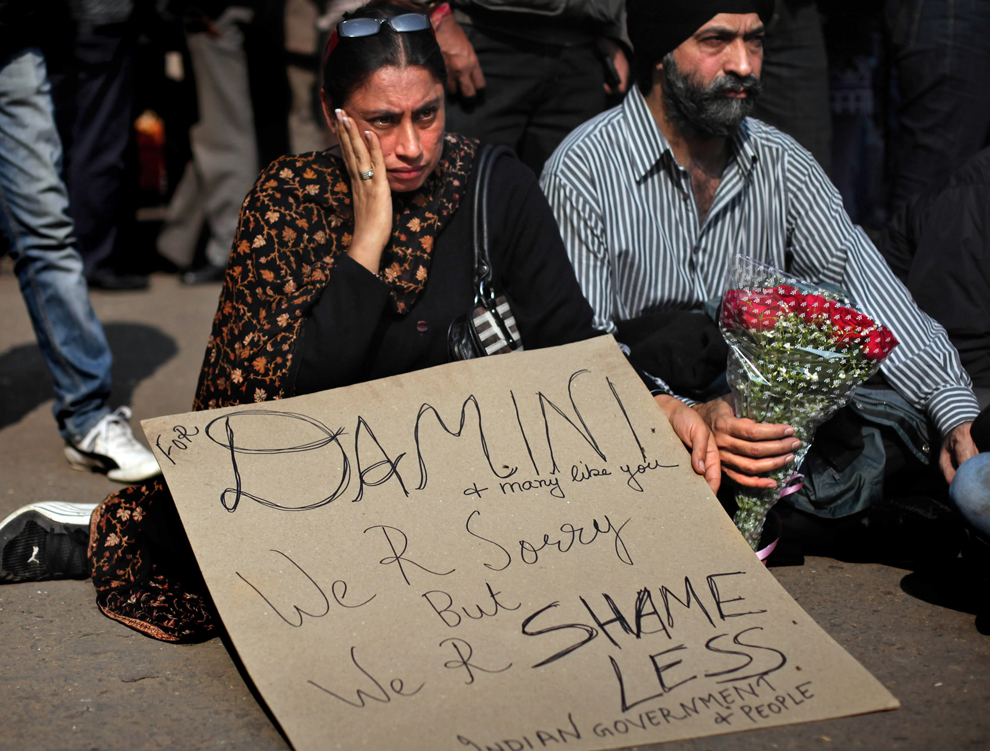 16
Indians attend a gathering to mourn the death of a rape victim in New Delhi, India, Dec. 29, 2012. Damini, seen on a banner, is a symbolic name given to the victim, taken from a Bollywood film of the same name about a woman's fight against society for justice for a rape victim.(Altaf Qadri/Associated Press)# 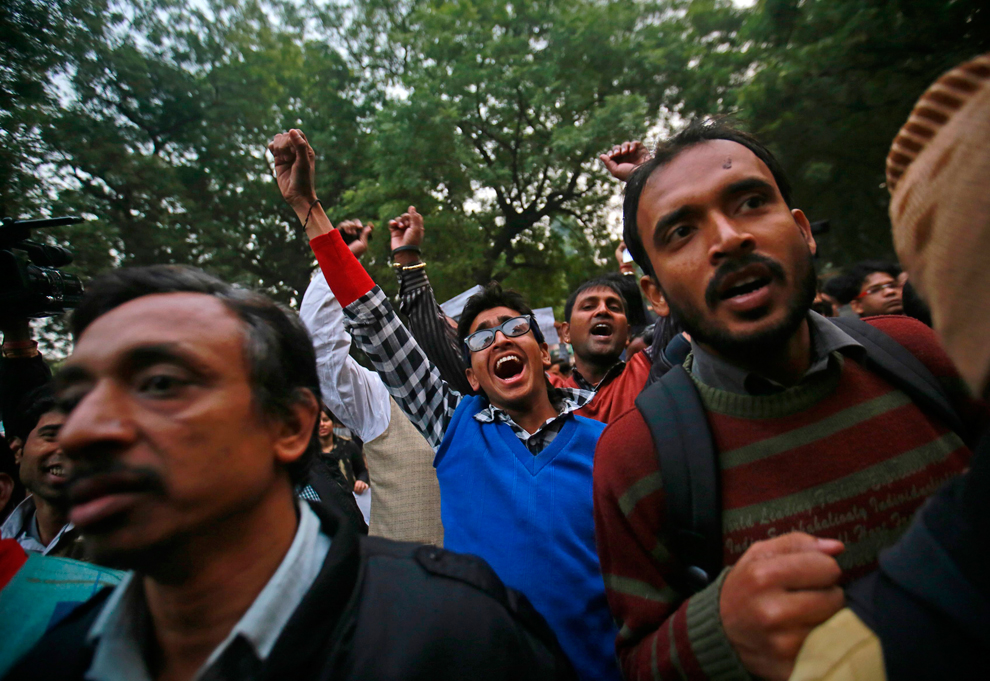 17
Demonstrators shout slogans during a protest in New Delhi, Dec. 29, 2012. Government promised action but has struggled to respond to the public outrage surrounding the case. (Danish Siddiqui/Reuters)# 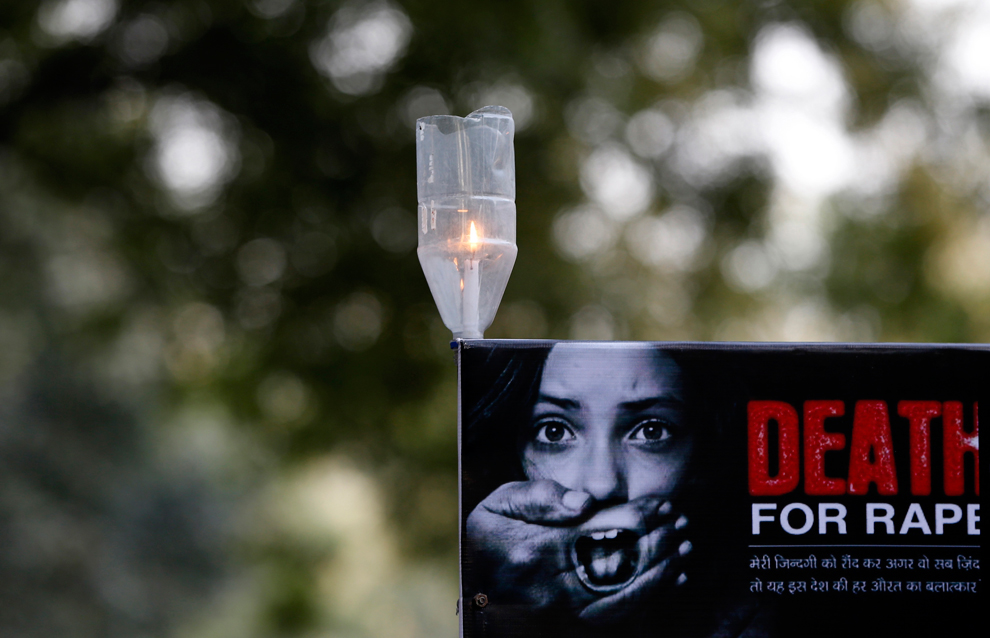 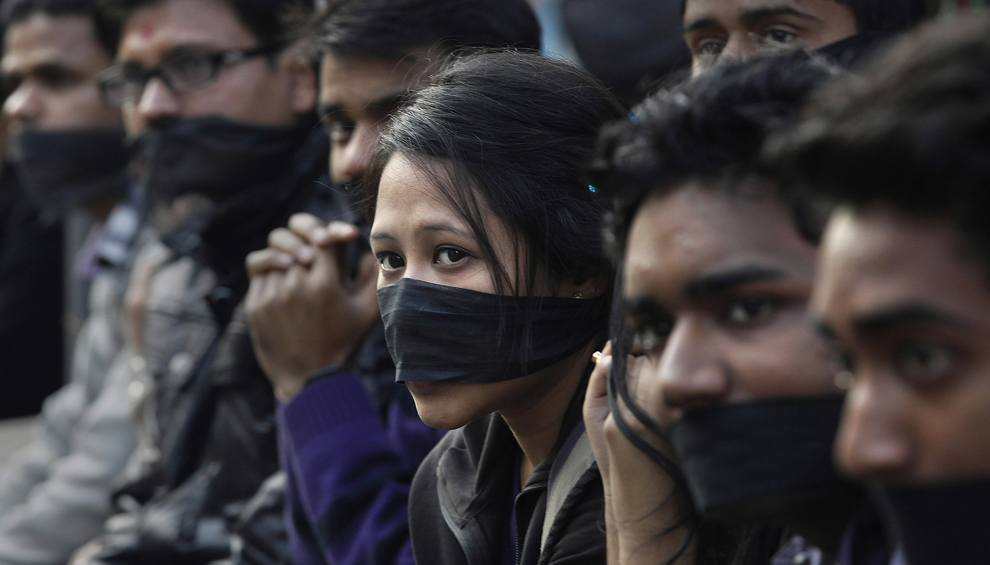 19
Indian students participate in a silent protest to mourn the death of a gang rape victim, in Gauhati, India, Dec. 29, 2012. Indian police charged six men with murder, adding to accusations that they beat and gang-raped the woman on a New Delhi bus. (Anupam Nath/Associated Press)# 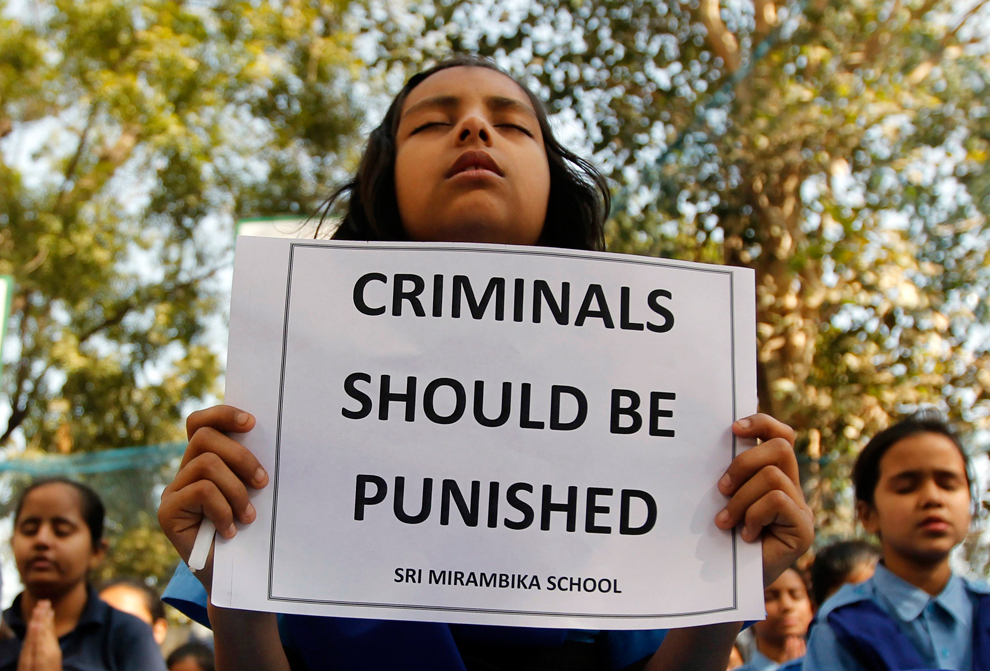 20
Schoolgirls, at a school in the western Indian city of Ahmedabad, pay homage to a rape victim who was assaulted in New Delhi, Dec. 29, 2012. (Amit Dave/Reuters)# 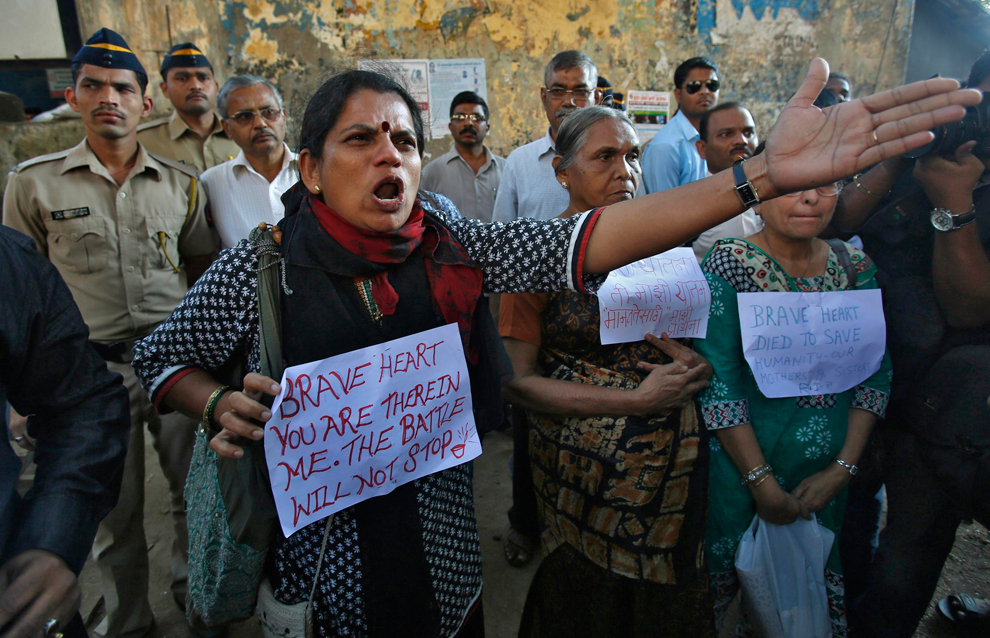 21
A demonstrator shouts at police officers as she takes part in a demonstration to mourn the death of a rape victim who was assaulted in New Delhi, in Mumbai, Dec. 29, 2012. (Vivek Prakash/Reuters)# 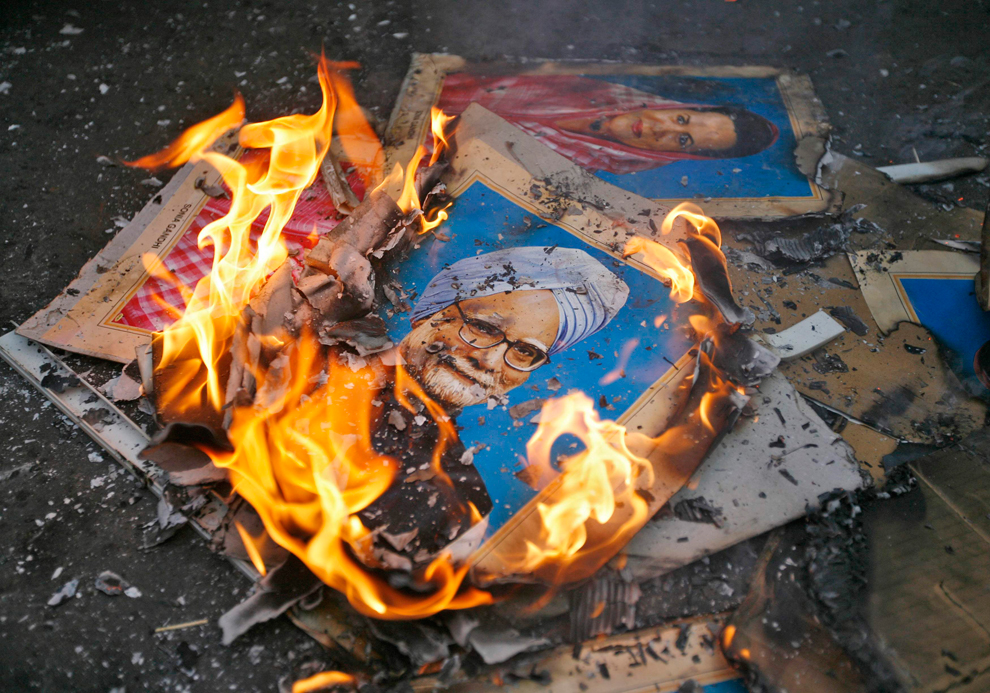 22
Portraits of India's Prime Minister, Manmohan Singh, and the chief of India's ruling Congress party, Sonia Gandhi, lie in flames after they were set alit by demonstrators during a protest in the western Indian city of Ahmedabad, Dec. 29, 2012. (Amit Dave/Reuters)# 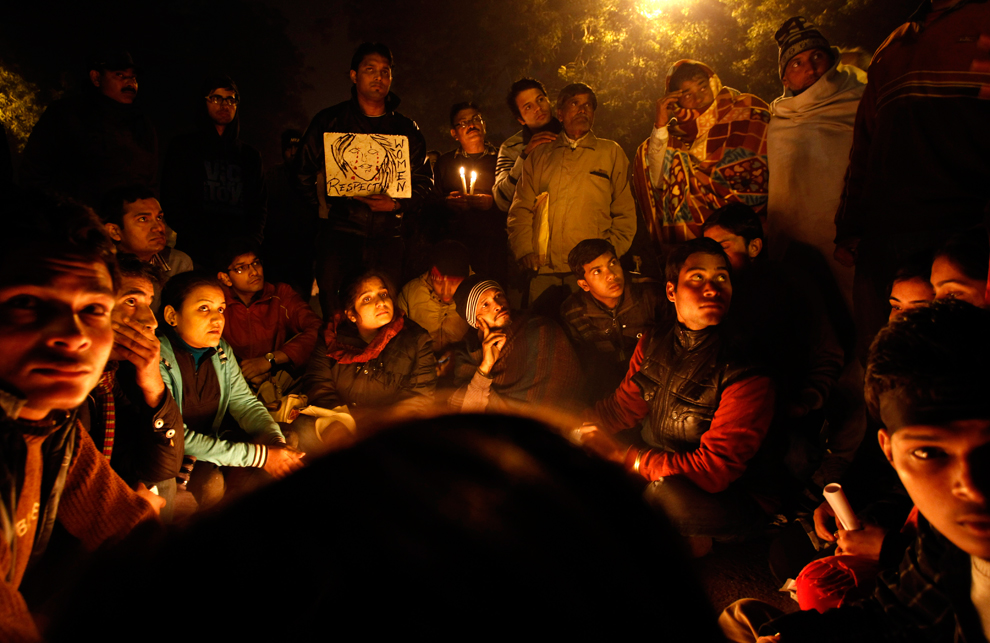 23
Indians gather for a candlelight vigil in memory of a gang-rape victim in New Delhi, India, Jan. 3, 2013. A group of men accused of raping a university student for hours on a bus as it drove through Indiaâs capital were charged with murder, rape and other crimes that could bring the death penalty. The attack on the 23-year-old, who died of severe internal injuries, provoked a debate across India about the routine mistreatment of the nationâs women and triggered daily protests demanding action. (Tsering Topgyal/Associated Press)# 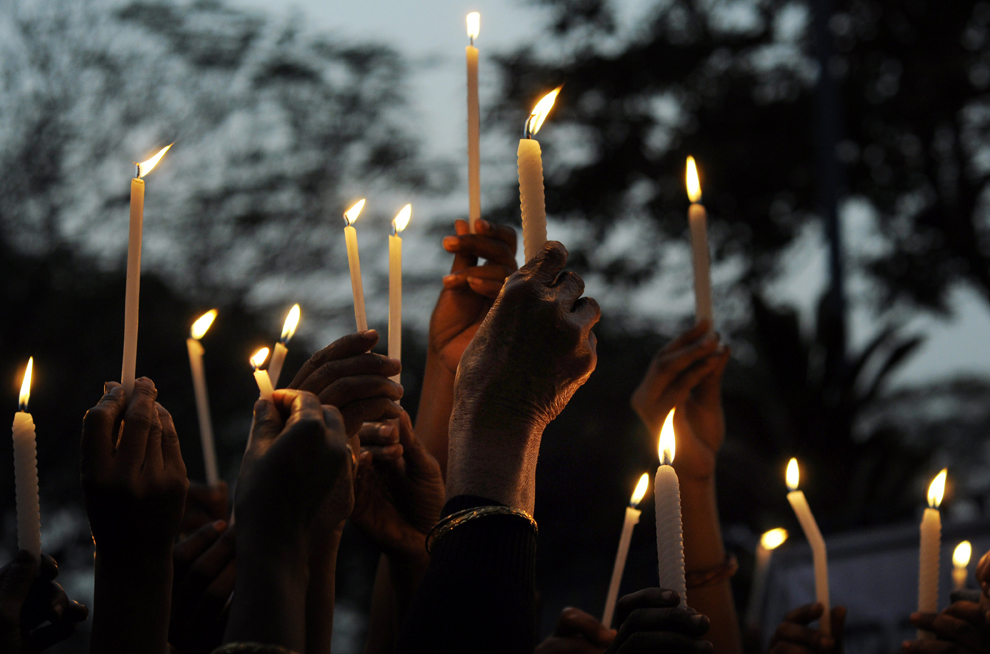 24
Indian activists take part in a candlelight vigil in Kolkata, Dec. 30, 2012, after the cremation ceremony for a gangrape victim. (Dibyangshu Sarkar/AFP/Getty Images)# 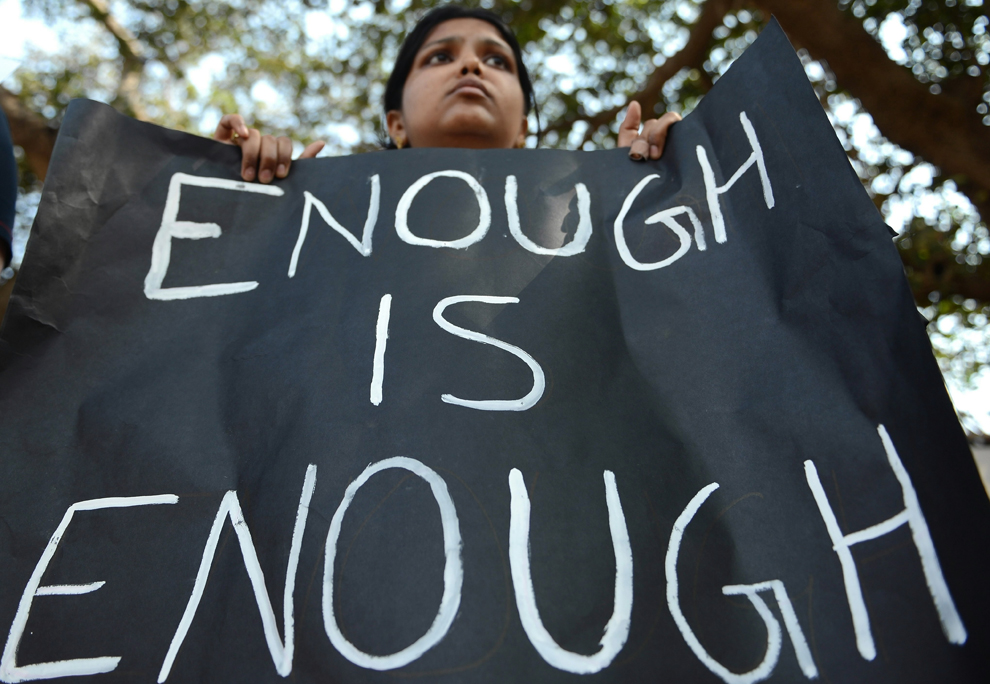 25
An Indian protestor holds a placard as she takes part in a protest to mourn the death of a gang-raped student, in Mumbai, Dec. 29, 2012. (Punit Paranjpe/AFP/Getty Images)#