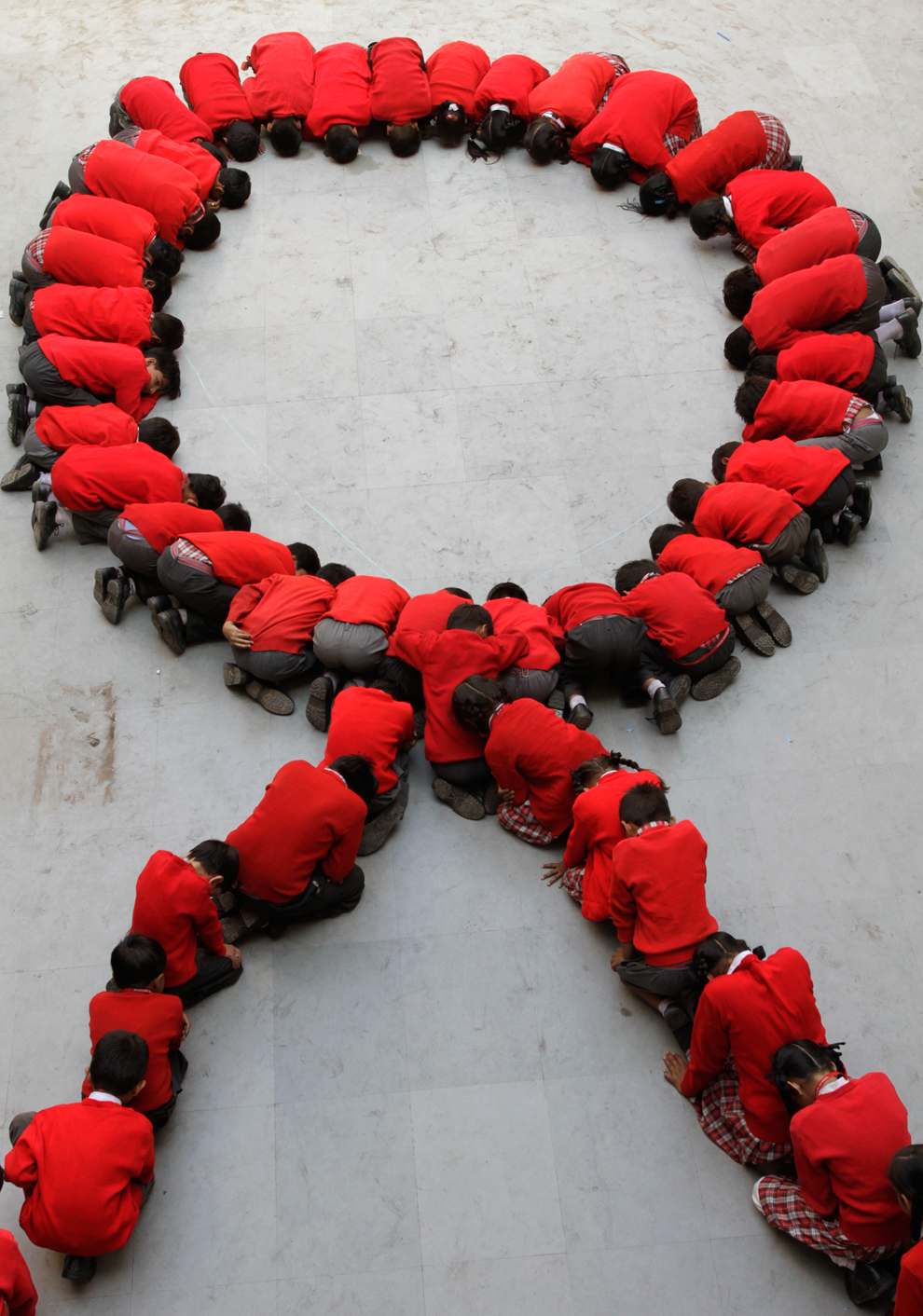 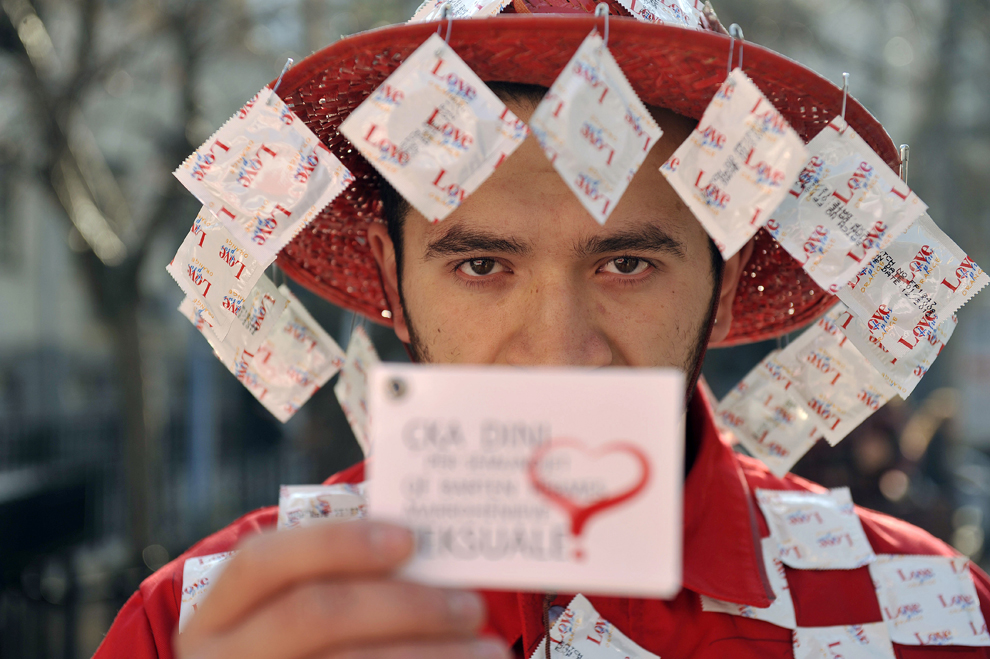 2
A Kosovo Albanian man wearing a costum decorated with condoms at the Mother Teresa Square, Dec. 1, 2011, in Pristina, as citizens gathered to mark World AIDS Day. First identified in 1981, AIDS has claimed at least 25 million lives, although the annual toll is falling sharply from the peak of the pandemic in response to drug treatment. In Europe, 27,116 new cases of HIV infections were reported last year, an increase of around 4 percent from 2009. (Armend Nimani/AFP/Getty Images) # 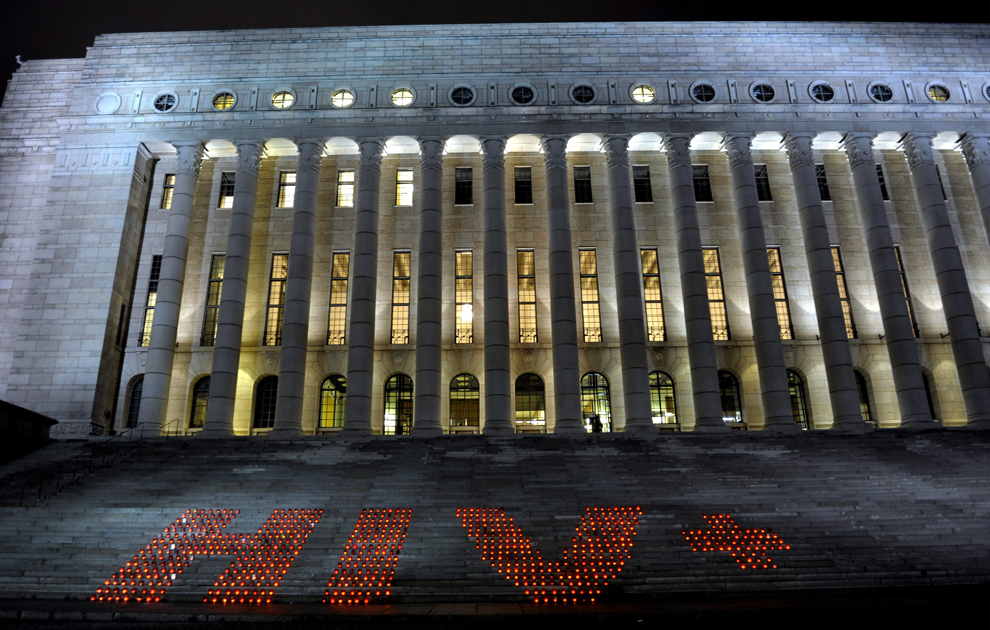 3
An "HIV+" symbol made with candles on the steps of the Finnish Parliament in Helsinki marks World AIDS Day. (Heikki Saukkomaa/AFP/Getty Images) # 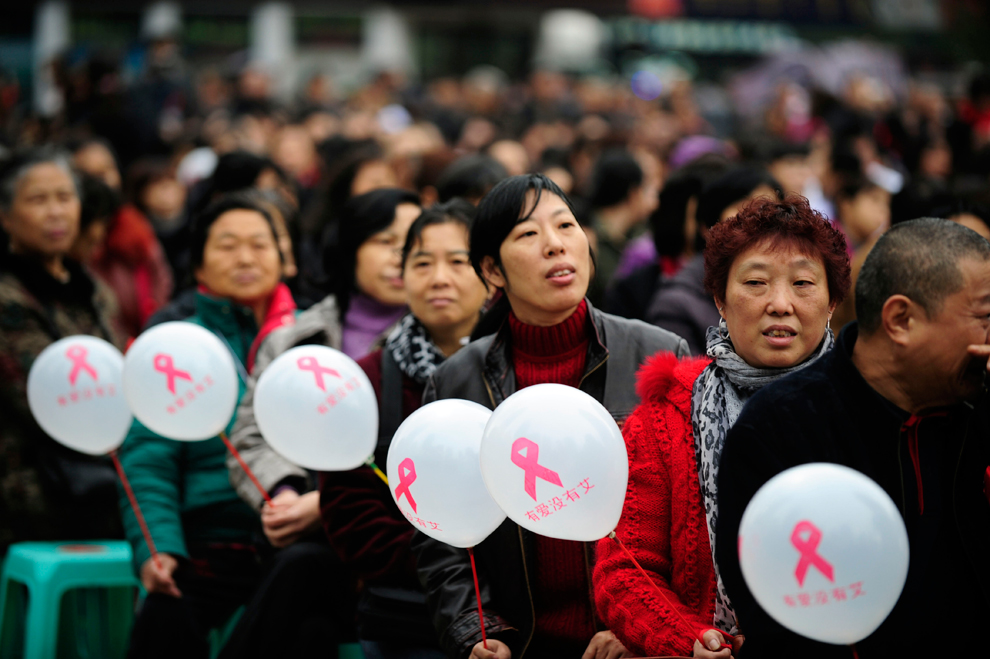 4
Chinese residents take part in an AIDS awareness program to mark World's AIDS Day in southwest China's municipality of Chongqing, Dec. 1, 2011. The official Xinhua news agency said the number of people living with HIV is predicted to hit 780,000 by the end of 2011, but campaigners say the figure could be much higher, as HIV/AIDS sufferers have long been stigmatised in China. Increased government education has helped raise awareness. (Stringer/AFP/Getty Images) # 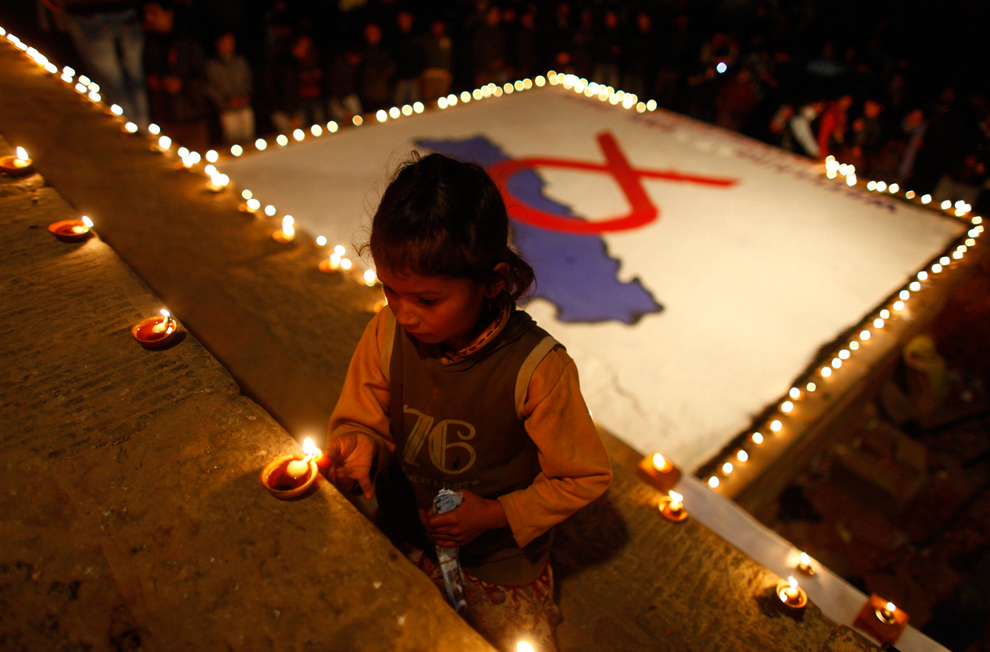 5
A Nepalese child lights candles in front of a painting that depicts a map of Nepal with a red ribbon, at an event to mark World AIDS Day in Katmandu, Nepal, Dec. 1, 2011. The World Health Organization established World AIDS Day in 1988 to further global awareness and put a focus on prevention.(Niranajan Shrestha/Associated Press) # 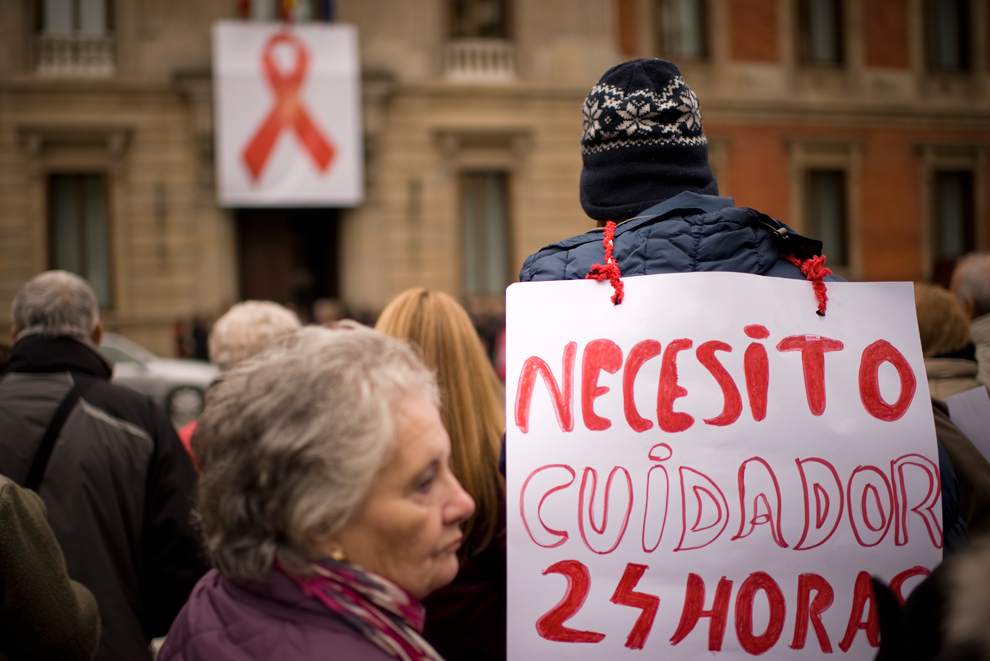 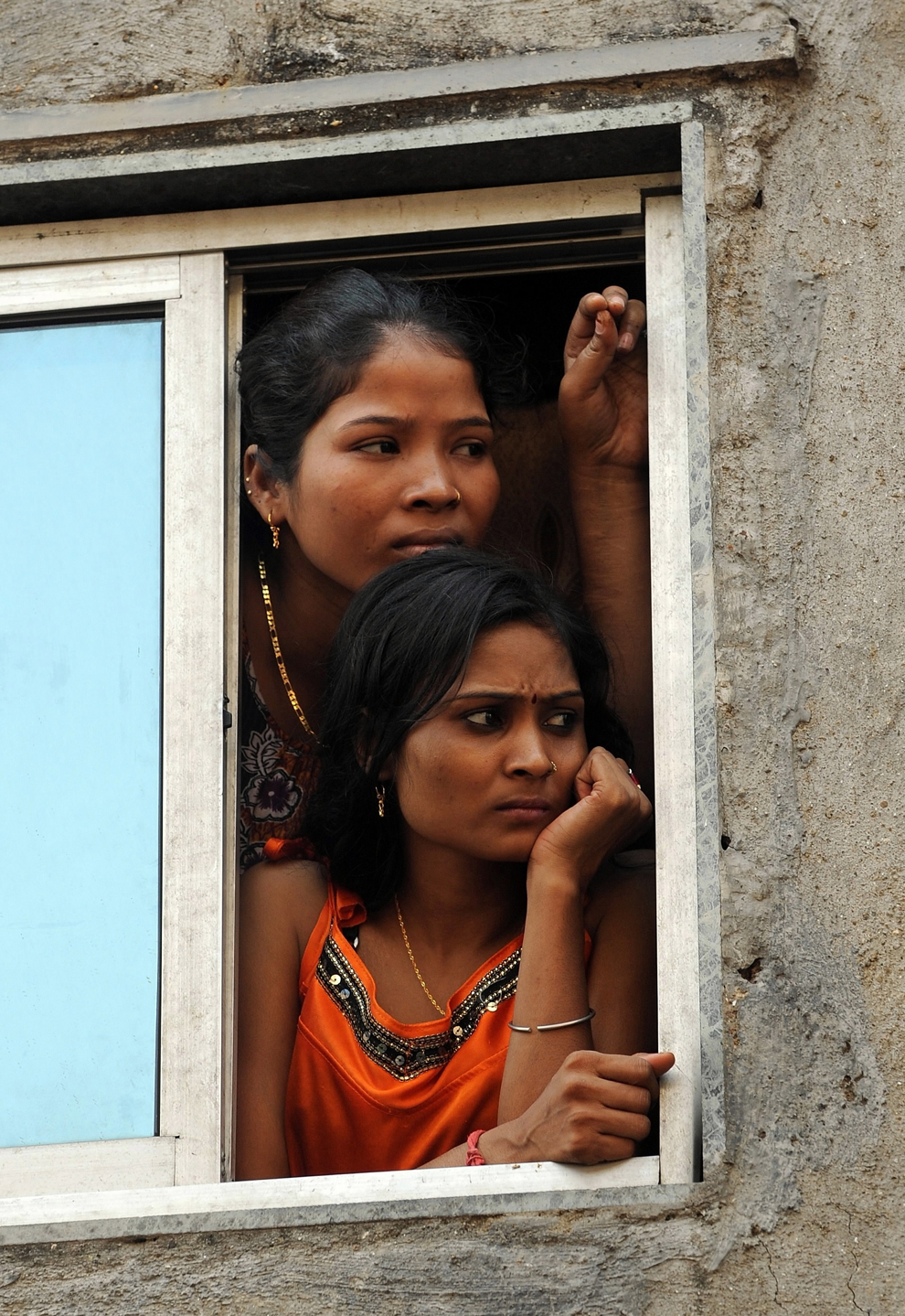 7
Sex workers watch a skit on HIV-AIDS awareness on World AIDS Day in the city's red light district of Kamathipura in Mumbai on Dec. 1, 2011. The Indian government estimates that some 2.5 million Indians are living with HIV. Tens of thousands of HIV-affected households in Asia are facing "irreversible poverty" because of the cost of living with the disease, with women and children hardest hit, a UN report said. In countries like India, Indonesia and Vietnam, HIV-affected families spend up to three times more on healthcare costs than the average, according to the report, which examined some 17,000 households across Asia. (Indranil Mukherjee/AFP/Getty Images) # 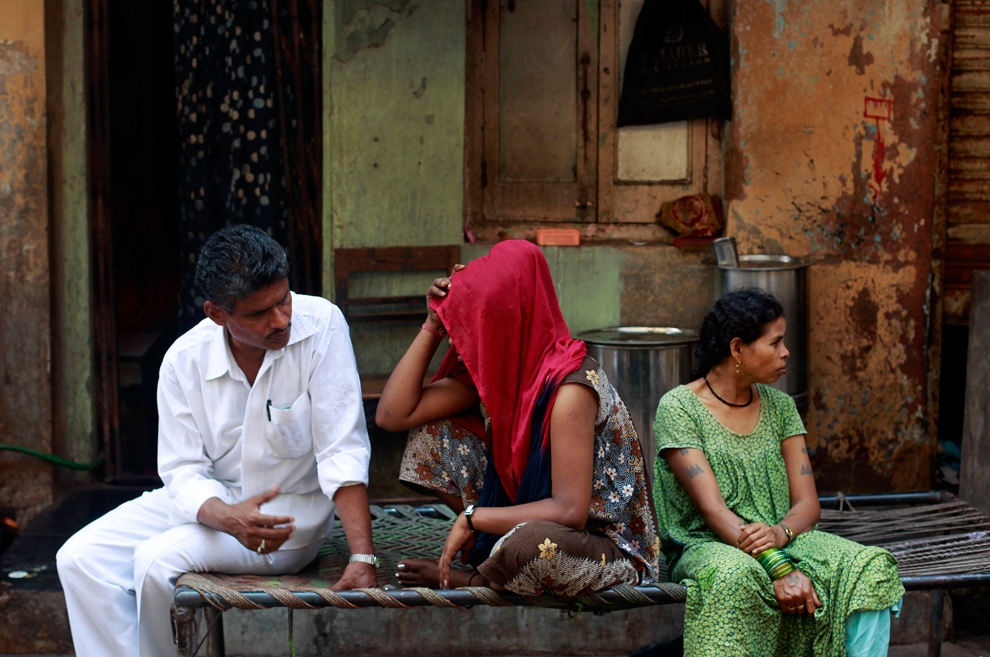 8
A man speaks with a sex worker during a World AIDS Day function in the red light area in Mumbai, India, Dec. 1, 2011. The World Health Organization established World AIDS Day in 1988 to further global awareness and put a focus on prevention. (Rafiq Maqbool/Associated Press) # 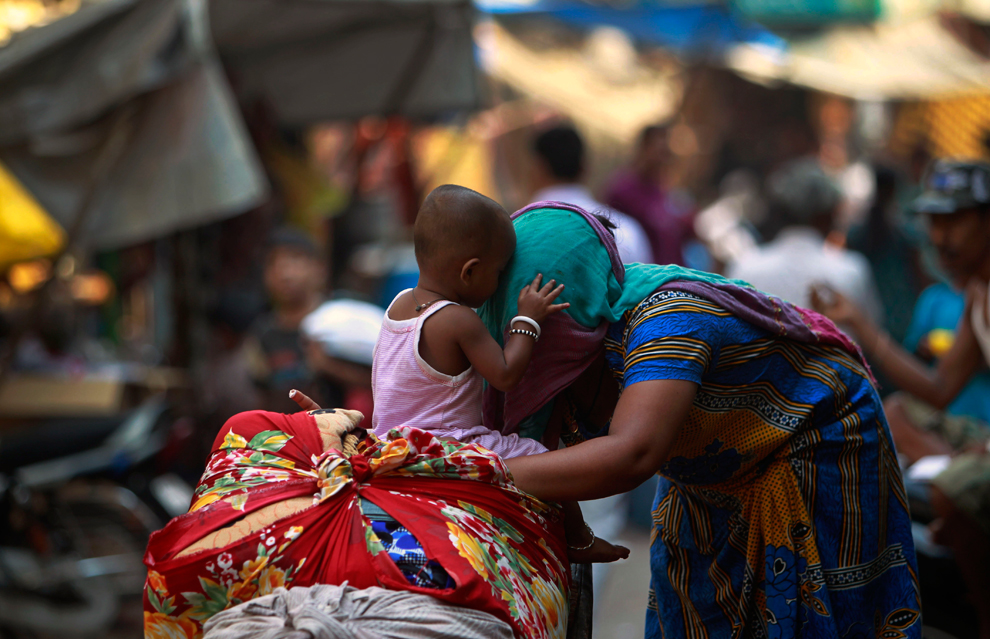 9
An Indian sex worker plays with a child during a World AIDS Day function in a red light area in Mumbai, India, Dec. 1, 2011.(Rafiq Maqbool/Associated Press) # 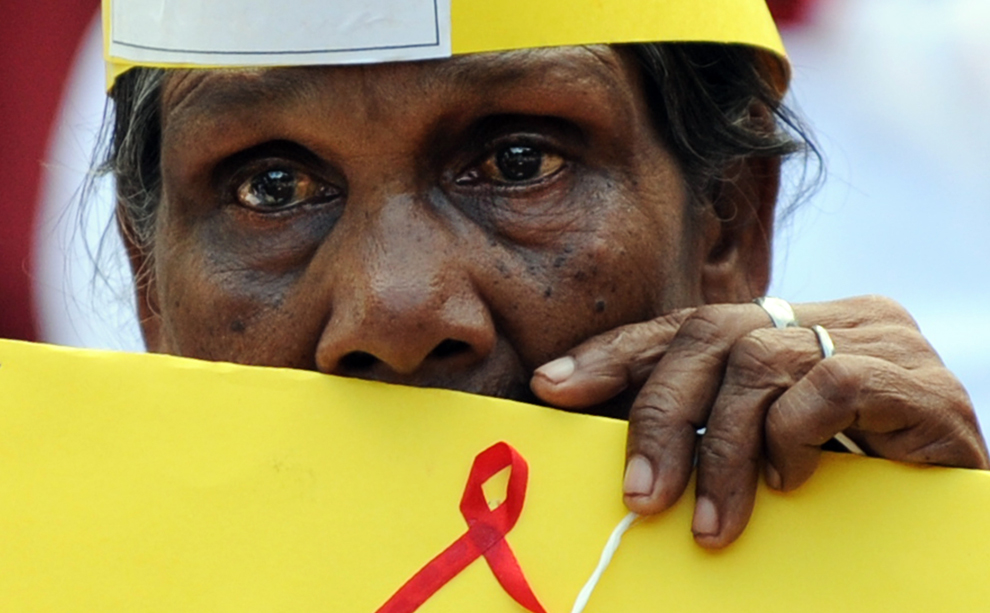 10
An activist, holding a placard marked with a symbolic red ribbon, takes part in a gathering to mark World AIDS Day in Colombo, Dec. 1, 2011. Some 1,161 HIV positive cases have been identified in the country between 1987 and the end of September 2011. (Ishara S.Kodikara/AFP/Getty Images) # 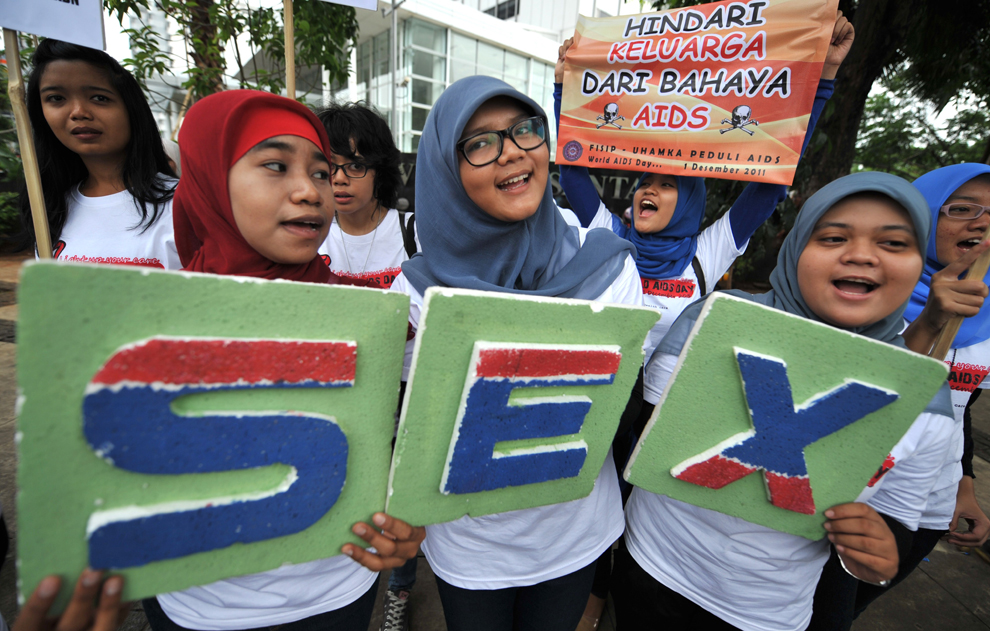 11
Indonesian students display the word 'sex' during a campaign in Jakarta, Dec. 1, 2011 to avoid HIV/AIDS caused by sexual intercourse. The HIV/AIDS awareness campaign is held across the world to mark World AIDS Day, with the theme of "Getting to Zero" this year. (Bay Ismoyo/AFP/Getty Images) # 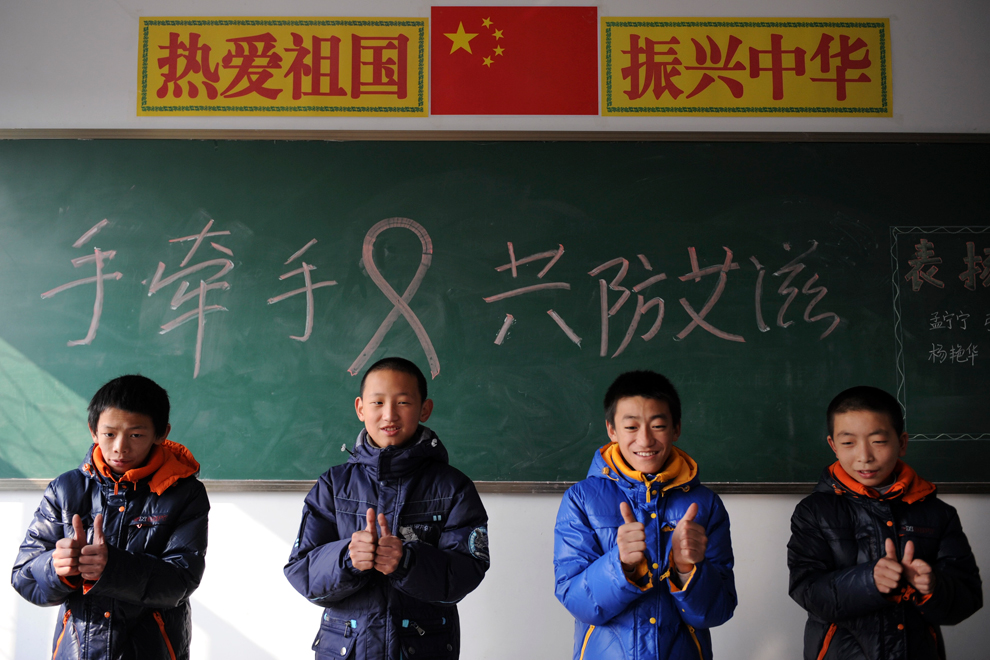 12
Boys infected with the AIDS virus participate in a classroom performance at a special school for AIDS-infected children in Linfen, in northern China's Shanxi province. Chinese characters on the chalkboard read "Hand in hand to prevent AIDS." (Associated Press) # 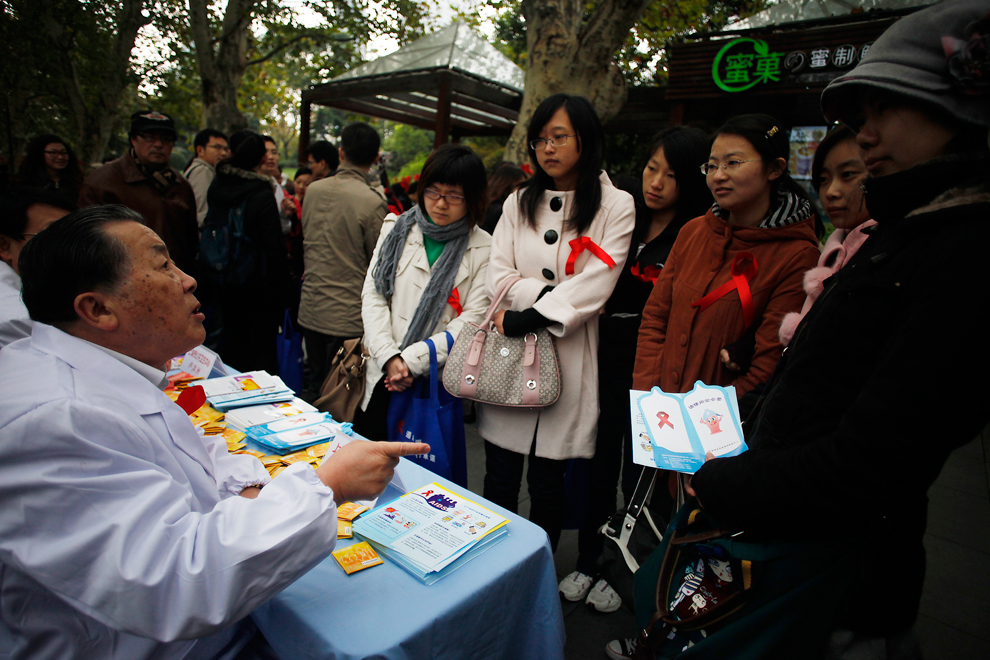 13
A medical doctor talks about AIDS to guests during an AIDS awareness event held by the local community on International AIDS Day, Dec. 1, 2011 in Shanghai, China. (Eugene Hoshiko/Associated Press) #

14
A woman attaches a condom to the board during an AIDS campaign to increase awareness of the sexually-transmitted disease in Seoul, South Korea, Dec. 1, 2011. (Lee Jin-man/Associated Press) # 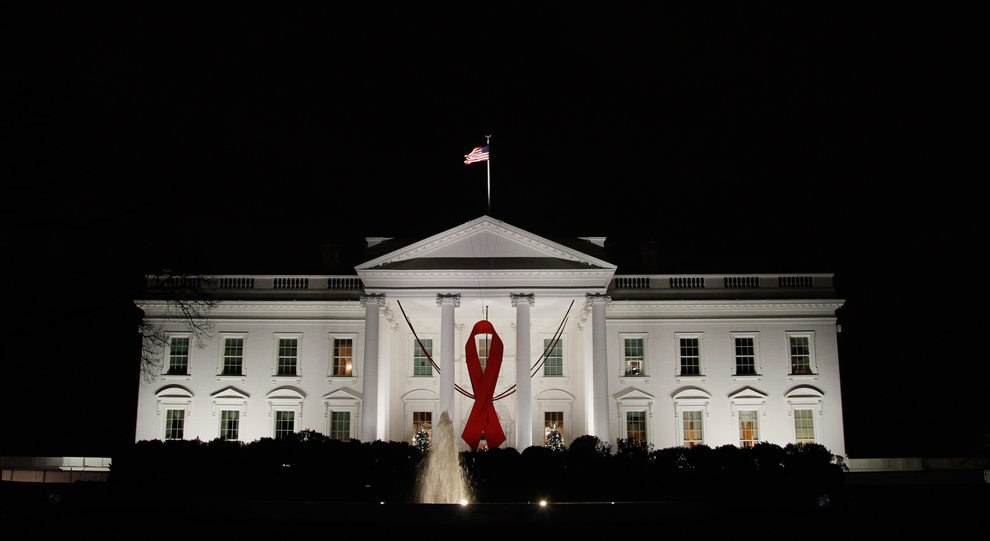 15
A red ribbon is displayed on the North Portico of the White House, Nov. 30, 2011, in Washington, D.C. December is AIDS Awareness Month. (Haraz N. Ghanbari/Associated Press) # 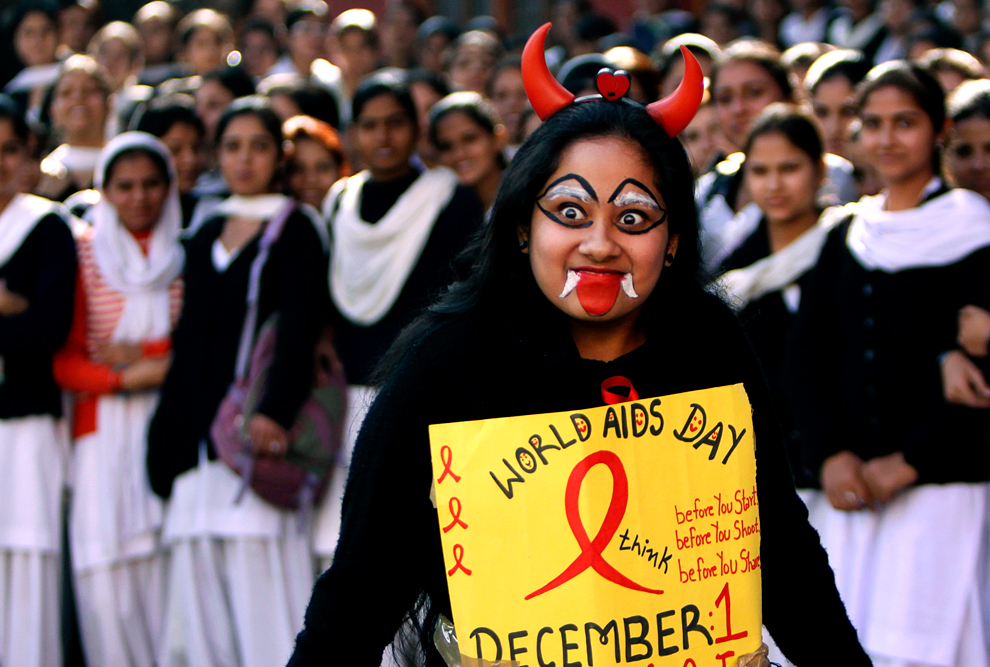 16
An Indian college student is dressed in a costume during an event on the eve of World AIDS Day in Jammu, India, Nov. 30, 2011. More than 2 million people in India suffer from HIV/AIDS. (Channi Anand/Associated Press) # 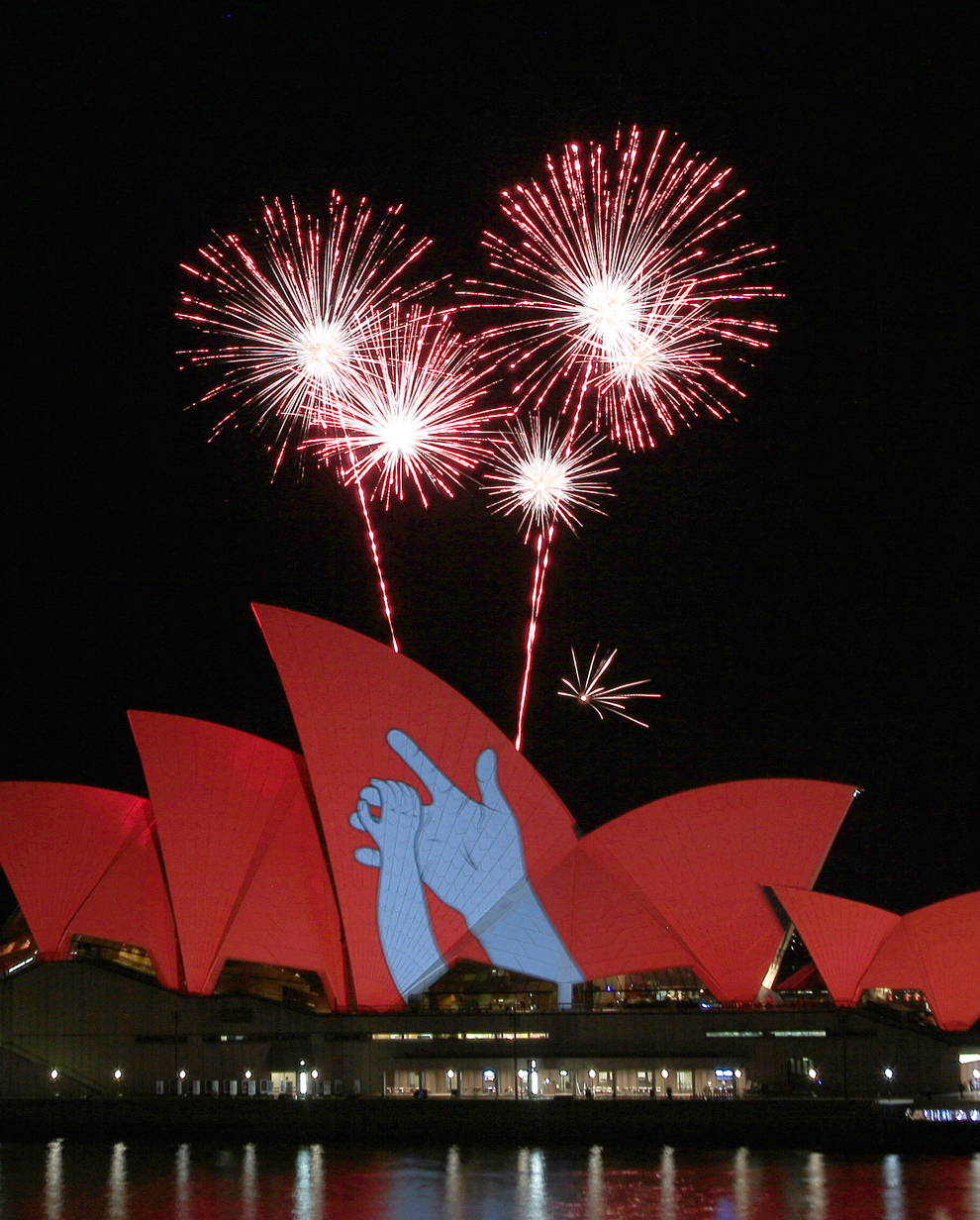 17
Fireworks burst behind the Sydney Opera House that is bathed in red light in Sydney, Australia, Nov. 30, 2011, as as part of a global campaign to create an AIDS-free generation by 2015. Over 50 landmarks and iconic monuments around the world will turned red on Dec. 1, in support of the campaign. (Rick Rycroft/Associated Press) # 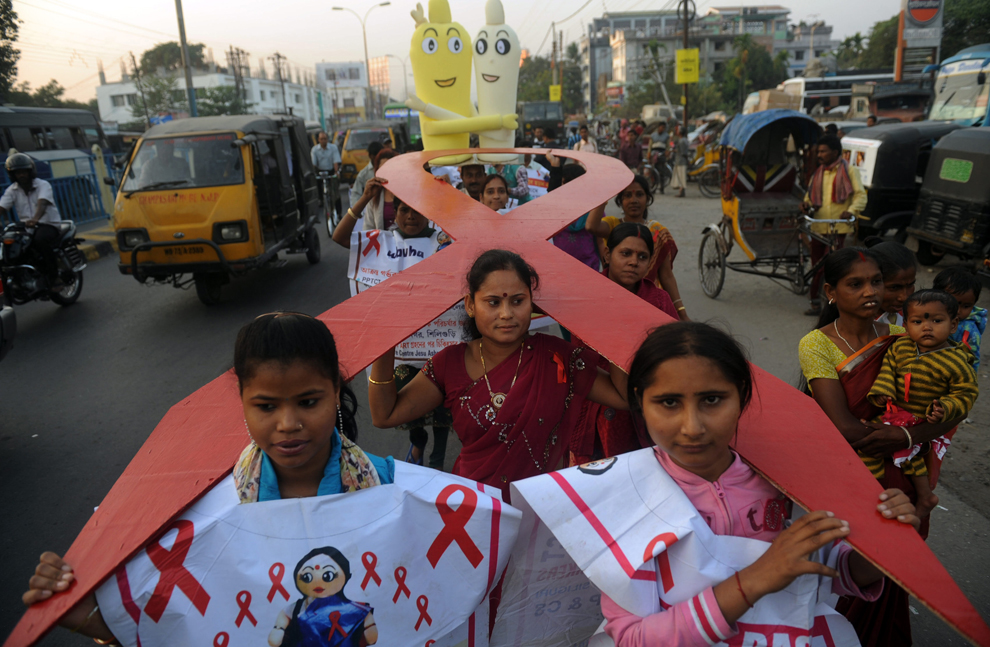 18
Members of the West Bengal Voluntary Health Association (WBVHA) carry a cutout of a red ribbon followed by condom caricatures during an AIDS awareness rally in Siliguri, November 30, 2011. The theme this year is "Getting to Zero". (Diptendu Dutta/AFP/Getty Images) # 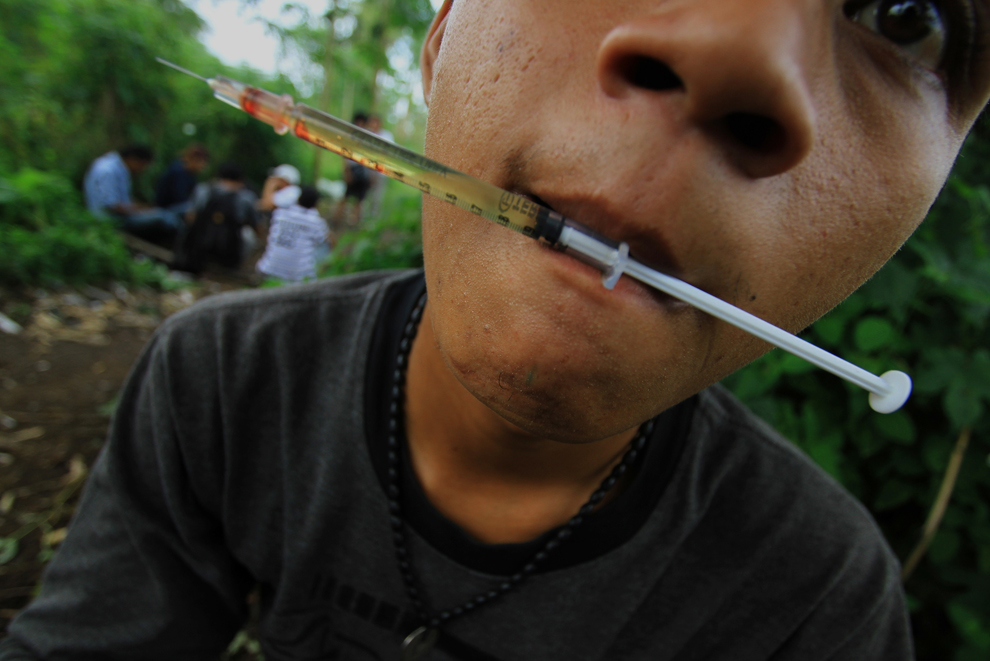 19
A heroin drug user holds a syringe at a park in Medan city in Sumatra island. Cordia-Caritas Medan, a non-government organization, focuses rehabilitation efforts on heroin drug users thru their needle exchange and recovery program as part of its anti-HIV/AIDS campaign in Indonesia. The highest rate of HIV/AIDS infection is a result of injecting drug users. The latest National AIDS Commission report estimated that there were 227,700 people living with HIV/AIDS in Indonesia in 2007, a figure it said would double to 501,400 by 2014 making the AIDS epidemic in the country one of the fastest growing in Asia. (Sutanta Aditya/AFP/Getty Images) # 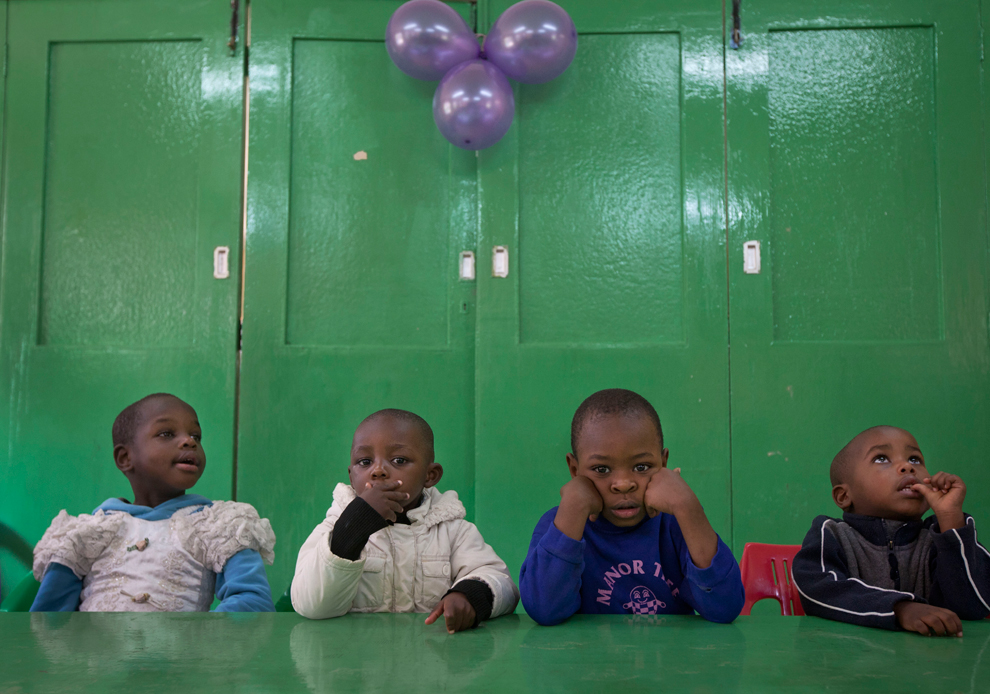 20
Children attend a class at the Nyumbani Children's Home for children with HIV, in Karen on the outskirts of Nairobi, Kenya, Nov. 30, 2011. The orphanage, which is heavily reliant on foreign donations, cares for over 100 children with HIV whose parents have died of the disease. The program provides housing, care, and antiretroviral medicine to stem the progress of the disease. (Ben Curtis/Associated Press) # 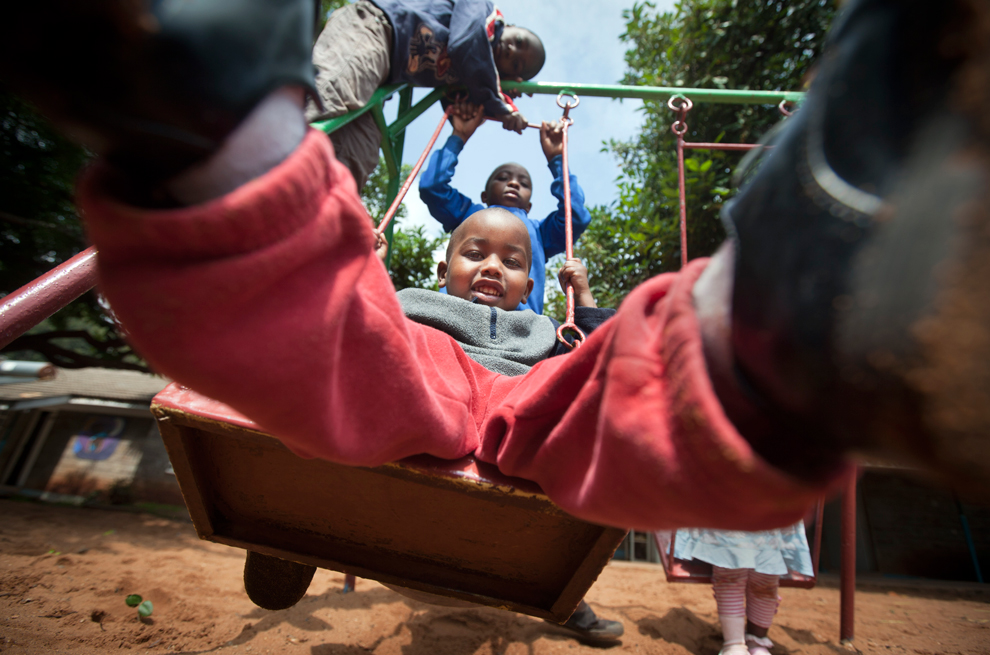 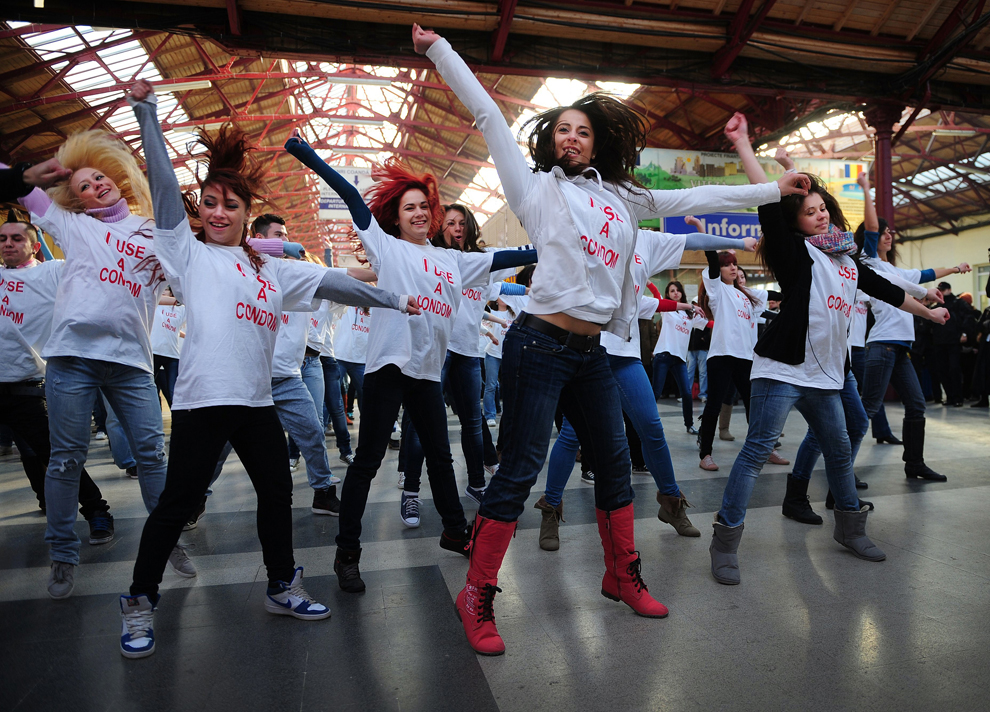 22
Romanian volunteers dance at the Gara de Nord railway station during a flash mob, a day before World AIDS Day in downtown Bucharest, Nov. 30, 2011. According to the Romanian National Union of HIV Infested Persons (UNOPA), over 10, 000 people lived with HIV in Romania, among them 7,000 are young people who were infected in 1988-1990, victims of the Communist-era health care system.(Daniel Mihailescu/AFP/Getty Images) #

23
Primary school students present red ribbons during an event on the eve of the World AIDS Day in Wuyuan, in southern China's Jiangxi province, Nov. 30, 2011. China will have about 780,000 people infected with the AIDS virus by the end of this year, state media reports, with most having contracted it through heterosexual sex. (Associated Press) # 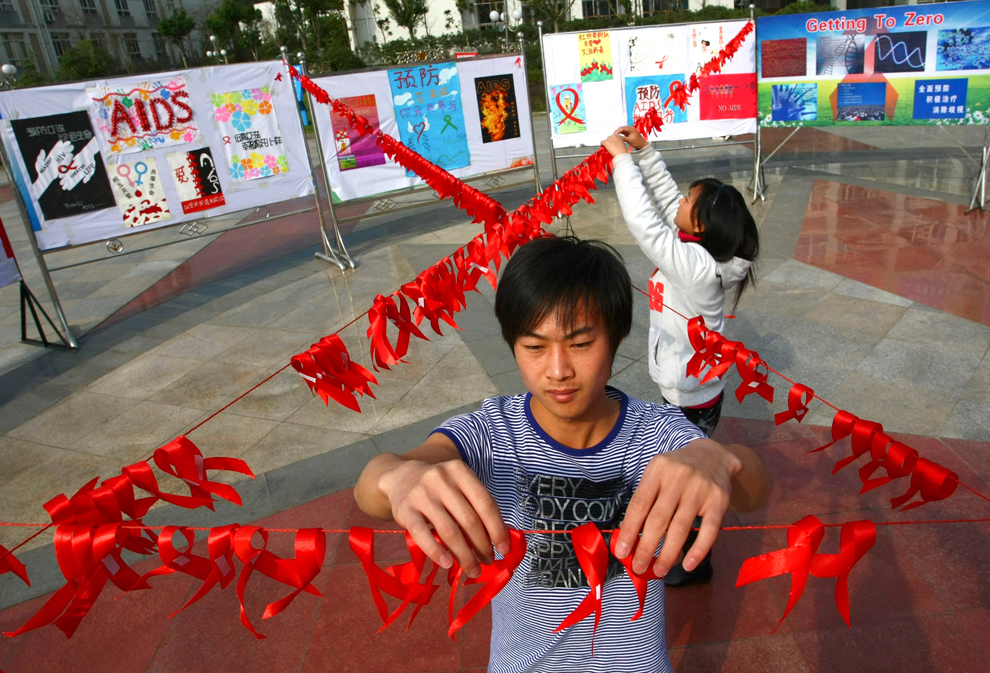 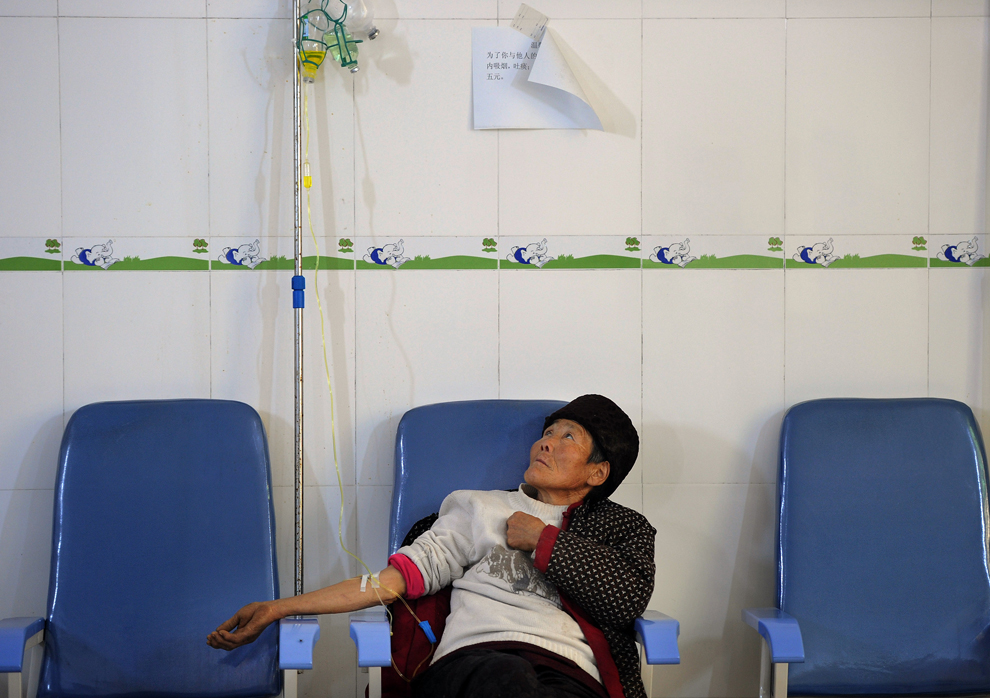 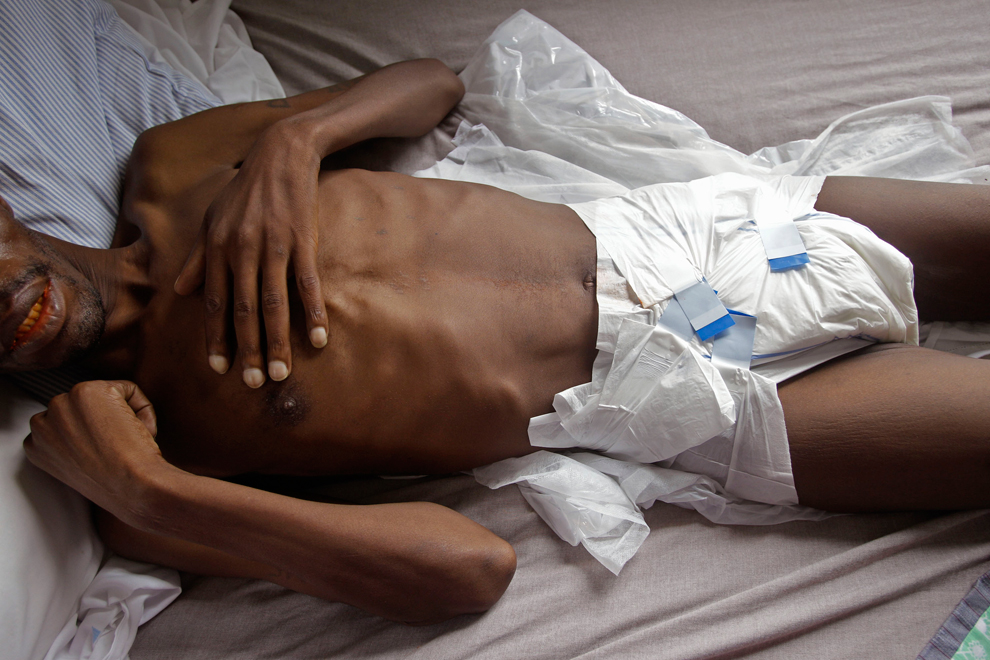 27
A Camboidan HIV positive woman carries her baby during a ceremony to mark World AIDS day in Kandal province, south of Phnom Penh, Dec. 1, 2011. Some 300 HIV sufferers and their relatives were given food parcels by the Cambodian Red Cross. (Tang Chhin Sothy/AFP/Getty Images) # 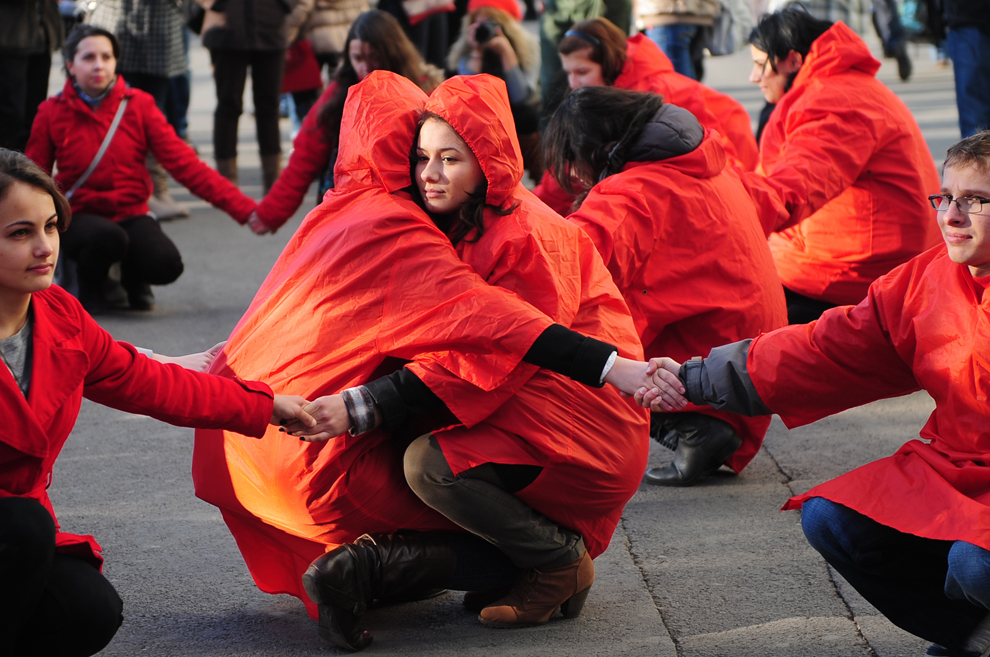 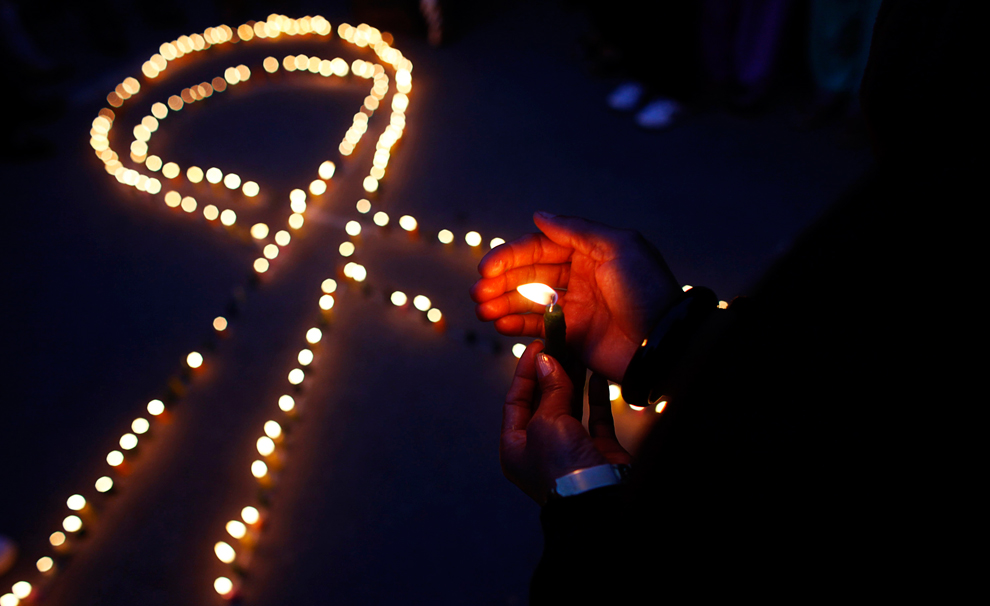 29
Nepalese People light candles in the shape of a red ribbon, the universal symbol of awareness and support for those living with HIV, in Katmandu, Nepal, Nov. 30, 2011. (Niranajan Shrestha/Associated Press) # 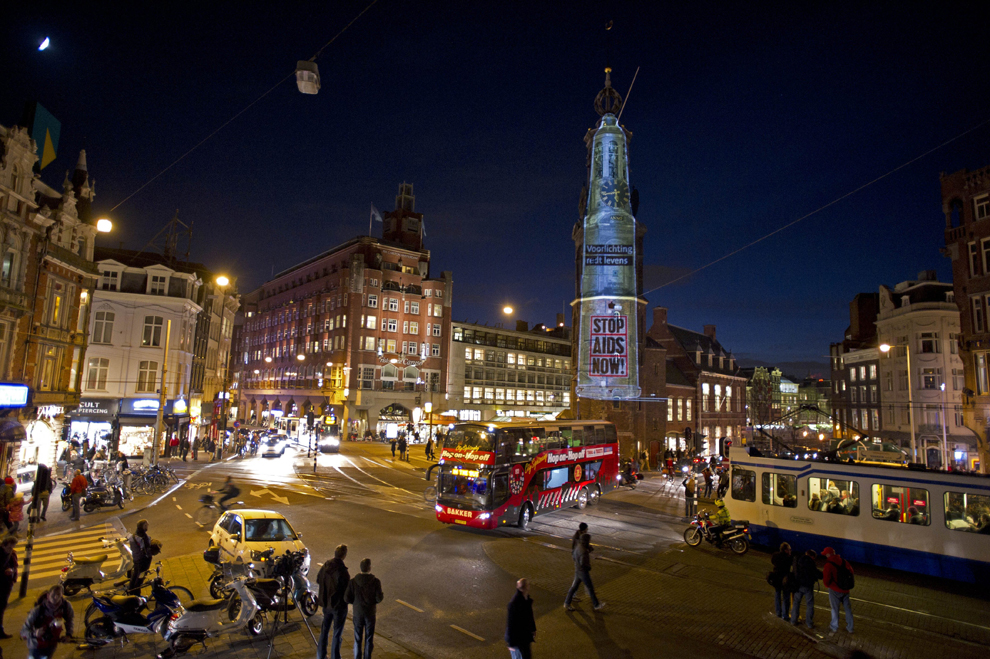 30
The Munttoren (Mint Tower) in Amsterdam, Nov. 30, 2011 displays, by light projection, a giant condom. The campaign of Stop Aids Now! is the kick off for World AIDS Day in the city. (Evert Elzinga/AFP/Getty Images) #