Seven weeks ago, a labor dispute threatened to push the NFL season to the sidelines. Instead, the goliaths of gridiron made a glorious return this past week, from the last-second goalstand by the Super Bowl champs Green Bay Packers to Tom Bradyâs second-to-no-other-Patriotâs 517 yards passing. The games also paused to mark the 10th anniversary of the Sept. 11th attacks. Though the season is just one week old, fans across the globe are hoping their teams will play in the grand finale next Feb. 5, held for the first time in Indianapolis. -- Lloyd Young (34 photos total) 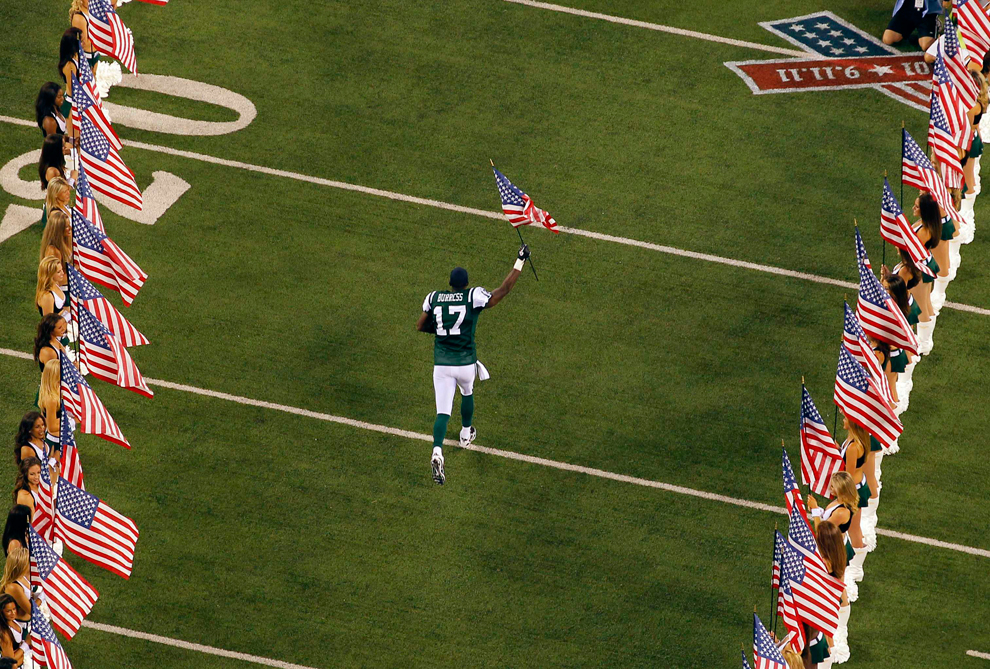 2
New York Jets wide receiver Plaxico Burress carries a U.S. flag as he takes the field during pre-game ceremonies to mark the ten-year anniversary of the Sept. 11th attacks before the NFL football game between the Dallas Cowboys and the Jets Sept. 11. (Brian Snyder/Reuters) #

3
San Francisco 49ers wide receiver Ted Ginn Jr. celebrates after scoring on a 55-yard punt return for a touchdown against the Seattle Seahawks in the fourth quarter of an NFL football game in San Francisco Sept. 1. (Paul Sakuma/Associated Press) # 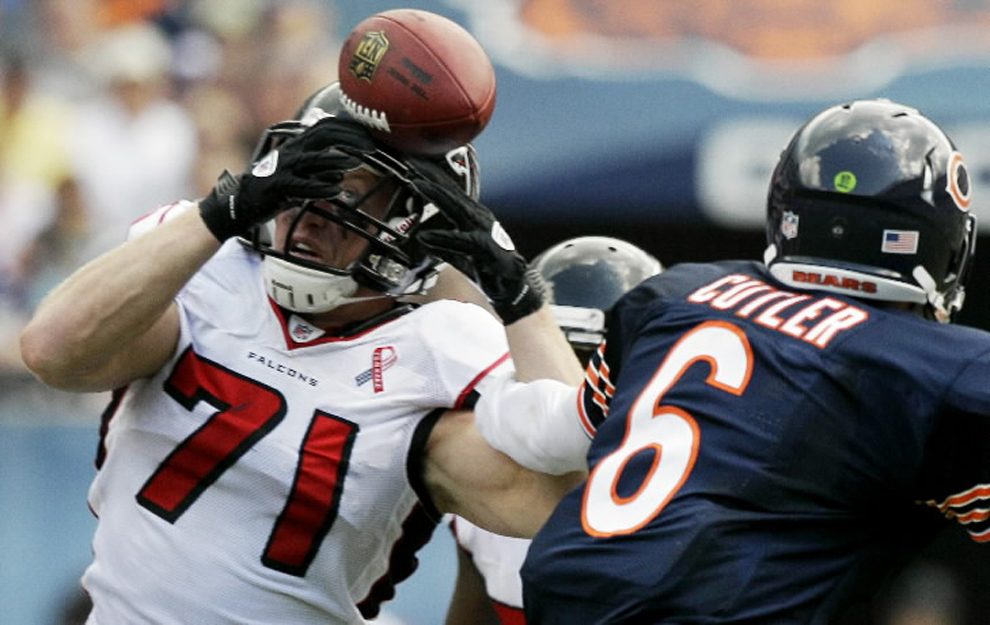 5
Rex Grossman (8) of the Washington Redskins takes a snap against the New York Giants at the FedEx Field season-opening game on Sept. 11. (Scott Cunningham/Getty Images) # 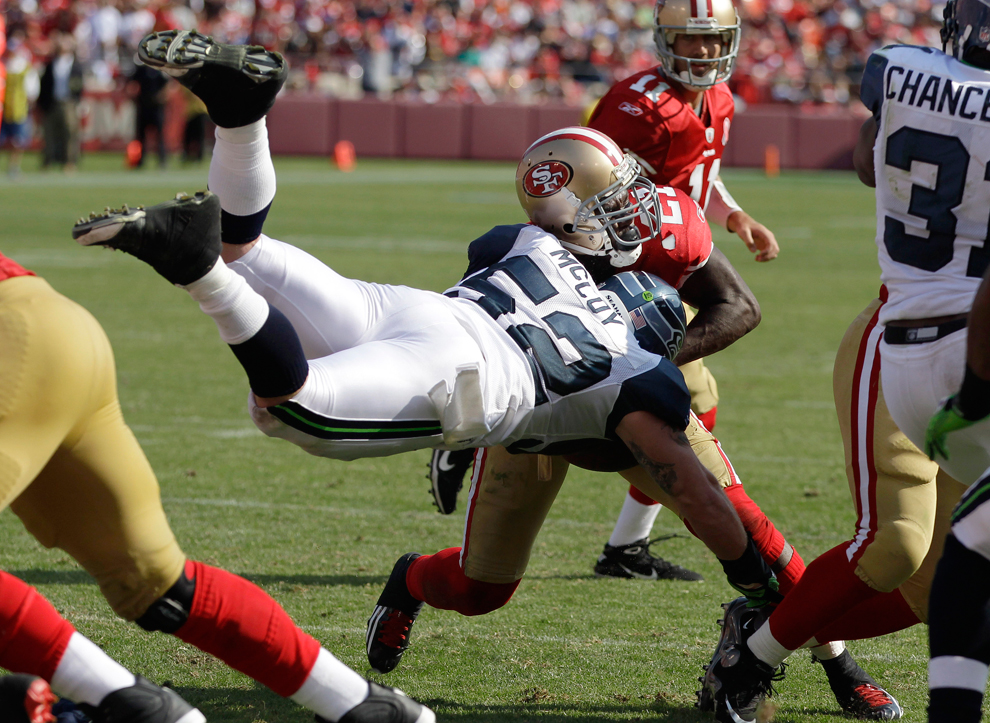 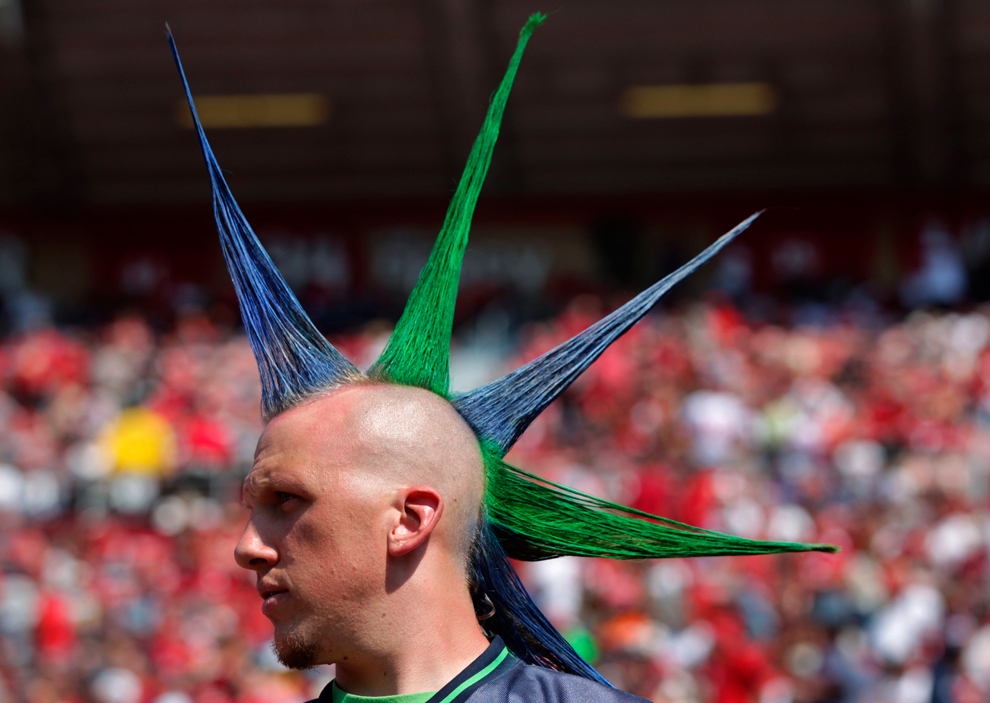 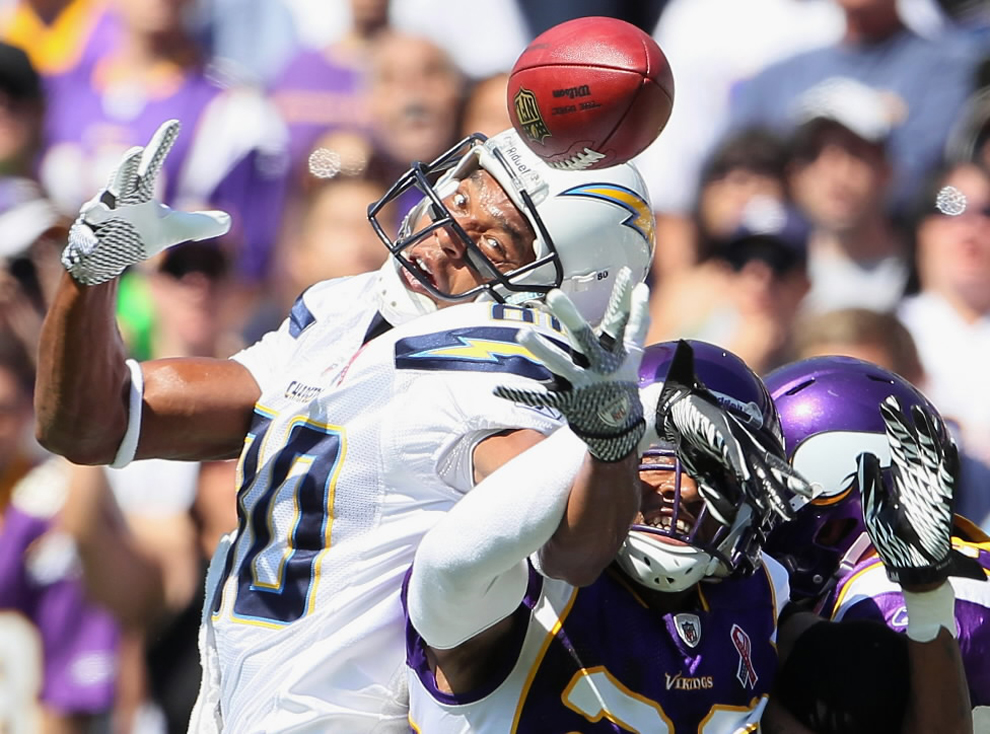 9
Wide receiver Malcolm Floyd (left) of the San Diego Chargers can't hold on to the ball while being defended by Cedric Griffin of the Minnesota Vikings during the first half at Qualcomm Stadium on Sept. 11. The Chargers defeated the Vikings 24-17. (Jeff Gross/Getty Images) #

10
Vontae Davis of the Miami Dolphins runs out to the field during introductions before taking on the New England Patriots at Sun Life Stadium on Sept. 12. (Mike Ehrmann/Getty Images) # 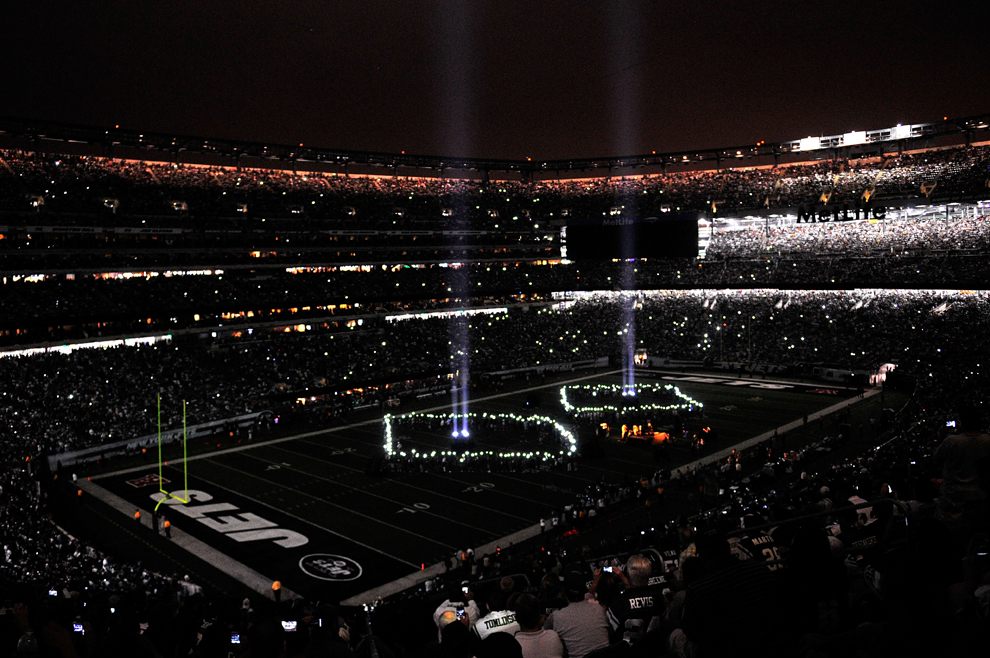 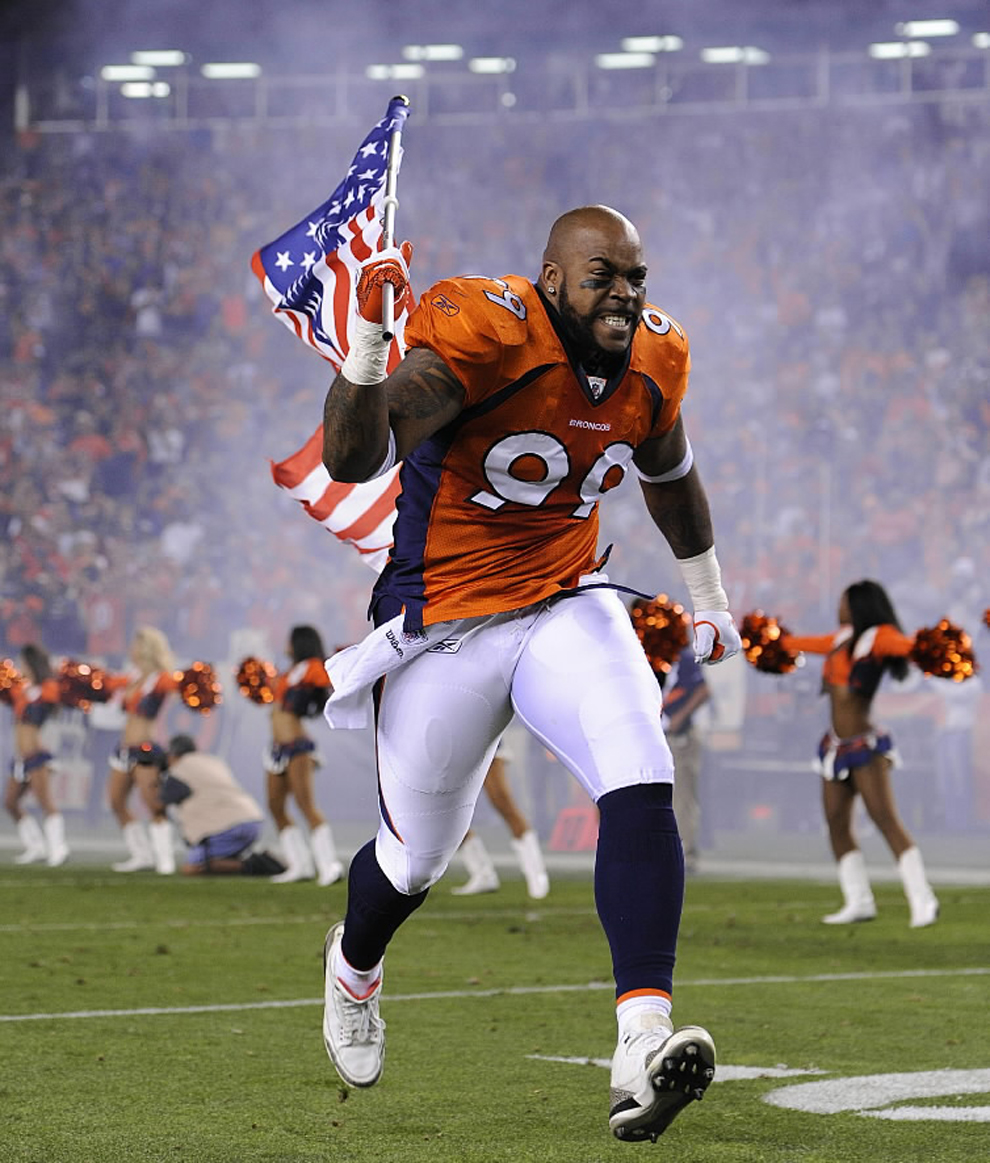 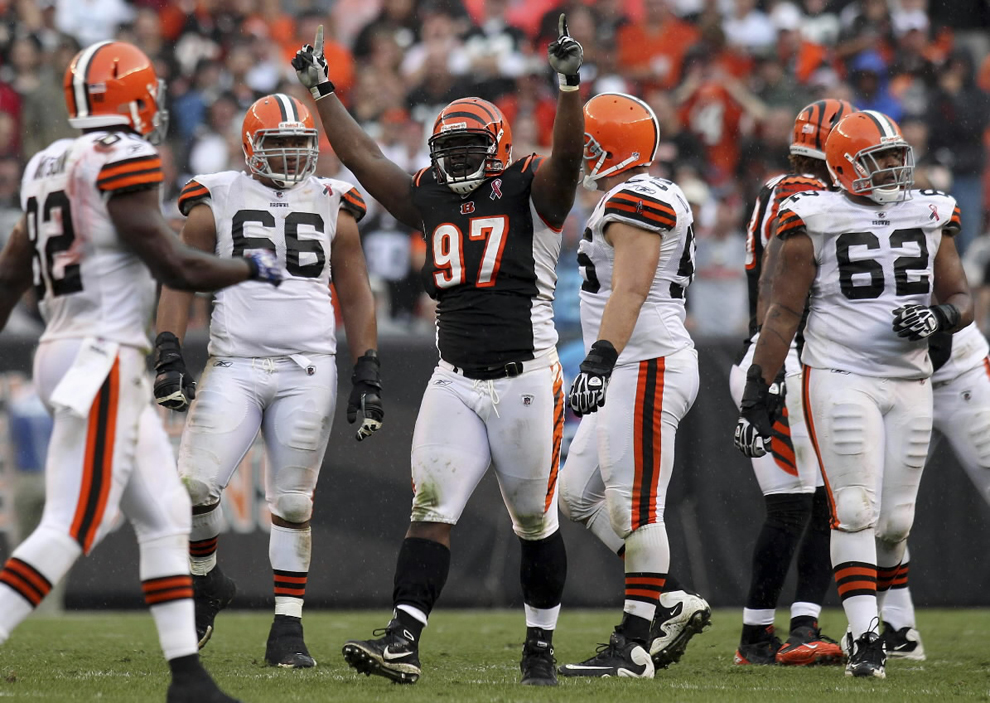 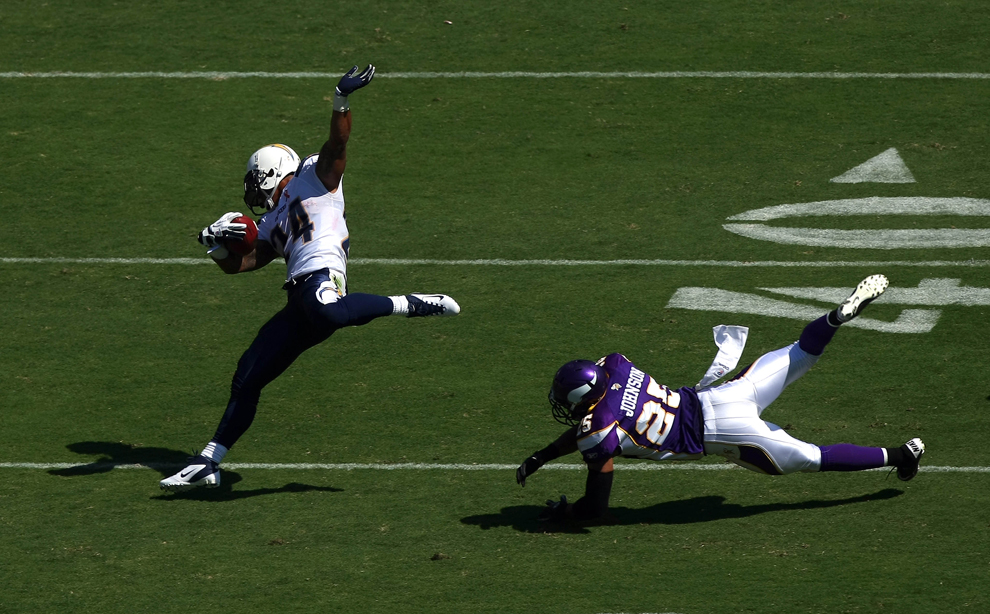 14
Ryan Matthews (left) of the San Diego Chargers runs past the tackle of Safety Tyrell Johnson of the Minnesota Vikings during their NFL Game on Sept. 11 in San Diego. (Donald Miralle/Getty Images) # 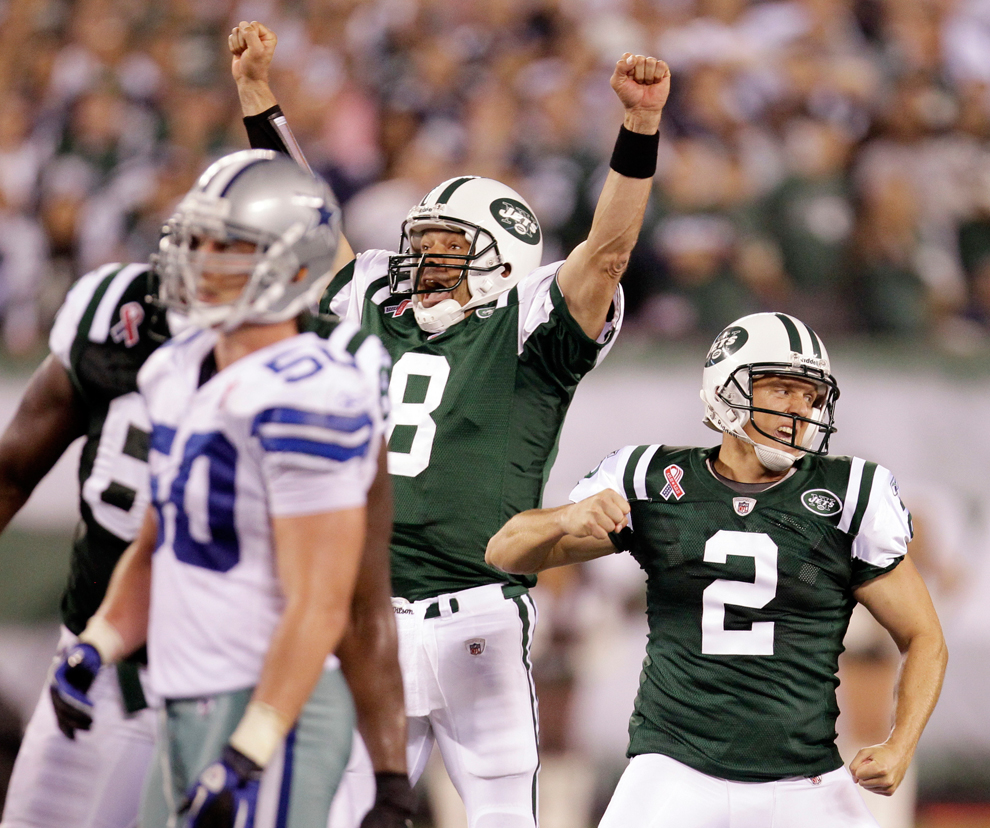 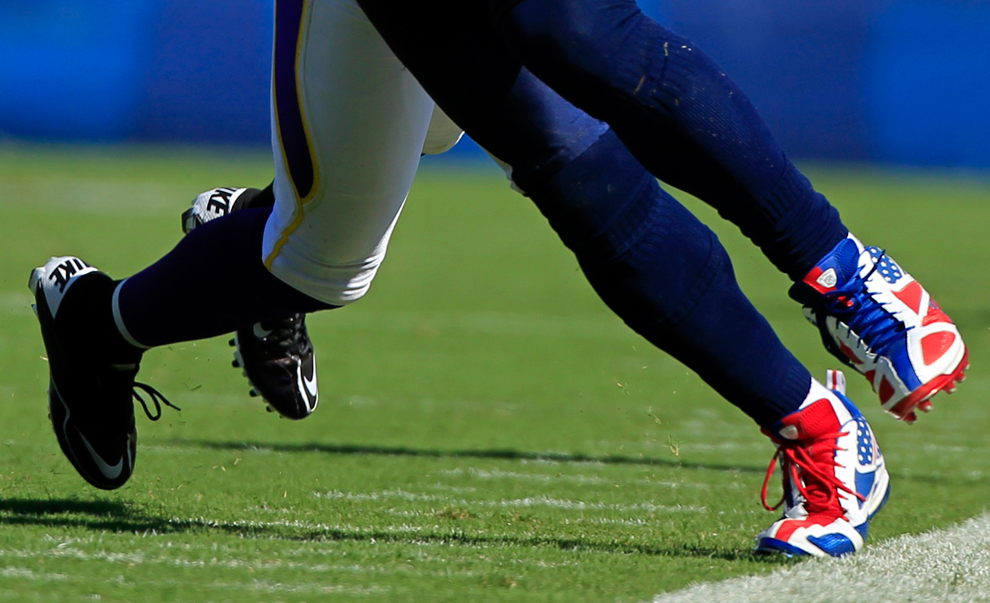 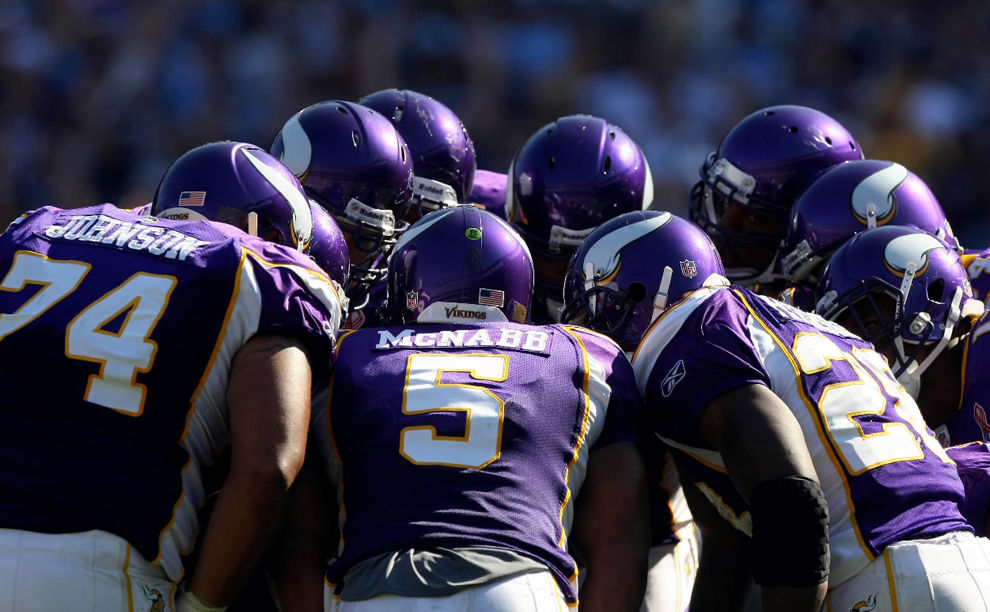 17
Donovan McNabb (5) of the Minnesota Vikings in the huddle with his teammates against the San Diego Chargers during their season-opening game. (Donald Miralle/Getty Images)# 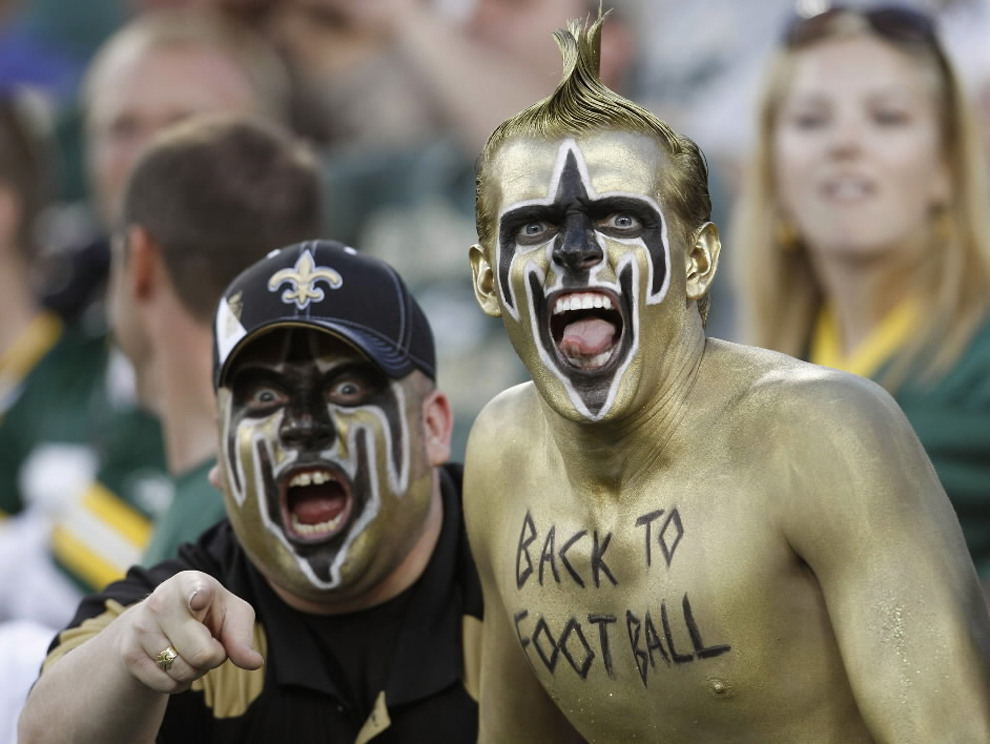 19
Jon Ryan (9) of the Seattle Seahawks punts the ball from the endzone during their season opener against the San Francisco 49ers at Candlestick Park on Sept. 11. (Ezra Shaw/Getty Images) # 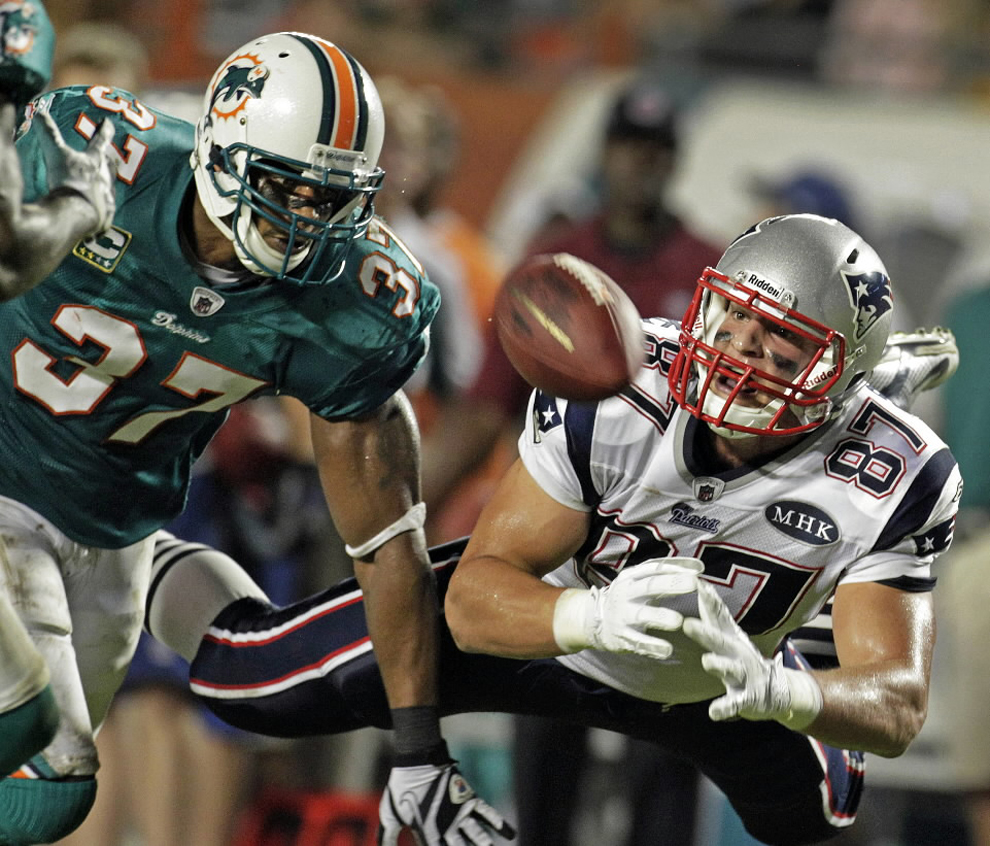 21
Washington Redskins linebacker Ryan Kerrigan is congratulated by the fans as he leaves the field after an NFL football game against the New York Giants in Landover, Md., Sept. 11.(Evan Vucci/Associated Press) # 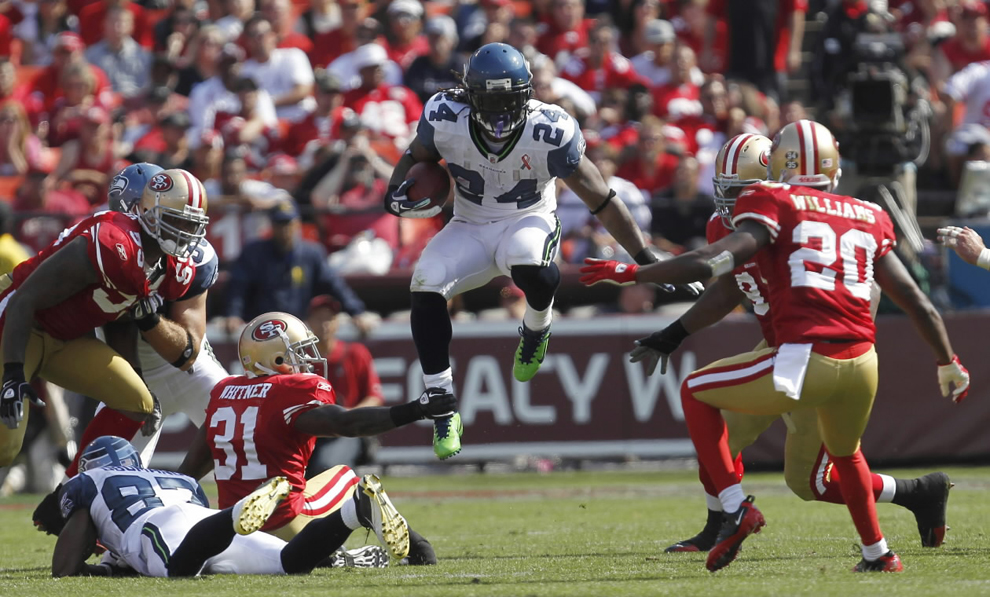 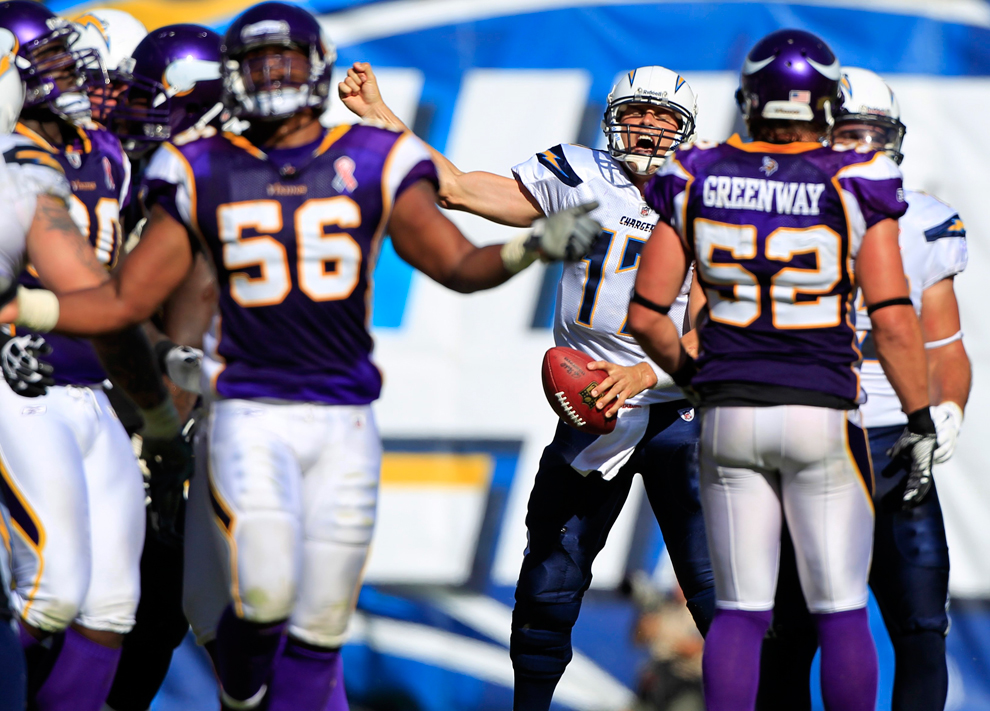 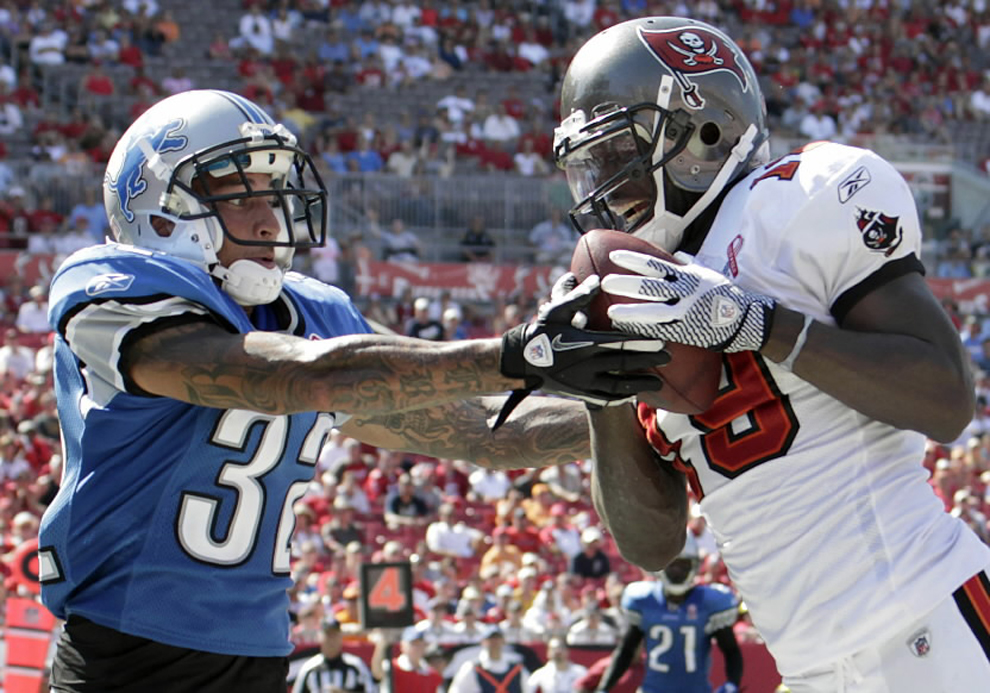 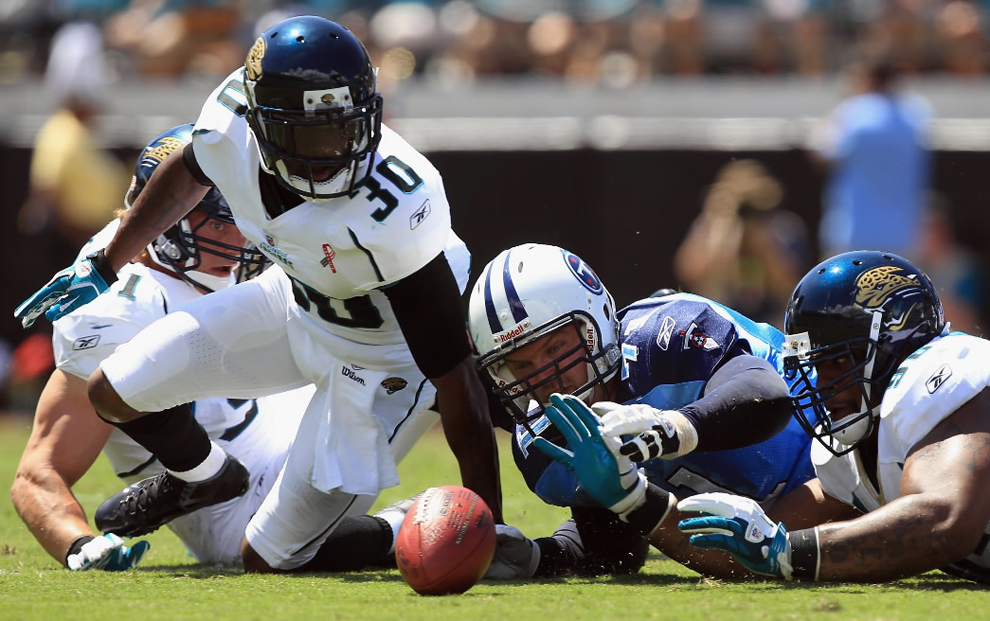 25
Michael Roos (center) of the Tennessee Titans tries to grab a fumble before teammates Drew Coleman (left) and Terrance Knighton of the Jacksonville Jaguars during their season opener at EverBank Field on Sept. 11. (Streeter Lecka/Getty Images) # 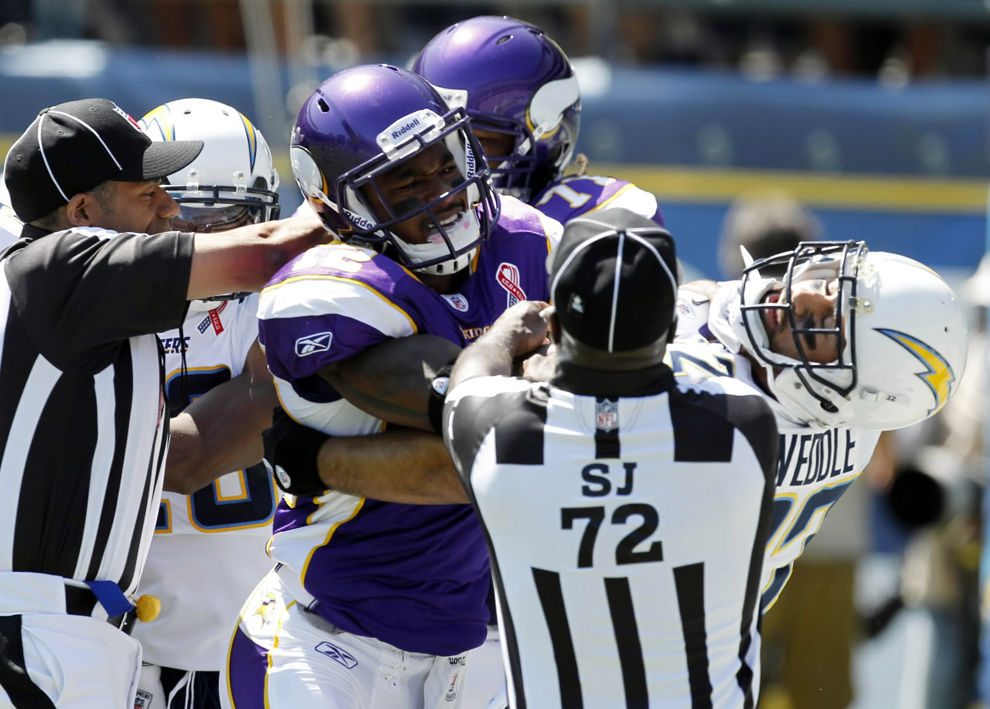 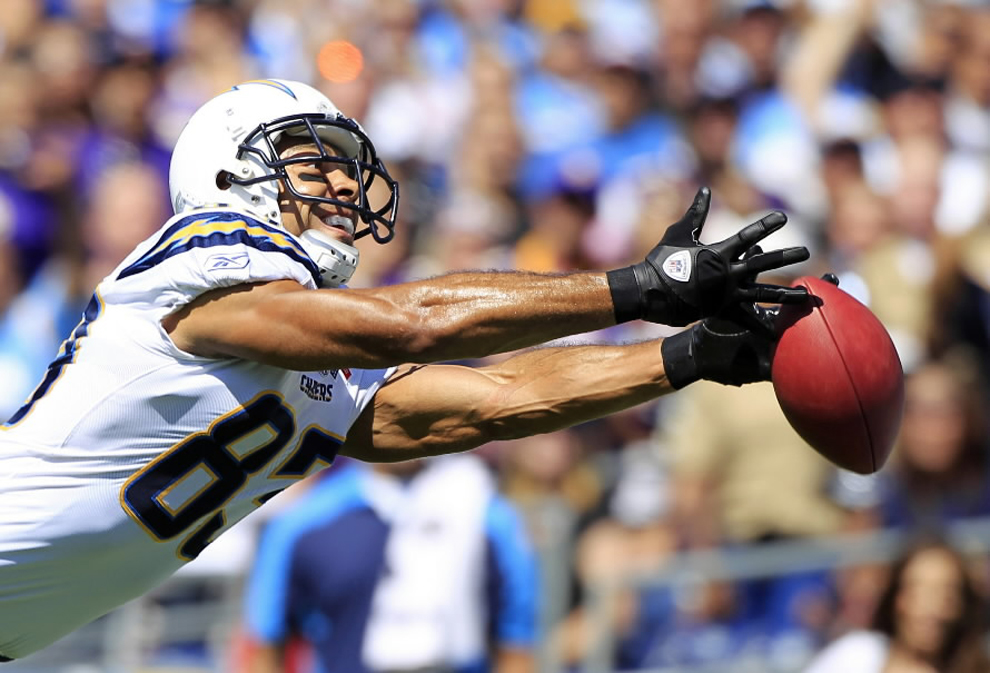 27
San Diego Chargers wide receiver Vincent Jackson fails to get his fingers on a touchdown pass in the first half against the Minnesota Vikings during their season-opening NFL football game. (Mike Blake/Reuters) #

28
Baltimore Ravens wide receiver Anquan Boldin (right) grabs a pass for a touchdown in front of Pittsburgh Steelers defensive back Bryant McFadden in the first half of their NFL football game Sept. 11 in Baltimore. (Patrick Semansky/Associated Press) # 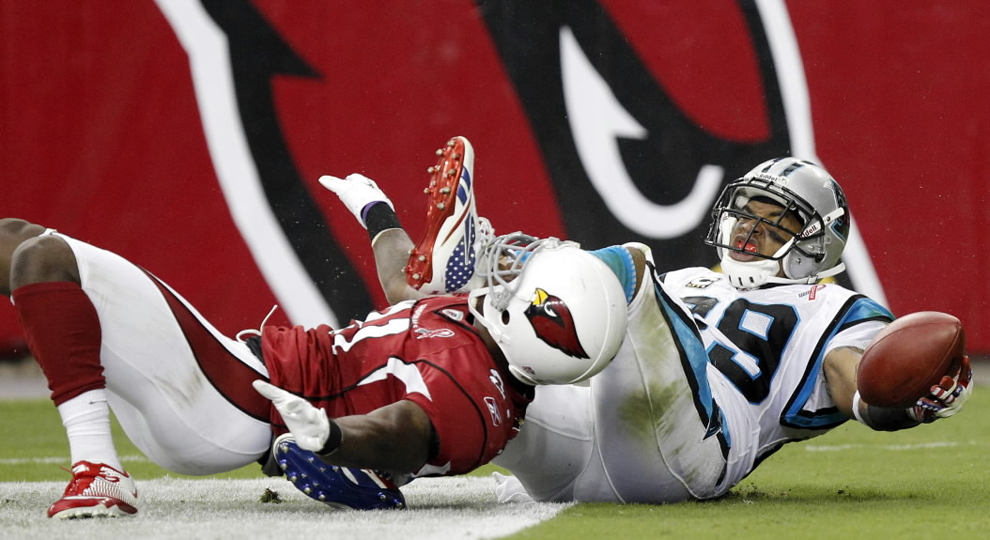 30
Quarterback Tom Brady of the New England Patriots celebrates one of his 4 touchdown passes against the Miami Dolphins at Sun Life Stadium Sept. 1. (Marc Serota/Getty Images) # 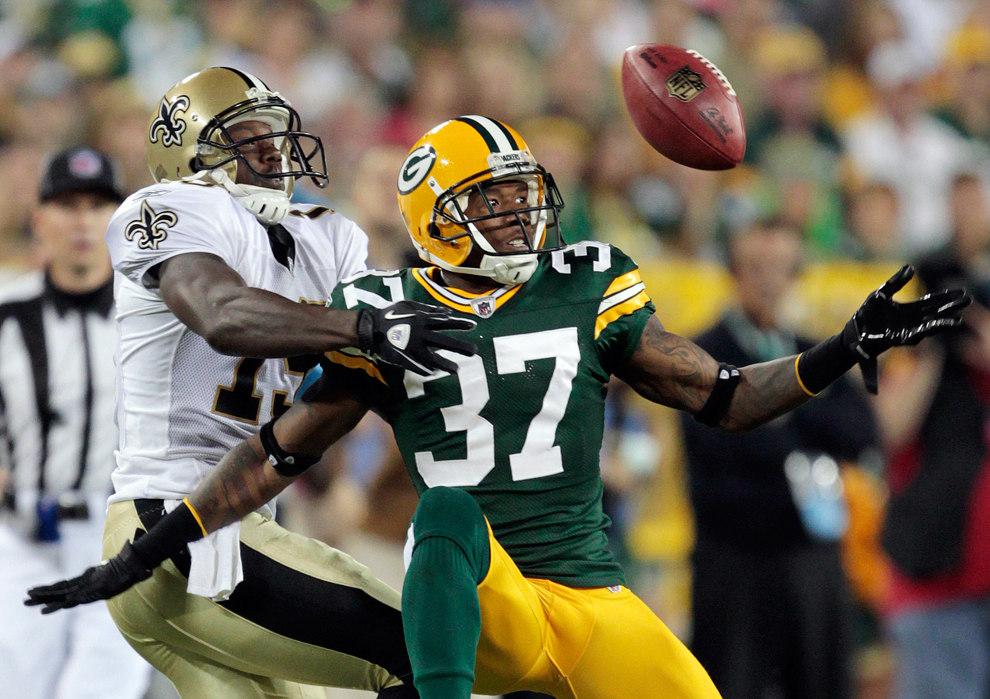 32
Dexter McCluster (22) of the Kansas City Chiefs is brought down by Shawne Merriman of the Buffalo Bills during the game at Arrowhead Stadium in Kansas City on Sept. 11. (Jamie Squire/Getty Images) # 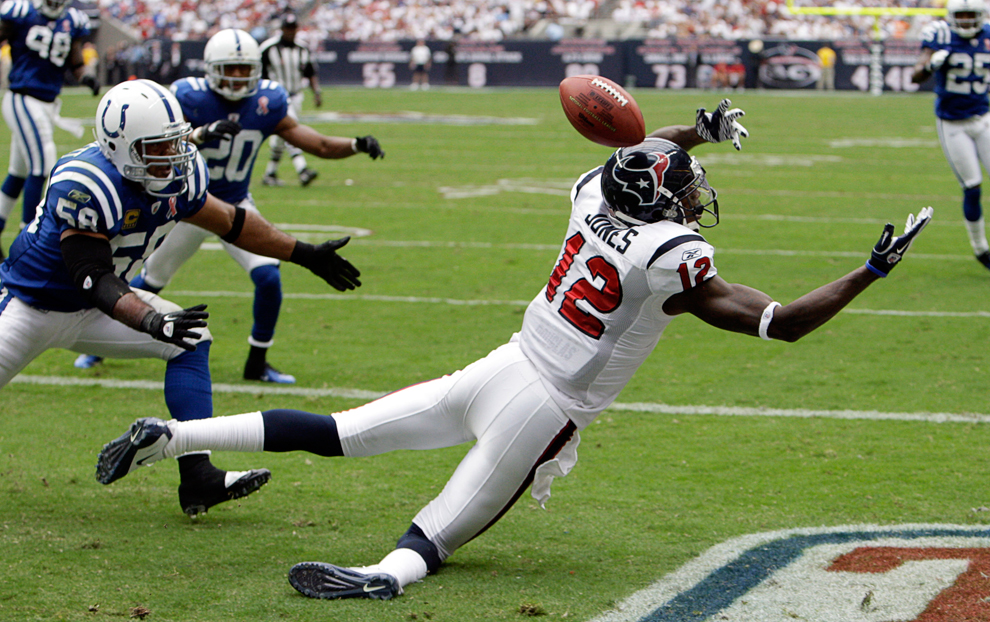 33
Wide receiver Jacoby Jones (12) can't make a catch in the endzone against the Indianapolis Colts at Reliant Stadium during the season opener on Sept. 11. (Bob Levey/Getty Images) # 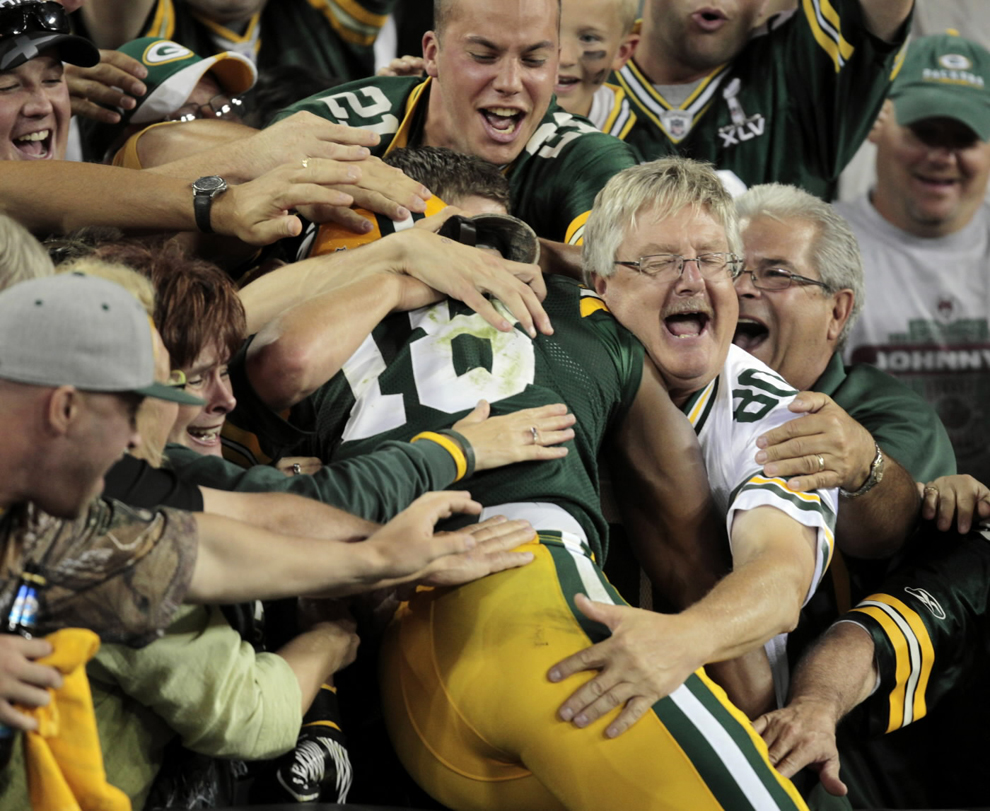 34
Green Bay Packers' Randall Cobb (18) celebrates with fans after a 108-yard touchdown run on a kickoff during the second half of an NFL football game against the New Orleans Saints Sept. 8, in Green Bay, Wis. The Packers won 42-34. (Mike Roemer/Associated Press) #