After a month of heavy rain saturated mountainsides, a fresh deluge sent landslides sweeping into Seoul last week, killing 59 people. Ten were still reported missing. In a strange compounding of the misery, the landslides and flash flooding washed away landmines buried near an air defense unit in Seoul. Soldiers were searching for those landmines as well as North Korean landmines washed away near the border. A total of 76 landslides of different severity struck after the most intense rainstorm in Korea in the last century. Ten university students lost their lives while volunteering at a summer camp for kids when a landslide struck in Chuncheon. "If it keeps raining like this, no country in the world can endure this," South Korean President Lee Myung-bak said. -- Lane Turner (25 photos total) 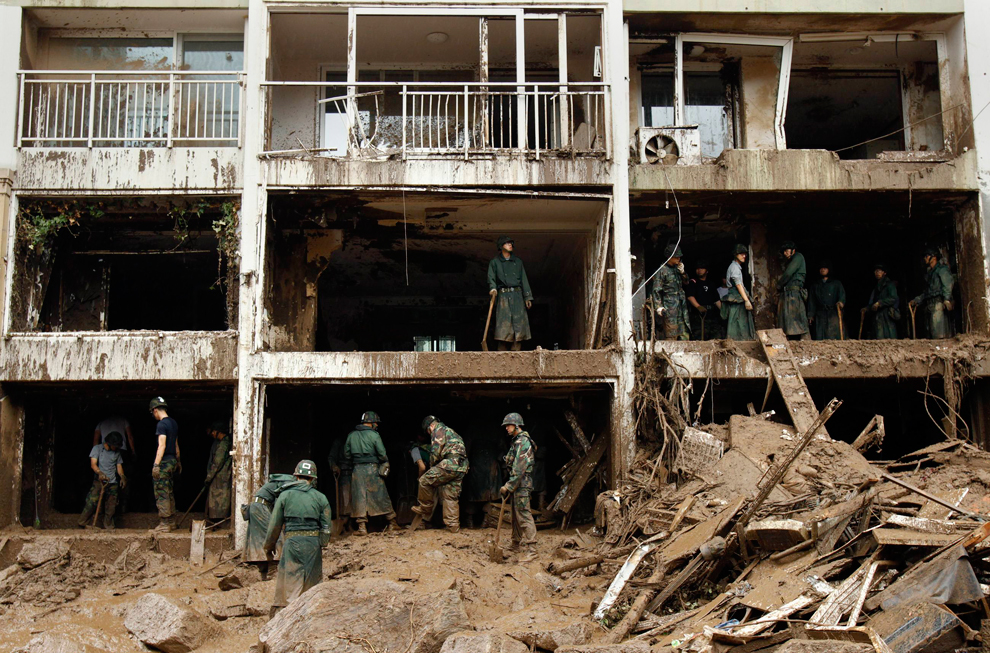 2
A landslide covers the street opposite the damaged apartment building in Seoul on July 27, 2011. (Jang Seung-Yoon/AFP/Getty Images) # 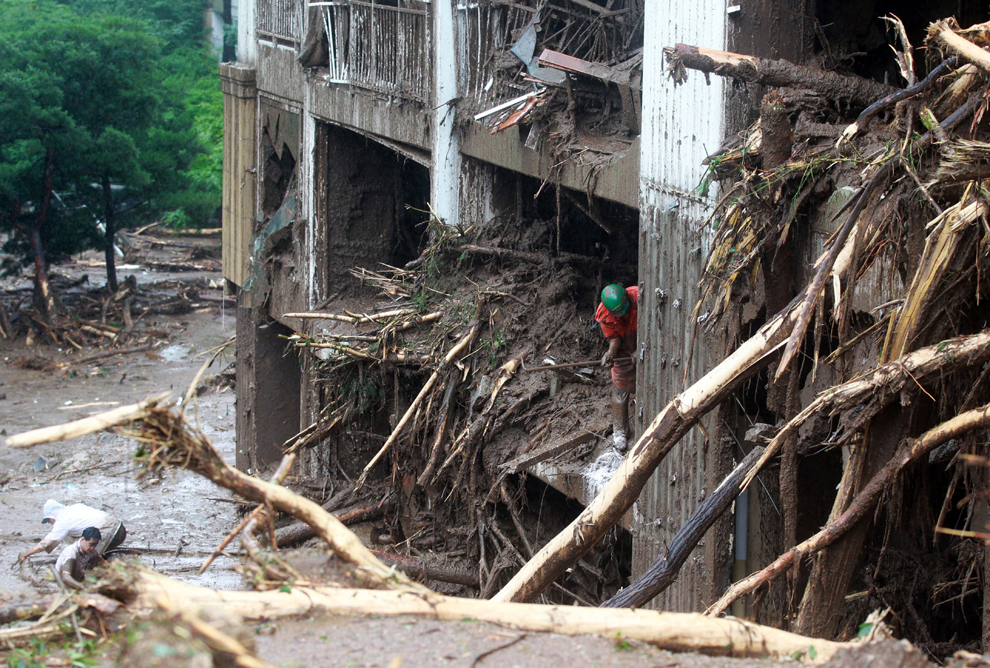 3
A rescue worker checks a block of flats after a landslide hit the apartment building in Seoul on July 27, 2011. (Jang Seung-Yoon/AFP/Getty Images) # 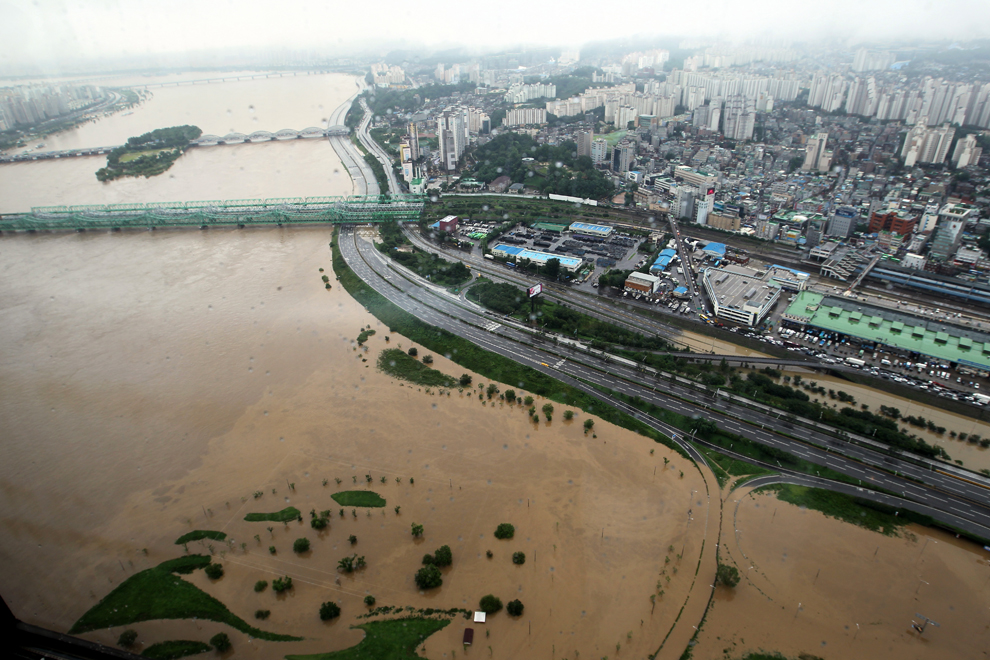 4
An aerial view shows the flooded Olympic Road next to the Han River after heavy rain in Seoul July 27, 2011. (Yohap News via Bloomberg) # 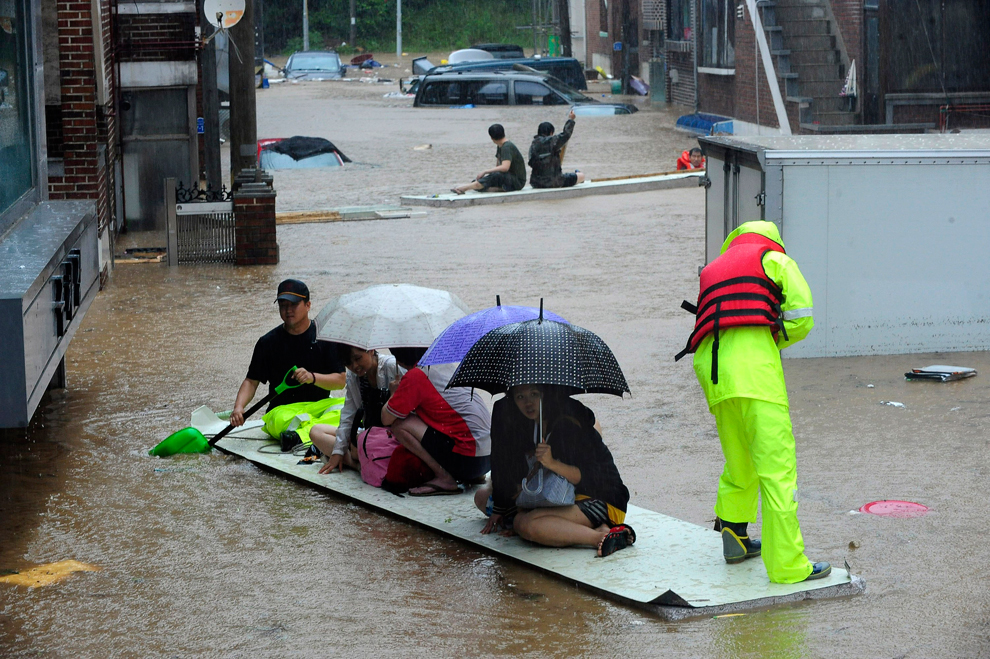 5
Residents on a makeshift raft evacuate from a flooded area in Gwangju, South Korea on July 27, 2011. (Newsis/AP) # 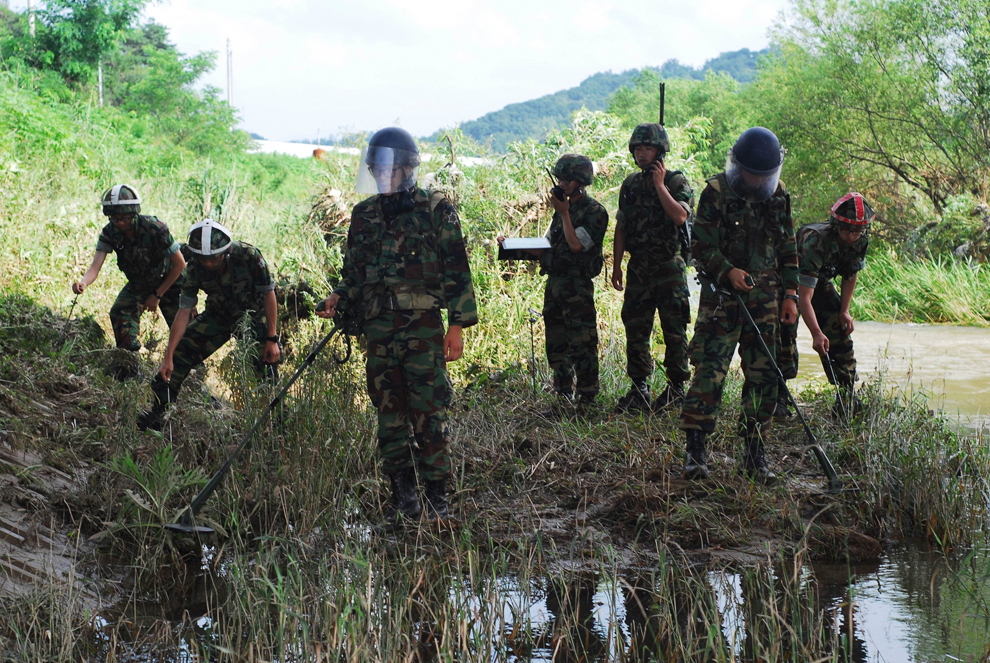 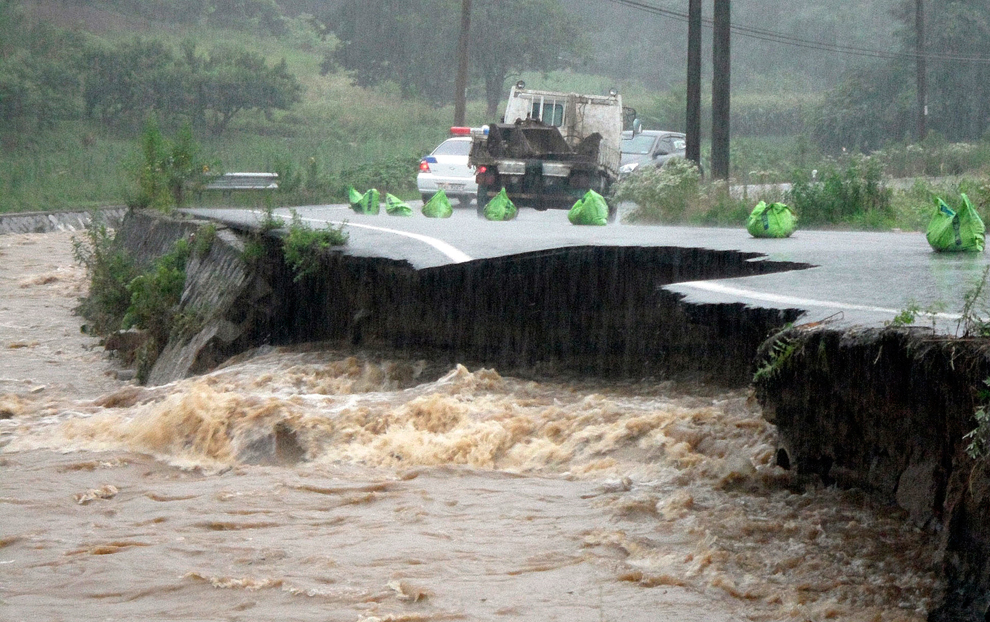 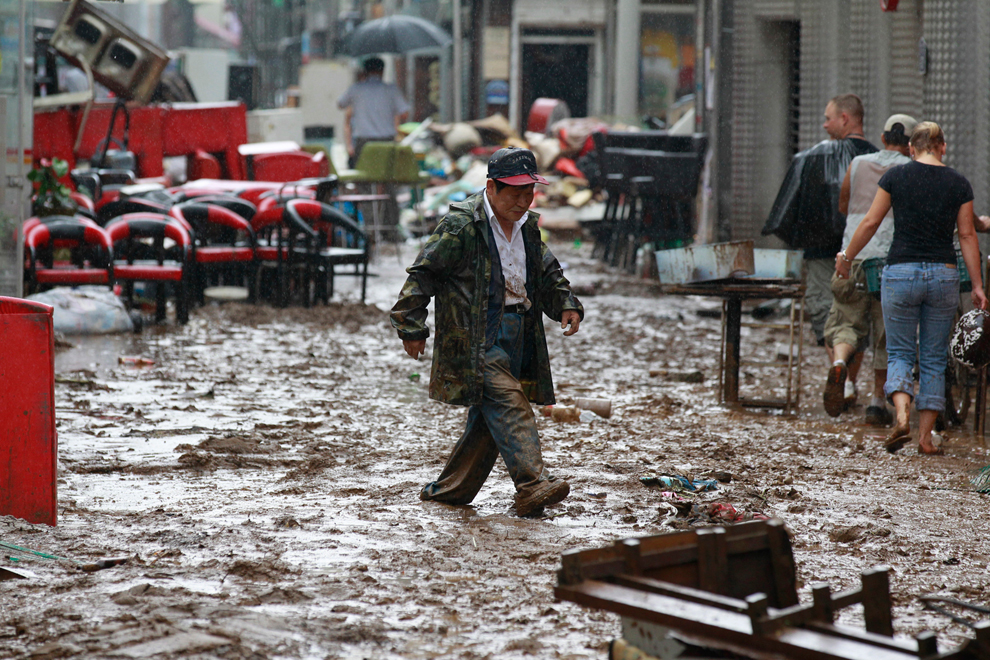 9
A resident walks in a mud-covered street following a heavy rain near the U.S. military base Camp Casey in Dongducheon, South Korea on July 28, 2011. (Lee Jin-man/AP) # 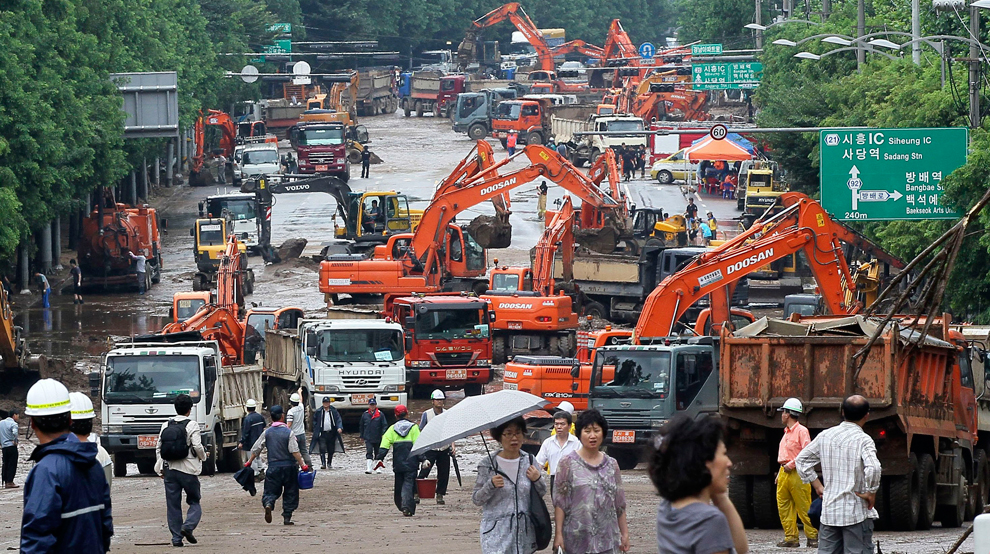 10
Heavy machines are brought in to restore a road damaged by a landslide in Seoul on July 28, 2011. Thousands of rescuers used heavy machinery and shovels to clear mud and search for survivors. (Ahn Young-joon/AP) # 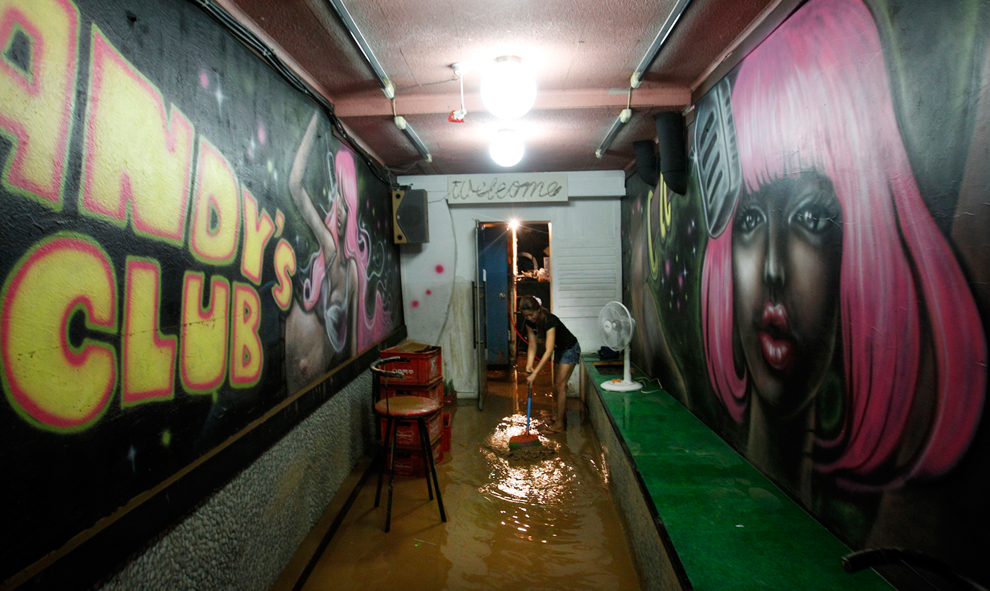 11
A woman sweeps away the muddy water at a bar following heavy rains near the U.S. military base Camp Casey in Dongducheon, South Korea on July 28, 2011. (Lee Jin-man/AP) # 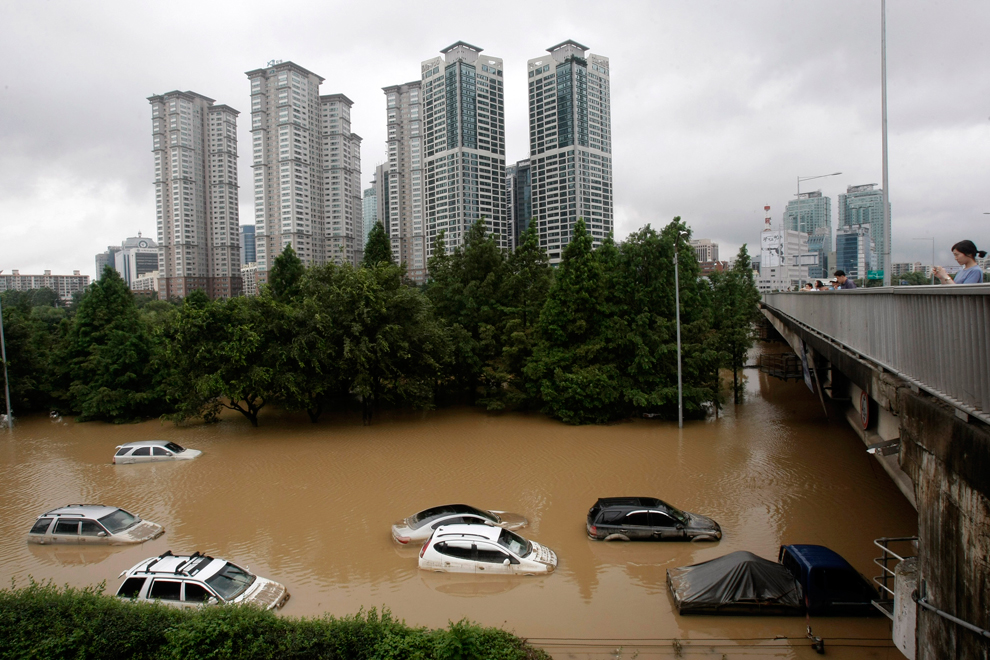 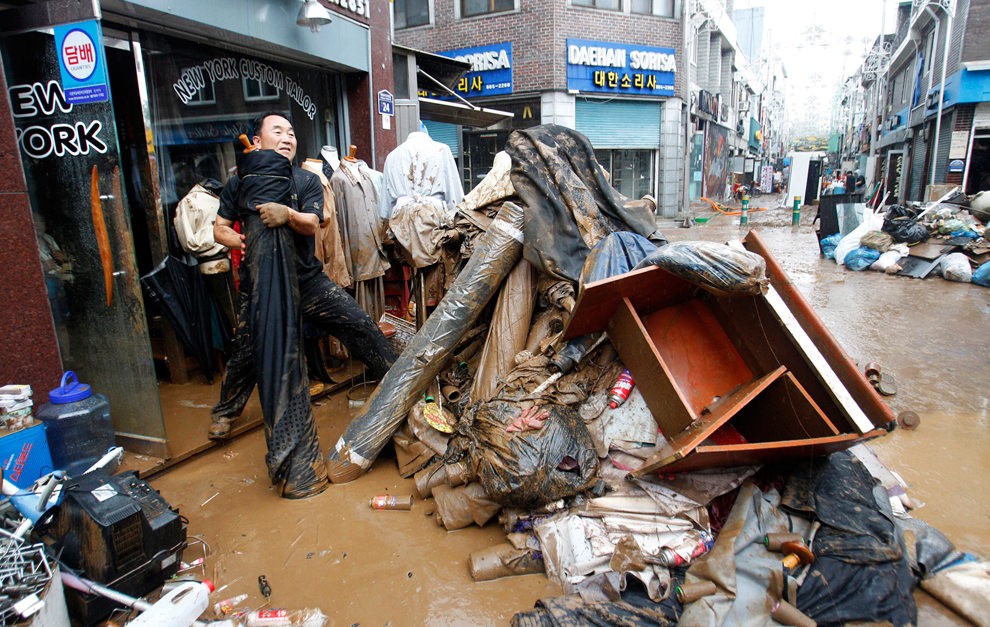 13
An owner cleans his tailoring shop near the U.S. military base Camp Casey in Dongducheon, South Korea on July 28, 2011. (Lee Jin-man/AP) # 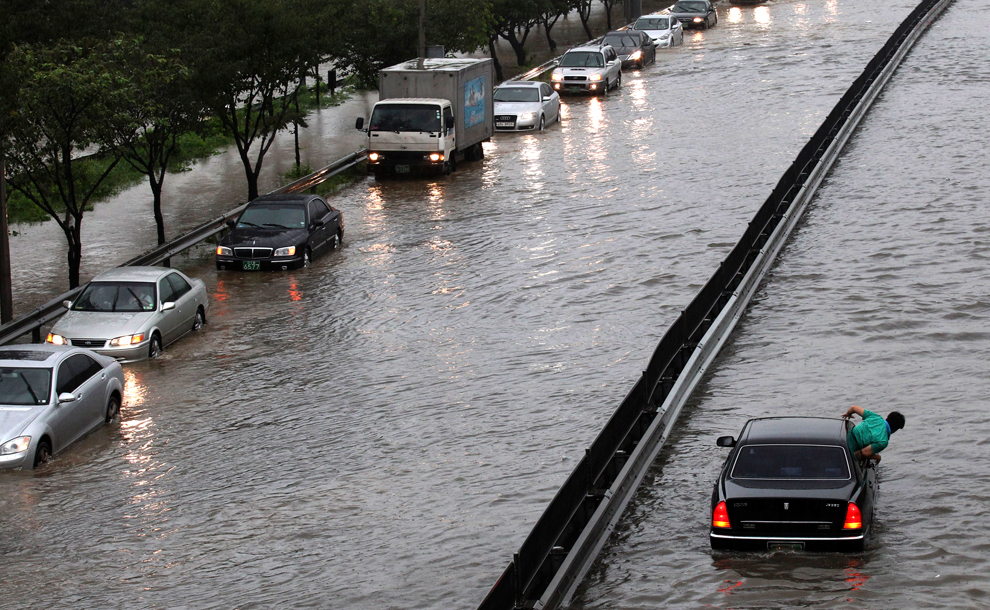 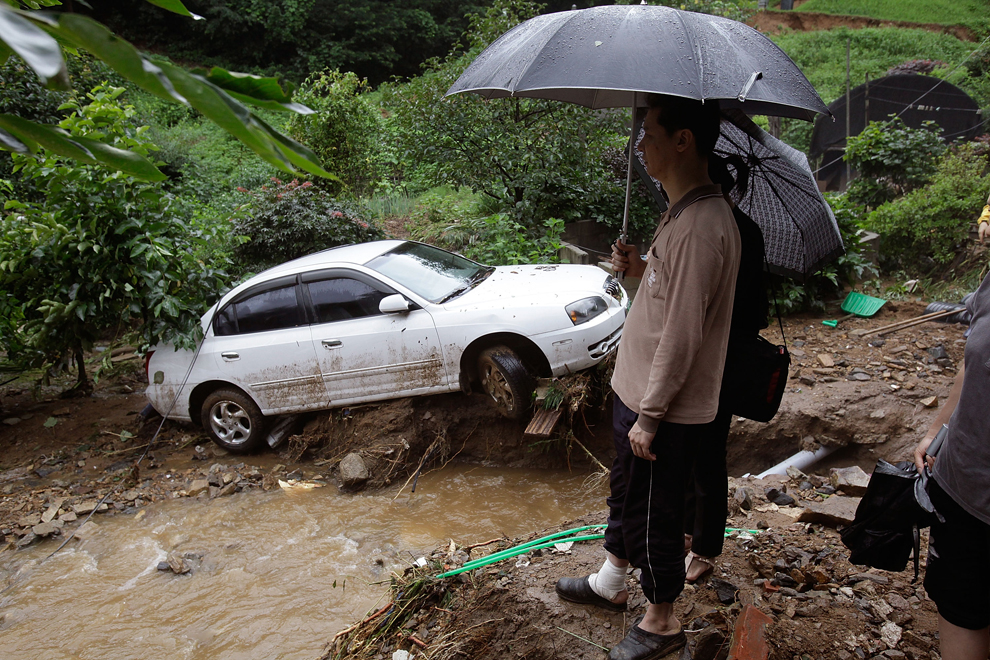 15
Residents look out at the flood water after a torrential rain storm hit the capital city on July 27, 2011 in Seoul. South Korea issued a national crisis warning as torrential rain caused flooding in parts of the country, killing over 35 with at least ten missing. (Chung Sung-Jun/Getty Images) # 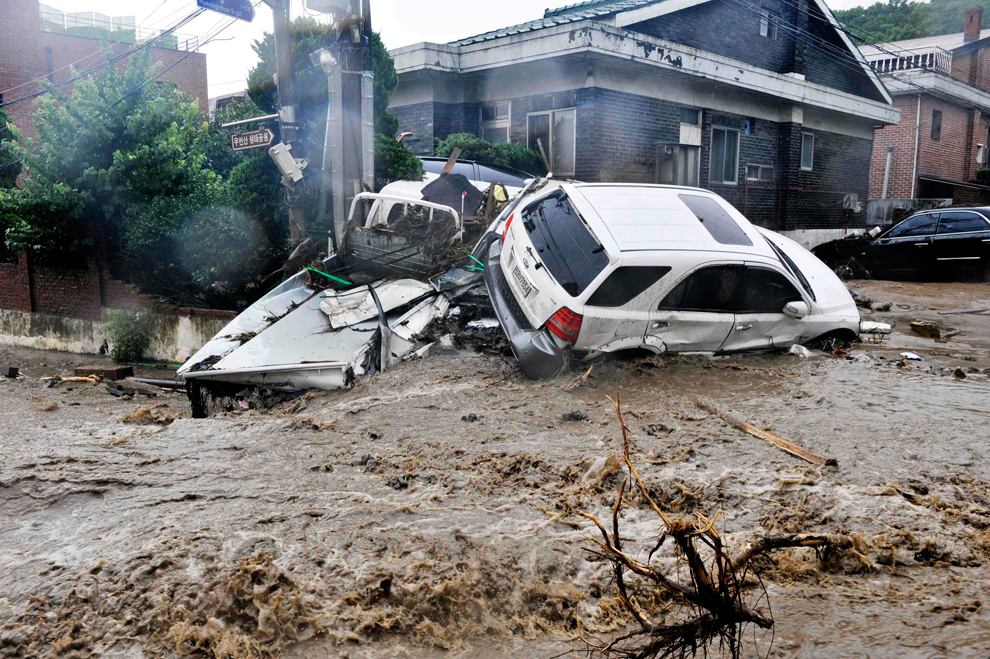 16
Damaged cars pile up after a landslide and heavy rainfall in Seoul July 27, 2011. Wild weather has battered the peninsula, causing widespread flooding and transport delays, while the share price of insurers fell on fears that damage costs would run into millions of dollars. (Park Mun-ho/Newsis/Reuters) # 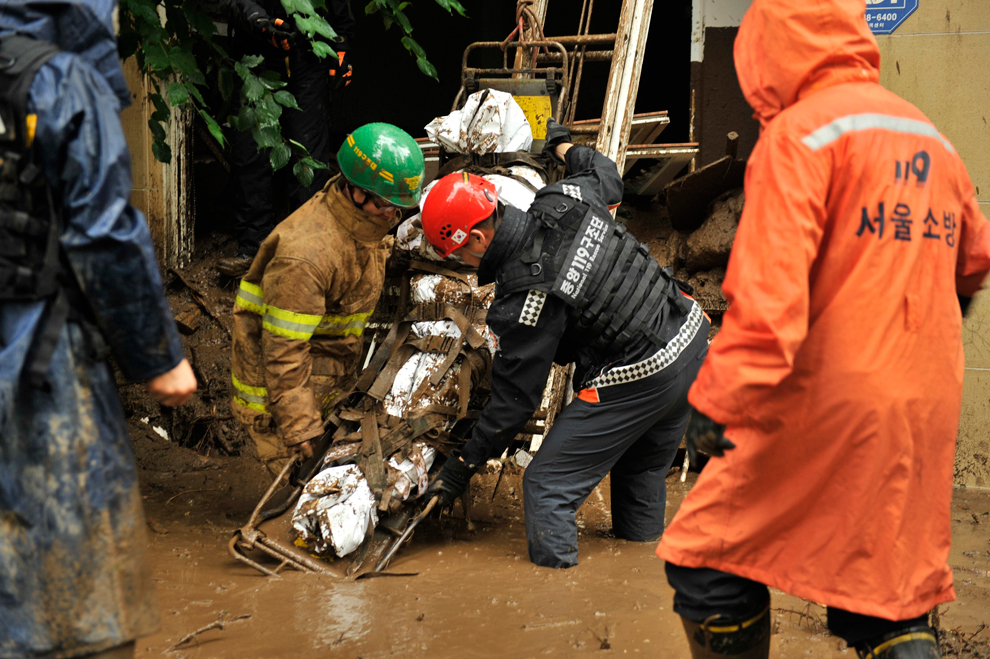 17
Rescue workers evacuate a body after a landslide caused by heavy rains in Seoul July 27, 2011. (Newsis/AP) # 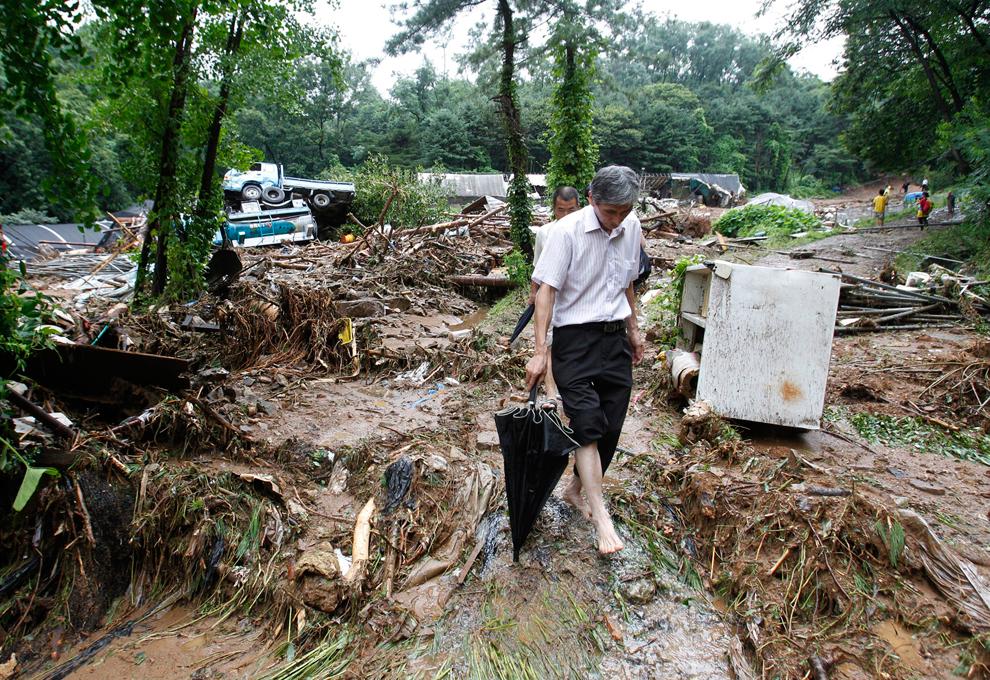 18
Residents walk through the debris after a landslide caused by heavy rains in in Seoul on July 27, 2011. (Lee Jin-man/AP) # 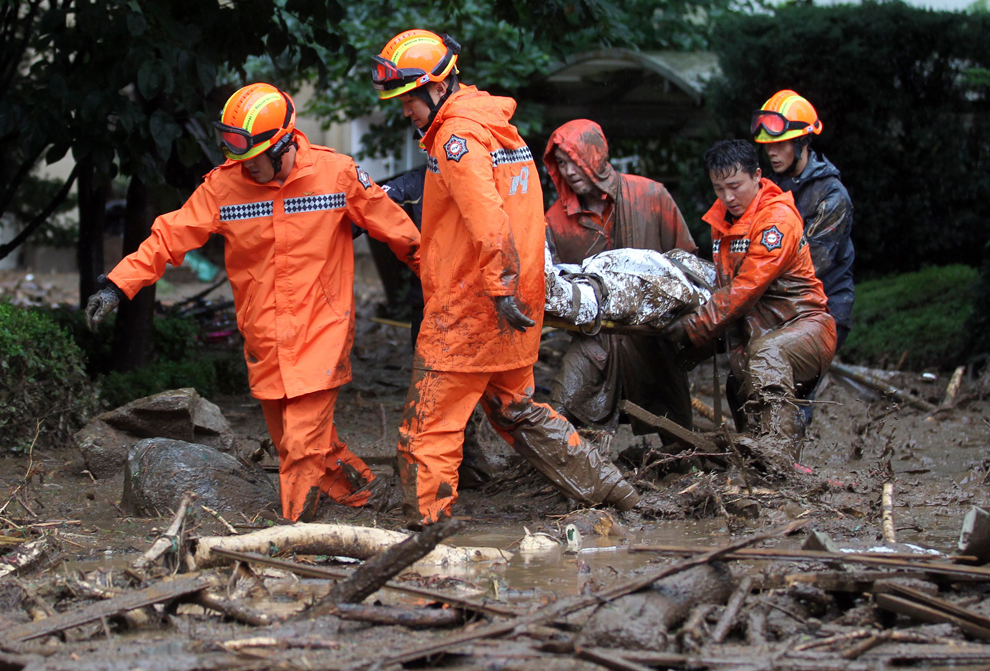 19
Rescue workers remove a body from a collapsed house after a landslide caused by heavy rainfall in Seoul July 27, 2011. (Kim Ju-Seong/Yonhap/Reuters) # 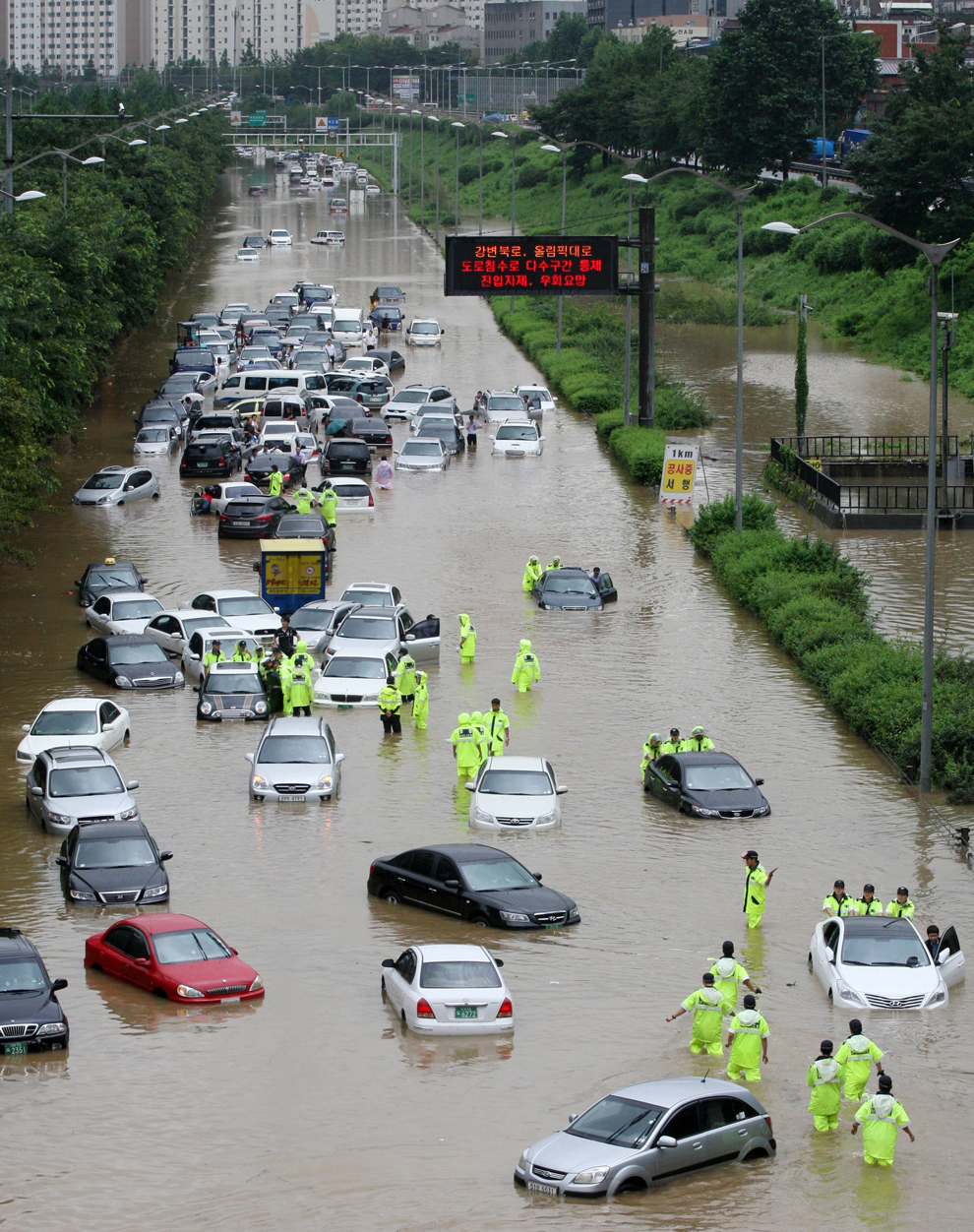 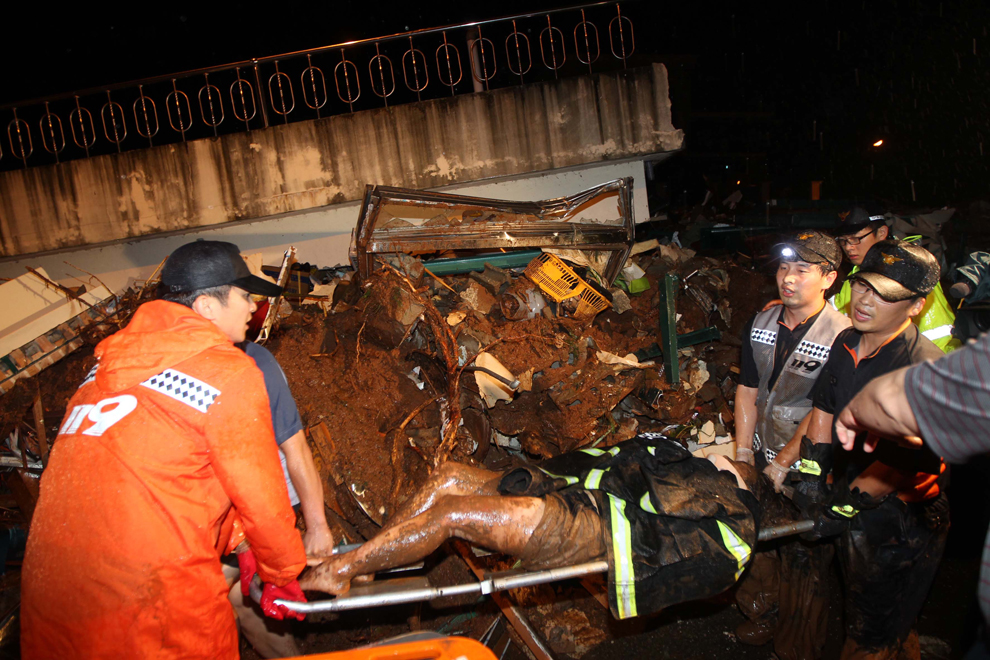 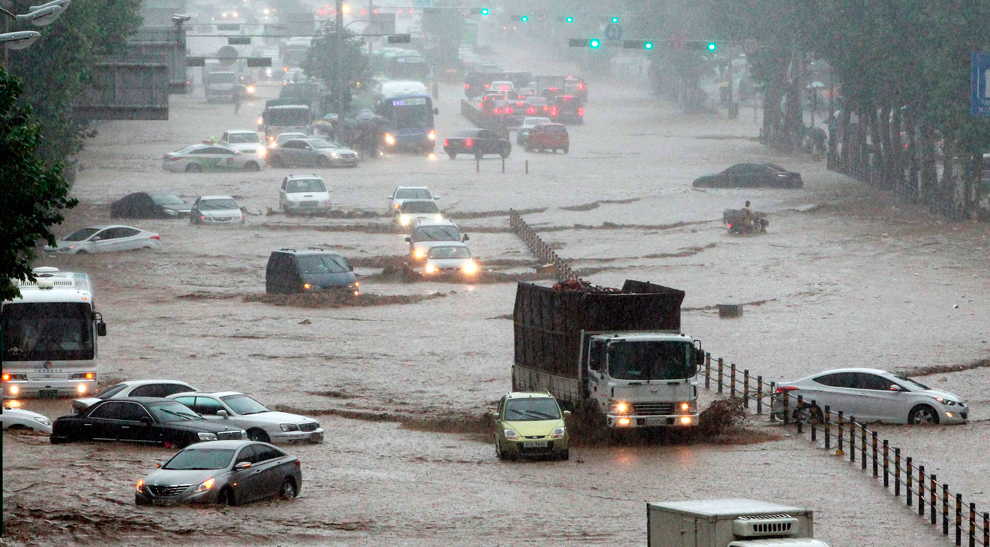 22
Cars are trapped on a flooded road during heavy rainfall in Seoul July 27, 2011. (Lim Hun-jung/Yonhap/Reuters) # 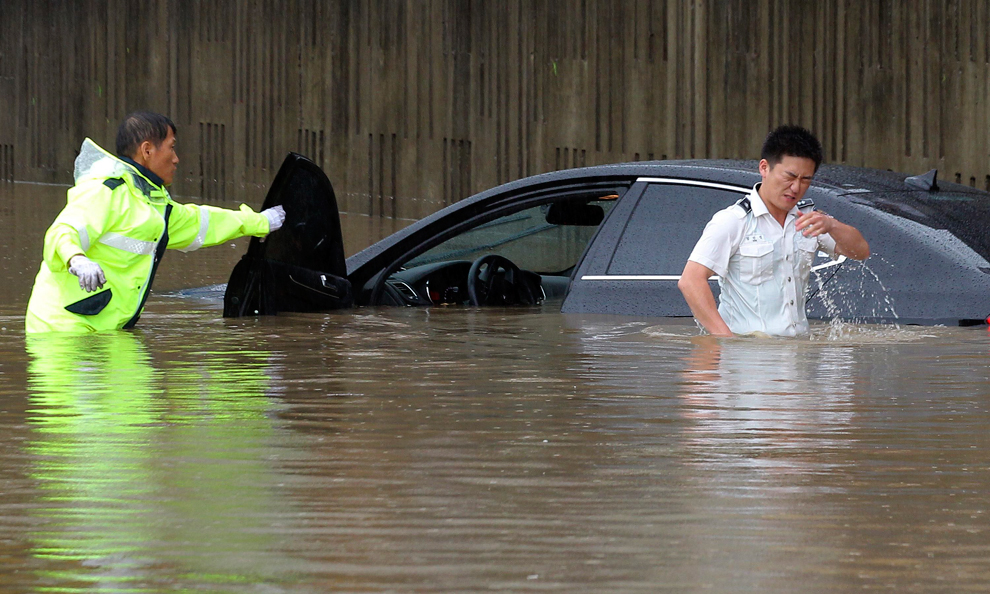 23
Policemen try to move a trapped car on a flooded motorway during heavy rainfall in Seoul July 27, 2011. (Lee Jung-hoon/Yonhap/Reuters) #

24
A bird sits on the top of a flooded bridge at an ecology park in Seoul on July 29, 2011. Torrential downfalls have severely disrupted life in Seoul and its surrounding areas, submerging streets filled with idled cars, flooding subway stations and forcing businesses to shut. (Lee Jin-man/AP) # 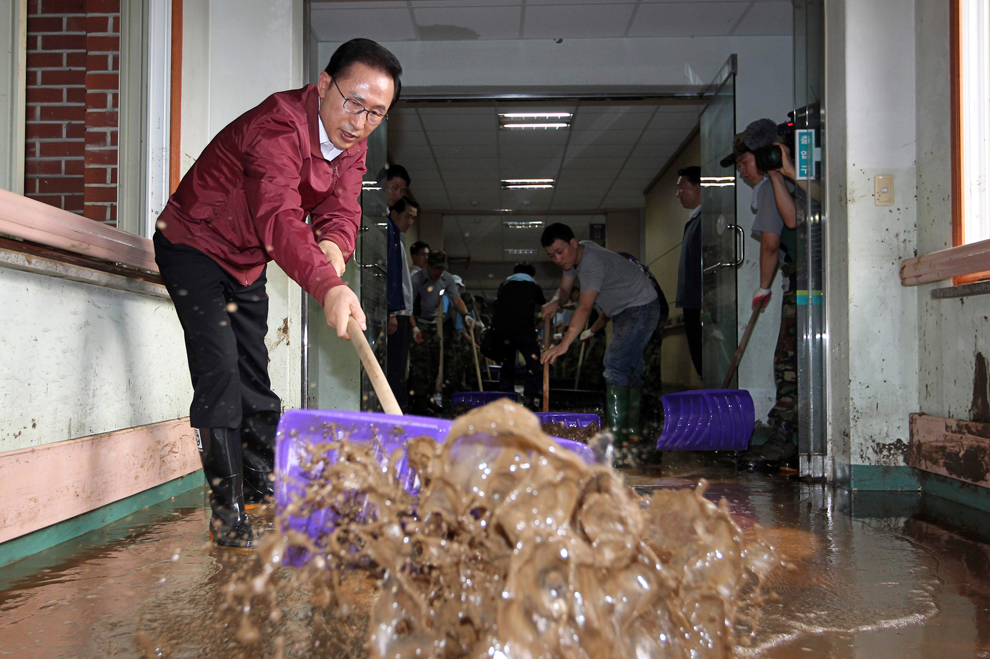