The country continues to mourn and investigate the loss of 68 people killed on the island of Utoya who were attending a youth summer camp of the country's left-wing Labor Party as well as eight killed by a car bomb in Oslo last Friday. Norwegian Anders Behring Breivik is accused of the shootings and attacks. Over the weekend it was reported that more than 100,00 people gathered in Oslo for a flower vigil to remember the victims. -- Lloyd Young 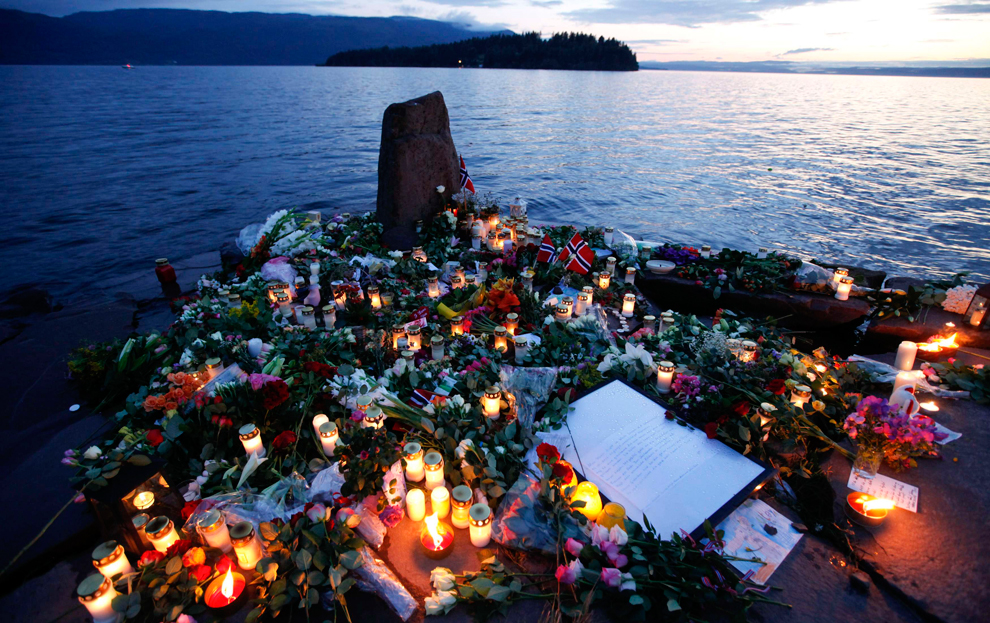 Flowers and candles are seen at a temporary memorial site for the victims of the shooting spree and bomb attack in Norway, on the shore in front of Utoeya island, northwest of Oslo, July 26. Norwegian Anders Behring Breivik is in all likelyhood "insane", his lawyer said after the anti-Islam radical admitted to bomb and shooting spree in Norway on Friday that killed 76 people. (Fabrizio Bensch/Reuters) 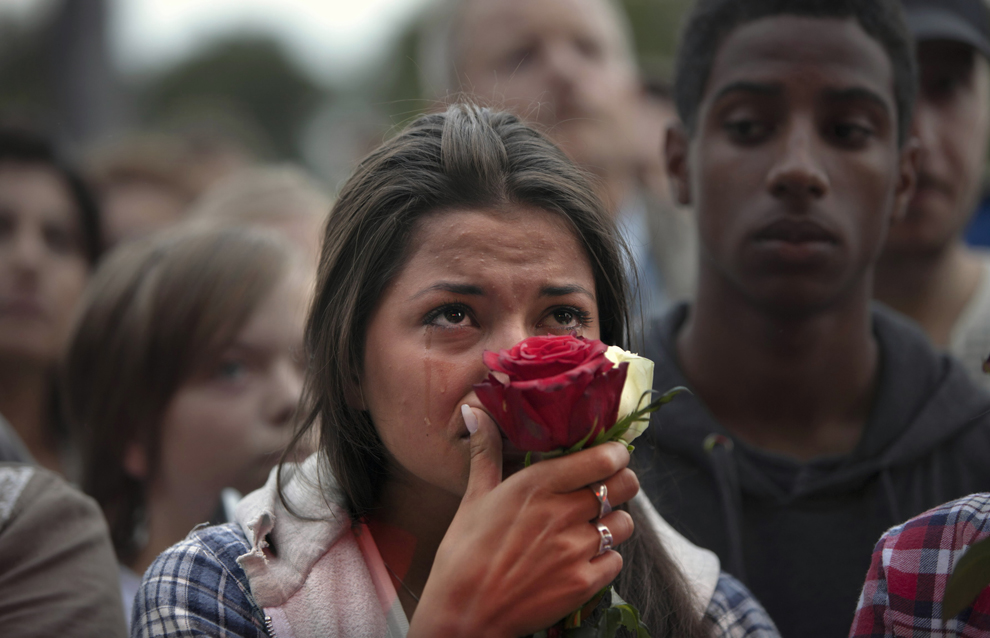 2
Elizabeth Amundsen,16, cries as hundreds of thousands of people gather at a memorial vigil following Friday's twin extremist attacks, July 25 in Oslo. Anders Behring Breivik, 32, claimed that he has "two more cells" working with him as he appeared in court following a bomb blast at a government building in Oslo and a shooting massacre on nearby Utoya Island that killed at least 76 people in all. The death toll was originally reported as 93. (Paula Bronstein/Getty Images) # 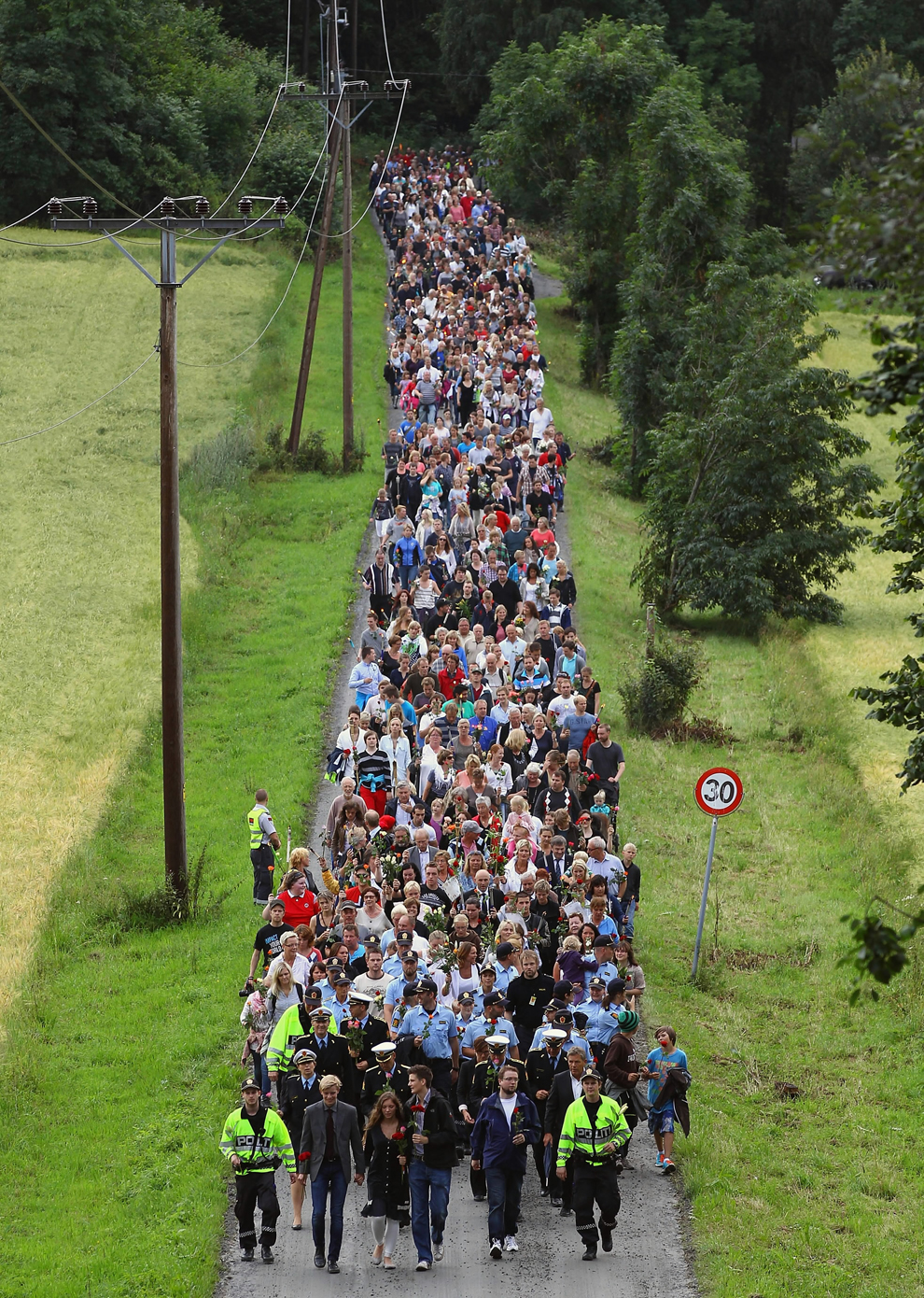 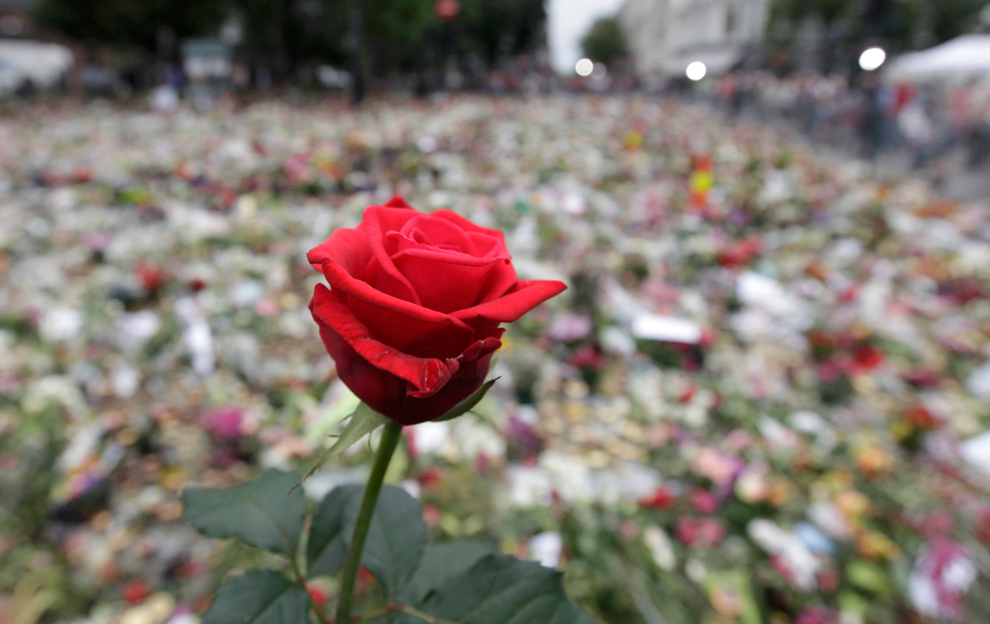 4
A rose is seen above a sea of flowers and lit candles at a temporary memorial site for the victims of the shooting spree and bomb attack in Oslo July 27. (Cathal McNaughton/Reuters) # 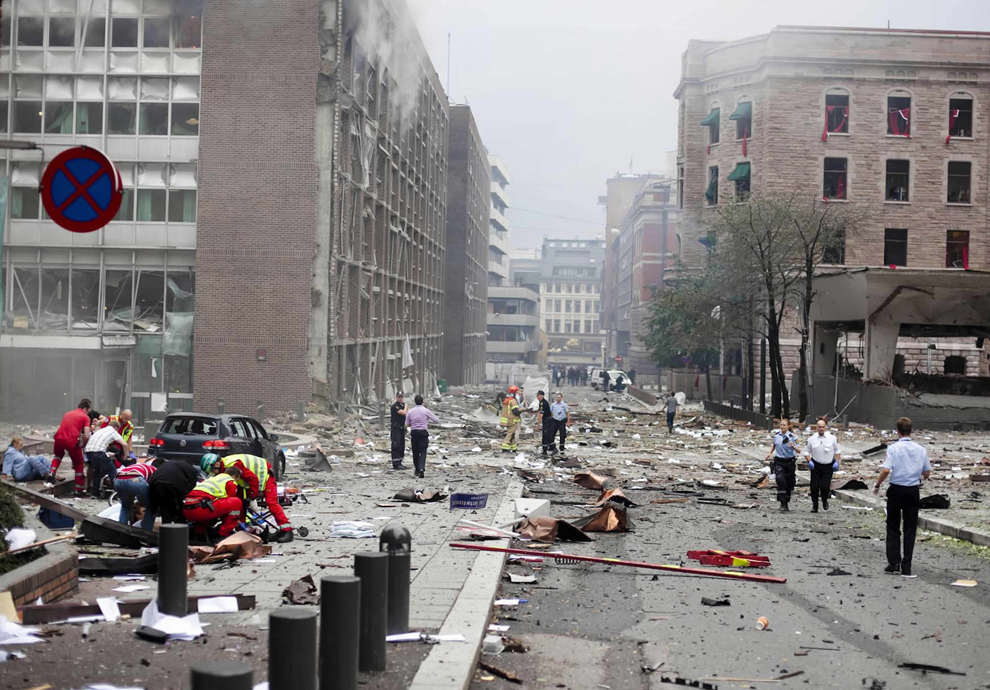 5
Victims received treatment outside government buildings in the center of Oslo, July 22 following an explosion that tore open several buildings including the prime minister's office, shattering windows and covering the street with documents. (Fartein Rudjord/Associated Press) # 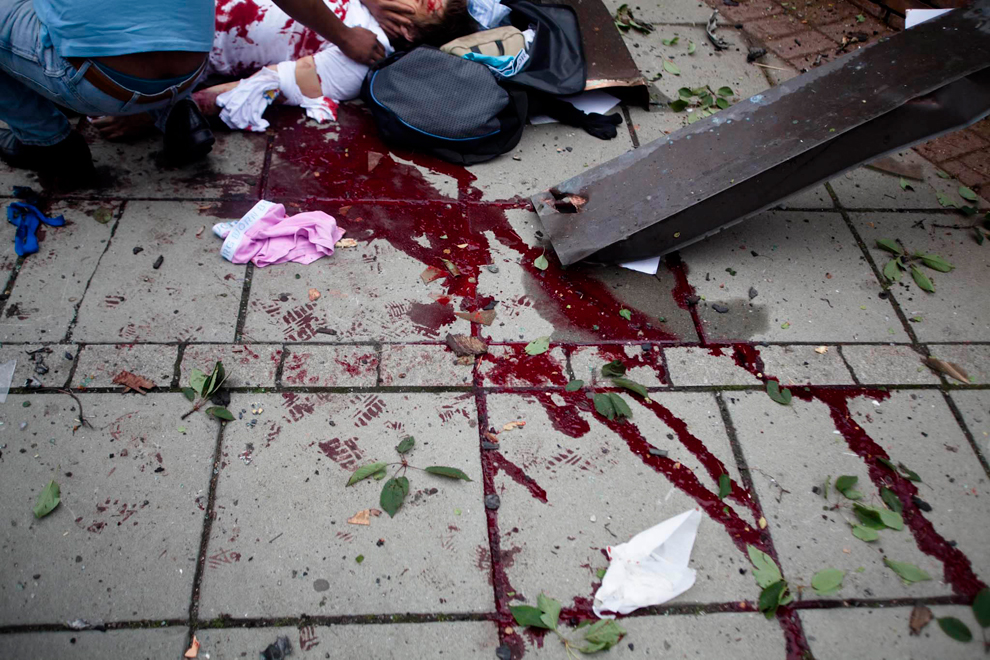 6
Blood smears the pavement, as a victim is treated outside government buildings in the center of Oslo, Friday July 22. (Fartein Rudjord/Associated Press) # 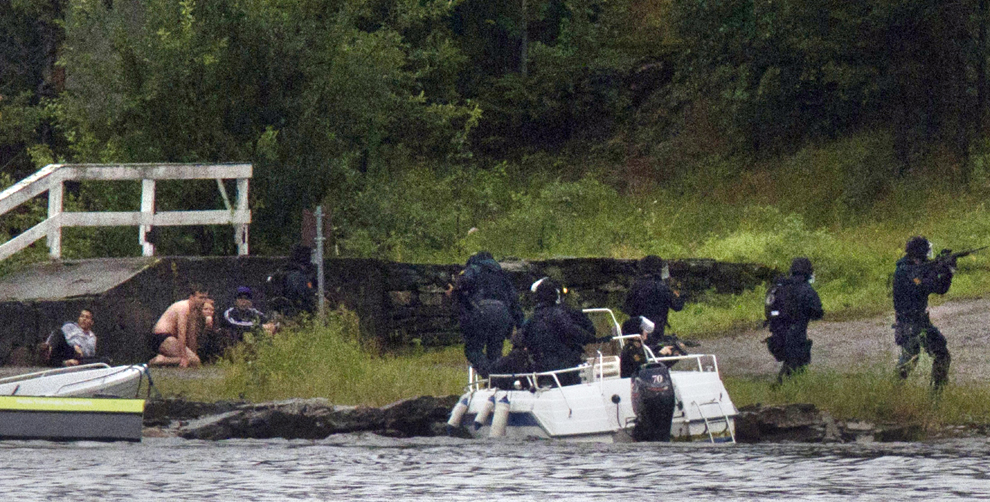 7
A swat team aimed their weapons while people take cover during a shoot out at Utoeya island, some 40 km south west of the capital Oslo on July 22. (Jan Bjerkeli/AFP/Getty Images) # 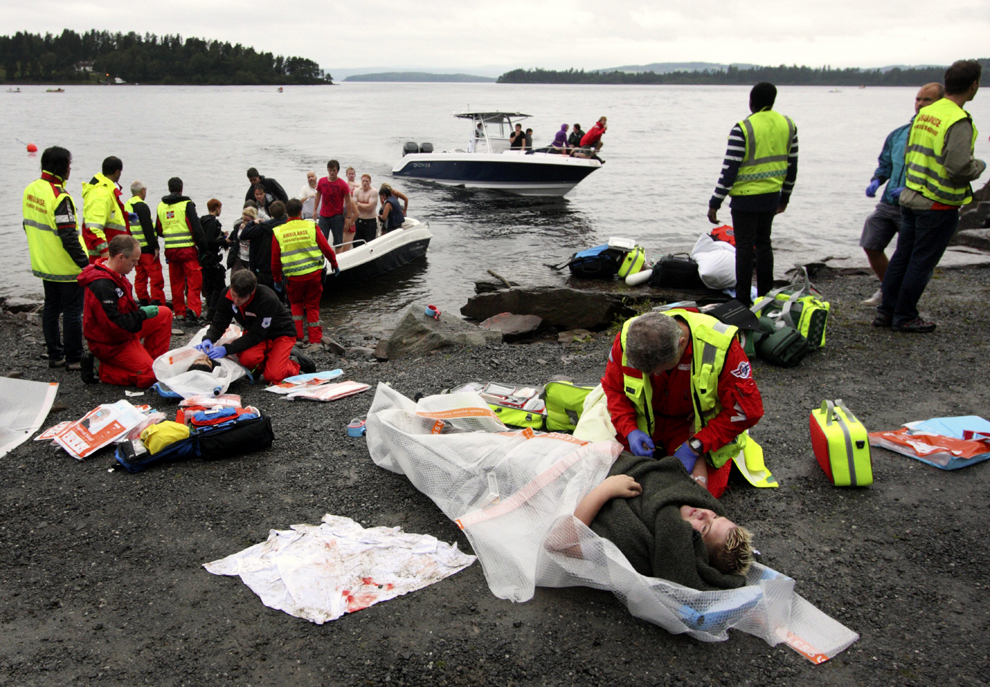 8
A wounded woman is brought ashore opposite Utaoya island after being rescued from a gunman who went on a killing rampage targeting participants in a Norwegian Labor Party youth organisation event on the island, some 40 km southwest of Oslo July 22. (Svein Gustav Wilhelmsen/AFP/Getty Images) # 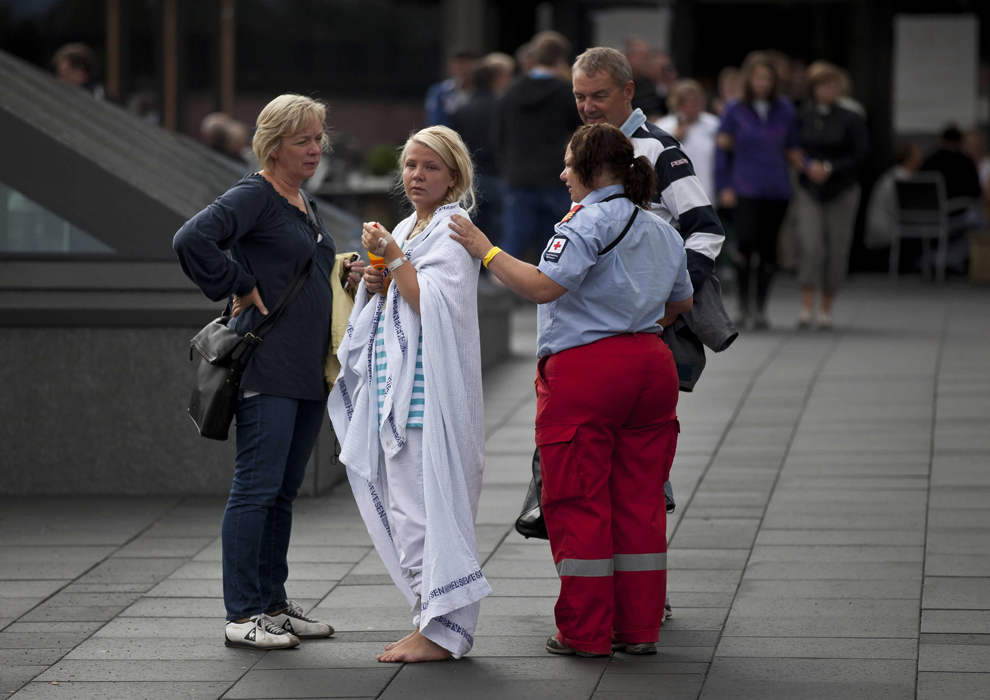 9
A medic comforts an unidentified survivor from the shooting at an island youth retreat outside a hotel where survivors are being reunited with family members in Norway July 23. (Matt Dunham/Associated Press) # 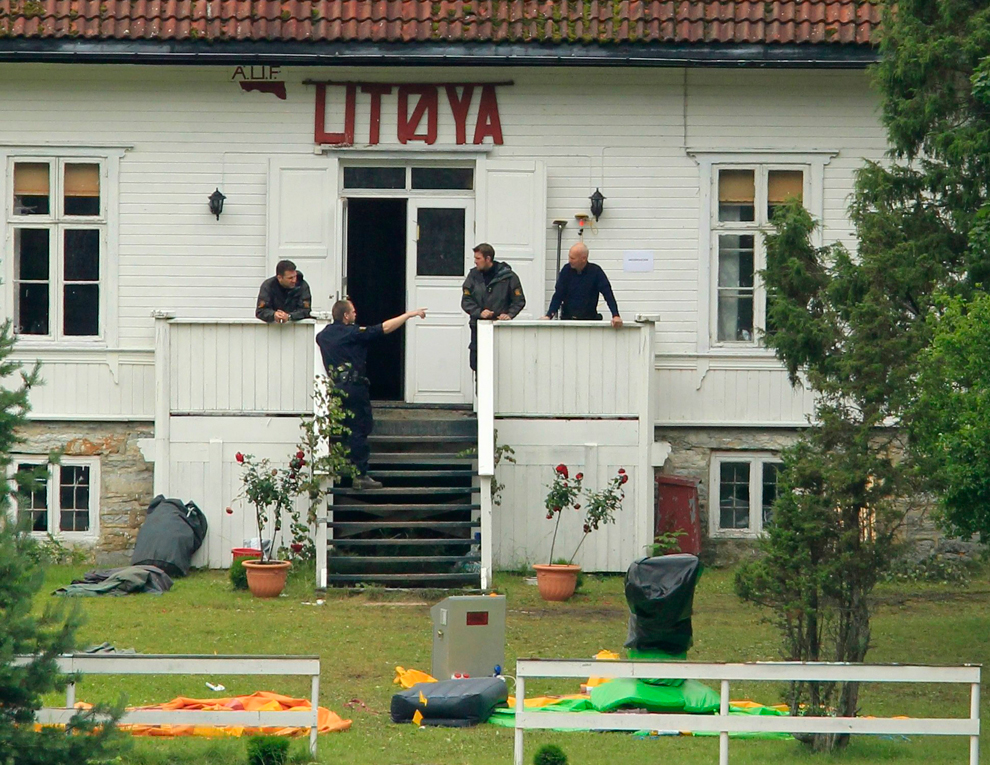 10
Police continue their investigations July 25 on the Utoya island in the Tyrifjorden lake in Norway were a shooting massacre at a youth camp took place Friday. The man who confessed to the twin attacks that killed 93 people in Norway will be arraigned in court Monday and has requested an open hearing for his first appearance so that he can explain his massacre to the public. (Terje Bendiksby/Associated Press) # 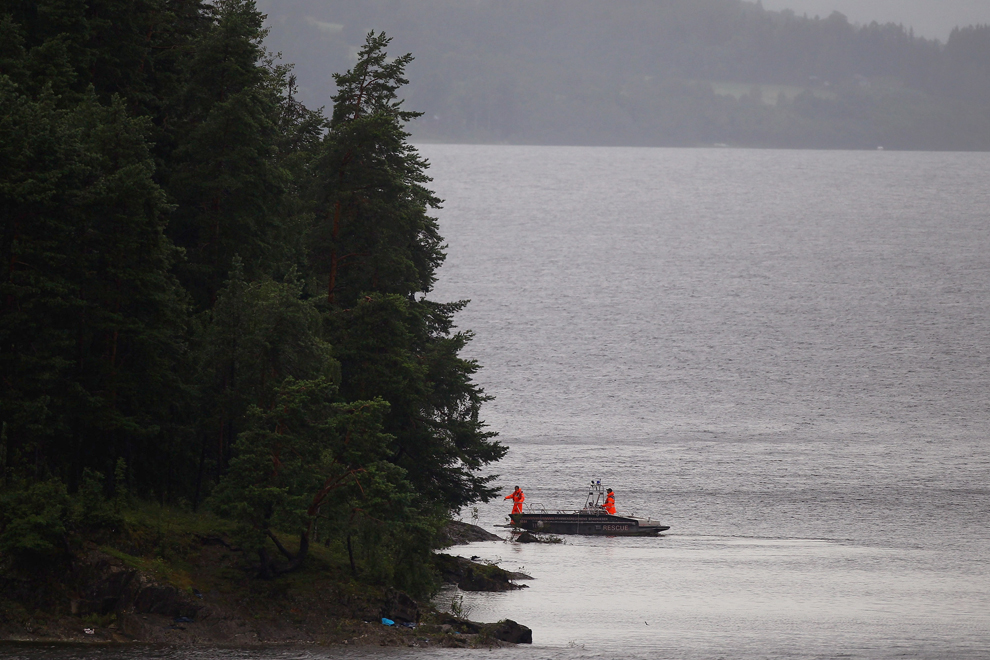 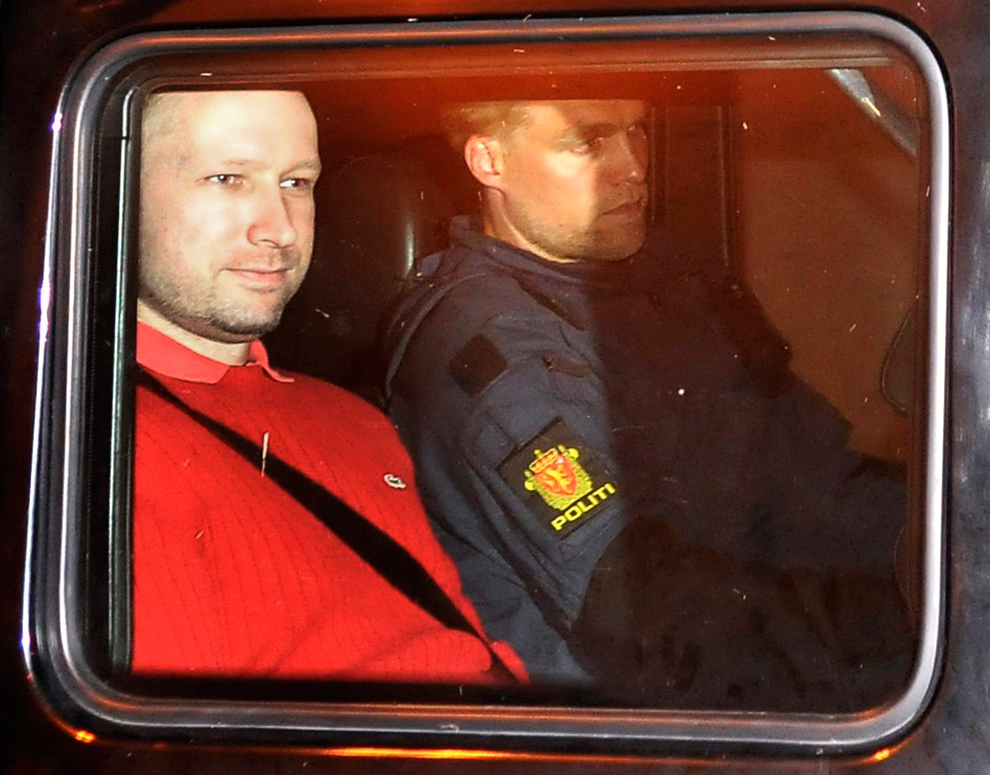 12
Norwegian Anders Behring Breivik (L), the man accused of a killing spree and bomb attack in Norway, sits in the rear of a vehicle as he is transported in a police convoy as he is leaving the courthouse in Oslo July. A judge ordered eight weeks detention on Monday for Breivik who has admitted a bombing and shooting massacre. (Jon-Are Berg-Jacobsen/Aftenposten via Scanpix) # 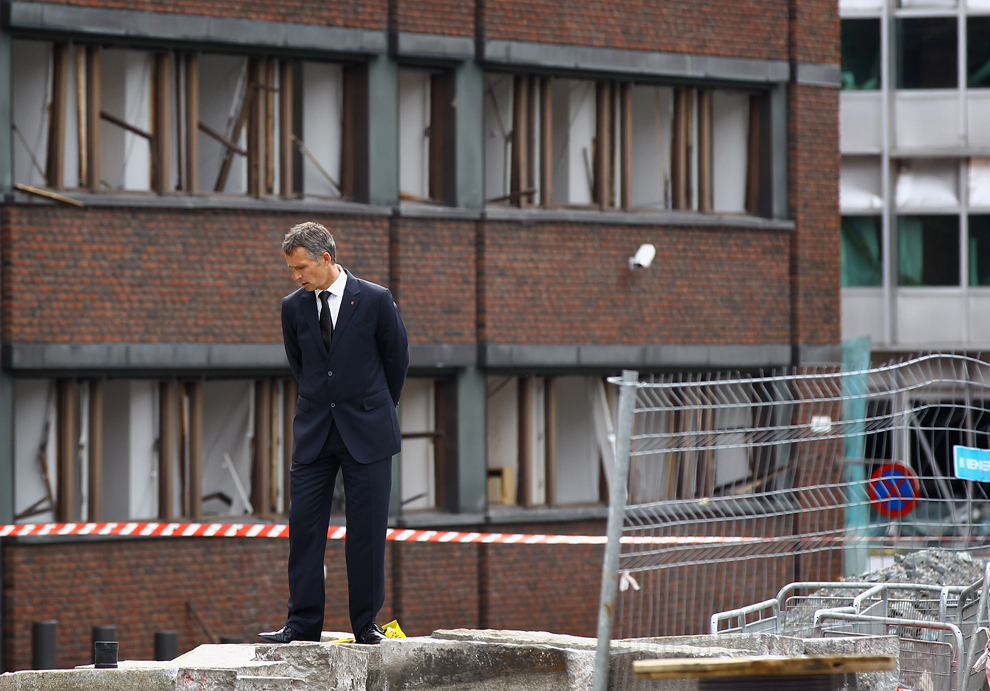 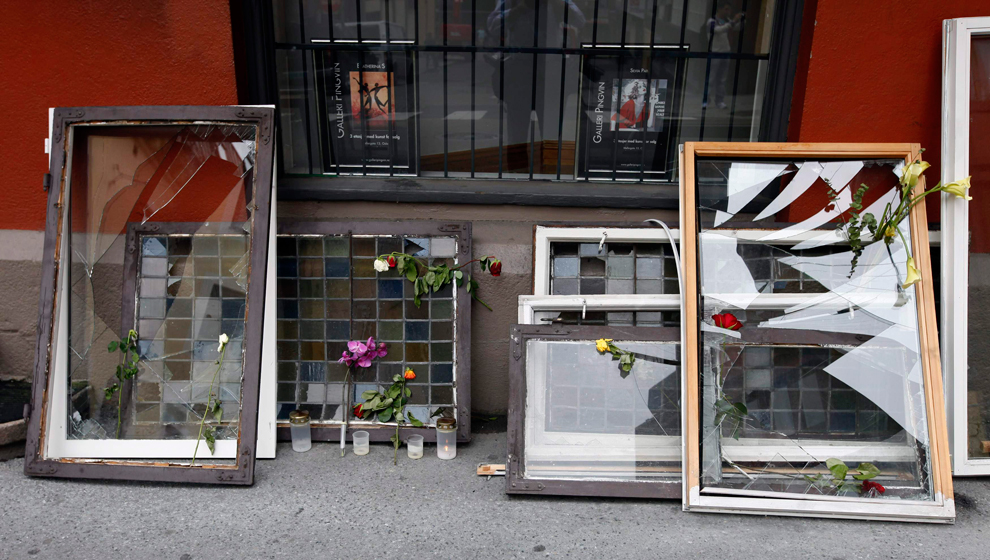 14
Destroyed windows are seen in a street near the damaged government building's area in Oslo July 27. (Fabrizio Bensch/Reuters) # 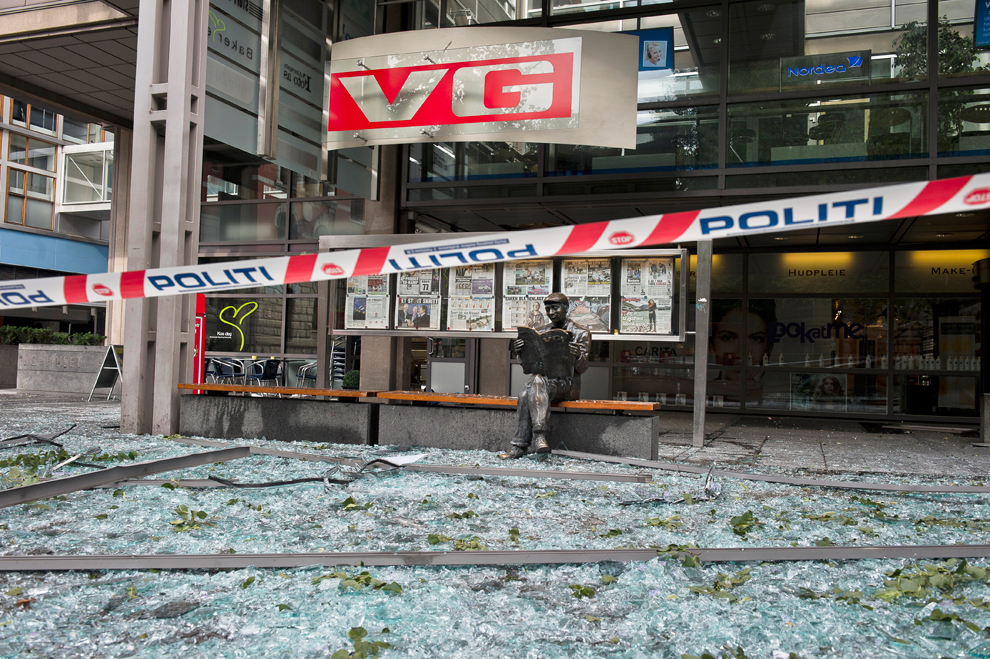 15
The damaged entrance of Norwegian newspaper VG building in Oslo on July 23 next to the government headquarters building area, a day after twin attacks here and on a youth camp, Norway's deadliest post-war tragedy. (Aleksander Andersen/AFP/Getty Images) # 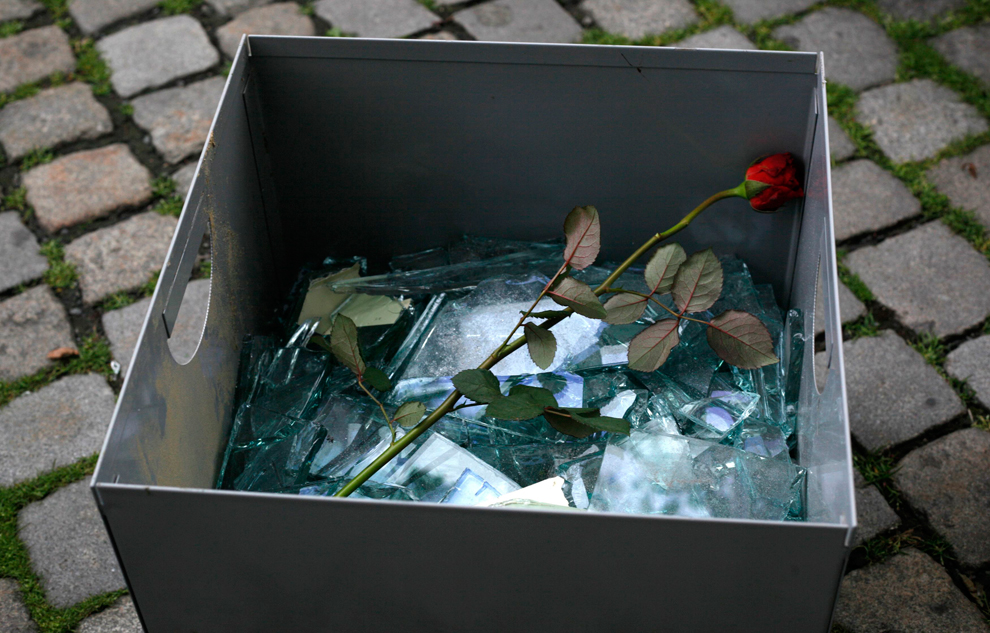 16
A rose is placed over shattered glass from the blast site after a memorial march to mourn for the victims of the killing spree and bomb blast in Oslo July 25. At least 100,000 people, many carrying white or red roses, rallied in Oslo on Monday to show support for victims of the attacks. (Wolfgang Rattay/Reuters) # 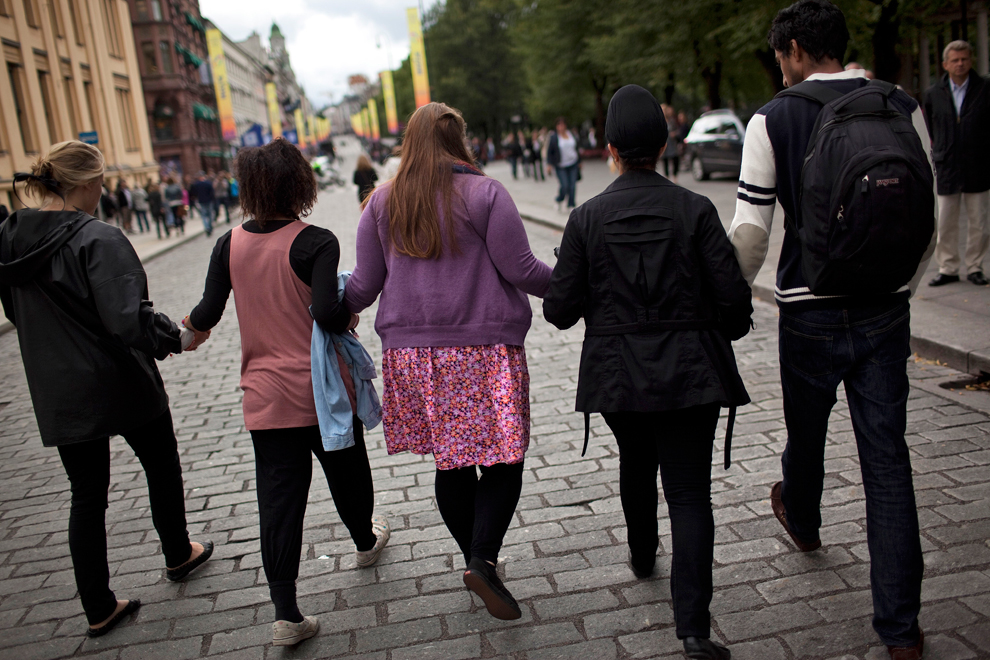 17
Survivors from the shooting at the island of Utoya walked along a street in central Oslo July 25. An Oslo district court judge decides to hold the arraignment for the suspect in the twin attacks in Norway behind closed doors, depriving him of the platform he's looking for to air his belief that Europe must be saved from Muslim colonization. (Emilio Morenatti/Associated Press) # 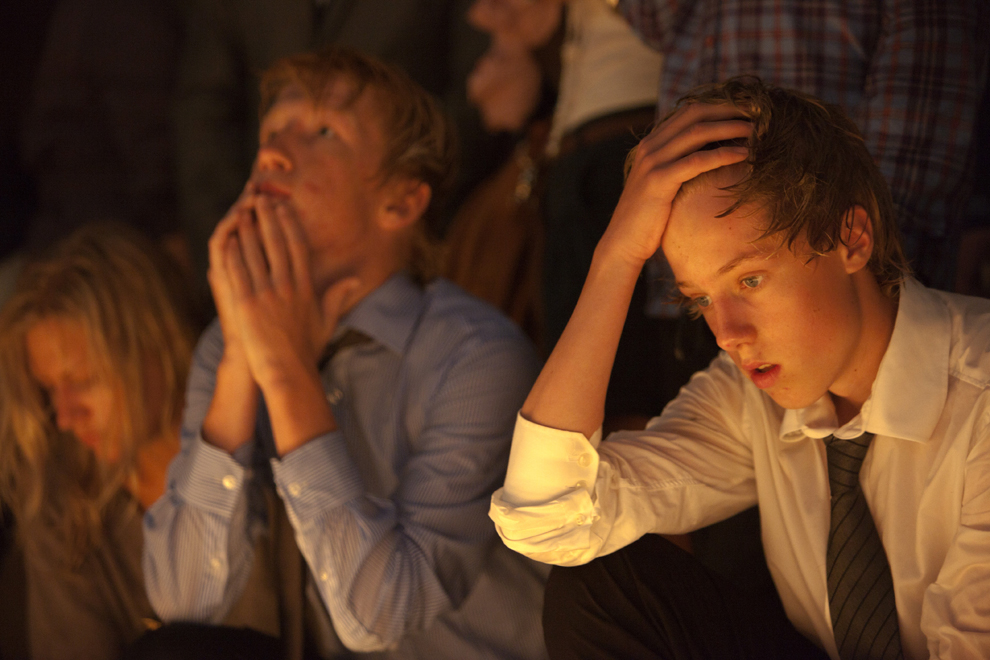 18
Friends and loved ones gather at the Oslo cathedral to mourn 93 victims killed in twin terror attacks from a bombing in downtown Oslo and a mass shooting on Utoya island on July 24. (Paula Bronstein/Getty Images) # 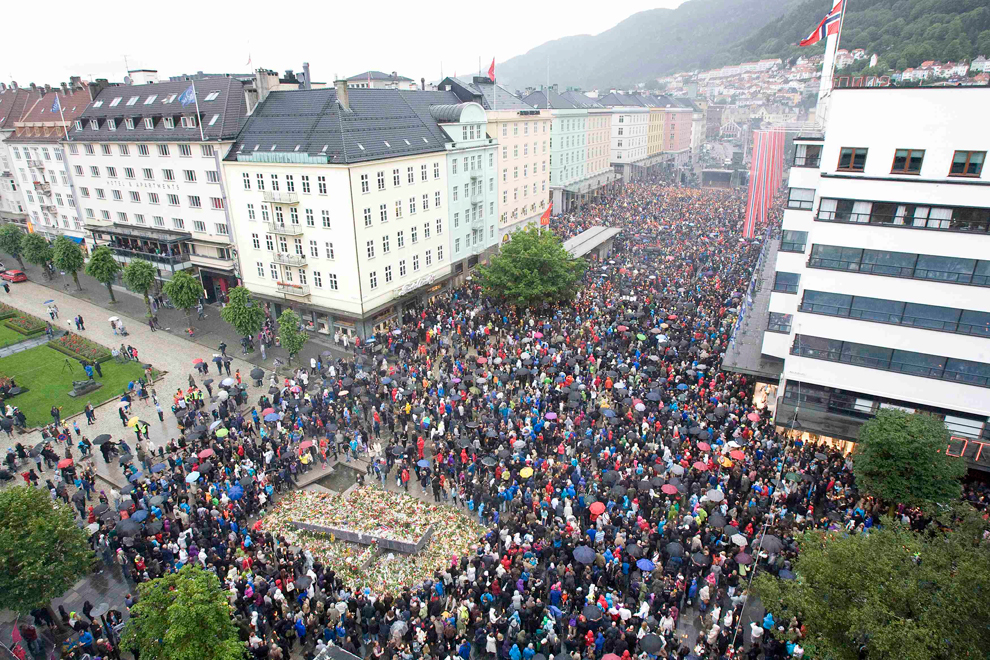 19
People gather in memory of those who died in the Oslo bomb attack and shooting spree in the city of Bergen, July 25. An estimated crowd of 20,000 people attended according to the police. (Thomas Anthun Nielsen/Reuters) # 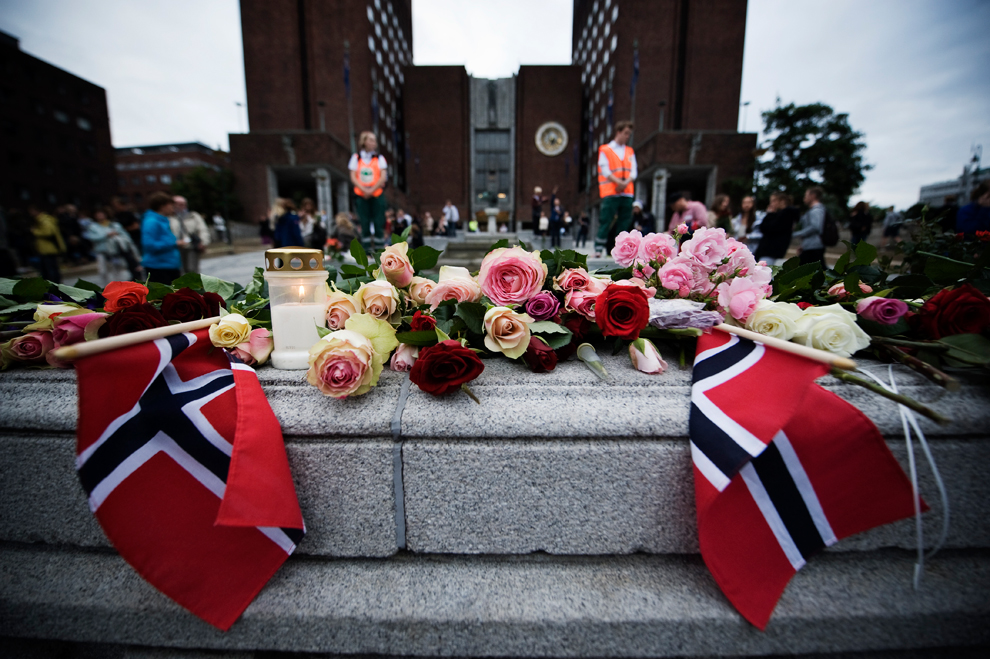 21
Oslo's town hall is decorated with flowers by some of the 150,000 people who gathered for a flower vigil on July 25 in Olso, during a show of solidarity with the victims of recent attacks in Norway. (Jonathan Nackstrand/AFP/Getty Images) # 23
A Norwegian girl draws a heart on a mural for victims of the twin attacks on Friday, in central Oslo, Norway July 23. (Emilio Morenatti/Associated Press) # 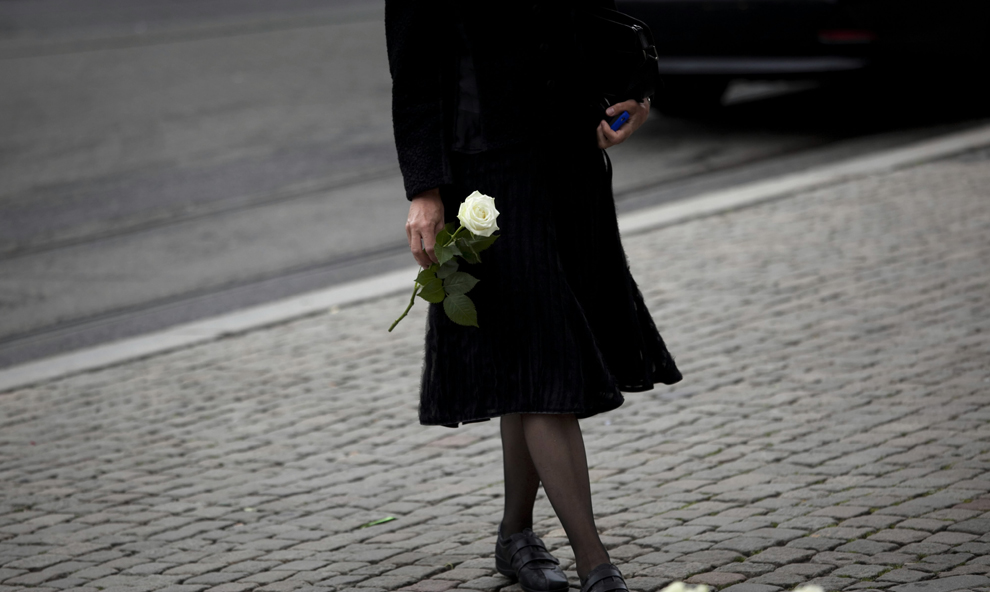 24
A woman holds a rose as she arrived to pay tribute to victims of the twin attacks at a memorial service at Oslo Cathedral July 24. (Emilio Morenatti/Associated Press) # 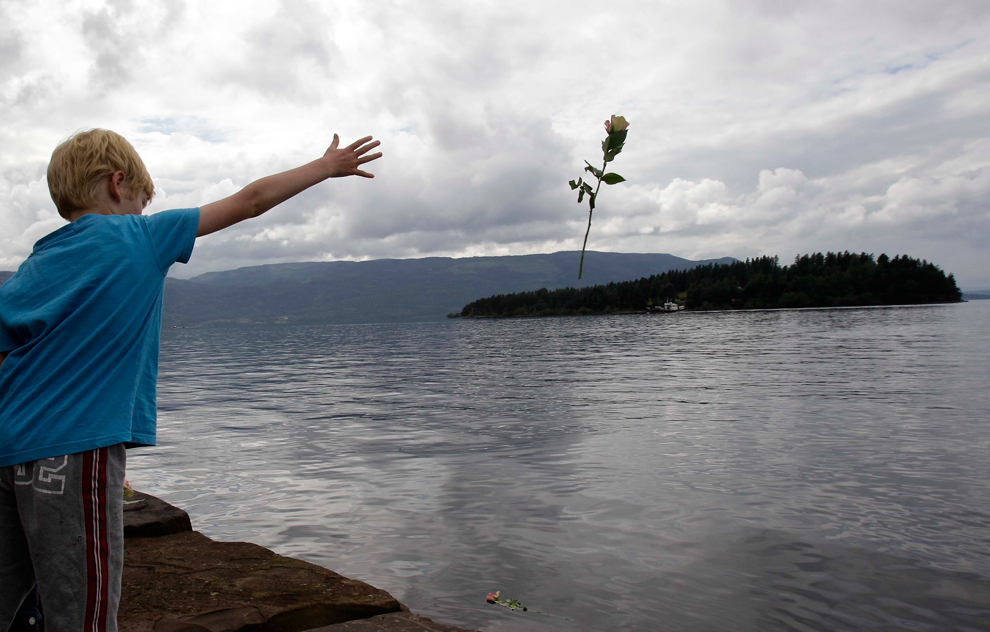 25
A young boy throws a rose into the lake opposite to the island of July 24. (Frank Augstein/Associated Press) # 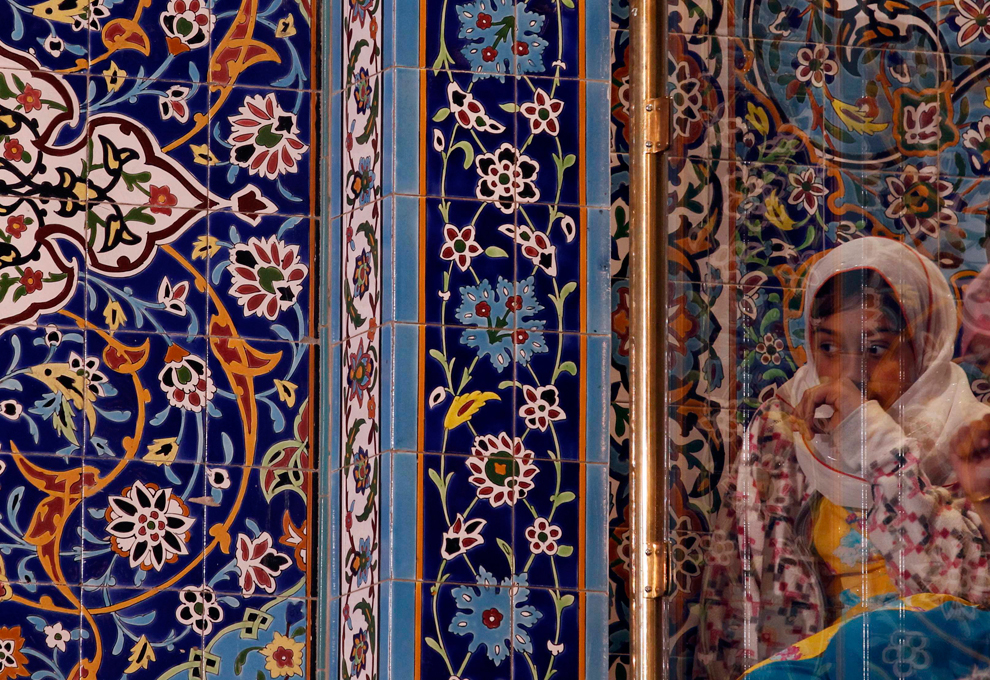 26
A girl looks on as Norway's Foerign Minister Jonas Gahr Store addresses inside the World Islamic Mission Mosque in Oslo July 26. Friday's attacks by Anders Behring Breivik traumatised normally peaceful Norway, which has been struggling to come to terms with its worst peace-time massacre of modern times. (Cathal McNaughton/Reuters) # 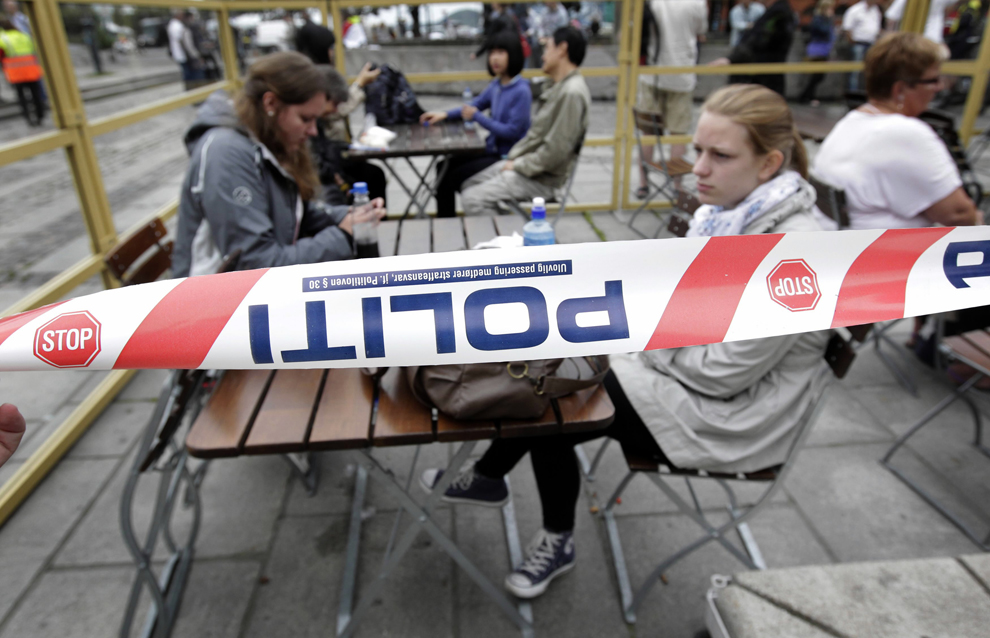 27
People sit outside a cafe near Oslo station July 27. Norway's prime minister on Wednesday pledged a security review after a mourning period for at least 76 people killed by a far-right zealot in bombing and shooting attacks that have traumatised the nation. Jittery Norwegians tried to restore some normality five days after the bloodletting, but a security alert forced the evacuation of Oslo station, keeping nerves on edge. (Cathal McNaughton/Reuters) # 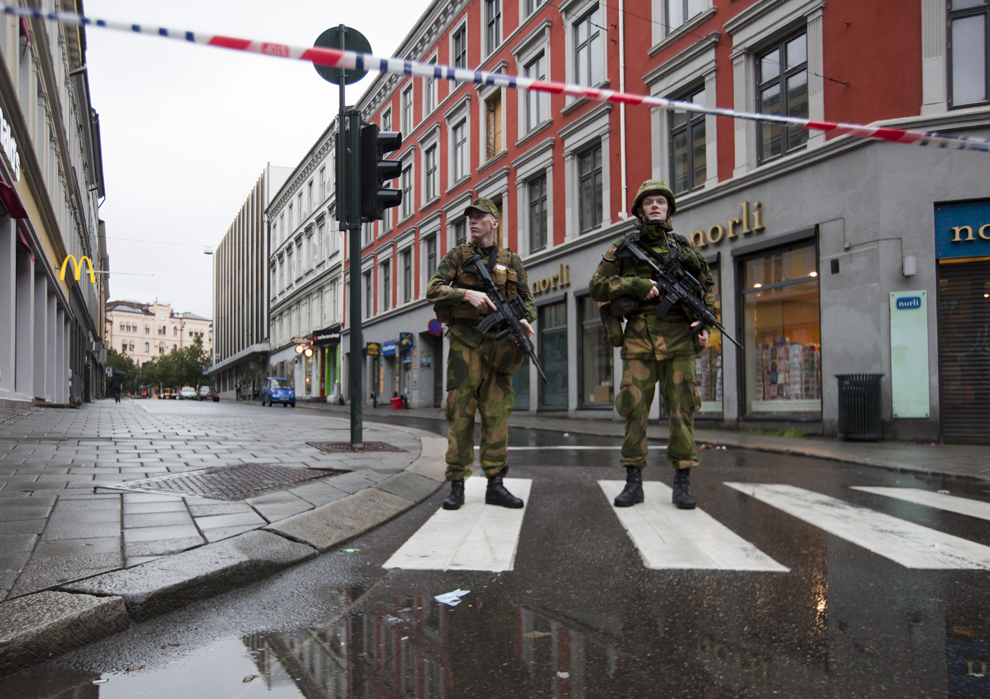 28
Norwegian military stand guard near the site of the bombing in the city centre, as people mourn the victims killed in twin terror attacks from the bombing in downtown Oslo and a mass shooting on Utoya Island on July 24. (Paula Bronstein/Getty Images) #

29
People gather outside Oslo City Hall to participate in a "rose march" in memory of the victims of Friday's bomb attack and shooting massacre July 25. (Emilio Morenatti/Associated Press) # 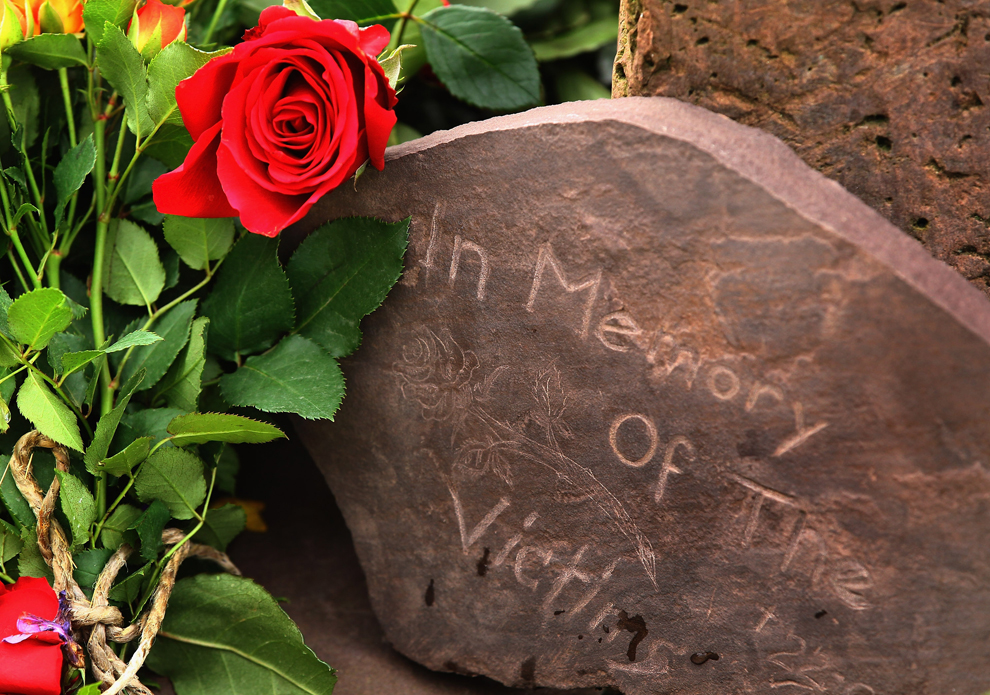 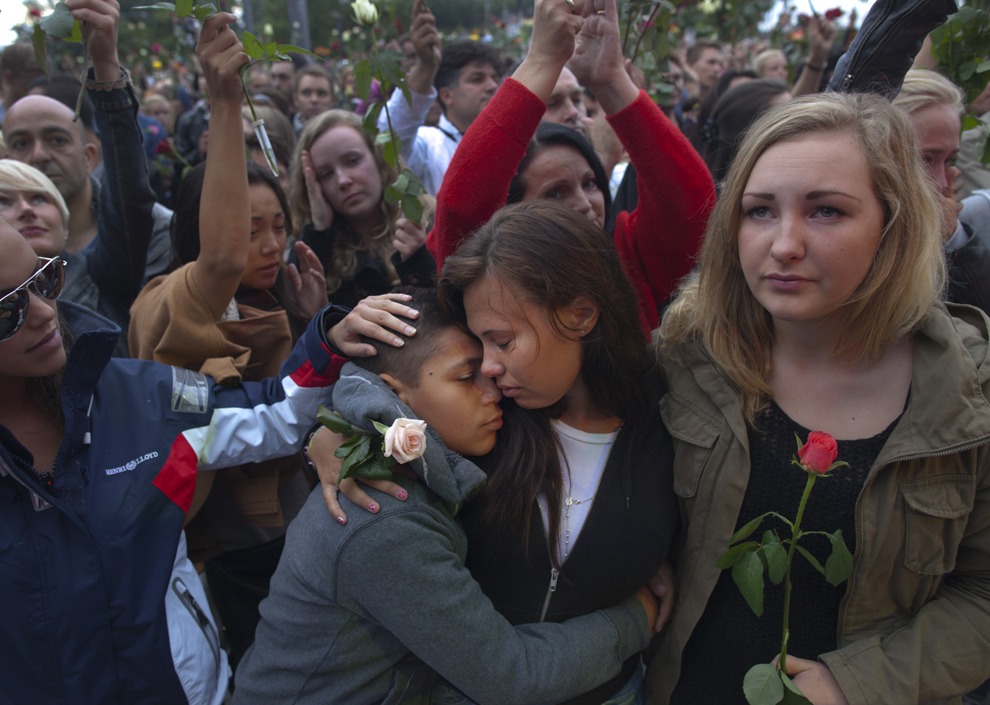 31
Norwegians hold roses and confort each other as thousands of people gather at a memorial vigil following Friday's twin extremist attacks on July 25 ,2011 in Oslo, Norway. Anders Behring Breivik, 32, claimed that he has "two more cells" working with him as he appeared in court today following a bomb blast at a government building in Oslo and a shooting massacre on nearby Utoya Island. (Paula Bronstein/Getty Images) # 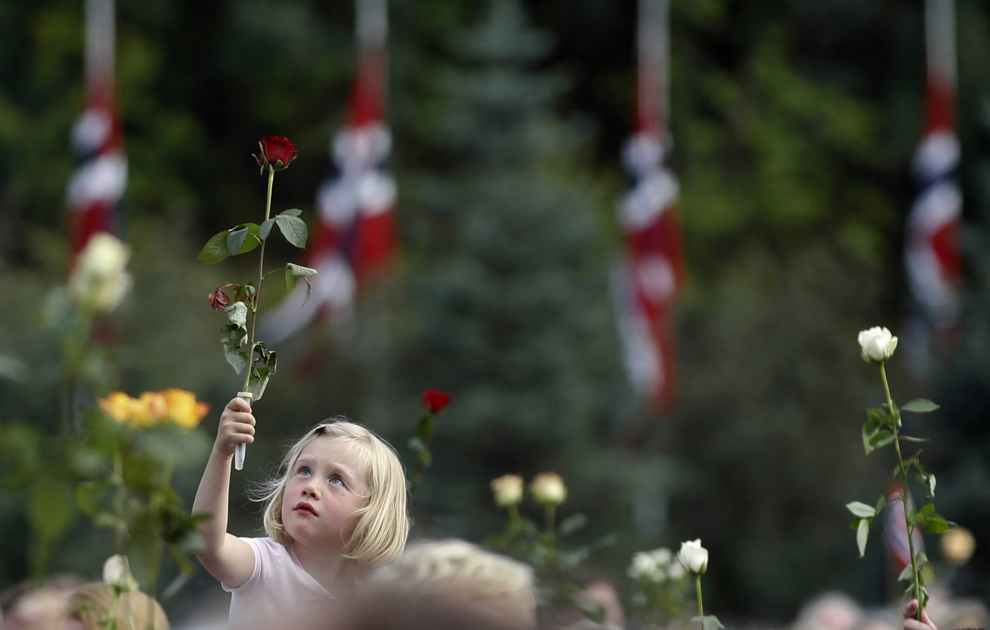 32
A girl holds a flower as she takes part in a march near Utoeya island to pay their respects for the victims of the killing spree and bomb attack in Norway, in the village of Sundvollen, northwest of Oslo, July 26, 2011. Norwegian Anders Behring Breivik is in all likelyhood "insane", his lawyer said after the anti-Islam radical admitted to the bomb and shooting spree in Norway on Friday that killed 76 people. (Fabrizio Bensch/Reuters) #