Barely a year after a similar eruption in Iceland forced the biggest closure of European airspace since World War II, the eruption of the Grimsvotn volcano, under the Vatnajokull glacier in southeast Iceland on May 21, 2011 has caused hundreds of travel delays. The ash cloud forced U.S. President Barack Obama to shorten a visit to Ireland and has raised some fears of a repeat of last year's huge travel disruptions across Europe when emissions from Eyjafjalljokull stranded millions of passengers. Although this disruption is said to be stronger than that of Eyiafjalljokull, it is not expected to have the same impact. Take a look back at two Big Picture posts from the 2010 Icelandic volcano eruption: Iceland's disruptive volcano and More from Eyiafjallajokull. -- Paula Nelson (24 photos total) 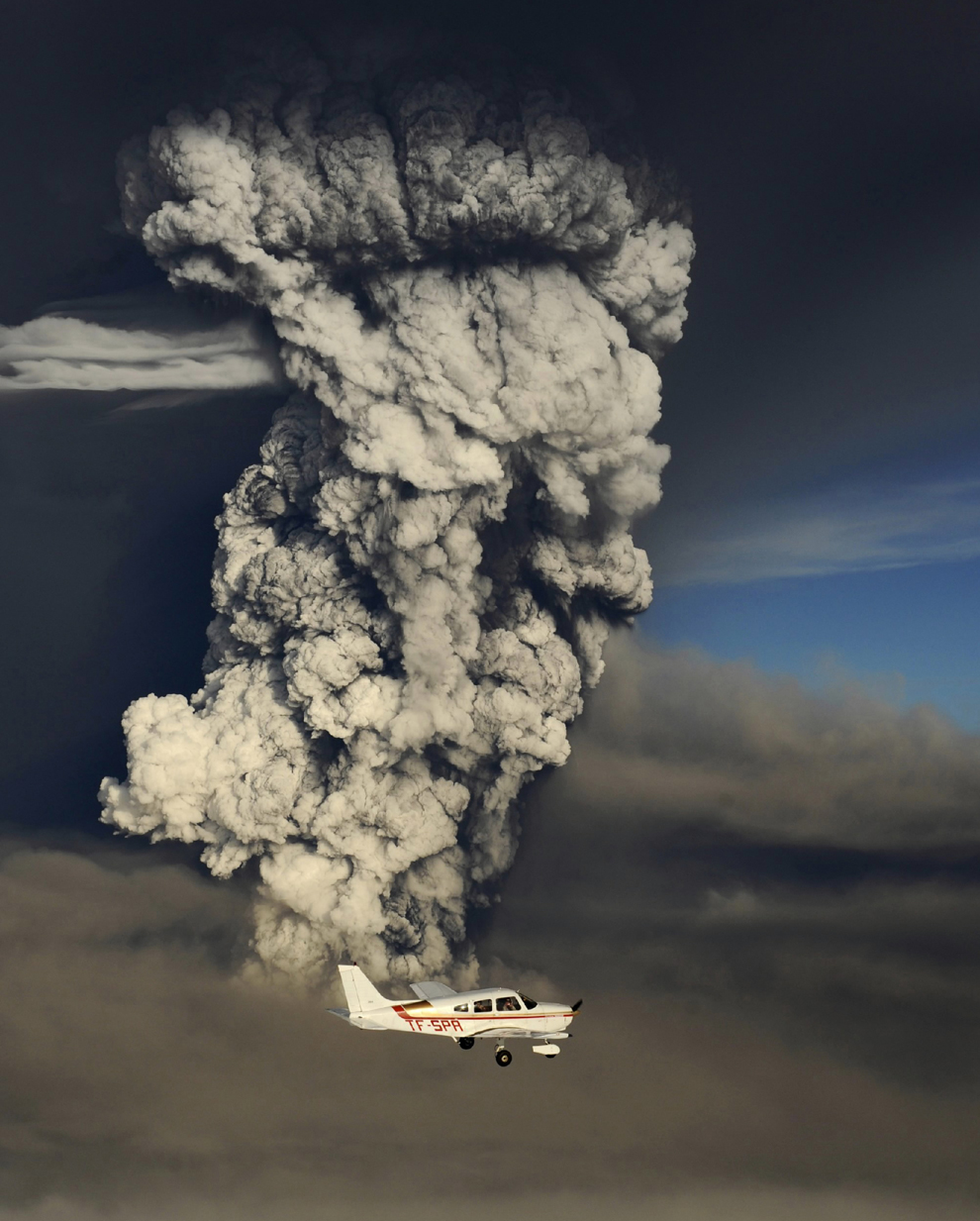 A plane flies past a smoke plume resulting from the eruption of the Grimsvotn volcano, under the Vatnajokull glacier in southeast Iceland, May 21, 2011. Airlines began canceling flights to Britain because of the ash cloud from the volcano reaching its airspace, although experts expected no repeat of travel chaos from the eruption of Eyjafjallajokull a year ago. (Olafur Sigurjonsson/Reuters) 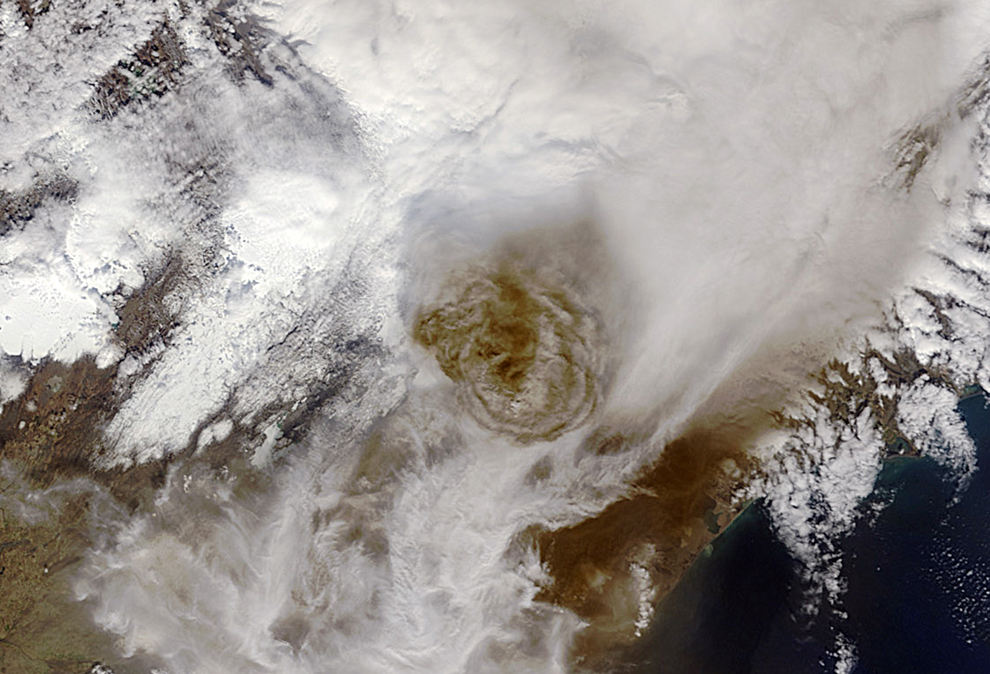 2
An image released by the Nasa Earth Observatory, May 24, 2011, captured by the Moderate Resolution Imaging Spectroradiometer (MODIS) on NASA's Terra satellite at 13:00 UTC, May 22, 2011 shows the ash column billowing from the Grimsvoetn volcano. European air traffic controllers said that 252 flights had been cancelled as a volcanic ash cloud covered Scotland and Northern Ireland. (HO/AFP/Getty Images) # 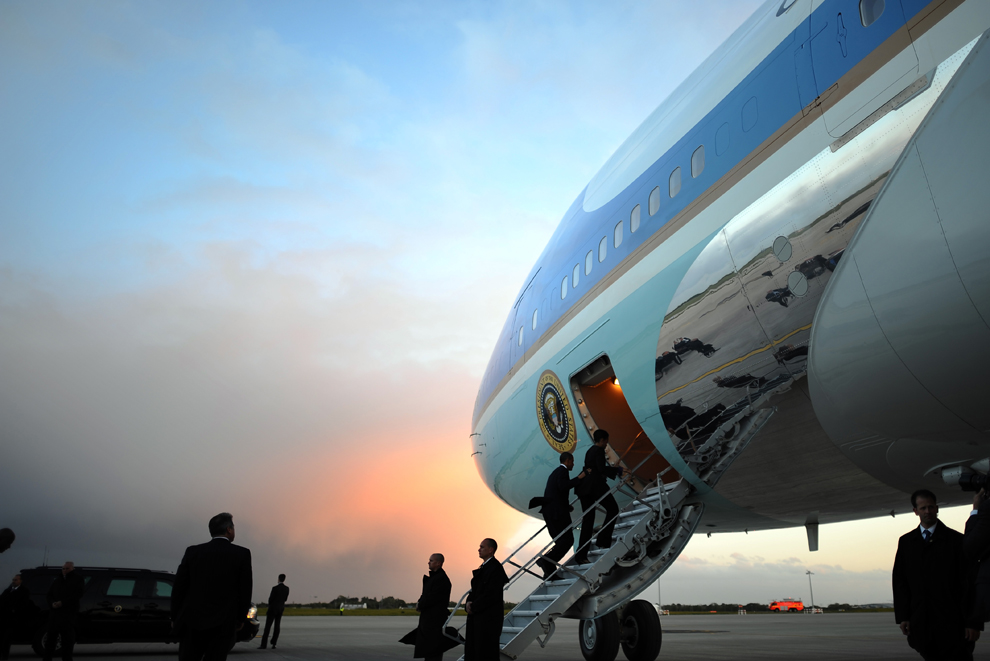 3
U.S. President Barack Obama and First Lady Michelle Obama board Air Force One at the airport in Dublin, May 23, 2011 en route to London. Obama was forced to leave Ireland a day ahead of schedule to fly to London as a cloud of ash from an Icelandic volcano drifted towards Britain. (Jewel Samad/AFP/Getty Images) # 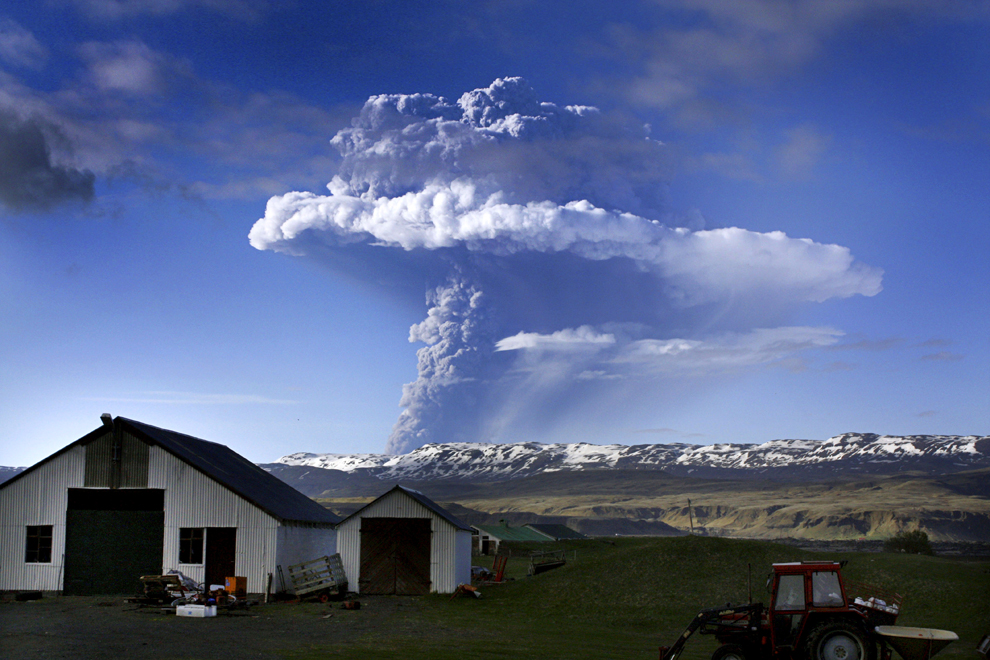 4
A cloud of smoke and ash is seen over the Grimsvoetn volcano in Iceland, May 21, 2011. The cloud rising up from Grimsvoetn as a result of the eruption was seen for the first time around 1900 GMT and in less than an hour it had reached an altitude of 11 kilometres (6.8 miles), according to the Icelandic Meteorological Institute. (STR/AFP/Getty Images) # 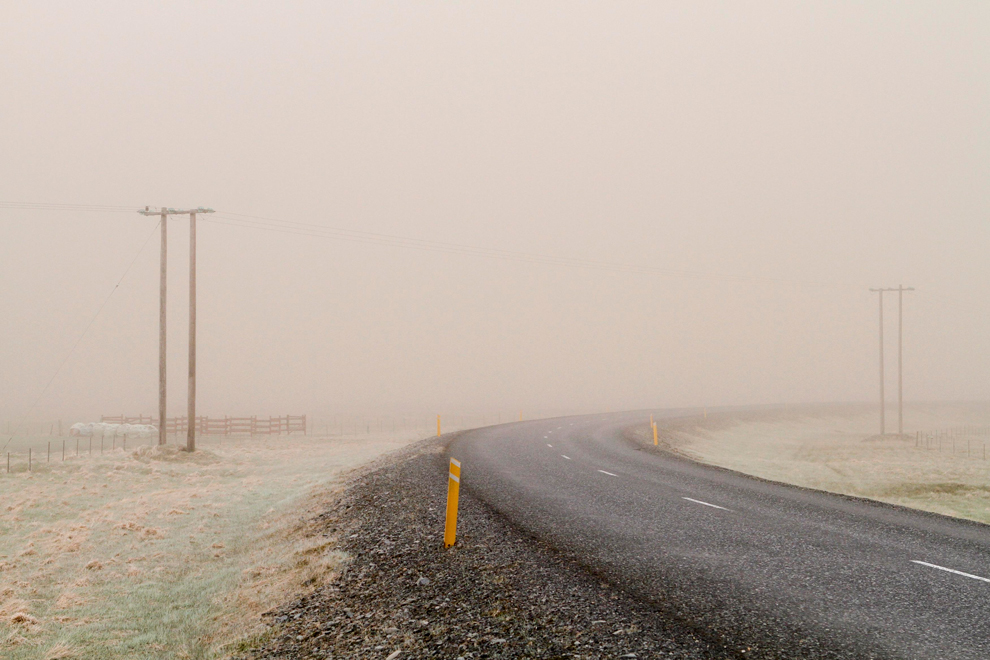 5
The road near the village of Kirkjubaejarklaustur, May 24, 2011. People living next to the glacier where the Grimsvotn volcano burst into life were most affected, with ash shutting out the daylight and smothering buildings and vehicles. The outburst is the volcano's most powerful since 1873 and stronger than the Eyjafjallajokull volcano which caused trouble last year. Scientists say this type of ash less easily dispersed but winds have so far been more favorable. (Ingolfur Juliusson/Reuters) # 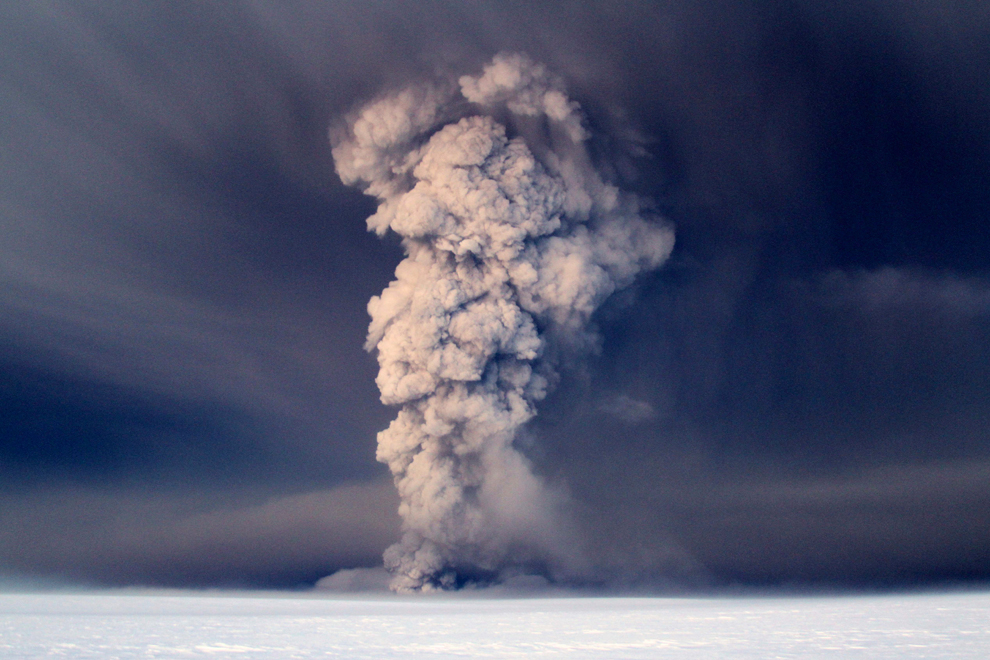 6
Smoke plumes rise from the Grimsvotn volcano, which lies under the Vatnajokull glacier, about 120 miles, (200 kilometers) east of the capital, Rejkjavik. The volcano began erupting May 21, 2011 for the first time since 2004. Iceland closed its main international airport and canceled domestic flights as the powerful volcanic eruption sent a plume of ash, smoke and steam 12 miles (20 kilometers) into the air. (Jon Gustafsson/Associated Press) # 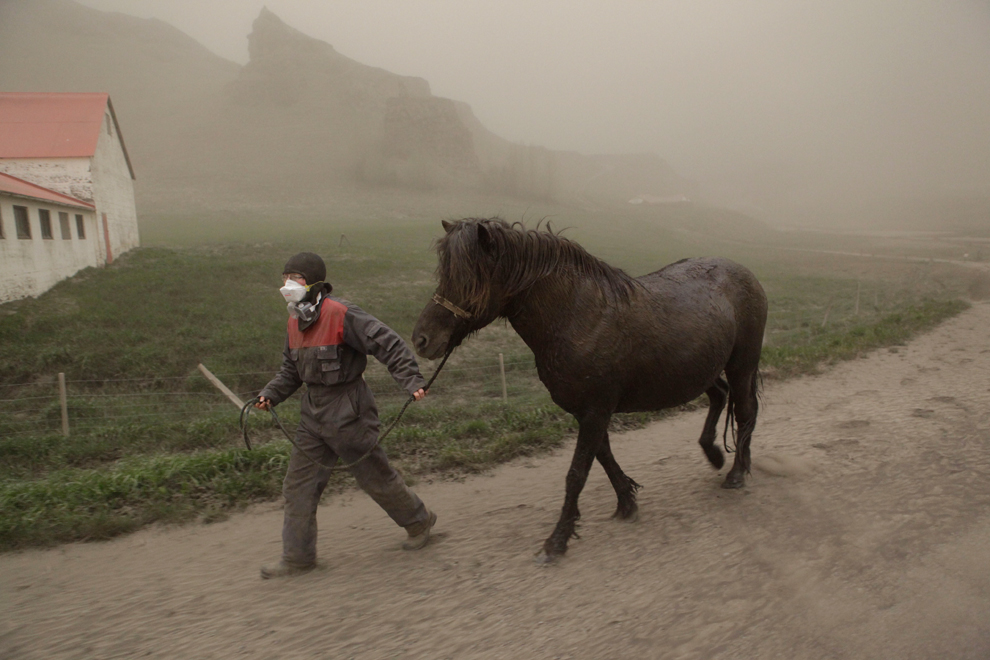 7
Anna Hardadottir, a farmer from Horgsland, leads a horse, through the ash pouring out of the erupting Grimsvoetn volcano, May 22, 2011. Ash deposits were sprinkled over the capital Reykjavik, some 400 kilometres (250 miles) to the west of the volcano, which has spewed an ash cloud about 20 kilometres into the sky. Less than 24 hours after the eruption began late May 21, experts and authorities in Iceland said the volcanic activity had begun to decline. (Vilhelm Gunnarsson/AFP/Getty Images) # 8
Sheep farmers try to round up a flock as they walk through a cloud of ash pouring out of the erupting Grimsvoetn volcano in Mulakot, May 22, 2011. (Vilhelm Gunnarsson/AFP/Getty Images) # 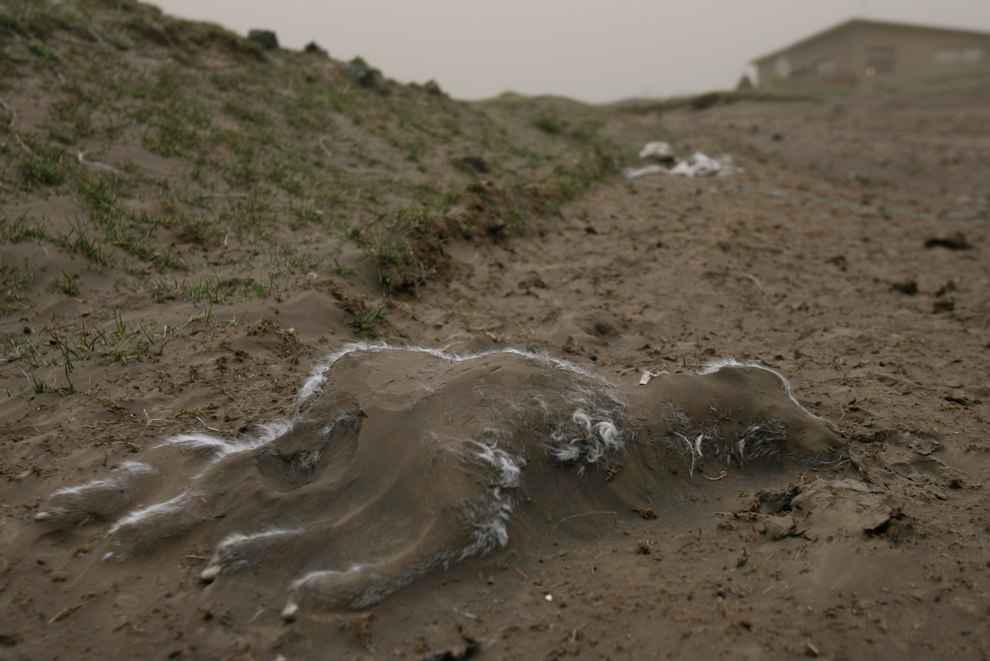 9
A dead lamb lies covered in ash near Kirkjubaearklaustur 260 km (162 miles) from ReykjavÃk, Iceland, May 24 2011. Experts say that particles in the ash could stall jet engines and sandblast planes' windows. The ash cloud forced US President Barack Obama to shorten a visit to Ireland and has raised fears of a repeat of huge travel disruptions in Europe last year when emissions from another of Iceland's volcanos, Eyjafjalljokull, stranded millions of passengers.(Brynjar Gauti/Associated Press) # 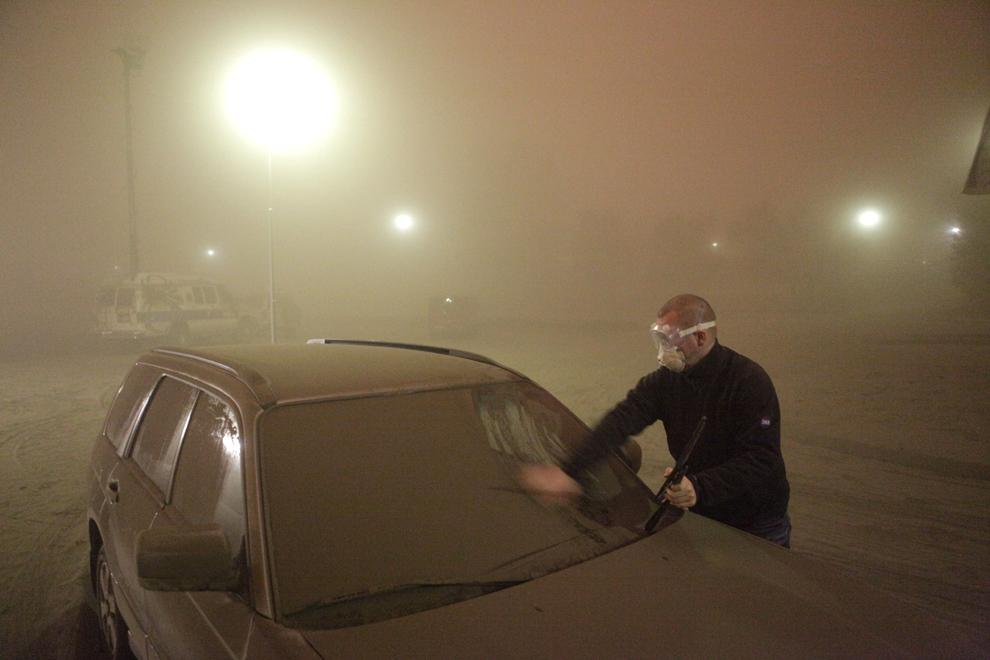 10
A man clears the windshield of his car during daylight hours in Kirkjbaejarklaustur, near the Grimsvoetn volcano, May 23, 2011. Activity at Iceland's erupting volcano has slowed significantly and its flight-halting ash plume has dropped to a quarter of its peak. (Vilheldm Gunnarsson/AFP/Getty Images) # 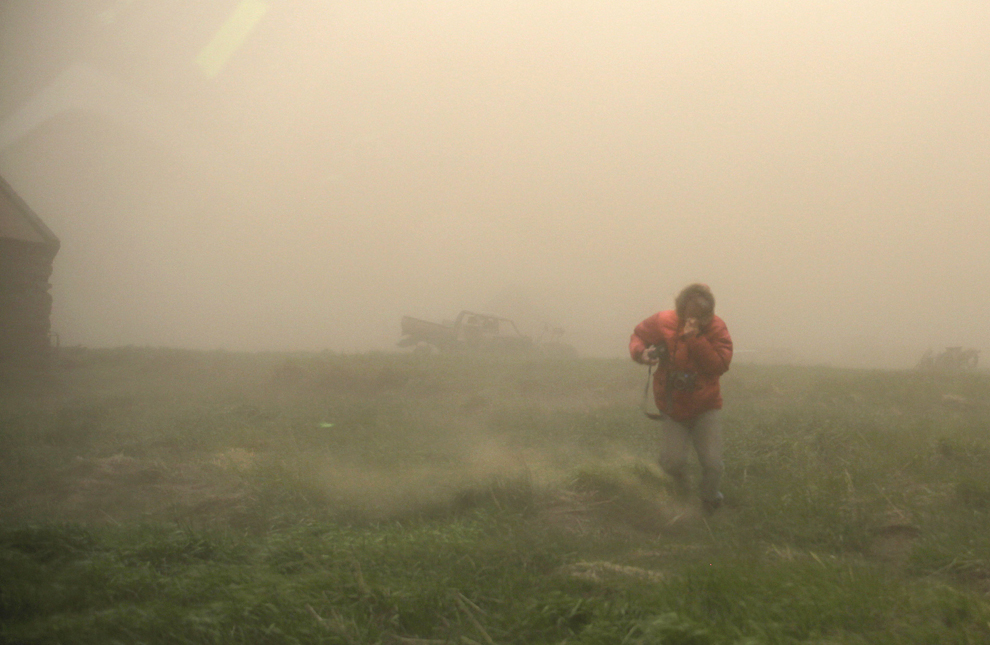 11
A man walks over a field in the settlement of Vik near the Grimsvoetn volcano, May 23, 2011. (Thorvaldur Kristmundsson/AFP/Getty Images) # 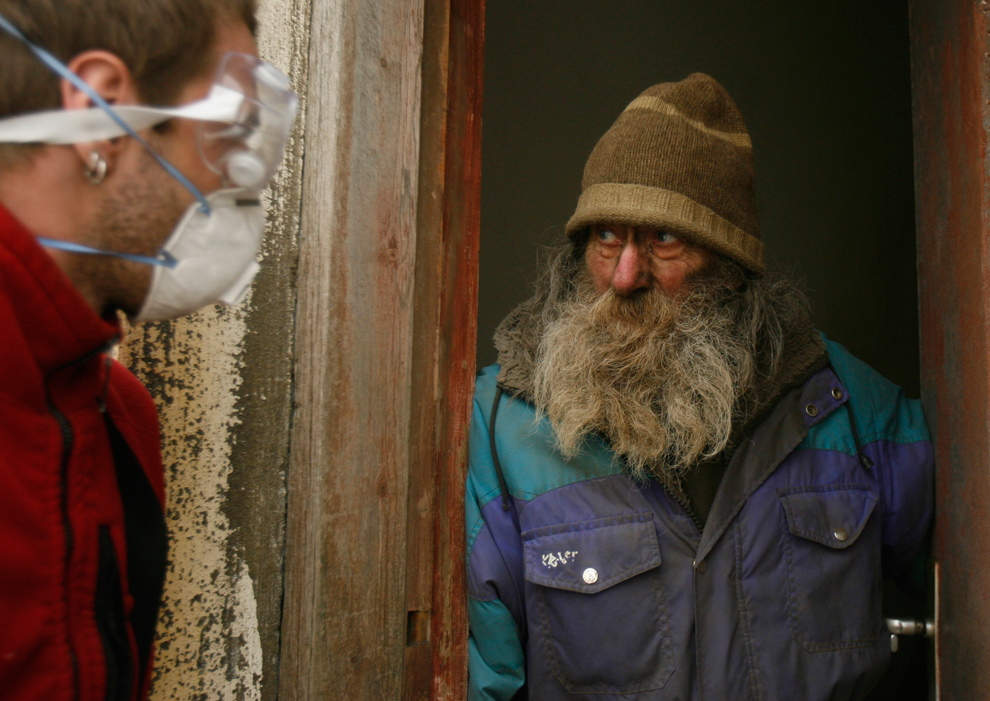 12
A member of a rescue team checks on a farmer near Kirkjubaearklaustur, approx. 260 km from Reykjavik, Iceland, May 23, 2011. A dense cloud of ash from an Icelandic volcano was being blown toward Scotland forcing two airlines to cancel their flights. (Brynjar Gauti/Associated Press ) # 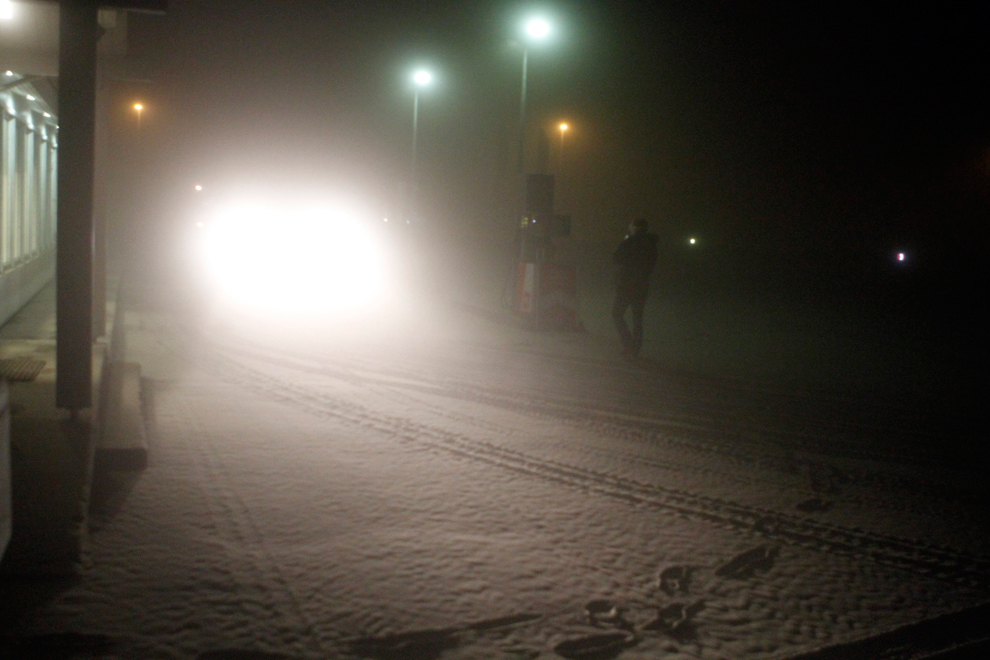 13
Ash covers the surface of the ground outside a gas station in Kirkjubaejarklaustur, May 22, 2011. Iceland's most active volcano erupted hurling a plume of ash and smoke far into the sky, which aviation officials were closely monitoring after another volcano shut European airspace for days last year. Authorities banned flights close to the Grimsvotn volcano. (Ingolfur Juliusson/Reuters) # 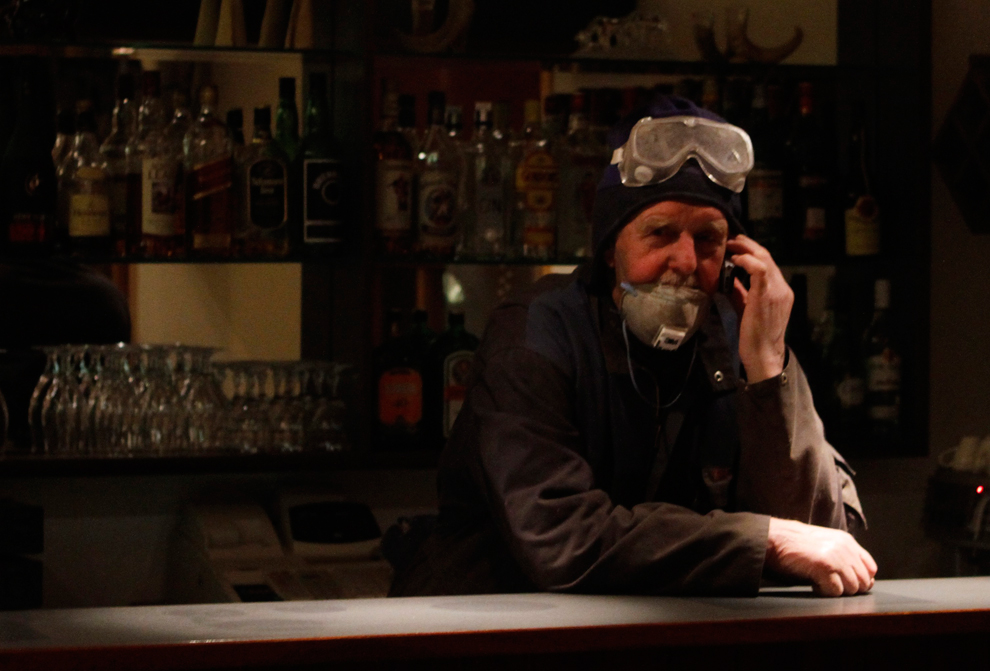 14
Farmer and hotel owner Gisli Kjartanson rests at the bar in his empty hotel, Geirland, near Kirkjubaejarklaustur, May 23, 2011. People living next to the glacier where the Grimsvotn volcano burst into life were most affected, with ash shutting out the daylight and smothering buildings and vehicles. The outburst is the volcano's most powerful since 1873 and stronger than the Eyjafjallajokull volcano which caused havoc last year. (Ingolfur Juliusson/Reuters) # 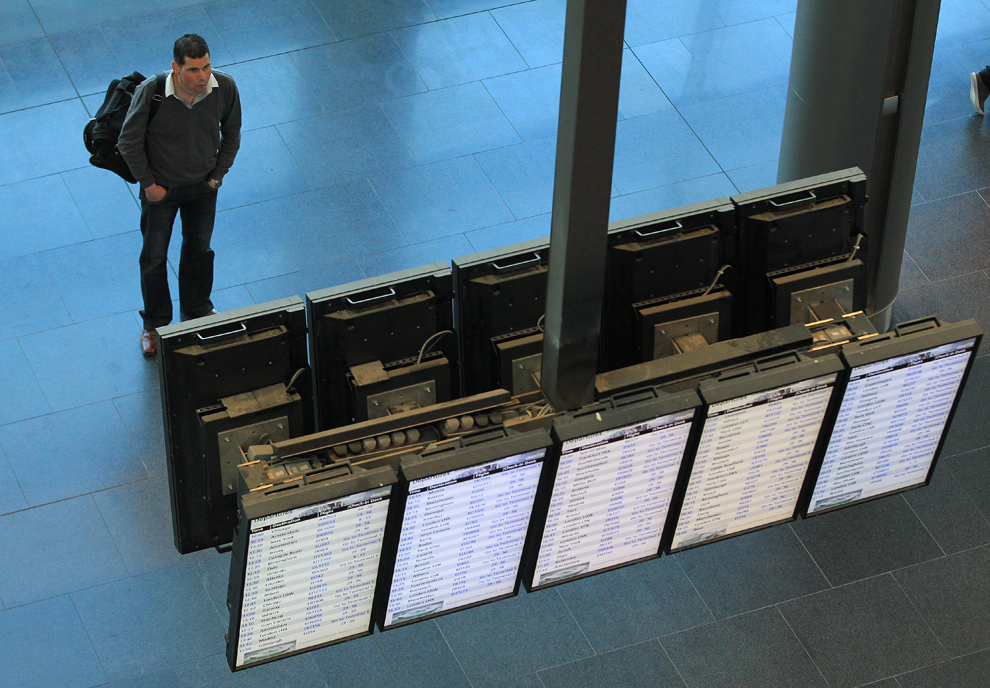 15
A passenger looks at the flight information boards at Dublin International airport in Ireland, May 24, 2011. Airlines grounded hundreds of flights after a plume of ash from a volcano in Iceland blanketed Britain and touched Scandinavia in a fresh travel nightmare for thousands of passengers. (Peter Muhly/AFP/Getty Images) # 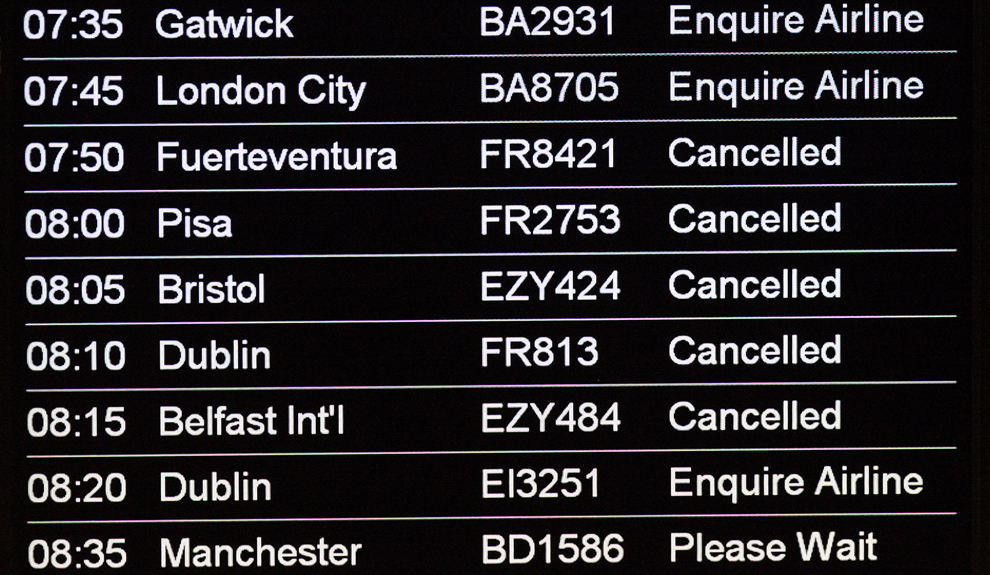 16
A departure board shows canceled flights as the airport remains open with limited flights at Edinburgh Airport in Edinburgh, Scotland, May 24, 2011. A dense ash cloud from an Icelandic volcano blew toward Scotland, causing airlines to cancel flights and raising fears of a repeat of last year's huge travel disruptions in Europe that stranded millions of passengers. (Scott Heppell/Associated Press) # 17
A deserted check-in area at Keflavik airport, Keflavik, Iceland, May 22, 2011, as Iceland closed its main international airport and canceled domestic flights. The eruption was far larger than one a year ago that caused international travel chaos, but scientists said it was unlikely to have the same widespread effect. (Brynjar Gauti/Associated Press) # 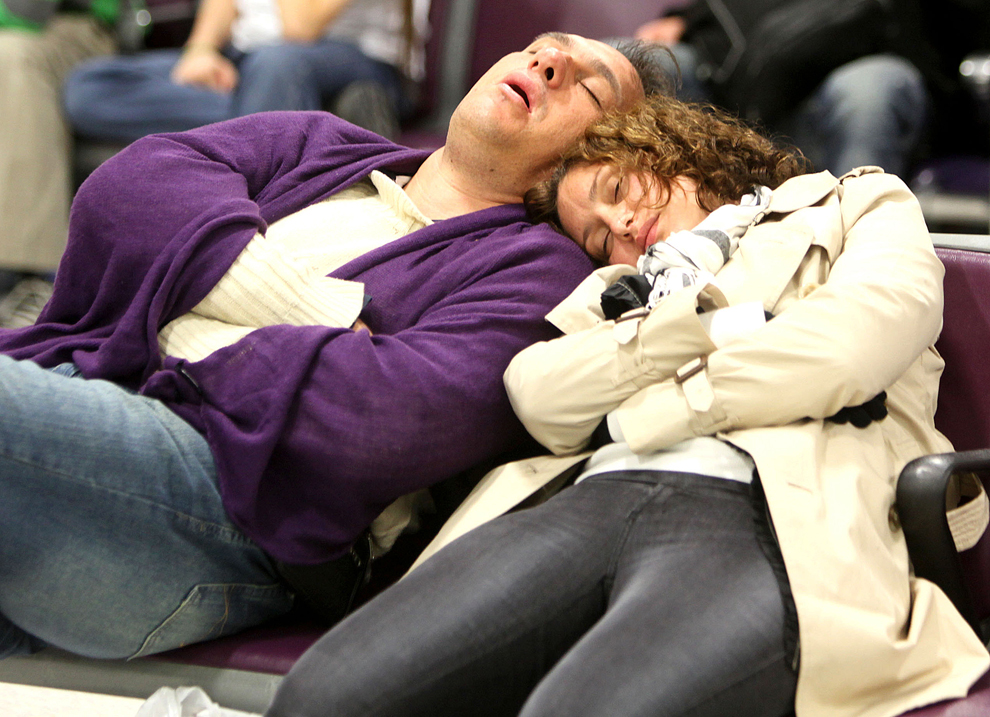 18
Airline passengers sleep as they wait for flights at Edinburgh airport in Scotland, May 24, 2011. (STR/AFP/Getty Images) # 19
Airline passengers wait for flights at Edinburgh airport in Scotland, May 24, 2011. Airlines halted hundreds of flights after a plume of ash from an erupting volcano in Iceland blew over Britain, even forcing US President Barack Obama to revise his travel plans. Barely a year after a similar eruption in Iceland forced the biggest closure of European airspace since World War II. (STR/AFP/Getty Images) # 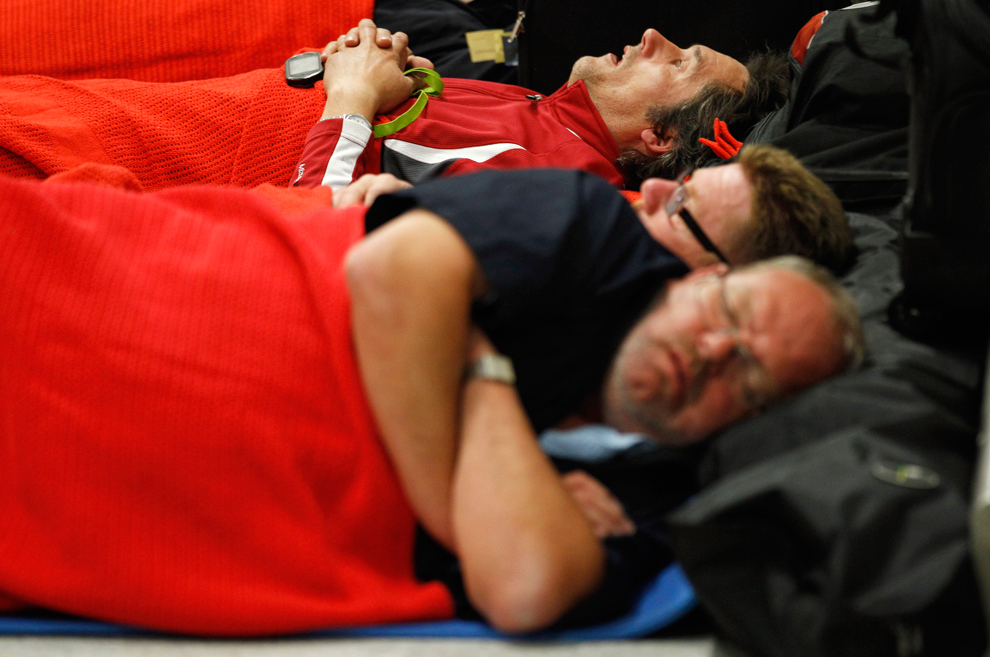 20
Passengers sleep on the floor in the main terminal at Edinburgh Airport, in Scotland, May 24, 2011. (David Moir/Reuters) # 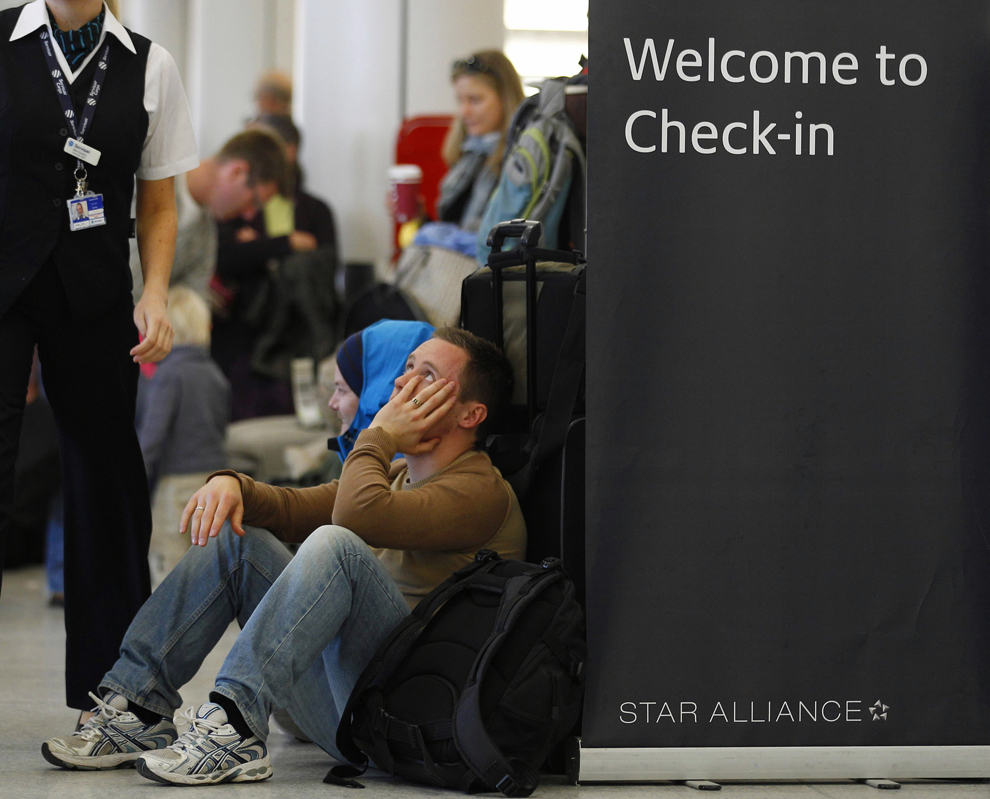 21
A passenger waits in the main terminal at Edinburgh Airport, in Scotland, May 24, 2011. Ash from an Icelandic volcano forced the cancellation of dozens of flights to and from Scotland but Ireland's Ryanair said it would protest against "unnecessary" restrictions. (David Moir/Reuters) # 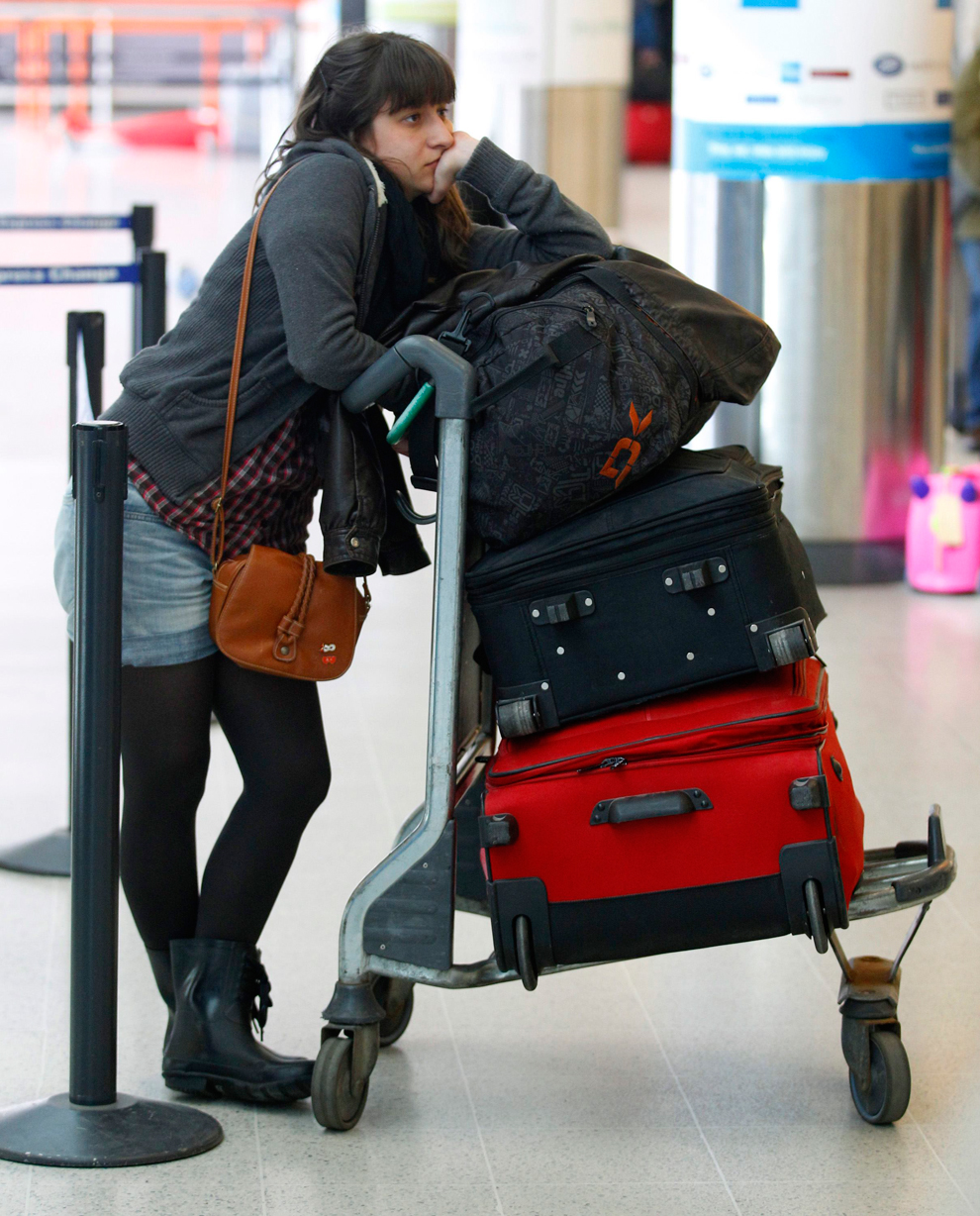 22
A woman is stranded with her luggage in the main terminal at Edinburgh Airport in Scotland, May 24, 2011. (David Moir/Reuters) # 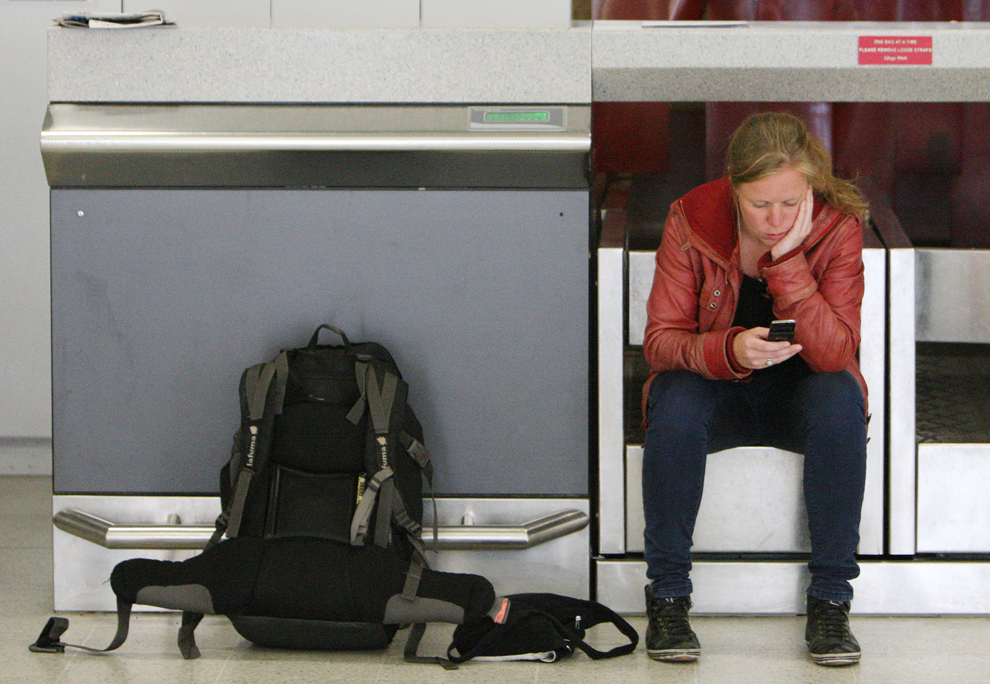 23
A passenger sits by the check in desk after flights were canceled at Edinburgh Airport in Edinburgh, May 24, 2011. (Scott HeppellAssociated Press) # 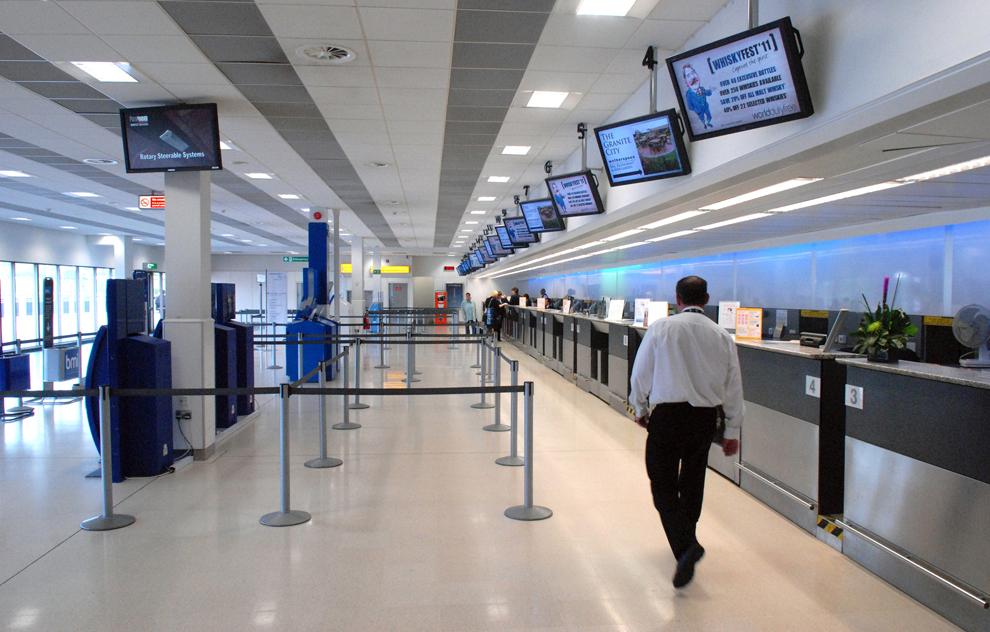 24
An empty flight Check-In area at Aberdeen Airport in Scotland, May 24, 2011, a result of a plume of ash from an erupting Icelandic volcano headed for Britain. (Scott Campbell/AFP/Getty Images) #