The three-month long conflict in Ivory Coast has entered a particularly bloody stage. Nearly 400 people have been killed in the west African country, including 32 on March 3 alone, almost all of them men who had voted for opposition leader Alassane Ouattara, according to UN figures. International groups and most nations recognized Ouattara as the legitimate leader of the country after elections late last year. But Laurent Gbagbo refuses to turn over the government and loyal forces have brutally attacked Ouattara supporters. Hundreds of civilians have fled their homes trying to avoid the clashes between the two sides. International observers fear the nation is on the verge of a civil war. -- Lloyd Young (28 photos total) 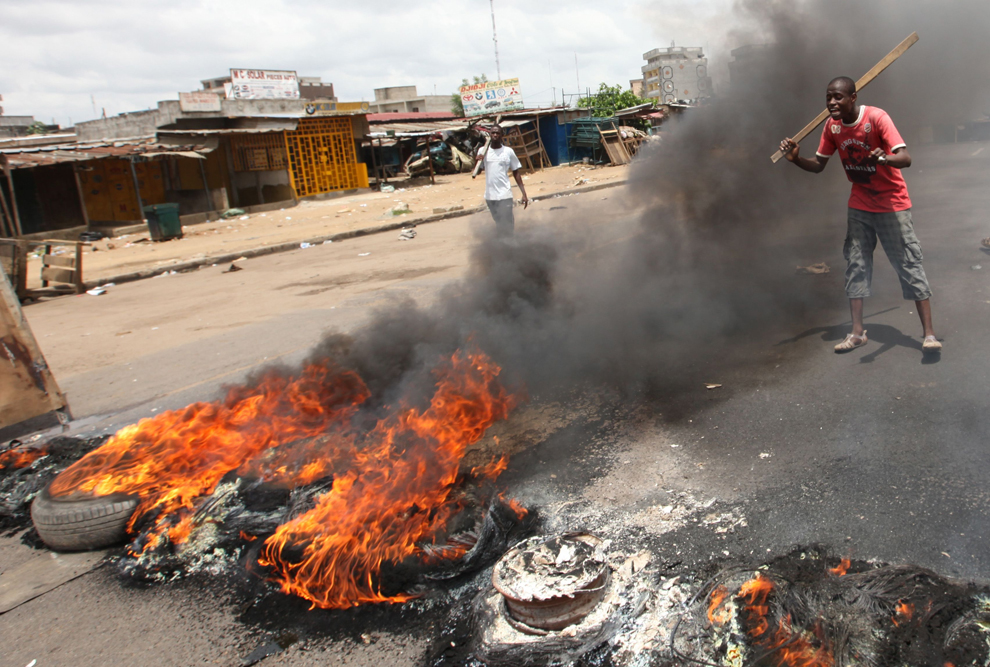 Protesters set up a fiery roadblock in the Abobo area of Abidjan March 3. Ivorian security forces and tanks, backing incumbent President Laurent Gbagbo, opened fire on a rally of hundreds of unarmed women in Abobo. Seven protesters were killed. The massacre was the latest of clashes that have erupted in the west African country since a disputed election on Nov. 28 that Alassane Ouattara won, according to international election groups, regional African organizations, and most nations. About 300 people had been killed in the violence, and there are fears of a return to civil war. (Luc Gnago/Reuters) 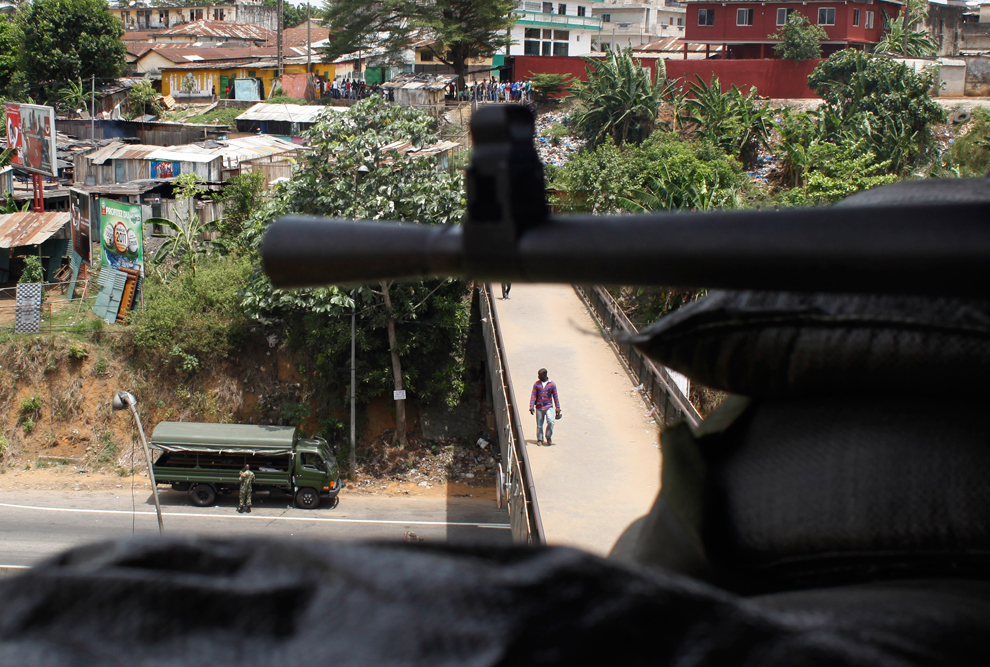 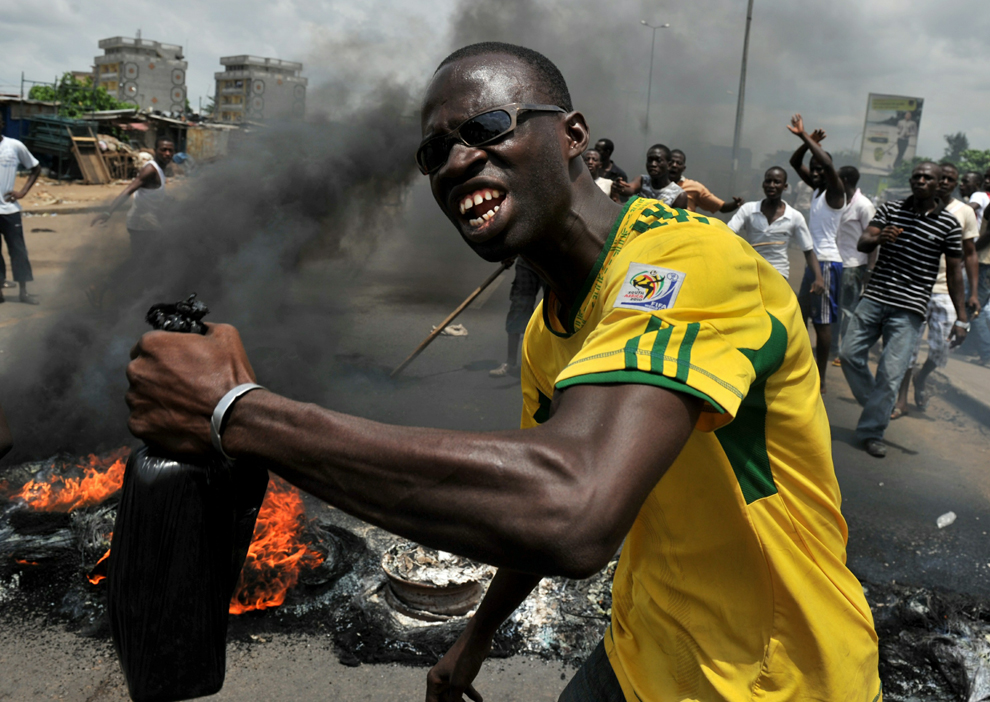 3
Residents burn tires and block the street where security forces loyal to Ivory Coast's strongman, Laurent Gbagbo, opened fire on demonstrators, killing at least seven women, on March 3 in Abobo, a working class neighborhood of Abidjan. The women were among hundreds gathered to call for the ouster of Gbagbo. (Issouf Sanogo/AFP/Getty Images) # 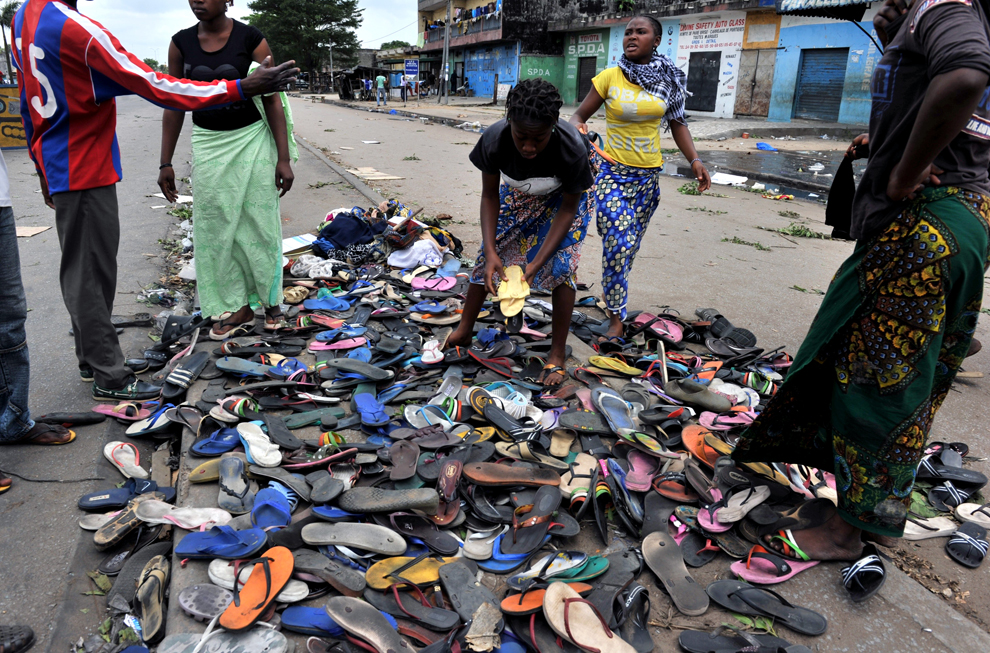 4
After forces loyal to Ivory Coast's strongman Laurent Gbagbo sprayed a rally of female demonstrators with gunfire on March 3, residents of Abobo gathered the sandals left behind by fleeing protesters. Sirah Drane, who helped organize the march, said she was holding a megaphone and preparing to address the large crowd that had gathered at a traffic circle in Abobo. "That's when we saw the tanks," she said. "There were thousands of women. And we said to ourselves, 'They won't shoot at women.' ... I heard a boom. They started spraying us. ... I tried to run and fell down. The others trampled me. Opening fire on unarmed women? It's inconceivable." (Issouf Sanogo/AFP/Getty Images) # 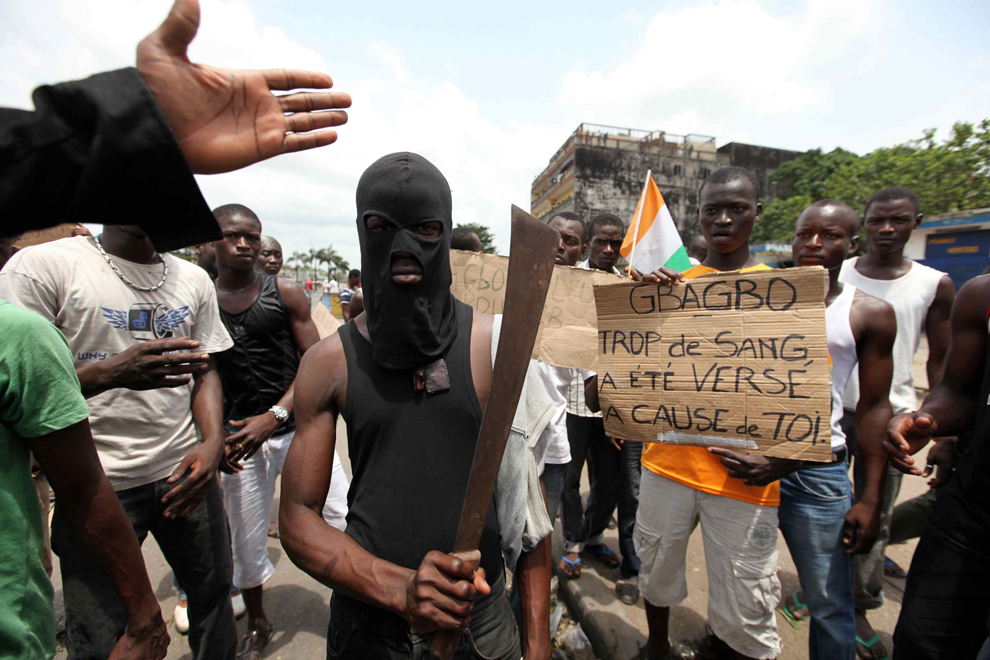 5
An anti-Gbagbo protester wields a machete during protests in the Abobo area of Abidjan March 3. The placard reads "Gbagbo - too much blood poured because of you." (Luc Gnago/Reuters) # 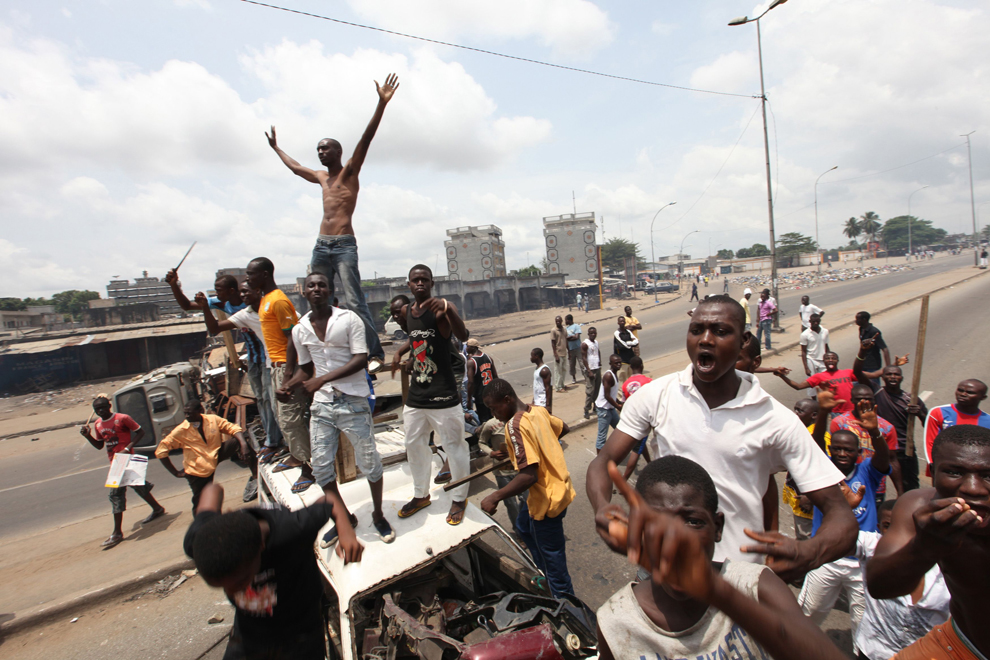 6
Protesters block a road in Abidjan on March 3. Thousands of residents of Abidjan have been fleeing the area for the past week. Witnesses say bodies are strewn over several streets and alleys. (Luc Gnago/Reuters) # 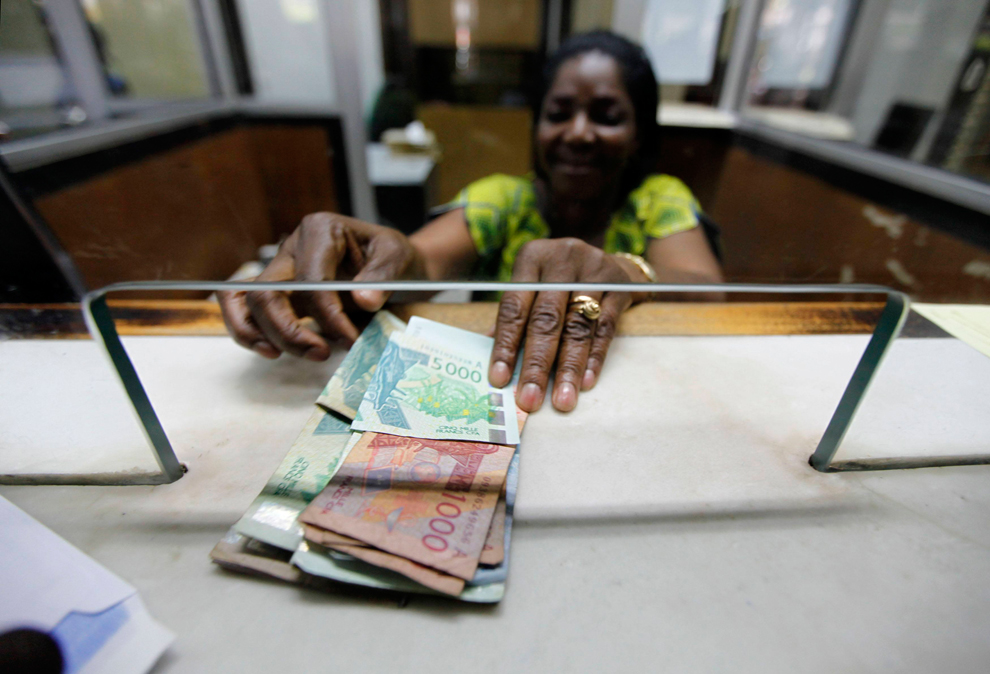 7
A cashier gives bills to a customer at French bank BICICI, now nationalized by disputed leader Laurent Gbagbo, in Abidjan, March 3. Despite debilitating international sanctions, Gbagbo has kept power by continuing to pay the salaries of soldiers and civil servants. (Thierry Gouegnon/Reuters) . # 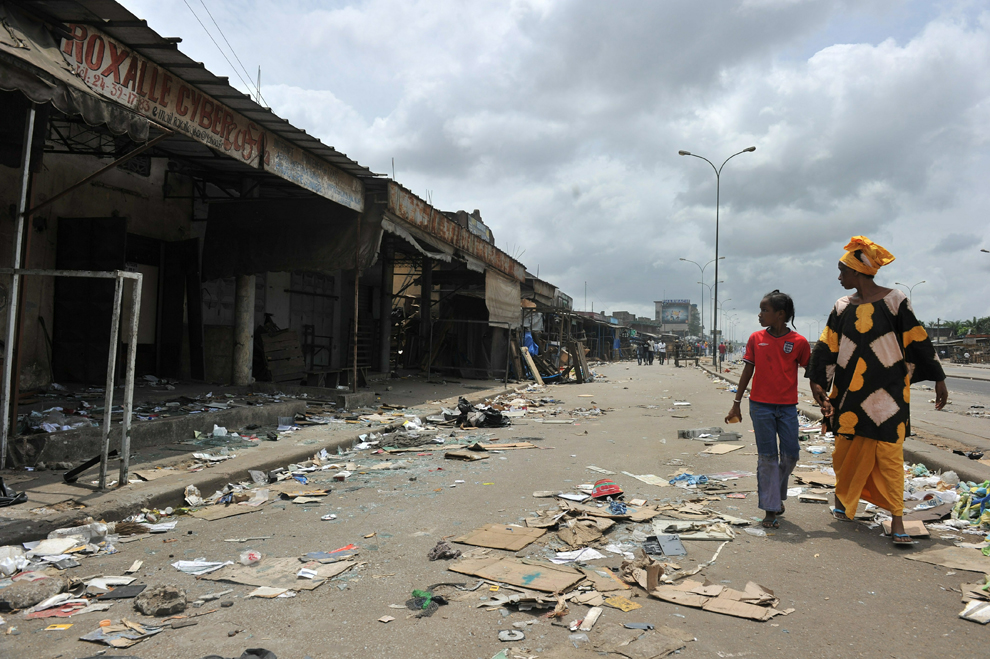 8
A woman and her daughter walk along looted shops in the Abobo district of Abidjan. The city was once the commercial mecca of the West African nation. (Issouf Sanogo/AFP/Getty Images) # 9
Karidja Cisse's kitchen was damaged by a mortar during a Saturday bombardment by government forces in Abobo. The neighborhood has been a focal point of deadly clashes for days between supporters of Alassane Ouattara and security forces loyal to Laurent Gbagbo. (Rebecca Blackwell/Associated Press)# 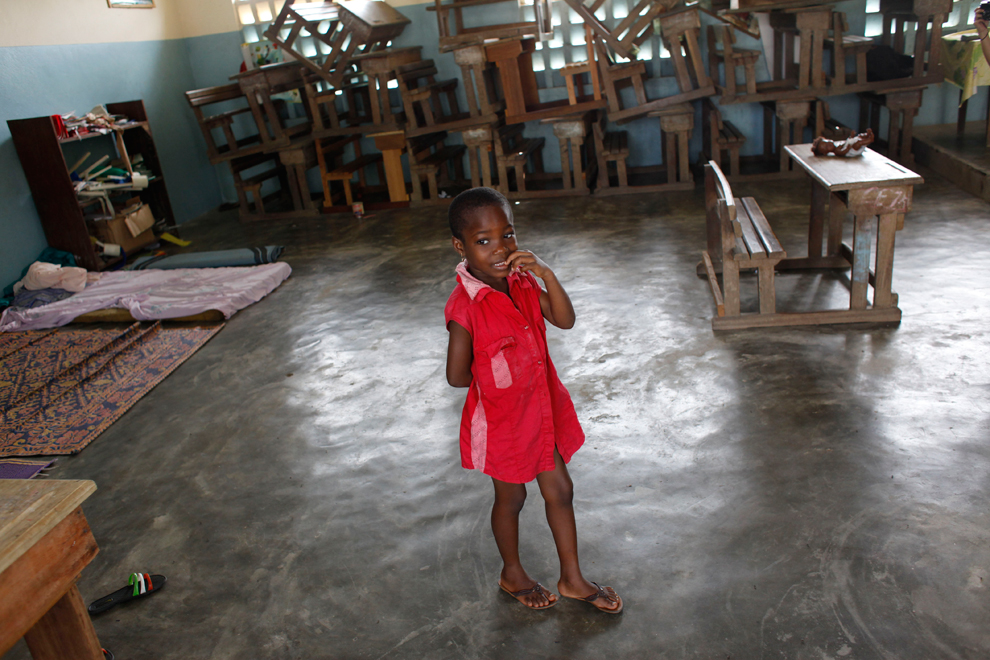 10
A girl and her family have taken refuge in a church classroom after mortar attacks hit their Abobo neighborhood. (Rebecca Blackwell/Associated Press) # 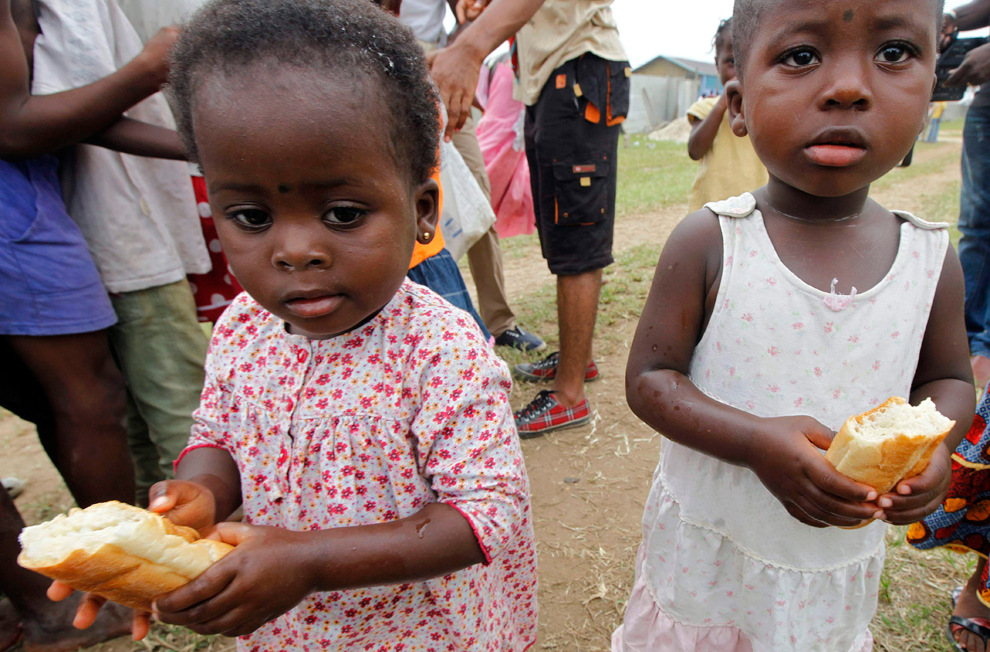 11
Refugees gather at St. Ambrose Church in Angree, a neighborhood in Abidjan, on March 1. Security in Ivory Coast is deteriorating, with gun battles between rival forces most of last week and wider hostilities resuming across a north-south ceasefire line that had been largely quiet since the 2002-3 civil war ended in stalemate. Insurgents now control most of the northern Abidjan suburb of Abobo after the clashes. (Thierry Gouegnon/Reuters) # 12
A woman bathes her child after finding shelter at St. Ambrose Church in the Angree neighborhood of Abidjan on March 1. (Thierry Gouegnon/Reuters) # 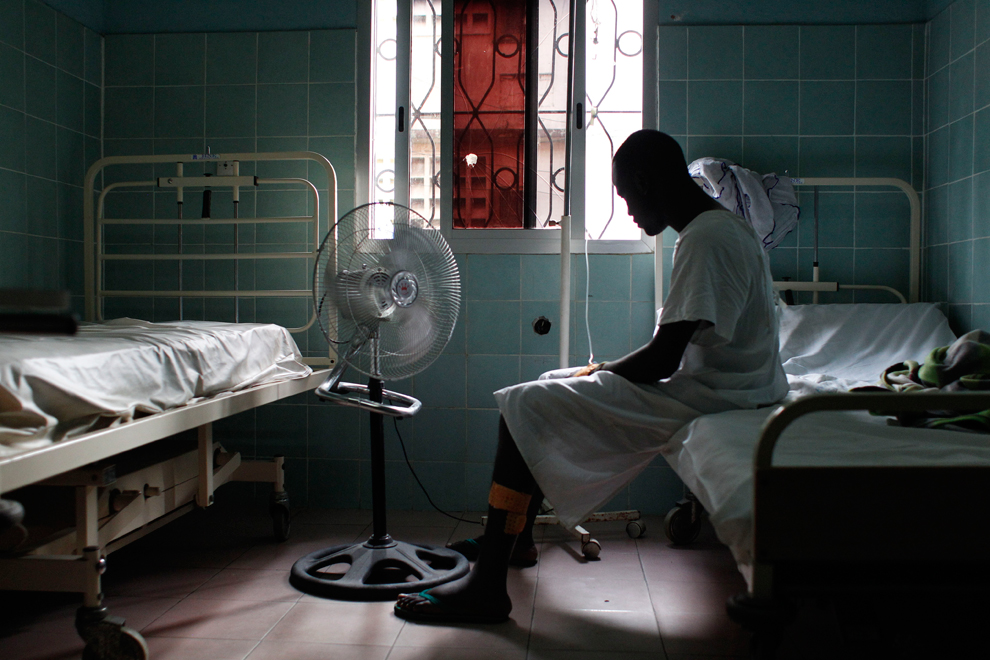 13
A young man from Abobo recovers from a gunshot wound to the thigh at a health clinic March 1. The victim, who said he was hit by random gunfire from passing government forces, and the clinic asked not to be identified due to safety concerns. The UN's refugee agency has expressed alarm about the dire conditions facing people trying to get out of the Abobo district of Abidjan after days of violence there. The standoff already has killed hundreds of Alassane Ouattara supporters, victims of targeted assassinations and "disappearances" carried out at night by security forces loyal to strongman Laurent Gbagbo.(Rebecca Blackwell/Associated Press)# 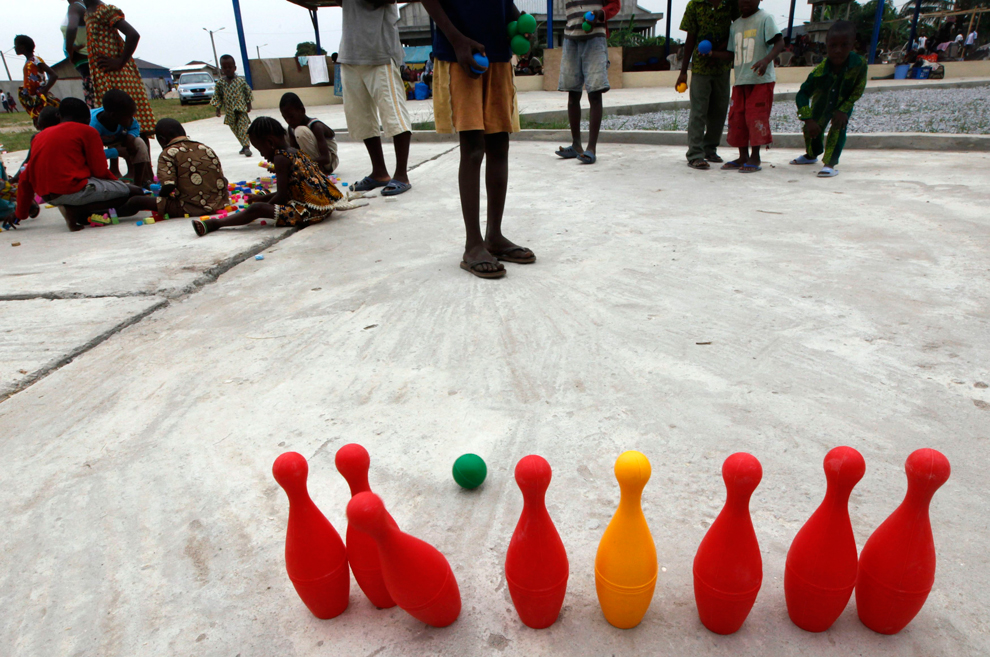 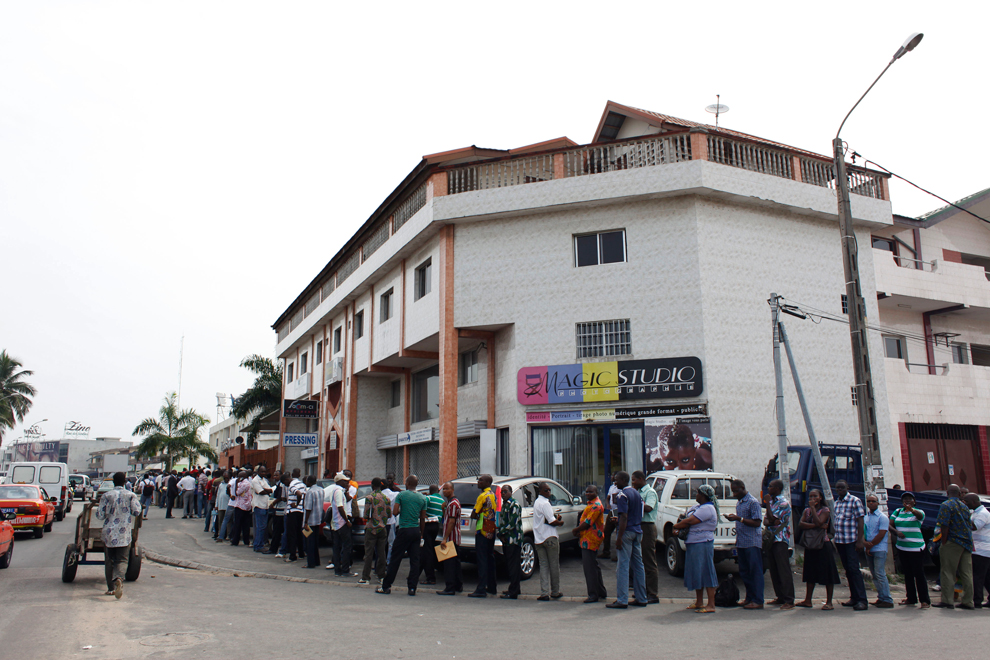 15
Hundreds of civil servants line up around a block in hopes of receiving their monthly salaries at a branch of an Ivory Coast bank, in the Deux Plateau neighborhood of Abidjan, on March 1. Amid a deepening liquidity crisis, Ivory Coast's incumbent leader is attempting to pay government salaries using local banks, after most international banks - which hold virtually all of the bank accounts for civil servants - closed two weeks ago. (Rebecca Blackwell/Associated Press) # 16
Policemen guard the headquarters of the SGBCI, the Ivorian subsidiary of France's Societe Generale, one of the two foreign banks requisitioned by strongman's Laurent Gbagbo regime in Abidjan. International leaders have condemned Gbagbo for taking control of these banks. (Issouf Sanogo/AFP/Getty Images) # 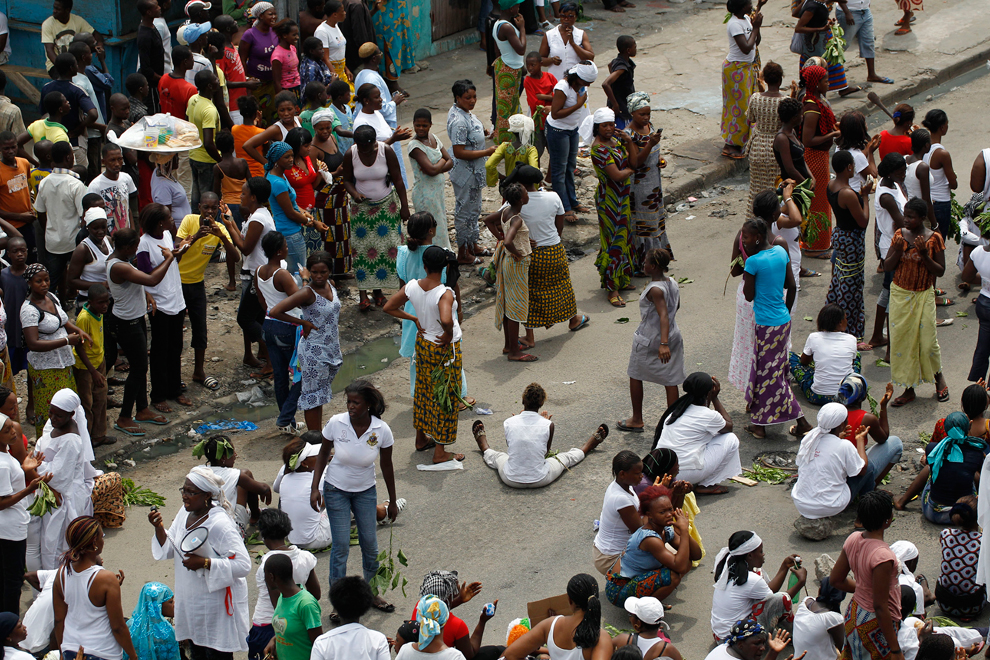 17
Women gather to rally against Laurent Gbagbo and urge him to step down in the Treichville neighborhood of Abidjan on Feb. 28. Minutes after this picture was taken, soldiers began firing to disperse the protesters. A similar attack took place in the Abobo neighborhood on March 3, when seven of the female protesters were killed. (Rebecca Blackwell/Associated Press) # 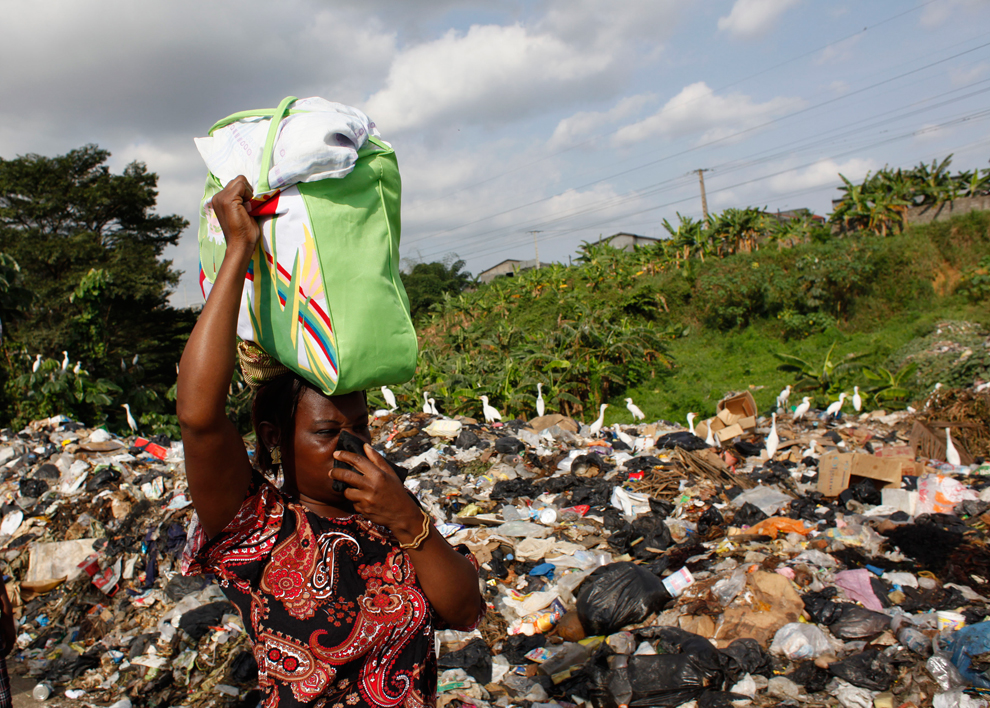 18
A woman fleeing ongoing violence in the Abobo neighborhood of Abidjan covers her nose and mouth with her scarf as she walks out of the district past heaps of rotting trash on Feb. 27. Since the start of the political crisis three months ago, trash has been piling up around the city. (Rebecca Blackwell/Associated Press) # 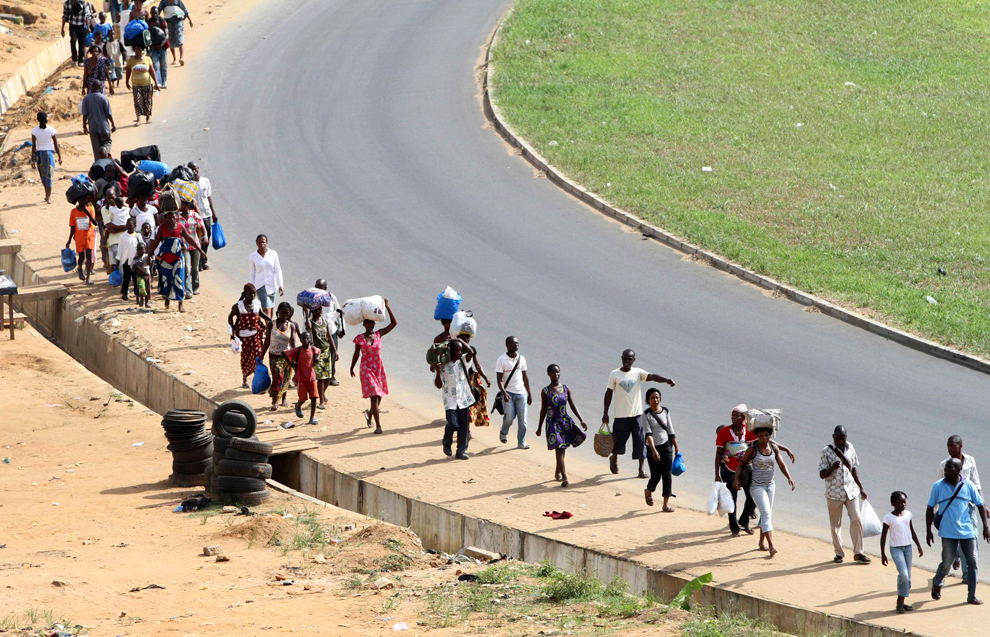 19
Residents flee with their belongings after clashes between forces loyal to incumbent president Laurent Gbagbo and his rival Alassane Ouattara in Abobo in Abidjan Feb. 25. Gun battles and explosions raged overnight in an Abidjan neighborhood, residents said, where insurgents the local press are calling the "invisible commandos" have risen up against Gbagbo. (Luc Gnago/Reuters) # 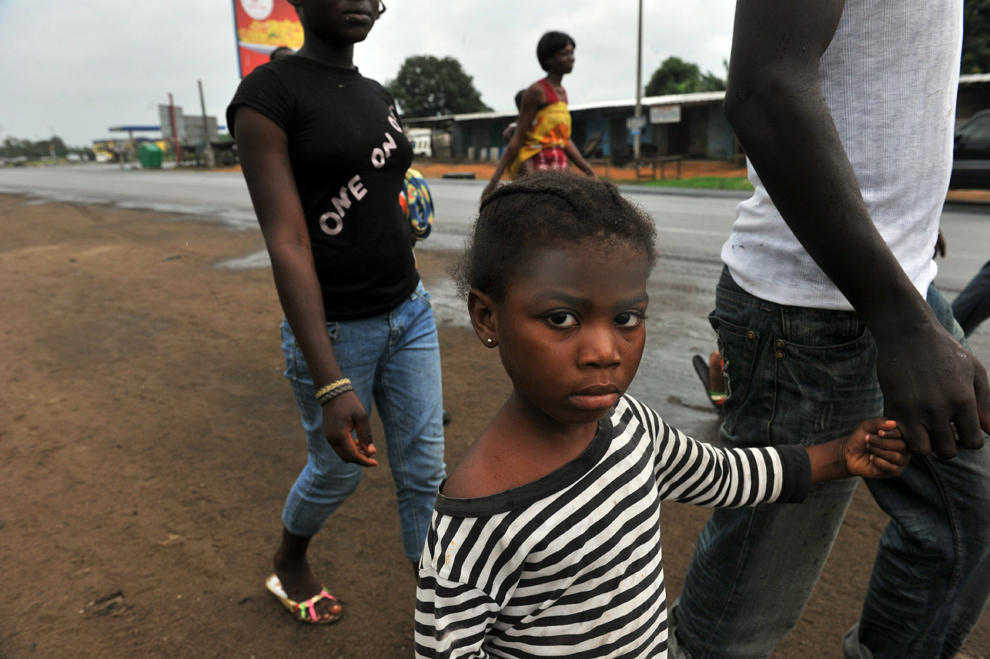 20
Families flee from the Abobo district of Abidjan on Feb. 23, a day after 10 troops loyal to Laurent Gbagbo were killed in clashes with unidentified gunmen in the working class district -- a rebel stronghold -- according to a security source. (Issouf Sanogo/AFP/Getty Images) # 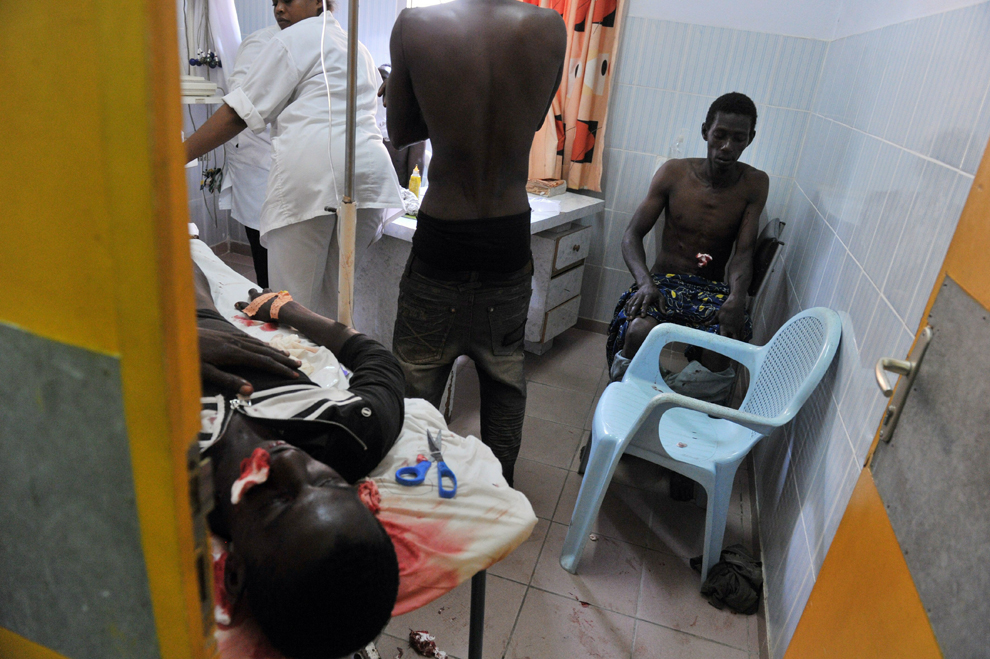 21
Wounded civilians wait for treatment at a clinic in Abidjan on Feb. 21. A man crossing the road in the Treichville district was shot dead when the security forces opened fire to disperse young supporters of Alassane Ouattara, residents said. A dozen injured people, some with bullet wounds, were admitted to a private Treichville clinic. (Issouf Sanogo/AFP/Getty Images) # 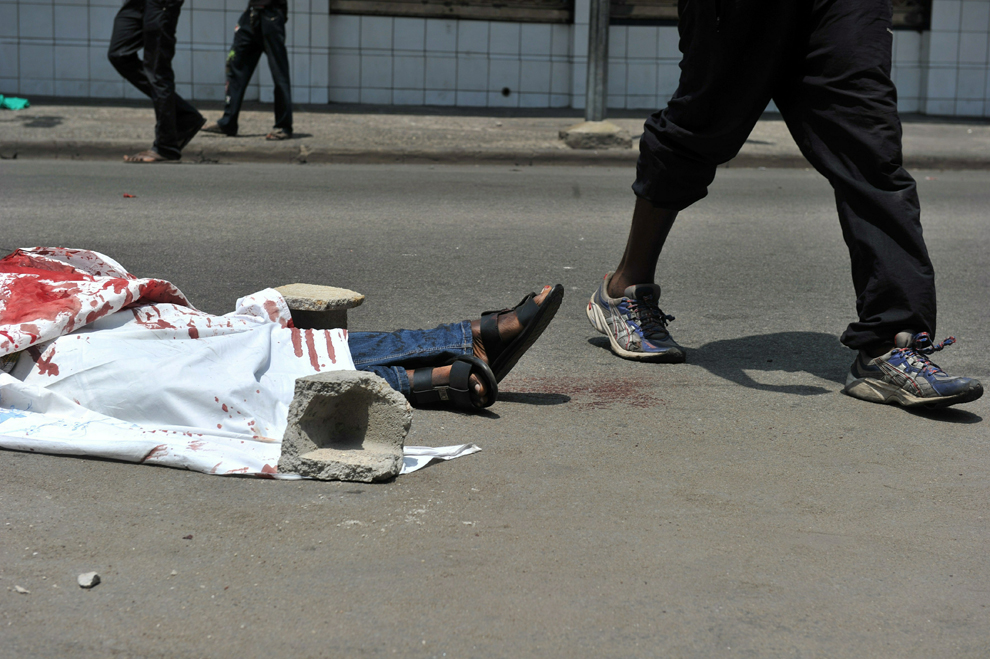 22
A civilian died in the streets of Treichville in Abidjan, a victim of clashes between forces loyal to President Laurent Gbagbo and supporters of his rival, Alassane Ouattara. Security Forces had opened fire to disperse young supporters of Ouattara who had made barricades of tables and burning tires, residents said. (Issouf Sanogo/AFP/Getty Images) # 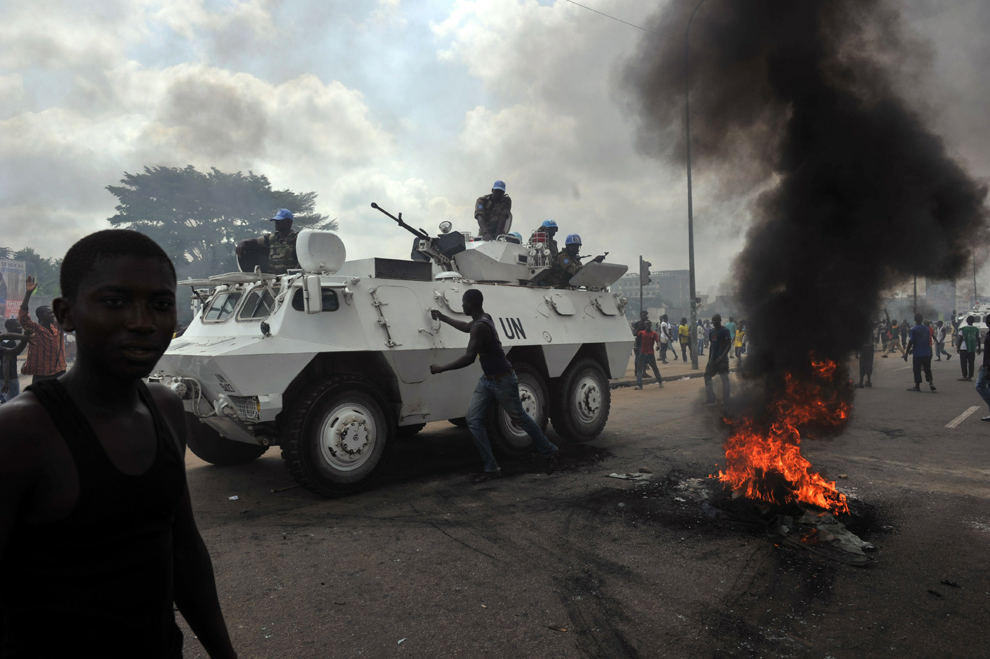 23
UN peacekeepers drive past supporters of Alassane Ouattara as they demonstrate and burn tires in the Abobo neighborhood in Abidjan on Feb. 19. The International Crisis Group said, a Belgian watchdog organization, said another civil war in Ivory Coast, involving widespread violence against civilians, is the "most likely scenario in the coming months." (Issouf Sanogo/AFP/Getty Images) # 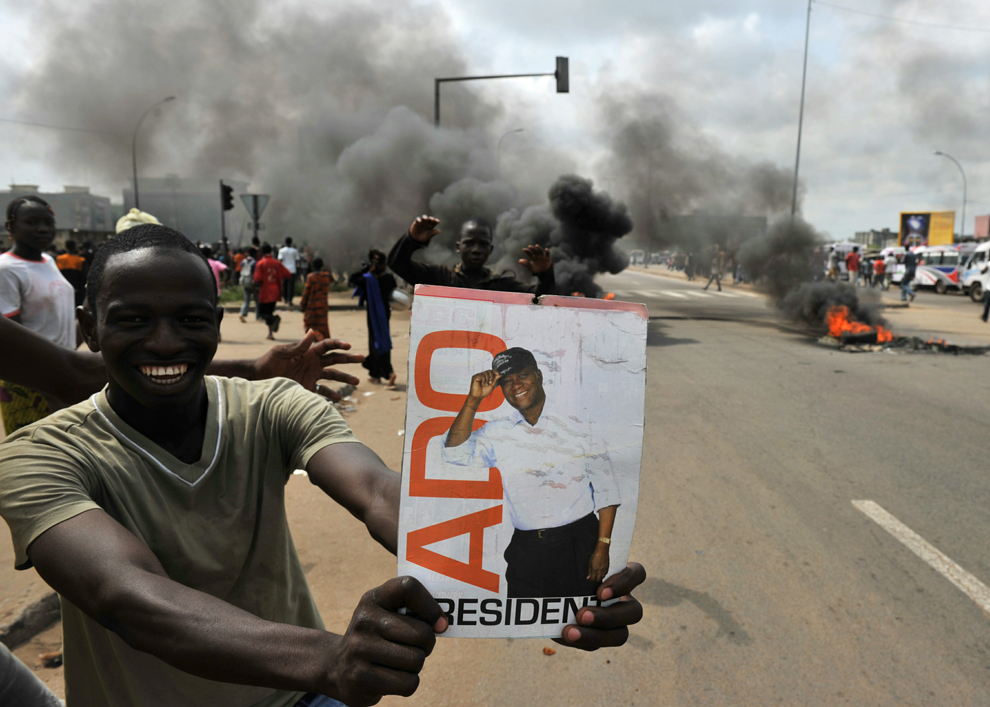 24
Supporters of Alassane Ouattara take part in a demonstration in the Abobo neighborhood in Abidjan on Feb. 19. (Issouf Sanogo/AFP/Getty Images) # 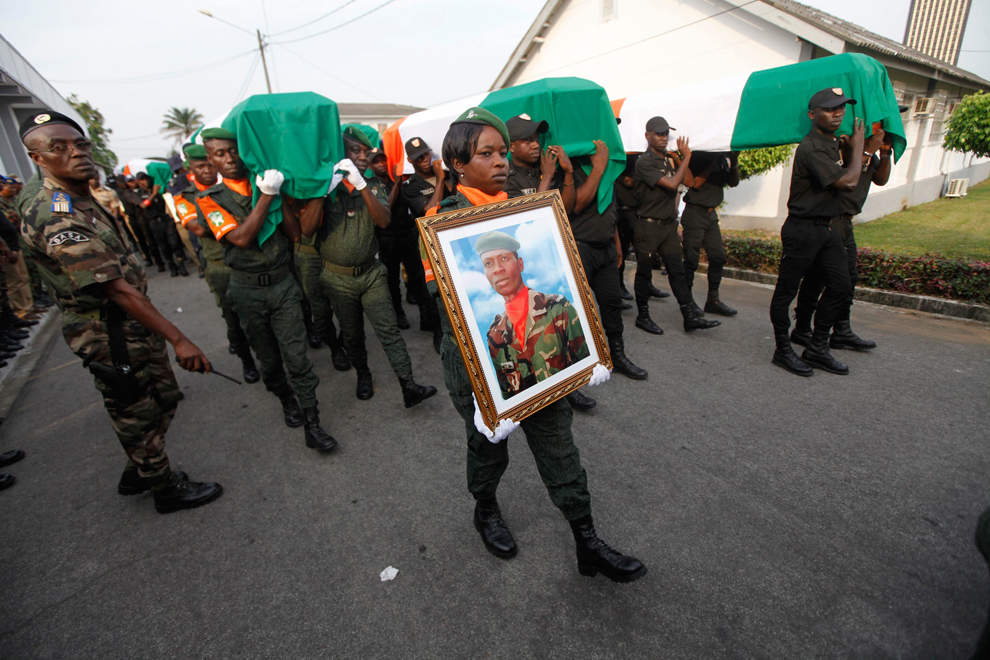 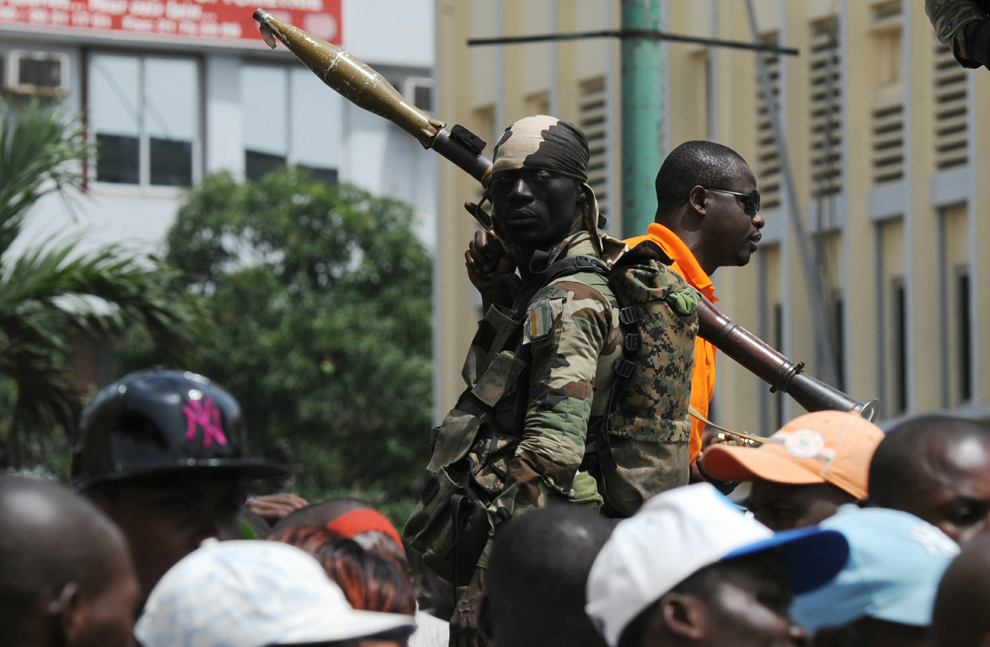 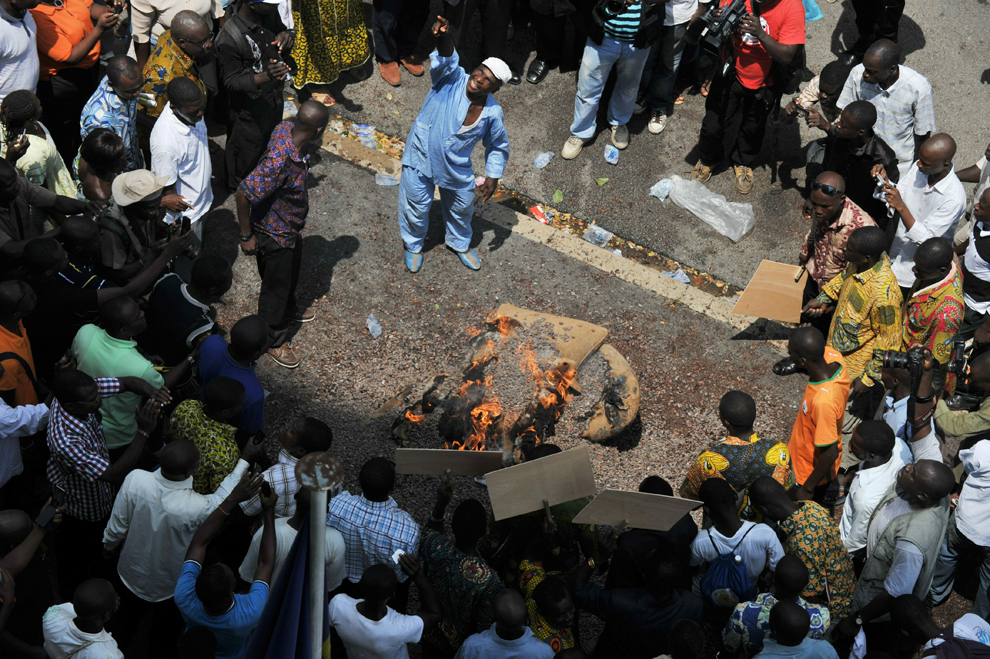 27
Cocoa growers burn cocoa beans in front of European Union offices in Abidjan on Feb. 17 to protest against sanctions imposed on their business in a bid to increase pressure on Laurent Gbagbo. The EU has imposed a series of sanctions targeting Gbagbo that extend to the main ports of Abidjan and San Pedro, vital to the cocoa-export trade in the world's top cocoa-producing country. (Issouf Sanogo/AFP/Getty Images) # 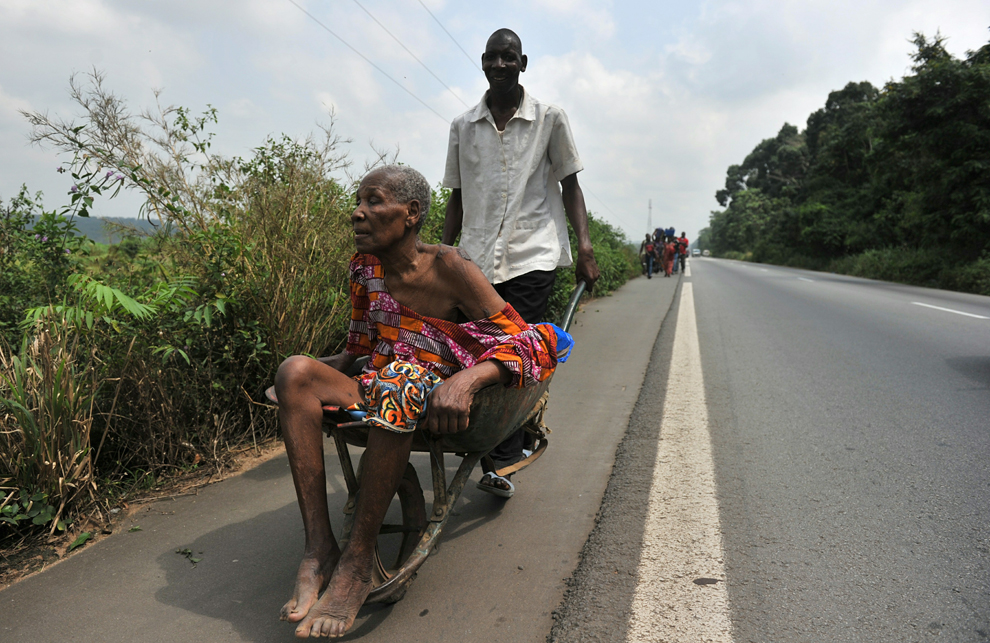 28
A man and an elderly woman in a wheelbarrow flee Abobo, a district of Abidjan, on Feb. 24. (Issouf Sanogo/AFP/Getty Images) #